A Ballad for the Wolves

Ever heard a ballad that keeps wolves away?
No?
Here is one for you:

“Garland brought from Rameshwar,
Worn by the woman, shower blessings,
Love-Kush born in the cottage of the saint,
Please tell from where they were born woman”

It may not sound like it will keep wolves away, but the Gurjar shepherds of Kailadevi Wildlife Sanctuary (KWLS) have crooned ballads like this for decades to protect their sheep and goats from being predated by wolves.

Known as rasiyas in Rajasthan, these songs describe mythological stories of Hindu gods and goddesses and are sung aloud by shepherds while they tend their flocks. Their voices scare the wolves (and other carnivores) away. For the song to be effective, they place their right index finger on their right ear to produce a loud, deep and shrill blare. And of course, singing these uplifting tunes keeps them entertained as they travel far and wide in search of grazing lands for their livestock. If another shepherd is herding and singing nearby, a herder can afford to relax, as he knows that the wolves will not approach his flock as long as the other shepherd sings. 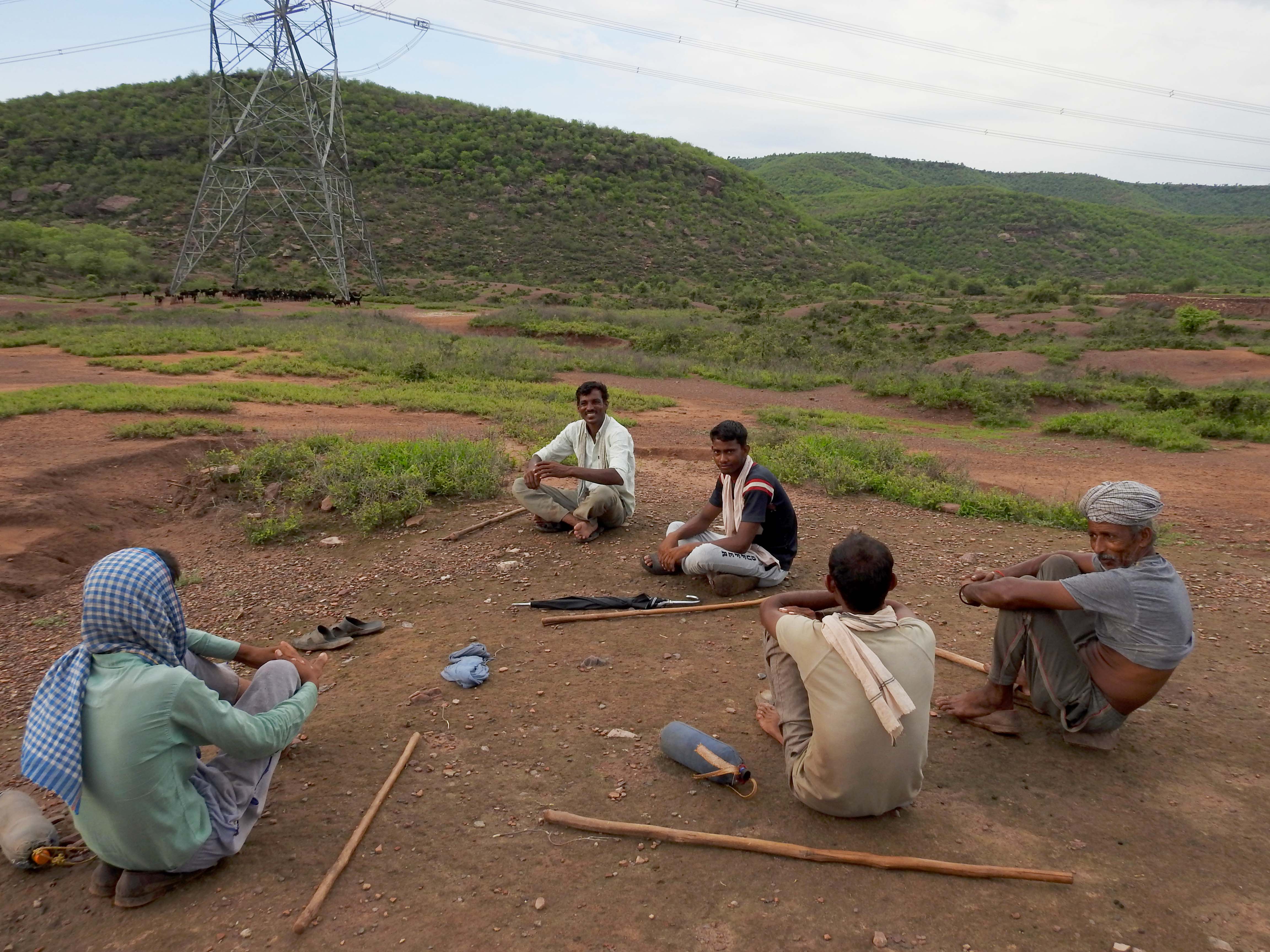 Singing ballads is an age-old tradition of the Gurjar shepherds of Kailadevi Wildlife Sanctuary, to protect their sheep and goats from wolf attacks and to keep themselves entertained during long days in the grazing fields. Photo: Prashant Mahajan.

The wolf is a top predator in the semi-arid areas of India and plays a significant role in maintaining the integrity of the ecosystem it inhabits. It is often described as a “keystone species”. Spread over an area of 672.82 sq. km. Kailadevi Wildlife Sanctuary is highly degraded because of heavy grazing from a large number of livestock. About sixty villages are located inside the sanctuary, and their residents depend upon the forest. The low density of wild prey in these forests makes the wolves of this area dependent upon livestock. The major threat to surviving wolf populations in Kailadevi, and many other areas in India, is the loss and degradation of habitat, resulting in the depletion of natural prey densities and absence of appropriate denning and rendezvous sites.

According to the shepherds, wolves are more responsible for killing livestock than any other predator. In Kailadevi, the majority of the wolf’s diet comprises sheep, goats or calves. Even though shepherds guard their flock and sing their ballads, wolves still manage to kill livestock occasionally. The Forest Department’s compensation scheme, of which most shepherds in the region are not aware, involves complex documentation. The few shepherds who know of it find the process quite arduous and hence, do not apply. As it is, wolves generally take prey that can be easily dragged to places far away from the actual site of the kill. It is difficult to retrieve such carcasses and usually the prey is consumed within a few hours by the pack. It is therefore difficult to evidence loss and seek compensation at all. 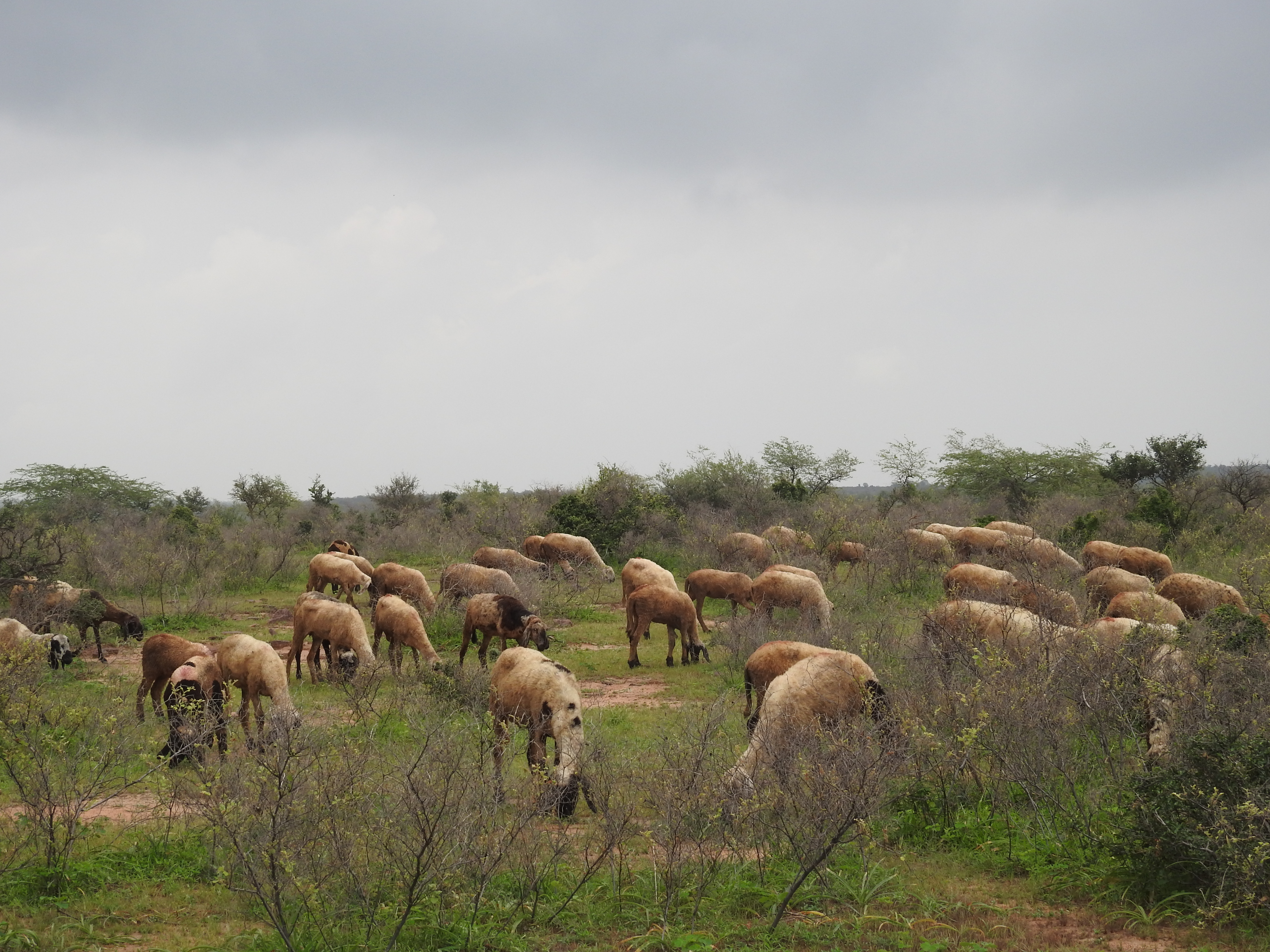 The low density of wild prey, due to habitat degradation, makes the wolves of this area dependent upon livestock. Photo: Prashant Mahajan.

To assess the economic loss to the villagers and to understand their perception of wolves, we conducted questionnaire surveys across 442 of the 3,353 households in the region. We found that, on an average, they lost around 943 heads of livestock in a year, which is valued to be around Rs. 50 lakhs; and that was only for the 15 per cent of the households that we sampled. If we extrapolate for every household in the sanctuary, then the total livestock loss in a year would be around 7,252, a value of three crore rupees!

Based on our results we formulated a conservation plan, suggesting scientific interventions such as proper management of wolf occupied habitats, efficient livestock compensation schemes, better livestock husbandry practices, management of feral dogs inside the sanctuary and a community-based approach to sensitise the people of KWLS about the species. 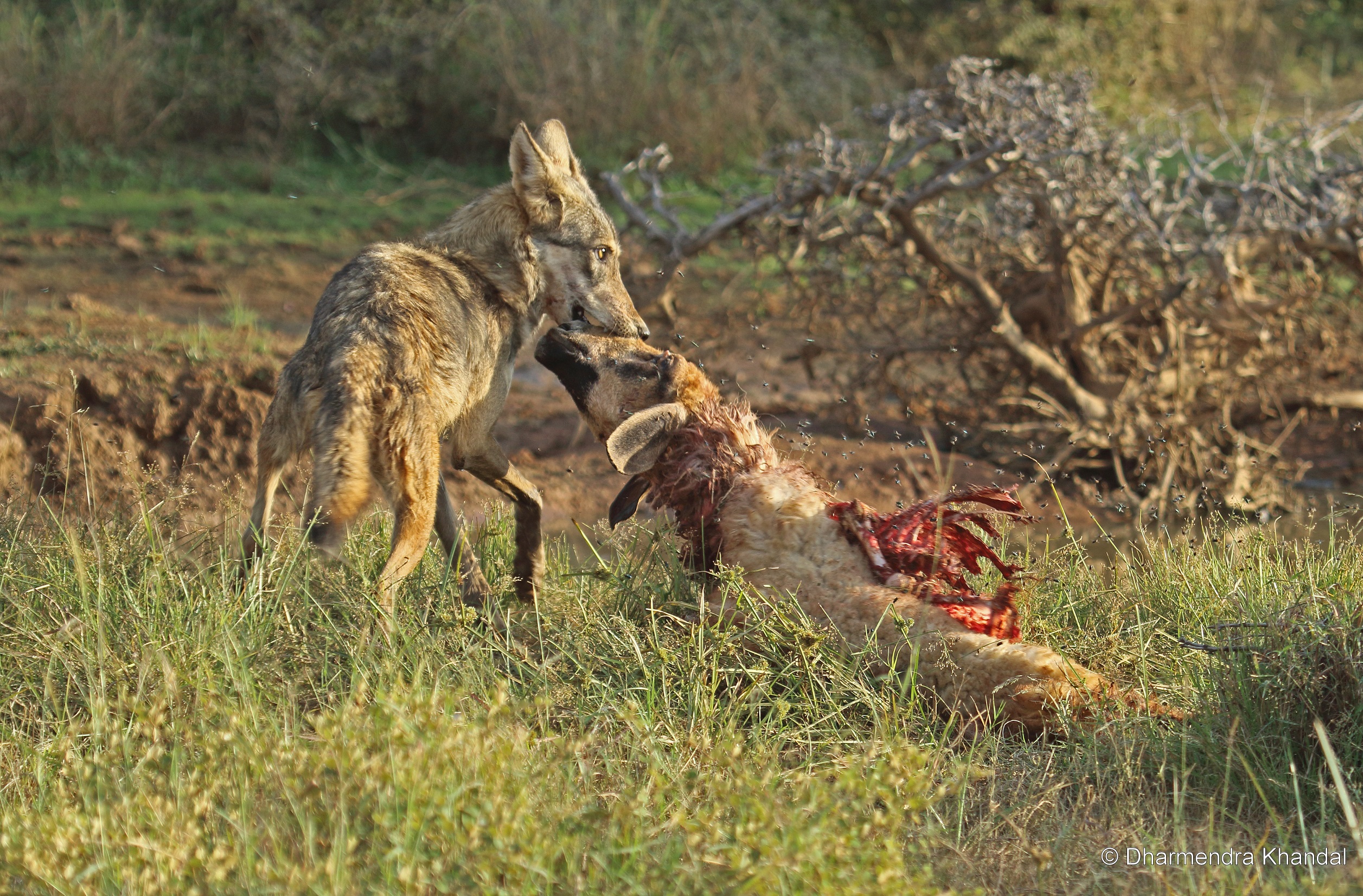 A survey across 15 per cent of the villages in the KWLS revealed that they lost around 943 heads of livestock in a year to wolf attacks. Photo: Dharmendra Khandal.

Despite the loss of livestock, the shepherds are quite tolerant towards wolves and are aware that less wild prey availability is forcing them to prey on livestock to survive. However, this sympathetic attitude may not last long if their woes are not compensated for. An efficient livestock compensation scheme to reduce the shepherds’ burden and to prevent any persecution or retaliation on wolves could go a long way in mitigating the conflict. Additionally, there can be awareness and outreach for local communities through educational programmes. Perceptions about wolves are often exaggerated, and an education programme can address this by delivering information and increasing peoples’ tolerance and appreciation of wolves through talks, workbooks, games and presentations. Furthermore, building-up a strategic action plan with clear objectives, and implementation of guidelines, and monitoring and evaluation criteria for the sanctuary can help protect this species. 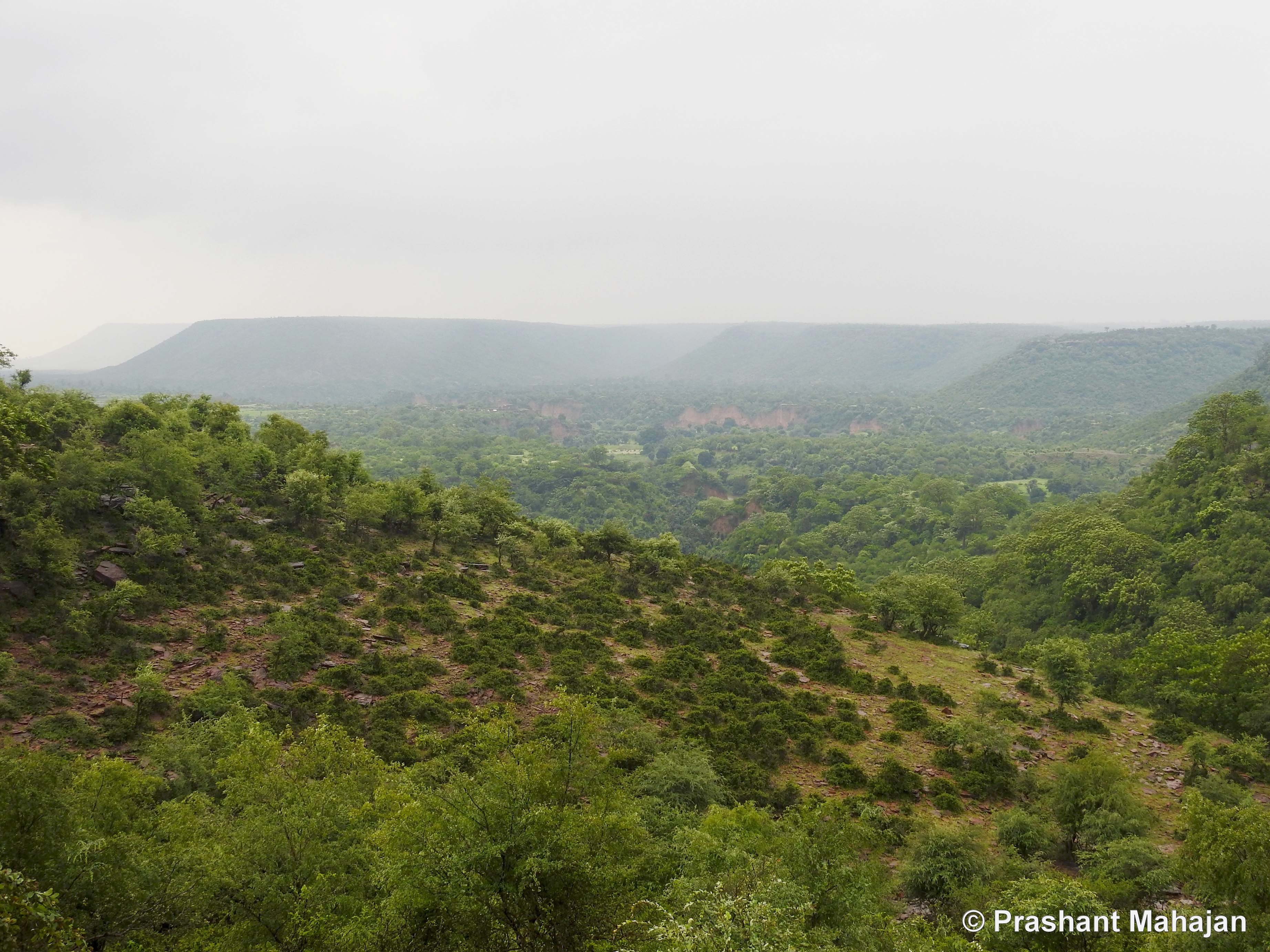 Community awareness programmes and habitat conservation measures are the need of the hour to ensure the longevity of the wolf, and the ballads, in the vast scrubland landscape of Kailadevi sanctuary. Photo: Prashant Mahajan.

Kailadevi Wildlife Sanctuary, with its open scrub forest, makes the perfect habitat for canid species, and the sanctuary has the potential to serve as one of the major sites for the wolf in India. Therefore, we used ‘occupancy models’ to assess habitat-use by wolves. Occupancy modelling shifts the focus from the individual animal to a site, while accounting for detection probability. To assess site occupancy by wolves, we used sign-based occupancy surveys that rely on data collected from adjacent sampling sites (replicates). The habitat-use was assessed across 672.82 sq. km., surveying 48 grid cells, each measuring 14.4 sq. km. Data on wolf signs was analysed using likelihood-based habitat occupancy models. Estimated habitat-use was found to be 0.81 (±0.28). Our findings suggest that availability of water, scrubland, agriculture, wild prey (nilgai and chinkara) and domestic prey (sheep and goat) has a positive effect while forest cover has a negative effect on the habitat-use of wolves. If appropriate conservation and awareness measures are implemented in the right earnest, wolves and humans will be able to coexist in Kailadevi Wildlife Sanctuary for a long time to come. This way we can ensure that both the wolves and the ballads of this sparse but beautiful landscape never die.

Prashant Mahajan holds a Master’s degree in Wildlife Sciences from Aligarh Muslim University, and is a graduate in Zoology from Delhi University. He has worked on the ecology of wolves in Rajasthan and was a part of the research team of the “All India Tiger Monitoring” project with the Wildlife Institute of India. Currently, he is a Project Fellow at WII. His primary area of interest lies in human-wildlife conflict, prey-predator interactions and large carnivore ecology. A wildlife enthusiast who often expresses his field visit experiences through his writing and his blog, he has been published in several wildlife and conservation magazines.