It was a drizzly wet afternoon in July 2008 when I saw my first Ibisbill. It was a surprisingly easy sighting with little effort on my part. A bird so unique that it is the only one in its family, Ibidorhynchidae! I had just gotten off the bus in Pahalgam and fortuitously decided to take a stroll by the river across a road. The bird walked boldly, amidst garbage, allowing close approach. I stood watching and photographing it for a long time, despite the dim light of the cloudy day. Most birders only dream of catching a glimpse of this species, known to frequent high-altitude inaccessible Himalayan riverine habitats. It was a special moment and I considered myself blessed. Little did I realise then that this was only the first of many magical moments Kashmir would manifest for me. 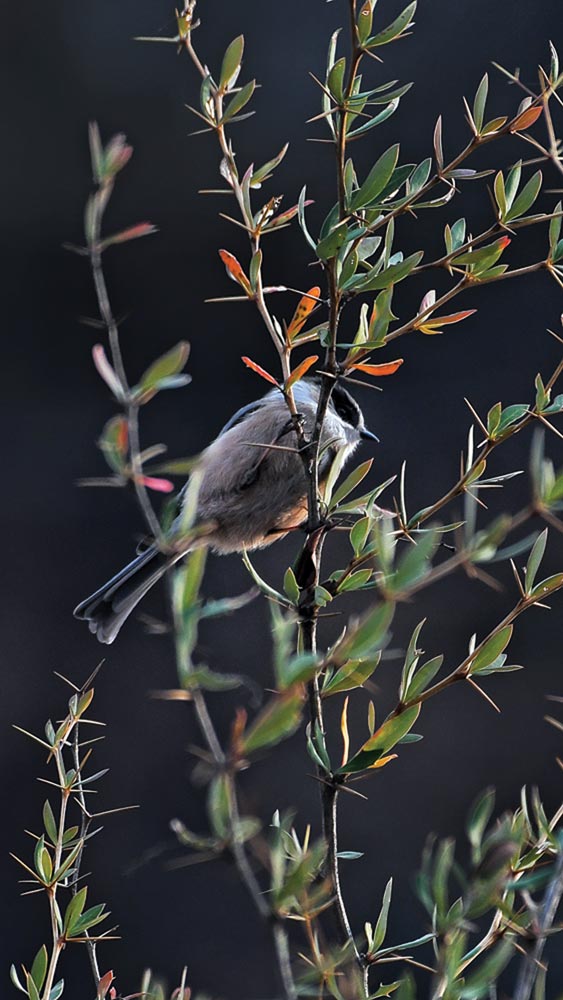 The White-throated Bushtit, identified by its white forehead and throat, is usually found along forest edges and in alpine scrub in parts of India, Pakistan and Nepal. Photo: Ovais Shafi.

Anyone who knows me knows that on my solo trips, I rarely choose to visit the usual areas popular with tourists. But this trip was different. I was on a tour of Jammu and Kashmir… a pilgrimage to Vaishnodevi with my family. However, I did manage to grab time off for birding. And I found avians everywhere. Watching a Monal, Bushtit, or Leaf Warbler while trekking up the temple route as the sun dawned took my mind off the monotony of walking the paved path for hours as part of a crowd. Visiting tourist sites such as Dal Lake, Nishat, Nigeen, the Botanical Garden, Patni Top, Sonamarg, Gulmarg glacier and others suddenly became even more attractive as I managed to tick off birds I had always wanted to see. Not surprisingly, some of these popular haunts are actually great birding sites for a fair number of target species.

I have seen the Ibisbill often post that visit, mainly in the now Union Territory of Ladakh, but the species breeds in other parts of J&K as well. One of the easiest areas to see the bird is on the spectacular, very picturesque Srinagar-Leh Highway. While searching for the Ibisbill, I greatly enjoyed watching Redstarts, Forktails and even found some nests of Dippers along Himalayan rivers. 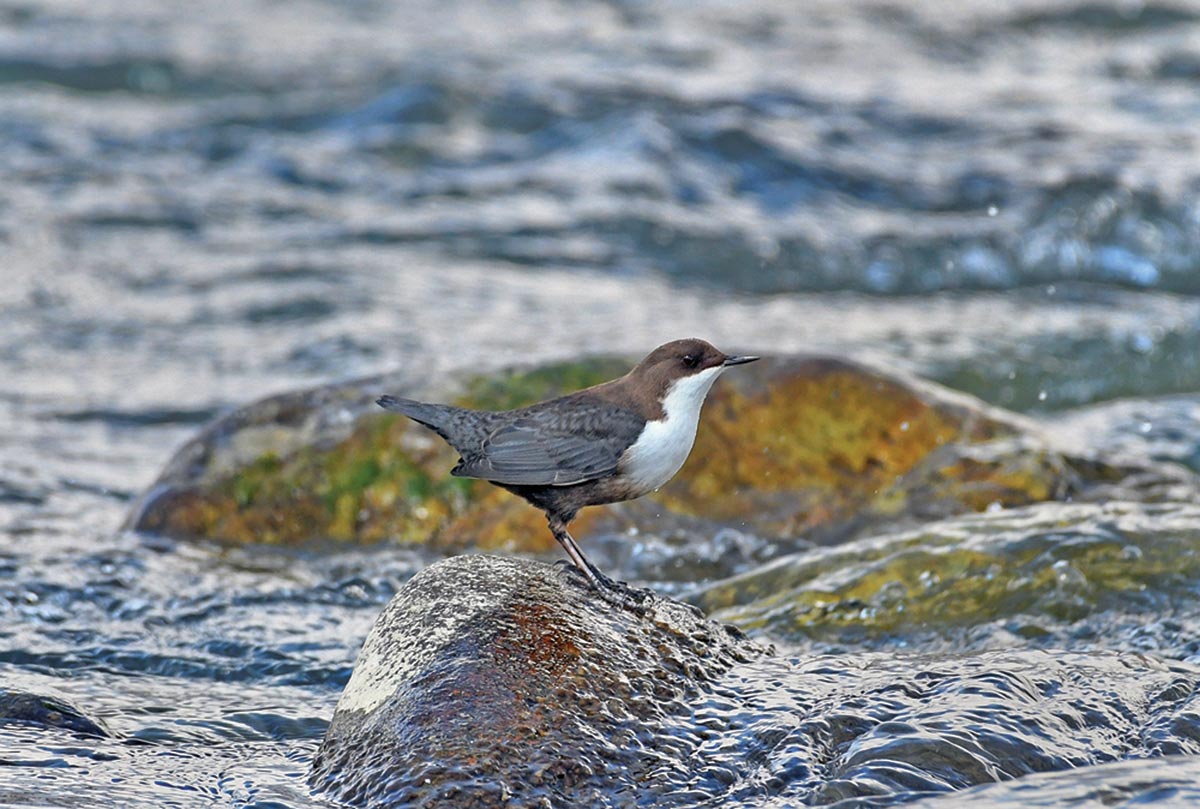 A plump little grey bird found along moving streams and rivers, the White-throated Dipper loves to catch prey by taking a ‘dip’ in the waters. The author found nests of this bird along Himalayan river banks. Photo: Rouf Ahmad Rather.

If there is heaven on Earth…

The special geography and topography of the region give rise to unique climatic conditions. The valley is like a large bowl shaped by tectonic activity and the draining of massive waterbodies millions of years ago. While Jammu is largely situated along the Shivalik hills, the valley is surrounded by the Karakoram and Zanskar ranges in the north, and Pir Panjal in the west and south. Ensuring drainage for glaciers has not only made these lands fertile for large swathes of subtropical and temperate forests but also created several lakes in the valley. The lower hill ranges and river basins in Jammu too have some special habitats. Such waterbodies are home for residents, and also serve as staging areas for varied species of waterfowl in the winter. This is an ecologically vital part of the Central Asian Flyway.

Over the years, I have travelled to this exquisite region several times. As special as the Ibisbill is, there are other species that can find their way into becoming your top targets in J&K. Highlights of birding here include the Kashmir Flycatcher, easily seen around Srinagar in the Dachigam National Park and the Zabarwan Hills. Its song is hard to miss in the month of June on the Shankaracharya Hill along with that of Rusty-tailed Flycatchers. The Kashmir Flycatcher also breeds in the amazing Aru Valley. This species winters in Sri Lanka and a few spots in the southern Western Ghats, only to miraculously return to Kashmir in summer. In recent years, very few convincing records have been found on its passage through peninsular India. Another highlight for me is the Orange Bullfinch, quite high on the wish list of birders worldwide and arguably one of the must-see birds of Kashmir. Only found from northern Pakistan and mentioned in a few, mostly old, records from Himachal Pradesh, the bird is patchily distributed throughout this part of the country. It breeds at high altitudes and can best be seen when wintering in Srinagar in the Zabarwan Hills when it descends to forage on the slopes, in small flocks. It is quite poorly known on account of its restricted range. 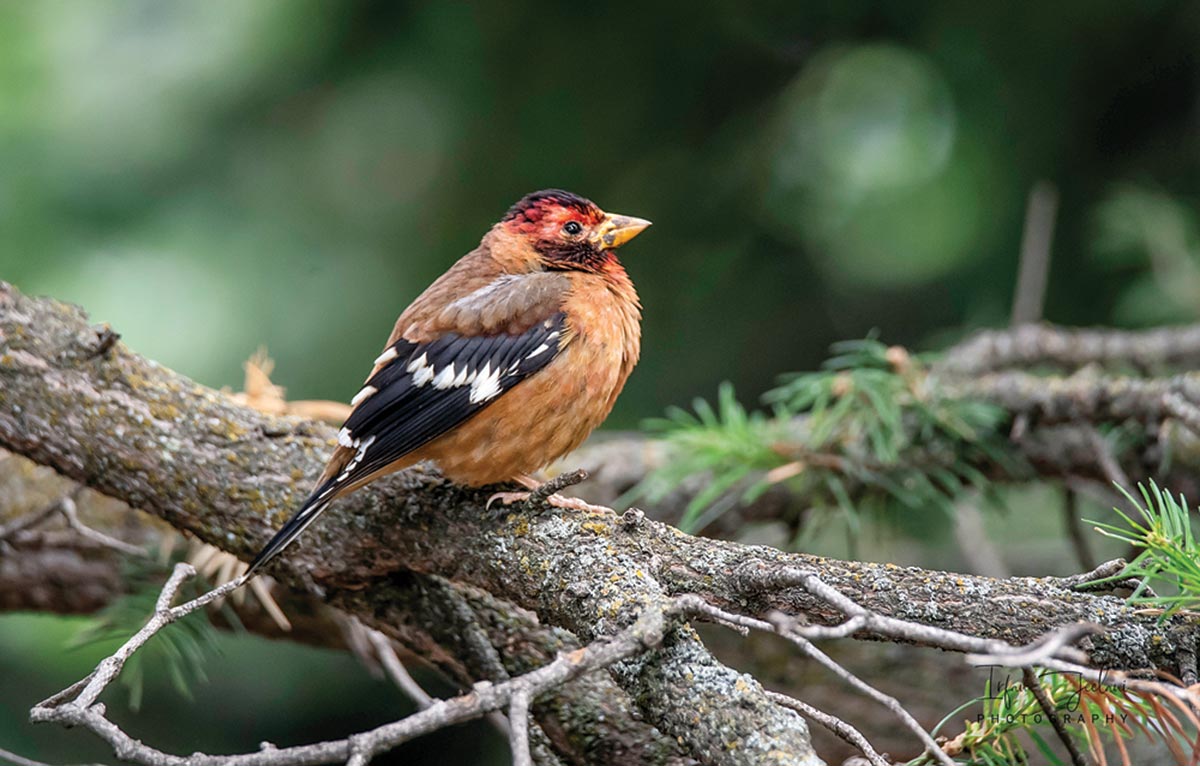 With its brownish coat and white wingbars, the Spectacled Finch is endemic to the western Himalaya. It prefers to breed in mountain forests and moves to lower altitudes in winter. The author suggests visiting Dachigam, Aru or Sonamarg to spot this species. Photo: Irfan Jeelani.

The Spectacled Finch also makes it to the list for reasons similar to that of the Bullfinch. Quite elusive and poorly known, this high-altitude breeder occasionally moves to lower altitudes depending on the snow. Largely range-restricted, it is endemic to the western Himalaya. Birders could try their luck with this species in Dachigam, Aru or Sonamarg. Two other favourites are the Kashmir Nutcracker and the Kashmir Nuthatch. Both can be relatively easily seen at Gulmarg, Sonamarg or Yusmarg. Yusmarg is a preferred birding haunt as it is less crowded. Both species have a similar distribution in the valley.

In winter, certain species, which have large European and Central Asian distributions, can be seen in and around the valley. These include some Buntings and Finches such as the Brambling, Chaffinch, Pine Bunting or Yellowhammer. Similarly, waterbodies such as Hokersar, Pampore or Wular welcome thousands of waterfowl, with special appearances of vagrant species such as swans or the occasional Goldeneye. 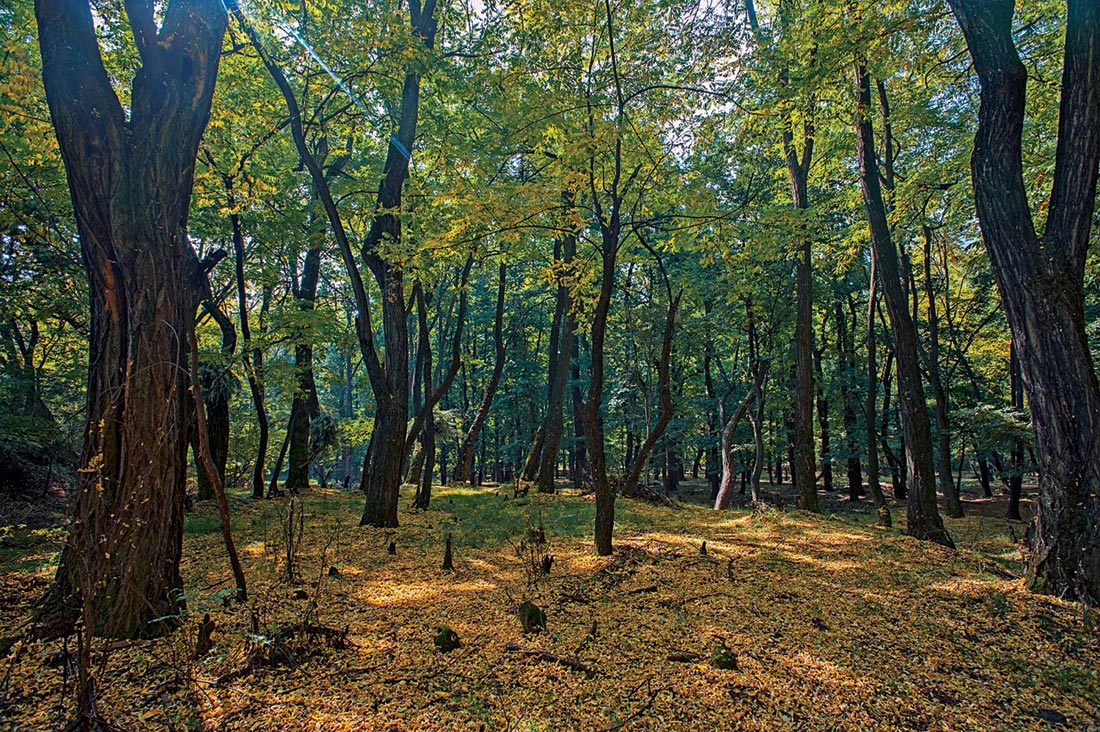 The Dachigam National Park, located close to Jammu and Kashmir’s capital city of Srinagar, is an all-year-round birding destination. However, if you time it right, visiting during winter gives you a chance to also see this park’s iconic animal, the endemic hangul. Photo: Dhritiman Mukherjee.

Among resident species, the Little Bittern, common in Europe, Africa and Central Asia, but a rarity in India, is prized by birders. Not surprisingly, the Dal Lake and its surrounding waterbodies offer some of the best habitats in India to twitch this species effortlessly even as you enjoy a casual stroll or a boat ride in summer. Another such species is the Tawny Owl that is seen in Kashmir, which is its easternmost distribution. Additionally, the European Bee-eater breeds here in the valley.

In September, the J&K Tourism Department will be hosting a bird festival to celebrate the Union Territory’s rich avian heritage and to create greater awareness about the varied birding opportunities available. Sanctuary readers… take advantage of this opportunity to visit Kashmir and benefit from some of the expertise of some of the world’s best birders, bird guides and photographers!

In Jammu, the Rook, a corvid, claims its southernmost distribution in India and is regularly recorded during winters.

Though the region spoils you with its cornucopia of avians, the bird that should be on every serious birder’s list in Jammu has to be the Rufous-vented Grass Babbler. This species is found in India, Nepal and Pakistan, mainly in the plains of the Indus river, and its tributaries such as the Chenab in Jammu. An ecosystem that is as exquisite as it is fragile, it is sadly in decline at an alarming rate. The area badly needs protection because it is home to several other species that are near-endemics and are red-listed by IUCN. 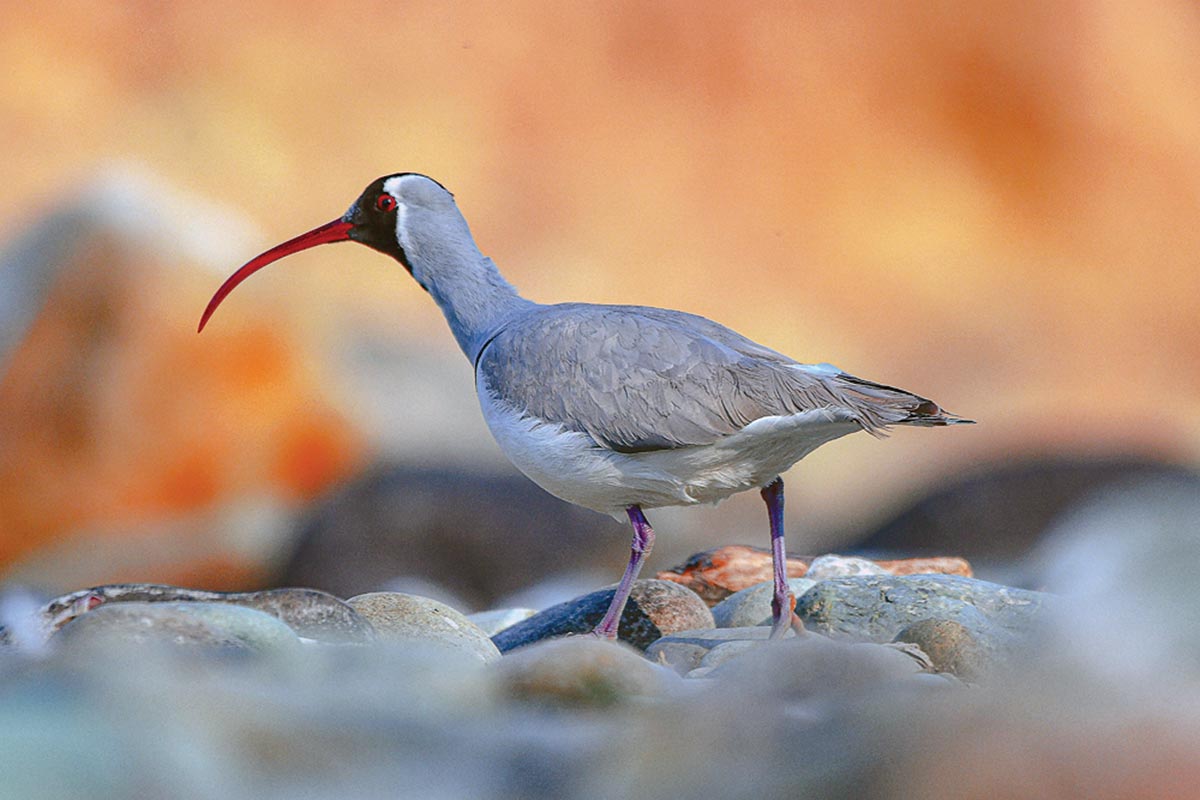 While on a family trip to Kashmir in 2008, the author was astonished to come across the extremely rare Ibisbill while on a riverside stroll in Pahalgam. The only member of the family, Ibidorhynchidae, the species has a unique long crimson beak and is known to frequent high-altitude and not-easily-accessible places along rivers in the Himalaya. It is a large wader and prefers to breed on the sides of rivers with shingle beds and stretches of sand, rocks and pebbles. Photo: Reyan Sofi.

Saurabh Sawant is Consultant, Projects and Natural History at the Sanctuary Nature Foundation. He is a wildlife researcher, naturalist, wildlife photographer and filmmaker and his work has been widely published.