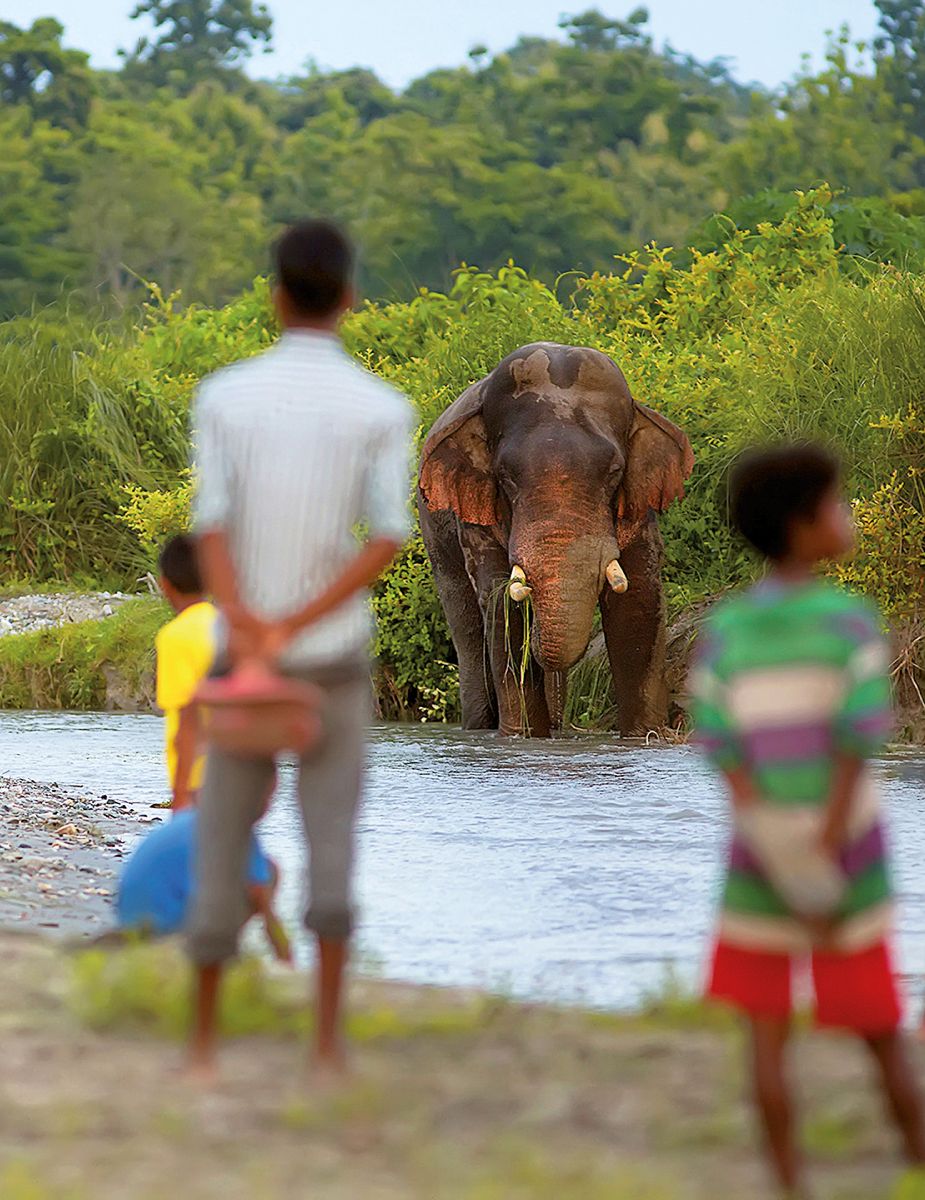 For centuries, humans co-existed with nature. But human greed has thrown this equation off kilter, as seen here in the Buxa Tiger Reserve where adivasi communities and wild species are forced into conflict by rampant mining.
Photo courtesy: Rupak Ghosh Dastadar

Ever since the first World Wilderness Congress (WILD1, South Africa, 1977) was convened, it has been a tradition of these congresses to sow deep seeds of change. The 9th World Wilderness Congress (WILD9, Mexico, 2009) gave voice to two big ideas that are now front and center on global agendas. There we launched public calls to reunite actions under the UN Climate Convention with the Convention on Biological Diversity. We also launched the movement to protect at least half the world. Now these ideas, known respectively as Nature-based Solutions and Nature Needs Half (sometimes Half Earth), are widely discussed and have been reaffirmed scientifically over and over again.

The Birth of the Nature Needs Half Movement

We knew we had to launch these big ideas even if we did not know exactly how they would work. Now, eleven years later, we know how and where to begin this great journey of transformation. By protecting at least half the world in an interconnected way, linking climate action with nature conservation, and reducing our consumption patterns and improving our production practices in nature-friendly ways, we can immediately halt the loss of nature and begin to enable her recovery. 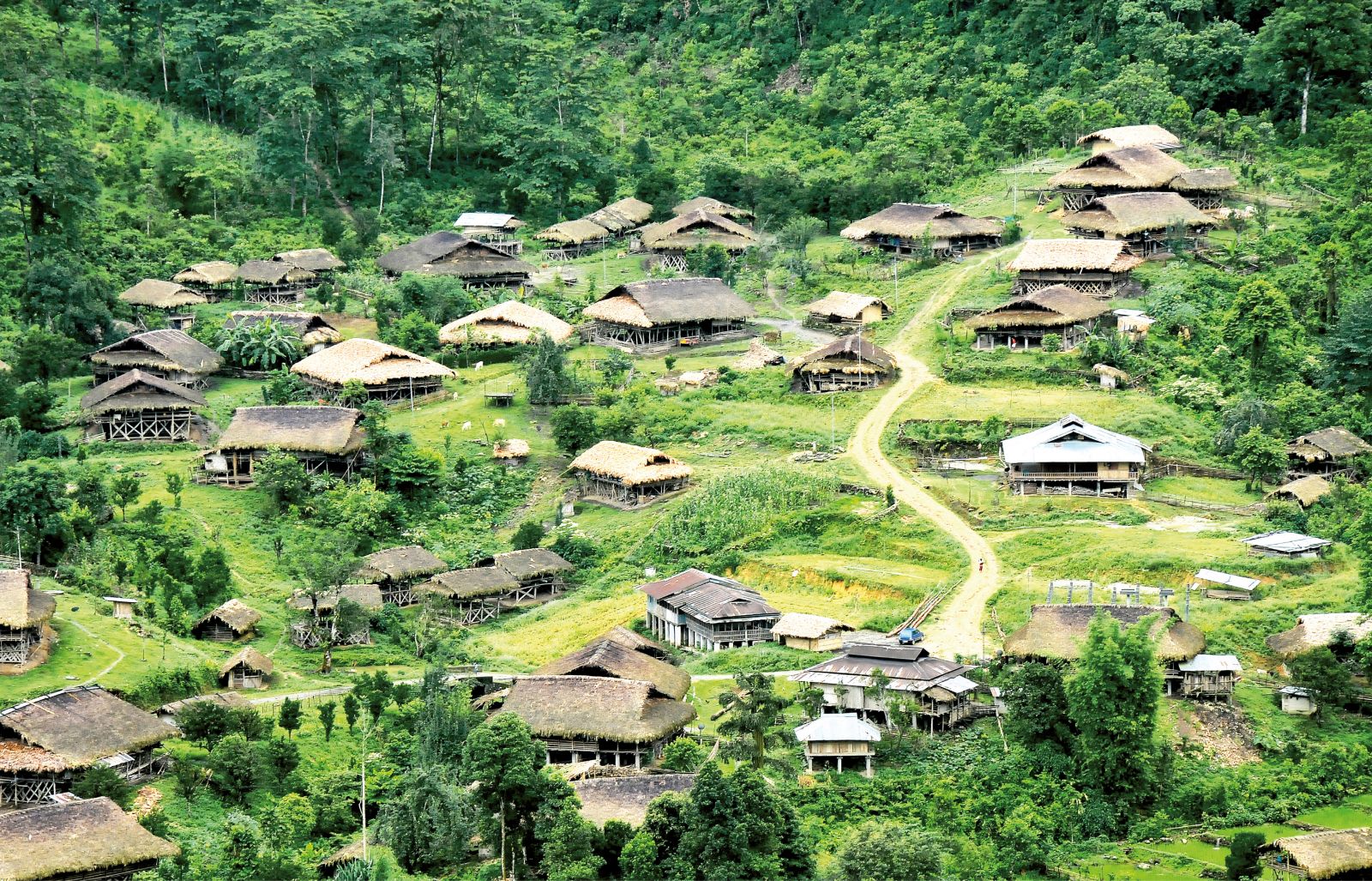 The ‘Nature Needs Half’ objective of restoring at least half the world’s oceans and lands as wildernesses by 2050, is a survival imperative in a world overwhelmed by biodiversity loss and the climate crisis.
Photo courtesy: Samsul Huda Patgiri

The charge my colleagues gave me almost four years ago is to work collaboratively with a wide variety of people from around the world to seek a scientific consensus on how much of the world we ought to protect so that humanity might live in harmony with nature. Then our job is to persuade the over 190 countries that are parties to the Convention in Biological Diversity to implement that scientific consensus when they meet in China later this year to set the next ten-year plan for the world’s biodiversity.

What we have learned is that the science is very clear that we should protect in the range of half the world, land and sea, in an interconnected way. We need to do this if we want to ensure that biodiversity – meaning species, genes and ecosystems and the essential interaction among them with the world’s natural processes – is to survive in a recognisable form. We must also do this if we want to stabilise the climate and adapt to the changes we have already made to it and ensure there is enough water for humans to drink. We should act immediately to ensure we lose no more primary ecosystem elements, whether they be fragments of nature or vast wild areas. We also need to restore nature where it has been harmed. How we do that must also take into account the plain fact that we humans also need to interact with nature to make a living. We always have. 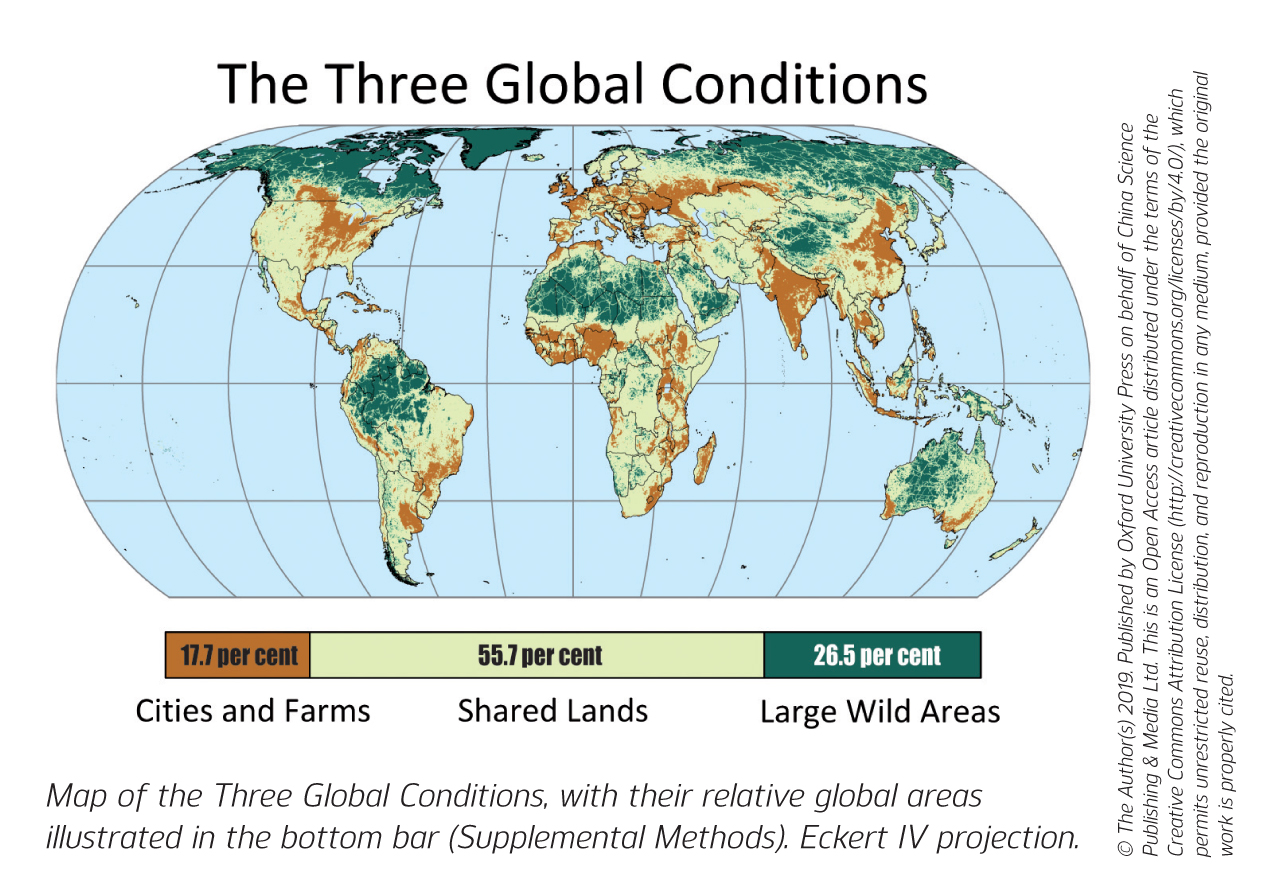 With a few notable exceptions, we were able to interact with nature within the earth’s means until the mid-20th century. Then, our rapidly growing population and greatly increased technological capacities began to outstrip our world’s capacity to absorb our activities and carry on. Our once resilient world has become fragile. The complex tapestry of the natural world is now rapidly unravelling. How we reconcile nature’s needs for greater protection from our needs and desires to live healthy and meaningful lives in the widely varied conditions of the world is the central question of our time.

To get at this, we assessed what remains of nature in a broadly natural condition and meshed it with how humans have been using the world. We sought to establish a baseline of things as they are now in 2020 so that we might take positive steps to secure the areas that are still doing relatively well and make things better in the future. We found that the world has basically three conditions for taking action on nature conservation and sustainable human use. About 17 per cent of the world is heavily transformed by cities and farms, where over three quarters of us live. It is this area and the adjoining ocean areas that produce most of the world’s food. And it is here that most endangered species are found, most pollution is generated, and the vital natural service of crop pollination is at risk. We need to keep our cities compact to preserve our best farms and give people access to nature; reduce the amount of chemicals that get into our freshwater; and secure all remaining fragments and determinedly restore nature while reducing the amount of carbon dioxide and methane that we generate from farming.

A little over half the world is in what we call shared lands, meaning less that half of the land has been transformed and significant areas of wild nature remain. Rural people dependent on less intense farming live here, as do many large mammals such as elephants and tigers. We also extract minerals and wood from here and have built hydro and irrigation dams. We should secure the remaining areas that have ecological integrity in interconnected systems of Protected Areas that cover 25 to 75 per cent of the landscape, restore missing species and hydrological processes and integrate food production and resource extraction practices in compatible ways. In the ocean, we need to leave at least 30 per cent of such areas unfished (with the exception of traditional communities’ sustainable use). In these areas we can learn from and support traditional indigenous ways of making a living sustainably. 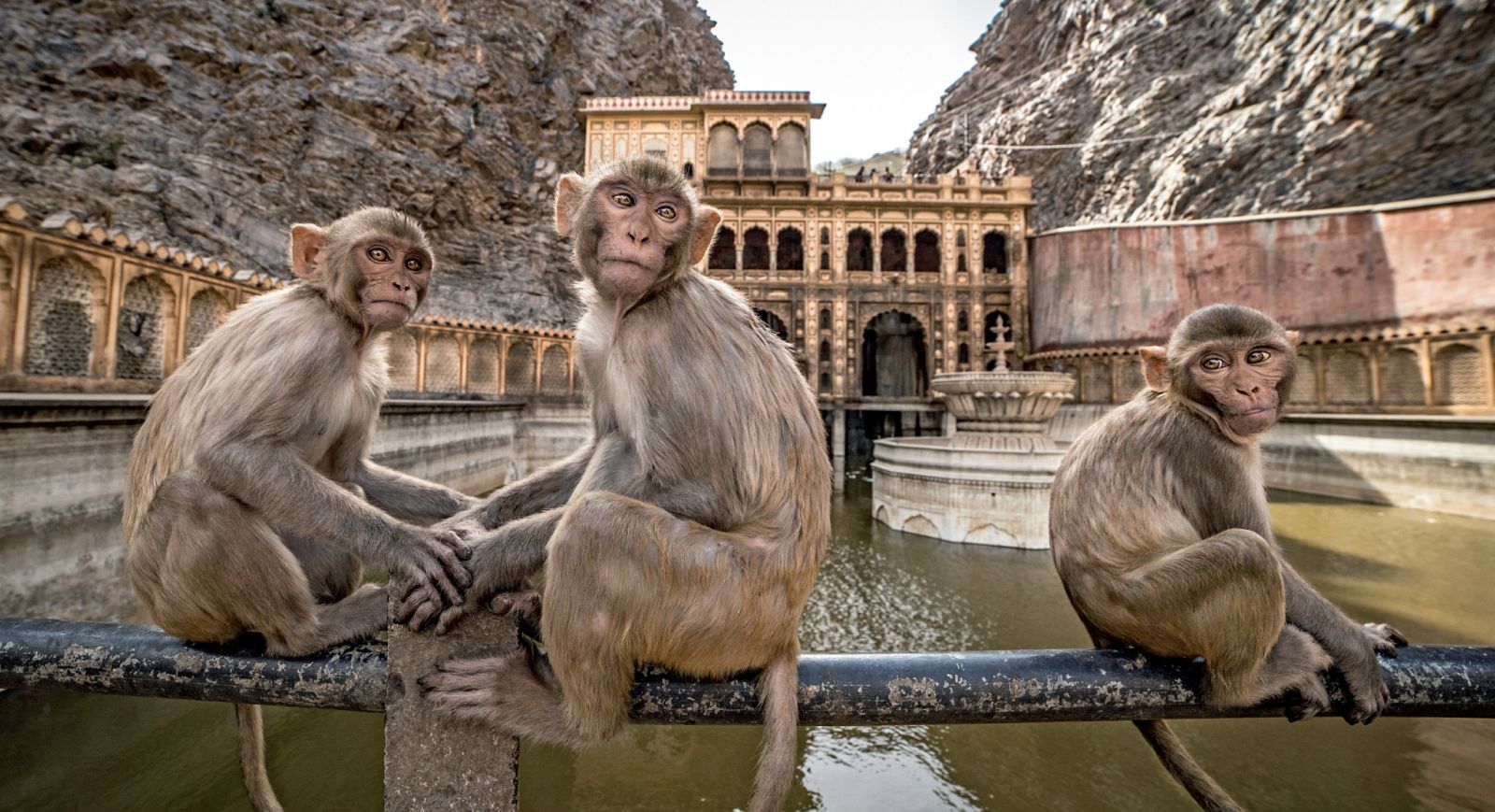 The author urges that we act immediately to protect primary ecosystem elements such as Jaipur’s urban pockets of nature that serve as a refuge for these macaques, and work to restore nature where it has been harmed. We are as dependent on functional ecosystems as the wild species we wish to save.
Photo courtesy: Connie Allen

About one quarter of the world is still very wild. These areas include the vast boreal forests of Canada and Russia and tropical rainforests in the Amazon, Congo Basin and parts of Southeast Asia, the Australian outback and the Tibetan-Qinghai Plateau. They have vast storehouses of carbon, large mammal migrations, wild rivers and indigenous people living close to the land. They are essential to the functioning of the world and affect global rainfall patterns. It is essential that we keep them intact with resource exploitation as a rare exception. And we need to accommodate the movement of species across all three conditions. To see more, visit www.naturebeyond2020.com.

All this and other studies have led IUCN and many others to call for the protection of at least 30 per cent of the world by 2030. Many countries are supporting that vision too. It is ambitious as it would involve almost doubling the amount of nature protected in the world. Increasingly, it is expressed as a stepping stone towards half by 2050.

Act Before it's too Late

Personally, I believe that we should move faster to protect at least half the world in an interconnected way. Thirty per cent by 2030 is the low end of what is required. I believe that every other life form has the right to live and that I have a duty to ensure that all species be free to meet their evolutionary potential. To do this we must protect habitat and maintain intact the natural processes that run the world. All aspects of nature, including rivers and oceans that are considered by some to be inanimate, vibrate with energy. Rivers that run free nourish their floodplains and support life across the landscape. The ocean absorbs carbon dioxide and provides oxygen. Whole forests like the Amazon rainforest are not only living systems; they also generate rain. These natural processes that are essential to life on earth and to the functioning of the planet’s life support systems require large-scale conservation.