Text and Photographs By Soham Kacker

In September 2021, something incredible began in a secluded corner of Lodhi Gardens, in the middle of Delhi. On a morning walk, I looked up from the path to see a star-lit canopy – tens of thousands of star-shaped flower clusters (spikelets, as they are called botanically) on huge, branched inflorescences. The bamboo had flowered. This bloom was part of a world-wide synchronous flowering of the species – Bambusa balcooa – all of which would, like most grasses, die shortly after shedding their seeds. The next time they bloom will be 45 years later, and I will be pushing 65 (should I be that fortunate). Many species of woody bamboos flower synchronously (they are gregarious), and die soon after (they are monocarpic). But why? The answers to these questions are still the subject of robust debate, despite these phenomena being observed by humans for thousands of years. They reveal a gripping evolutionary story. 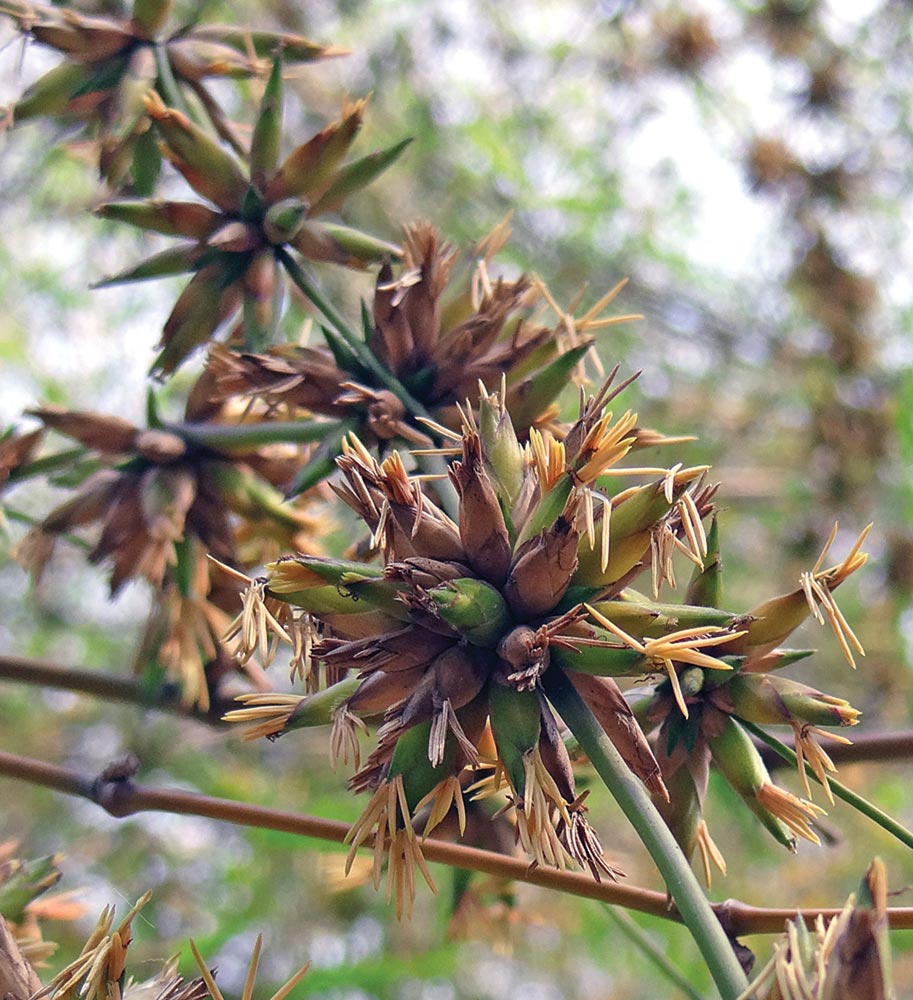 Each star-shaped spikelet of the Bambusa balcooa comprises four to six fertile florets. These spikelets bloom on all members of this species once every 45 years in a global synchronous flowering event.

Monocarpic plants have evolved independently in many plant families. This pattern of flowering confers many benefits, most prominently the allocation of maximal resources to flowering and fruiting, thereby maximising reproductive success. In closed canopy systems (although such examples of monocarpy are rare), the death of the parent also provides a canopy gap – allowing the seedlings ample access to sunlight and nutrients. Synchronised flowering is harder to explain from an evolutionary perspective. Although many theories have been suggested, the mechanism proposed by ecologist par-excellence Dan Janzen in 1976 has gained the widest acceptance. Bamboo seeds are nutritious and abundant, and therefore attract several species, which feed on them with great zeal. So efficient are the bamboo’s predators that should they exceed a certain number, they could completely exterminate a bamboo plant’s crop of seeds dooming its chances at regeneration. Janzen proposed that gradually, over millions of years, bamboo plants fell into patterns of synchronised flowering; this way, of the resulting profusion of seeds, at least a few were bound to survive, no matter how many the predators ate. Any individual, which bloomed out of sync would be eaten to extinction, and its non-conformist genes would not be passed on. Evolutionary biologists studying bamboos suggest that chance mutations in bamboo flowering genes tend towards establishing longer flowering cycles – within the constraints of a plant’s lifespan.

Different bamboo species have evolved different flowering cycles. Some, like the ringal bamboo Drepanostachyum falcatum of the middle-Himalaya flowers on a 25-year cycle, while the Chinese mainland bamboo Phyllostachys bambusoides flowers only every 120 years, meaning that each time they flower there is not a single person alive who has seen them before! This incredible reproductive biology can have unexpected outcomes for the species and communities, which depend on bamboo. In northeastern India, the post-bloom abundance of bamboo seeds (also called bamboo rice) causes a population explosion of rodents, which cause crop damage (even to the point of regional famine) and spread disease. Since bamboo dies after flowering, it deprives many herbivores of a vital food source. In the Waynad Wildlife Sanctuary in Kerala, a recent flowering event caused elephants to migrate out of the park, increasing human-elephant conflict in the surrounding villages. With such a synchronised reproductive window, many species of bamboo are also vulnerable to local and global extinction when they flower – should the seedlings fail to germinate, fall prey to predators, or be disturbed while germinating on account of unpredictable factors. For species such as the ringal, this is a distinct threat since their habitat is becoming exceedingly degraded and fragmented due to human interference. 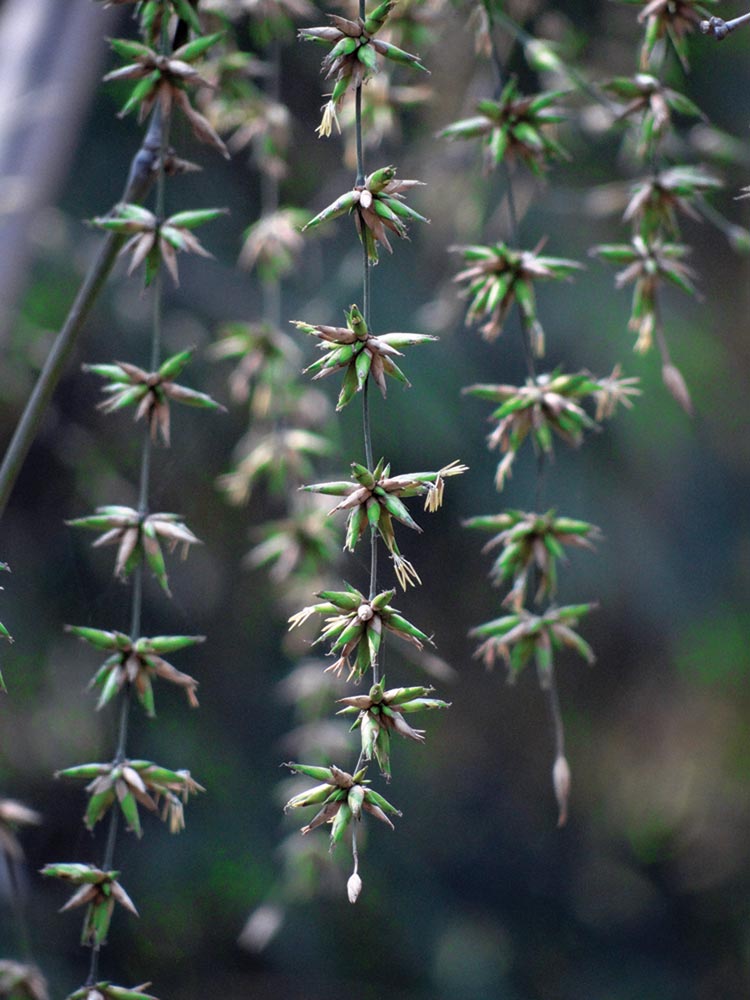 Each star-shaped spikelet of the Bambusa balcooa comprises four to six fertile florets. These spikelets bloom on all members of this species once every 45 years in a global synchronous flowering event.

With the disappearance of bamboo we have much to lose – ecologically, economically and culturally. I hope we make it till the next flowering. See you in 45 years!