An Imagined Man-eater by the Bedthi River

Text and photographs by Seshadri K.S.

A cool breeze made the hot winter afternoon bearable. Deepak and I were hopping from one boulder to another trying not to slip and fall into the Bedthi river. We planned to traverse the river as far as we could, cut across into the forest, and head back to his house by evening. We would stop frequently to look at the iridescent green damselflies or to investigate any sound, which often turned out to be a bamboo tree creaking in the wind. The rocks were smooth, and in several places, the river had carved out shallow pools where pond skaters were afloat, elegantly dancing on water. Our hike continued up to a point where we suddenly saw a flock of Pond Herons take flight and go past us. Having read too many man-eating tiger and leopard stories by Kenneth Anderson, we were spooked and concluded that there was a man-eater up ahead. We decided to wade in the water, under the illusion that we would be safe if the marauding creature did show up. 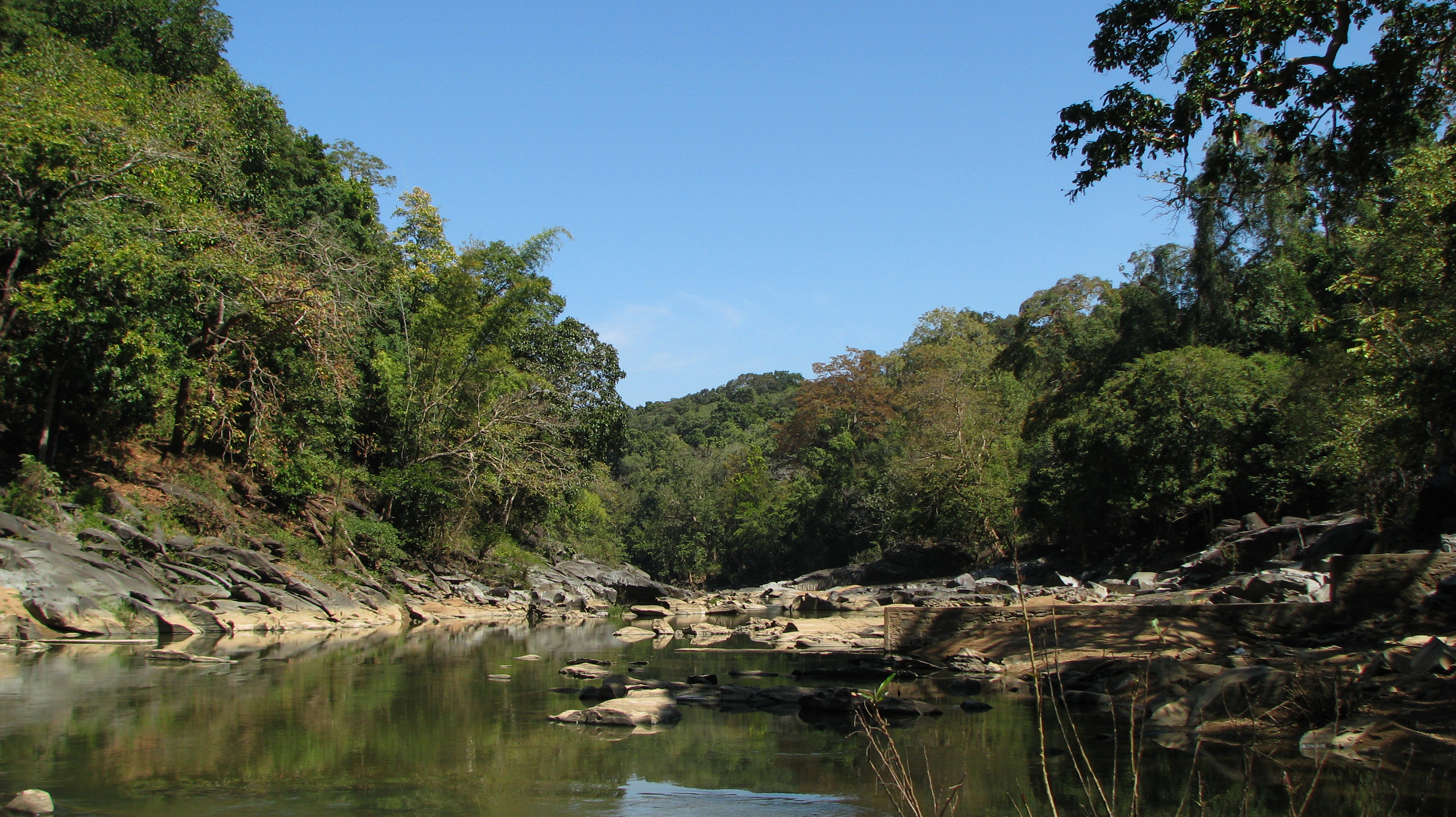 The Bedthi river flowing quietly through some of the last remaining undisturbed semi-evergreen forests of the Western Ghats.

We later realized no man-eaters were waiting for us. It was a figment of our vivid imagination. We continued up to a point where a small waterfall prevented us from going any further. We quickly devoured the lunch we had packed with us and waded back up the river to reach the main road from where we walked back to his house, about 20 km. away. The walk back home was rather relaxed and was slowed down by frequent encounters with birds. It was the first time I was in the forests of Sirsi in Uttara Kannada and I vividly recount seeing many lifers, such as the Ruby-throated Bulbul or the Great Hornbill, which flew overhead, making whooshing sounds. 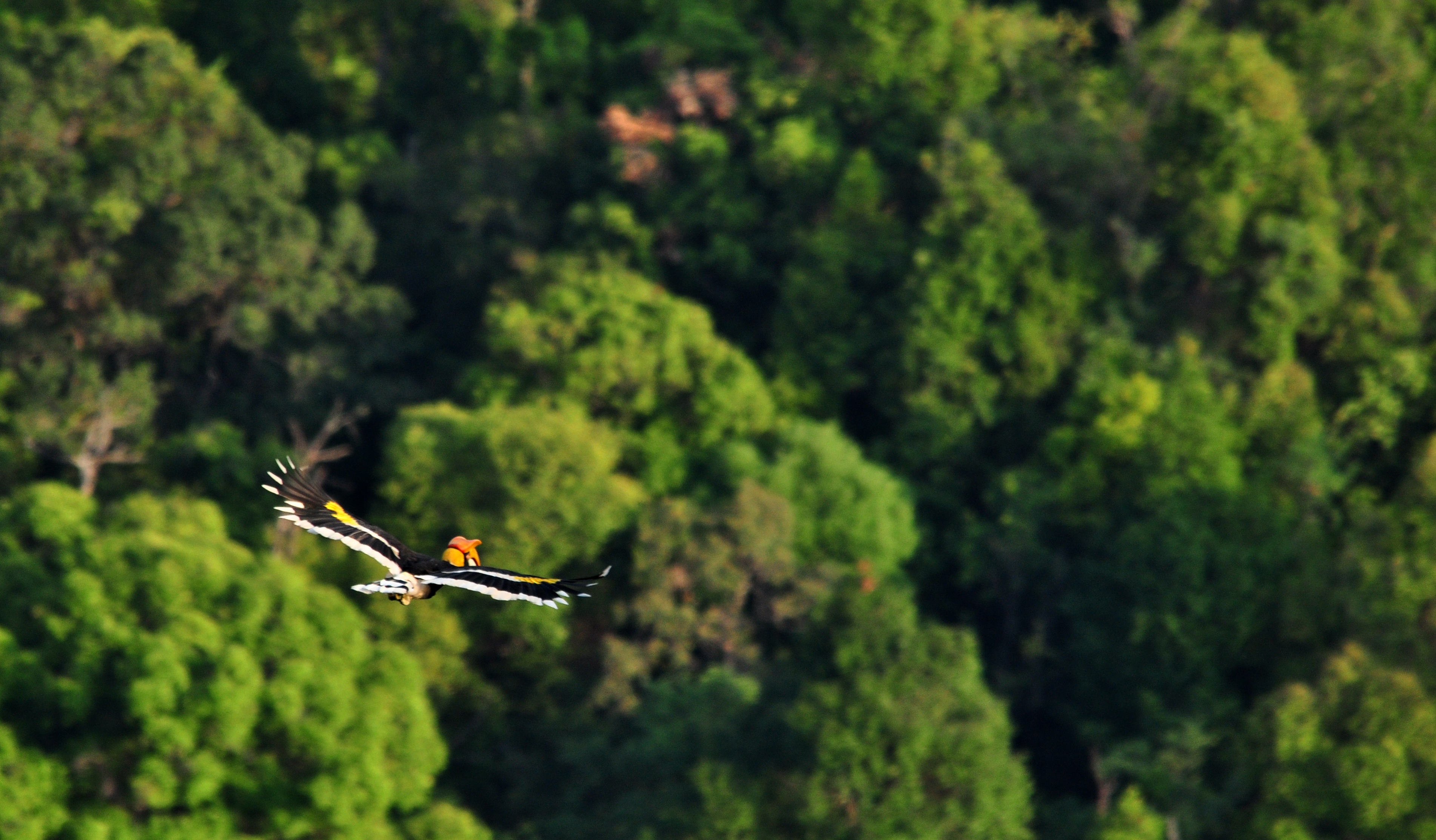 Birds such as the Great Hornbill disperse seeds to great distances and help in maintaining an ecologically intact forest.

This was in the year 2005 when Deepak Bhat and I were undergrad students studying environmental science in Bangalore. He had grown up in a remote village near Ummachgi in Sirsi and I had grown up in the burgeoning city of Bangalore. Incidentally, we were both inspired to watch birds after reading the works of Poornachandra Tejaswi, a renowned author who wrote extensively about nature in Kannada. The first vacation we got from college, I headed off with Deepak to visit his village and look for the flying lizard which we had both read in Tejaswi’s Karvalo and the Malabar Trogon, about which Tejaswi had written in another book. 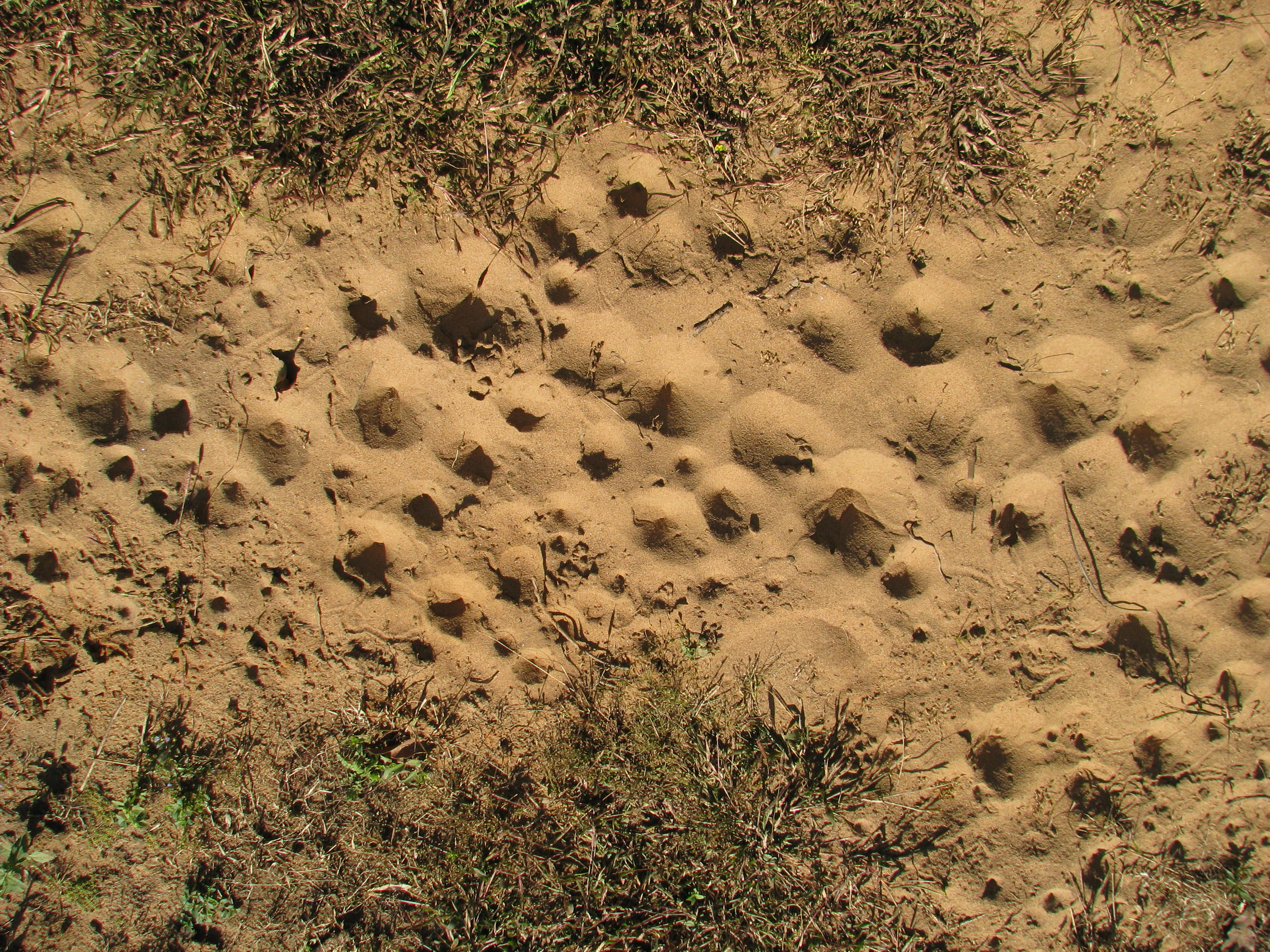 Walking along the river, we saw several of these pitted patterns in the sand. These are the larvae of ant lions that lay silently at the bottom of the conical pits. When an unsuspecting insect walks in, they shoot sand and make a meal of the insect.

We did not have to go far in search of birds. His house was nestled within the semi-evergreen forests and we encountered over 50 species of birds within their courtyard. Walking around in the Areca nut plantation, we observed a Stork-billed Kingfisher make a meal of a freshwater crab. By noon, when the sprinklers were turned on, a White-rumped Shama decided to put up a show and bathed in the water collected in fallen Areca nut fronds. We spent two full days roaming around, returning home only for the scrumptious meals.  Yet, we did not catch a glimpse of the Malabar Trogon or the flying lizard. 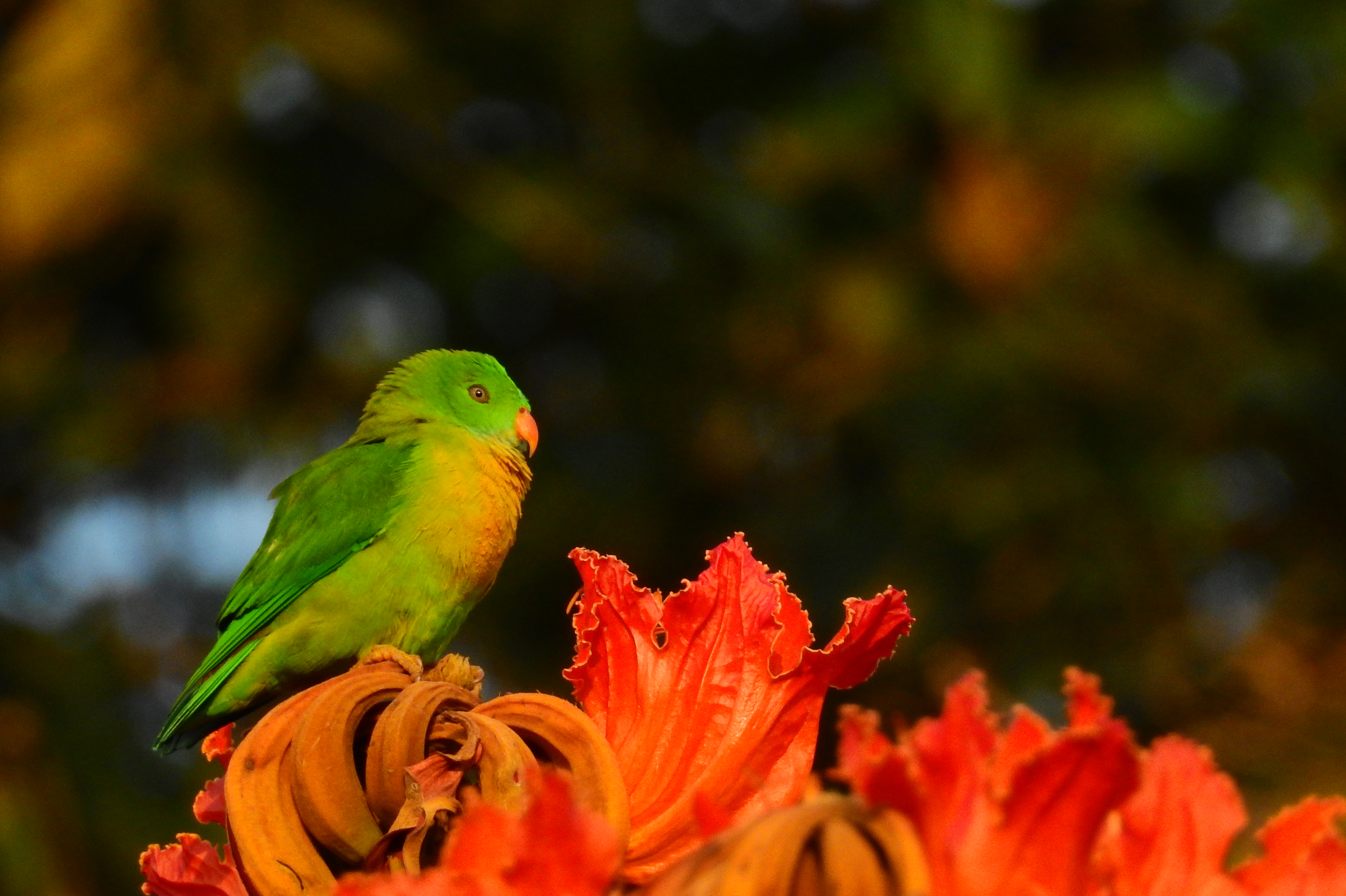 Although we did not find the Malabar Trogon until later, we saw several individuals of the Vernal hanging parrot which came to drink the nectar from an African Tulip Tree planted by the road.

We decided to go out a little further into the dense forests and headed towards the Bedthi river. This river originates in the Dharwad district where it is called Shalmala. When it passes through Uttara Kannada, it gets the name Bedthi and as it grows in size further down, it goes by the name Gangavalli, before emptying into the Arabian sea near Ankola.  In the late 1970s, there was a plan to build two dams across this river to harness electricity but the plans were shelved because of widespread and sustained local movements against the destruction of these pristine habitats. The movement saw the amalgamation of local farmers, religious heads, writers, and, scientists who argued against the destruction of forest land. 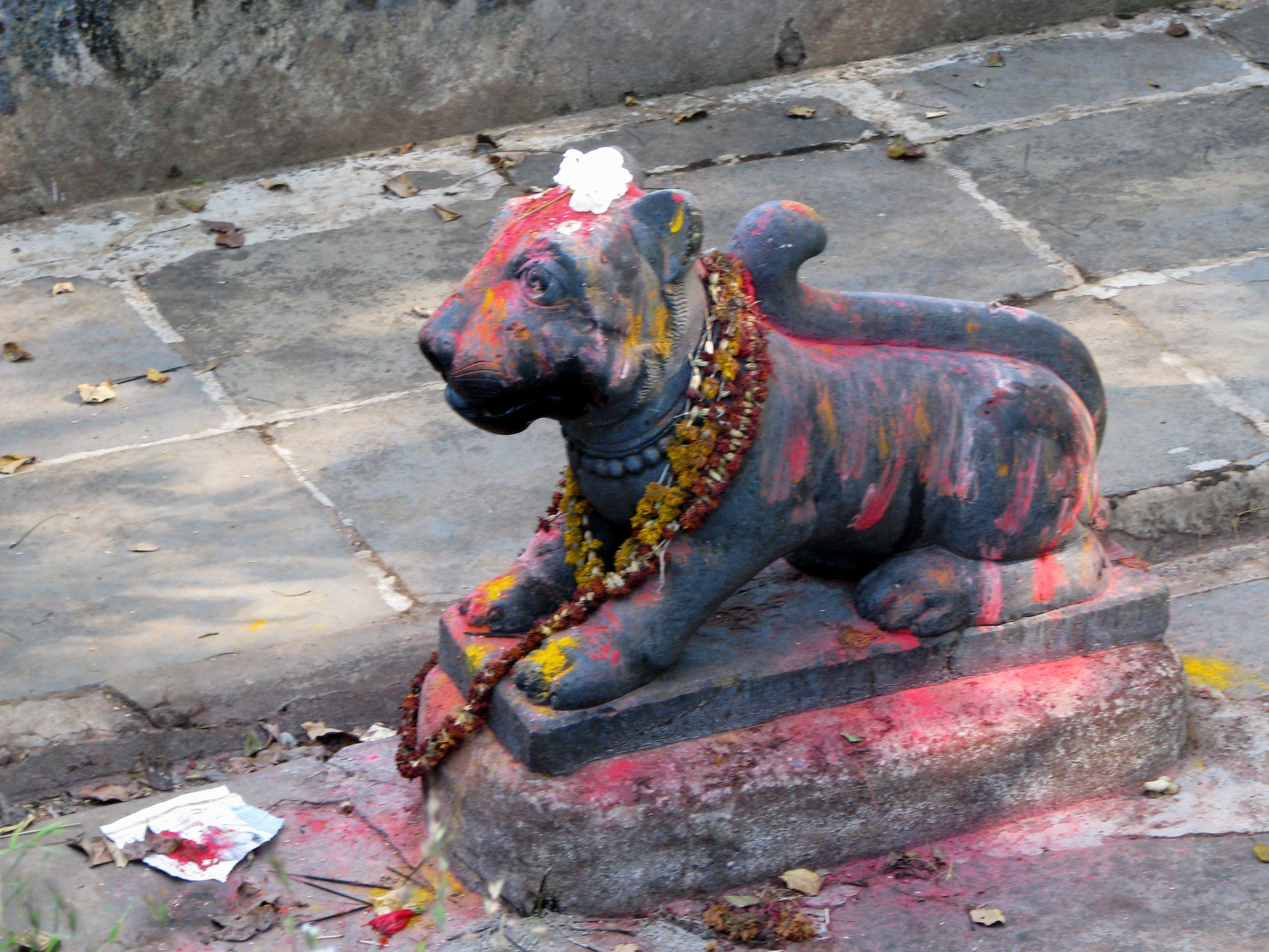 People of the Uttara Kannada district are known for their respect for nature. Idols such as this Tiger, are worshipped across several places.

Walking along the banks of the river, we encountered the endemic flying lizard. Technically though, the lizard (Draco dussumieri) only glides from trees. I remember watching the Draco glide from one tree and climb up on to another. It even stopped for a while and picked off insects crawling on the trunk while it occasionally flicked its bright yellow dewlap. We continued to spend the entire day out in the forest but there was no sign of the Trogon. 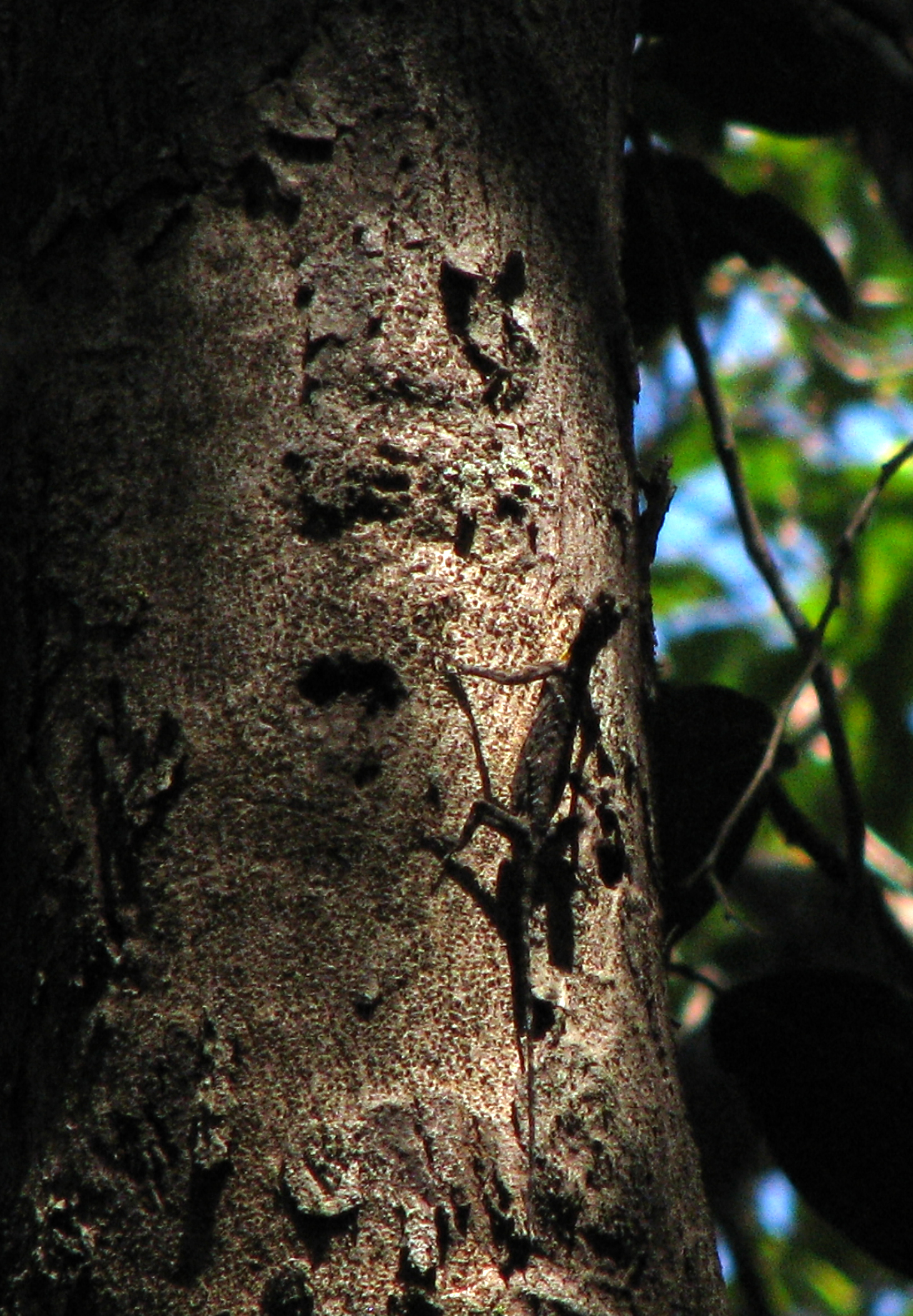 The Draco is a lizard capable of gliding by flattening out its ribs. There is one species found in the Western Ghats and a quest for this lizard was the theme of Tejaswi’s novel Karvalo.

On the last day of my stay, we decided to try our luck by the well in the far corner of their farm. The place was quiet and shaded by mango trees. Here, we spotted a snake in the well and as we tried to catch it, I heard something fly overhead and perch on the mango tree. Looking up, we both froze at the sight of the brightly colored Malabar Trogon, sitting quite literally at arm’s reach! I did not have a camera handy but content with our adventure, I headed back to the city.

Over the subsequent years, Deepak and I continued to go out bird-watching and we volunteered with the Centre for Wildlife Studies for wildlife surveys. This got us a chance to traverse the forests across the Uttara Kannada district. It was during these surveys that I realized how aware the locals were. Seeing us, they would ask whose house we were visiting. The next question was if we were from any government agency undertaking surveys to destroy forests. They would quickly put on their friendly faces once we told them that we were students documenting wildlife. They would drag us home and feed us if it was lunchtime, or offer us a warm milk concoction loaded with spices if it was any other time of the day.

On Toads and Trains

Recently, I spent a few days surveying amphibians in the Castle Rock area in Uttara Kannada district where a railway line from Hubli passes into Goa cutting across the magnificent Dudhsagar Falls. 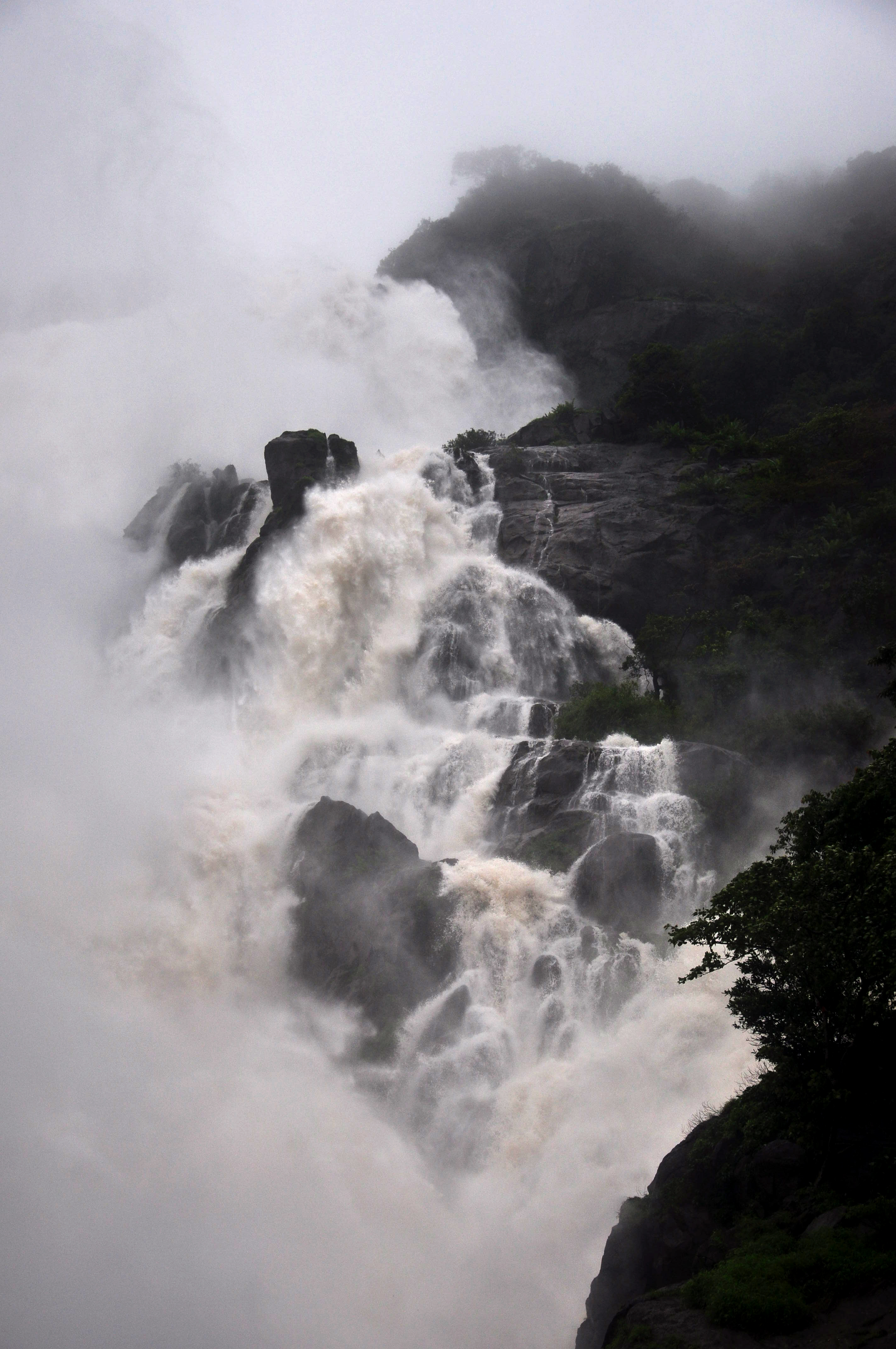 The magnificent Dudhsagar falls is a tributary to Mahdayi river and the Castle Rock-Madgaon railway track goes past this waterfall and is a large tourist attraction.

Here, I encountered several unique amphibians such as the enigmatic Malabar tree toad. This toad, unlike others, lives on tree-tops and descends only to breed in shallow pools of water in tree trunks. There were several other amphibians I found here, including Caecilians. These legless amphibians live underground and very little is known about them. 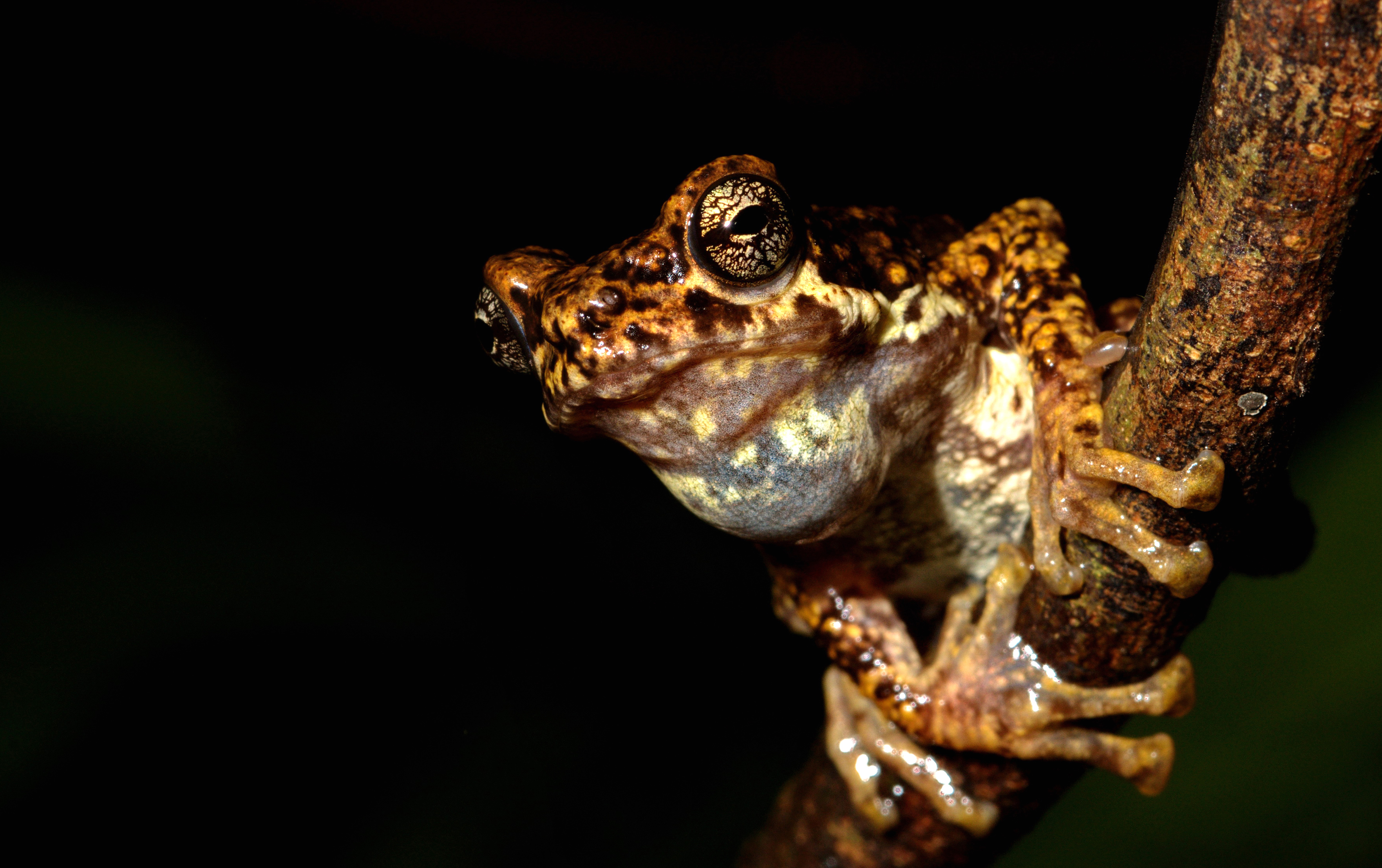 The Malabar tree toad Pedostibes tuberculosus is one of its kind toad and was rarely sighted until recently. Over the last couple of years, more information about this species is trickling in.

Down the Ghats, in Kumta along the west coast, a long time friend and colleague, C. R. Naik, stumbled upon a hitherto undescribed frog in his backyard. Naik, a deputy range forest officer, used to work in the Dandeli National Park and had a keen eye for frogs and reptiles. In 2016, we described the frog as Euphlyctis karaavali. The west coast is known as Karaavali in Kannada and we thought it was apt to name the frog after the region. It was a proud moment for Naik as it was the first scientific paper he had written.  It also goes to show how little we know of the biodiversity in the region. 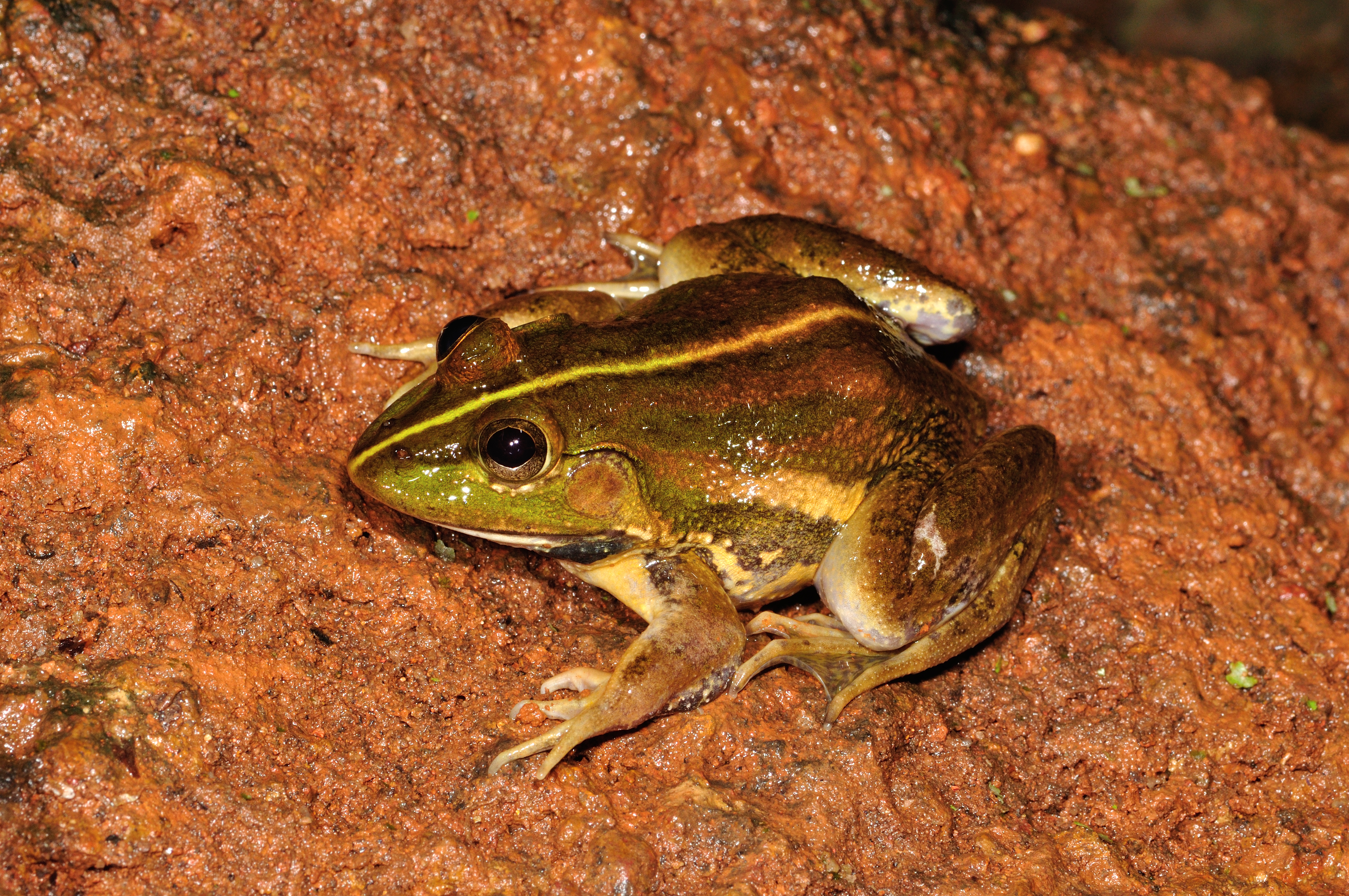 The karaavali skittering frog Euphlyctis karaavali was discovered in 2016 from fallow agriculture fields near Kumta. It is an indication of how little we know about frogs from the region.

Despite the incredible biodiversity and ecologically aware citizenry in the district, the forests are facing yet another onslaught in the form of a railway line that is poised to destroy the fragile ecosystem of the region. Ironically, this project was cleared in March this year when the country was in lockdown because of the COVID-19 pandemic. The pandemic, caused by the novel coronavirus, is an emerging infectious disease that likely jumped over to humans from some other host. There is increasing evidence that such spillovers occur because of habitat destruction and the weakening of ecological integrity.

Recently, I caught up with Deepak, who is busy wrapping up his doctoral thesis on socio-economic aspects of conservation. We made plans to revisit some of the areas that we had traversed, about a decade ago. The river continues to flow without a dam. The only other river in the district to flow unobstructed is the Aghanashini. We remembered the walk along the Bedthi river and we laughed at how we got spooked because we’d read too much fiction. The man-eater part however might be true in a different sense. We humans have been eating away at the forests. When the pandemic threat subsides, we will re-visit these forests; unless, of course, some myopic development project beats us to the race and destroys the sanctity of this biodiverse landscape. 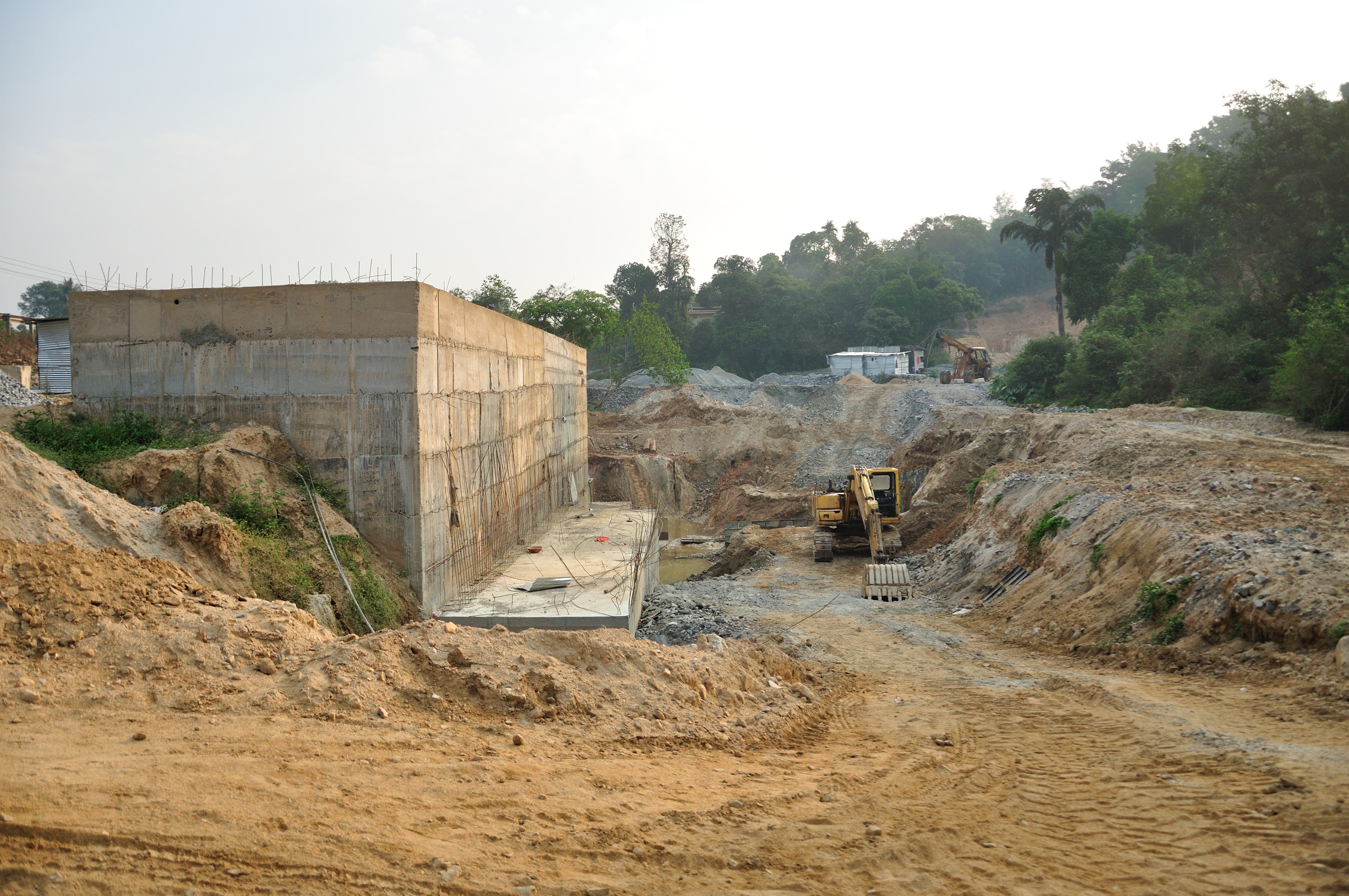 Any developmental activity in the forested landscape requires forests around to be cleared to enable movement of machinery and blasting works. This will cause irreparable damage to the habitat and increase the forest to edge ratio. This is an example of a dam being built across the Yettinahole river.

The proposed railway line will be laid by cutting down nearly two lakh trees and destroying an area of 595.6 ha (~97 cricket fields). The project will involve laying new roads for construction; temporary human settlements within forests; increased risks of mud-slides and surface runoffs and, increased risk of zoonotic diseases moving to humans as vice versa. The track would also cut close to the Bedthi Conservation Reserve and the Dandeli Hornbill Conservation Reserve, established in 2011. The new roads and railway line will create a barrier for animals, ranging from amphibians to elephants, and will result in road-mortalities of slow-moving animals like amphibians and snakes. 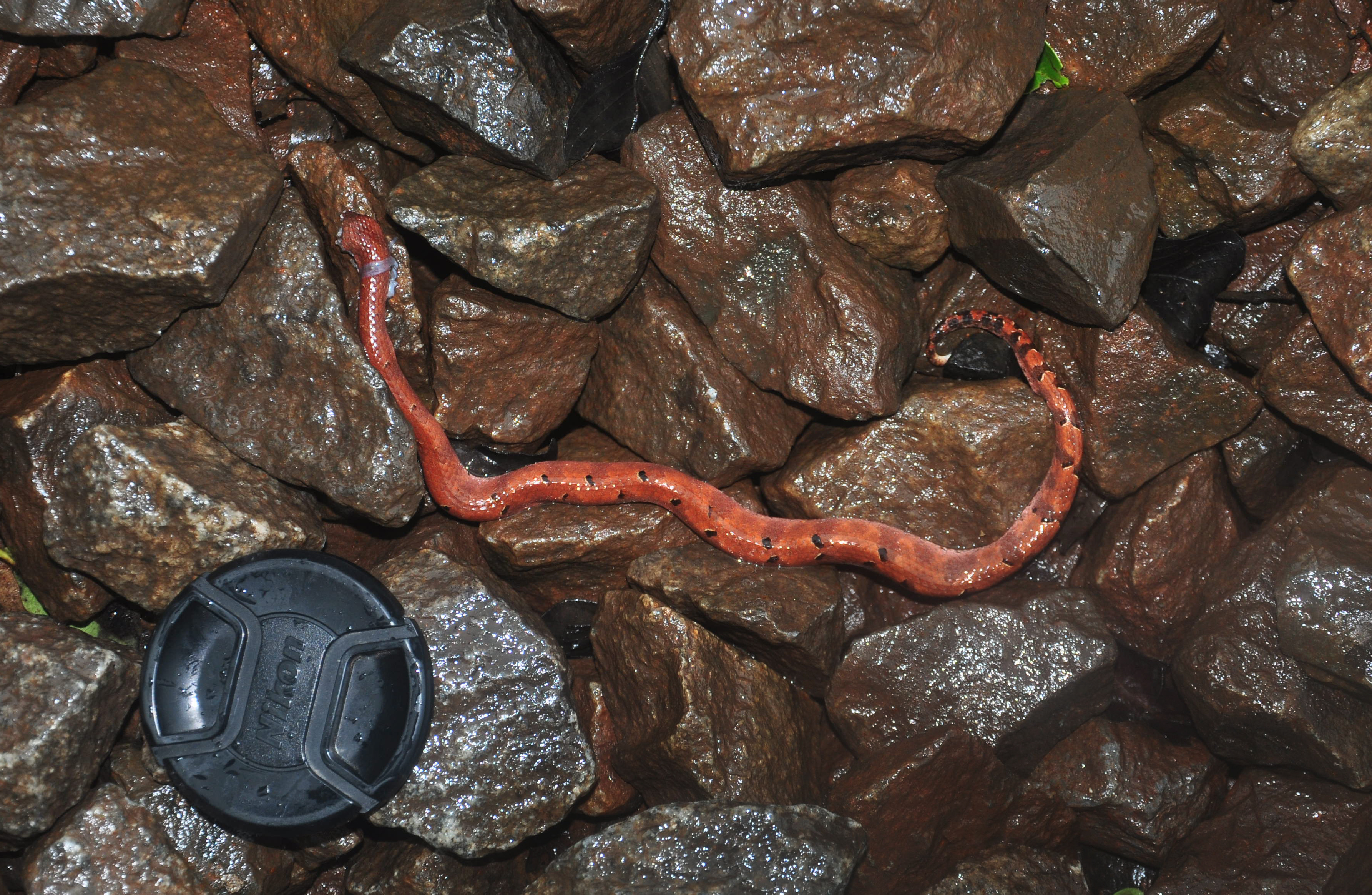 Railway lines are linear intrusions and barriers for movement of animals. Several animals such as this Hump-nosed pit viper get crushed by speeding trains.

The project will further fragment the landscape in the Uttara Kannada district, and is not going to add any benefits in terms of transportation. The proposed line will only be used to carry freight.

In the wake of widespread criticism, the Karnataka High Court recently extended a stay order on this project. A group of concerned scientists have written a document that highlights the problems with the proposed project. It can be found here. Readers are urged to write to the National Board for Wildlife and the Ministry of Environment, Forest and Climate Change urging them to withdraw this disastrous project. 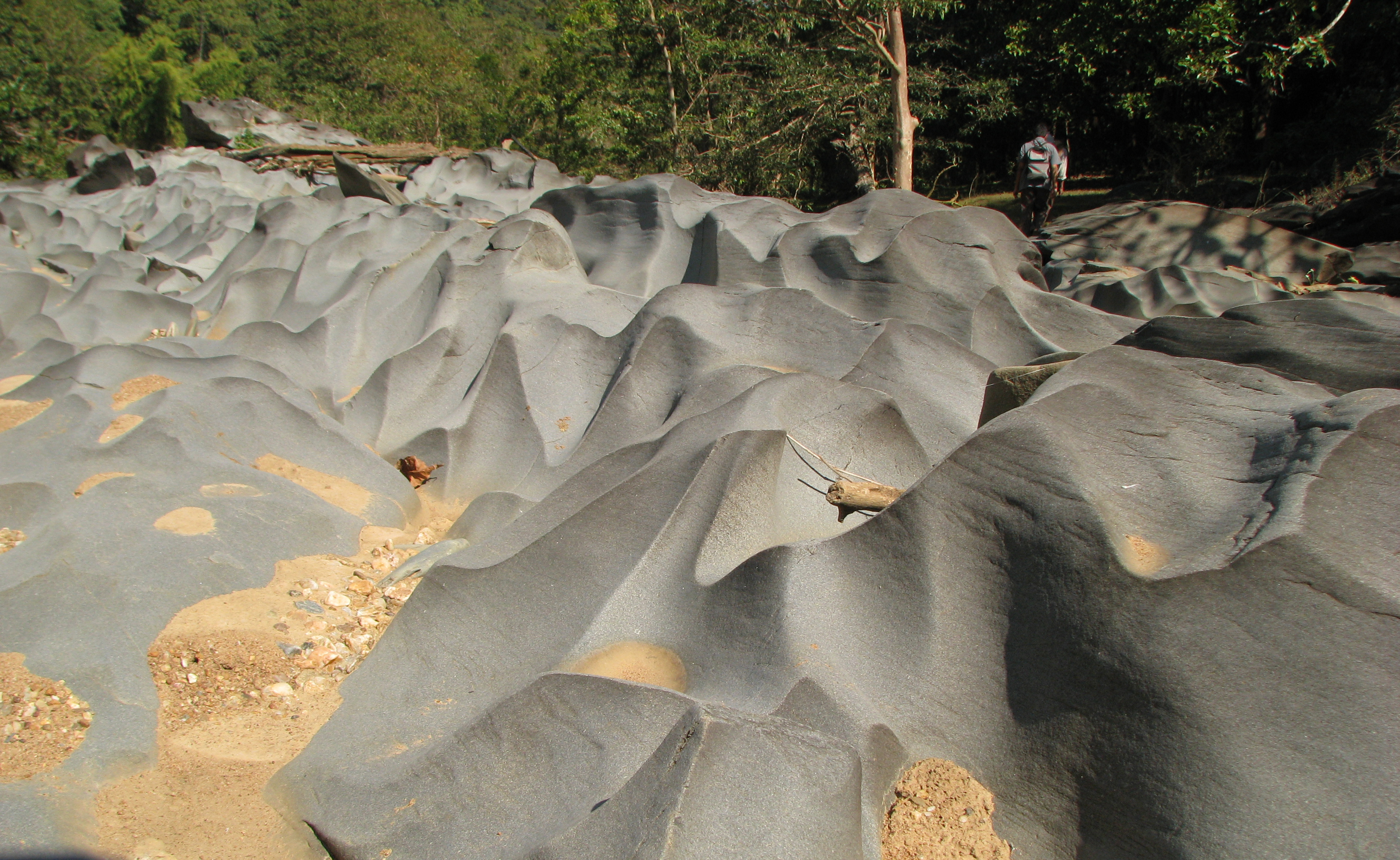 In the monsoon months, the Bedthi river will flow in full strength and over the years, has carved beautiful patterns on these rocks. Such rock formations would be blasted away to make way for the railway line.

Seshadri K.S. is an ecologist with varied interests in the natural world. He is currently a National Post Doctoral Fellow at the Centre for Ecological Sciences, IISc, where he studies parental care behavior in frogs among other things. He posts as @seshadri.ks on Instagram.