I have always marvelled at the diverse flora of Ladakh and its ability to thrive in such harsh conditions. Ladakh is a unique, fragile high-altitude cold desert in the rain shadow region of the Himalaya. Though the landscape may seem barren to the untrained eye, Ladakh’s arid ecology supports a flourishing diversity of flora, fauna and avifauna. For millennia, the region has remained an isolated, self-reliant ecosystem, thriving along with its people, whose traditions, festivals, folklores and unique agro-economy continue to be supported by its glacio-fluvial sediments. Human communities prosper here because of the inter-connectedness between themselves and with their surroundings. Centuries of knowledge, passed down from generation to generation enables them to thrive on high-altitude native edible plants, for food and medicine. Some species of flora, such as several Artemesia sp., are globally recognised for their proven role in traditional medicine. 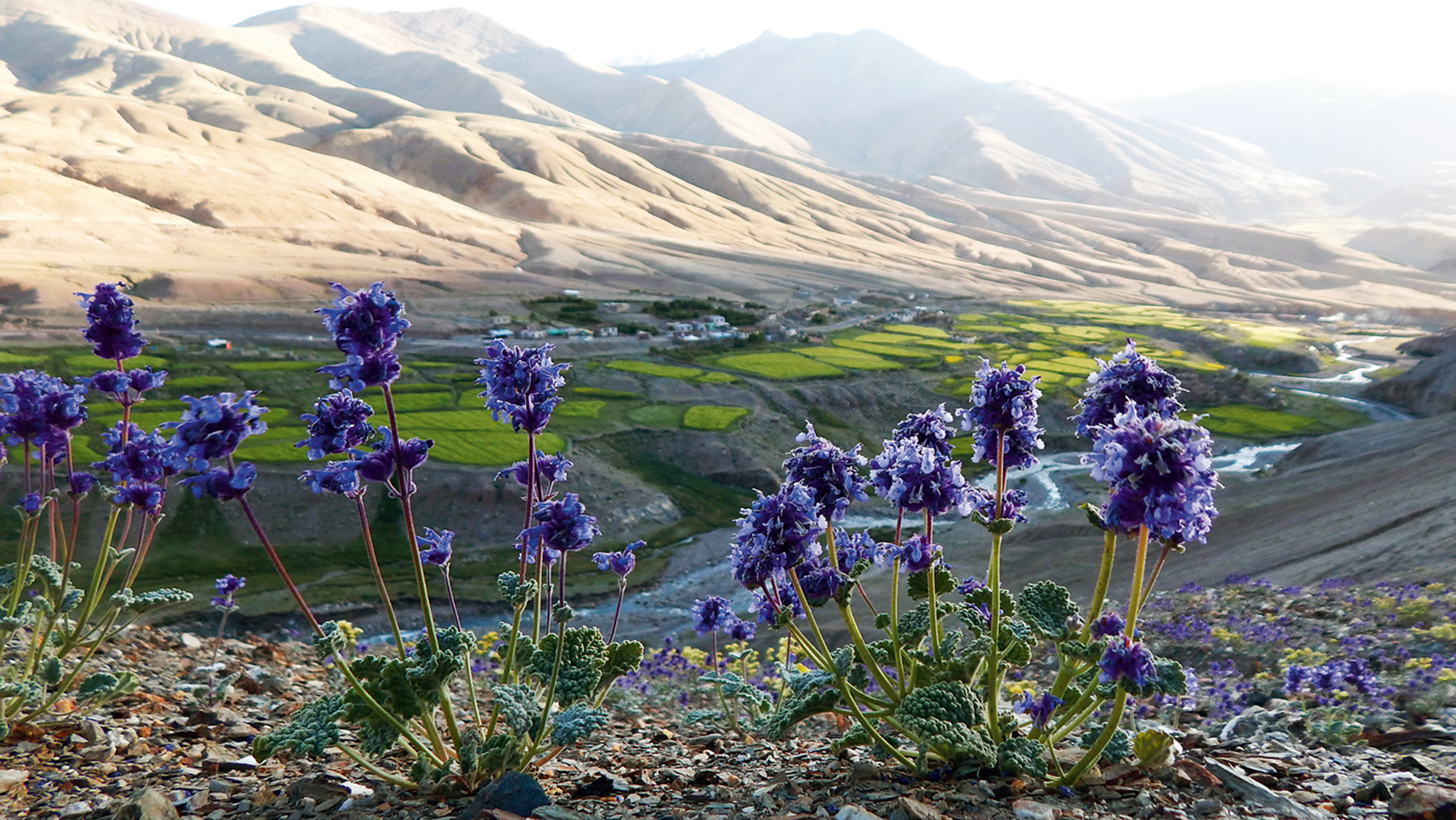 This woolly catmint Nepeta floccosa manages to take sustenance on a rocky slope near a valley in Ladakh. The author recollects collecting wild plants as a child, including this beautiful purple herb, locally known as shalmagok. Photo: Karma Sonam.

But in the past few decades, Ladakhis have had to deal with changes in their environment. Rain is more frequent, as is erosion. The implications of these fluctuations on floral diversity remain understated. As a Ladakhi I feel
a vital need to share the significance of and the vulnerability of our highly under-studied flora.

The Plant Heritage of Ladakh

Though the international conservation community has a vague idea of Ladakh being a rich repository of medicinal flora, its diversity remains untapped. A study published in the Journal of Ethnopharmacology as early as in 2007 noted that no less than 68 species of plants found in the region are used by Amchis (local herbalists) in treatment against kidney and urinary disorders.

A decade-long study published in 2020 listed over 1,085 species of flowering plants. Over a thousand of these are herbs, with the rest constituting trees, shrubs and climbers. I had learned from my grandparents the value of many intriguing plants.

In the past decade, I have witnessed far too many changes that are transforming Ladakh’s ecology and plant diversity. The major threats to vegetation include unrestricted uprooting and overexploitation for food, fuel, fodder and medicine. Herbalists often indulge in the unsystematic collection of medicinal plants and end up uprooting entire plants including Saussurea lappa, Dactylorhiza hatagirea, Aconitum violaceum, A. heterophyllum and Podophyllum hexandrum. 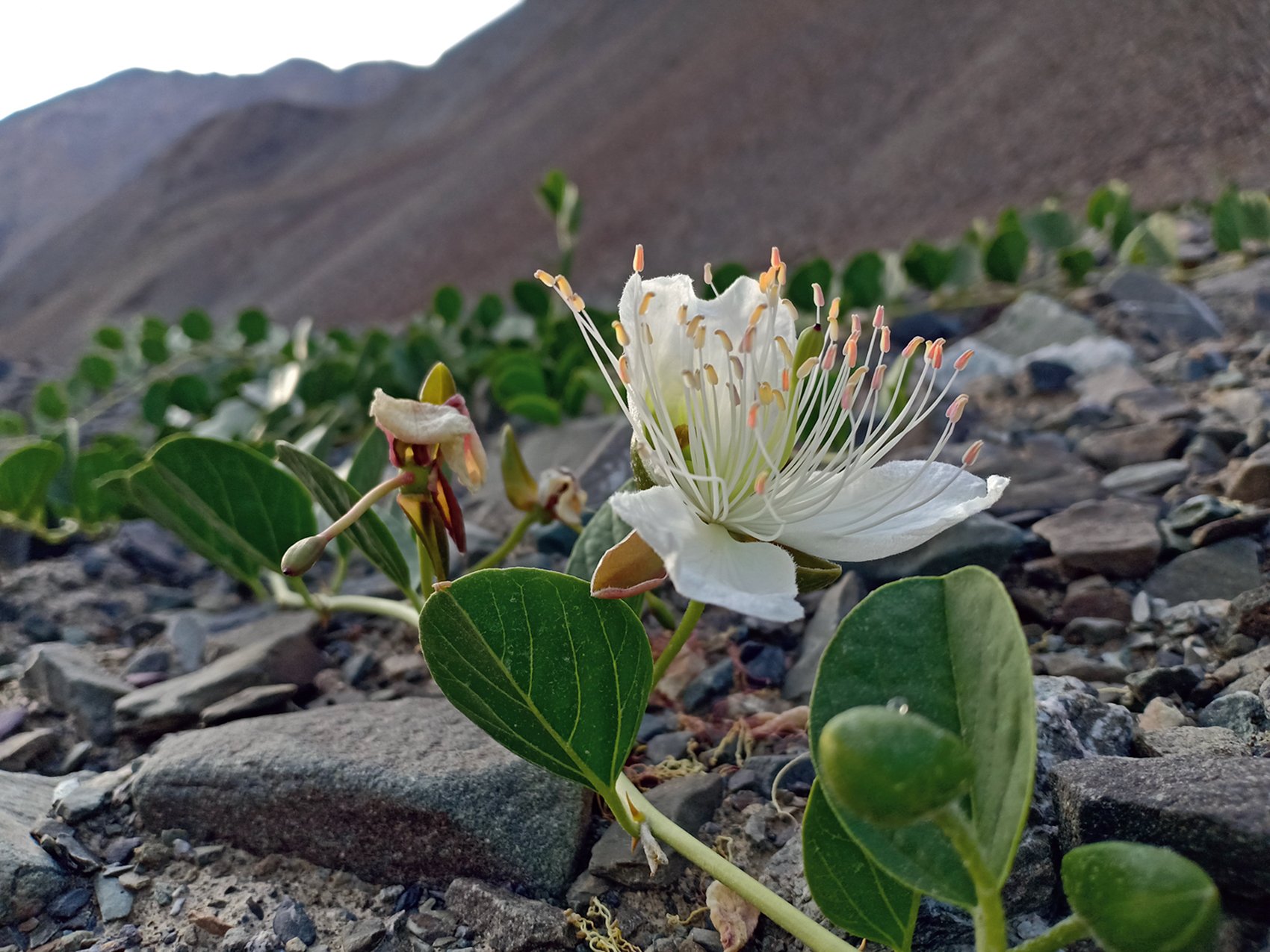 Habitat destruction for the construction of roads, buildings and military settlements compound the over-exploitation of plants in local rituals and customs. And, when combined with the adverse impacts of climate change, virtually all Ladakhi plants are in trouble. During Losar, the local new year, the leaves of the juniper plant are collected in huge quantities to replace old juniper leaves on Lha-thos, a sacred abode of gods and goddesses.

Tourism is the lifeline of many Ladakhi families, but the establishment of tourist camping sites and trek routes have left measurable, adverse impacts on plants. On top of this we have overgrazing of pastures that affects the growth and density of medicinal herbs and species of vegetation, vital to pasturelands upon which humans and their livestock depend.

Influenced by severe climatic conditions, high-altitude plants in Ladakh have evolved a cycle, which encourages flowering, fruiting and seed-dispersal in a short span, before the short and favourable ‘growing’ season is over. Although seed production is a regular business, the most dominating plant species (Saxifraga, Gentiana, Crassula and Sedum) exhibit vegetative propagation, or what is called asexual reproduction. Here flowers or seeds are not involved in the multiplication process. Rather, it takes place through the formation of bulbils, bulbs, corms, tubers or stolons. However, through vegetative process, the dominance of any species is usually localised. This is because vegetatively propagated species have limited modes of effective dispersal. The plants, which reproduce sexually, or through seeds, on the other hand, have much wider ranges and are usually scattered over great areas. This happens because seeds can travel to far flung areas, carried by the air and water or those ancient partners, insects and birds.

Colour too is of utmost importance as bright hues attract insects, bees and birds. Flamboyant red, yellow, blue and violet flowers are thus common at higher altitudes. Irrespective of their size, many plants of the cold desert put considerable energy into the production of the largest possible flowers. Species such as Gentiana, Saxifraga, Companula and Anemone, for instance, bear flowers which are often larger than the plants themselves! Timing is also of the essence. Crocus, Soldanella, Gentiana and Primula are ready to flower even before the snow has completely melted, long before the leaves appear.

Equally interesting is the role of solar energy in the development and formation of ovules and pollen grains. Helioptric (sun-seeking) flowers (Anemone, Ranunculus, Saxifraga), for instance, are shaped like bowls or saucers, which have highly reflective inner surfaces on their petals, with carpels and many fuzzy stamens in the central region. Like small dish antennae these focus reflected light and heat inward. Here the stamens and carpels soak up the heat, which stimulates the quick development of pollen and seeds. Even more fascinating, the mini-hot house within the blooms actually aids in pollination! If you remember just how cold it is in Ladakh, it will be easy to understand why insects are motivated to visit such flowers. Not only are they able to feed on nectar, but they also take the opportunity to absorb heat from the greenhouse-like conditions within the flower. In this manner the pollinators can increase their body temperature, sometimes by as much as 300C higher than the surrounds! The acquired heat obviously enhances their metabolic activity, including reproduction. Thus, through heat donation, the plants need put out comparatively less nectar to lure pollinators. They are thus able to conserve energy even as their symbolic relationship with pollinators is strengthened. Additionally, such flowers actually help the survival and reproduction process of the visiting creatures as well. 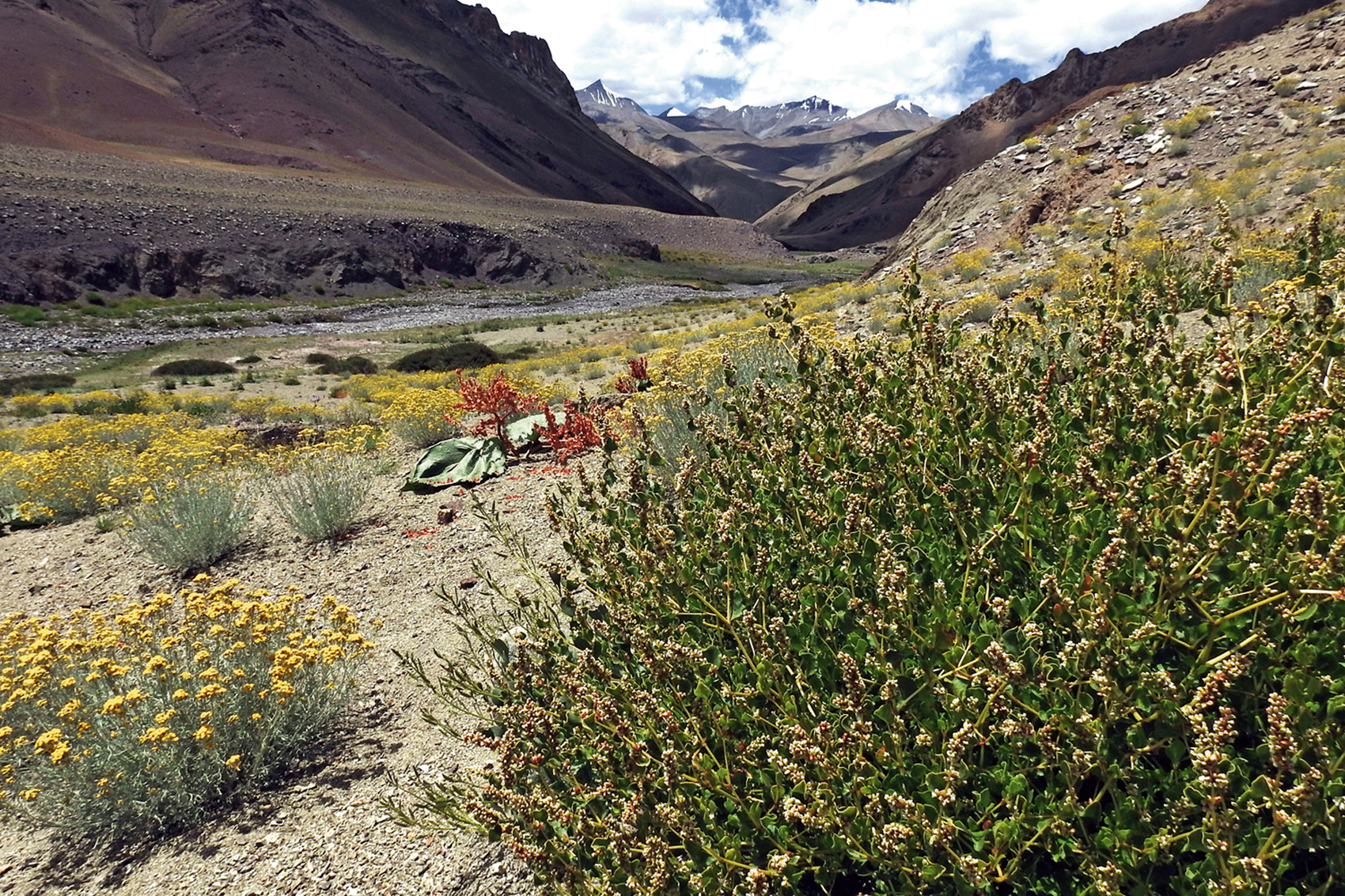 The roots of the spiked rhubarb Rheum spiciforme are used as a laxative. Centuries of knowledge passed through generations enabled Ladakhis to thrive on high-altitude, native, edible plants, for food and medicine. Today young people have much less knowledge and appreciation of this heritage and this must change if they are to survive the coming climate crisis that will hit Ladakh harder than most other places in the world. Photo: Karma Sonam.

Clearly conservation measures are called for, but before that we need to explore and document the plant diversity in Ladakh. Many botanists, mostly foreigners, have worked on the taxonomy of the region’s flora. Ironically, however, the local populace, especially the young, have very little knowledge of this heritage. Given the importance of involving local communities in conservation, the challenges we face can best be tackled by making them aware of their incredible natural history, and to train them on plant identification and further exploration. This would create in the youth of Ladakh a sense of ownership towards the vulnerable habitats that sustain them. While floral species estimates are already astounding, the actual number could be much higher, but this will only be established when systematic and robust taxonomy-based botanical surveys are conducted.

Dr. Konchok Dorjey, professor of botany at EJM College, suggests two ways forward. For in-situ conservation, he recommends the identification of plants and the declaration of plant-diversity hotspots as Protected Area for Plant Conservation (PAPC). He also advises the declaration of woodland areas, including wild juniper forests of Ladakh as Protected Juniper Forests (PJF). Infusing educational institutes and local communities with practical knowledge on ecology and natural history would, in his view, bolster conservation morale and build deep-rooted awareness. For ex-situ conservation, he suggested the establishment of a botanical garden and a ‘Ladakh Plant Conservation Committee’. Collaborative initiatives between research institutes, government agencies and non-profits cannot be compromised on, if efficient conservation strategies are to be employed. 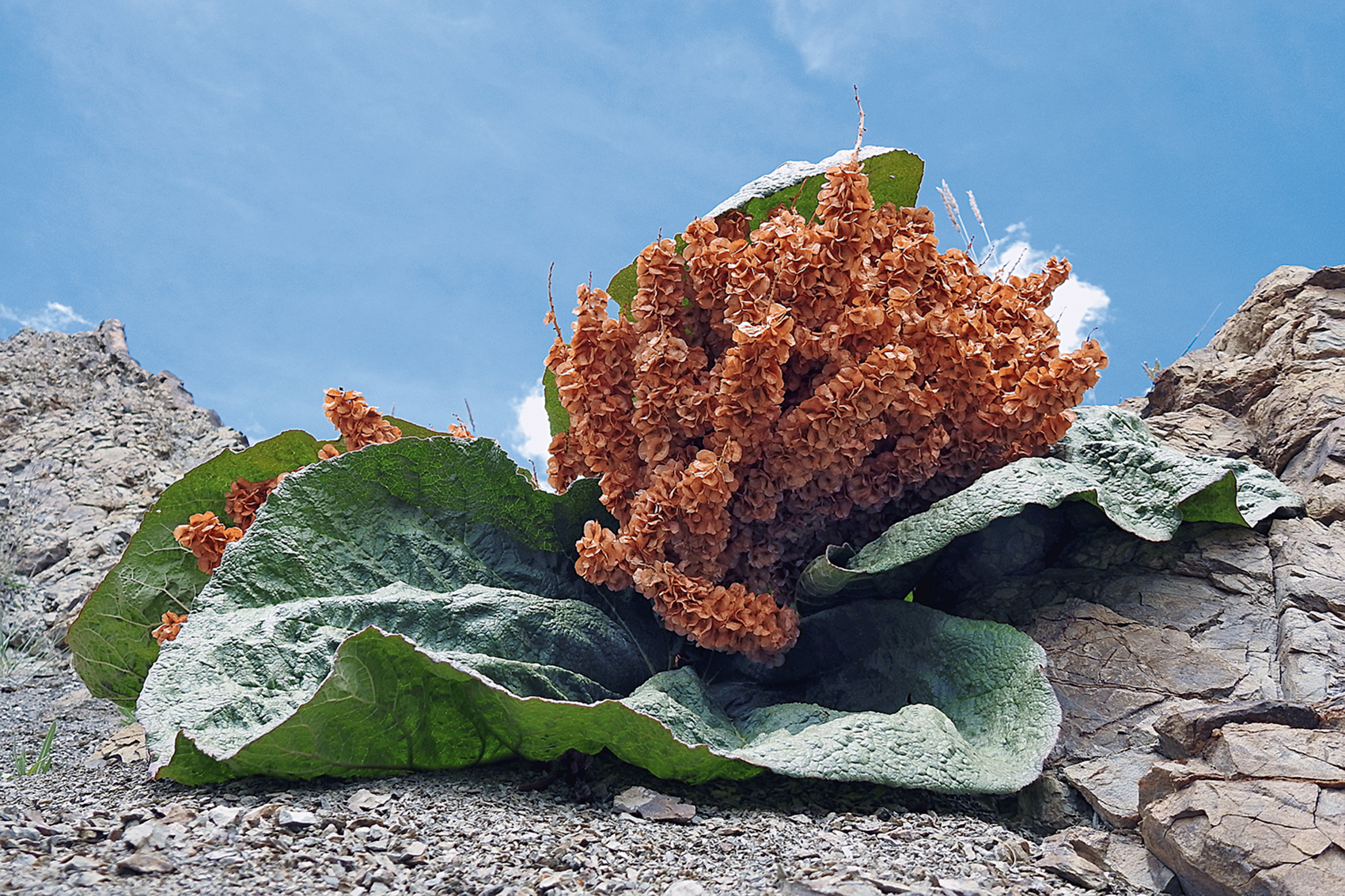 Rheum spiciforme, or lachu, is green when young, but turns reddish-brown on maturity. The fleshy leaves and stems of this robust perennial herb are eaten both raw, or cooked. The plant grows in the Himalaya from Afghanistan to Tibet and J&K. Photo: Karma Sonam.

Howsoever such initiatives take shape, clearly conservation success will only be ours when individuals in all communities are aware of, engaged in and a part of the conservation of the unique, arid ecosystem that has evolved over eons in the cold deserts of Ladakh.

Walnuts (starga) in Ladakh
“When I was much younger, I don’t remember why, my friend and I thought that rubbing the green husk of walnuts on our teeth would make them brighter. So we sneaked some into school, and we rubbed them on our teeth during class time. Our mouth, our hands and our faces turned a dark greenish brown. We both were the jokers of the class that day. We were scolded and slapped by our class teacher. After that incident, I never tried that experiment again. But I have since learned many other uses of walnuts.

“The walnut husk, as you might have guessed, has a very strong colour. It was commonly used to dye traditional Ladakhi clothes. The thin papery brown layer around the walnut seed is rich in antioxidants. I haven’t seen it, but my father told me that they used to boil it and make tea with it. Carpenters commonly use the wood from walnut, apple, and apricot trees to make kitchen utensils, especially ladles.

“Walnuts are great in food too. Walnut oil is an excellent substitute for butter. Walnut and apricot seeds are mixed in with roasted barley or wheat grains and eaten as a snack. Walnuts are also used to make pasta sauce and chutney. Birds love walnut seeds too. Magpies pick them from the trees and hide them in the ground. In October, when we harvest potatoes, we find a lot of walnuts hidden in the earth.

“In older times, walnuts were grown mainly in the Sham area. People from Sham would bring them to Leh bazaar and barter walnuts and apricots for pashmina and other things.”

A Flock Supervisor at the Sheep Husbandry Department at Leh, Ladakh, Phunstog Dolma receives funding support from Sanctuary’s Mud on Boots Project, as a Project Leader and is being advised by Munib Khanyari.