Bhagajang: A High-Altitude Wetland In Tawang

In the Bhagajang wetland complex of Arunachal Pradesh, snow and ice are a way of life for most of the year. When the snow stops, the rains start. During the small windows of sunshine and relatively fine weather, the mountains transform into a vista of flowering herbs alternating with mirror-like lakes, still in the mountain sun. Buddhist pilgrims, an army outpost and livestock herders soon arrive to take advantage of the weather and foliage.

Located between 4,000 and 4,500 m. above sea level in southwestern Tawang district, Bhagajang is a typical high-altitude wetland. At this altitude, trees thin out before disappearing completely; the area between where trees stop growing and the snow line is a mesh of marsh, meadow, fen, peat land and waterbodies - these are the high-altitude wetlands. These regions are considered one of the richest vegetation zones in the world, part of the Eastern Himalaya biodiversity hotspot. Indias National Wetland Inventory and Assessment suggests that there are over 1,600 high-altitude wetlands in Arunachal Pradesh alone, of which more than 200 are in the Tawang district. The Western Arunachal Landscape (WAL) Conservation Programme of the World Wide Fund for Nature India (WWF-India) has been working in this area and I met with their researchers to understand the region better and came away impressed by the dedication and emotional connect these young persons had with the landscape they sought to protect.“

On my first visit on a bright sunny morning, Bhagajang opened up an amazing vista," said Jaya Upadhyay, a researcher with the WAL Conservation Programme, adding, “From the top of the ridge we could see a couple of lakes, the gompha (monastery), yaks in the meadows, flags fluttering and distant bells ringing - it was ethereal." 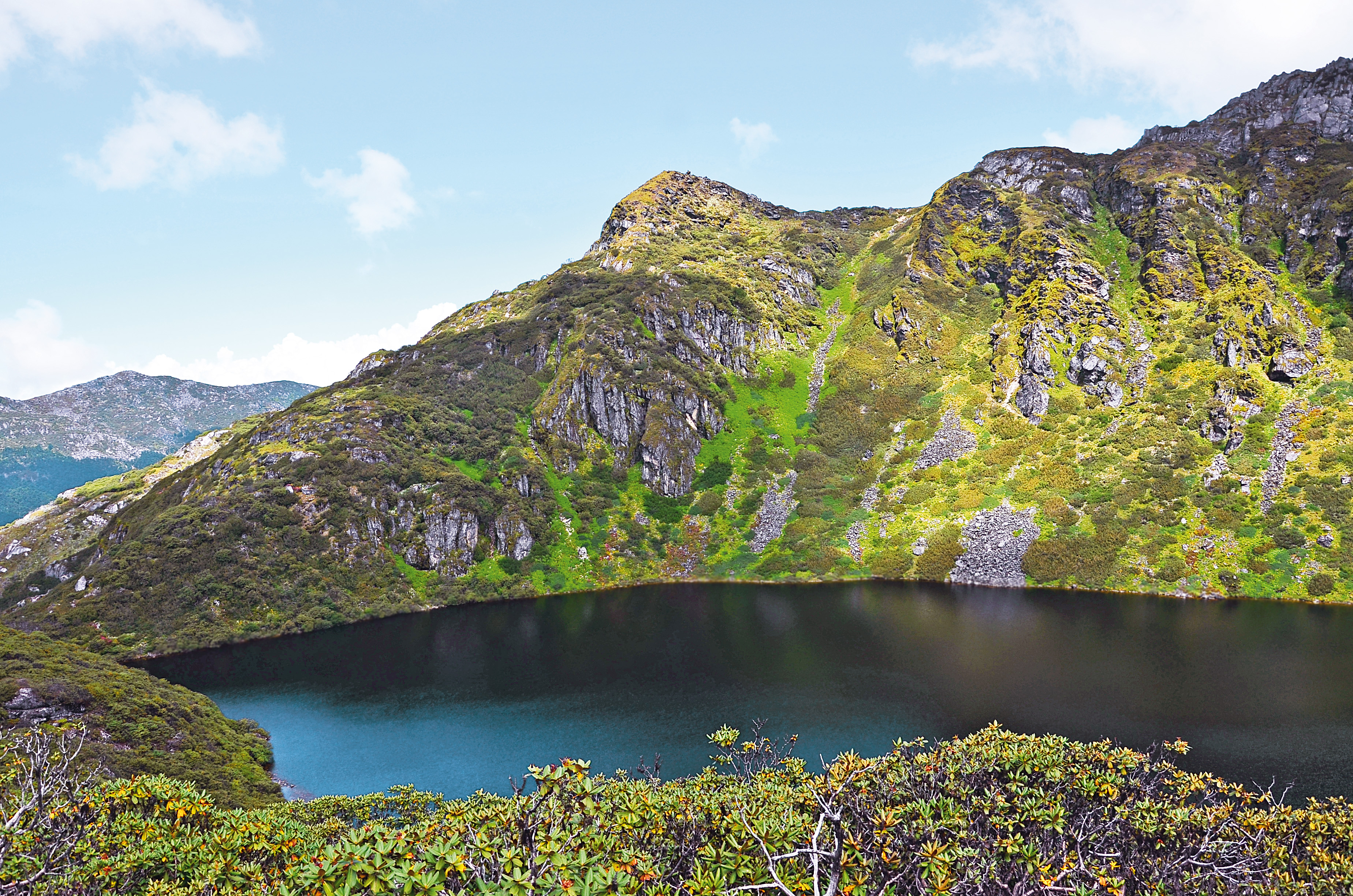 The awe-inspiring mountains surrounding the Bhagajang Wetland Complex transform into a vista of flowering herbs in August and September, embellished by mirror-like lakes such as the Gonpo La Tso located at an altitude of 4,174 m. Photo: Jaya Upadhyay.

The WWF team used the gompha located in the heart of Bhagajang as their base camp, from where they began documenting the flora and fauna to build their database. Bhagajang is crisscrossed with streams that flow around large black rocks, with herbs including Aconitum, Bistorta and Meconopsis flowering near the water courses. With deep roots and cushioned leaves, the herbs transform the area into a riot of colours when it is warm and the snow melts. On the meadows, grasses and forbs (annual herbs) form tussocks, and shrubs form ‘krummholz, a structure typical of alpine areas comprising vegetation that is deformed and stunted by fierce, freezing winds.

Describing the lay of the land Upadhyay says, “From where we camp, we can see the open meadow on one side, with grasses and small herbs flowering; but down by the lake, thick, short bushes of Rhododendron and junipers are found… like someone fenced in the bushy vegetation."

The Western Arunachal highlands witness the thinning out of trees at around 4,000 m., to form ‘the treeline beyond which trees cannot take root. A study by former (WAL) coordinator Pijush Kumar Dutta in the Tawang and West Kameng districts, revealed the presence of 122 species from 29 families in the treeline zone.

Rhododendron, I learned, were the most common genus. Of the 18 species recorded from the area, 17 are found nowhere but the Himalaya, and 14 only in the Eastern Himalaya. “The diversity of Rhododendron here is amazing," said Upadhyay. “Unfortunately, Bhagajang is covered in snow and is inaccessible during much of the Rhododendron flowering season and identifying the different species gets a little confusing." 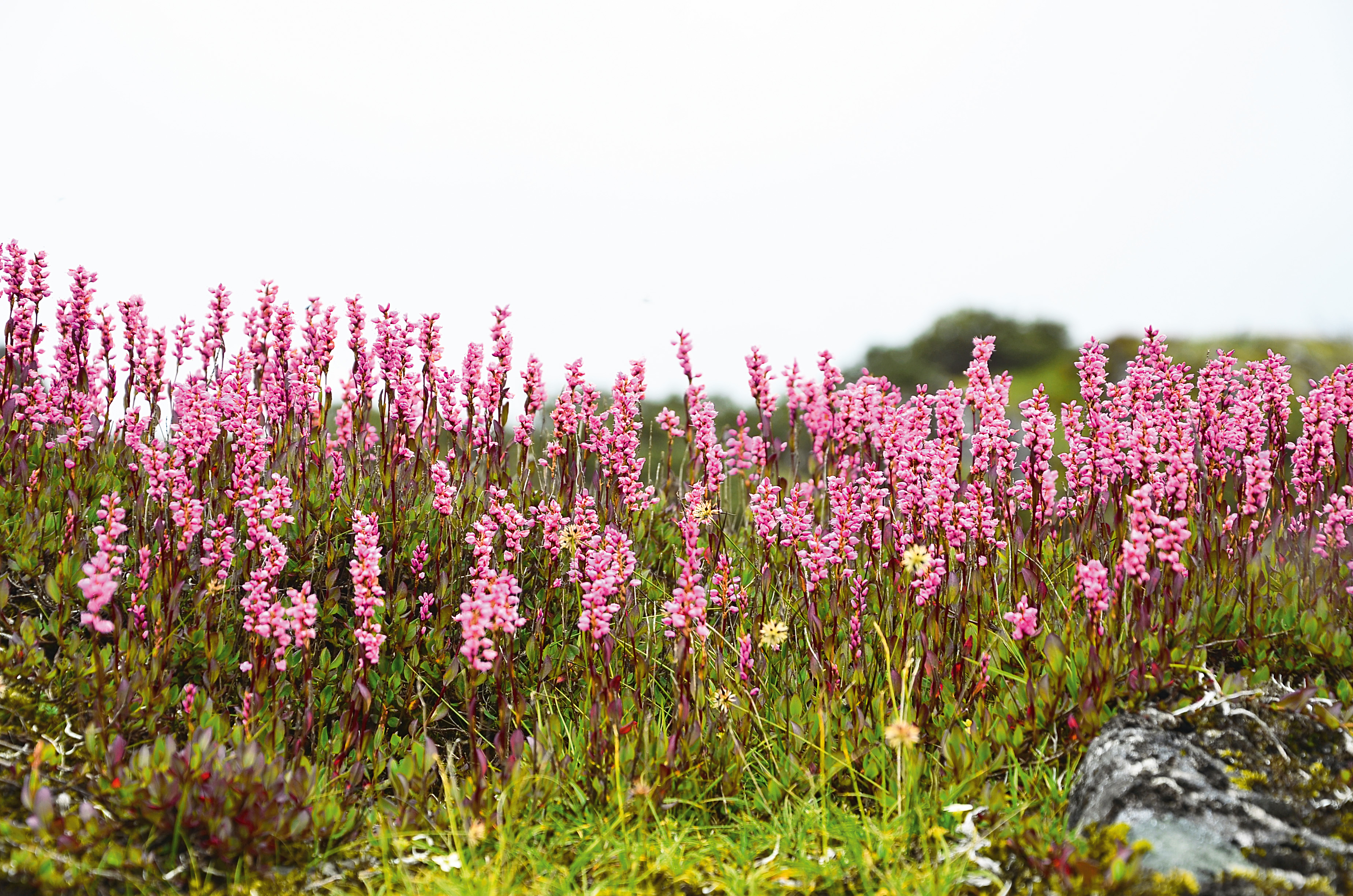 Bistorta affinis (seen above) and other species including Aconitum and Mecanopsis, grow near streams in these wetlands presenting a magical and very colourful spectacle. Photo: Jaya Upadhyay.

Rajarshi Chakraborty joined the Western Arunachal programme in 2007, and much to his delight, was asked to survey the wildlife in Bhagajang: “I knew that direct sightings would be very hard to come by, thats the nature of the area. Animal densities are very low; forage density is very low for ungulates," he said. Sighting blue sheep or bharal he discovered was relatively easier because these sure-footed animals roam around in large groups. The other Himalayan ungulate, the musk deer, is solitary and extremely shy, making it difficult to spot. The sparse vegetation also supports goats like takin, the Chinese goral and red goral.

“Wherever you see blue sheep, you could possibly see a snow leopard, if the terrain is right," said Chakraborty. The team found signs of the snow leopard in the remote areas of Tawang district, close to Bhagajang, leaving Chakraborty in a state of perpetual hope. Incredibly, he confirmed that another top predator, the wild dog also manages to survive in the most inaccessible, barren areas, often at altitudes of 4,000 m., where few animals manage to survive.

The elusive tree-living red panda is found in the lower elevation temperate forests around Bhagajang. The Indian pika and red fox have also been observed near the lakes. Chakraborty and Upadhyay say, however, that most of their information came from interviews with livestock herders and monks from the Bhagajang gompha. Confirmations of sightings came after animal descriptions were shared together with images of the animals. The interviews confirmed the presence of musk deer, Himalayan weasel, dhole and Himalayan marmot. The next step now is to use camera traps for irrefutable proof of presence.

But Chakraborty confessed that his true passion lies with birds. “There are several endemic Himalayan species found in the WAL including Blyths Tragopan, Beautiful Sibia, Wards Trogon and Sclaters Monal Pheasant. The Eastern Himalaya and Assam Plain are well known for their endemics with as many as 24 species found only here, 21 of which occur in Arunachal Pradesh. 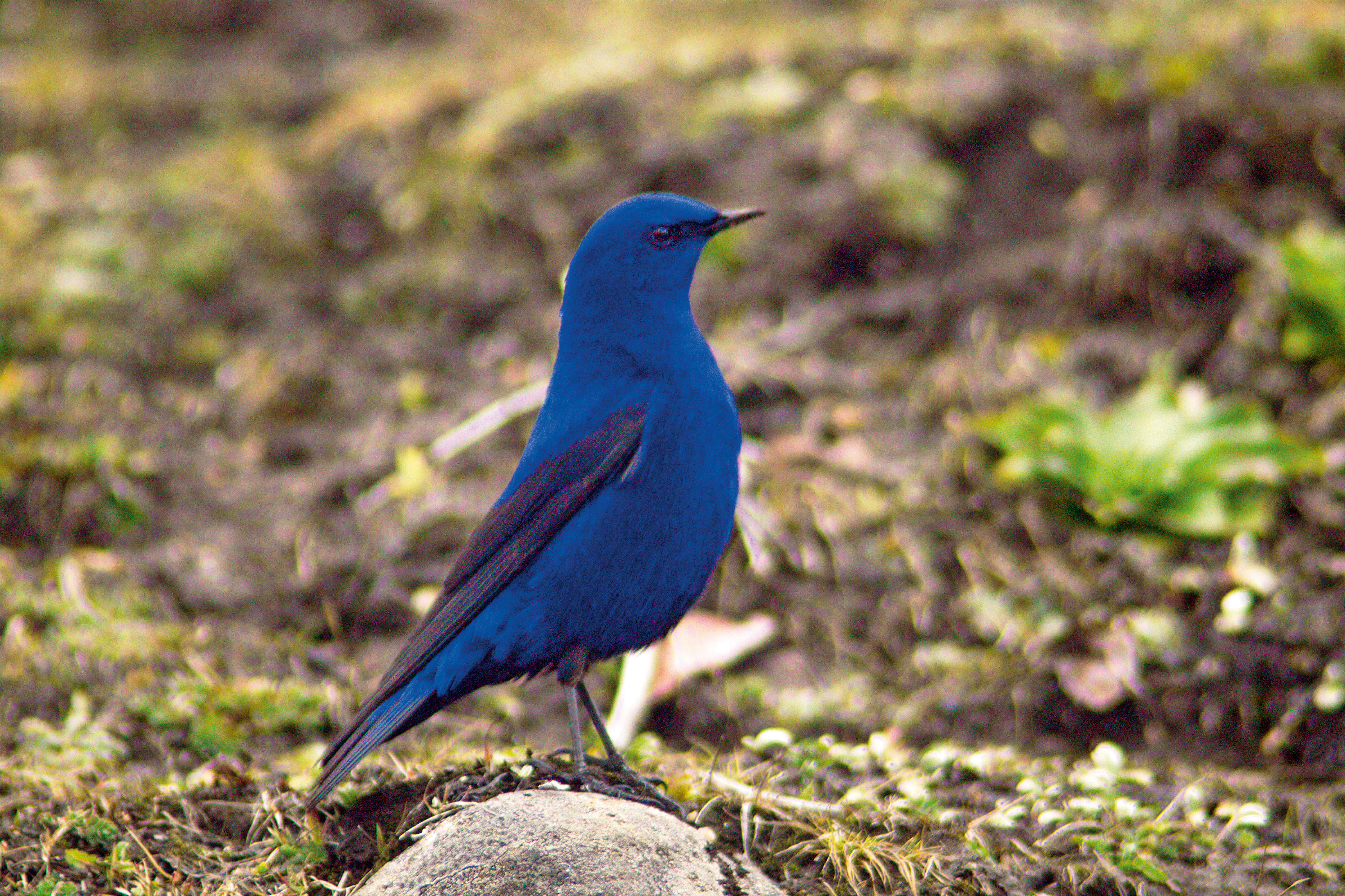 The Grandala Grandala coelicolor is one among many stunning Himalayan birds found in the Western Arunachal Landscape. Photo: Jaya Upadhyay.

The post-monsoon flush at Bhagajang heralds both the herding and the pilgrimage season. The wetlands are under the control of the Tawang monastery, the largest monastery in India and the second-largest in Asia, considered one of the most important seats of Mahayana Buddhism. The monastery itself owns large livestock herds, mainly yaks and dzos (yak-cattle-hybrids).

The herders are Monpas, one of the main ethnic groups of Arunachal Pradesh. The tribe largely lives in West Kameng and Tawang districts, and are famous for wood carving and carpet and cloth weaving. Among the Monpa, pastoralists called the Brokpa thrive on a livestock-based economy, and have been using the natural pastures for their yak and sheep for over a millennia, moving upslopes and down to the valleys as the weather commands. Not surprisingly their yak ghee (clarified butter), milk cheese (churpi) and products fabricated from animals skins are legend.

Twelve of the 20 lakes at Bhagajang are deemed sacred, and come with their own folklore. In the months of August and September, the festival Asalha Puja or Dharma Day, is celebrated on the full moon of the eighth month of the Buddhist calendar. Thousands of pilgrims from Arunachal Pradesh and neighbouring Bhutan make the arduous journey to the gompha at Bhagajang. They also visit the lakes, offering scarves and balloons as a sign of respect.

Worship is one thing, but the already sparse vegetation does get hammered by pilgrims and herders, to meet their cooking and heating needs. What is more the waste generated is dumped indiscriminately. The WWF, in collaboration with the Sashastra Seema Bal (SSB), a paramilitary outpost, the Environment Protection Society and the Bhagajang monastery conduct awareness programmes and cleanliness drives for pilgrims.

Pema Wange, a Monpa tribal working with WWF since 2007 told me that they provide high-altitude tents and kerosene stoves to pilgrims at reasonable rates to reduce the pressure on trees. Additionally, toilets and garbage bins have been placed at regular intervals. Signages on the importance of the wetlands, with instructions for pilgrims are up at strategic points.

“We get people from Arunachal and Bhutan, who speak different languages so we select boys from each language group, to educate their own groups," says Wange.

All this is conservation in action in a very difficult arena. Wange, Upadhyay and Chakraborty believe they are making a difference. “The pilgrims are good people. They understand when we explain that the fragile habitat is a natural water source and a lifeline for the very wetlands on which everyone depends," says Wange, who was born and brought up here, and relates easily with the pilgrims. 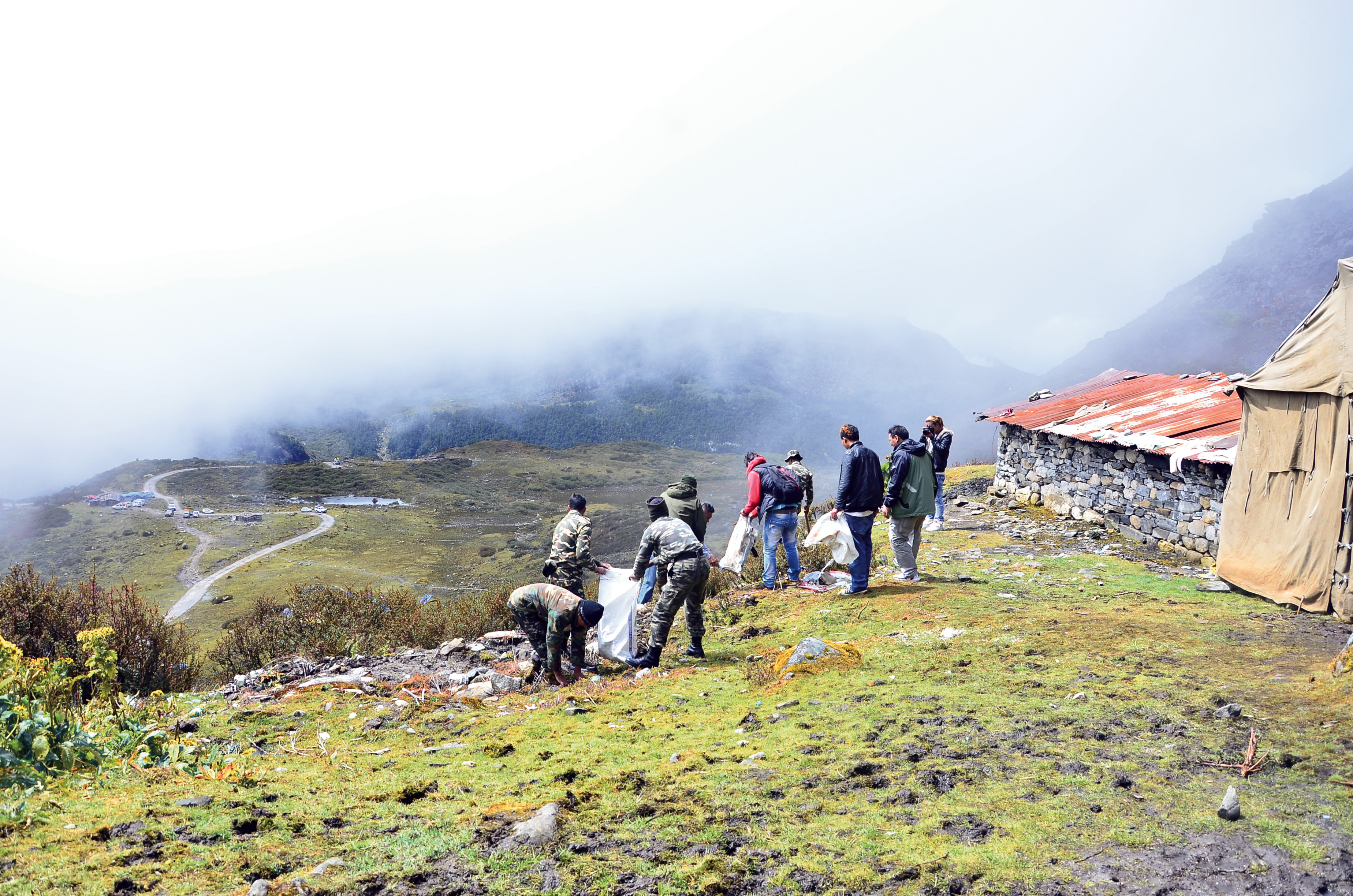 Several NGOs are working together to conduct awareness programmes. All the issues that threaten the beautiful Bhagajang wetland area are resolvable, but we must first value such destinations. Photo: Jaya Upadhyay.

Conservation in remote areas such as Arunachal Pradesh must follow different strategies from those being implemented in other parts of India. To begin with, roughly 60 per cent of the land in Arunachal has been owned and controlled by local indigenous communities, not forest departments. Without the total trust and involvement of the community, these ecologically rich areas cannot be protected for posterity. This is why WWF has initiated community-based tourism on a trial basis for five villages in West Kameng and Tawang. Three community-based conservation areas have begun protecting biodiversity, with villagers being trained to run homestays, hygienic restaurants with functional kitchens and even to use the computer! Programmes that enabled them to visit Ladakh and Sikkim to personally understand ecotourism concepts have been very successful. Campsites are being developed, and camping equipment is being made available for hire and use. Some villagers patrol their community-conserved areas, and have begun documenting their biodiversity and even introducing community controls to curb illegal hunting.

I have absolutely no doubt that such alternative livelihoods, which are based on the restoration and regeneration of both habitats and wild species, will ease the pressure on the fragile flora and fauna of the area in the coming years. And what is most encouraging is the fact that the process of returning health to their own homeland promises to deliver economic independence and pride to the Monpas and Brokpas.