Conservationists and field biologists often speak and write of ‘empty forests’ referring to wildernesses where most large mammals, birds and reptiles have been wiped out by poaching. Any surviving animals are elusive and, not surprisingly, wary of humans. However, few people discuss ‘empty wetlands’ or ‘empty jheels’. This is what I witnessed in Bihar where I spent four days in the Bhagalpur district in December 2021.

I was hoping to sight Greater Adjutants that Arvind Mishra and the Bhagalpur Forest Department have been trying to protect over several years. Arvind, one of the first to discover these birds in Bihar, is a conservationist at the forefront of efforts to protect them in the state. He first discovered a small nesting colony of Greater Adjutants in 2006. Recognising the need to protect the birds, he embarked on creating awareness among local villagers. With their support, and that of the Forest Department, he has been able to ensure their safety. However, while Greater Adjutants are faring well, the same cannot be said about other bird species in Bhagalpur.

Bhagalpur is located on the banks of the Ganges river, with vast, flat floodplains in every direction. We surveyed Khairpur, Bagri-tola, Ganganagar, Qasimpur, Maradhar, Gurusthan, Bihpur, and Bornahadhar villages, where the Greater Adjutants either nest or forage. Heavy rains in October 2021 had left most of the area flooded, creating an ideal habitat for waterfowl. However, the birds were missing.

During my time there, I did not see any migratory duck flocks. Even the usual Common Moorhen, Purple Swamphen, Little Grebe, and Indian Spotted Duck were missing. I did see large flocks of Asian Openbill, egrets, and scattered flocks of whistling-ducks, both Fulvous and Lesser. A smattering of Lesser Adjutants, mostly single birds, were encountered but the jheels and flooded crop fields, which should have attracted thousands of birds, were otherwise empty. As far as I could see, shallow jheels or rich grazing land were visible from the roads and vantage points and the absence of waterfowl and waders was perplexing. I soon realised that bird trapping and poaching for both consumption and sale was rampant and widespread. All waterfowl species were vulnerable – ducks, geese, coots, waders, crakes, moorhens, kingfishers, mynas, starlings, and babblers.

I saw extensive trapping of fish using plastic mosquito nets (officially banned) that do not spare even eggs and fingerlings of fish. Aerial nets were spread over the jheels across tall bamboo poles to catch unsuspecting birds. We found evidence of bird netting everywhere. The jheels, flush with emergent, floating and submerged vegetation – ideal food for ducks – were being swept clean of birdlife. 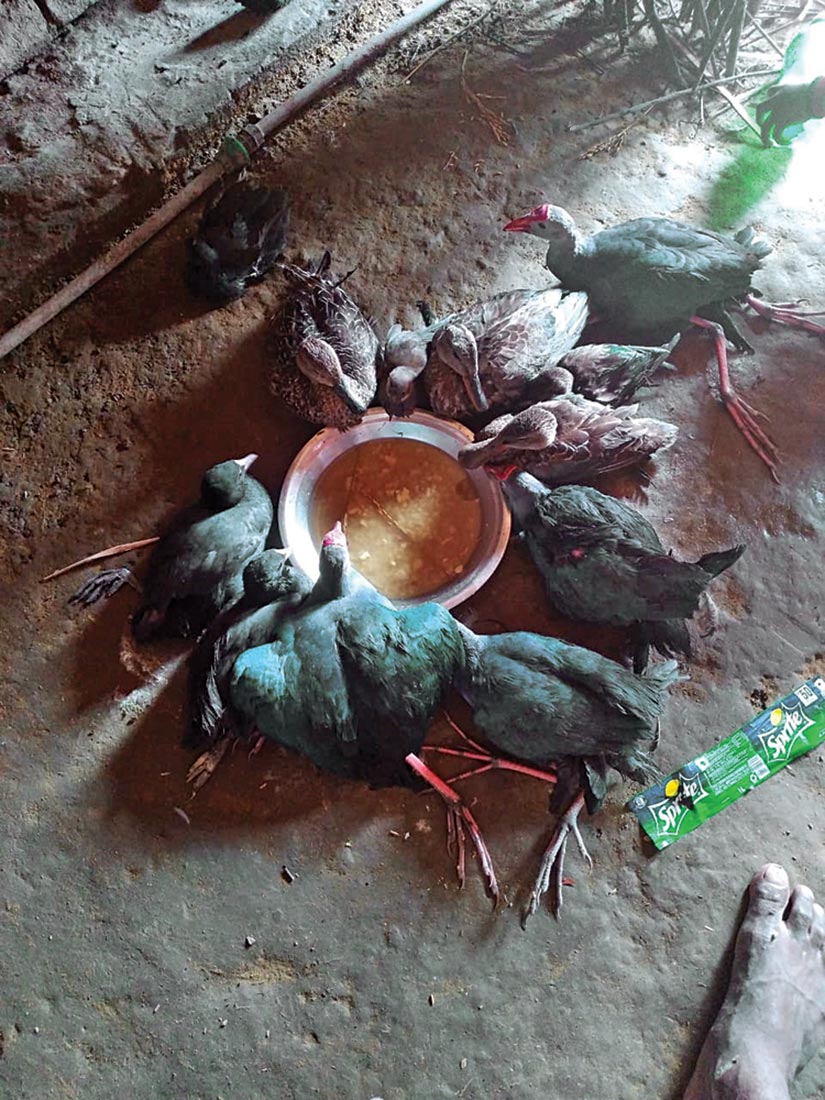 Trapped Grey-headed Swamphens, Common Coots, Northern Shovelers and other waterfowl with broken legs waiting to be sold in Bihar. The author suggests that illegal bird trapping is a social issue, and the root causes of poverty, illiteracy, and lack of livelihood options need to be addressed. Photo: Pankaj Choudhary.

Trapping and hunting of waterbirds has been a traditional activity and a source of income and protein in our country. Trapping and sale were not illegal till 1972, when the Indian Wildlife (Protection) Act was enacted. Like all social game-changers, it took almost a decade to curtail trapping and close bird markets. Some traditional trappers went to court but lost their plea. Now in most states, wild bird trapping and sale has almost vanished – at least openly. We have to accept that like other crimes, some illegal trapping/shooting will continue, but for the most part, large-scale trapping or shooting of waterfowl is not seen in India. However, Bihar is different.

Bird Trapping – A Way Of Life

Bihar has a notorious history of bird trapping and the open sale of waterfowl in urban and rural areas along roadsides is common. In the 1980s and 1990s, on my way to Assam by road via Bihar, I had seen ducks being sold in Manjhaul and on national highways. Ducks, geese, waders, crakes and waterhens are trapped and cooked in households or sold. The only areas that retain a good population of waterfowl are protected wetlands such as Goga-beel, Nagi-Nakti, and Kusheshwersthan.

A few birds such as Asian Openbills and egrets are spared as they are considered useful for agriculture. The Asian Openbill, for example, preys on apple snails Pila globosa that damage crops. Greater and Lesser Adjutants now receive protection due to extensive publicity, and besides, are not believed to be very palatable. These large birds are also not easy to hide and so trappers do not target them. The same is the case with Whistling Ducks, which even the late Sálim Ali called tasteless. Everything else is kosher!

Local conservationists have spoken of extensive bird trapping in Bhagalpur and other districts. While authorities are aware of the problem, it is too large to be solved by the under-staffed Forest Department with its limited financial resources. Safeguarding officially declared Protected Areas itself is a challenge and so monitoring outside PAs is almost impossible.

Greater Adjutant Saviour
Arvind Mishra, a pharmacist and birding enthusiast from Bhagalpur, was delighted on learning that the Greater Adjutant, a bird mostly known from Assam in India, is found in Bihar. His own search for them resulted in their sighting in a farming village called Kadwa Kosi Diara, in the Kosi river’s floodplains. With the aid of funds from a non-profit, Arvind along with members of his NGO Mandar Nature Club began keeping a watch on the birds, recording around 178 of them and 18 nests. Soon his enthusiasm and persistence resulted in the local community joining him in his efforts to protect the Greater Adjutants. He highlighted the importance of these birds to farmers as they are natural predators of prey such as rats and snakes. Today, the Greater Adjutant population in the state is improving and the local community is a key player in this success story.

Illegal trapping is not only an administrative issue, but also a social one. Extreme poverty, under-nourished people, young jobless men, and people trying to eke out a living to survive, are all a reality here that we cannot ignore. Despite their problems, I always found the people of Bhagalpur to be hospitable and friendly with a ready offer of chai to visitors. And not everyone is a trapper. Some even place nets below the storks’ nests to rescue fallen chicks.

Administrative action against bird trapping alone cannot solve the issue. We have to address the root causes – poverty, illiteracy, and a lack of livelihood opportunities. Besides strengthening the Forest Department with more staff and resources, we need to ensure that the government’s welfare schemes are implemented efficiently to improve the financial conditions of locals. Trappers must be directed to alternative livelihood opportunities through skill development and training. Despite the enormity of the task and the myriad challenges, if social and environmental NGOs work hand in hand with the government, positive change is possible. 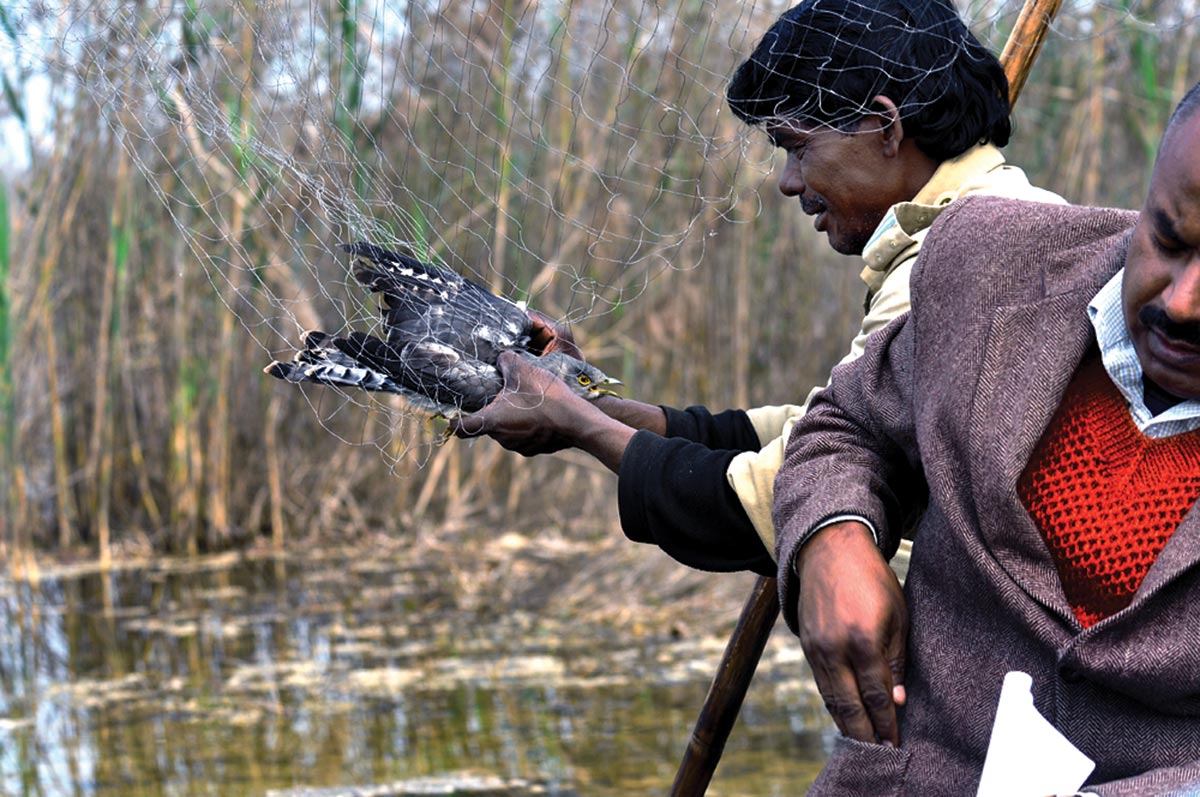 A recent report by the Wildlife Crime Control Bureau (WCCB) confirms a drastic drop in wildlife crime in 2021. According to data available with WCCB, provided by state forest and police authorities, in 2019, 805 cases were registered which dropped to 281 cases in 2021. WCCB has, over the years, initiated specific actions to control wildlife crime, such as Operation Save Kurma (for turtles), and Operation Thunderbird (code-name for INTERPOL’s multi-national and multi-species enforcement operation for wildlife protection). A similar operation for waterfowl by the WCCB in Bihar and other states is vital to address large-scale trapping of birds in the state and elsewhere in India.

With the right kind of protection that involves local communities, the ‘bird-empty jheels’ of Bihar can attract hundreds of thousands of waterbirds, bringing tourism that can provide many livelihood options. The Bihar floodplains are strategically located in the middle of the Central Asian Flyway and will be visited by millions of birds, provided they are allowed to stay, and are not directed to a cooking pot!

Asad Rahmani was the Director of BNHS (1997-2015), and has authored several books, scientific papers and articles. His main interest is in grassland and wetland birds.