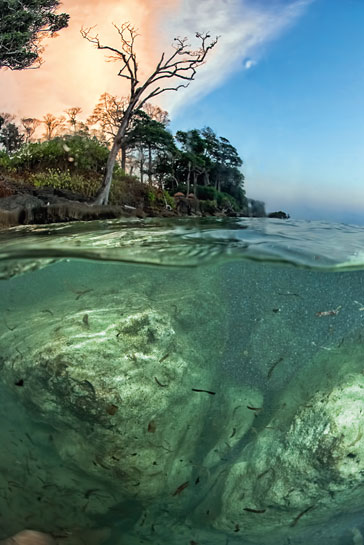 On a jagged mossy rock, a Pacific Reef Egret leans forward, motionless. As though admiring its own reflection. A wave breaks against the rock, sending salt spray and fish towards the patient hunter. Snap! Fish make their way into the hungry predators mouth.

Binoculars down. Pan out. Two plainclothes researchers (GK and Chutney) jump out from behind a fallen bulletwood tree onto a south Andaman Island beach.

GK: Whoa! Did that egret just catch a fish out of the sea? I thought they stick around forests and fields in the company of deer and cows.

Chutney: True… but here we are where forest and sea meet. So, when Im not diving, I go birding.

GK: I dont know, I like birding here, but shore birds are confusing. And frankly I know nothing about the sea.

Chutney: Learn to dive. Its a different world underwater. Corals are ‘rainforests of the sea.

GK: Are you serious?

Chutney: I am. Plants and animals exhibit similar adaptations even in the marine world. Safety in numbers, colour means poison, symbiosis!

By now, you must be familiar with living in and breathing the nitrogen-oxygen mixture that we call air. Life in the sea is different. To start with, it is salty and continually in motion. If the currents dont take you from one ocean basin to another, the tides will see-saw you, roughly every six hours, to land and back.

Life is governed by physical factors we scarcely notice on land. Take density. A cubic metre of seawater weighs 1,025 kg. on average, while the same volume of air at sea level weighs just 1.275 kg. Thats more than 800 times the weight on each square inch of your skin in seawater than in air. Then, theres depth. As you go deeper, a whole range of conditions - temperature, pressure, light, nutrients… change around you.

While conditions are practically the same at 10 m. above sea level, at a depth of 10 m. the increase in pressure from one atm. to two atm. significantly affects buoyancy (atm. represents the standard atmosphere, a unit of pressure defined as 101325 Pa. (1.01325 bar.). Sunlight intensity falls to 22.2 per cent, altering vision and affecting photosynthesis.

To cope with these and numerous other properties of the sea, animals and plants have evolved specific adaptations to their physiology, probably much before life ever existed on land. Ultimately, in water or on land, cutting through waves or winds, in a recovering reef, or an old growth forest, organisms strive towards the same goals - food, mates and safety. These could involve intricate camouflage, travelling in large numbers or living in highly-structured bee-like colonies, behaviours with which we are familiar. Marine and plant communities are also composed of generalists, specialists, commensals, mutualists, parasites and cheaters! 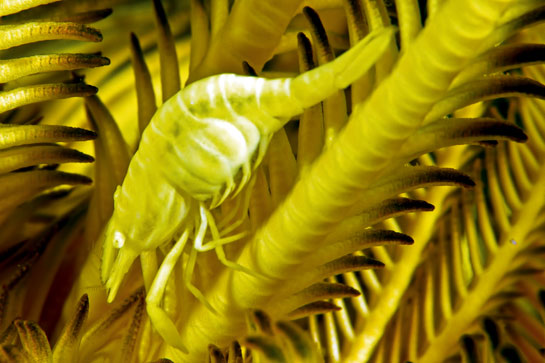 GK: From what I remember of high school biology, the biomass pyramid of marine ecosystems looks like an inverted version of the terrestrial pyramid. Are these two ecosystems fundamentally so similar after all?

Primary producers form the base of the food chain, or the lowest trophic levels in a biomass pyramid. They generate the energy taken up by consumers stacked at different levels. When a consumer eats a producer, much of this energy is already used up and only a fraction gets transferred, progressively, along the food chain. This is true for forests as well as oceans - whether its a hornbill gulping down fruits or a dugong vacuuming up seagrass.

When we think of primary producers in an ecosystem, we tend to think of grasses, plants and trees. In the ocean, microscopic phytoplankton and macroalgae dominate this category. So, in a forest biomass pyramid, where the base of the triangle is broader, trees have a much higher total mass compared to herbivores and predators (deer and tigers perhaps). In the ocean, the total mass of herbivores and predators (parrotfishes, sharks or whales) can instead be higher than the mass of phytoplankton.

So how do all these consumers higher up in the pyramid obtain enough food? Because of the sheer rapidity with which new phytoplankton are produced to replace what is eaten and removed. These are then consumed and replaced (turn over) at a much faster rate (roughly two to six days) than their longer-lived counterparts (trees) in the forest (average 19 years!).

Chutney: Right! Some fundamental characteristics that shape these ecosystems are very different. You should explore this world for yourself!

GK: I dont know. In a forest, all I need to know is how to walk. You want me to learn to dive, wear fins, breathe through my mouth, strap on MORE weight...

Chutney: Anyone who has had a common cold and a blocked nose knows how to breathe through their mouth. Relax… it will all come naturally. And youll barely notice the dry throat. Once you are down there you will celebrate your new-found freedom, watching colourful reef life… parrotfish, goatfish, rabbitfish, butterflyfish… all in huge feeding schools.

GK: They come together? As in different species that eat different things school together? Like mixed feeding flocks of birds?

Chutney: Surprised? And I havent even mentioned migration yet!

Few sights on land are more spectacular than the great annual wildebeest migration set against the Serengeti sun, a classic example of animals socialising and cooperating with others of their kin to ensure survival. Large-scale seasonal movements like these, towards better food and warmer climes have been closely observed in mammals and birds. But they happen underwater too. There are species of whales, sharks, tuna, seals, turtles, even invertebrates, that periodically migrate in massive congregations, some for thousands of kilometres… all in search of feeding or mating grounds. Like their terrestrial cousins, they repeatedly use the same routes (‘corridors) and they do it with puzzling precision, following the same currents that lead them to the same destinations.

Its not just ‘birds of a feather that flock together. You have probably seen bulbuls, babblers, warblers and a squirrel or two feeding on the same tree, calling loudly. Thats not a coincidence. Its a special association of species, which may have entirely different food preferences. We call them mixed species feeding flocks. Like a typical high school gang - such assemblies have (often noisy) ‘leaders, ‘followers, and a lookout or two. Mixed species flocking is not exclusive to tropical forests. This works for herbivores in African savannas, and coral reef fish too. Why should a herbivorous parrotfish want to team up with a goatfish that primarily feeds on crustaceans and worms? Well, there might be multiple benefits- ‘many-eyes (and many types of eyes) to spot predators, more muscle to bully others for their lunch, or better chances of finding resourceful patches.

GK: Interesting that terrestrial behaviour patterns are shared by marine creatures too. But I still think the experience of ‘cruising over a coral reef doesnt match up to walking through a forest. No forest sounds - the wind howling, leaves rustling, birds calling...

Chutney: True. Youll hear none of that. But have you ever heard the sound of silence… punctuated only by the rhythm of your own breathing? The hiss of every breath you take in and the bubbling of every breath you breathe out is hypnotic. And hovering silent and weightless in animated suspension, is strangely meditative. Its very like a solitary walk in the woods. Of course, if you had a hydrophone to eavesdrop into the world of fish communications you would hear grunts and purrs, hums and hoots and who knows what else! 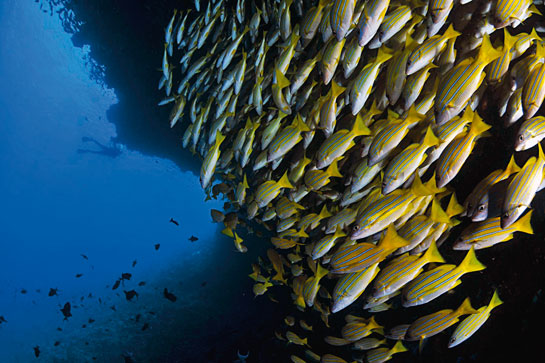 GK: Wait. Fish vocalise? Without voice boxes? Okay you got me. I'm going to learn to dive. But my heart will always belong to tropical forests. And in the process I could help the sea by reducing siltation… anathema for coral reefs.

Chutney: True, and the favours are returned. Healthy reefs absorb the shock of strong winds and waves, protecting coastal habitats from catastrophic damage.

GK: Also true. But look at the bigger picture. Tropical forests are carbon sinks that slow climate change and secure our future.

Chutney: Trust me, the sea sequesters more carbon than the land does! And climate change seriously affects oceans too. A warmer atmosphere is changing current regimes between ocean basins, which in turn changes global climate.

GK: The El Niño effect right? That has actually affected rainfall patterns everywhere this year. But our problems on land are so much greater. The oceans are so vast and the forests almost gone, fragmented or taken over by alien species.

Chutney: No denying that… but oceans are being assaulted too. Invasive species are a threat here too. And warmer waters and elevated CO2 concentrations are killing marine life at global scales. On top of all the development along coastlines… the dumping of pollutants and the extirpation of millions of tonnes of marine organisms (to name just a few!) weakens the ability of our oceans to cope with climate vagaries, or recover enough to sustain themselves.

GK: Its a vicious cycle. Everything is linked. All processes are connected. *GK and Chutney stop at a small tea shop for hot lemon tea on their way back to the research base.

GK: I suppose we can talk all day about how different or similar these two ecosystems are. But theres no disputing how valuable both are to us, how dependent they are on each other and the degree to which theyre both in peril!

Chutney: Precisely. Just when scientists are starting to develop sophisticated technologies to study fish communication, the levels of noise pollution in the ocean have escalated. Similarly, there isnt enough time to make sense of how and why some distinct coral species choose to hybridise, since weve already lost more than half of what existed to coral bleaching, in the past 10 years. 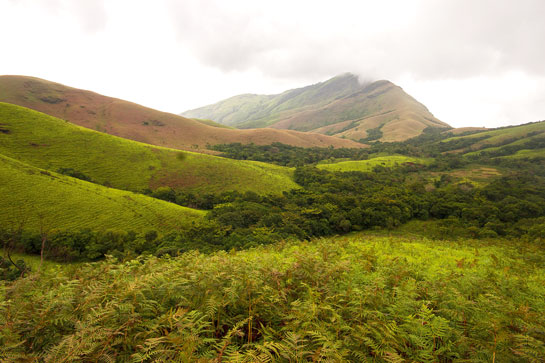 Its time we explore, learn, talk and focus more on oceans… without their planetary services, even the tall green tropical forests whose origins lie in the big blue ocean deeps, would vanish!