The arboreal (tree living), quadrupedal (using all four limbs for climbing), nocturnal (active at night), beautiful slender loris is a tailless primate (like us!) that moves with ease high up in the canopies of trees! text and photographs by Kiran Thomas

The arboreal (tree living), quadrupedal (using all four limbs for climbing), nocturnal (active at night), beautiful slender loris is a tailless primate (like us!) that moves with ease high up in the canopies of trees! 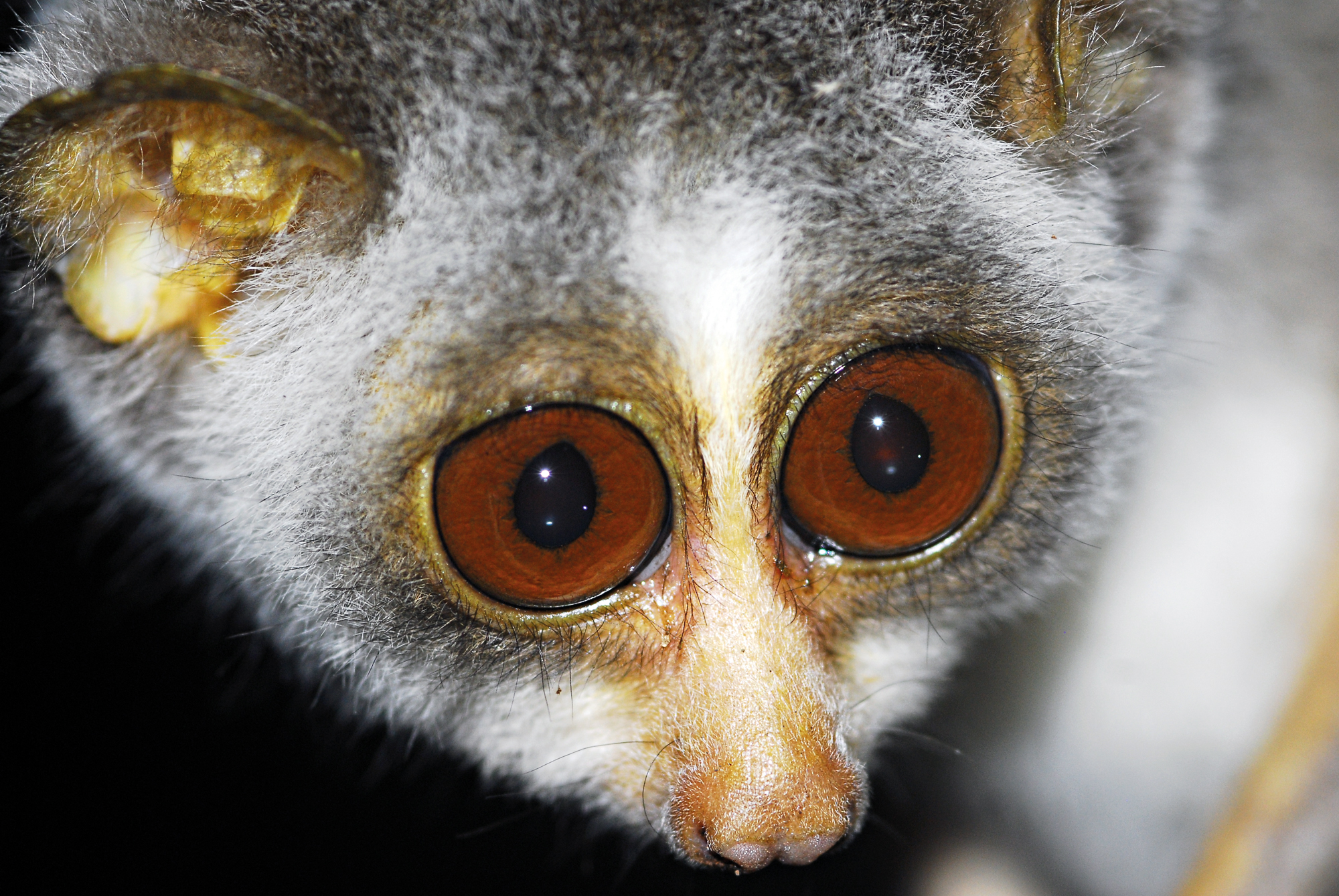 After investigating the distribution pattern of the grey slender loris in the Chinnar Wildlife Sanctuary in the southern end of the Western Ghats in Kerala, we performed ‘night transects’, driving or walking to hand-count the species, using flashlights to illuminate our path

Forest of the night

During our transect, we walked around 54 km. through the forest and found hundreds of glowing eyes staring back at us across the canopy, as the shrill chirps of crickets, deep hoots of owls, and the low sawing of leopards accompanied us. 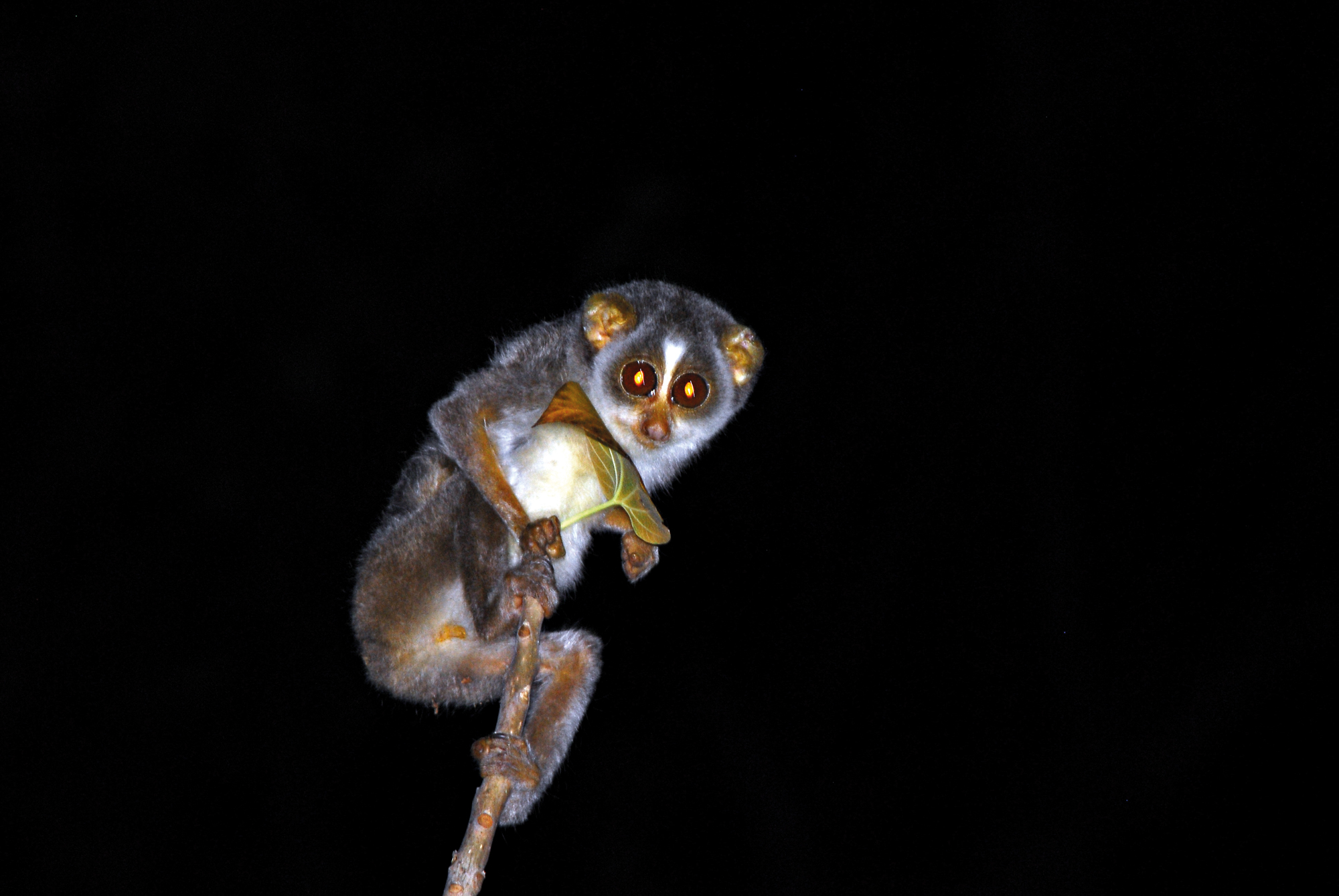 Slender lorises have a distinctive orange-red eye shine – meaning their eyes reflect this hue. This and their whistling calls helped us find four slender lorises. They don’t live in pairs or groups, which is characteristic of primates.

Alone in the trees

Like most wild animals, they prefer to be left alone, and are usually found perching in places where the canopy is continuous, thick and interspersed with many climbers that can provide shelter to the animals from the weather, hide them from predators and also serve as a sleeping spot. Strangely, we never observed any feeding. Lorises are known to primarily feed on insects. Their diets also include nutritious plant parts. 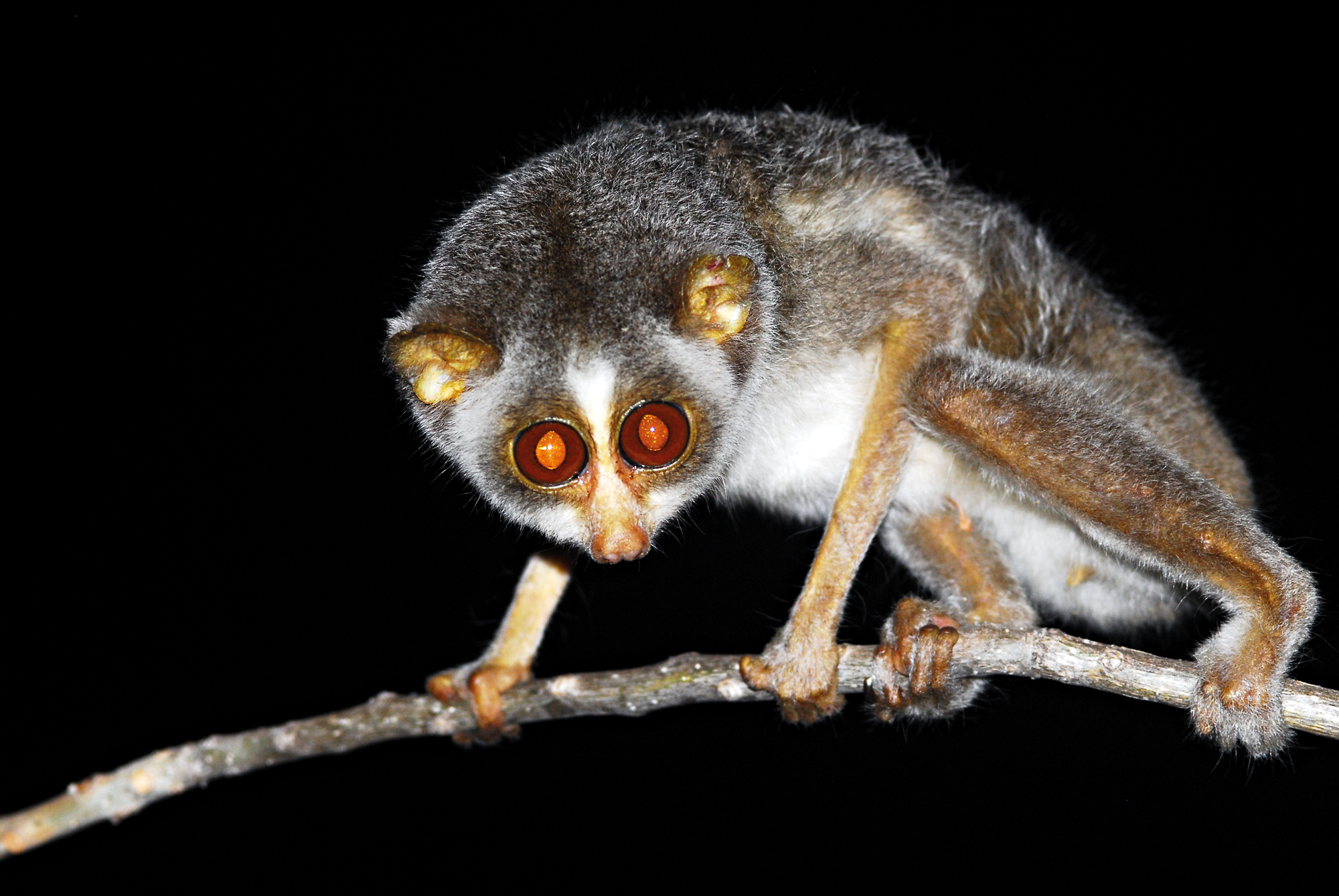 Just like most arboreal species (animals that spend most of their lives on tree), the slender loris faces a threat we are all familiar with: deforestation. They are forced to leave their safe homes on trees to venture on to the ground, where they are more vulnerable to predators.

During our time in Chinnar, we came across the carcass of a slender loris on the Munnar-Udumalpettai road. The construction of this road had fragmented that part of the forest, breaking the thick canopy. This goes to show even one road or railway track can have a huge impact beyond our imagination.

Severe habitat loss, accidents due to electrocution on open power lines, and capture for the illegal pet trade and use in traditional ‘medicine’, are all pushing this shy animal to the brink. According to the IUCN Red List, its population levels are predicted to decline in the near future, though the species has been listed as Least Concern for now. Slender lorises are rightfully listed under Schedule-I (list of animals that receive the highest protection by law) of the Wildlife Protection Act, 1972.

Kiran Thomas is a passionate conservation writer and wildlife researcher. He has also worked at the Kerala State Biodiversity Board as District Coordinator.