Jiw-jiw-jiw-jiw… “Cutia calling," exclaimed our guide reaching for his MP3 player attached to powerful Sony micro-speakers. The Cutia's (pictured above) distinctive call blasted out beside me as we searched the mossy branches of a small stand of trees at a bend along the track.

Movement… and there it was in full view - boldly barred flanks, striking eye-stripes and chestnut mantle - one of the birds on my ‘most wanted list. A bird, which for 30 years had been a tantalising field guide illustration and the subject of gripping tales from friends in the birding fraternity. Another appeared and we watched them until they moved on. Superb! Broad smiles all round. Before we could get over our excitement, “Scarlet Finch," exclaimed our guide and we turned to see two cracking males feeding on the seedy racems of a shrubby trackside. “This place is amazing" I thought, “it's as if all the elusive iconic Himalayan species are here for the seeing; where dream birds become realities in one rollercoaster birding ‘rush."

The Eaglenest Wildlife Sanctuary in the densely forested hills of Arunachal Pradesh lies between three countries - Bhutan, China, and Myanmar and is the Oriental region's hottest new birding destination. Ramana Athreya, a professional astrophysicist and independent conservationist, has done a brilliant job of establishing the wildlife sanctuary (estd. 1989) and developing birdwatching tourism in the area (since 2006). In these endeavors he has skillfully deployed his discovery of a new species - the Bugun Liocichla (named after the ethnic Bugun tribe whose ancestral lands underlay the sanctuary and who now run the three tented camps), as well as a set of iconic and sought after Himalayan species. These include East Himalayan specialties such as the Ward's Trogon, Rufous-necked Hornbill and Wedge-billed Wren-Babbler; widespread but difficult to spot species such as the aforementioned Cutia and Scarlet Finch, Green and Purple Cochoa and Gold-naped Finch and iconic Himalayan species like the Blood Pheasant, Fire-tailed Myzornis and Grandala. Birdwatching tourism in the area is taking off. During our visit, the camps were booked out by tour groups from Mumbai and Bangalore. 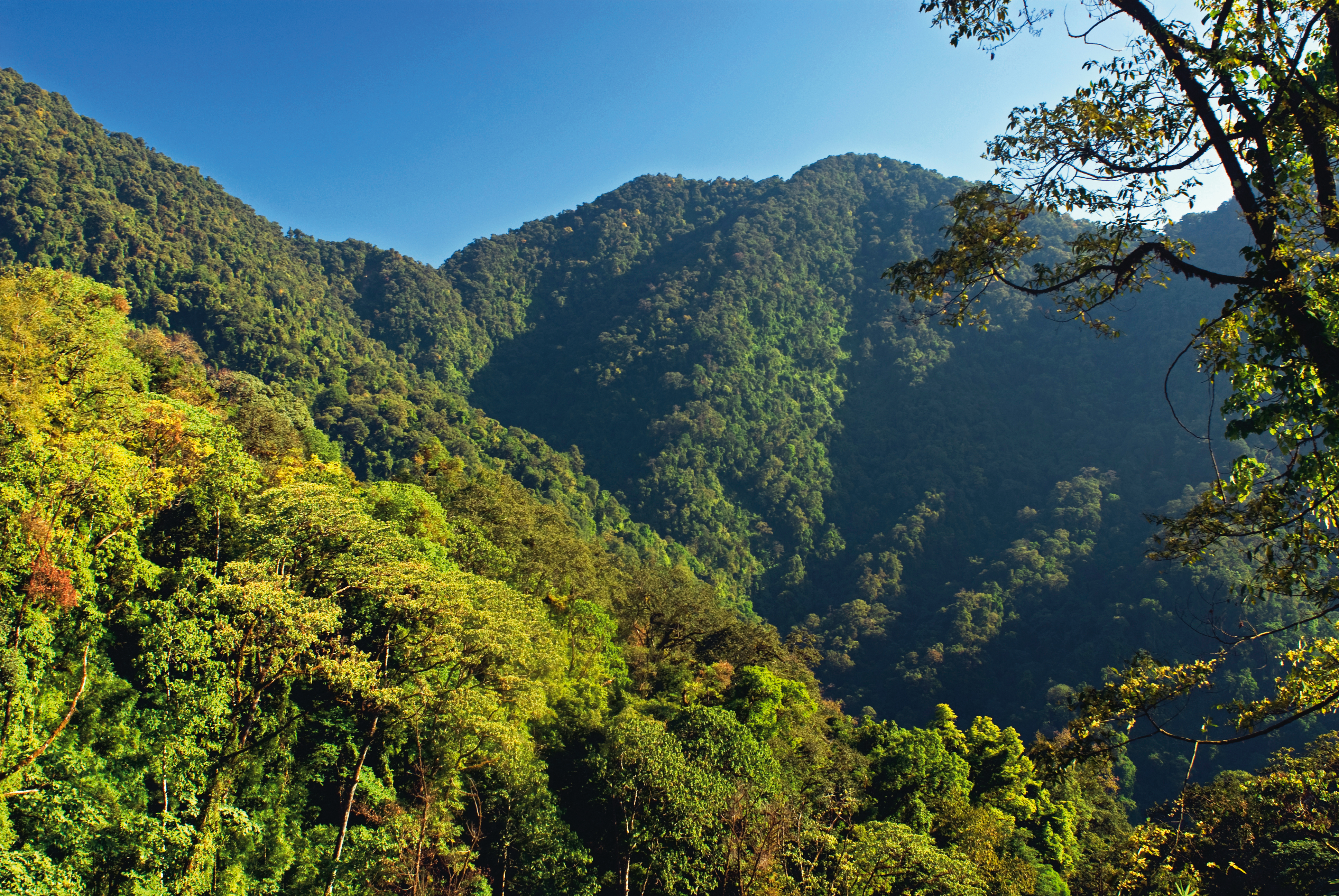 The Eaglenest Wildlife Sanctuary in the densely forested hills of Arunachal Pradesh lies between three countries – Bhutan, China and Myanmar and is the Oriental regions’ hottest new birding destination, particularly to spot rarities such as the Bugun Liocichla Liocichla bugunorum as well as iconic Himalayan species. Photo: Dhritiman Mukherjee.

Calling Out to Birds

After breakfast, we headed back down the track with our families to search for the Wards Trogon and the Wedge-billed Wren-Babbler in the lower altitude forests below the Bompu camp. We stopped at ‘Cutia corner' on the off chance that we might be able to show our wives the mornings ‘big one'. Alighting from the jeep our guide stopped, listened and announced - “Purple Cochoa calling". A surge of anticipation swept through me. Out came the MP3/Sony combo, but this time the bird moved off down the hill side and the call of a long sought-after species faded into the distance. “Hmm, we might have stood a better chance without playing the sound file," I thought. Our guide, a local tribal, had worked with Ramana on the early biodiversity surveys and had been guiding visiting birders for the last four years. His audio and visual acuity, knowledge of local avifauna, focus and persistence were outstanding. He constantly picked out distant bird calls and identified birds quicker than we could get our binoculars onto them. He was also addicted to his audio technology. As soon as a target species called or we arrived at a ‘site he adeptly selected the right sound file and within 10 seconds was playing back the species song. A contact with a sunbird or warbler prompted the playing of a Collard Owlet call to draw out a chattering agitated group of various species. Sometimes he walked ahead playing Collard Owlet. Even while we sat eating lunch the sound files would call forth. Whilst his technology was undoubtedly valuable, it also obscured his natural birding ability and the possibility for us to enjoy an older style of birding in the company of a local talent.

New birding meccas invariably create friction between old and new modes of birdwatching. As such, they prompt discussions and debates that help produce or reinforce the collective norms that help govern our hobby. For me, it was interesting to contrast this ‘sound-tech mode of birding with the back-packing birding of my 1980s youth. Part of me wanted to recapture this by walking the track, observing the birds I encountered, following-up calls by going-in, scrambling up gullies, scanning from viewpoints and staking out fruiting and flowering trees. Another part of me was more than happy to embrace our guides approach. I desperately wanted to see the birds, had limited time and was birding with my family. The ethnographer in me resolved the tension: I was intrigued to experience how the revolution in the coverage, availability and play-back-ability of Oriental bird songs manifested in the practices of Oriental birding. Leaving Eaglenest we gave a lift to a young Indian ornithologist studying hornbills. She immediately raised concerns about playback practices, commenting on how every guide uses it and how the Bugun Liocichla, which two to three years ago was frequently observed around Lama camp, was now virtually impossible to see on account of birds no longer responding and/or having moved away. When I asked our guide when the best time to visit Eaglenest was, his response was “In February, before the tapes have pushed the birds away." These two comments primarily prompted this article and discussion. 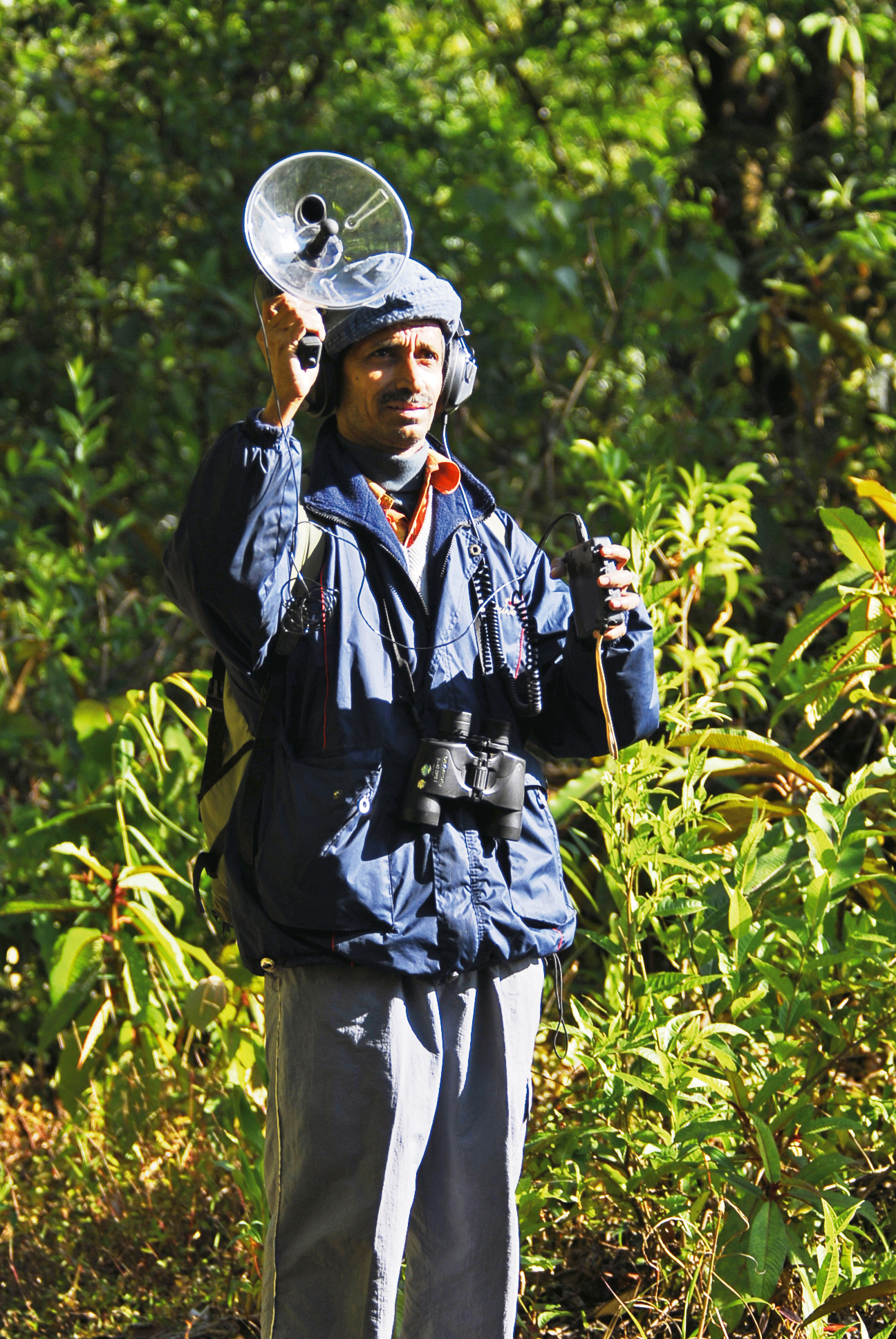 A guide holds up a parabolic sound collector in the Eaglenest Wildlife Sanctuary.  The steep forested topography which is currently only accessible along an old army jeep track means that everyone walks the same ‘transect’ and plays to the same (resident) birds. Digital photographers draw birds out to closer range and better light and guides vie with each other to show clients the 'specialty species'. The author questions this overdone birding experience, which may be causing the sanctuary’s most sought after species to either vacate territories along the track or even cease to respond to playback. Photo: Dhritiman Mukherjee.

A number of factors have conspired to make playback an issue in Eaglenest. Foremost are the advances in the quality, miniaturisation and affordability of audio equipment. The calls of several hundred species of bird were recorded during the biodiversity surveys that coincided with the sanctuary's establishment. These are stored and quickly retrieved and played on lightweight equipment costing less than 100. Second, is the presence in the sanctuary of a number of East Himalayan specialties which are difficult to see without playback: notable are three species of Wren Babbler (Wedge-billed, Long-billed and Rufous-throated) and the Slender-billed Scimitar-babbler. Third, is the steep forested topography of the site which is currently only accessible along an old army jeep track. This means that everyone walks the same ‘transect and plays to the same (resident) birds. Fourth is the rise of digital photography and the attractiveness of drawing birds out to where they are in range and in better light. Fifth is the pressure, perceived or otherwise, that guides feel to show their clients the specialty species. This is magnified by the novelty and high cost of visiting Eaglenest.

It's All in the Experience

It appears that playback is causing the sanctuary's most sought after species to either vacate territories along the track or just cease to respond. From a conservation perspective, this probably doesn't matter: the forests of Arunachal Pradesh are still extensive. From a commercial birding tourism perspective it may not matter too much either. The species concerned are highly sought after and the prospect of seeing them combined with the overall quality of the birding may be sufficient to sustain demand. For me, the issue is about how birders want to engage with birds. I am attentive to the fact that birding has moved on from the 1980s when my particular birding ethos was forged. The 1990s witnessed the emergence of wealthy ‘roller birding retirees intent on amassing large life lists and willing to pay good money to those able to deliver ticks: U.S. and U.K. bird tour leaders introduced tape-playback as a means to assure their client's satisfaction. Today, a number of trends seem set to further transform birding practices in India. The most notable is the rise of digital photography, but also significant will be the interplay between a new generation of field guides, Internet clubs and bird forums and a growing middle class looking to (re-)discover their nation and heritage. In times of transformation, I suggest it is important to reflect on the practices of birdwatching and I offer three observations for discussion and critique. 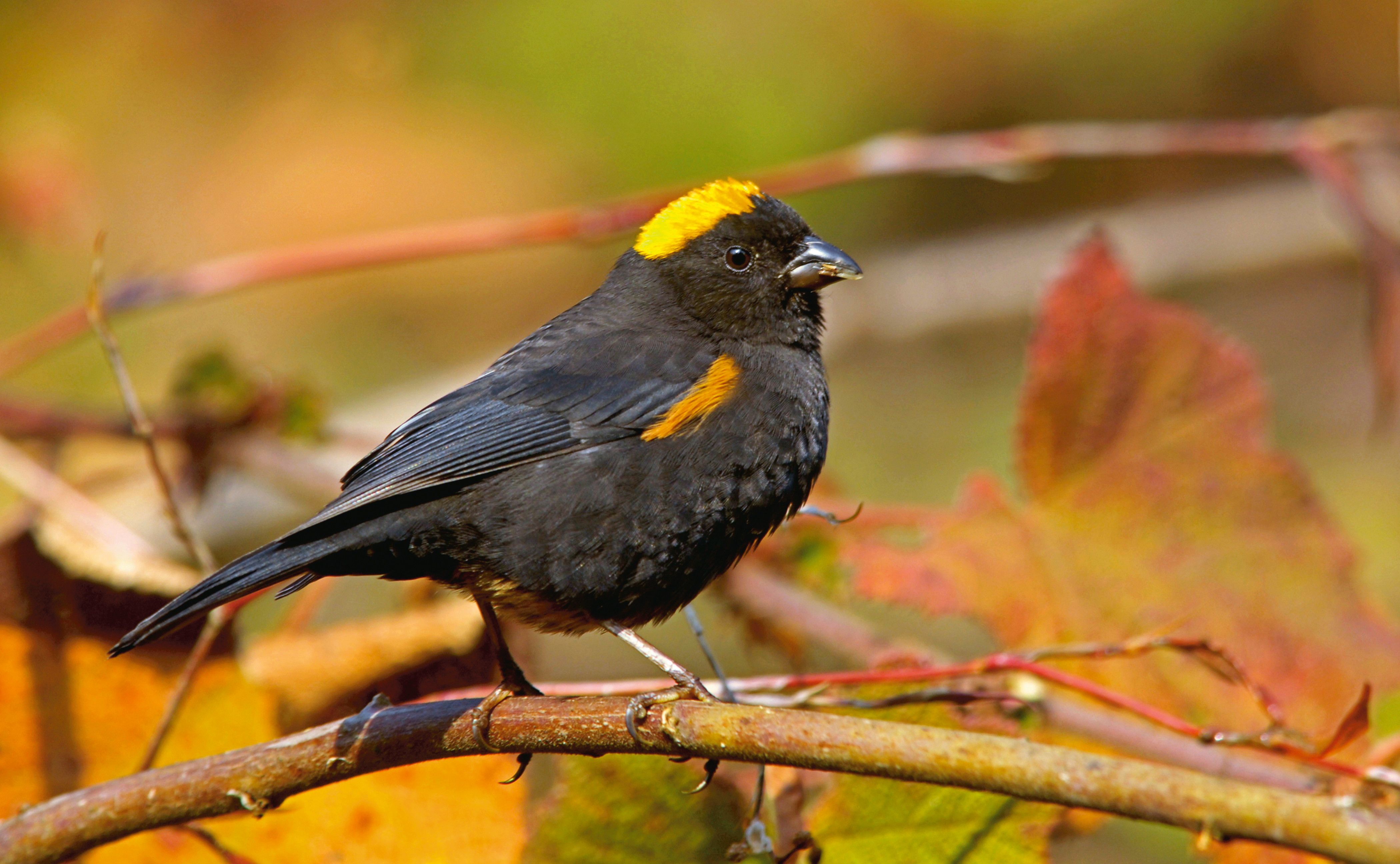 With forests that range from sub-tropical to temperate, Eaglenest offers prime habitat for myriad species of birds such as the Gold-naped Finch Pyrrhoplectes epauletta seen here. November to May is considered the best time for birdwatching with April-May making up for the lack of winter species with more birdsong. Photo: Dhritiman Mukherjee.

The first concerns the way of engaging with birds. In the playback-less 1980s this, for me at least, involved ‘tuning in with the place where I was birding. It represented a form of ‘immersion where the goal was to see birds on their terms: to search and predict their presence, observe from a distance or attempt to become invisible and part of their place. In contrast, the sound-tech birding mode involves drawing birds into the human domain. If they come, they come either agitated - flitting about - or invisible, calling but stationary and cryptic. Sound-tech birding brings into focus the distinction between birding as a more meditative pursuit vs. birding as an acquisitional pursuit. Of course, birding has always been a bit of both. My point is that new audio technology plays to the acquisitional traits within us (life lists, digital image collections and so forth) and it would be a shame if this overrides the more meditative, dare I say spiritual potential of birding.

The second observation relates to the notion of a wildlife sanctuary within conservation. Eaglenest is one of 441 wildlife sanctuaries in India. From an external perspective, India seems to have extended the concept of a wildlife sanctuary beyond its late 19th century U.S. origins. Whereas the idea then was to create refuges for endangered species and deliver humanity's moral responsibility to ensure the survival of threatened life forms, in India this seems to be supplemented with the idea of giving sanctuary to wildlife, i.e. the creation of places where non-human life can live without intrusive human interference. From this perspective, we might ask whether it is appropriate to use playback in areas designated in India as wildlife sanctuaries.

My concluding observation is simply this; should we allow technology to govern how we engage with birds or should we discuss and debate the agency of new technologies and collectively govern their use?

GENERAL TAPE-PLAYBACK NOT A MAJOR ISSUE…

Tape-playback should be banned in all protected places in India (sanctuaries and NPs) unless it is for approved scientific purposes. It should also not be permitted for species of conservation concern, especially in the breeding season. However, as far as general playback is concerned - the jury is still out and on the scale that it occurs in India, in my opinion, it is not as major an issue. Chasing birds with cameras, using flash for photography and tape-playback pose relatively minor problems when compared to the impact of hunting/trapping, rampant use of pesticides and the destruction of habitats. However, a more balanced approach is vital for general playback. Building interest in birding and making it a commercially-sound business has more important long-term conservation value and must be weighed before considering the infrequent disturbance to commoner birds.

Dr. Paul Jepson is the Course Director, MSc Nature, Society and Environmental Policy, School of Geography and the Environment at the University of Oxford.