Birding In The Middle Andamans

A forest rich in endemics is every birder’s dream. Island endemism, a concept put forth by Robert H. MacArthur and E.O. Wilson, suggests that the biogeographical barriers that prevented the migration of animals, and thus restricted gene flow, enabled mainland species to mutate into a new species on islands. The birds of the Andaman and Nicobar Islands have much in common with those found in peninsular and Northeast India, but many species on the islands have evolved into endemics. Their genetic structure no longer matches those of their counterparts on the mainland, although they look almost exactly alike.

Wild species in the Andamans – as in most islands – evolved differently from their mainland counterparts, creating a diversity of species found nowhere else. This high level of endemism plus the fact that islands are especially at risk to rising sea levels, render them vulnerable to extinction. This is why they need stricter protection.

Memories of lessons on evolution and island biogeography filled my mind as I imagined birds appearing out of thin air as I boarded my flight to Port Blair. The odd hours of the flight were nothing compared to the eight-hour-long ferry ride from the city to Mayabunder. It was a liberating feeling, leaving the infamous Cellular Jail, Ross Island, Chidiya Tapu beach and other popular tourist attractions and their commercial chaos behind.

ARRIVING AT THE KARENS

We were rejuvenated by the first sight of a lifer, the Glossy Swiftlets dashing between the pillars of the jetty, each on a frantic circuit of its own, shimmering and shining as they banked into the sun, flashing their brilliant blues. When we were done admiring these aerial artists, we made our way to the little picturesque village of the Karens, the Burmese settlers in the Andamans. Scenic stretches of tall, dense rainforest with promises of more endemics and the calm, quiet countryside led us to our quaint homestay at John’s: https://bit.ly/3mZ9E5K, 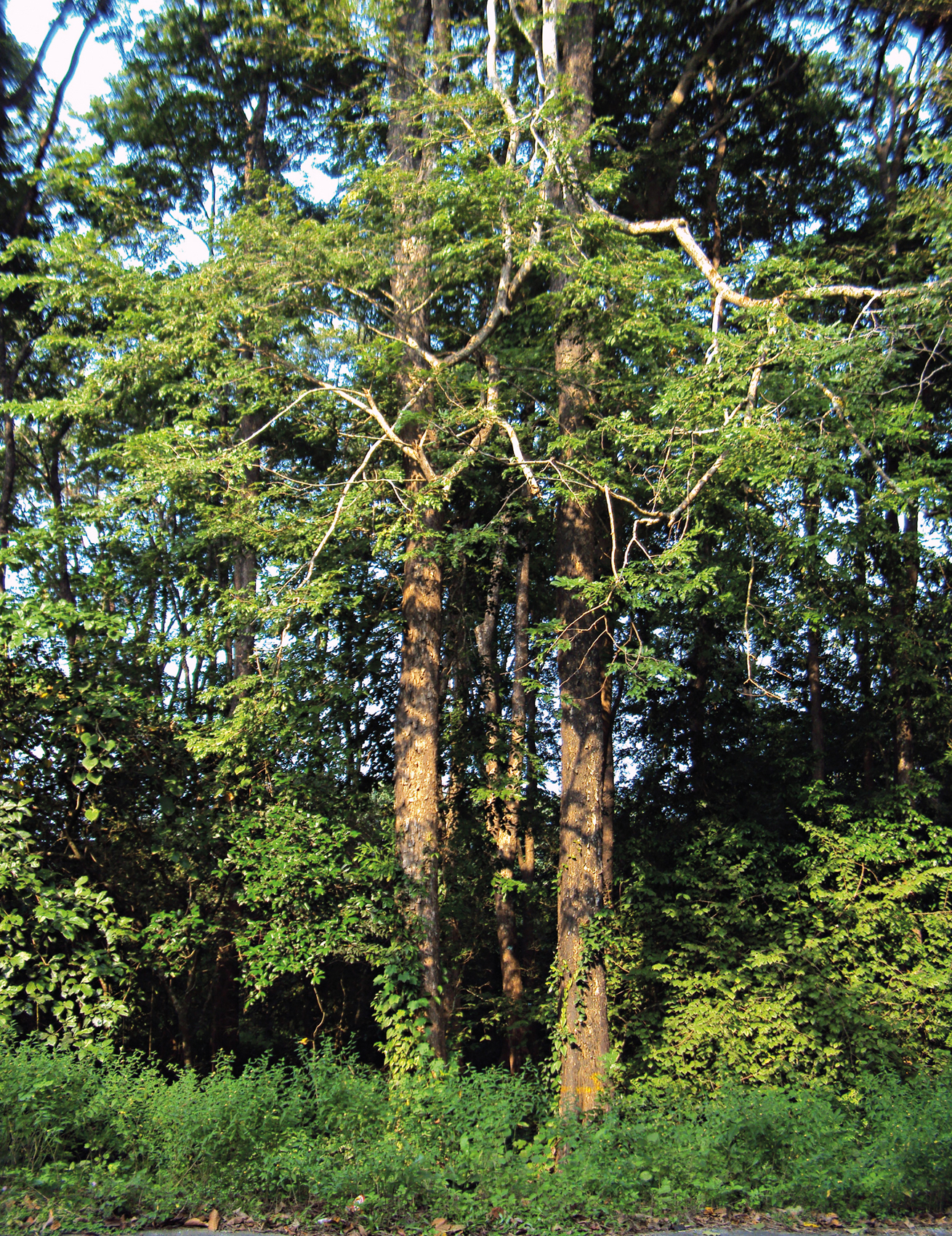 Native Andaman Padauk trees, locally called narra, are sturdy redwoods that burst into golden flowers each summer. They hold cultural significance for their medicinal properties, but they are also valued by lumber companies because they tower to heights of over 35 m. These trees are vital bulwarks for the Andaman coast, which is increasingly being buffeted by more frequent and severe climatic extremes.

Delicious local dishes, prepared by John’s lovely wife Doris, were consumed while prospective birding sites to visit over the next five days were discussed. The following days could only be summed up as some of the most productive days of birding I’ve ever experienced. We targeted stretches of forests found on the side of the road towards Diglipur (North Andaman). John had organised a pair of bikes for the four of us without which the whole venture would have been far more complicated. The combination of diving in the deep, clear, blue waters and birding in lush, tall-canopied, green forests was more enriching than we could ever have hoped.

We decided to head into the forest the next morning at the crack of dawn. I am not sure if it was the freezing ride or my excitement that had me trembling uncontrollably as we walked into the jungle. We entered slowly, leaving our bikes behind. An unseen but very audible dawn chorus accompanied us every step of the way. Every other bird we saw was a lifer, a new bird with a familiar twist.

FROM THE UNDERGROWTH TO THE CANOPY

A yellow version of the commonly seen White-browed Bulbul, the Andaman Bulbul frolicked in the undergrowth, shyly announcing its presence with a melodious note. Their purple eye rings complimented the beautiful earthy yellow of their body and wings. Andaman Bulbuls are among the more common birds in this area, their behaviour resembling that of the White-browed Bulbul, which, back home in Pondicherry, is a shy, secretive species. The bird remained amidst the thicket for most of the time, perching on the deadly spikes of rattan cane. Higher up, the Andaman Treepie performed acrobatic stunts that for a bird of its stature were pretty impressive, as it hung upside down from thin vines. Even the treepie’s raucous calls were welcoming that morning. The bird seemingly held the sun in its eyes… even in the darkest nooks of the forest, its eyes shone a bright-yellow. The Andaman Treepie differs in behaviour and appearance from all its counterparts on the mainland - the Rufous Treepie, White-bellied Treepie and Grey Treepie. 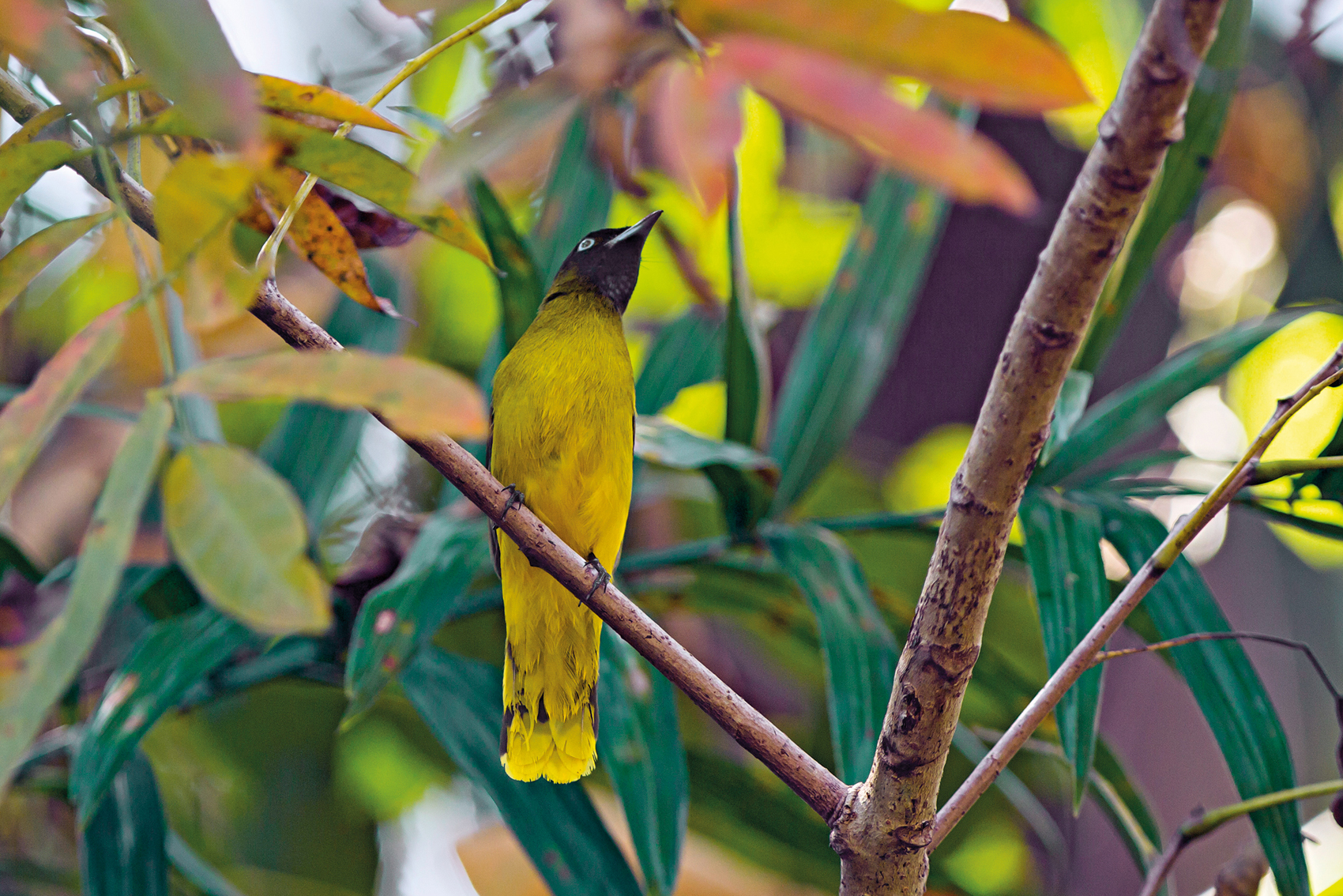 The Andaman Bulbul Brachypodius fuscoflavescens – a rotund, pale green version with few markings aside from the olive tips on its tail and wing feathers – is a common sight on the islands.

Unable to cover the entire length of the trail in a day, we would pick up from where we left each day. During our downtime (post diving sessions, after dark), the trees and open patches around John’s little cottage kept us occupied. Chestnut-headed Bee-eaters were ever present on wooden poles in the fields, and an Andaman Scops Owl visited the patch of forest by John’s house every night. 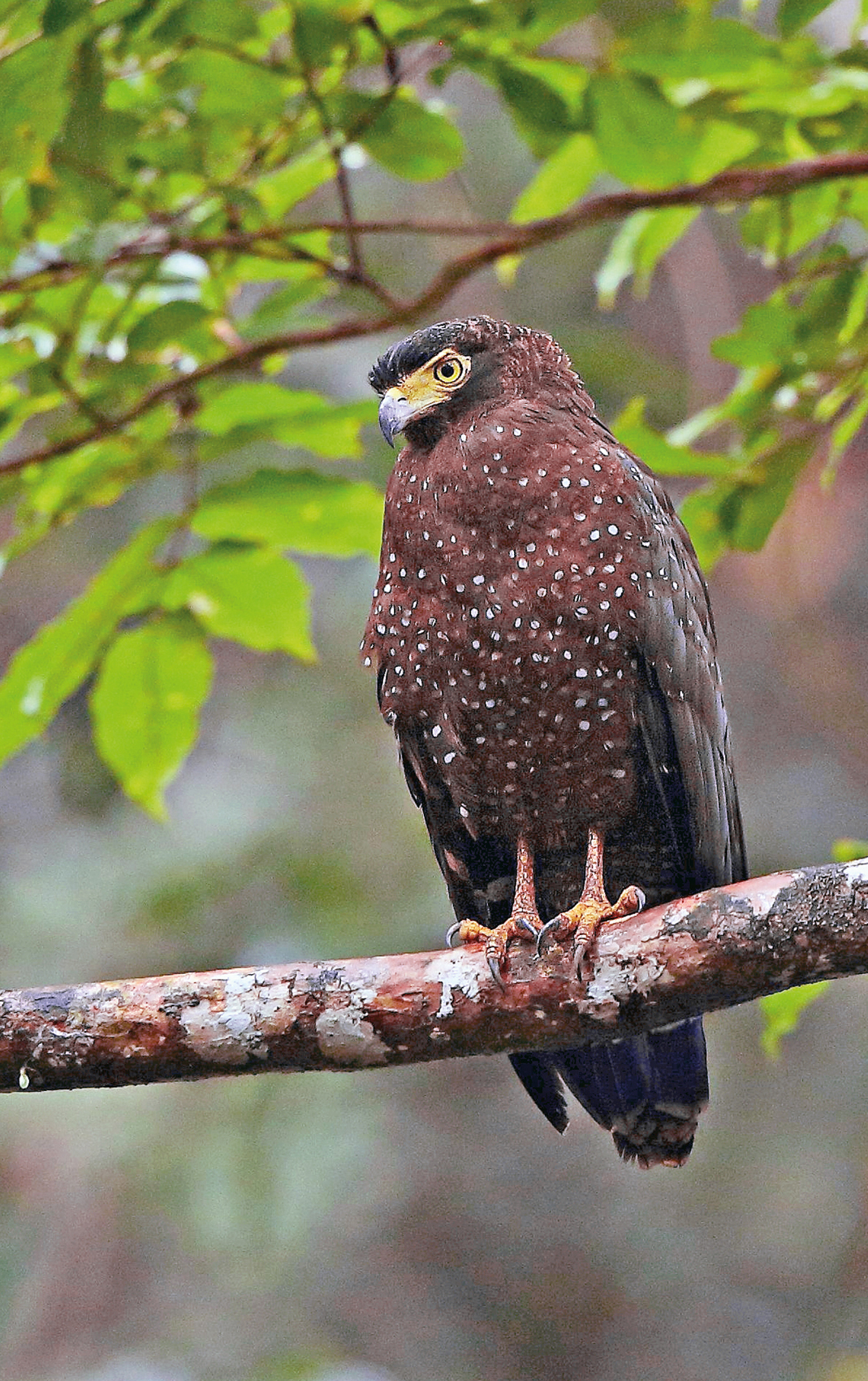 A relatively small raptor, the Andaman Serpent Eagle Spilornis elgini sports a bright yellow eye patch and its chirpy whistles can be heard, even when the bird remains unseen. Juveniles can be told apart from adults by their pale creamy heads.

In the forest, the nature of activity varied from the undergrowth, to the lower canopy and up to the upper branches of fruiting trees. Some days our eyes strained to catch a glimpse of an Andaman Shama, which we tracked by following its sweet refrain, flitting from branch to branch in the undergrowth. Other days, we stared into the sky, cranking our necks and struggling to keep our balance as we attempted to follow the movements of foraging Andaman Green Pigeons. The endemic shama here can be told apart from the White-rumped Shamas of the mainland by a band of white on the chest separating the black throat from an orange belly. The Green Pigeons on the other hand closely resemble the Grey-Fronted Green Pigeons of the Western Ghats. 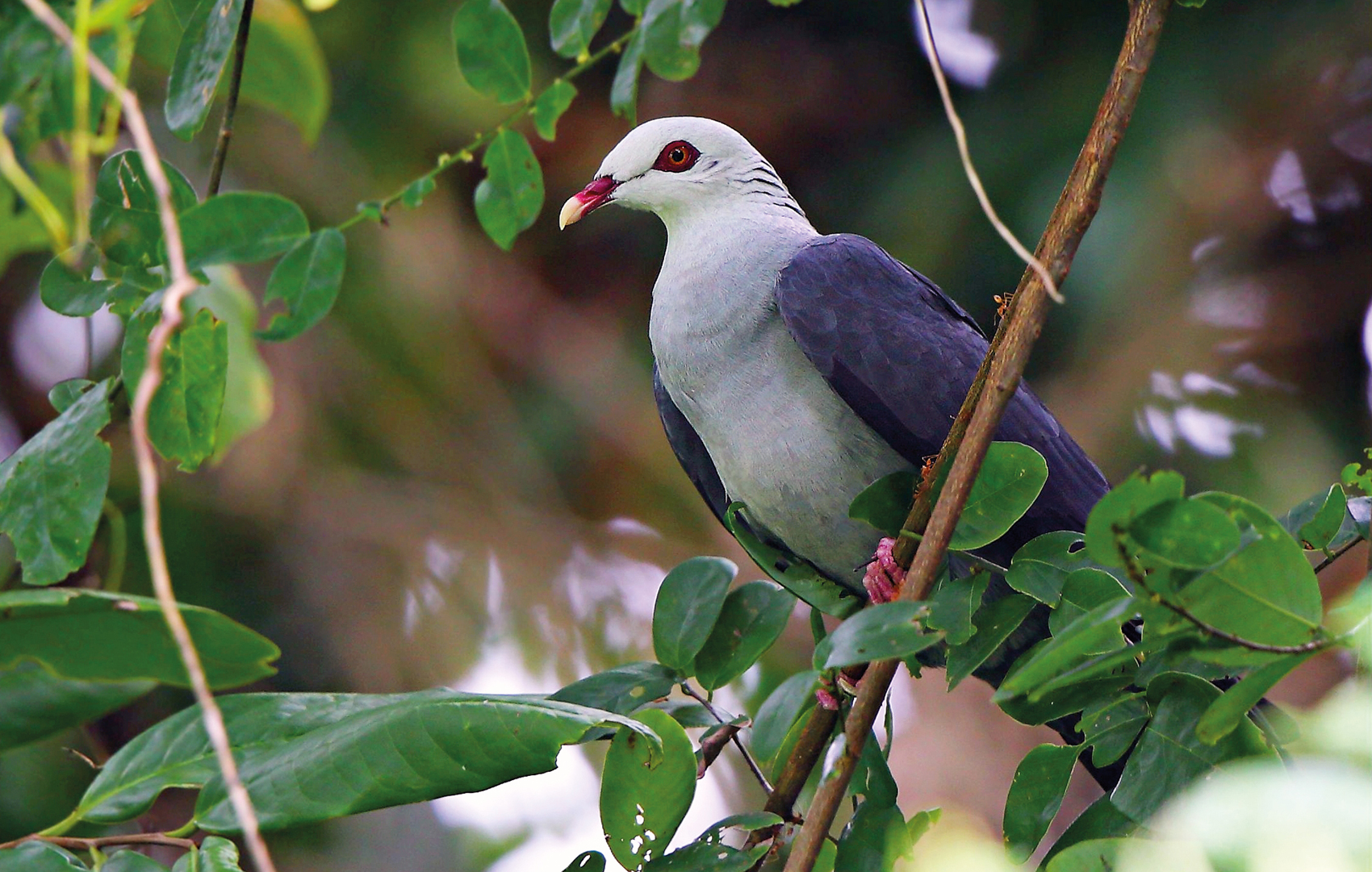 The Andaman Wood Pigeon Columba palumboides gorges on figs, berries and other small fruit. Though it appears similar to the Green Imperial Pigeon of the subcontinent, the red skin around the eyes and grey vents of the Andaman bird tell it apart from its mainland cousin.

Our list of endemics seemed endless. The blue skies sometimes echoed with the cries of Andaman Serpent Eagles, a virtual flock of which we spotted one morning. Their calls sent other avians fleeing for cover. One bird that never panicked, choosing to remain put in the dense foliage was the Andaman Cuckoo Dove. These good looking avians lack the shiny green and blue hues on the neck, like those of the Barred Cuckoo Dove… instead they sport a beautiful dark-cinnamon colouration. It was only under the peaking harsh afternoon sun that the birds took a small break for an hour or so, but the numbered daylight hours meant they would soon be back to their feeding frenzy. The silence was often broken with the thunderous hammering by the Andaman Woodpecker. The striking contrast of red and black and its powerful beak gave it an authoritative appearance. Despite all efforts, we were unable to photograph the endemic Violet Cuckoo on account of its elusive nature, but we did spot him through our binoculars. 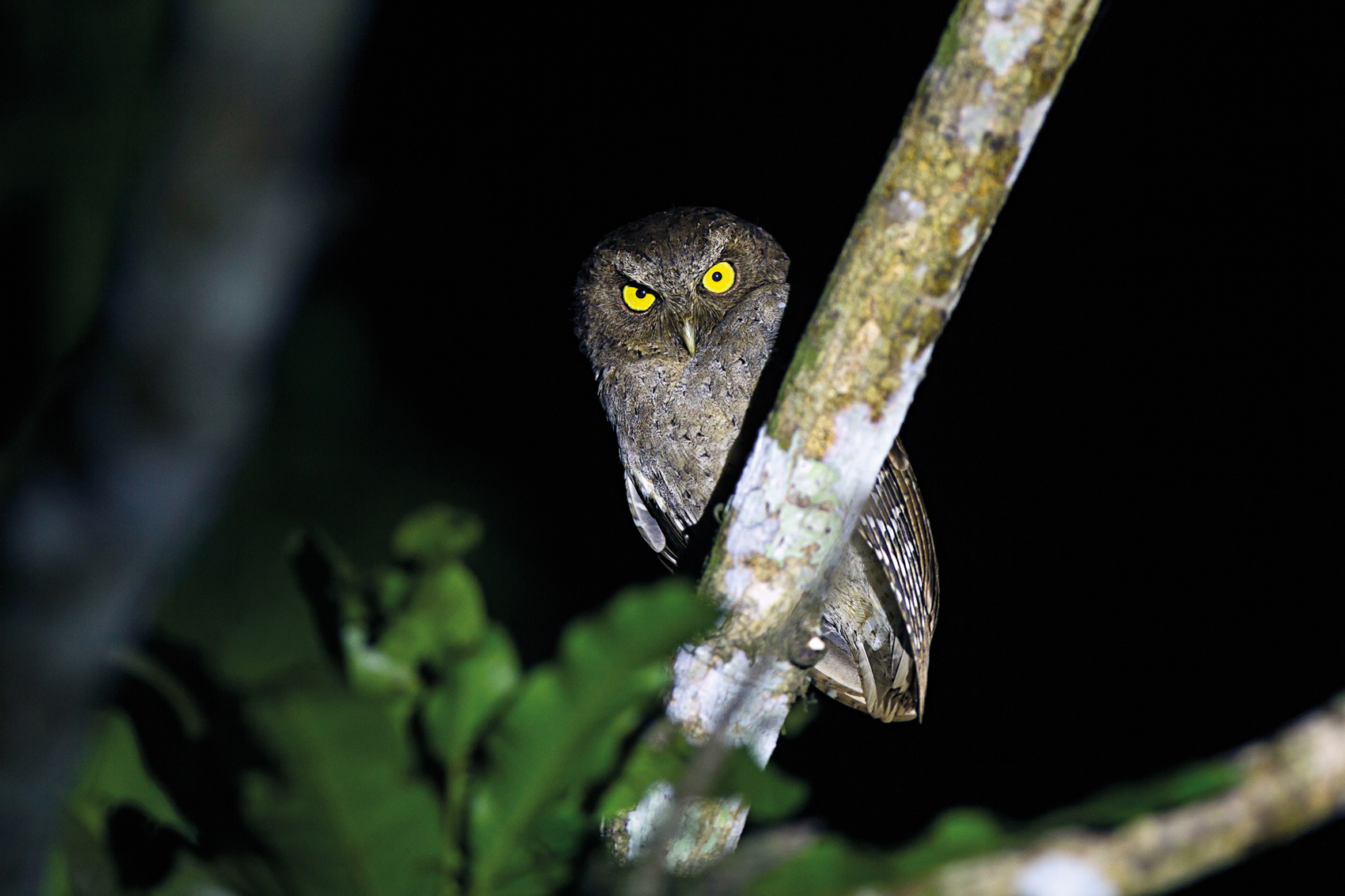 The Andaman Scops Owl Otus balli is entirely nocturnal, and little is known of its behaviour. It occurs in two morphs, brown and rufous, and can be distinguished by  its yellow eyes and bill, and lack of streaks  on its underparts.

One striking incident that remains fresh in my memory is the sighting of a pair of Racket-tailed Drongos. Common in mainland India, here they were often observed flitting about high in the rainforest canopy. The trickster that it is, it often fools birds with well-mimicked calls of predators. A pair of these drongos settled surprisingly close to me. At first, I didn’t notice them, and tried at that moment, to imitate an Asian Koel, a bird we hadn’t seen, nor heard so far. To my surprise, one of the drongos promptly imitated my version of the call. Curiously, I repeated the whistle every few seconds and the drongo responded each time, but struggled with the notes, managing to copying my counterfeit calls just a couple of times. However, the juvenile (which is what I presumed it must have been, judging from its rudimentary skills), just never gave up. Several attempts later, the drongo managed to master the call. A short, satisfied flick of its fancy tail, and off it went, another feather in his cap, another trick in its bag. 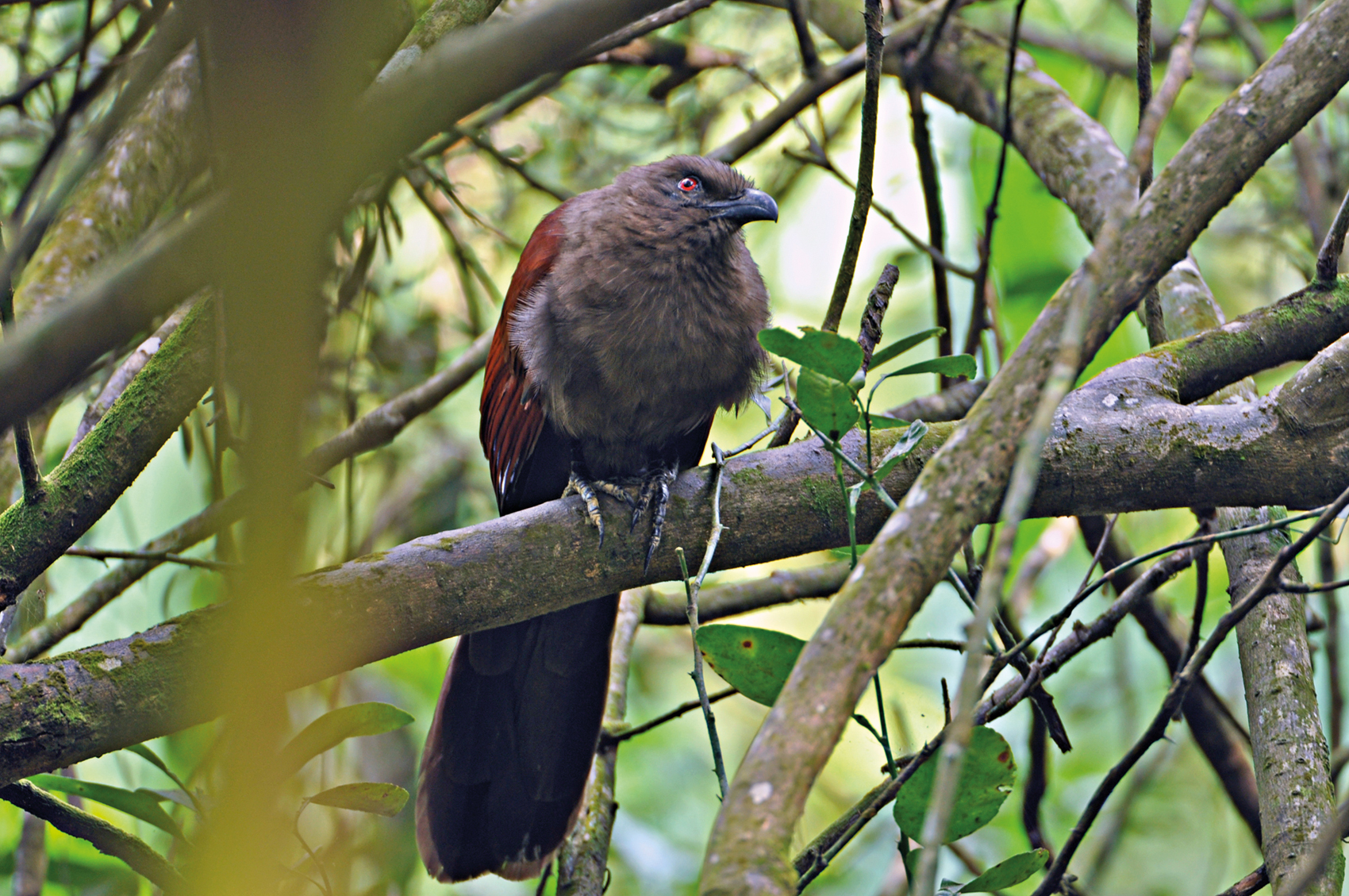 The Andaman Coucal or Brown Coucal Centropus andamanensis is a large, ground-dwelling non-parasitic cuckoo that keeps to bushes and low vegetation, feeding on small invertebrates, mammals and birds.

For me, the islands possess a certain magic. One that captures and modifies every form of life, creating unique and magnificent life forms. Its pull draws me back to the islands year after year, guised as a desire to document and explore more, while subconsciously I suspect it’s a more primal need to be one with wild nature. 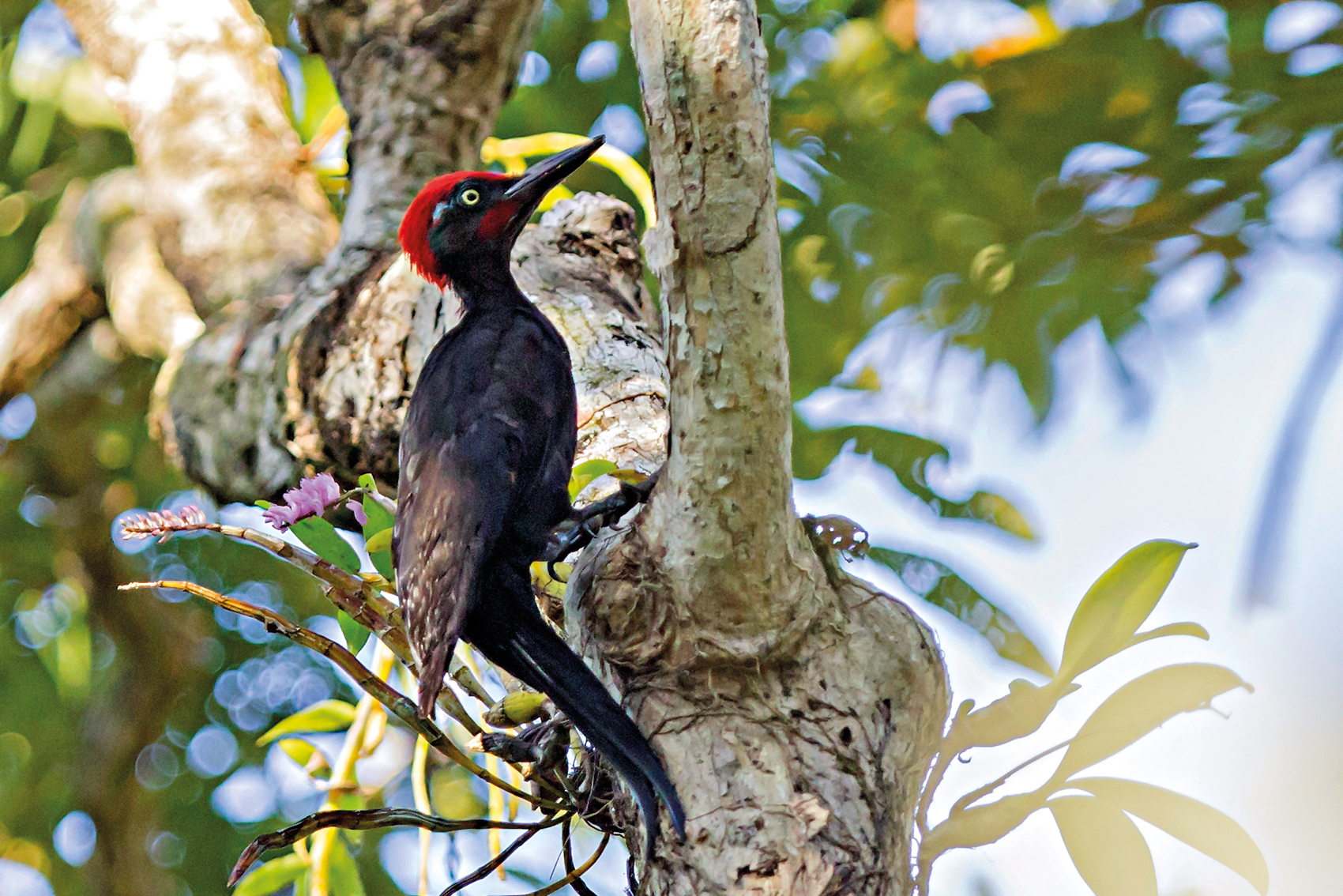 Unmistakable on account of its conspicuous red crest, the Andaman Woodpecker Dryocopus hodgei prefers the higher canopy of evergreen forests and mangroves across the islands. As with the majority of island species, the bird is threatened at the hands of both habitat loss and climate change.

The Andaman and Nicobar islands are a biodiverse paradise, recording a whopping 9,100 wild species, of which 1,032 are endemic, according to Mongabay. A total of 288 avian species are noted here, with 25 endemics (source: Avibase). Geographic isolation has allowed unique species to flourish in the 572 forested islands of the archipelago in a variety of habitats, from terrestrial forests and rich mangroves to coral reefs and sea floors. Whales, dolphins, dugongs, are among some of the critical species found here, while sharks, sea cucumbers and crocodiles, also found here, are subjected to over-exploitation. The rampant poaching, thanks to the island’s proximity to neighbouring countries like Indonesia, Thailand and Myanmar, coupled with the looming threat of climate change and its onslaught of natural disasters, makes the archipelago a highly vulnerable region. A study conducted by the Indian Space Research Organisation (ISRO) predicts that 2,305 sq. km. of the forests here (equivalent to the size of Mauritius) could disappear by 2025. K. Venkataraman, former Director at the Zoological Survey of India (ZSI), said that thorough studies need to be conducted on the islands to estimate and mitigate the extent of potential biodiversity loss – analysis of invasive species and population trends, strengthening protection and strategy of disaster management efforts.