Breed Or Bust? Can Captive Breeding Save The Great Indian Bustard?

I first encountered bustards as a child, when I was out in the Rann of Kutchh. My father was a great birder, and going on safari in the desert was always an opportunity to marvel at the beautiful migratory species that would inhabit this land during a small window of time in winter. We spotted flamingos, pelicans, and once even the elusive Black Stork. The most impressive to me, however, were the bustards. I saw a pair of Houbara Bustards flying in unison in the haphazard way that they do. It was then that my relationship with these birds began.
Over the years I have followed the story of the Great Indian Bustard, and I have with a heavy heart seen the demise of its once large range. The numbers in the early part of the century were plummeting on account of excessive hunting, and then came agricultural encroachment from those who probably didn't know better. Today, if one reads the official estimates there are approximately 200 individuals remaining in the wild, in patchy and fragmented areas. What can we do to help raise their numbers and protect the species? The Great Indian Bustard (GIB) remains one of the most dynamic species living on the Indian Subcontinent. Raptor-like in appearance, it is the largest terrestrial Eurasian bird. Though GIB numbers tragically continue to dwindle, we still have hope. Without doubt, the first step to saving the bird is to assure it space, protection and the availability of food. 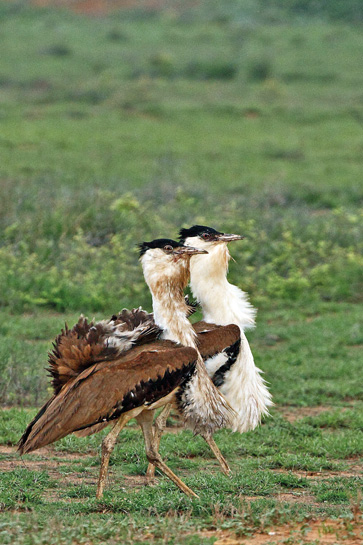 Easily identified by its characteristic long neck and legs, the female Great Indian Bustard is smaller than the male and lacks the gular pouch, which males inflate when displaying or calling. Photo: Ashok Chaudhary.

Towards this end, technologies including the use of remote and satellite sensing are being put into play to track the birds. Despite all the difficulties and the distinct possibility of failure, we probably have no choice but to look much more seriously at the idea of captive breeding. This entails the capture of fit and genetically-viable individuals from the wild, together with a protocol and resources to release offspring back into the wild. Such programmes have been successful with different species, particularly birds, and could with luck and determination, help save the GIB. 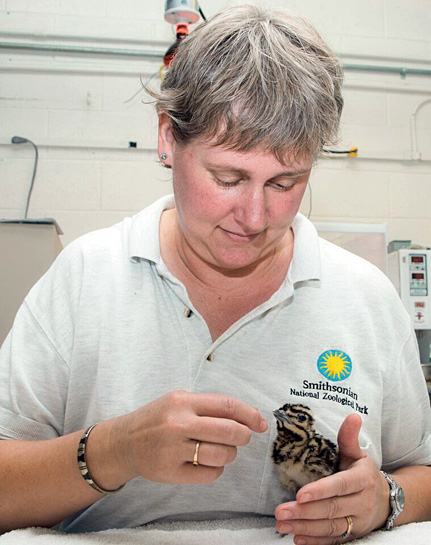 In Washington D.C., U.S.A., there is a very special programme aimed at studying the behaviour, habits, and habitat requirements of the Kori Bustard. It also serves as an educational programme to raise awareness and support for the species, which is similar to our Great Indian Bustard in many ways. To begin with, it belongs to the same genus and is native to (East African) grasslands that have similarities to the native range and ecological requirements of the GIB in India. The birds also share somewhat similar biology and traits - including the famous lekking behaviour of male birds that congregate and display during courtship by puffing up cavities in their throats to present an intimidating visage to competing males. Undoubtedly, this greatly impresses females for whom the display is unambiguously set up. The programme at the Smithsonian National Zoological Park began in 1995 and produced its first fertile egg in 1997. To date, there have been many hatchlings, and the National Zoo has set a standard of breeding the bustards - illustrating how they can thrive in a captive environment.

This is not to say there will be no challenges to captive breeding and reintroduction in the wild. Bustards require privacy and security, and cannot be housed with other species. They are prone to a variety of diseases and contract myopathy - stress caused by muscle exertion. Bustard management is far from easy, and a well-researched methodology is paramount before we can even begin to think about establishing such a programme. All this must be firmly in place before a single bird is taken out of the wild to be bred. A miscalculation could be harmful to the already tiny surviving population of GIBs. Using a metric provided by an international body, such as the IUCN (International Union for Conservation of Nature) is therefore imperative for a sensitive programme such as this.

I spoke with Sara Hallager, Curator of Birds and Animal Programmes at the National Zoo in the Smithsonian, in Washington D.C. Sara has run the Kori Bustard programme and is the International Studbook keeper as well as the Coordinator for the Association of Zoos and Aquariums Species Survival Plan for Kori Bustards in the United States. She offered a perspective on what led to the success of the programme and the potential implications for the GIBs captive breeding programme in India. In Saras words: “The continued management, propagation and multifaceted research of Kori Bustards at the zoo has been made possible by the work and dedication of keepers, curators, veterinarians, nutritionists and scientists with the support of senior management and offices of education, communications, development, and exhibits. Since the first fertile egg in 1997, we have consistently learned and applied our knowledge to better our care of this species."

Reintroduction into the wild would, of course, be another bridge to cross.

A framework with a dedicated and educated team of individuals, national and/or international, is critical to create a viable GIB captive breeding programme. One of Indias leading experts, Dr. Pramod Patil, says, “Captive breeding of the GIB can be an insurance against complete extinction, but should not be and cannot replace in situ conservation efforts nor should it become the centre of focus of any of the concerned authorities in India. It would be certainly great if their number goes up by ex-situ efforts, but at the same time habitat and community level issues need to be worked upon." In other words, captive breeding alone cannot be our answer. A combined effort where we are managing the populations at the local level, supplemented with an ex-situ programme, such as captive breeding, may offer a solution. We must grasp at every straw, even as we wake up to the vital importance of resurrecting, protecting and appreciating the ecological imperative of returning the grasslands of India to a measure of its former, resplendent glory. 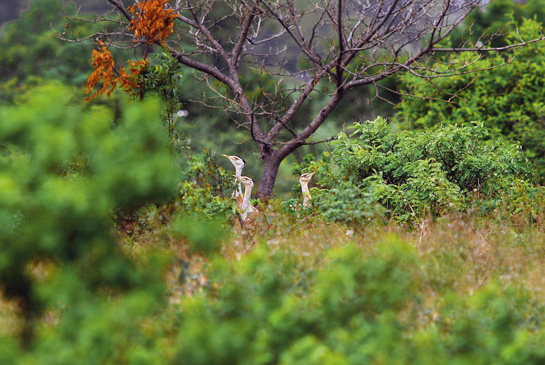 The drastic decline of the grassland and scrub habitat of this highly endangered bird has left it with limited options in India. Nanaj is one of the few last refuges of the Great Indian Bustard, but even here it is in grave danger. Photo: Baiju Patil.