Brown Bears of the Middle Himalaya

Text and Photographs by Gaurav Sharma

The wooden log bridge had been swept away in the night’s flash flood. Carrying provisions for the next leg of my trek, the support team stood unprepared for a treacherous river crossing over thundering torrents. Turning back from this point and attempting another expedition later seemed inevitable, given the impassable trail and unrelenting bad weather. My search for the rare Himalayan brown bear Ursus arctos isabellinus in the upper Tirthan valley had been obscured by freak weather in mid-June. Well, there is always another year.

It was mid-May in 2011, the following year, and I was already over 25 km. from the nearest trailhead I had left two days ago. Leaving snowy winter behind, the magnificent Homkhani Reserve Forest in Sainj valley was rising to its spring glory. I was eager to touch and feel the famed bark of bhojpatra Betula utilis trees, a grove of which my guide Durga from the Himachal Pradesh Forest Department was leading me to. Suddenly, the trail in front of us vanished. Making sense of what lay in front of us, a large glacier originating way north seemed to have catastrophically ruptured sometime recently, washing away a wide area downstream. Unlike landslides, which are not uncommon in this seismically active region, the scale of devastation from this event was enormous, to say the least. Huge trees and boulders lay strewn, swept by the sudden deluge unleashed on them. A rare and sudden catastrophic event like this may not be dismissed as part of some natural process. A warming micro-climate, in addition to the large-scale ecological devastation and natural river course alteration by hydropower projects lower in the valley, was already worsening the habitat fragmentation of the Himalayan brown bear and other native species. 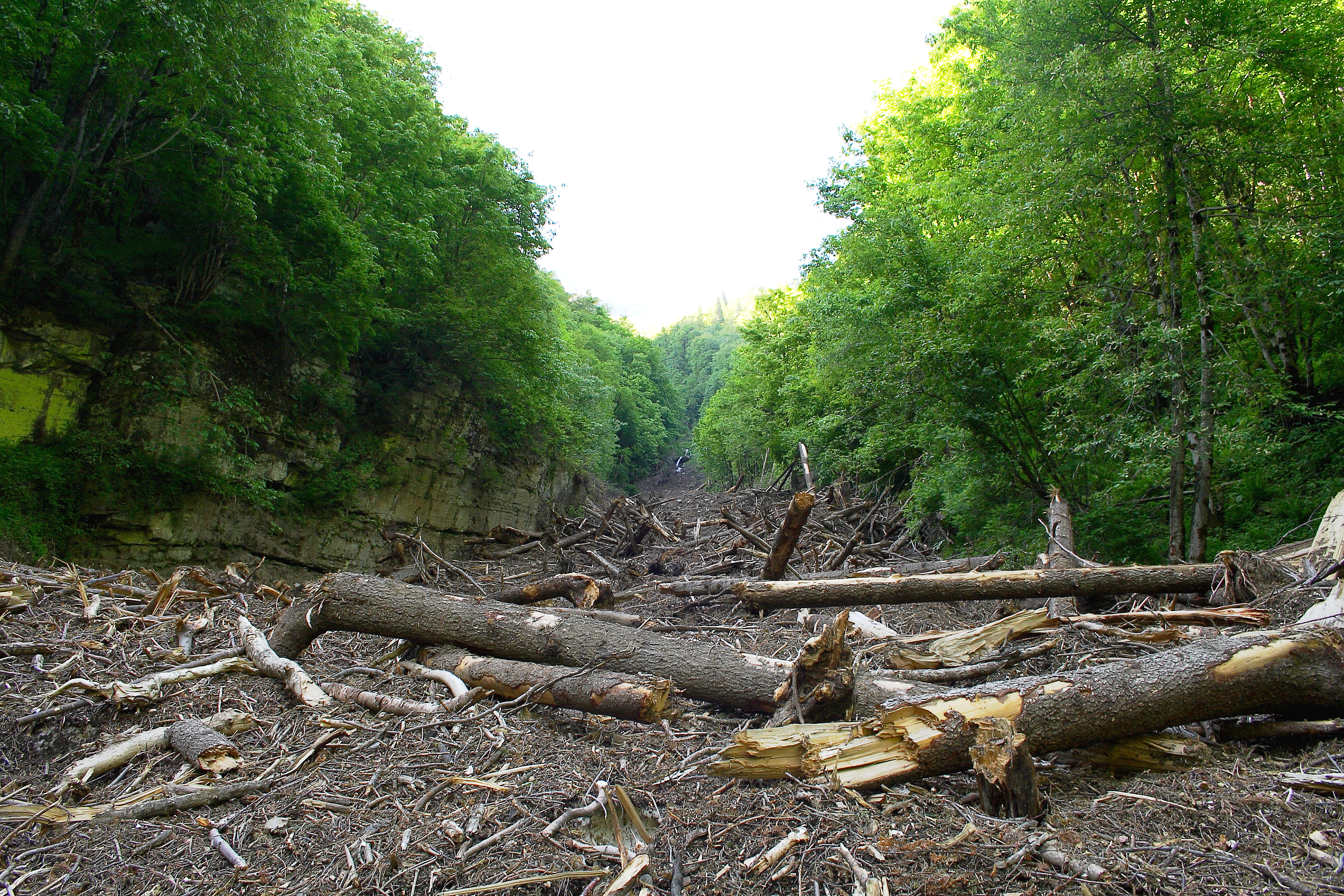 In mid-May 2011, while climbing a trail in Sainj valley, the author witnessed the calamitous aftermath of a glacial outburst – uprooted old-growth trees and enormous strewn boulders. A warming micro-climate is causing catastrophic events that will further aggravate habitat fragmentation that will in turn impact the Himalayan brown bear and other native species.

The sheer remoteness and difficult terrain have helped shield some of the rarest of Himalayan wildlife in these pristine forests. Deep inside the core area of the Great Himalayan National Park (GHNP), it is bear country and for someone on the lookout, signs are hard to miss. Yet, direct sightings of the brown bear are very rare. Life can be tough in the Himalayan highlands and an adaptation to a plant-heavy diet does make more sense for an omnivore. The Himalayan brown bear makes altitudinal movements correlated with the state of the climate and corresponding availability of food sources from upper temperate forests to treeline and over to alpine areas. Near 2,800 m., I was delighted to confirm the first characteristic signs of the Himalayan brown bear.

Signs of a changing climate are sometimes subtler. A few days later and further up in the valley in Dhel area, I sighted a blue admiral Kaniska canace butterfly basking in a high meadow near the treeline. All previous records of this butterfly placed it no higher than 3,000 m., and here was one making merry at 3,466 m. A new altitudinal record for Kaniska canace could also be due to the fact that the climate is now changing in the Himalaya. Sacrosanct Eco-Sensitive Zones of considerable size, providing the required buffer to Protected Areas, are needed more than ever in the Himalaya. The changing climate is set to affect all species native to this region. Naturally, the Himalayan brown bear, whose ecology is so intricately intertwined with the state of the climate, would be among the most significantly impacted in more ways than imaginable today, potentially bringing it into greater conflict with other predators and worse, humans. 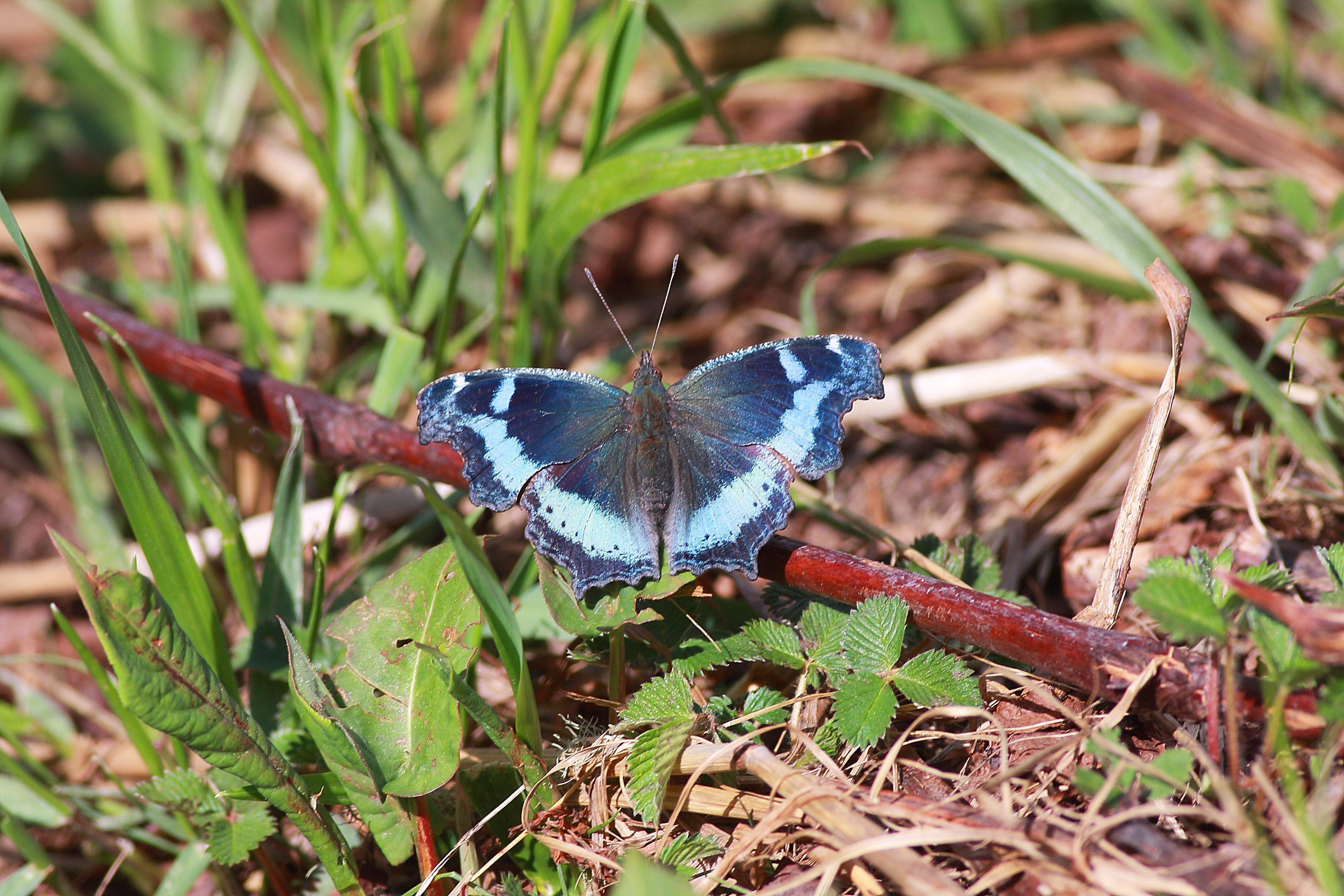 A blue admiral butterfly basking in the meadows at 3,466 m. is a subtle sign of climate change; the butterfly had previously never been recorded at altitudes over 3,000 m.

Reading the signs over the last few days and connecting the dots, I had made a prediction about possible bear movement. In the pre-dawn darkness of 4:30 a.m., three of us hit the trail vanishing into a dense kharsu oak Quercus semecarpifolia forest. Around 5:10 a.m., a wailing call by the enigmatic Western Tragopan Tragopan melanocephalus distracted us, but we stayed put. Stuck in inclement weather in a remote part of the valley, with disappointingly no direct sightings so far, I finally got a fleeting but unforgettable sighting of a mother brown bear and cub. Leaving us speechless with hearts thumping, the pair went out of sight in barely five minutes, as mysteriously as they had arrived. A long and continuous nine-hour wait left me elated with this sighting that I will cherish for the rest of my life. My cramped legs felt much relieved as I had been nearly static, hiding at my waiting point, never minding the heavy showers that battered me for three hours after twilight. An obeisance at the Jogni, an outdoor prayer site dedicated to the guardian spirit of these forests, followed soon after the bears revealed themselves. 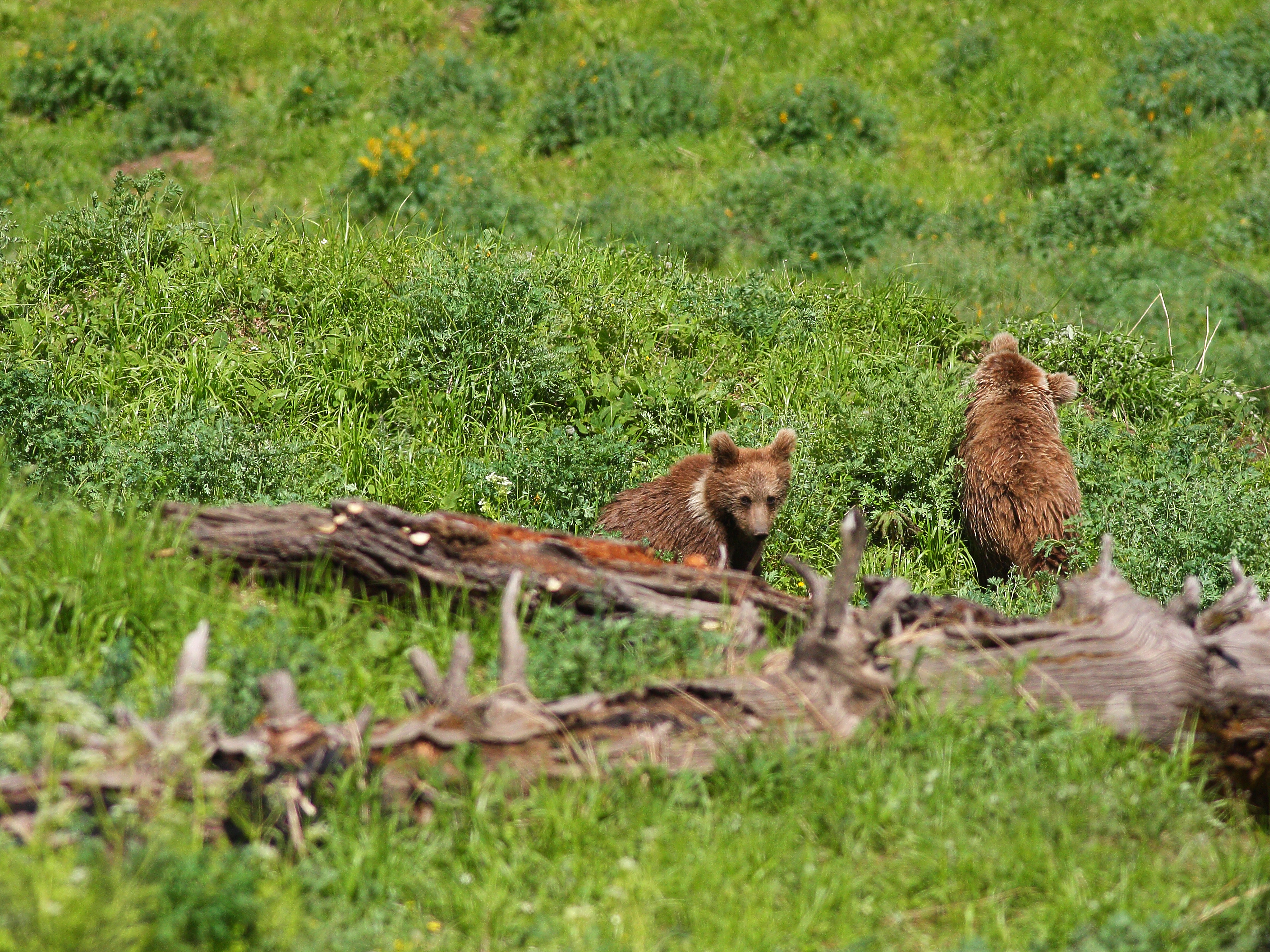 Dwindling populations of the Himalayan brown bear Ursus arctos isabellinus can be found in the Great Himalayan National Park Conservation Area (GHNPCA), along with the Kugti and Tundah Wildlife Sanctuaries in the Dhauladhars.

Four years later, in mid-March 2015, an upper temperate forest floor in Tirthan valley of GHNP exhibited huge sprawling patches of earth that had been dug up and ploughed by oversized claws. Stones and dead wood lay tossed by the bear in search of ants and termites. Fresh bear claw marks and unmistakable brown hair left behind from scraping its back on a kharsu oak tree attested to the fact that the Himalayan brown bear had already awoken from its winter hibernation. In some places, early growing Himalayan herbs like the endangered nag chhatri Trillium govanianum had begun to shoot from underneath leaf litter. For me, it was hard to miss the connection. Least-arboreal it may be, but by the sheer scale of its sprawling ground work, the brown bear too helps the understorey and meadows around here to regenerate.

Brown bear pug marks and signs of digging were not limited to flatter ground but extended all the way to steep, still thawing, slopes of 60-70° incline. My guide Basant hinted at a likely bear crossing point not very far from our seriously cramped rock shelter. It was around midnight and a loud growl startled us all. The bear regularly strolled past this point in the forest – we heard the growl around the same time for three nights in a row here. Blessed with a legendary sense of smell, the brown bear could sense human presence extremely well and liked to keep its distance.

With the advent of summer, trekkers lay claim to camping grounds in subalpine and alpine meadows and often damage the rhododendron shrubs for fuelwood and bonfires. The practice is most unregulated outside our Protected Areas. Unscientific collection of herbs and mushrooms also adds to the woes of the brown bear. Guchhi Morchella esculenta, the highly-prized morel mushroom, sought after by mushroom collectors is on the menu of the brown bear too for the rich protein it has to offer. The brown bear, still building up lost fat from its hibernation and looking for shoots, roots, bulbs and tubers to dig, is often forced to retreat from its foraging grounds. 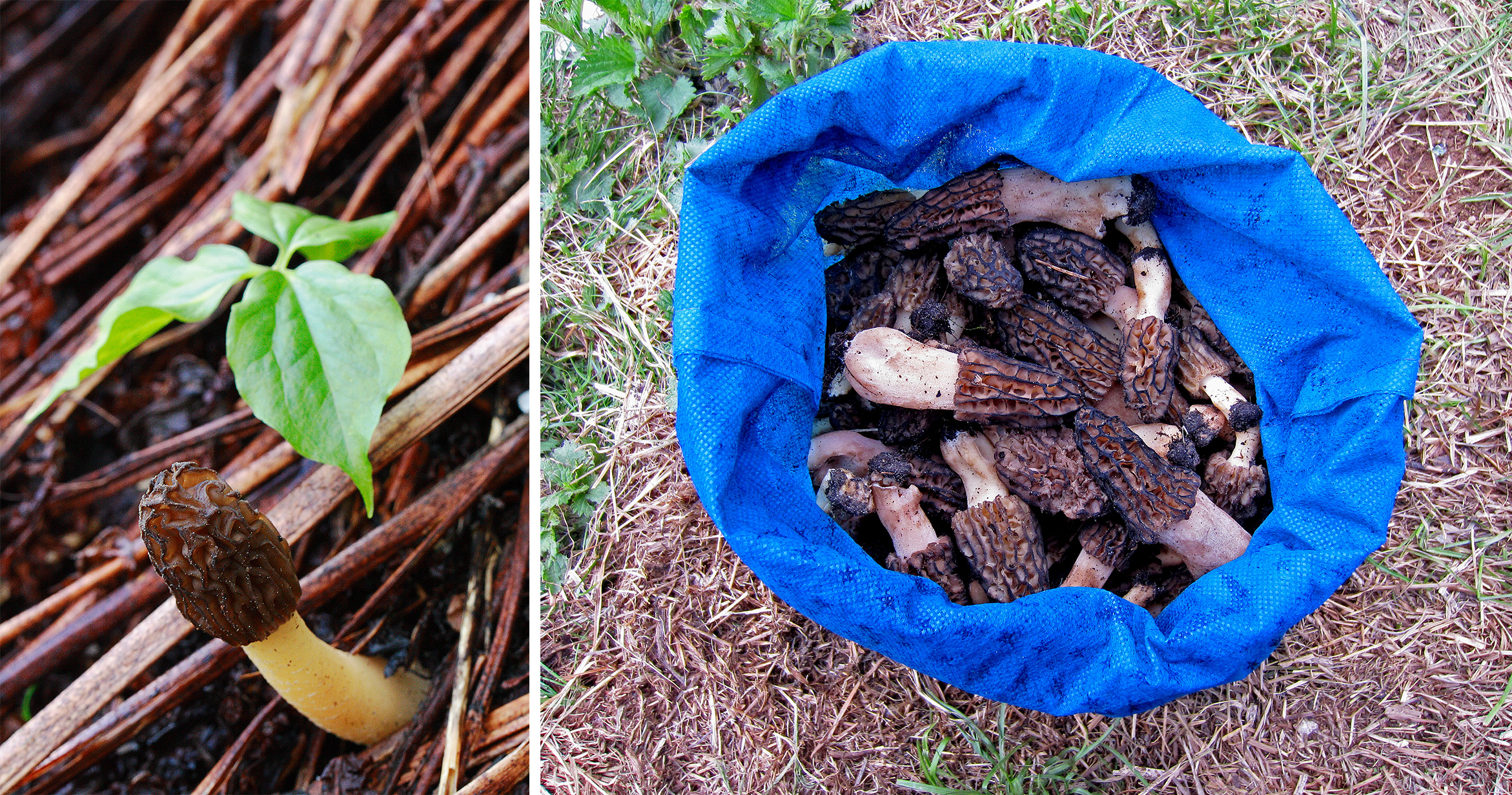 (Left) The typical three-leafed shoot of nag chhatri Trillium govanianum, an endangered Himalayan herb found in the GHNP, growing beside a smaller variety of guchhi Morchella sp., an edible fungi. (Right) A day’s haul of guchhi Morchella esculenta displayed by a villager from the GHNP Eco-zone. Gucchi, a highly-prized morel mushroom sought after by mushroom collectors, is a vital protein-rich source for the Himalayan brown bear seeking nutrition after months of hibernation; unchecked collection and disturbances by humans have forced the animals to retreat from their usual foraging grounds

Both the Himalayan brown bear and mountain pastoralists vie for seasonal bounties offered by verdant mountain pastures. For centuries, before the gun landed in the hands of the shepherd, this crossing of paths worked to the advantage of the brown bear who benefited from a sumptuous source of easy protein herded into its domain. Brown bear attacks on livestock are more common at night, curiously more around midnight, but will happen during daytime as well. The indomitable shepherd dogs, brought along to keep large predators like leopards and bears at bay, will counter-attack a predating bear. Though fabled as jovial-natured, an irate shepherd may shoot down the bear if it keeps attacking the camp, for the sheep and goat are all he has to protect for a living. The competition for resources is real but the management of this conflict is possible.

Gaddis and Puhals, ethnologically significant semi-nomadic pastoralists of Himachal, will continue to cross paths with the Himalayan brown bear as they have for centuries. If made partners in conservation, they can help record bear movements and numbers in remote valleys. In high valleys with an active bear presence, grazing activities need to be carefully staggered in order to prioritise foraging by bears, at least during the leaner months. Mountain pastoralists should be educated about mitigating conflicts with the bear along with a stricter control over use of firearms. No one knows the ways of the Himalayan brown bear more than these hardy mountain men who should be involved in the preliminary census, which is crucial for creating a meaningful conservation action plan. Himalayan brown bear populations have the potential to spring back and reclaim their niches if their last remaining breeding and foraging habitats are managed wisely. 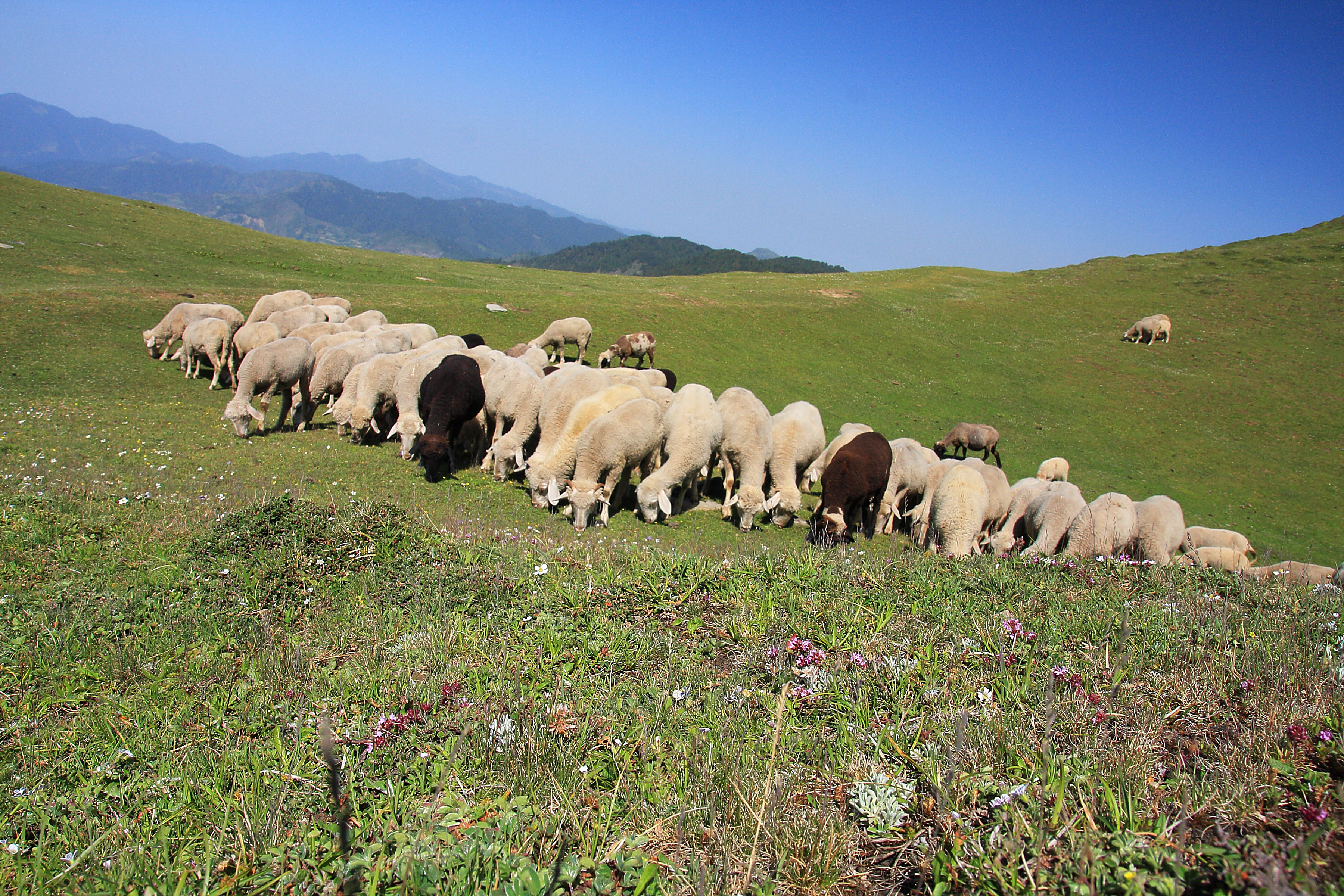 While all grazing activities are prohibited within the boundaries of GHNP, overgrazing by livestock such as sheep is routine elsewhere in subalpine meadows on the outskirts of the park.

A Forgotten Bear
Historically hunted for its luxurious coat, body parts and as a trophy, the isolated population of the Himalayan brown bear from the Himalaya mountains is now Endangered according to the IUCN Red List. Facing an ever-increasing threat to its survival in a shrinking distribution, the brown bear is being forced to retreat further and further due to competition for resources, habitat degradation, disturbances by herb collectors, pastoralists and trekkers alike. Add to this the loss of genetic diversity from a reduced gene flow between tiny and fragmented populations and we have a disaster in the making.
The changing climate in the Himalaya, both in its subtle and dramatic forms, is only exacerbating its already uncertain future. Now largely confined to a few remote valleys in challenging mountainous terrain, the last remaining populations stand pushed to the corner. With no reliable estimates of a dwindling population and no conservation action plan, the Himalayan brown bear is clearly a bear that India has ostensibly chosen to forget.

An aerodynamicist and a conservation photographer, Gaurav Sharma has a special interest in the ecology and conservation of threatened Himalayan wildlife. For over 15 years, he has documented the biodiversity and conservation issues in his home state of Himachal Pradesh. He would like to acknowledge the officers and staff of the Great Himalayan National Park (Sandeep Sharma, Ajay Srivastav, Bhupinder Rana and Durga Singh Thakur) for their support and permissions; and Durga Singh Thakur and Basant Singh for the field support