On a pleasant, sunny winter morning in Delhi this January, a motley crew of researchers and nature enthusiasts strolled through the Asola Butterfly Park, conducting a population count of a particular butterfly. A butterfly that was polka dotted, orange, white and black from the outside, bold orange and black on the inside and finished with a neat pearly trim – the red pierrot Talicada nyseus. Dr. Akash Gulalia of Delhi University was quick to spot the first one. Subsequently, our eyes began to focus earnestly and soon more of them were visible. 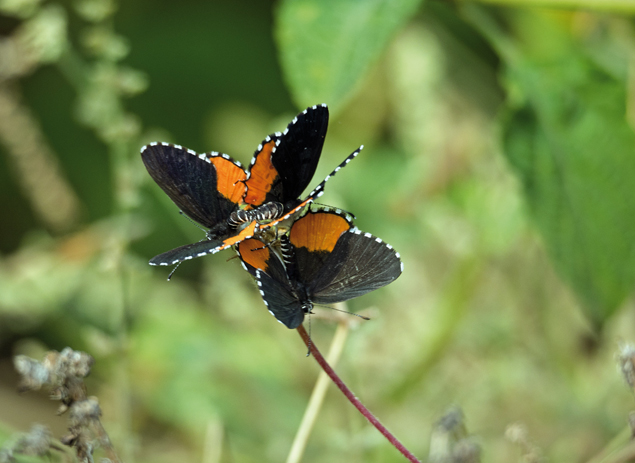 Three is a crowd: a male red pierrot tries to interrupt a mating pair on a Tridax procumbens, commonly known as coatbuttons flower.

What we were looking for were not the usual red pierrots. These were special, because the black portion of the upper side had unusual orange streaks on them. Sort of an orange flight path directed towards the abdomen. For quite some time now, these aberrations or variations have been spotted in Delhi. In fact, the presence of red pierrots here is in itself an enigma.

The definitive list of butterflies of Delhi compiled by Larsen & Toubro in the 1980s does not mention the red pierrot. The butterfly first made its presence felt in the early years of the 21st century, probably owing to the caterpillar’s habit of burrowing inside the leaves of the Kalanchoe plant, which acts as its host. The theory goes that plants brought from outside Delhi came with the butterfly inside them. At first it failed to establish itself and disappeared, according to a study published in the Journal of Threatened Taxa by Rajib Singh Bais (2015). 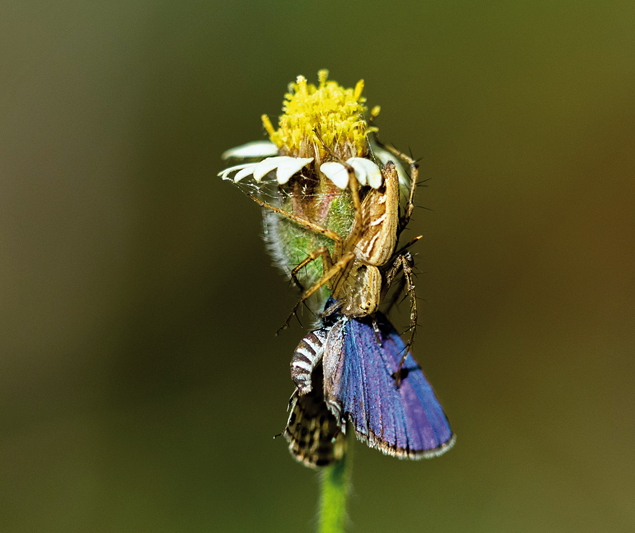 A coatbutton flower is witness to high drama: a well-camouflaged spider devours a Tarucus species butterfly. If you weren’t looking, you would miss this scene: both spider and butterfly are only about 70 mm. long.

Since 2016, the red pierrot has firmly established itself as a Delhi butterfly and by November 2017 the first aberrations or variations in colouring were noticed. Over the years we have noticed these variations becoming quite common in Delhi. In fact, the January 2019 survey concluded that over 50 per cent of the red pierrots counted were of the aberrant kind. The variation in question is not only getting common in Delhi, but has been recorded as far as Jammu in the North and Chhattisgarh to the South. Why and how it is happening still remains a mystery, like much in nature. Nevertheless, observation could provide answers and we were able to track these fascinating changes because of a burgeoning citizen science movement
in Delhi.

In 2017, the Delhi Forest Department and BNHS initiated the first Butterfly Month in Delhi. Modelled on the ‘Big Butterfly Count’ of the United Kingdom started in 2010, with crowdsourcing aiding important population data for the scientific community.

Our aim was to do butterfly counts in a mosaic of parks and woodland habitats. The idea was to rope in enthusiasts, mentored by a team leader and produce butterfly counts. The results were encouraging. A total of 69 species in 14 areas across different forest patches in the city were counted. Some of the rare butterflies spotted were psyche Leptosia nina, chocolate pansy Junonia iphita and red flash Rapala iarbus. 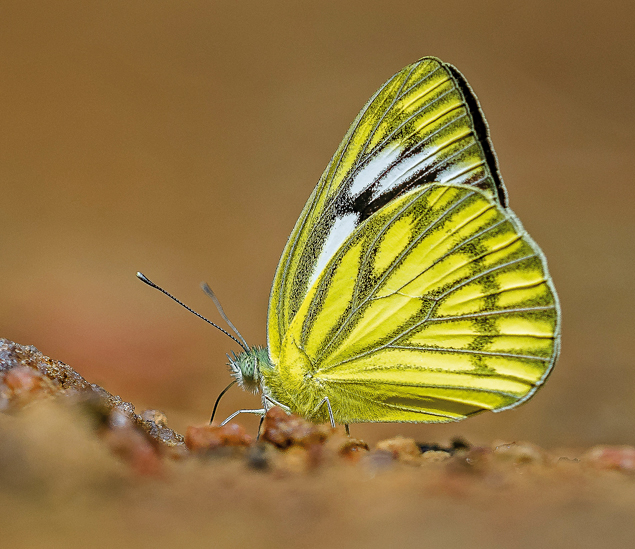 The common gull is native to dry areas. It lays eggs on red-blooming kair Capparis decidua or caper bushes, and therefore is predominant in the Aravalli hill range. Swarms of this butterfly are seen in the Aravallis in April and May.

In 2018, we went bigger. Citizen scientists, numbering upwards of 3,000 people, engaged in butterfly counts in 18 universities, 21 schools and 35 parks around the city. 51 locations, including a mix of forest and urban areas like Lodhi gardens, Sunder Nursery, Okhla Bird Sanctuary, Raj Ghat and District Park Dwarka were scoured across the city. A total of 75 butterfly species were listed. We recorded some rare ones such as the common redeye Matapa aria, common short silverline Spindasis ictis, spotted pierrot Tarucus callinara, dingy swift Gegenes nostradamus, common lineblue Prosotas nora and Balkan pierrot Tarucus balkanicus. What surprised us was that the rare butterflies were recorded not from Protected Areas, but public parks! This underscored the need to really urbanise the movement. More eyes on the unprotected areas might lead to answers on how butterflies cope in urban areas. 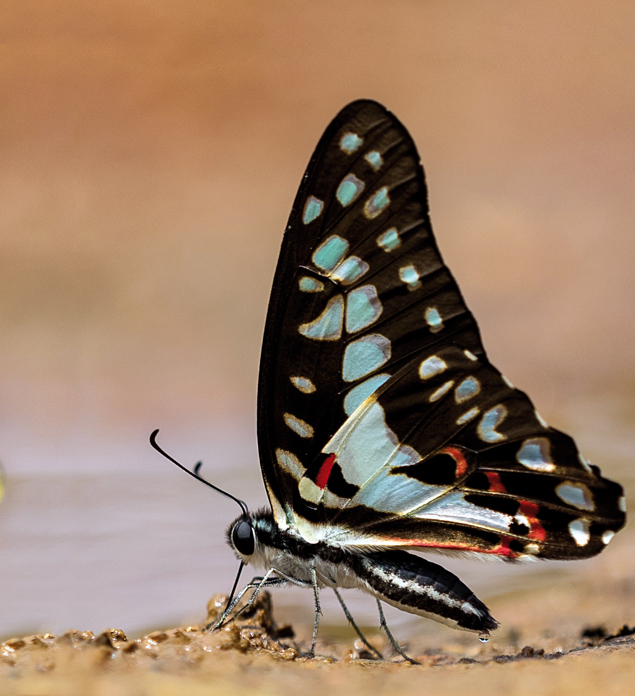 The dazzling common jay,  a swallowtail butterfly with a neat stripe on its abdomen and a brilliant speckled wing pattern, is often seen near Ashoka trees. Swallowtail butterflies often get rid of excess fluid as seen in this image after they have extracted salts from the mud.

The study also indicated that habitat features influence the presence of butterflies and insects. Denser green spaces in the neighbourhood were conducive to butterfly diversity. High canopy cover and tree density supported more biodiversity, and shrubs and herbs in the neighbourhood parks were crucial for butterflies and insects. The presence of grass, wild or otherwise in parks, also influenced the density of butterflies. Hence by redesigning parks, we can help improve the biodiversity services the park offers to the community living around it.

Meanwhile, the red pierrot population survey for the day was winding down and talk generally shifted to the experience of the butterfly month itself. “Walkers and joggers now know we are looking for butterflies. In a lifetime of looking for butterflies, people were always curious, now that has changed to greater awareness and knowledge,” said assistant professor Dr. Rajesh Chaudhary from Delhi University, a veteran butterfly watcher in Delhi for over two decades. 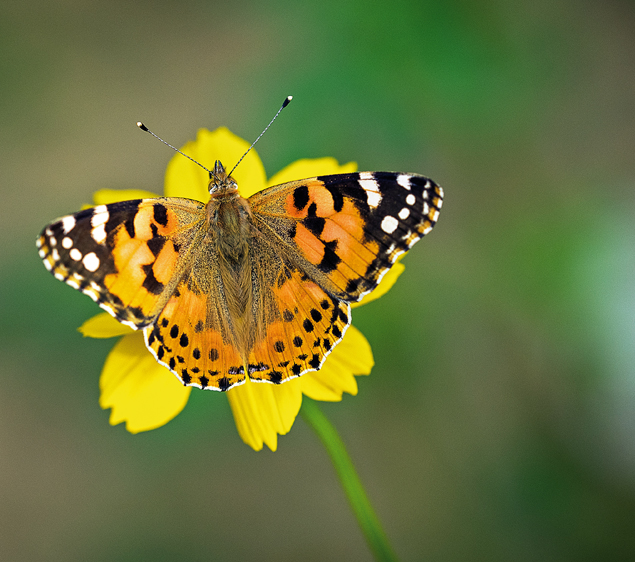 The migration of painted lady butterflies is one of the wonders of the natural world. Travelling at speeds of 48 kmph., these seemingly fragile creatures seasonally migrate thousands of kilometres across the globe.

This remark got me thinking. My journey into the fascinating world of butterflies began in the winter of 2014, when I was tasked by the Delhi Forest Department to create a four-acre open butterfly habitat to serve as a place to introduce visitors coming to Asola Bhatti Wildlife Sanctuary to urban wildlife. After an extensive literature survey, which included getting all reading material on butterflies and gardening in general, we visited projects built across the country including the Rao Jodh Park, Jodhpur, Bannerghatta Butterfly Park, Bengaluru, Arid Forest Research Institute, Butterfly Park, Chandigarh and Butterfly Research Centre, Bhimtal. We took notes, spoke with gardeners, scientists and researchers working at these facilities to gain insights into creating and maintaining a butterfly habitat in the semi-arid, dry deciduous forest type provided to us.

It took us nearly three years to compile data on butterflies of Delhi and their related host plants, including landscaping the site. In the summer of 2017, we opened the park on World Environment Day, to a massive public response. Our park was abuzz with butterflies, we were counting upwards of 30 species every day in our hourly counts and this was bringing in enthusiastic citizens to the park. People wanted to know and learn more, and photograph and identify those they would see around their own homes. Students and teachers wanted parks built at their schools and the buzz around butterflies was palpable.

This was the genesis of Delhi Butterfly Month in September 2017, which we dedicated to programmes based solely around butterflies to reach people of all ages. We wanted to mould this citizen science movement so that our park could serve as a learning tool for people interested in the butterflies of Delhi. In turn, we found them carrying this interest and knowledge to their own area where they conducted counts, or improved habitats to the advantage of butterflies. 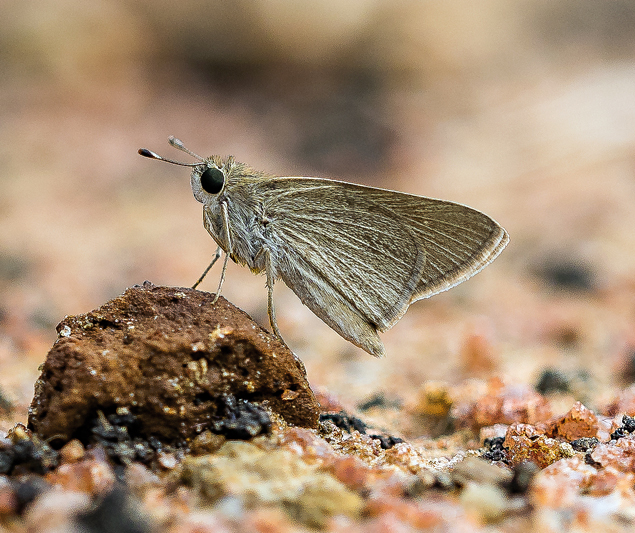 Some butterflies are often mistaken to be moths. The dingy swift’s dull colours often leads to its misidentification as a moth species. After a long gap, it was identified in Delhi during the 2018 Butterfly Count.

Going beyond the ‘Clean Delhi Green Delhi’ slogan, we began to infuse habitat characteristics that enhanced biodiversity. We promoted the idea that pesticides should be banned. We also changed perceptions on what it meant for a garden to be wild and how beautiful a caterpillar-eaten leaf looked. More often than not caterpillars do not eat the complete leaf, so fears that they might destroy the entire plant are unfounded.

Insects are vital to the existence of life on land. Sadly, however, their populations have crashed. The days when the windshields of our cars would get filled with dead insects are long gone. Our future vocabulary is now studded by words such as ‘Insectageddon’ or Insect Armageddon that describes the terrifying downward spiral of insect life on earth. One German nature reserve discovered that the abundance of its flying insects had plummeted by 76 per cent over 27 years. Other global studies revealed earlier this year, that over 40 per cent of insect species are on a decline. Although some scientists have criticised this particular study as too imprecise, there is ample precise data on British butterflies, which have been scientifically monitored since 1976. Chemical farming, habitat loss and climate breakdown are increasingly recognised as key drivers of butterfly decline, dropping by as much as 58 per cent on farmlands in England between 2000 and 2009. This, despite doubling the conservation spend.

Keeping in mind the urgency, our aim now is to celebrate butterflies on a pan-India level in 2019 by forging partnerships across the country and using Indian websites such as www.ifoundbutterflies.org to collate data. We are also working to create two green corridors connecting the forest patches of North and South Delhi, one along the Yamuna plains, and another along the Aravalli range.

This is not by any measure a public relations push for butterflies, nor an awareness campaign about declining populations of these powerful biological health indicators. It’s a stealth struggle to boost our cities’ state of mind. Spending time with nature offers us valuable breathing space away from the pressures and strains of modern life. It enables us to experience bliss and wonder, to slow down and to appreciate the wildlife that lives alongside us.

Watching butterflies is fascinating and therapeutic, and we all can do it. Choose a patch that you keep poison free, plant the right natives and let nature do the rest. Grow the plants that will attract butterflies and locals will be able to savour species including the common mormons Papilio polytes that visit kadi patta Murraya koenigii plants, plain Danaus chrysippus and common tigers Danaus genutia that make a bee line for the annuals, yellow pansies Junonia hierta on marigold flowers, Danaid eggflies Hypolimnas misippus that mimic tiger butterflies but can be recognised by their skittishness, pierrots Tarucus sp. fighting over territories of small wild flowers in endless round flights, common gulls Cepora nerissa and pioneer Belenois aurota butterflies swarming in April and great eggflies Hypolimnas bolina perching on a high branch looking over their territory like a wise sage. Butterflies can turn almost anyone into a naturalist.

I owe so much to butterflies personally for enhancing the quality of my life. I urge Sanctuary readers to enter their wonderful world, which can so gently lend a purpose to our own.