As a wildlife photographer, I’m conscious of my bias towards birds, large mammals, snakes and frogs. The diversity of birds that thrive across various habitats in the subcontinent astound me. But when I picked up a macro lens, a new world opened up to me – a heterogenous, thriving world in a single square metre patch of earth. Every other leaf had a cricket perched on it. Brown, wiry-thin grasshoppers leapt about, landing clumsily on stems and leaves. Lynx spiders scurried through the undersides of vegetation. Planthoppers appeared on and disappeared from blades of grass, seemingly out and into thin air. Coupled with treehoppers and leafhoppers, they were extremely diverse in appearance, sporting intricate head structures, striking colours and impressive camouflage.

One species that caught my prolonged attention was the Lessert’s rainbow jumping spider or rainbow jumper Stenaelurillus lesserti. Eager to learn about this charming little arachnid that I spotted near my home, I visited the same patch daily to observe its behaviour. And in the process, learned more about lynx spiders, other jumping spiders, and clown grasshoppers.

Don’t be fooled by the unassuming size of the Lessert’s spider. It is a spectacular predator. Given its miniature size and habitat, it is usually spotted more often from above, and from this angle, they look like the typical jumping spider – an abdomen slightly larger than its cephalothorax. If you crouch to the ground and come face to face with a male, you will see an extravagant display of colours on its nanoscopic visage. Two pairs of glassy eyes are underlined by two bright red bands and one iridescent blueish purple. Like mammals, spiders possess a femur (the top section of their arm), on which males sport a red stripe, the purpose of which I was to learn later. 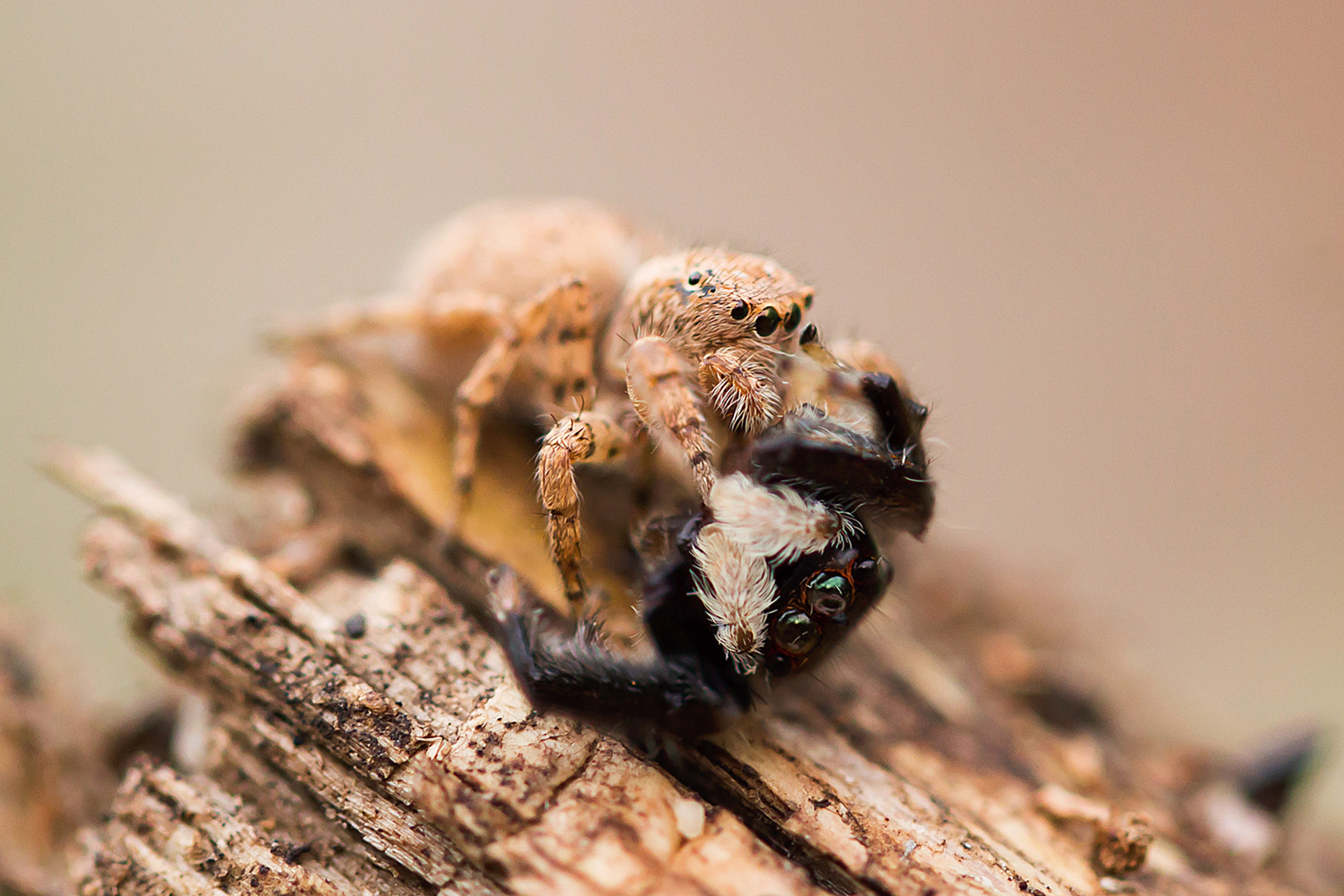 Despite their size, spiders are spectacular ambush predators. There have even been documented instances of cannibalism. Photo:Sanjay Prasad Ganguli.

In the world of spiders, a game of ambush is often at play. Some species wait for an unsuspecting insect to come close. Lynx spiders are among them, perching near a flower to look for pollinators. Orb weavers fashion a geometrically-sound web smack-dab in the middle of an aerial highway to entangle moths and flies. Then there are jumping spiders that actively stalk their prey, moving silently from leaf to leaf until they’re close enough to land a deadly strike. 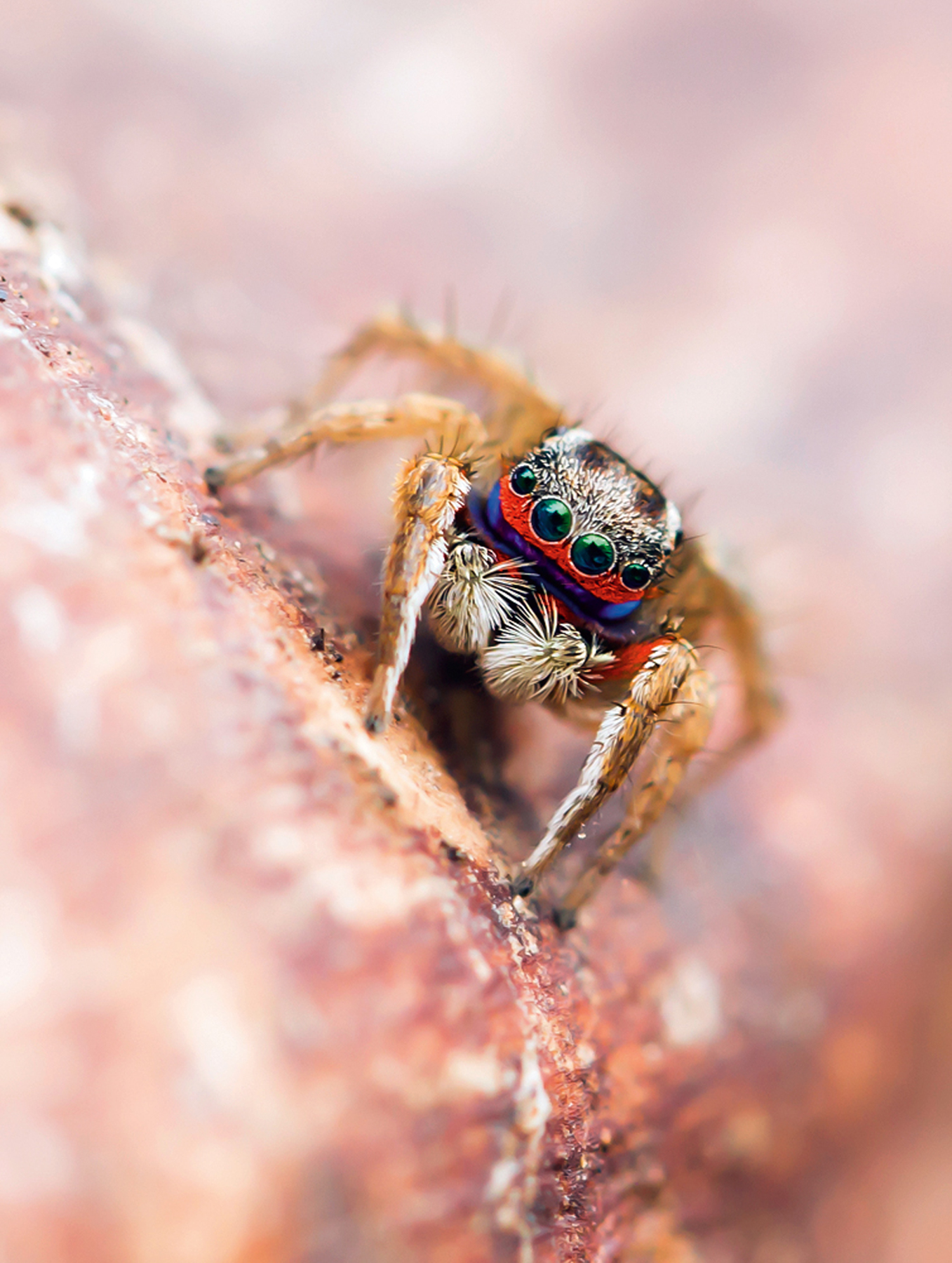 A closer look at the Lessert’s spider’s face provides a clue to the origin of its name – it sports two bright red bands and one iridescent blueish purple band beneath its eyes, with a red streak on its femur. Photo:Sanjay Prasad Ganguli.

The Lessert’s jumping spiders, however, don’t interact much with other insects. Their most common prey are the lilliput-sized arthropods that are practically invisible to the naked eye – it was only when I peered through a macro lens that I could see the substrates crawling with them. The spiders would position themselves right in the middle of the masses and pounce on any individual that crawled too close. Male rainbow jumpers are distinctly smaller than females and to them, even an ant can seem highly intimidating. Each time an ant crawled onto the same leaf or twig the spider was on, it sat still waiting for the ant to pass, or took off instantly. You can understand my surprise then, when one day I found the mandibles of a male clamped firmly onto the back of a termite’s neck.

I would often hear the unmistakable rustle of termites gathering hastily on a heap of brittle Nungu (palmyra or toddy palm) fronds. This is a behaviour commonly observed when a colony of termites is threatened or disturbed. Despite being naturally blind, every member of the colony would bang their heads against the tunnel wall to create a rustling vibration, with extraordinary coordination. Although highly active, termites never venture outside their nest during the day, and rainbow jumpers never hunted at night. It was thus quite unlikely that the two species could be part of the same food chain. 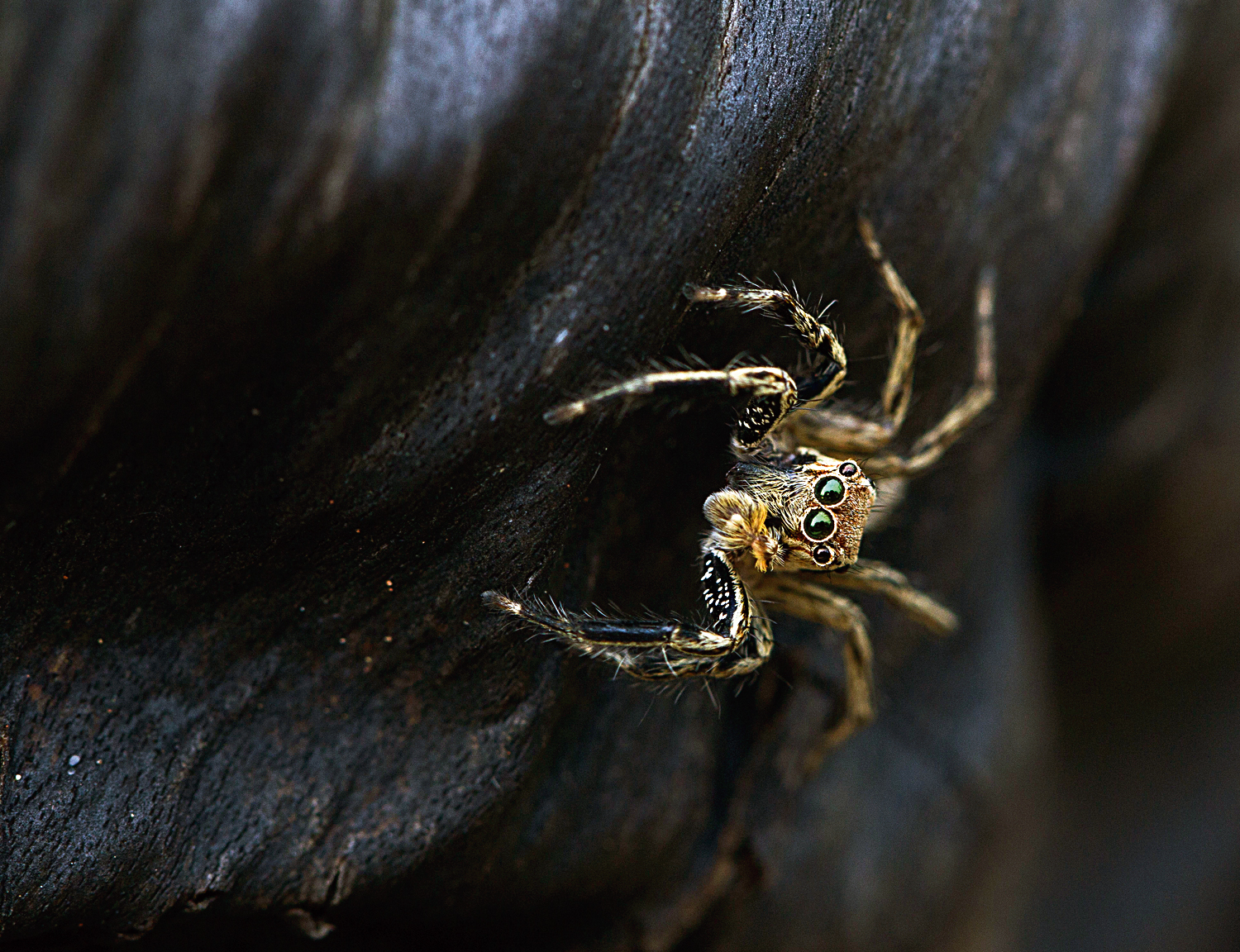 The jumping spider Plexippus petersi is much larger than the rainbow jumping spider, but employs the same hunting tactics of stalking and pouncing on its prey. Photo:Sanjay Prasad Ganguli.

Yet here they were – a male and a female rainbow jumper feasting heartily on termite! The larger female had no problem immobilising its prey, but the male was a comical sight altogether. For the first few seconds, they tumbled around as the termite desperately struggled to free itself. Spiders don’t like to eat their meals in the conventional way of biting and chewing on their prey until it has been killed. Instead, they use their venom to digest the insides of their kill, then slowly suck them all out and discard the empty carcass. 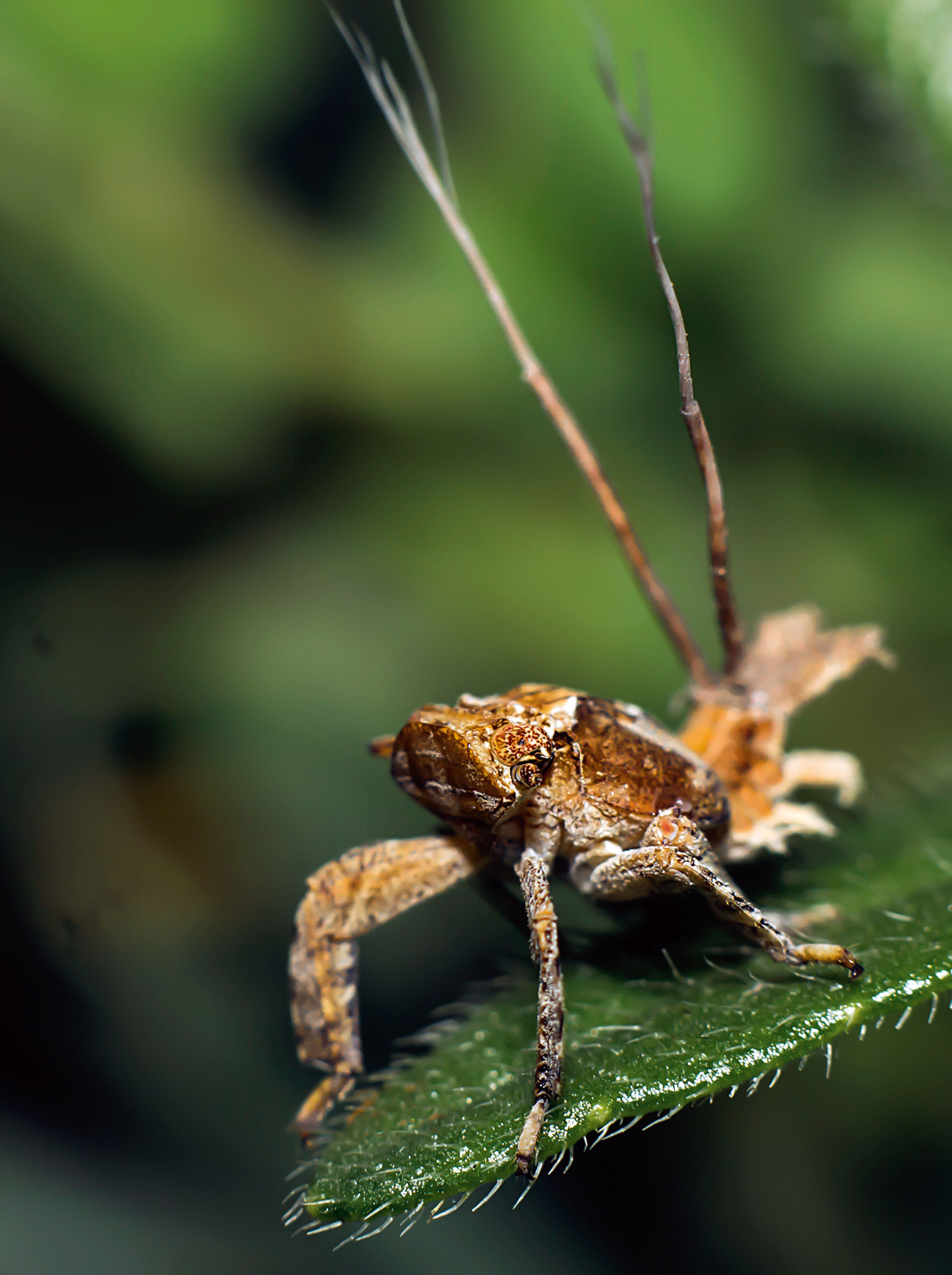 The author’s introduction to a macro lens opened up a diverse microscopic world to him. He discovered a stunning array of species including this frog-faced planthopper in the tropical, dry evergreen forests and arid, rocky, terrain near his hometown. Photo:Sanjay Prasad Ganguli.

I watched the little eight-legged wonders going about their daily business, leaping about and leaving a trail of silver thread behind them. Their habitat was cloaked in a tangle of stringy, shimmering silk. One day, I noticed a male moving ever so carefully from behind a cover of leaves, towards a female. Unsure of what was to follow, I focused my camera on the male. He appeared from around the foliage, and without warning, broke into a dance. Forelegs outstretched, he put on an impressive display of bright red and blue, stepping from side to side, as if briskly performing an aarthi. I could hardly believe my eyes – I was so amazed, I was unable to get a single photograph! So this was why they had such vibrant bands! My leisure days of simply gazing at the spiders were over as I realised there’s more to learn about this incredible species than I had previously thought.

In the days that followed, I came across several male rainbow jumpers that performed their curious routine for the larger females, that usually proceeded to aggressively drive them away.  The number of failed attempts were so high that one would think they were courting the wrong species. The males would chase off rival males in a show of colours and flailing arms; the losing males would run off without hesitation. Sometimes the females countered the males with a threatening display of their own if he was too persistent. I observed this mating dance only for about two weeks in September. At no other point did the males show any interest in the females, though they foraged and lived side by side. I am certain I missed the more successful moments of courtship that led to more rainbow jumpers scurrying about on the forest floor. 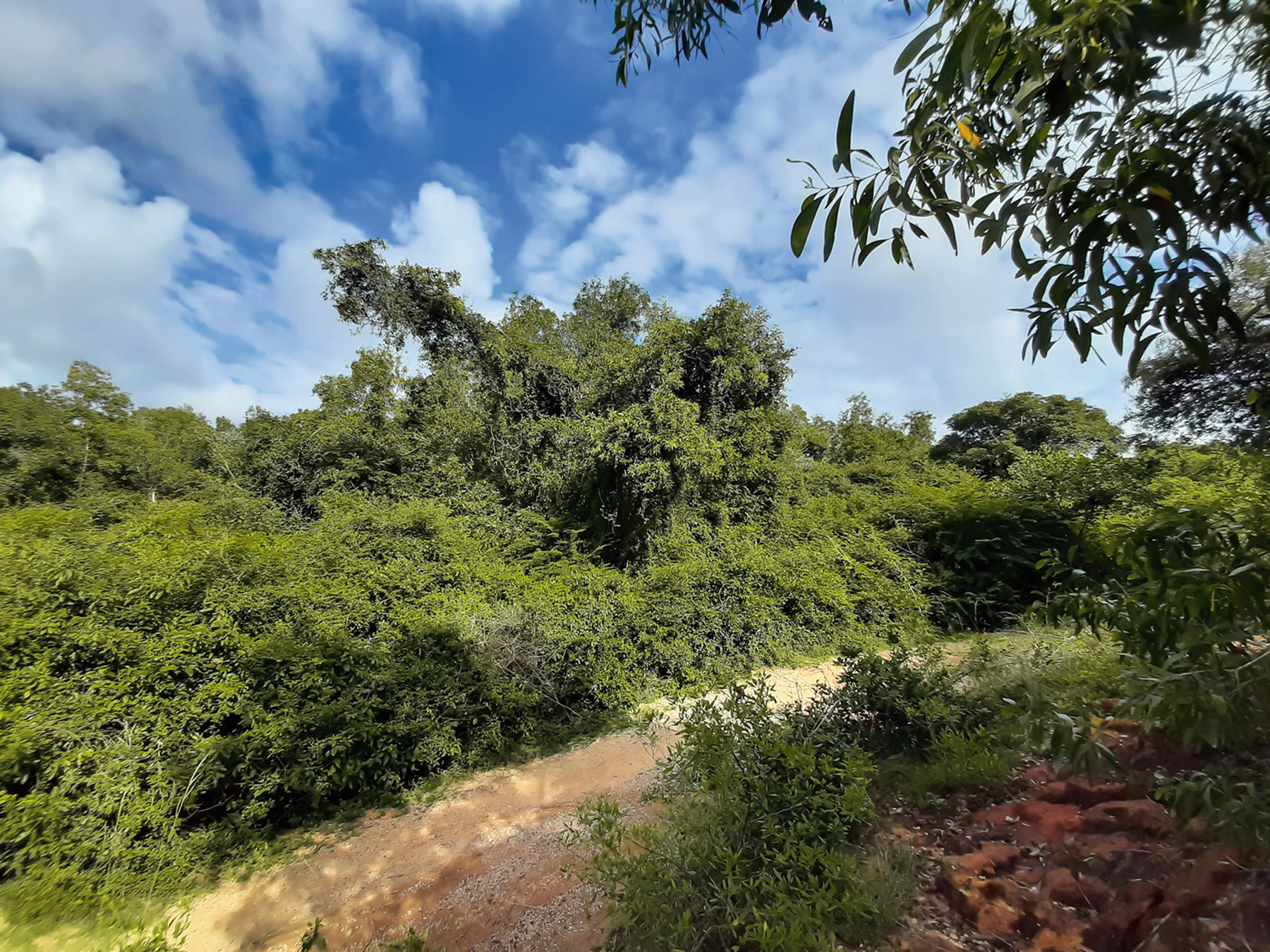 To successfully document even a few seconds of natural history, one has to spend endless hours in the field. Guides are important, their experience valuable to photographers and researchers. Additionally, homework prior to heading to the field is important too – reading scientific papers and watching video footage helps one understand and predict animal behaviour. In the case of this spider, I had exhausted all my options without any lead. To begin with, spiders are notoriously understudied, and the only literature I found merely described different species of jumping spiders under the genus Stenaelurilus. From photographing birds to picking up a macro lens has been an overwhelming and rewarding journey. As I pen this piece, I hope to add to the stock of dwindling information available on an incredible and diverse group of arthropods.