Dawn to Dusk on Deccan Grasslands

Update:
In January 2021, the Karnataka government announced the decision to designate the state's first wolf sanctuary in Koppal district, Karnataka, in what is a small, but exciting, victory for the efforts of the Deccan Conservation Fund. Using field data collected over five years, DCF prepared a baseline study and proposal for the 800-plus acre sanctuary in partnership with the Karnataka Forest Department. More proposals for similar micro-sanctuaries to preserve habitats for hyenas, sloth bears, and GIBs in the district are in the pipeline, including a project to radio collar wolves starting March 2021.

Daybreak. Night surrendered to day and the horizon, pregnant with an imminent sunrise, glowed in mauve and gold. Cooing doves woke the morning. In the remote wildernesses of northern Karnataka, we had just crossed twala halla, meaning “wolf creek” in Kannada, when we were rewarded with a serendipitous and rare sighting. A pack of three wolves was moving cautiously toward a small herd of blackbuck, using agricultural trenches and a patchwork of knee-high maize for cover.

I had hitched a ride with Indrajeet Ghorpade, founder of the Deccan Conservation Foundation (DCF), who was out on a field recce, armed with a camera. Expertly he maneuvered the SUV across the fallow fields taking advantage of earthen bunds for cover until we were within full frame distance of a 600 mm. lens. We watched the wolves as they hunted, in their prime landscape that is the Deccan grasslands.

Although there has been no national census of the Indian grey wolf Canis lupus pallipes, estimates range between 2,000 and 3,000 individuals, fewer than the number of tigers! Once roaming across the arid and semi-arid landscapes of Rajasthan, Punjab, the Deccan Plateau and Coimbatore Plateau, the species suffers due to loss of habitat and prey, which has turned them into victims of human-wildlife conflict.

A half hour later, elated by the memorable photographic opportunity, we parked the SUV on an elevated vantage point, broke open a thermos and celebrated with a steaming cuppa. The endless, undulating landscape of black cotton soil, cut by ribbons of dry stream beds in the troughs, brought back memories of my childhood. I grew up in this part of Koppal district. Decades ago, this vista looked very different from the monoculture now stretching to the horizon. Cultivated lands were interspersed with large swathes of thorny scrub and native grasses that provided valuable cover and nesting sites for the unique wildlife of the grasslands. Several herds of blackbuck would have been scattered around and sightings of the Great Indian Bustard (GIB) were common. 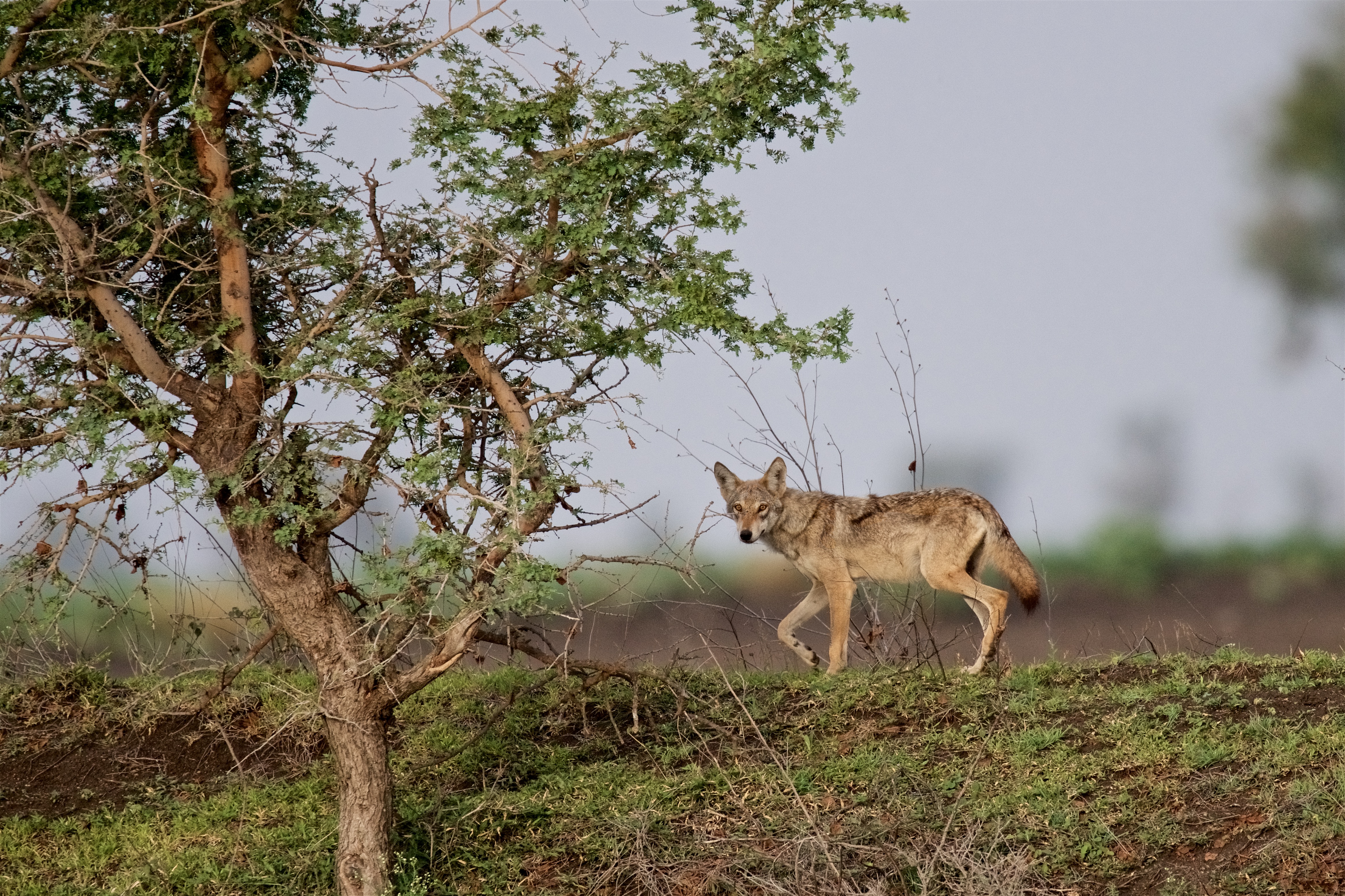 The Indian grey wolf is an apex predator of open grasslands that have been severely impacted because of their misguided classification as 'wastelands'. Photo: Shailendra Ghorpade.

Today, except for the small herd the wolves were tracking, there were no other blackbuck in sight. GIB have not been seen in the area for more than a decade. Something else was also missing. The dawn should have been greeted with an enthusiastic avian symphony filled with the tee-tar of the Grey Francolin, the high pitched did-he-do-it of the Red-wattled Lapwing, the melodious twitter of larks, and the parachuting song flight of pipits. But, this morning, it was muted.

Agriculture and urbanisation are often blamed for disappearing native habitat. Grasslands, however, face an additional threat. Government authorities frequently classify grasslands as “wastelands” and repurpose them for farming, housing projects, and industrial sites. Misguided afforestation projects have also destroyed grasslands and squeezed out near-endemic species like the wolf, chinkara, blackbuck, and birds like the GIB, Lesser Florican, stonecurlew, coursers, and sandgrouse that rely on these open plains.

Saving the wolf is DCF’s signature mission in the belief that, in turn, it will protect the entire ecosystem of the Deccan grasslands where it is the apex predator. There is logic to that argument. But large contiguous tracts of intact grasslands are now rare. The answer, according to DCF, is in preserving pockets of microhabitats that still exist. This string-of-pearls strategy is the pragmatic alternative to exclusively relying on large sanctuaries to save the grasslands. 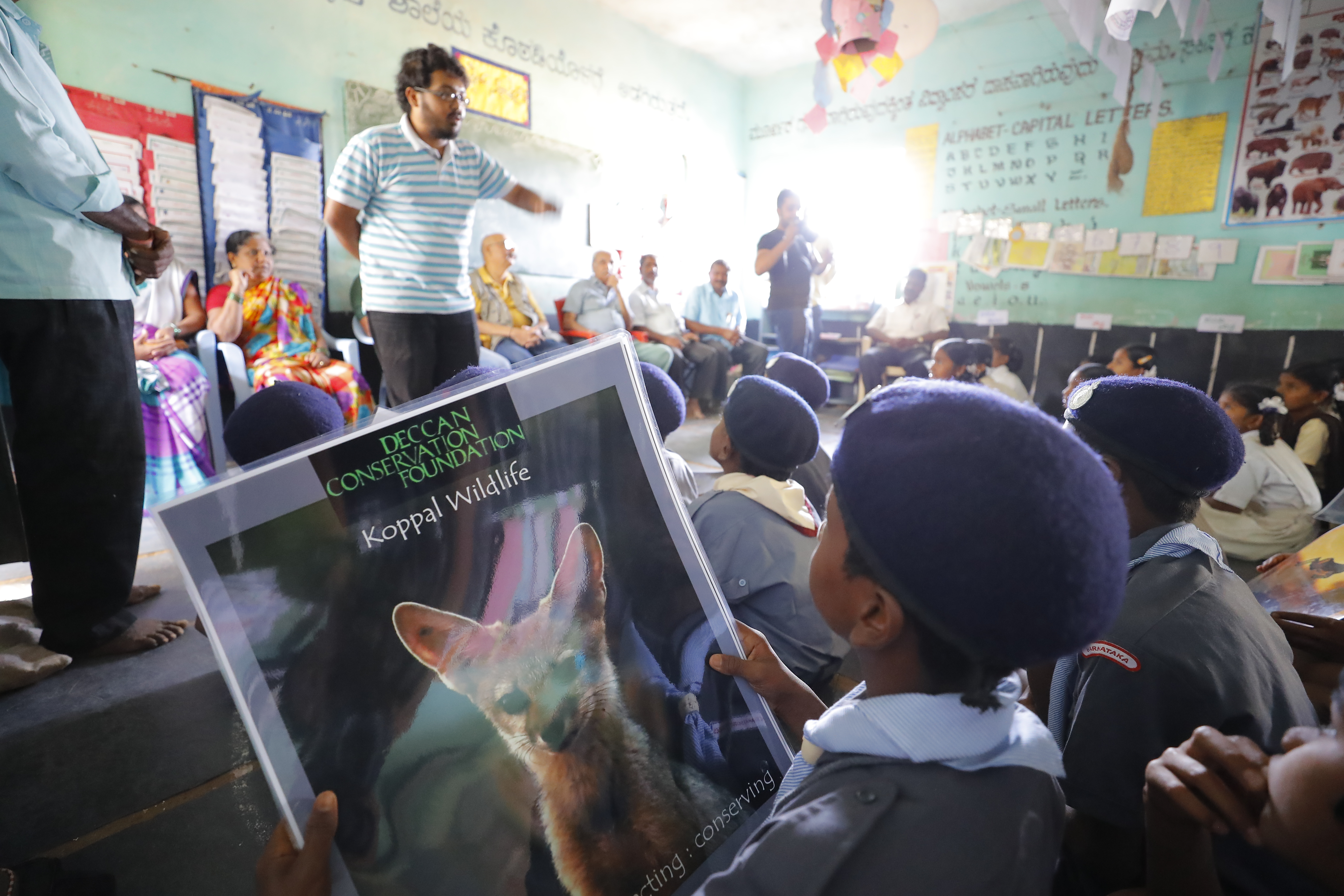 On our way back, we stopped to chat with a group of nomadic sheepherders whose livelihood is intertwined with the wolf. Faced with a paucity of natural prey, wolves are forced to snatch livestock. The shepherds have learned to live with their wild neighbour and affectionately refer to them as maternal uncles, Saudar Mama, with a right to their share of the flock. To create a better understanding and appreciation of the natural world, DCF is actively engaged with community leaders and schools in the area hoping to turn them into future custodians of their natural heritage. Educational films, community outreach discussions, hoardings at bus shelters, tree planting events, and sharing camera trap data with the Forest Department and research organisations are among the many tools DCF is using to spread the conservation message.

That evening, we wound down a dirt track in one of those microhabitats. A wolf den had been observed in this patch of dry thorny scrub strewn with rocky outcrops. Once heavily poached and illegally mined for its granite, the area is now relatively undisturbed due to the presence of several camera traps managed by DCF and vigilance by the Forest Department. These efforts are already paying dividends. A surprisingly diverse number of species has been recorded on the camera traps including leopards, sloth bears, striped hyenas, jungle cats, porcupines, jackals, and wolves with a litter of cubs. As the sun dipped below the horizon, a magnificent Indian Eagle-owl sounded off a deep bu-whoo from its perch on a housesized boulder. Its mate echoed from somewhere in the distance. It was dusk and daylight yielded to darkness as the nocturnal symphony returned for an encore performance.

Postscript: About three months after my visit, we received news that the carcasses of all three wolf siblings we had photographed were found, poisoned. The mission continues for DCF. 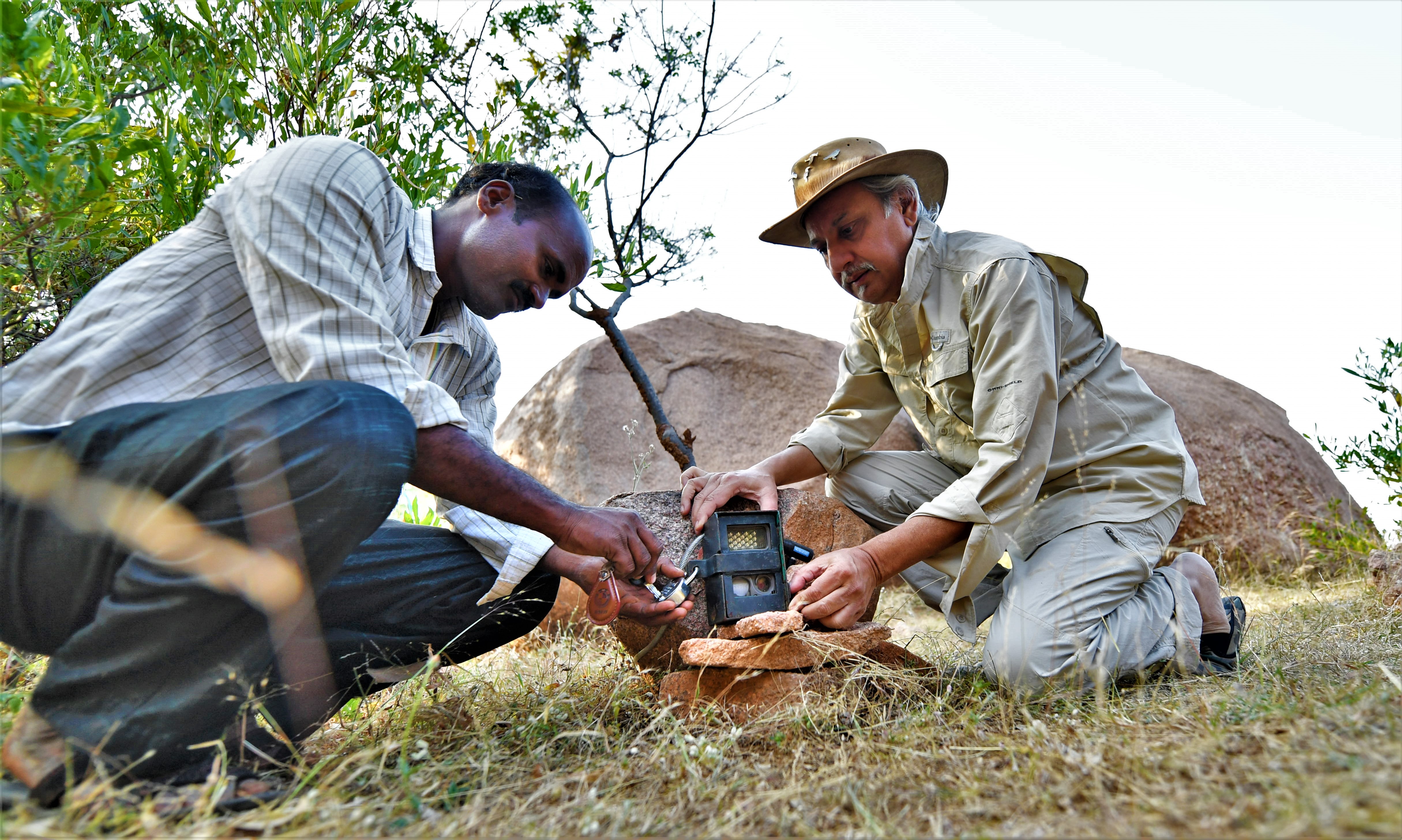 About the Deccan Conservation Foundation

Founded in 2015 by Indrajeet Ghorpade, DCF, works to conserve the rapidly disappearing grasslands, scrub jungles, and riverine ecosystems of Koppal district in north Karnataka, his ancestral home. Ghorpade was appointed Honorary Wildlife Warden by the state government. DCF partners with several research-based conservation organisations, the state Forest Department, and local communities to bring awareness about the need for conservation, facilitate antipoaching initiatives, and curb illegal trade in wildlife. DCF has worked with several documentary filmmakers to capture the wild Deccan.

Shailendra Ghorpade lives in the United States and visits his ancestral home in Koppal district every year. A wildlife enthusiast, he travels extensively and has photographed gorillas in Uganda, polar bears in the Canadian arctic, and wolves in India. His articles have appeared in various publications including the Washington Post and The Hindu.