Have you ever wondered what it is like to be inside a forest at night?

Not just any forest. A dense rainforest, with a canopy that blocks out the night sky. A forest so dark that you can’t even see the back of your hand, let alone other creatures that move around. Only the faint glow of bioluminescent fungi breaks the monochrome of this night. And every now and then, eerie calls reverberate through the forest. Owls.

This is what I went looking for inside the dark rainforests of Dehing Patkai.

Located in eastern Upper Assam, bordering the Patkai hills of Arunachal Pradesh, Dehing Patkai (locally pronounced 'Dihing' Patkai) is the last remaining lowland rainforest in India. Spanning over 900 sq. km., the forest exists in patches, surrounded by a mixture of tea plantations, paddy fields and villages. Dehing Patkai is famous for supporting 19 species of carnivores, including seven species of cats. What is less known about this landscape is its amazing owl diversity and abundance. 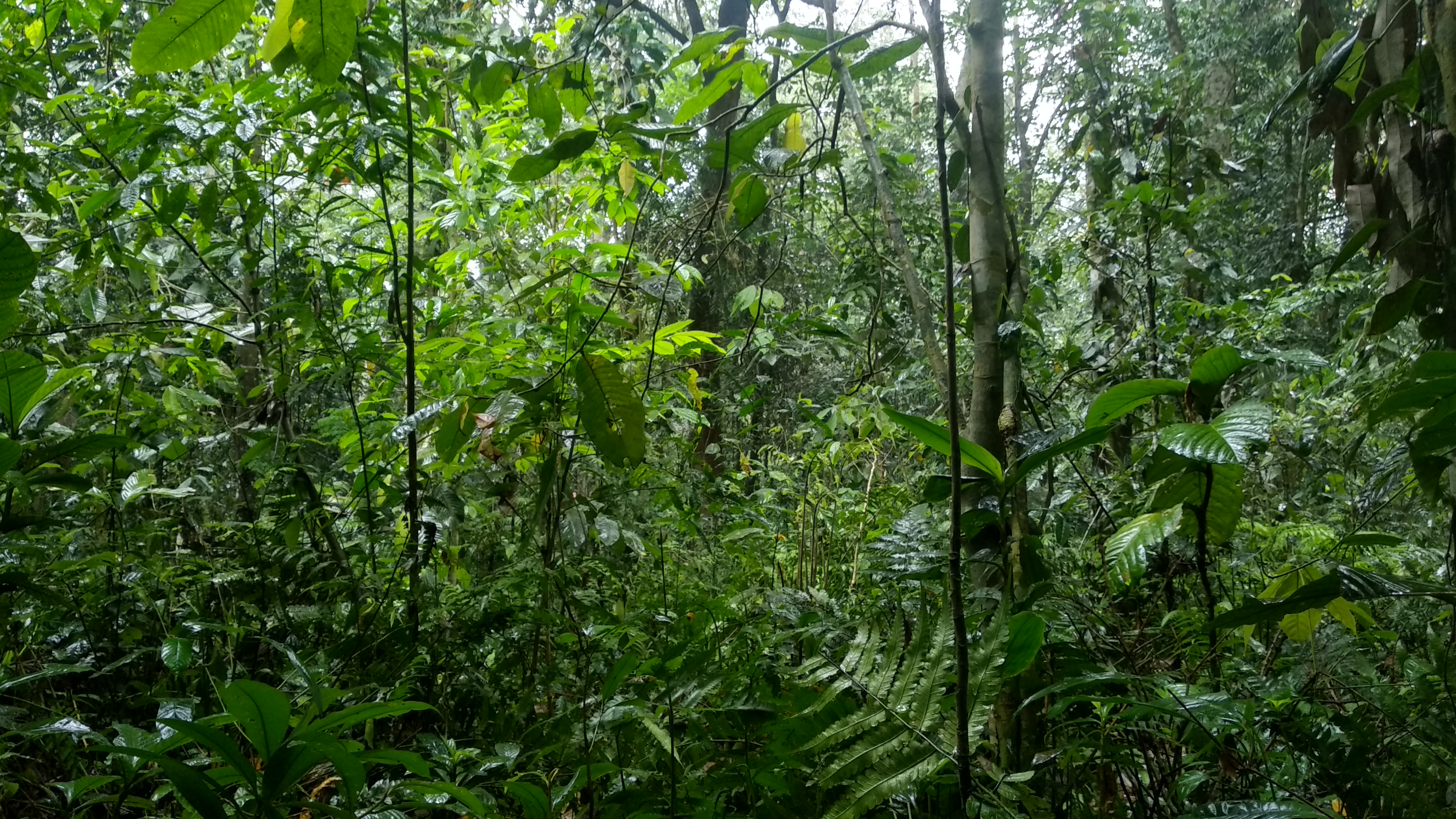 The dense rainforests of Dehing-Patkai. Photo by: Kaushik Sarkar.

Owls are one of the most charismatic groups of birds, yet so little is known about them. With their acute sense of hearing and vision, they are able to hunt a wide variety of prey including insects, mice, birds, reptiles and even mammals such as primates. As part of my Masters dissertation, I was interested in knowing what species of owls could be found along forest edges – the zone where the forest stops and a different land type begins. I was particularly interested in forest edges adjacent to agriculture and roads. Forest edges are interesting to ecologists because two different habitats meet here and many organisms like owls are able to utilise resources from both habitats and thrive (Comfort et al.,2016; Ries and Sisk, 2004). Dehing Patkai was the perfect place for this study. It not only had a mix of agriculture, villages and forests, it was filled with owls. So, I based myself at a small town called Joypur near the sanctuary and got to work.

There was just one problem. It’s not easy to find owls. These birds are so well camouflaged that spotting them is very difficult even during the day, and especially in the dense rainforest. The best time to find them is in the night when they are active and vocal. Owls call to attract mates and defend their territories (Appleby et al., 1999), and breeding pairs often duet to defend their territories from others. So, when owls hear the call of an intruder, they respond. I became that intruder using call playbacks (Johnson et al., 1981). This is a technique where we play a recording of the call of a bird species for a small duration and then wait for its real-life counterpart to respond. The tricky part was doing this at night.

I was lucky to find two brave assistants who agreed to work with me, because going into Dehing Patkai at night entails many risks; from losing the trail to encountering elephants, poachers and even extremists. We needed to have our senses on high alert at all times if we wanted to do this. 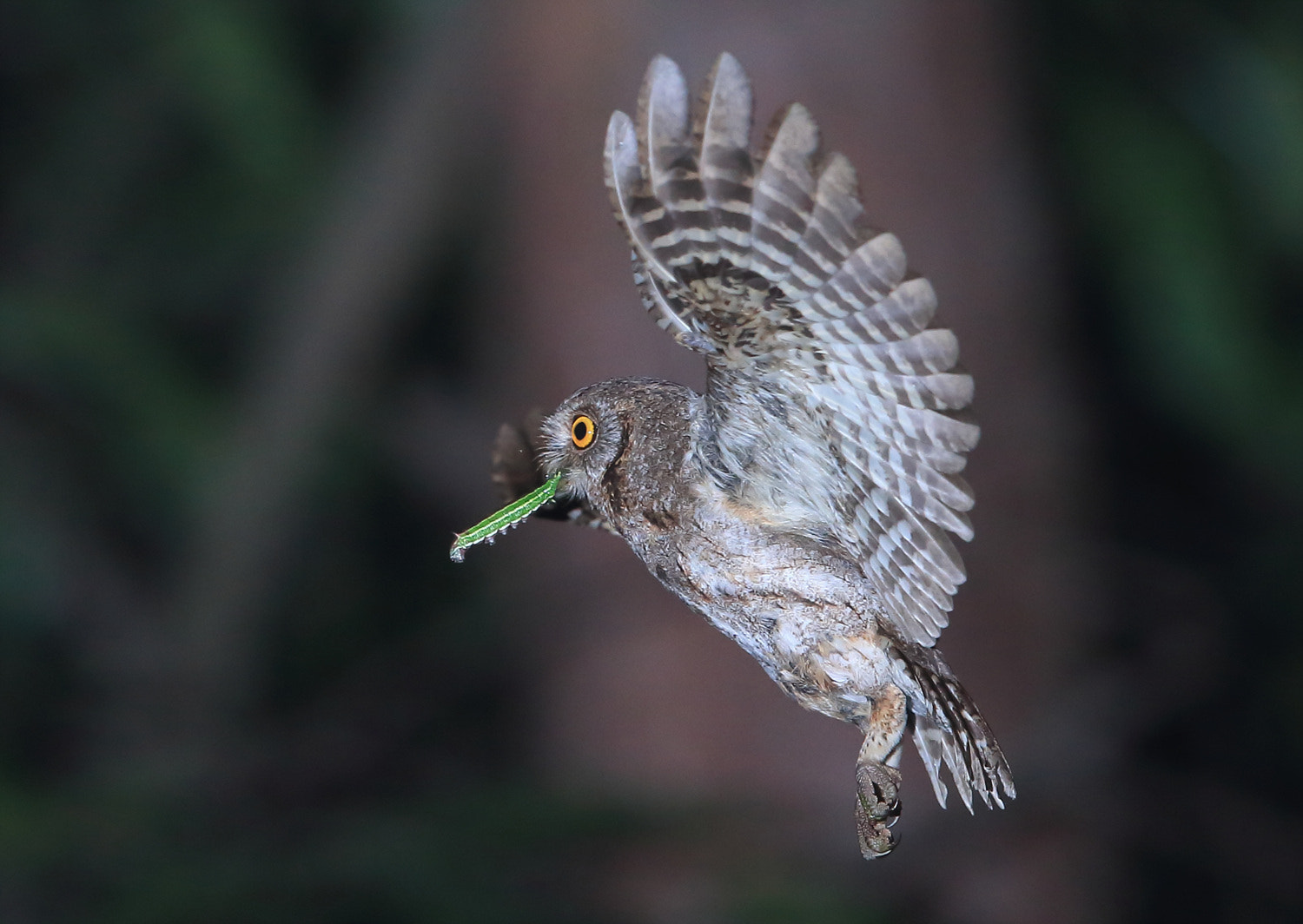 On our first night of work, we walked up to our very first study location with bright torches and a speaker. But even our strong torches could provide visibility for just about three to five metres. After checking that there were no elephants around, we began our session. We turned off our torches and started playing the calls. We were working with the calls of six species. We would play the call of one and note down any response from that species, then play another species and so on.

As we were waiting, a loud eerie sound resonated through the forest. It was our first owl responding! And it wasn’t just any owl; it was the rare and elusive Oriental Bay Owl Phodilus badius. Many birders come looking for this species but leave disappointed. Yet here it was, calling on our very first working night. This owl has a very strange habit; it always perches on vertically slanting branches. Being one of the only two Bay Owls in India, this was a prized find. Over the course of the night, we also heard the questioning hoot of the Collared Scops Owl (Otus lettia), the recurring call of the smaller Oriental Scops Owl (Otus sunia) and the deep call of the Brown Wood Owl (Strix ocellata). We couldn't believe our luck. 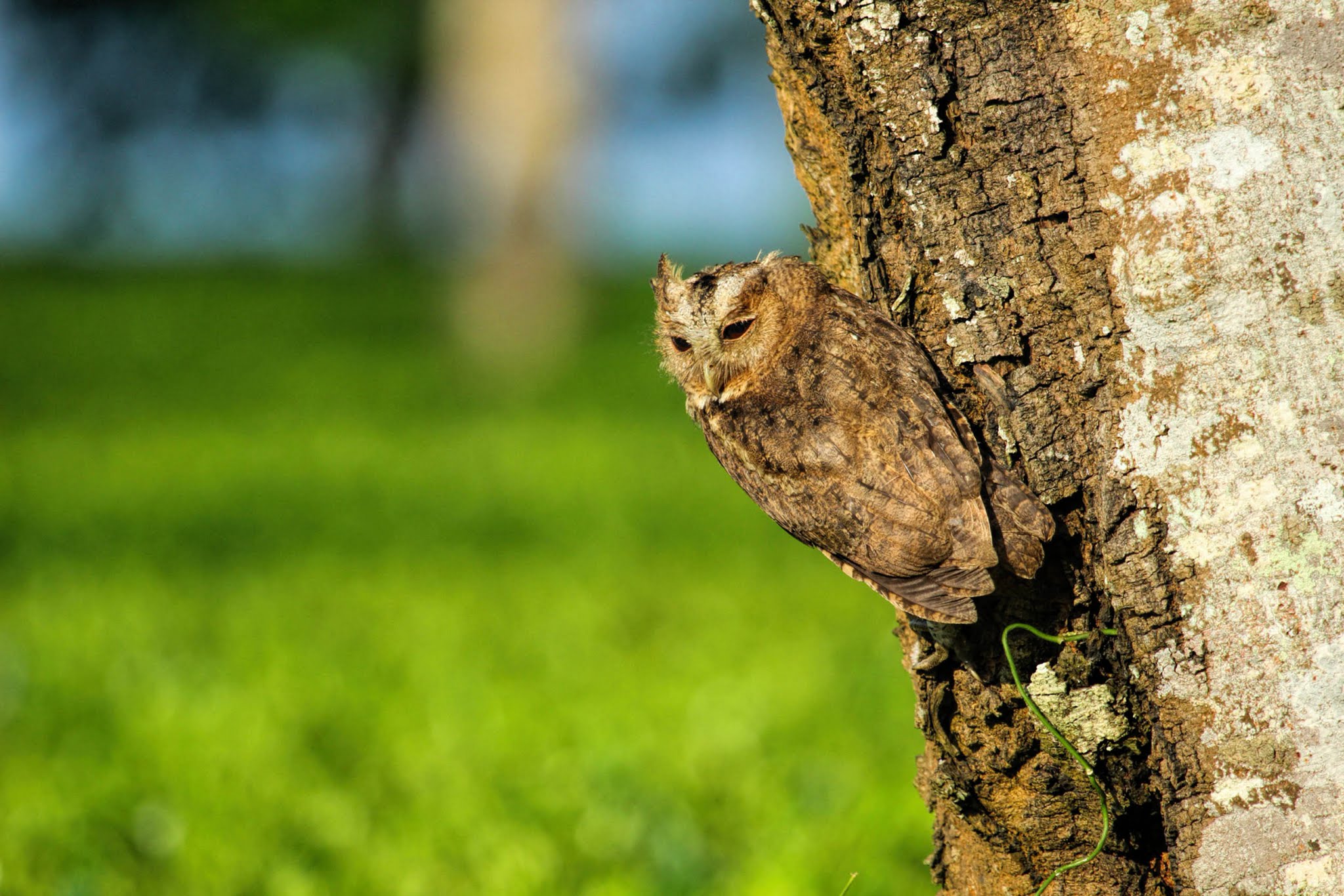 By February 2020, we got the hang of working inside forests at night. We started to go farther from our base at the hilly forests of Joypur into the flatter forests of Digboi. February also marks the beginning of the breeding season for owls.  This is when a virtual orchestra of owls started. We were encountering many more owls than before, and at one point heard 12 owls belonging to four different species calling simultaneously! These four species, the Asian Barred Owlet, Oriental Scops Owl, Collared Scops Owl and Brown Hawk Owl were the ones we encountered most often. Back in Joypur, the Mountain Scops Owl Otus spilocephalus and the Collared Owlet Glaucidium brodiei, the smallest owl in India, had also started calling. Before February, we had not heard them at all. Finding the Mountain Scops Owl was a pleasant surprise. This species is more common in higher elevations and finding it here in lowland forests was unexpected. Its two-noted whistle is unmistakable in the forests but seeing it is still very difficult. 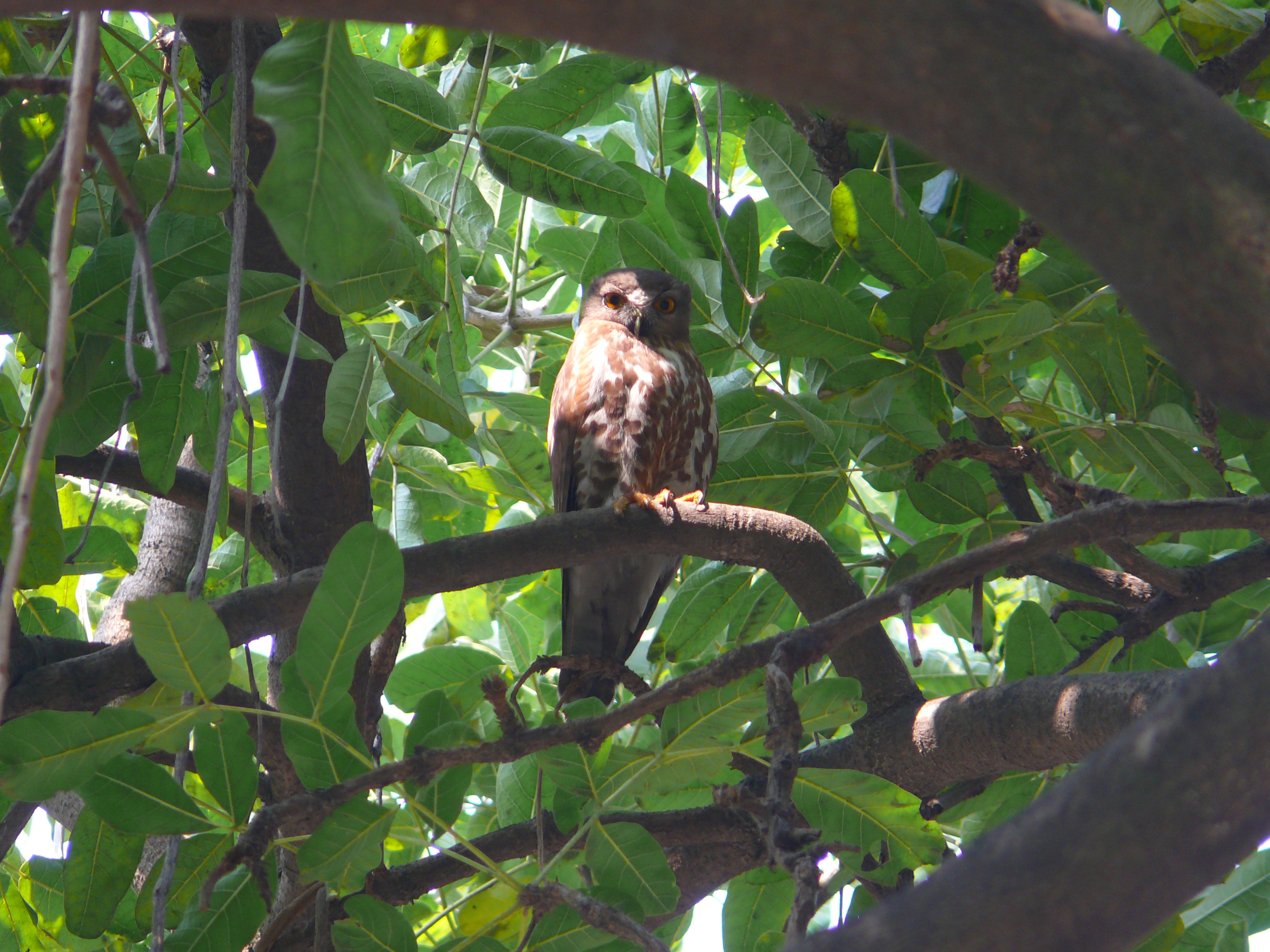 I also saw many owls right in the village. In fact, the first owl I saw here was in the village. It was an Asian Barred Owlet Glaucidium cuculoides. Active both during the day and twilight, this owl is one of the most common ones in the North East. At night, a Brown Hawk Owl Ninox scutulata would regularly visit a particular tree and call from there. The Brown Hawk Owl's call is a pleasant cooing that can be heard throughout the night. In some villages though, the other call of the Brown Hawk Owl "neyo" is considered a bad omen. My assistants would also tell me that an owl called "Hudu" steals fish from their ponds. I found out that Hudu was the Brown Fish Owl, when one night we saw a pair of them, and heard them call "Hudooo".

By the end of February, we had heard most of the owls we were expecting, but one had not responded to our calls so far. Locally called "Daini", which means ghost or witch, the Spot-bellied Eagle Owl Bubo nipalensis is infamous for its call that sounds like the scream of a woman. It is also the largest owl found in India. I heard stories of the Spot-bellied Eagle Owl's call, about how scary it was and the myths associated with it. I wanted to experience it and test my nerves. Finally, during the first week of March it responded to our call, leaving us with shivers and smiles.

We had detected 11 species and more than 340 individuals of owls, when my work came to a premature stop because of the COVID -19 outbreak.

Even as I was locked down at my field base, I could still hear and see owls from my terrace. A pair of Brown Hawk Owls and an Asian Barred Owlet frequented a Ficus religiosa tree beside the base. A pair of Spotted Owlets Athene brama would call every evening. Once I witnessed a Brown Hawk Owl catch a bat in mid-air, go back to the perch and eat it like a parakeet grasps and eats fruit. The Asian Barred Owlet despite its attempt to stay still and hidden during the day often used to get mobbed by other birds on the Ficus. 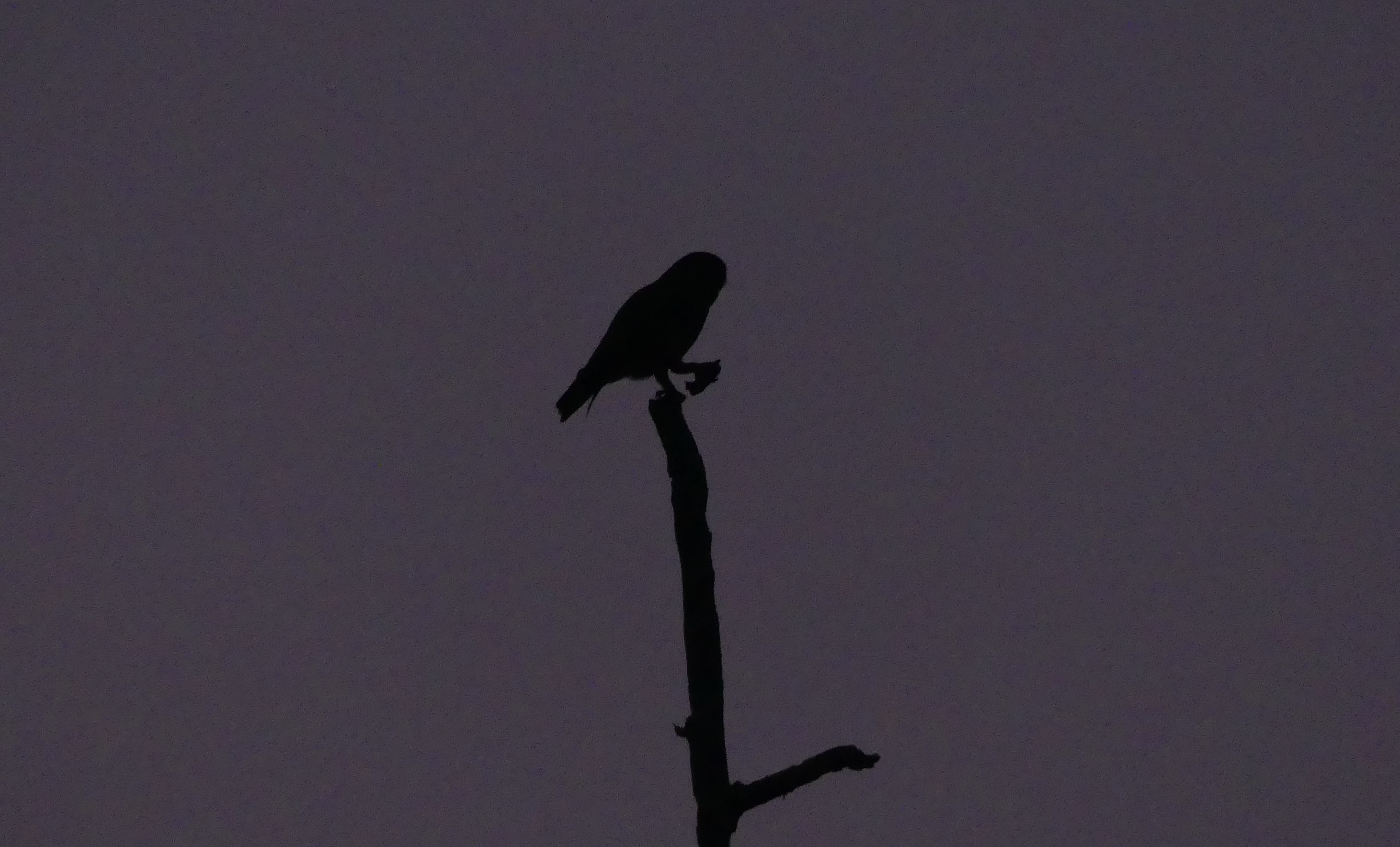 Brown Hawk Owl with a bat caught in its talons. Photo by: Kaushik Sarkar.

Even though I was confined to my base camp, these owls gave me company. But the lockdown brought with it bad news including the clearance of various infrastructure projects in protected areas. To my shock, a coal mine in the Dehing landscape was one of them.

I was furious. During this dissertation fieldwork, I had found that these forests already suffered from various threats. The understaffed forest department struggled to deal with illegal logging and poaching in this vast landscape. A mining project could destroy the last lowland rainforests of India. I had barely scratched the surface of Dehing Patkai’s mysteries. Who knows how many more species we can find deep inside these forests. If just the edges of the forest support such high numbers of owls, imagine what the entire landscape supports. I hope that Dehing Patkai can stay as such: a place where owls thrive.

Clause Konig and Friedhelm Weick: Owls of the World

The author applied for and received ethical clearance from NCBS and NCF to use call playback for his research. Sanctuary discourages the use of call playback for any purpose other than wildlife and conservation research. Further, we encourage all wildlife photographers to abide by these guidelines drafted by our friends at Conservation India.