A marine biologist and conservationist, Trisha Gupta writes about the need to change our approach while studying threatened species such as elasmobranchs and develop a greater understanding about their conservation. 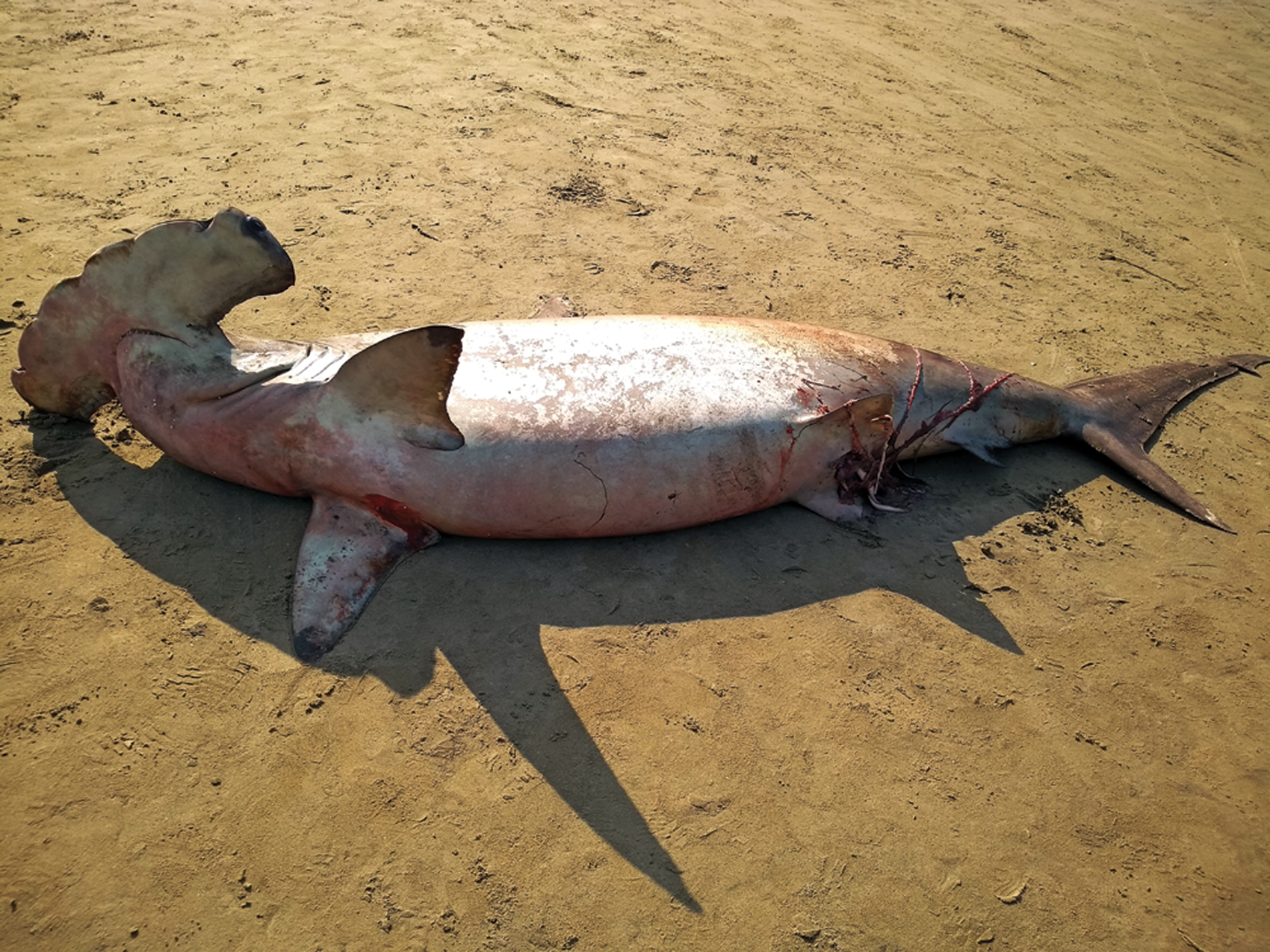 A pregnant scalloped hammerhead shark Sphyrna lewini caught in Maharashtra. Sharks belong to the subclass elasmobranchs, an ancient species group the author has been researching since 2018. Photo: Trisha Gupta.

A guitarfish lies on the beach next to a fishing boat, as fishermen continue to sort the catch from their net into baskets. The early morning sun lights up its reddish-brown body as its gills gently expand and contract, attempting to respire. Guitarfish can survive for a few hours outside of water. “We call this fish ellaro in Konkani,” a fisherman tells me as I crouch down to photograph it. The fishers operate a traditional gillnet boat, commonly found across Goa. “We used to catch many of these fish earlier. But now we rarely get them.”

Guitarfish are one of the species that I am studying for my Ph.D. They belong to a group of fish called ‘elasmobranchs’ – a group that also includes sharks. Elasmobranchs are an ancient species group, with sharks having first evolved between 400-450 million years ago. This is significantly before humans first evolved; in fact, this is even before trees first appeared on land. Given their ancient heritage, it’s saddening to see that elasmobranchs today are one of the most threatened species groups in the world. Recent assessments have found that more than one-third of elasmobranch species are at risk of extinction.

I have been conducting research on elasmobranchs since 2018. Despite a degree in marine biology, I knew very little about these species until a chance encounter at a fishing centre in Maharashtra. A large scalloped hammerhead shark had been caught in a fishing net, and brought back to the beach for sale. The shark was pregnant, with several babies in her belly. (Another unique characteristic of elasmobranchs – many species give birth to live young, rather than lay eggs!). The shark was auctioned off and sold to the highest bidder for a large amount of money. This incident taught me several things: that sharks are commonly fished in India; that it’s completely legal to catch most shark species; that most shark and elasmobranch species are under threat due to overfishing; and finally, that despite their threatened status, sharks can provide a significant income to fishers, and are eaten by several communities. 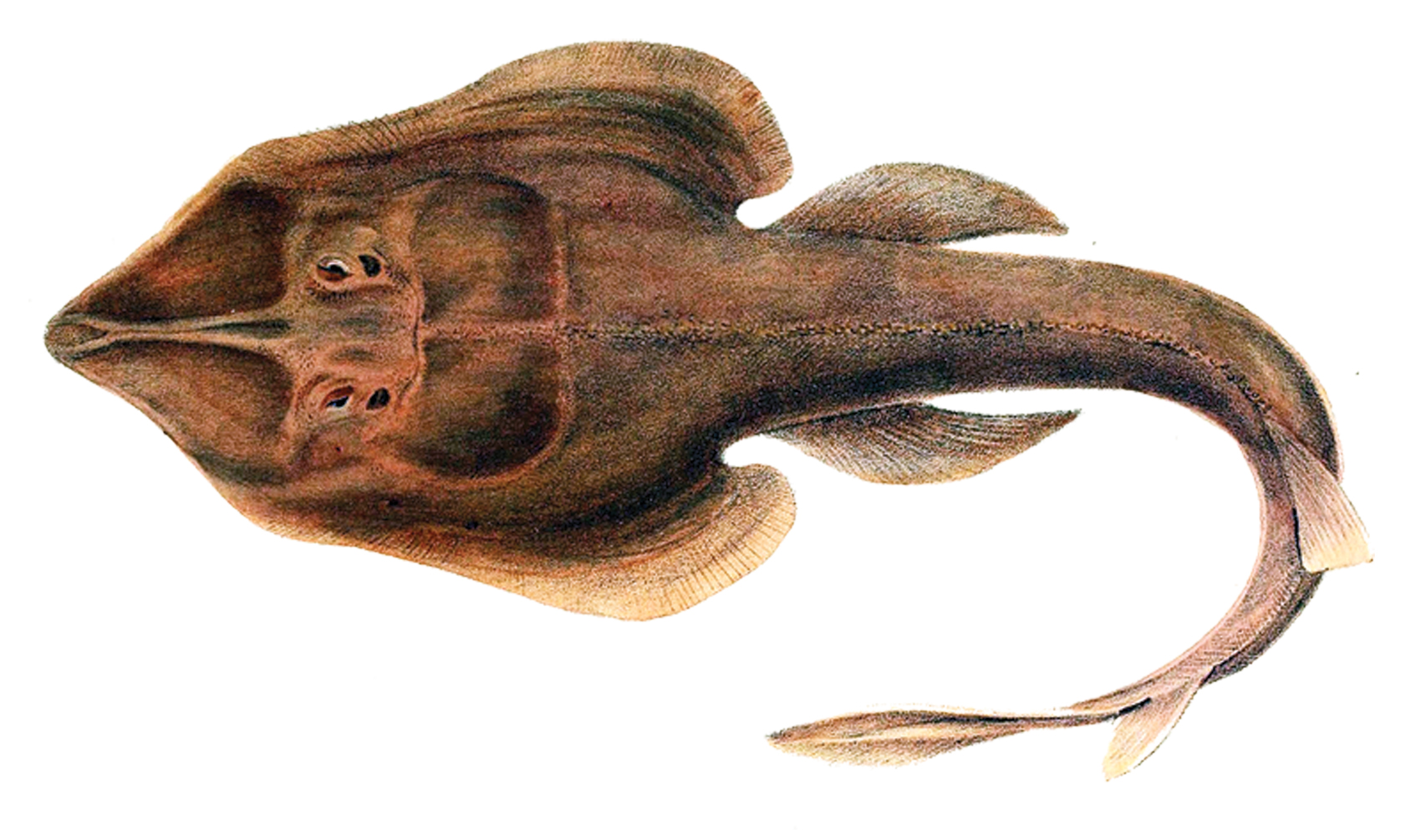 Trawling through the literature

As I began studying elasmobranchs, it became increasingly clear that I couldn’t just look at them as threatened wildlife in need of conservation, or as a natural resource to be harvested. Through my Ph.D., I aim to better understand the drivers of elasmobranch fishing and holistic solutions for their sustainability.

I started by reviewing current literature on elasmobranchs in India. This involved trawling through various online databases to find nearly 500 different publications on elasmobranchs in the country. Having such a large body of research is a really positive sign. However, as my collaborators and I read through the literature, we found that most of it had little direct relevance to the conservation of these threatened species. For example, we found very limited literature on the social and economic aspects of elasmobranchs, which is alarming as there are millions of people involved in fisheries in India.

These sharks (Carcharhinus sp.) brought from Karnataka to the Madgaon wholesale market, will be sold to the highest bidder. Sharks are commonly fished in India and are under threat on account of overfishing. Photo: Trisha Gupta.

We also found some biases in the literature, which can be expected. Well-known species such as the whale shark (the largest shark species, a filter feeder that is often referred to as the ‘gentle giant’ of the sea) have been the centre of research and conservation efforts. Limited attention has been given to elasmobranchs like guitarfish and stingrays. We need to change our approach to studying elasmobranchs and other such threatened species, focusing more on aspects that can play a direct role in their conservation and management. 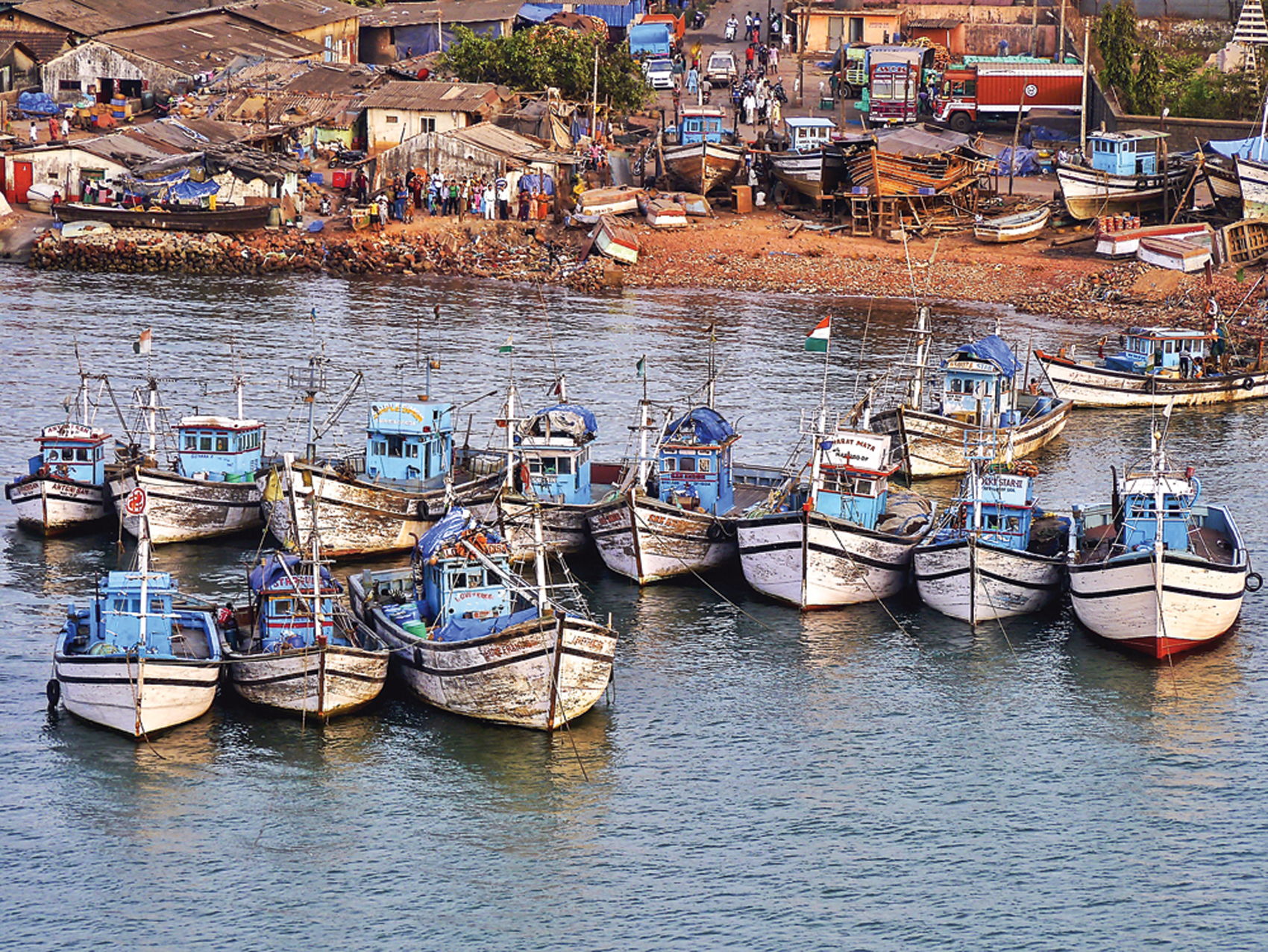 Fishing boats ready to launch at sea at a port in Goa. This coastal state is responsible for almost two per cent of the country’s marine fish production. Photo: Public Domain/Cycling Man.

My team and I spent months traversing Goa’s coast to study the enigmatic guitarfish. What drew me to this species and region is that guitarfish can be found in extremely shallow waters on the coast; if you’re lucky, you can even see them as you’re walking on the beach. Guitarfish are also particularly threatened; all six species (family Glaucostegidae) are listed as Critically Endangered, and as my literature review found, they are poorly studied in India. In Goa, they face additional pressures from tourism-related activities, in addition to fisheries.

Equipped with a pen, questionnaire sheets and laminated photos of guitarfish, we visited over 25 different beaches and jetties across Goa’s 105-km.-long coastline to speak with fishers. Some of these were popular tourist destinations, others were serene and secluded beaches. Finding and exploring the latter were some of my favourite memories of fieldwork. After an initial wariness, fishers were usually happy to share their insights on this strange-looking fish. We were interested to learn about the habitats and seasonal patterns of guitarfish, as well as about how fishers capture, use and interact with them.

The wholesale fish market in Madgaon, Goa. For fish workers in the state, a working day starts as early as 2:30 a.m. Photo: Trisha Gupta.

Alongside this, we also visited fish markets to understand where the elasmobranchs would go after they were captured. The wholesale fish market in Madgaon could be the definition of ‘organised chaos’. Fish trade here starts as early as 2:30 a.m.; the market starts filling up with trucks carrying fish not only from Goa but from across the country. You can see blacktip sharks from Karnataka beside crates of prawns from Gujarat. People move haphazardly across the lines of trucks, buying or selling fish, under the bright lights of the market. Melted ice water from the crates of fish form puddles on the ground. The market forms a sharp contrast to the sunny sand and crashing waves of the beach – but it was interesting to map out the movement of guitarfish, sharks and different elasmobranch species.

When possible, we would spend the evening surveying the beach, at the edge of the waterline, to try and spot guitarfish. Sightings were rare, these threatened species being extremely elusive, but the few times we did spot them in the waves were incredibly exciting! 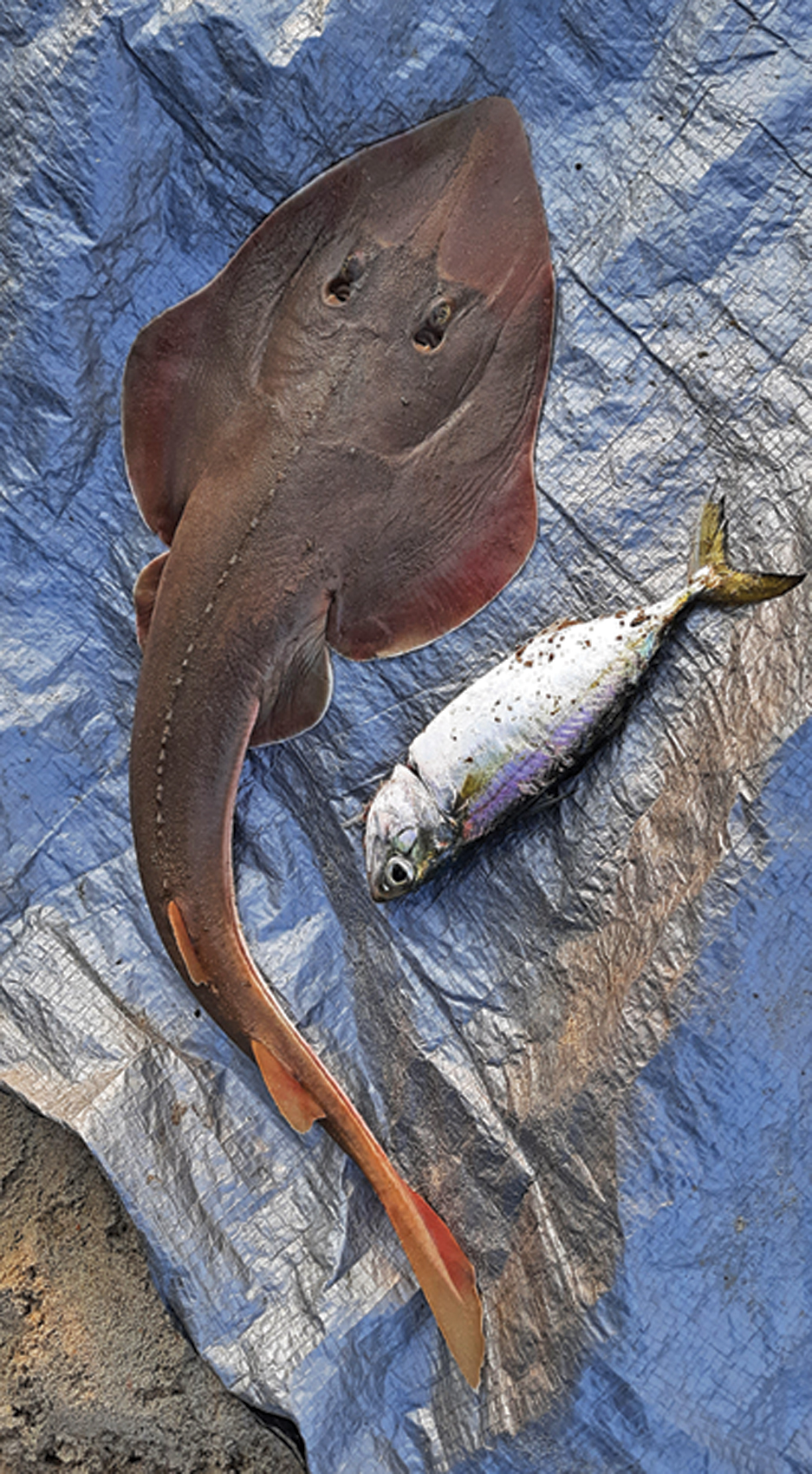 A hope for conservation

Our initial findings show that coastal communities in Goa don’t really rely on guitarfish as a source of income or food. In fact, most people we interviewed have been positive about guitarfish conservation, as it would have little impact on their livelihoods. The challenge here is that these species are incidentally captured (as ‘bycatch’), so it’s not as though fishers choose to catch it, or can choose to avoid it. Here’s where the ecology of guitarfish can play a role – its ability to survive outside water after being captured, along with knowledge of its habitat and seasonality that we gained from the fishers, can be used to develop and implement locally appropriate conservation measures. It will be a long road to conserve these Critically Endangered species on the ground, not to mention the challenge of conserving other, more economically valuable elasmobranchs. But I hope that this is a good start.

Elasmobranch species for sale at the fish market in Mapusa. While well-known species like the whale shark (the largest shark species) have been the centre of research and conservation efforts, limited attention has been given to elasmobranchs like guitarfish and stingrays. Photo: Trisha Gupta.

Author’s Note:
My Ph.D. is being generously supported by the Levine Family Foundation. My collaborators, Shruthi Kottillil, Sudha Kottillil, Andrew Dias and Harsha Gaonkar, and my supervisors E.J. Milner Gulland and Divya Karnad, all played a vital role in this research.