Discarded fishing nets, technically known as ghost nets, make up a large part of marine debris because they are made of non-biodegradable material. Marine wildlife can get entangled, permanently injured, amputated, and even starve and die because of these nets. Akansha Tiwari writes about this vital conservation issue, and her efforts to highlight it through her film project Tangled Seas.

On an evening stroll along one of North Goa’s picturesque beaches, walking bare feet, I see the tide take back a crab entangled in a fishing net. A beach commonly used by local fishermen, nets were commonly seen here. But should they be? Fishing nets are made of non-biodegradable, nylon-like material and are quite indestructible as they are meant to last for years and be an effective tool for yielding a good catch.

Releasing the crab from the net, I tried to imagine the journey this tiny piece of ghost net, as such discarded fishing nets are called, had made through the sea. 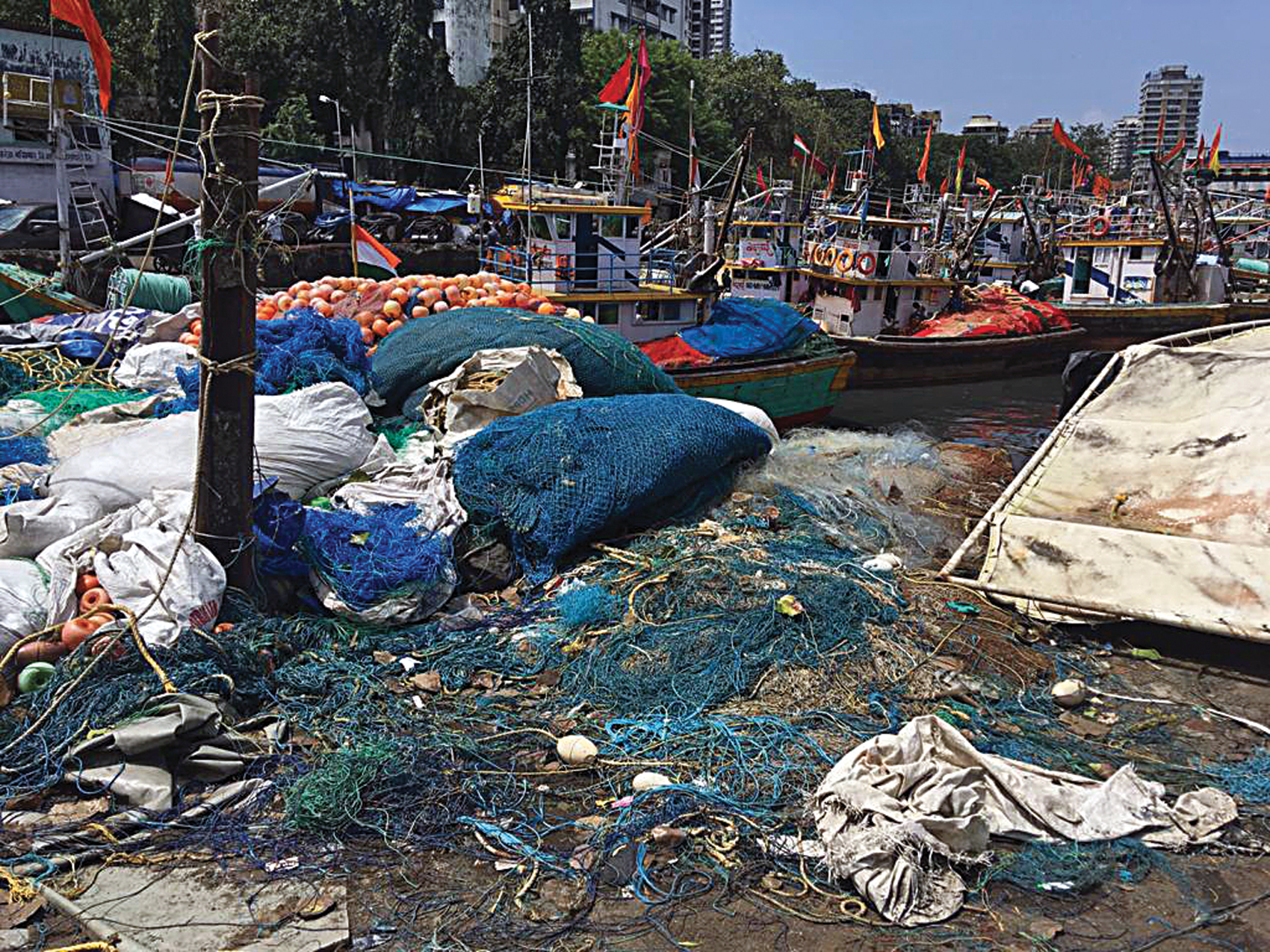 A pile of discarded ghost nets at Sassoon Docks, Mumbai. Silent killers of the sea, they can survive in the ocean for up to 600 years and harm marine wildlife and the ecosystem.

I remembered this incident at a conference I attended in Goa in April 2019 to discuss possible solutions and methods to minimise overconsumption. A local sarpanch suggested that I work with divers to document the garbage nuisance of discarded fishing nets since there was little awareness or documentation about them. We realised there were no stories on ghost nets in India. It was then that we understood the urgency to put out this story. Further research brought us face to face with the impact of nets on marine ecosystems – and that is how Tangled Seas was born.

Tangled Seas is one of India’s first films to address the conservation issue of ghost nets – broken or whole fishing nets purposely or accidentally discarded or lost at sea.

THE IMPACT OF GHOST NETS

Apart from entanglement and starvation, ghost nets can cause permanent injuries to marine wildlife such as turtles, whale sharks, whales, pelagic birds, crustaceans as well as human beings such as divers. They can survive in the ocean for up to 600 years and continue to harm marine wildlife and ecosystems (coral reefs) to the extent that their populations cannot recover easily.

Around 46 per cent of the Great Pacific Garbage Patch consists of ghost nets. The statistics in India have been a little challenging to gather and maintain in comparison because of the variety of currents and tropical nature of our seas. Marine debris by itself has monumental consequences on marine wildlife and ecosystems, and ghost nets are just an addition. 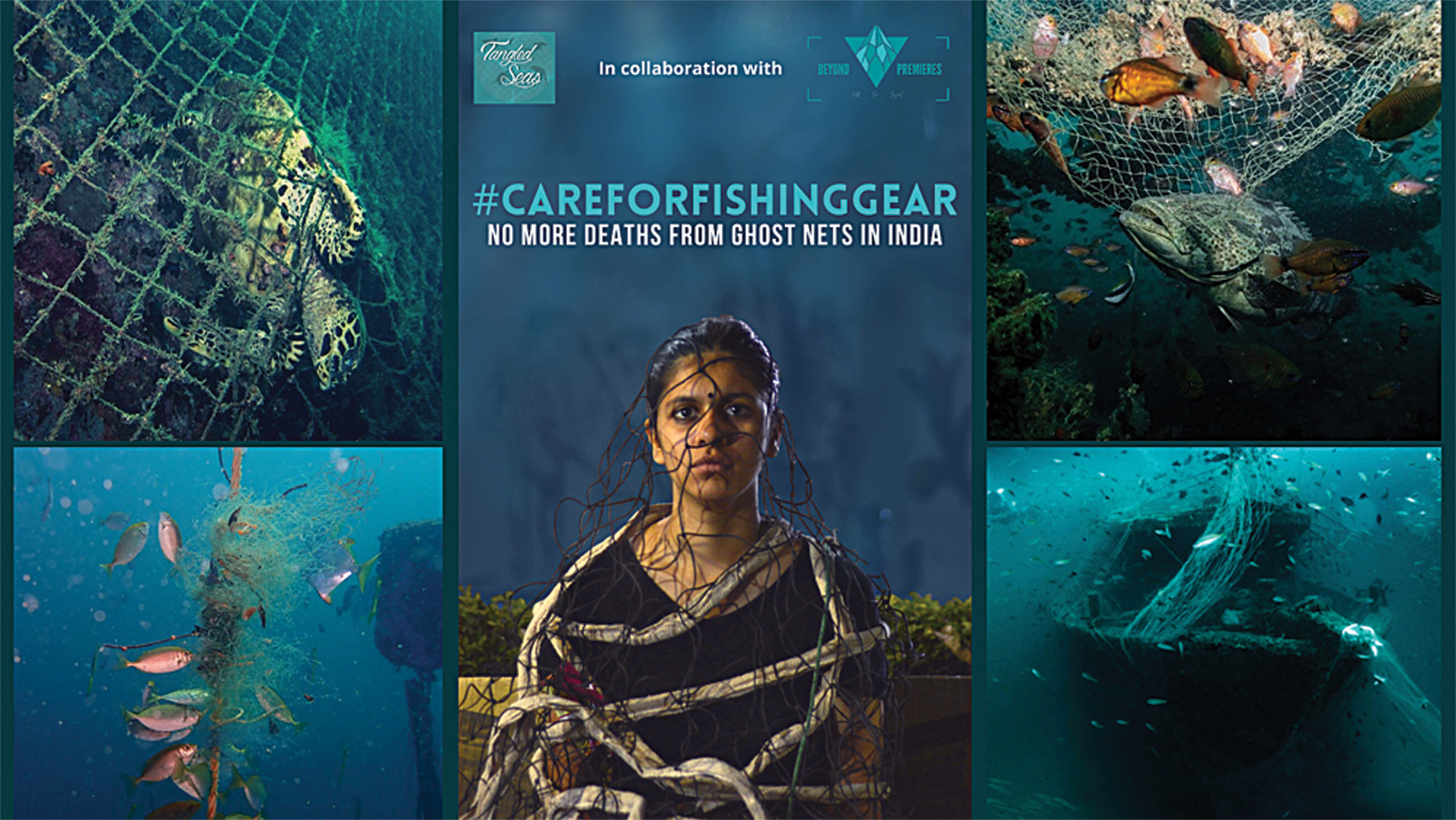 The ‘No More Deaths from Ghost Nets’ in India campaign proposes recommendations for reducing deaths from ghost nets in the country. Model: Tanisha Kale.

Tragically, ocean ecosystems are not as widely discussed in India. This shortcoming was reflected in the public’s understanding of the severity of this issue at the start of our journey. Being a crowdfunded film, we faced the initial hurdle of making this story relatable to everyone, including those that weren’t connected to fisheries, didn’t consume seafood or those that didn’t live close to the sea.

A lot of the time and effort went into outreach and awareness campaigns, from workshops and meetups to online events during the pandemic. Every individual supporting the film in the form of funds or crew members had to be sensitised about this lesser-known conservation issue. Almost three years later, there is still a long way to go.

Conservation centric films in the wildlife sector often have an Impact Campaign associated with them. These campaigns ensure that the issue addressed by the film doesn’t stop with the film itself. Indian filmmakers have only recently started catching up to this concept, while internationally, this has been practiced often.

As a part of Tangled Sea’s impact campaign, we carried out initiatives such as #BanTheButt taking inspiration and permission from the Swedish #ChalkofShame. The #BanTheButt campaign highlighted the harm caused by discarded cigarette butts, another major contributor to marine debris along with fishing nets, toothbrushes, straws and footwear. We also organised several sessions at schools and colleges, where we discussed the various kinds of fishing nets, their environmetal impact, ways to help and the future of this issue in the conservation landscape.

Beyond Premieres
Beyond Premieres helps filmmakers create a tangible impact with their art. Co-founded by award-winning wildlife filmmaker and National Geographic Explorer, Gunjan Menon and her husband Saiyam Wakchaure, it hopes to build bridges between filmmakers and organisations working on the conservation frontline, and harness the power of filmmaking to create a wave of change.
“As impact-driven filmmakers ourselves, we noticed a gap between emerging filmmakers hoping to create a significant impact and those working at the grassroots level. Similarly, conservationists in the field often require help from filmmakers who are skilled science communicators to amplify their work. We refer to various case studies, use our network and, based on our own industry experience, help people collaborate. It’s a bit like conservation matchmaking!” says Gunjan.
Beyond Premieres also supports filmmakers to strategise a multi-pronged, ground-level campaign that helps embed impact in the DNA of a film project through outreach, education, capacity building, artist collaborations, legal and policy change advice. There is no time like now to come together as powerful filmmakers and make more than just films – go one step ‘Beyond Premieres’. 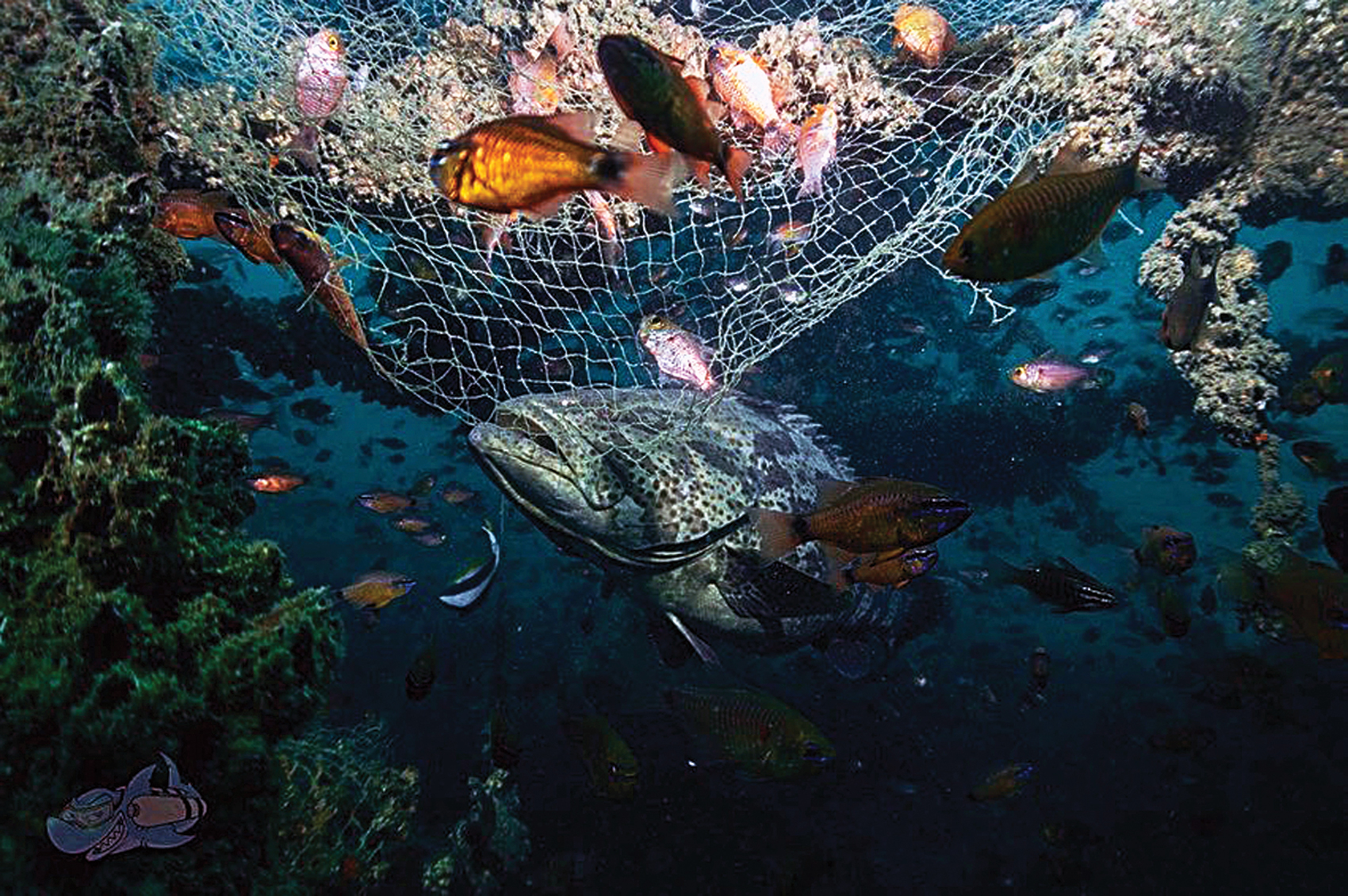 A grouper near a ghost net at Temple Reef, Pondicherry. Ghost nets can cause amputation, starvation, entanglement and permanent injuries to marine wildlife.

As a part of its impact campaign, Tangled Seas in association with Beyond Premieres (see box) proposed a petition to the Chief Minister of Maharashtra with recommendations on ways to reduce ghost nets in the ocean and coastal areas while also helping fishing communities and divers (since they have the most access to ghost nets in the sea). It was drafted under the guidance of policy experts and environmental lawyers in consultation with those affected by the issue.

The petition suggests a shelter to store currently used fishing nets to reduce wear and tear; to direct state funds to divers; to have a National Ghost Net Day for creating awareness and organise statewide underwater and coastal clean ups; to direct state funds for research towards sustainable net material and organising sensitisation and awareness campaigns for fishing communities.

Tangled Seas has also created an open-source ‘Indian Ocean Ghost net repository’ accessible through its website where you can ‘report a ghost net’ if you come across one on land or underwater. This repository can be used to understand the kind of nets found in a region, carry out research, recommendations for policy change, as well as provide a database, which can be further used for collecting and repurposing these ghost nets.