Text and photographs by Sankar Nagarajan.

On the Puffin Trail

I booked a boat from North Berwick on a lovely summer afternoon, excited to photograph them. On my way there, I met a gang of old men who recommended walking along a street parallel to the water’s edge to enjoy the view of Bass Rock. Since the Scottish Sea Bird Centre is only a kilometre from the railway station, I decided to walk there. Along the beach road, I soon came upon the magnificent Bass Rock. I could not resist taking a photo of the view!

At the Scottish Seabird Centre, I went to a cafeÌ and sat outdoors on a bench facing the Bass Rock, wanting to look at it some more. Although there are many places to see it along North Berwick’s shoreline, this was probably the best place to get an epic photograph of it with the lighthouse in the frame. After some time, visitors were asked to gather in the harbour, where a guide informed us that the trip had been cancelled on account of bad weather that day. However, they gave us the option to reschedule it and also offered us a tour of Bass Rock. Already fascinated by the views, I jumped at the opportunity to visit. 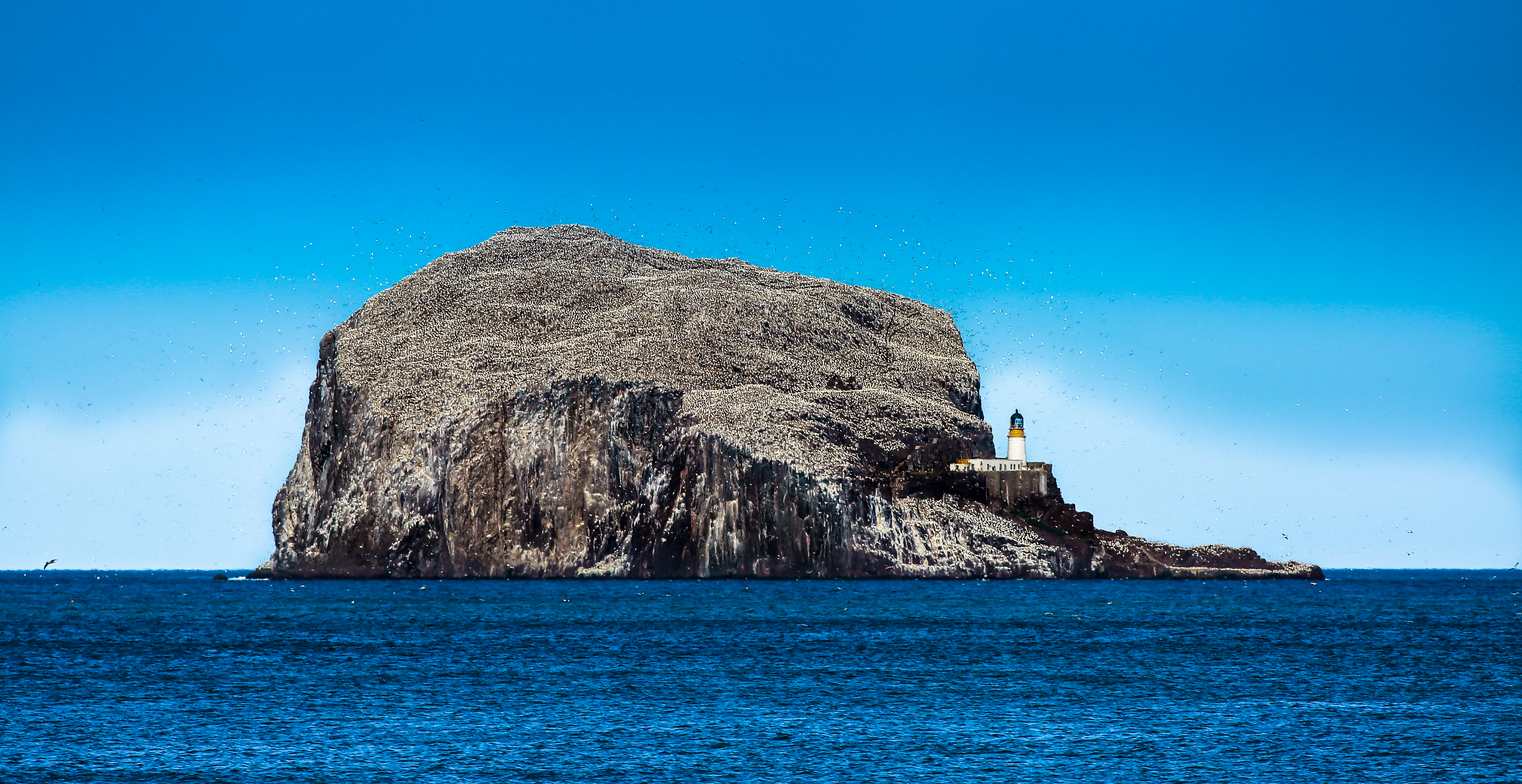 Before beginning the tour. we were given special suits to protect us from cold water splashing onto us as well as hoodies to shield us from dead fish and seaweed dropped by the gannets. In the boat on the way to Bass Rock, the skipper explained to us that this 91-m. high rock in the North Sea is home to the world’s largest colony of Northern Gannets.

Over the years, the island has been traded and owned by many individuals. Today, only a lighthouse and an ancient castle survive at its southern cliff. The land is now inhabited by gannets and has become a bird sanctuary, where roughly 1,50,000 of them spend their summer.

As we moved closer to Bass Rock, we were surprised at its size. There were gannets everywhere! Once the engine had been shut off, the boat floated freely, giving us a great opportunity to photograph the majestic seabirds.

At first glance, they look similar to the common gulls seen on city streets. But they are distinguished by their bright yellow crowns and long white necks. Their sharp, black-margined beaks and blue circled eyes give them a majestic air. Northern Gannets do plunge dives to catch fish around Bass Rock, just like their African siblings. Before hitting the water, they fold the wings back, streamlining their bodies in the shape of an arrow. 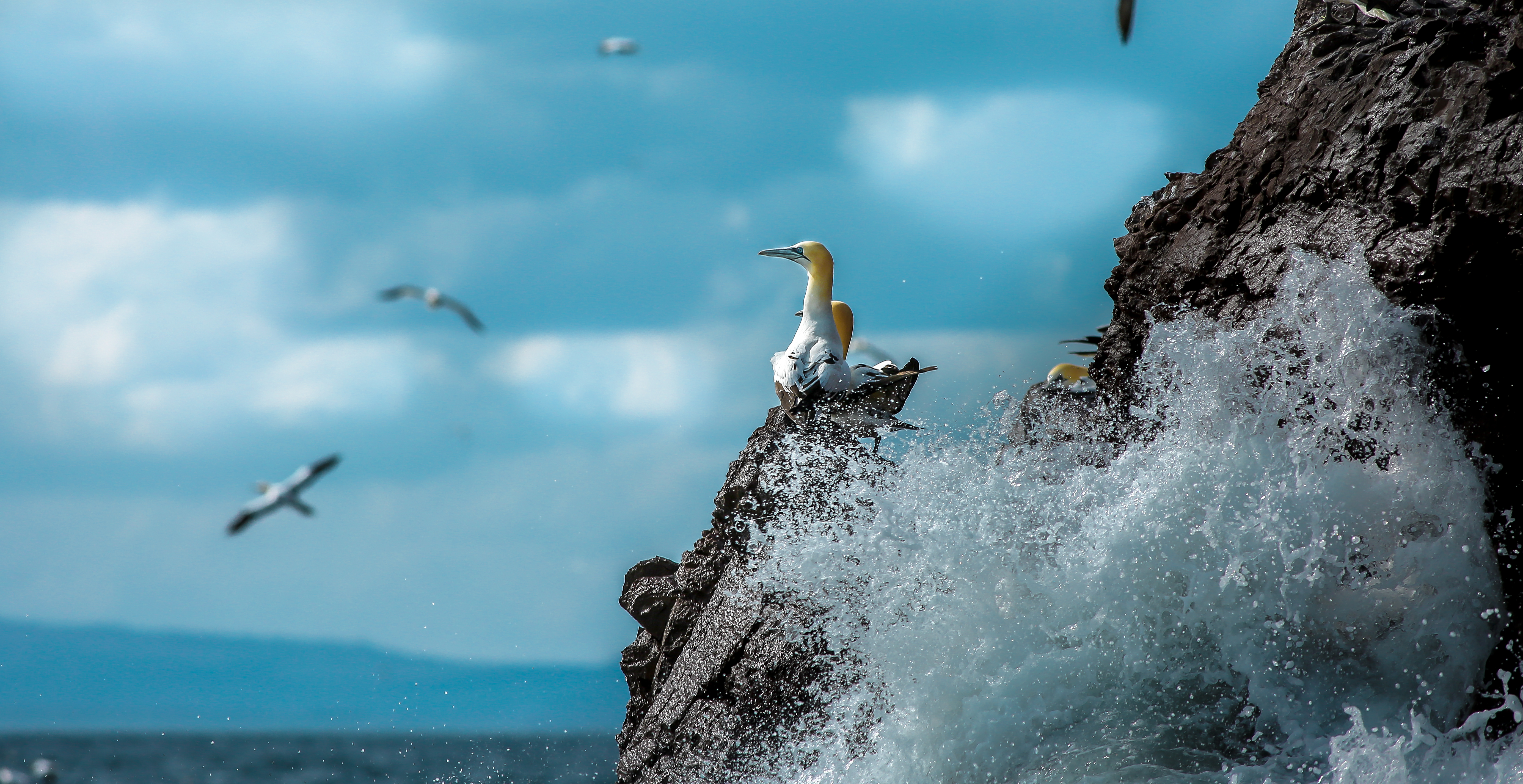 A temporary perch for surveying the seas. Photo: Sankar Nagarajan

Gannets spend most of their time in the open ocean and head to land only when nesting. It was summer when I visited, a time when gannets flock to Bass Rock to build their nests. Nesting gannets can become aggressive toward other birds that attempt to enter their nest. Since they live close to each other, gannets constantly glance up before they fly and circle the area for a while before they land on their nest, creating the impression of a busy airport. Once you set foot on Bass Rock, you see gannet nests virtually across every inch. Near the water level, we saw cliffs and caves filled with gannets drying themselves.

All in all, Bass Rock did not disappoint. We were told that tide and weather conditions may affect access and the Scottish Seabird Centre doesn’t encourage landing on Bass Rock all year round. However, the Seabird Centre has installed several cameras on the island that can be controlled remotely from the mainland. Any visitor to the centre can have a Bass Rock landing experience with their live cameras and via their wildlife movies. They also offer a trail that will take you halfway up, close to the gannet nests!

Those old men in North Berwick were right – Bass Rock is a real treat for birdwatchers and photographers! 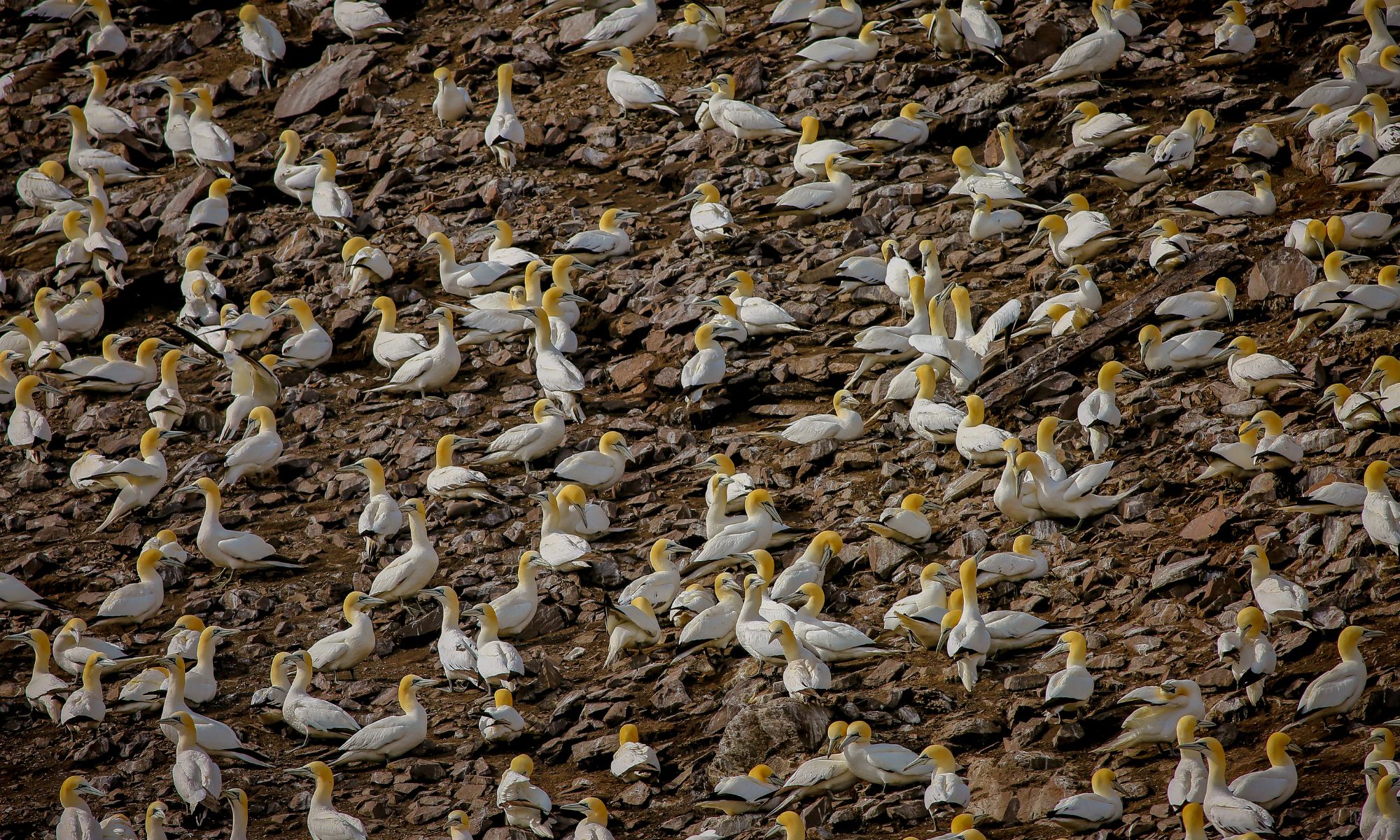 ~ The nearest city to North Berwick is Edinburgh, which is connected by ScotRail.

~ The summer months (May to July) are ideal for visiting these islands.

Sankar Nagarajan lives near the Sathyamangalam Tiger Reserve. His love for wildlife and passion for photography led him to wildlife photography. He always strives to portray nature in a unique way.