It’s been a month since you’ve been gone. Through the years you have been my compass and life-raft. You influenced most of my attitudes to tigers and to nature itself. And now you are no longer around. I tried for a month to write this letter but nothing would flow. It was like a desert inside me had staunched the flood of feelings.

Each day I would think back to the early days, when we would spend quiet time in your slowly-evolving Eden. How you once slept, snoring gently at the wheel of your vehicle, as minutes turned to an hour with the Bakola male showing no sign that he might actually pick himself up and stalk the sambar deer just 50 m. away across the river. Or the time you and I sat in the dark on Gazal Hill, as Mehdi Hasan’s mellow voice cast a spell over us. And, how can I possibly forget that night in the winter of 1980 at Milak Talao when you and Badia lured the tigress with her three sub-adult cubs to within a metre of our almost antique Jeep? It was my late father’s very first tiger sighting and he was beyond speechless. But not as speechless as when the vehicle refused to start and we had to walk back four kilometres with (as far as my Dad was concerned) four tigers hovering around us in the forest shadows. Halfway to Jogi Mahal, I could see my father smile on that moonlit night when you ‘reassured’ him: “Don’t worry Pitaji, Ranthambhore tigers do not like the taste of Bombay people!”

How diametrically opposed you were to today’s senior forest officers. Not only did you sleep every night in the forest you were sworn to protect but hated dealing with paperwork so much that you actually flung a file across your Sawai Madhopur office because your head clerk presented it to you just when you had risen to leave your prison desk for the forest: ”Ab mien tere file sambhalta jaoon, ya tiger bachaoon?” you snapped, as you made good your escape from the red tape that stifled you so. 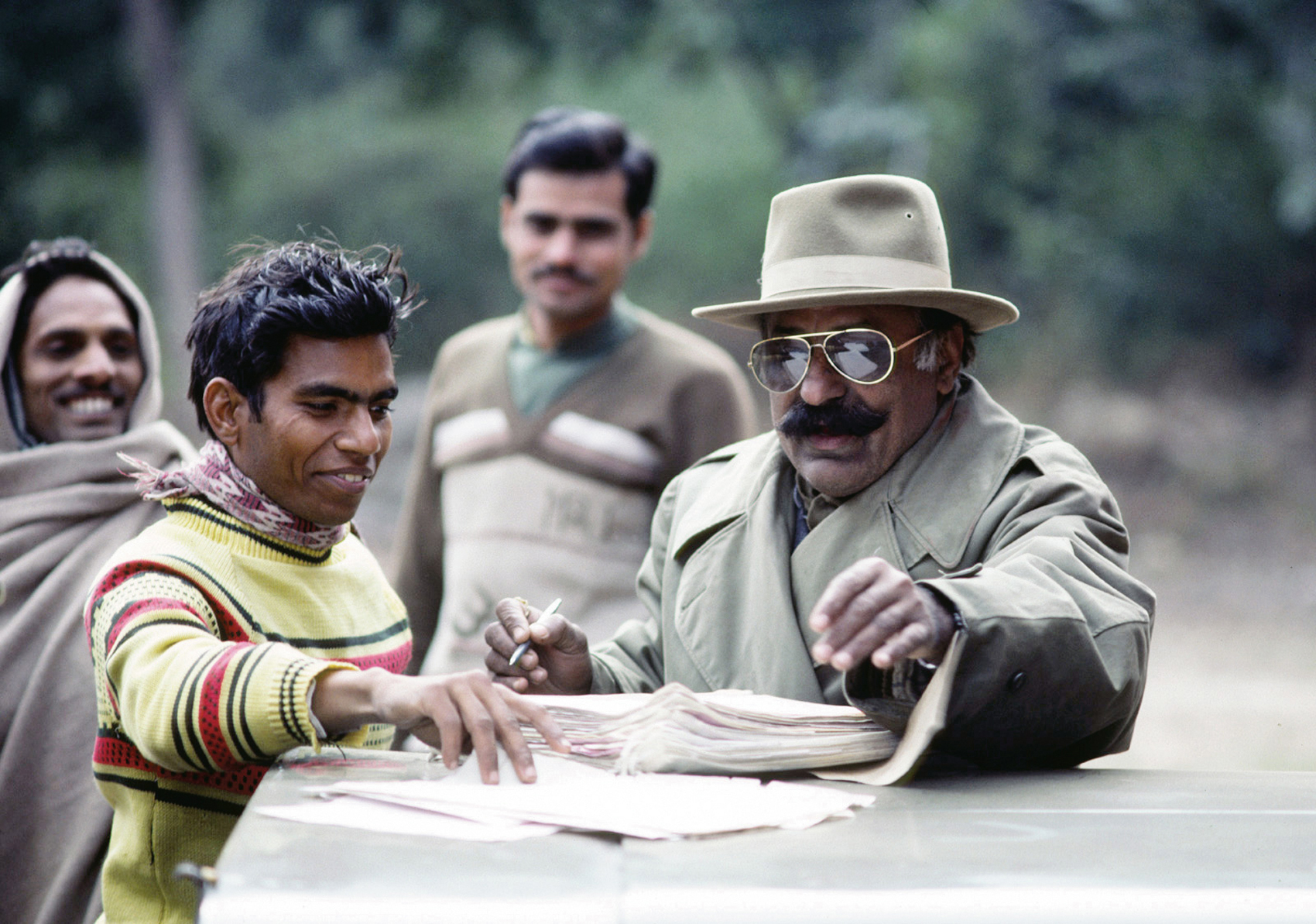 Fateh Singh Rathore was a class apart from today’s senior forest officers. Not only did he sleep every night in the forest he had sworn to protect but hated dealing with paperwork and red tape.

Fateh, we have consumed a lot of whiskey together. Thanks to you I even learned to tolerate that awful Peter Scott that you would drink to the exclusion of all else. The night a leopard picked off a sambar fawn a couple of metres behind Gertrud, Helmut and I, as we sat around your campfire under the famous banyan tree, was one such night. We were too wasted even to follow the blood trail till dawn broke. Before taking off for our usual morning round in the forest, you tracked the spoor to where the rumen lay surgically separated and discarded across the road, 30 m. up the slope at the foot of the towering Ranthambhore fort.

Memories. I could fill a book with them. Madhu and my daughters Miel and Tara who grew up under the Jogi Mahal banyan tree felt they had proprietary rights over you. Even I would feel cheated when, after many days of isolated exclusivity at Jogi Mahal, some guest or other would turn up and ‘Fateh Kaka’ suddenly had to be shared.

And through all these adventures of the wildlife kind, ran the hardcore business of actually protecting tigers, which always took precedence over the light-hearted banter, or the ethereal trips into tiger havens. When we first met, you seldom, if ever, shared your heartbreak when politicians broke promises, poachers slaughtered tigers you watched grow from infancy, or you borrowed money to pay salaries to your key staff because some petty official or other sitting in faraway Jaipur had tossed the necessary financial approvals into government quicksand.

I remember one particularly grating armchair critic castigating you while eating the dinner you had generously served up for him under your banyan tree: “You should be more democratic,” he said as he wagged a disapproving finger at you. “What does it cost you to consult the villagers that live around your park before preventing their cattle from entering the park? Looking straight at me, with more than a hint of amusement on your face, you said: “Bittu theek keh raha he yeh. We should also organise consultations and baithaks with poachers before they kill tigers! And with villagers before they set fire to the forest.” The lecture stopped. 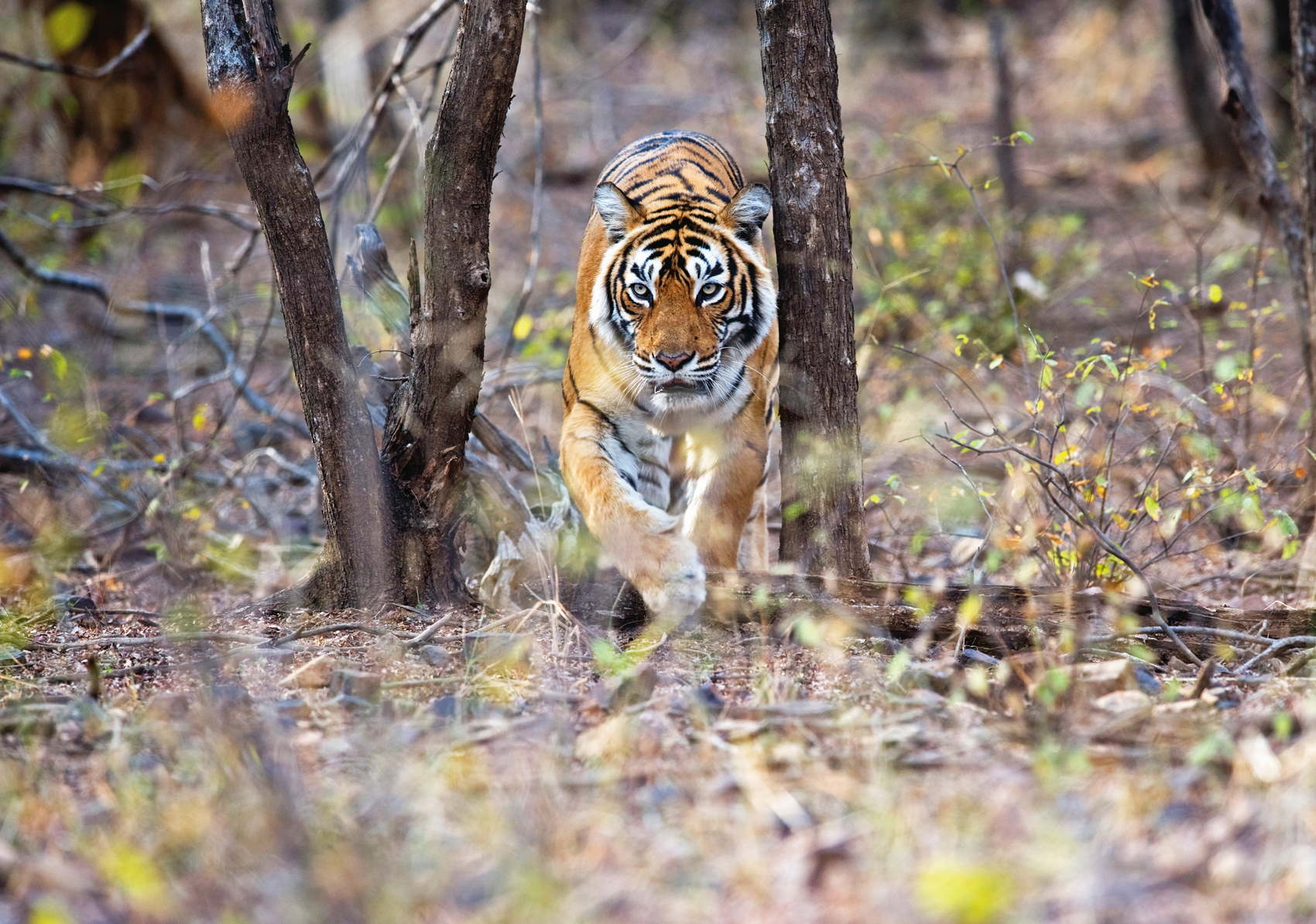 His first commitment was always to protecting tigers, which took precedence over everything else.

By now almost everyone I know, knows the story of how you coerced me into starting Sanctuary magazine in 1981. You had then suggested we call it ‘Habitat’, till one of your many foreign guests broke the news to us over breakfast on the Jogi Mahal terrace that ‘Habitat’ was a furniture chain in Australia! And so… you leaned back in your chair and stage whispered to me: “Sanctuary” and the magazine was christened.

Heaven alone knows how many campfires of yours I have stolen warmth from Fateh. But your last campfire will never be forgotten. It was on March 2, 2011, on your precious Maa Farm, with hundreds of people around. The desert music you loved was playing. But instead of laughter, around me I heard people sobbing, some with their heads in their hands. Others stared motionless into the pyre that consumed you.

But you still live inside us, Fateh. You always will.

FATEH SINGH RATHORE – A TIMELINE
Courtesy: Govardhan Singh Rathore
1938: Fateh Singh Rathore is born in Choradia, a village in the Jodhpur district of Rajasthan, on August 10.
1960: Rathore joins the Rajasthan Forest Service in Ranthambhore, after completing his BA from Rajputana University and a course in Wildlife Management from the Wildlife Institute of India (WII), Dehradun.
1961: One of his first jobs is organising a tiger hunt during a visit by the Queen and the Duke of Edinburgh.
1963 to 1970: Posted at the Mt. Abu Game Reserve.
1971: He is posted back as Game Warden in Ranthambhore.
1973: Helps launch Project Tiger in Ranthambhore. When Rathore arrives in Ranthambhore, just three or four tigers are believed to be left.
1976: Executes the resettlement of 13 villages from inside the tiger reserve. This helps rejuvenate the tiger habitat.
1980: Ranthambhore Sanctuary is declared a national park. Rathore stops the baiting of tigers in Ranthambhore along with night driving. Very soon the tigers of Ranthambhore are seen during the day. This enables detailed documentation of wild tigers for the first time on film.
1981: Rathore is ambushed, beaten unconscious and left for dead while on patrol inside the park by villagers illegally grazing cattle in the reserve.
1982: Indira Gandhi, Late Prime Minister, presents Rathore with the Project Tiger Conservation Award. He is also awarded the Fred M. Packard International Parks Merit Award by the Commission on National Parks and Protected Areas in recognition of outstanding service in furthering the conservation objective of protecting areas given by the Duke of Edinborough.
1983: Awarded an International Valour Award for bravery in the field.
1985-1986: Guides Rajiv Gandhi, Prime Minister of India and his family during their visit to the Ranthambhore National Park for one week.
1987-1990: Sacked as warden and transferred to an office job in Jaipur after remonstrating with a ‘nobleman’ caught shooting wild boar. Posted at different places during this time.
1989: Attends I.U.C.N. World Congress in Rome.
1996: Retires from Chittorgarh.
1998 to 2010: Works as Vice-Chairman of Tiger Watch, an NGO dedicated to protecting the tiger in Ranthambhore.
1999: After his retirement, Rathore is appointed Honorary Wildlife Warden* of Ranthambhore. He is awarded ESSO Award by I.K. Gujral, Former Prime Minister of India for a Lifetime Achievement in Tiger Conservation.
2000: Accompanies President Clinton as a wildlife expert on his visit to the Ranthambhore National Park.
2000: Attends World Conservation Congress in Amman.
2003: Awarded Maharani Marudhar Kanwar Award presented by Maharaja Sawai Bhawani Singhji of Jaipur for ‘Ecological Balancing and Improvement in the Environment’.
2008: Presented with a Sanctuary-RBS Lifetime Achievement Award
2011: Presented with a Lifetime Achievement Award by the World Wide Fund for Nature.
Early 2011: Reappointed as Honorary Wildlife Warden* which allowed him to enter his beloved park one last time.
2011: Passes away on March 1.
join the conversation