Fishers and Felines: Conflict Mitigation in the Sundarbans

Joydip Kundu of the Society of Heritage and Ecological Researches, writes of the Society's efforts during the lockdown to aid vulnerable fishing communities living on the fringes of the Sundarbans landscape to reduce their direct dependence on the mangrove forests, a centuries-old stronghold for the Bengal tiger.

The correlation between a cyclone and its damaging effect on the mangrove forests in Sundarbans cannot be explained in a linear outline. Cyclone Amphan, the most lethal cyclone in the history of Bengal has changed the profile of riverine landscape of many villages across the Sundarbans Tiger Reserve (STR).

The Joint Forest Management of the STR runs the primary tiger conservation efforts in the region. Millions living in the fringe villages have grown to trust the field staff, who are prompt in coming to their aid in the time of a crisis, be it large or trivial.

However, due to the remoteness and fragility of the landscape, it is impossible for the staff to win over the entire fringe population singlehandedly. The Society for Heritage and Ecological Researches (SHER) has always believed that without winning over the fundamental stakeholders of this unique bionetwork, conservation efforts remain unsuccessful.

The primary occupations of these communities are rain-fed agriculture and fishing. Agriculture, being a seasonal source of income, has suffered a major setback by the devastation caused by the cyclone, while fishing puts massive pressure on forest resources. 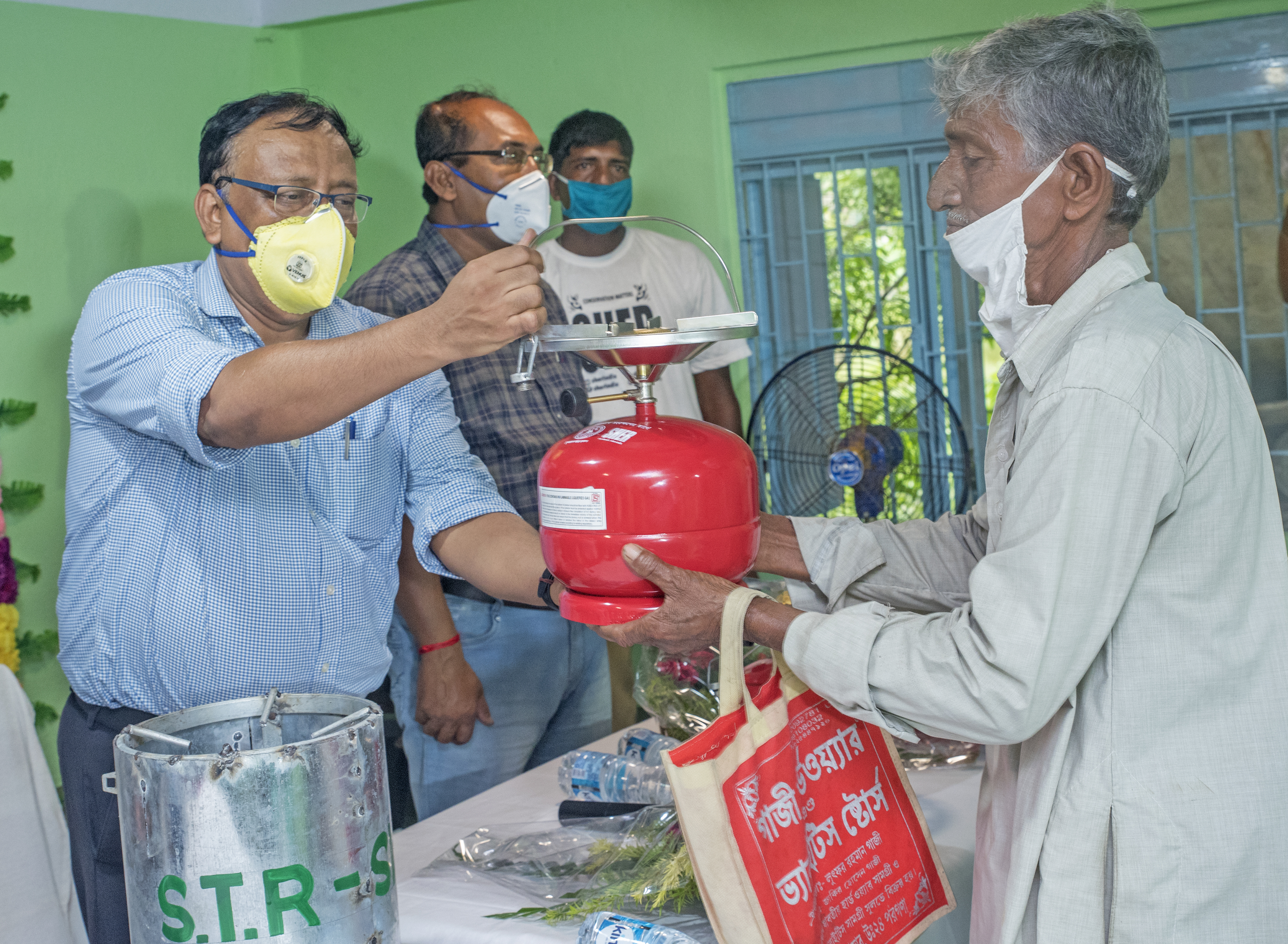 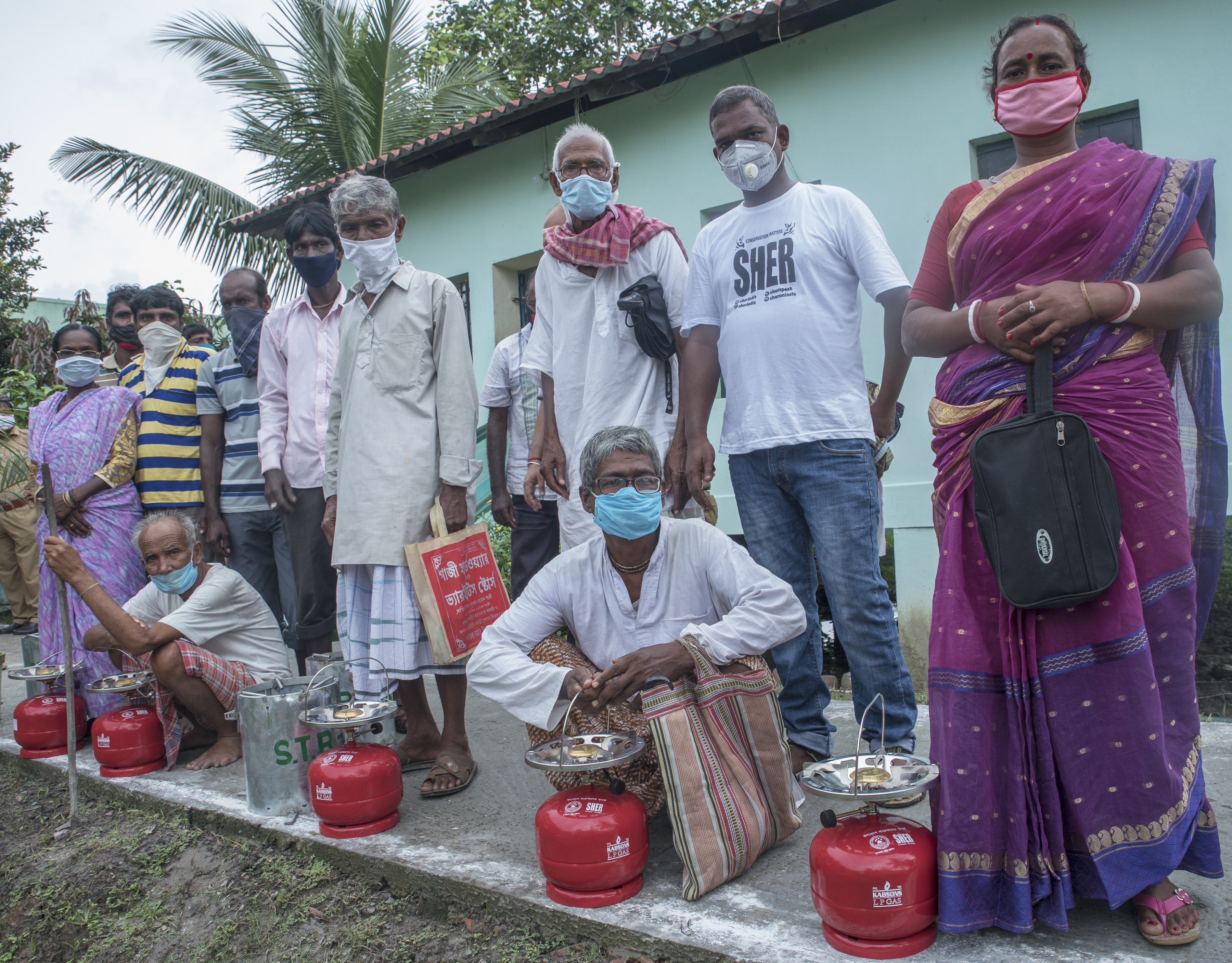 SHER has been providing distressed communities with relief supplies and medical assistance at ground zero since the very day after Amphan struck. The Society has been working resolutely towards its objective to mitigate human-wildlife conflict in Sundarbans and other wildlife areas of West Bengal since its inception.

The double catastrophe of cyclone Amphan and COVID-19 has landed a blow to the livelihoods of fishing communities in the delta, leading to an escalation in the dependence on forest resources and thus heightening conflict between the fishers and tigers. STR issues Boat Licence Certificates to fishermen for fishing in a sustainable manner outside restricted forest areas. These fishermen, who generally set out in groups of more than five, often spend days at a stretch fishing in the mangroves forest. During this time, they make use of traditional earthen stoves inside their boat to cook meals. These stoves run on dry firewood, which is hard to come by due to the humid microclimate of the Sundarbans. The fishermen are left with no choice but to anchor their boat near mudflats and enter the forest to fetch firewood, thus making them vulnerable to human-tiger conflict.

Tigers have been recorded attacking people frequently when their territory is encroached upon. However, there is little knowledge of the number of tigers that get injured, or the extent of their fatalities in such situations. SHER provides portable LPG cylinders to licensed fishermen that are identified by STR, so that they can refrain from venturing into tiger habitat. Around 100 fishermen out of 600 that are licensed have been provided cylinders by SHER, which also include a customised metal case for stability on turbulent rivers. On August 7, 2020, the first lot of LPG cylinders were distributed to fishermen from Bagna and Jhingakhali range at Jhilla office in the Basirhat Division in the presence of Ravi Kant Sinha, IFS, Principal Chief Conservator of Forest, Head of Forest Force and Chief Wildlife Warden, West Bengal, Tapas Das, IFS, Field Director, Deepak M., IFS, Deputy Field Director, along with other field staff of STR, Panchayat Pradhan and the local Gram Panchayat. On behalf of SHER, Joydip Kundu, Member, West Bengal State Wildlife Advisory Board and Suchandra Kundu, Honorary Wildlife Warden of Kolkata were also present.

The number of fishermen provided with the cylinders had to be limited due to the restrictions of COVID-19. Distribution of remaining cylinders will be done in phases. In consultation with STR, this venture of providing LPG cylinders to fishermen was conceptualised and implemented for the very first time in the landscape by the SHER team.