Flight Of The Harrier

The links between grasslands, locusts, mountains and waterbodies are stronger than most might imagine. Twice a year, Montagu’s Harriers trace the same 4,000-km. route between the protected forest area of Solapur in India and the Balakash lake in Kazakhstan.

The sun was setting low in the vast undulating plains of Gangewadi near Solapur, in south-western Maharashtra. On that cool December 2016 evening, we were in pursuit of the Montagu’s Harrier, a migratory bird of prey and one among the 16 harrier species found worldwide in tropical and temperate regions. Of these 16, six migrate to India from central Asia and neighbouring regions in winter. It was the ideal season for us to study their wintering ecology and migration patterns. Harriers are known to travel between 3,000 and 5,000 km. during each migration from their breeding to wintering grounds. 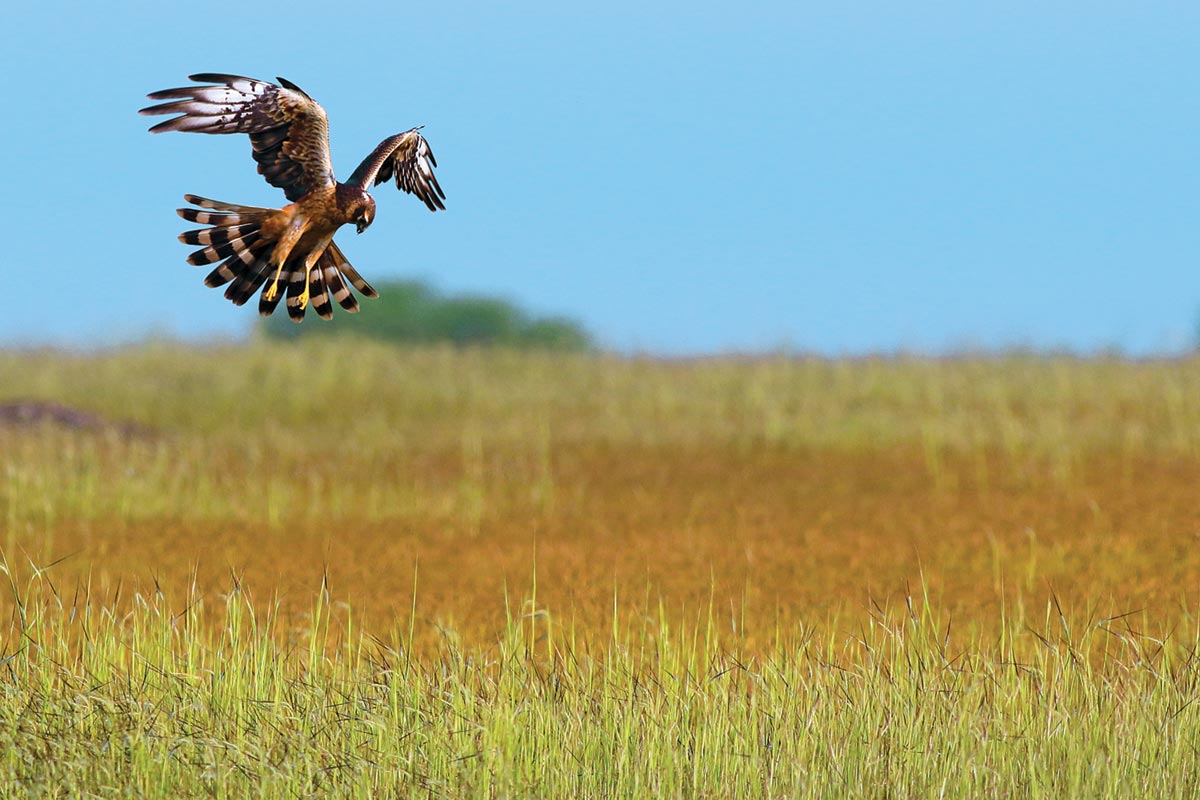 In Gangewadi, Montagu’s Harriers prefer to roost in the grazing areas in autumn, when the grass is fairly tall, before moving to the extensive grasslands inside the sanctuary in the drier months. From there they began their north-bound journey in springtime. Photo: Nagesh Rao.

A swarm of harriers was headed towards a roost in the Protected Area of the forest, to rest for the night. Fire line workers were wrapping up their day’s task of demarcating the forest sanctuary with controlled burning of grass to prevent wildfire in the farmlands, common at this time of the year, from engulfing the sanctuary. Just when it looked like we were not going to get lucky, a frail-looking brown bird that was perched on a boundary marker tripped and fell into the net we had set up near the grazing land outside the forest. Almost immediately, a strong gust of wind pushed the flames of fire inwards from the line, setting the tall blades of grass ablaze. We rushed to retrieve the bird that lay caught in the net only a few hundred feet away from the burning grassland, and secured the tiny creature into a cardboard box. This juvenile male Montagu’s Harrier, about a year old, had embarked on his first long-distance flight to arrive at Gangewadi.

As darkness loomed, we decided this would be our last adventure for the night. Harriers with grey and brown plumage could still be seen flying hither and thither to escape the rising flames to settle into adjoining patches of untouched grass. Crackling fire cinders occasionally interrupted the quiet night.

We were excited about the opportunity to tag our second harrier of the season from India and the first from Solapur. The remainder of the evening was spent in measuring the bird’s wings, tail and tarsus (the single bone between the toes and ankles). In our headlights, we found his moult and began the process of ageing it. As always, we tied a numbered ring around his foot, like a tiny piece of jewellery that the harrier was not particularly fond of, but which would give us information on his future flights and halts. In about an hour’s time, the bird was tagged and placed back into the box to be released the following morning. We planned to call this individual Gangai, named after the nearby village Gangewadi. 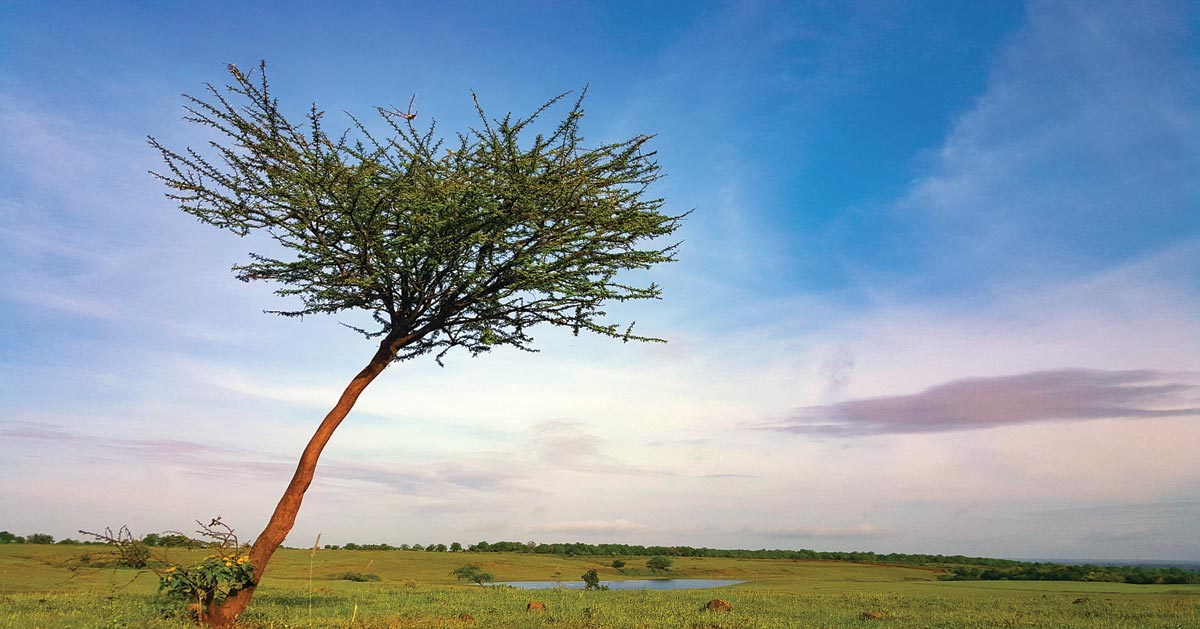 In Gangewadi, Montagu’s Harriers prefer to roost in the grazing areas in autumn, when the grass is fairly tall, before moving to the extensive grasslands inside the sanctuary in the drier months. From there they began their north-bound journey in springtime. Photo: Nagesh Rao.

Sometime through the night, the fire subsided on its own in a few places, while forest guards were working into the night to bring the fire line under control. The air was still thick with the smell of burnt grass. With the cold falling around our vehicle, where we and our little harrier had taken refuge for the night, sleep did not come easy.

Morning light shone through the sky and we let Gangai out of the box to fly free. He was quick to join his family members that seemed to be focused on picking the roasted grasshoppers strewn across the grassy ground. What fire does to one’s food! The harriers seemed to be adept at picking them from the fried meadow! 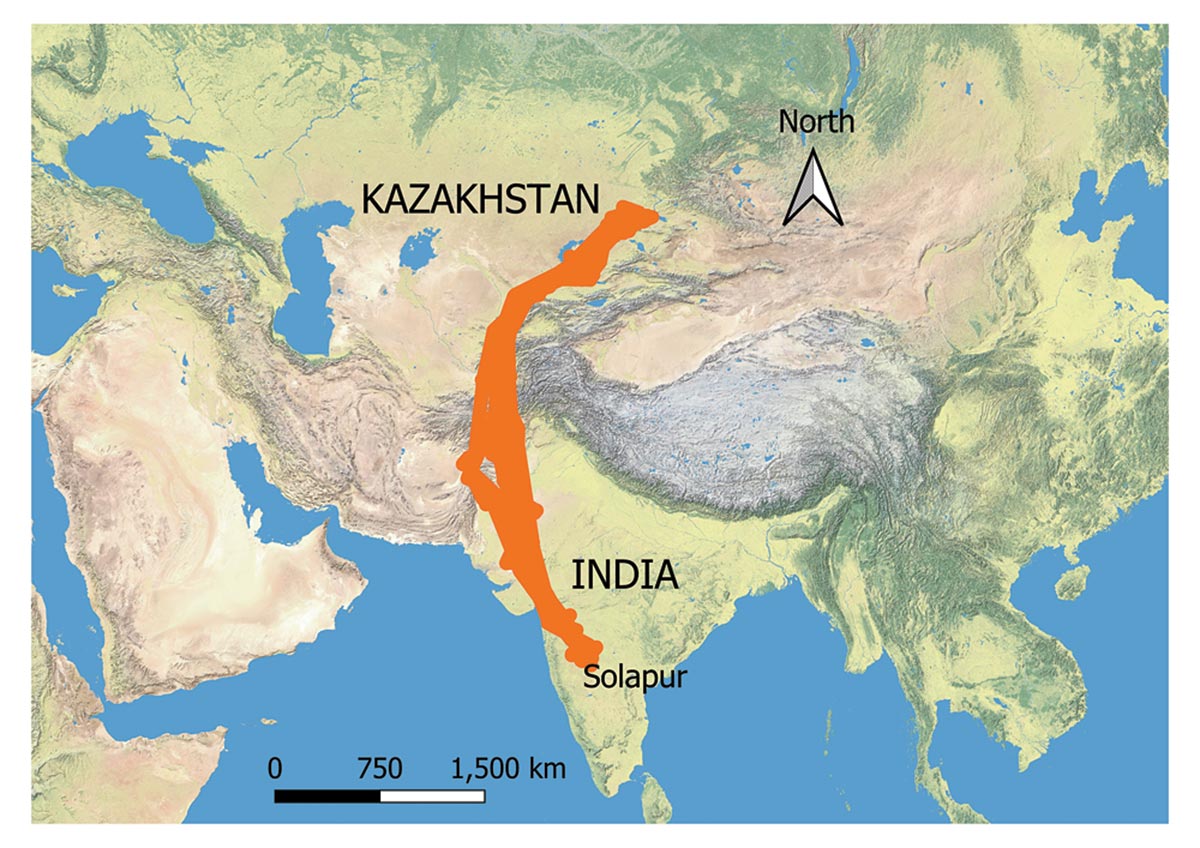 Route traversed by Gangai to reach Solapur from Kazakhstan. Gangai’s flight across 4,000 km. includes a rest stop taken in the Pamir mountains of Afghanistan and Kyrgyzstan, at an elevation of 4,000 m. Borders Not Verified Nor Authenticated Photo Courtesy: Prashanth M.B.

We had been waiting since the end of March for the young harrier to take his longer flight to reach the breeding grounds. But Gangai had not decided to leave Gangewadi, and we were worried. In the third week of April 2017, we hopped on a train that took us from Bengaluru to Solapur, to visit the bird in Gangewadi. Enroute, however, Gangai signalled to us that he was flying over Boom, a place located north of Solapur, a sure sign of the onset of migration. Though we knew he was bidding us goodbye for the season, this was good news! We heaved a sigh of relief!

Gangai’s journey, which began on April 27 and lasted for a period of 20 days, culminated at the breeding grounds near the Balakash lake in Kazakhstan. He had flown 4,000 km. including a rest stop taken in the Pamir mountains of Afghanistan and Kyrgyzstan, at an elevation of 4,000 m. 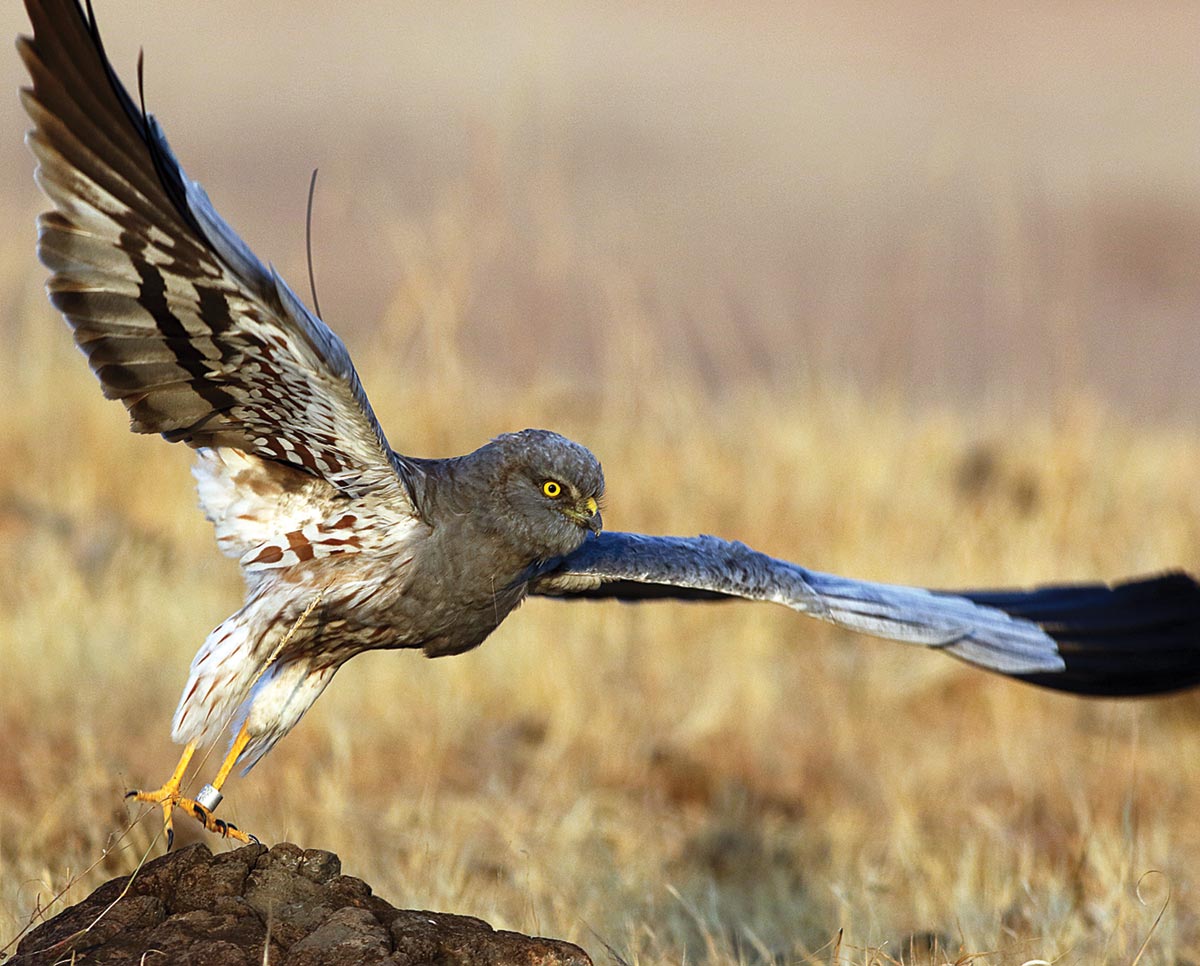 The male Montagu’s Harrier that was ringed by the authors, called Gangai, is seen here in adult plumage during succeeding seasons after he was tagged in December 2016, when he had juvenile plumage. Photo: Nagesh Rao.

Return of the Prodigal Bird

In early August, Gangai took a similar migration route back to the Thar desert in Rajasthan and stayed for 25 days before flying south towards Maharashtra. In about five months, the harrier had returned to the exact same fence post in Gangewadi! Rahul, Sarang, Daud and Bapu (our friends in the sanctuary), excitedly called us to share the news. Nagesh Rao and Prashanth Patil, photographers from Solapur, rushed to the location to document Gangai’s second year of migration. The brown had given way to a soothing grey, save a few streaks on his face and breast. The raptor preferred to roost in the grazing areas in autumn when the grass was fairly tall before moving to the extensive grasslands inside the sanctuary in the drier months. From there he began his north-bound journey in springtime each of the following years. 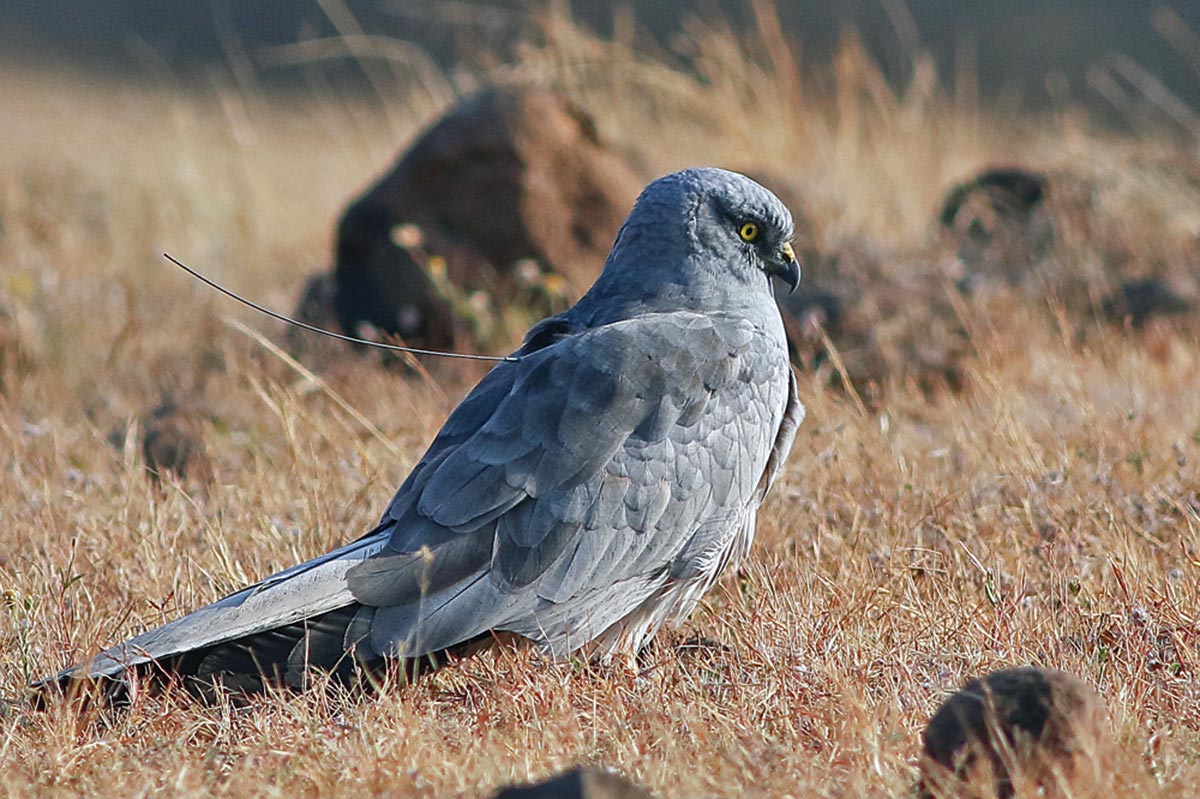 Gangai in Gangewadi in 2020. With age, Gangai’s brown plumage has given way to a soothing grey. Photo: Nagesh Rao.

Gangai was the first harrier to be tagged in Solapur in December 2016. Not surprisingly, in the months and years that followed, wildlife photographers and local naturalists were eager to capture him in their lenses. Gangai’s photographs up until October 2021 reveal how he has come of age from a frail young bird to a mature, adept adult. From a juvenile male in early 2017 with bright yellow irises and a deep brown plumage, he turned into a subadult in 2018 with a soft grey replacing the brown, and into a full adult by 2020 with a lightened grey appearance and a generous amount of white feathers. Montagu’s Harriers are known to begin breeding when they are two or three years old and attain a bright plumage by springtime.

Gangai migrates twice a year, travelling close to 9,000 km. both ways, and follows almost the same route to return to the same place to breed. Fascinatingly, after crossing the Indus river on his return migration, he often stops over in a very productive patch in the Thar desert to refuel. He had chosen well, for locusts and other grasshoppers are abundant here during autumn. 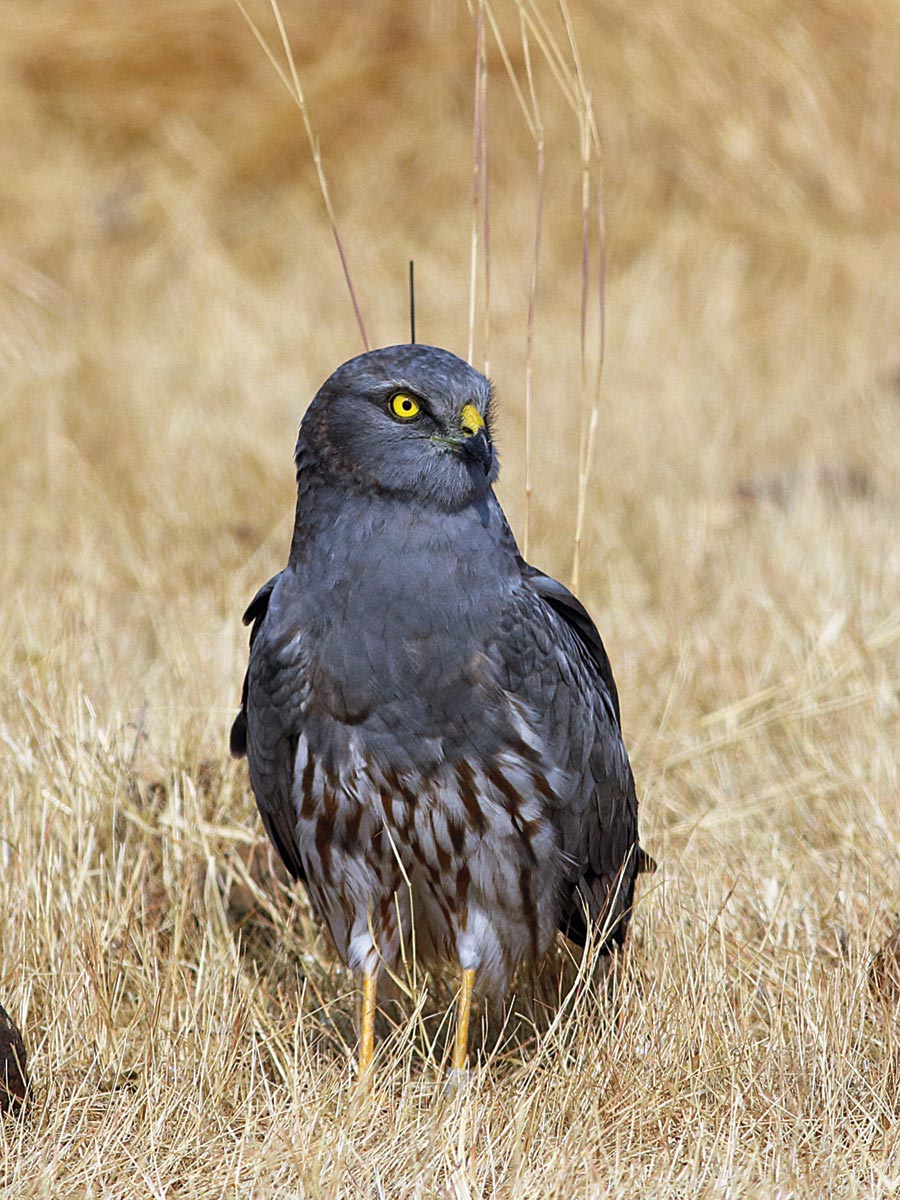 The authors tracked Gangai’s journey from 2017 to 2021. His first journey from India, which began on April 27, 2017 and lasted for a period of 20 days, culminated at breeding grounds near the Balakash lake in Kazakhstan. This image was taken in 2018. Photo: Prashanth Patil.

The harriers, it seems, are clocked to the planet to undertake this journey each season. While their migration across the continent offer us new insights into bird migration, their stay for six months in Solapur grants us time to observe and ponder their imperative (and capacity) to fly such a long distance. How long have the harriers been coming here? Perhaps a few thousand years or more. More importantly, what is happening to their preferred habitat? How does the changing crop pattern and land use impact Gangai and his mates that fly here in their hundreds each year? Lush fallow fields and grasslands have attracted these birds in the past, but that is a rarity nowadays. This makes sites like Gangewadi critical for the harriers that come in search of wintering grounds from distant lands. The ecological cycle of the faunal rich areas supports other creatures such as grasshoppers, antlions, lizards, small birds, and rodents, a rich diet that helps harriers survive in the area for about six months.

Five years have passed since we first began tracking Gangai and he appears healthy and thriving, based on all the photographs we obtained. Hopefully, he will continue on his migratory journeys and keep providing us crucial information on the longevity of the species, the habitat types they prefer and the migration routes they take through the little known Central Asian Flyway. The harrier’s arduous journeys between the grasslands of Maharashtra and the steppes of Kazakhstan each year, skimming over towering mountain ranges, makes us wonder about natures’ amazing ways and her delicate balance. Our little project has taken us one step closer to expand our understanding and appreciation of this beautiful and unique species. 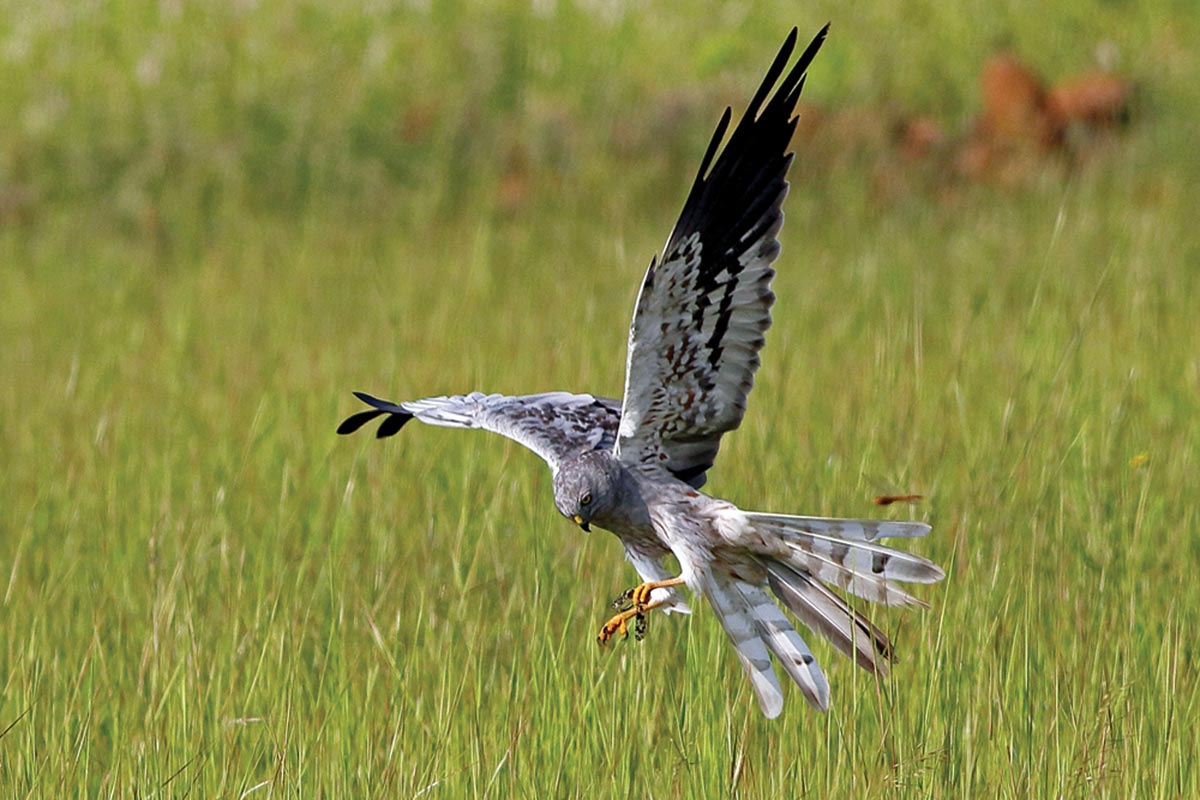 Grassland habitats like Gangewadi are critical for avians such as harriers that come in search of wintering grounds from distant lands. The ecological cycle of the faunal rich areas supports other creatures such as grasshoppers and rodents, a diet that helps harriers survive for about six months. Photo: Nagesh Rao.

We would like to acknowledge the support of the Ministry of Science and Technology and thank the Ministry of Environment, Forests and Climate Change and Maharashtra Forest Department for providing permissions for the study.

T. Ganesh, a senior fellow at ATREE, works to understand how species respond to changes in their ecosystems due to natural and anthropogenic effects. Prashanth M.B. studies birds in human dominated landscapes and savanna grasslands and is involved with citizen scientists to create inventories and map waterbirds. Nagesh Rao and Prashanth Patil are both wildlife photographers who work toward grassland conservation around Solapur and adjacent regions by creating awareness about the rich biodiversity in these grasslands. Bharat Cheda is a passionate wildlifer who runs the Nature Conservation Circle in Solapur that brings dedicated citizens together to care for wildlife in the region.