The Great Indian Bustard (GIB) is known locally as Godawan in my village Dholiya and in other villages around Pokhran in Jaisalmer District, Rajasthan. It can weigh between 15 to 18 kg., and is one of the heaviest flying birds on the planet!

GIBs were once an integral part of many grassland landscapes across India, but are now Critically Endangered. Only 150 individuals are left in India, of which 122 are found in and around the Desert National Park (DNP) landscape in Rajasthan. 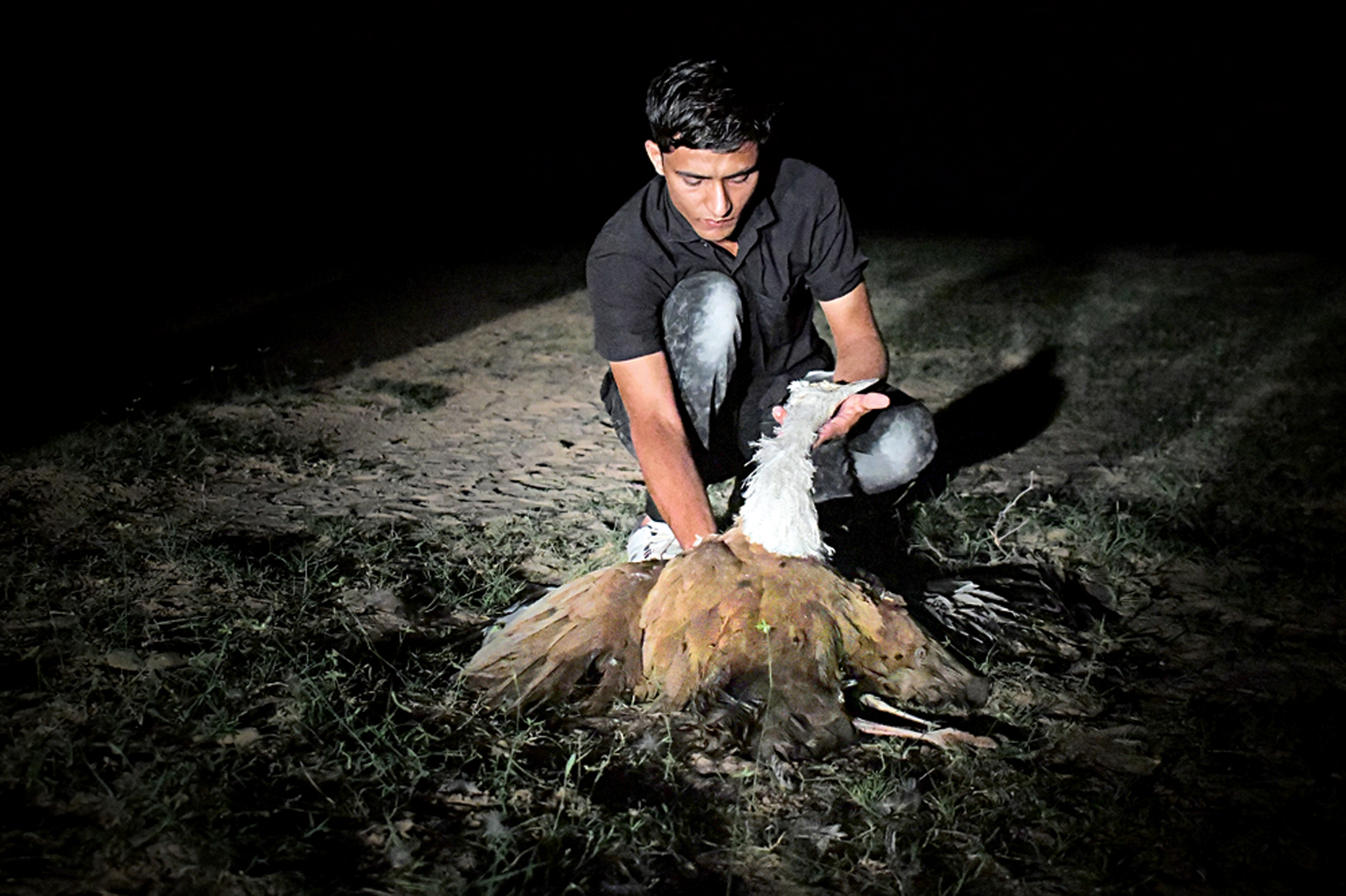 I first became aware of the dwindling population of GIBs when I travelled to Jodhpur to get help for an injured animal. I attended a three-month course on providing first aid to injured animals. I also attended a few workshops by the state Forest Department on wildlife conservation. I learned that the grasslands around my village and other villages in Jaisalmer district were home to the Godawan, and that they were on the brink of extinction.

At present, the main threats to their survival are loss of habitat, attacks by feral dogs, poaching, and accidents caused by human-made obstacles on their flight path such as high-tension electric power lines and windmills. 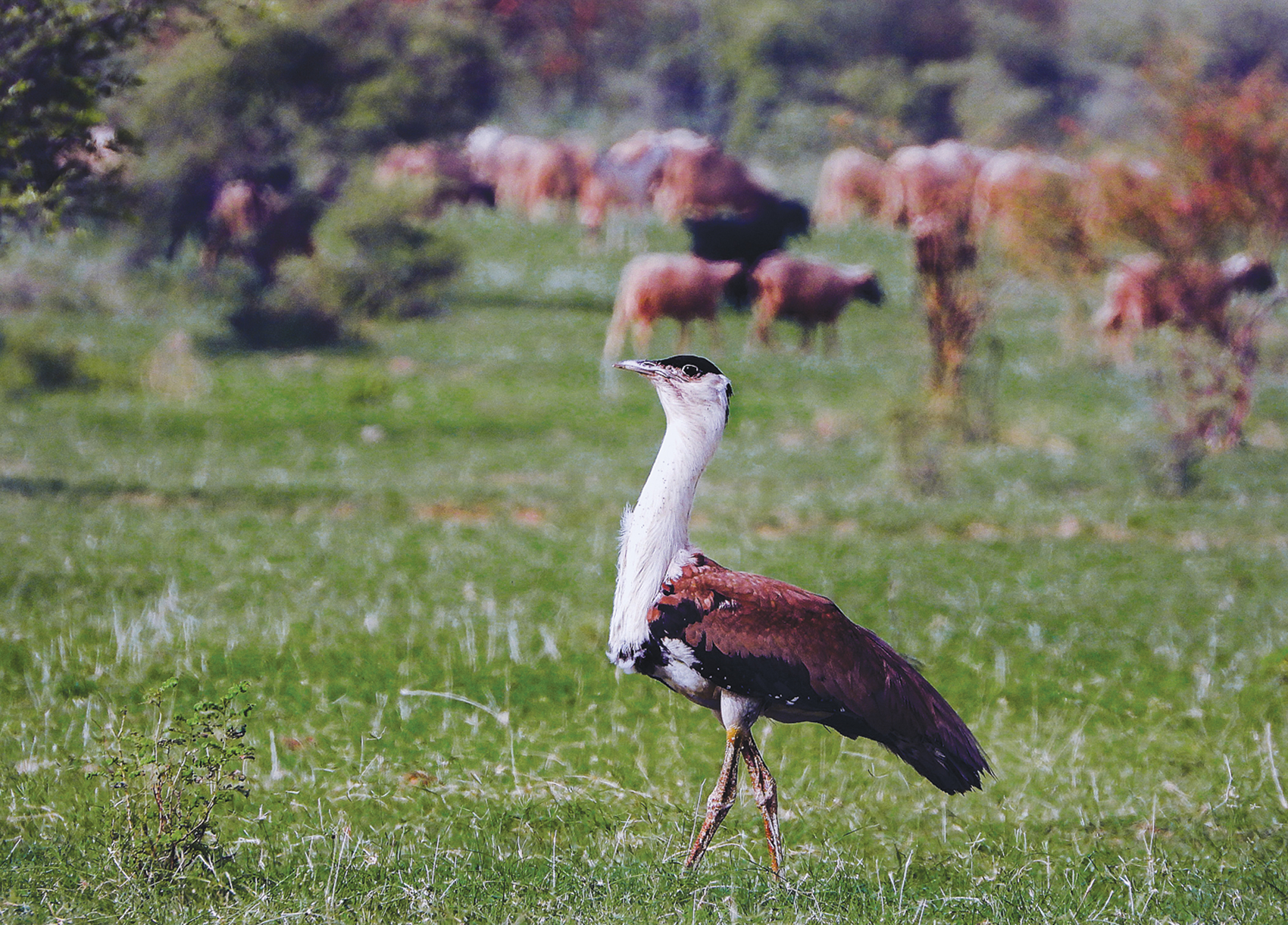 Ground-dwelling birds, GIBs prefer dry grasslands and are therefore regarded as an indicator of healthy grassland ecosystems. They feed on grass seeds, insects such as locusts, and reptiles such as lizards and snakes. This feeding habit helps to prevent crop loss and GIBs are usually considered good friends of farmers! Photo: Radheshyam Bishnoi

Saving the Godawan has so far been a community effort. With my friends at the ERDS (Ecology, Rural Development and Sustainability) Foundation, we are creating awareness. We periodically monitor the critical GIB habitats in the DNP landscape. We regularly patrol areas with high tension electric lines, railway tracks, roads, and open forests outside DNP in the eastern arc of the GIB habitat in Pokhran to check for casualties. We also collaborate with the Forest Department for emergency night patrols to nab wildlife poachers, based on information shared by our allies from local herding communities.

Three years ago, I had a very close encounter with a Godawan. During one of my weekly patrols, I found a bird with its wings trapped in a mesh of wires set up to protect crops from cattle. I immediately informed the Forest Department. I calmly approached the bird and gently touched its wings. After a while, when I saw that it was not scared of me, I held it still and untangled its wings from the wires. I then loosened my grip and watched it fly away. I stood still, adoring its huge majestic wings that were now free and taking it home.

Radheshyam Pemani Bishnoi is a wildlife conservationist, a trained wildlife rescuer, and a photographer. He is a Sanctuary Mud On Boots Project Leader and Sanctuary Young Naturalist 2021.