By T. Ganesh and P. Kanniah

Some 20 years ago, on a November morning, we arrived at a grassland patch or kancha as they are called, near Hyderabad, just as dawn was breaking. A few wisps of clouds could be seen above the dimly lit grassland, which was coming alive to the calls of bushchats and the restless fluttering of lapwings.

No sooner had we settled, than we spotted the object of our journey: a flock of harriers emerged from their roost in quick succession, just 100 m. away, before sailing off gracefully into the brightening horizon.

Harriers are solitary birds of prey that migrate to India in the winter. Easily recognisable as kite-sized birds flying five or ten metres above the ground, wings held in a broad ‘V shape, harriers prefer grasslands, dry crop lands, scrub country and relish being in wide, open spaces, which they skim in search of insects, birds, rats, reptiles and other prey. Of the 16 species of harriers found across the world, six are present in India - Montagus Harrier, Pallid Harrier, Hen Harrier, Eastern Marsh Harrier, Western Marsh harrier and the Pied Harrier, all of which are migratory. Although it is likely that these birds migrate from regions in Central Asia and Russia, the exact location of their breeding sites remains a mystery that will hopefully be solved by the use of GPS tracking collars that are increasingly being used in recent studies on the birds. 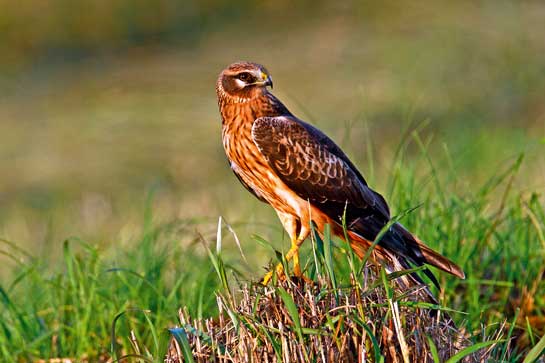 Harriers roost communally in good dense grasslands. This bestows them with the combined benefits of warmth and security in numbers. The largest harrier roost in the world is to be found in the Velavadar National Park, Gujarat, though another particularly large roost exists in the Rollapadu Bustard Sanctuary in Andhra Pradesh.

Of late, large tracts of open grassland are declining in India, creating a shortage of vital habitat for several endangered species including Great Indian Bustards, floricans, wolves and foxes, plus uncounted species of ground birds, such as the sandgrouse, coursers, larks and the Short-eared Owl. The steady demise of grasslands, most often converted for agricultural use, forces wild species into oblivion. One such is the Asiatic cheetah, a victim of the twin-attacks of hunting and habitat destruction. 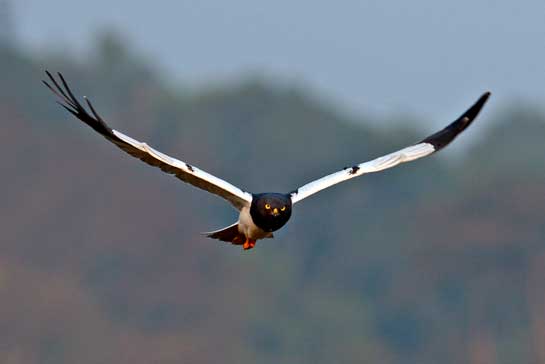 The Deccan Plateau region of Andhra Pradesh and Karnataka once held several grassy patches that served as grazing grounds, and as a source of raw materials in rural areas. Grasslands also provide invaluable ecosystem services, preventing soil erosion and locking carbon in the deep grass roots. Unfortunately, such vast, open spaces have all vanished and, even worse, the smaller ones are now under severe threat.

In a study on grassland conversion in the southern Deccan Plateau, we found that a large percentage had been converted to monocultures. We did a study on how even small grasslands are important for harriers near Hyderabad. This was a long-term study between 1986 and 1994 to see changes in harrier numbers. We chose a small, one square kilometre grassland patch. We counted harriers at the site as they came to roost. The two of us positioned ourselves at strategic points with binoculars, notebook and watch in hand, just outside the grassland patch in the evenings. The birds would begin arriving two hours before they would roost, but the bulk of them would fly in the last 20 minutes. The ones that came early would sit on the ground, preening themselves with occasional take off. As the sun went down, these birds would suddenly gather together and fly into a broad but cohesive flock over the roost. This gave us a good opportunity to make a total count of the birds as most were airborne. Our individual counts usually matched with this total count. We recorded five species of harriers in the roost though the Pied was the most uncommon and the Western Marsh/ Montagu were the most common. This counting was done at least once in 10 days every month over eight years. The results that emerged were interesting; with fluctuations across the years, and a gradual decline of harriers from over 200 in 1988 to about 65 in 1994. There is no information of this kind to compare with from other sites in India and so we are left to speculate on such changes.

During this period no major transformation in the grassland or the surroundings happened, therefore could such signs of decline indicate changes happening to the populations of these migrant birds elsewhere? Or was this part of a longer cyclic change which could not be detected in eight years? The other interesting aspect is changes over the months; the dry land specialists like Pallid and Montagu Harriers were more or less stable across the years but Marsh Harriers, birds of wet and marshy lands declined as winter waned, possibly because the waterbodies were dried up.  In any case, such results call for a large coordinated effort to monitor harriers at specific places across India, along its migratory routes spread across countries and in their breeding sites in central Asia. 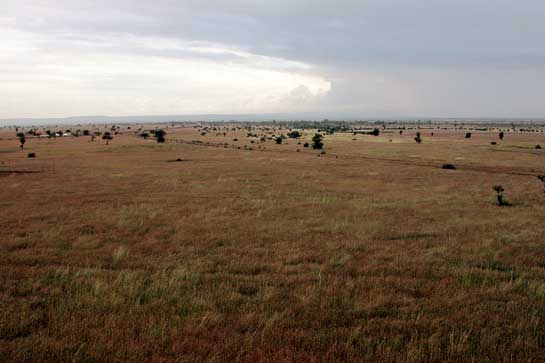 While our patch of grassland did not undergo any degradation, elsewhere in India, grasslands are rapidly disappearing. The main cause for this degradation is the ease with which grasslands can be transformed, aided by outdated policies that look upon natural grasslands as wastelands. Studies have shown that converting grasslands for agro-forestry activities can lead to soil salinisation, on account of excessive absorption of ground water by trees. Worse, grasslands are now threatened by biofuel plantations, GM (genetically modified) crops, multinational infrastructures like SEZs, the expansion of the agricultural sector wherever new irrigation is introduced. In addition to this is the invasion of exotic species like Prosopis juliflora.

Another scourge for grassland birds is the indiscriminate use of pesticides. Harriers forage for grasshoppers in cotton fields, which are drenched with pesticides and they suffer the ill effects of biomagnification of toxic chemicals. The examples of Peregrine Falcons in the U.S. and vultures in the Indian subcontinent bear testament to the fact that raptors are no longer safe in India.

Recently having moved out of Hyderabad, I revisited the grassland site of that early morning, where we conducted our long-term monitoring study. We could see a large, high-security building surrounded by trees in the centre of the grassland, edged by housing plots and a water tank, offering a panoramic view of the transformed habitat. We waited until late in the evening, to see if any harriers would appear, but none did, nor did we see any Short-eared Owls. Instead, we saw several parakeets and mynas coming to roost on the newly-planted Acacias.

The last thing harriers in India need is the loss of their winter roosting sites, which will force them to adapt to sub-optimal habitats, thus placing them under even more stress.  We need to protect what few patches of grassland remain so as to afford harriers a safe place to roost at night. This is not an unsurmountable task, particularly if community-conservation programmes that are well managed can benefit locals by giving them fodder, even as they provide a home to our harried wintering harriers.