Text and Photographs by Nirmalya Chakraborty

On April 5, 2020, the Wildlife Conservation Society that runs the New York Bronx zoo reported that one of their captive tigers had tested positive for COVID-19 —the first known infection of the novel coronavirus in a big cat. The four-year-old Malayan tiger named ‘Nadia’ had developed a dry cough and loss of appetite in late March and soon, Nadia's sister ‘Azul’, two Amur tigers, and three African lions also showed the same symptoms.

When reports about Nadia started coming in, incidentally, one male tiger from Pench Tiger Reserve also died with similar symptoms of COVID-19 (though later post mortem proved otherwise). This caused great concern; the National Tiger Conservation Authority (NTCA) and the Wildlife Division of the Ministry of Environment, Forests and Climate Change (MoEFCC) promptly responded to the advisory by closing down all tiger reserves and national parks till further notice, to reduce human-wildlife interactions. Only forest staff, after COVID-19 clearance, continued to have access to Protected Areas for protection, monitoring and conservation duties. They were also ordered to patrol, observe and report any tigers sighted with respiratory symptoms and ailments, such as rhinotracheitis - nasal discharge, coughing or laboured breathing. Protocols for handling sick and ‘conflict wildlife’ were also published. No COVID-19 cases in wildlife in India have been reported yet. 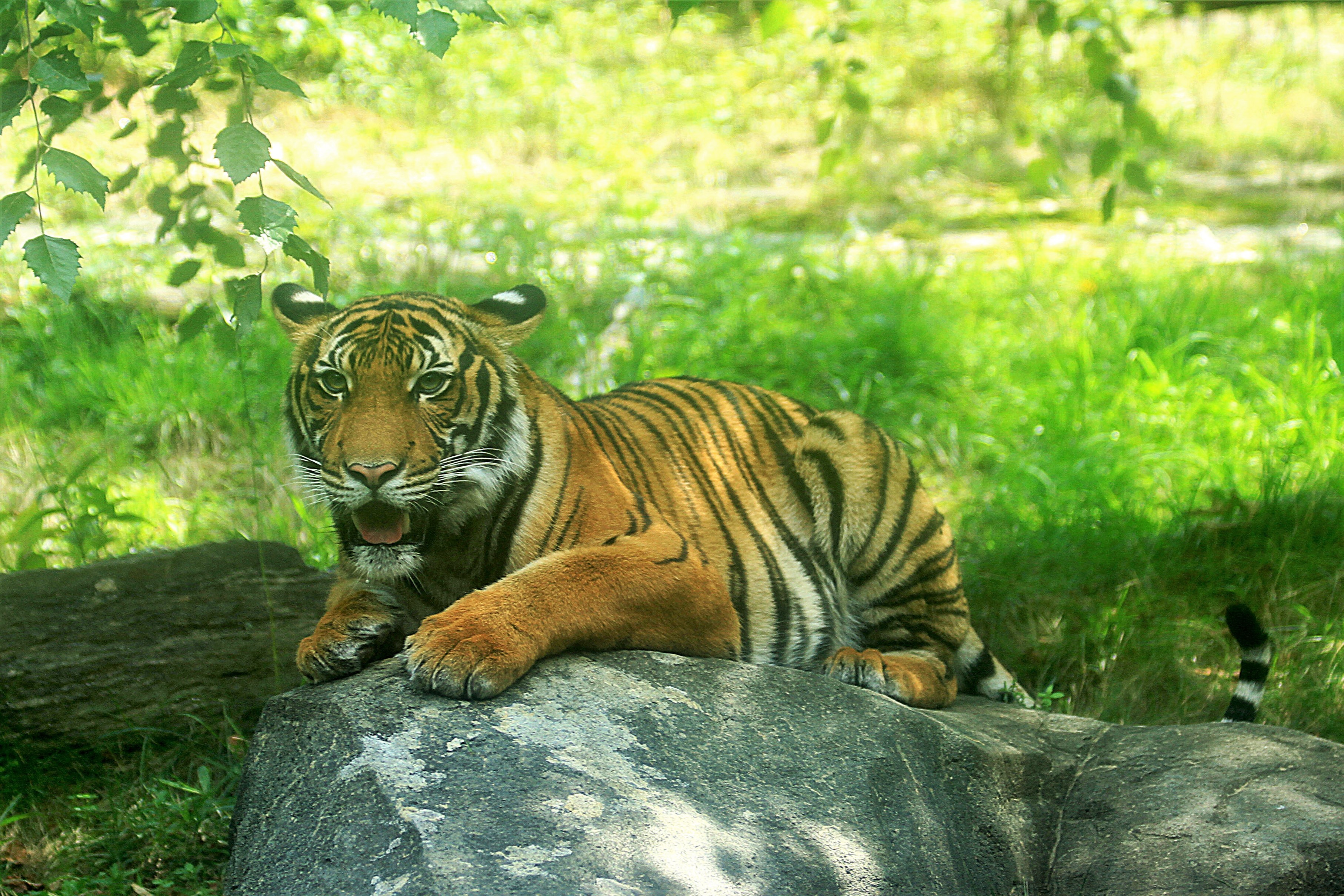 Forest guards, posted at remote Anti-Poaching Camps, live deep inside our forests; their food supplies are usually arranged using boats or park elephants by the Forest Department. Due to the sudden lockdown, their regular supplies could not reach them on time and they reportedly survived on their residual supplies and wild fruits. Their personal lives were also deeply affected. Their families mostly live in neighbouring towns and forest villages. Every month, the guards visit their family to provide for their needs, and also repay debts to local shopkeepers or merchants.  With a life of isolation and hardships, their families are also in distress. It is worth acknowledging their sacrifice, spirit, selflessness and dutiful nature that are protecting our forests as we stay cosy in the comfort of our homes.

The Forest Departments with their limited staff could not operate with full strength to monitor and secure the fringes of the forest. These forest patches are the zones of human infiltration and wildlife movement out into human lands. Informers usually from the local communities work along with the Forest Department, keeping an eye out for anomalies or intrusions in the forest. They act as a vital information service for the overall wildlife protection system. With most of the people locked indoors and less-eyes available for vigilance, these critical services were now delayed or absent. This thus created the perfect opportunity for both poachers and opportunistic hunters. Those who became unemployed during the lockdown were on the lookout for easy income. Many wildlife experts now acknowledge a rise in poaching is more of a concern for India’s wildlife than COVID-19. 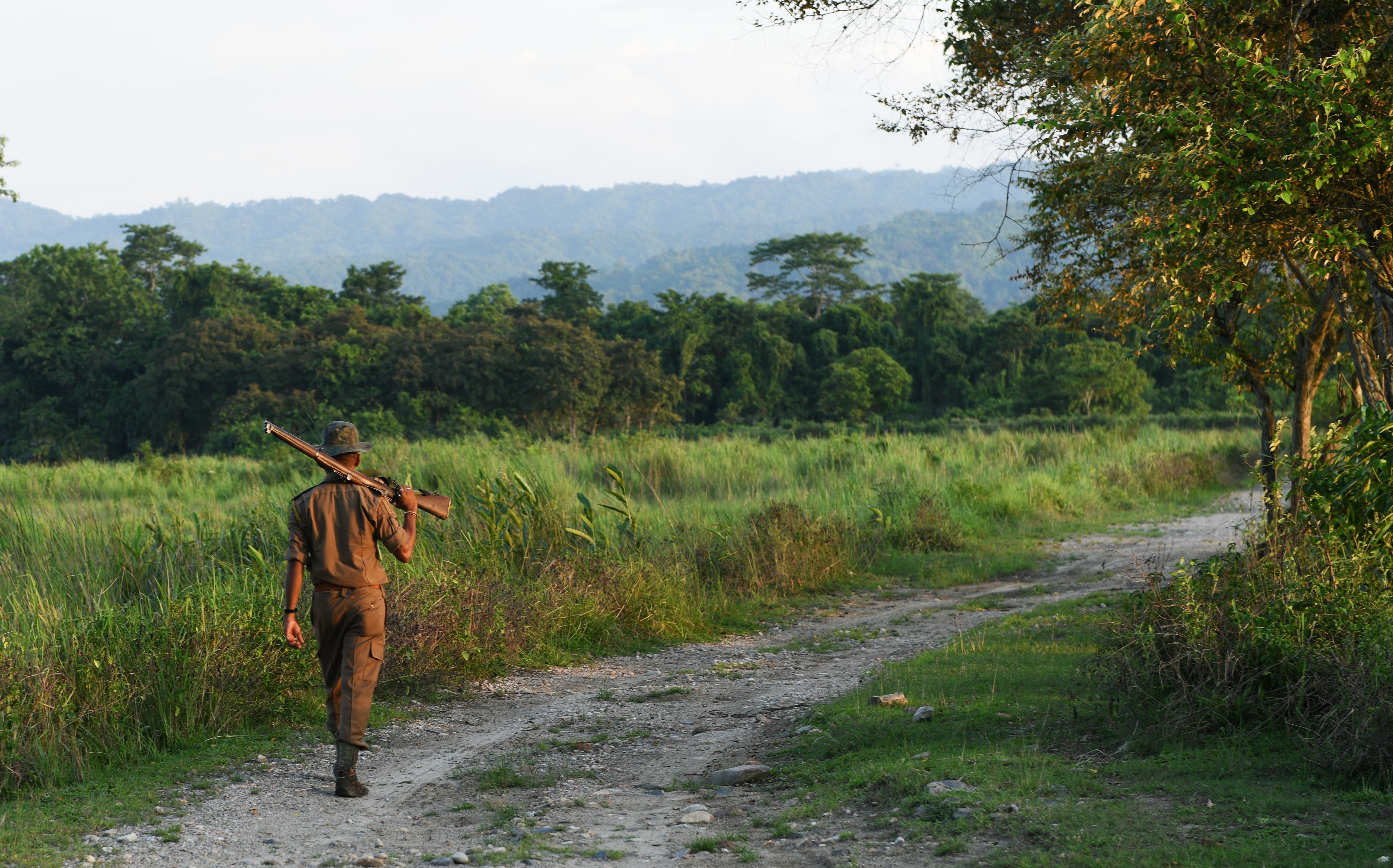 It is worth acknowledging the sacrifice, spirit, selflessness and dutiful nature of Forest Guards, who are protecting our forests from rising poaching incidents during the lockdown, as we stay cosy in the comfort of our homes.

A recent report by TRAFFIC, a leading wildlife trade monitoring programme under WWF India network, revealed that poaching for wild meat consumption during lockdown has been the highest. Reported cases jumped from 22% pre-lockdown, to 44% during the lockdown. Some of these cases were attributed to craving for meat and local meat shops being closed. Cases were reported from Santalpur region of Patan district in Gujarat, Kodagu and Shivamogga, Karnataka, where poachers were caught trying to sell deer meat for consumption. Depletion of herbivore species (prey) in an ecosystem where big cats thrive would naturally impact the ecological balance, escalate conflict cases and derail conservation efforts.

The TRAFFIC report also pointed out that there is a marked increase in poaching of ‘small mammals’, including hares, porcupines, pangolins, giant squirrels, civets, monkeys and smaller wild cats. These crimes amount to 17 per cent to 25 per cent between the pre-and lockdown periods. Poaching of big game was also reported from Kaziranga National Park where a rhino was shot dead by poachers, the horn chopped and taken.

Many travellers around the world who had planned their expeditions to wildernesses had to cancel their plans. Excursions out into the wild are carefully pre-planned to for the best experience. Cancellations are a real overhead. This is more relevant for people like researchers and documentary filmmakers, who have been directly impacted due to the sudden hold on their ongoing research on wild habitats, wildlife and tribal communities. 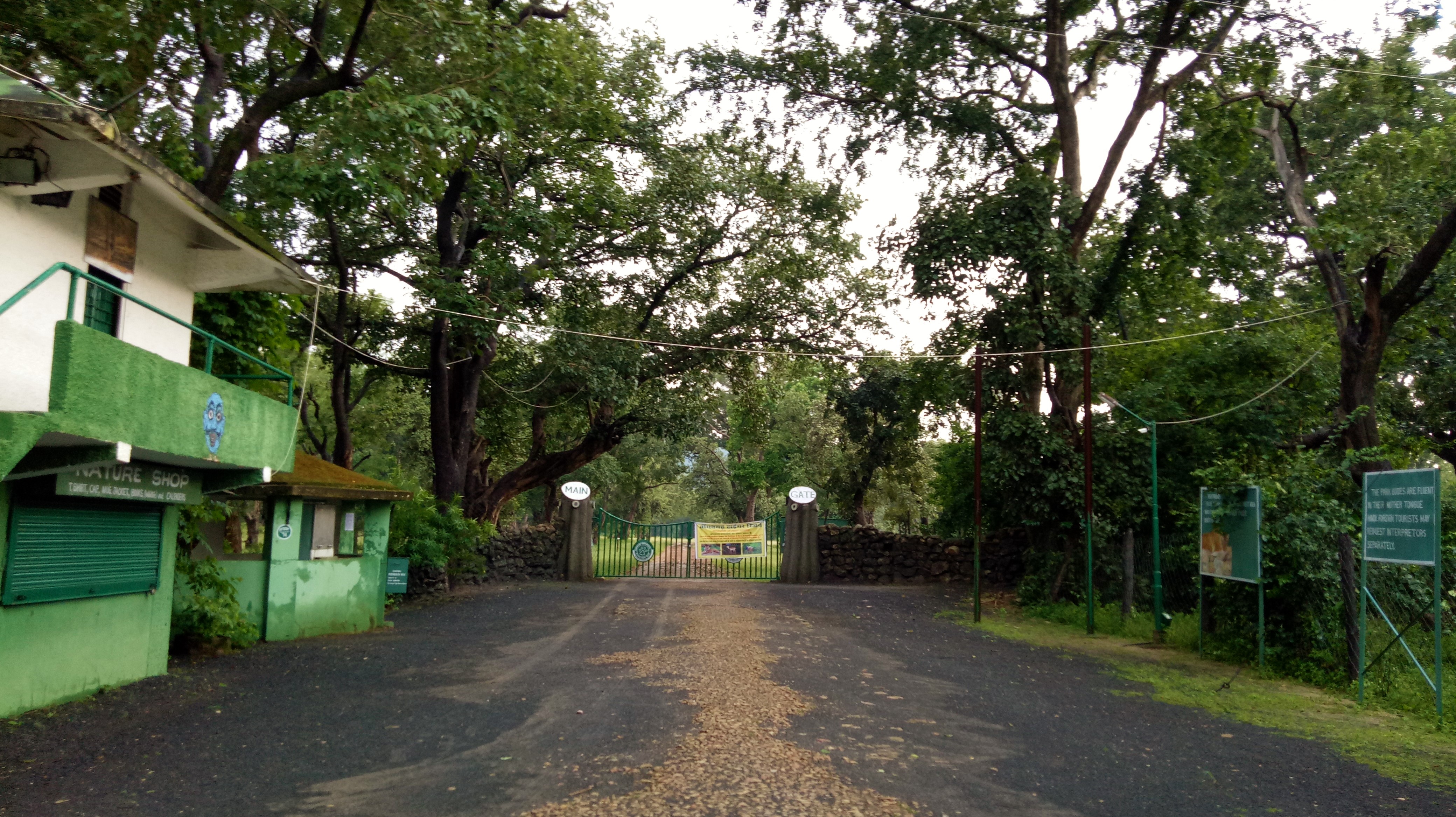 The closed gates of Bandhavgarh Tiger Reserve; all tiger reserves and national parks were closed down till further notice, to reduce human-wildlife interactions and restrict the potential spread of COVID-19 to animals.

With no access to national parks - jungle lodges, field naturalists, safari drivers, tribal driven jungle eateries, along with the entire ecosystem of individuals involved to run the entire machinery of managed ecotourism, have now collapsed. The entire season for their annual income has been ruined and many lives are in agony. Forest Departments have, in many places, helped the local communities with basic necessities during these tough times. Their losses are unrecoverable and cannot be yet assessed. Many local people, like the great wildlife naturalist ‘Sanju’, who belong to the forests of Tadoba, would have earned his annual income if my expedition plans would have matured this year. Sadly without work, he, like many others, is now forced to look for alternative livelihoods such as civil works or traditional farming. 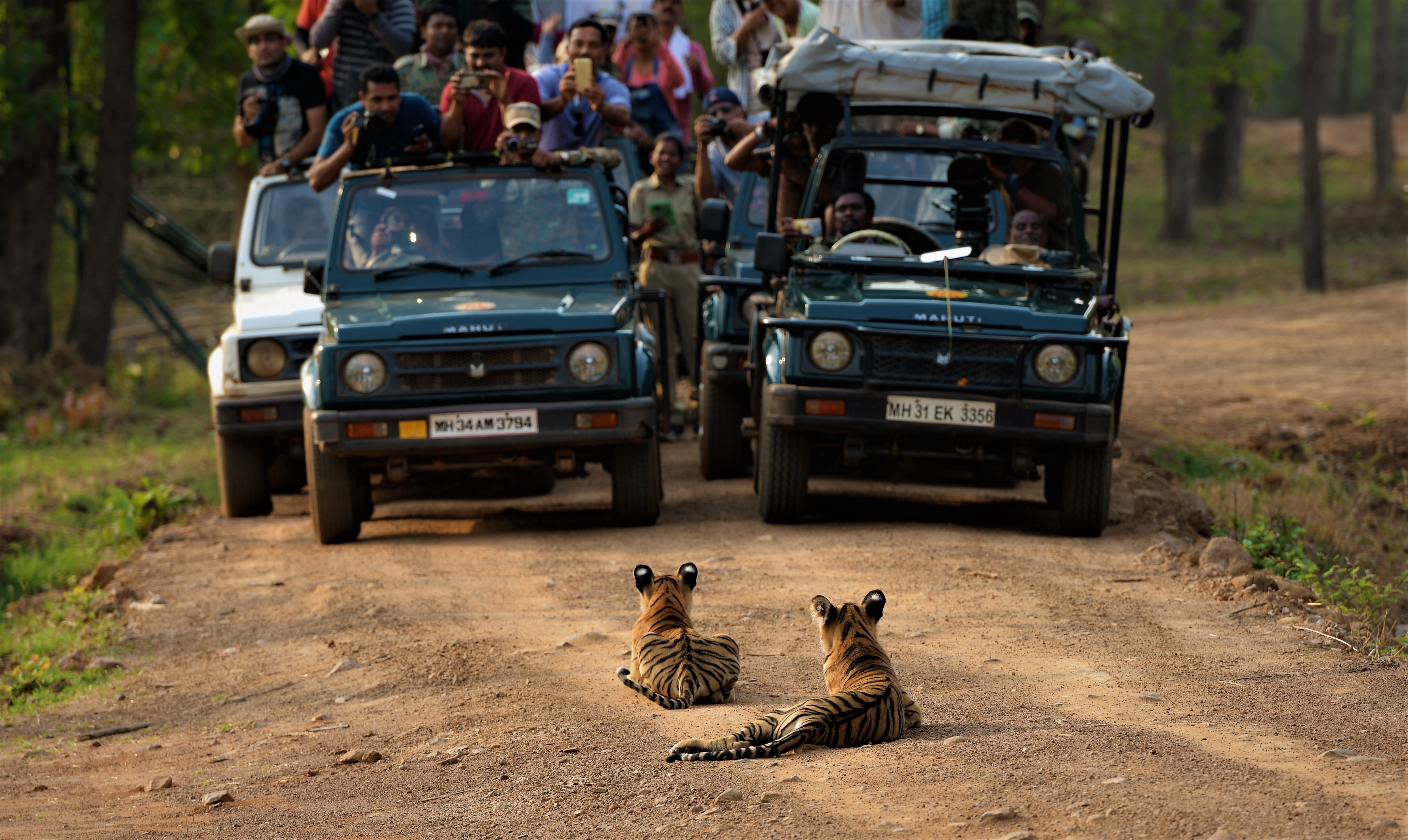 Tiger tourism in the pre-COVID-19 era was a major source of income supporting the livelihoods of Forest Officers and local community folk; the lockdown has severely impacted these people and led to an increase in poaching incidents due to lack of resources.

As per a global study, the economic contribution of wildlife tourism is impressive - US$343.6 billion (0.4% of global GDP) in 2018. Wildlife tourism supported 21.8 million jobs across the world, or 6.8% of total travel and tourism jobs. Due to COVID-19 lockdowns, the travel paralysis has meant the end of an economic lifeline for millions. The World Travel and Tourism Council have estimated that up to 75 million jobs are at immediate risk, and anticipate a global economic loss of up to US$2.1 trillion.

Not all is bad, however. As humans locked themselves indoors, Mother Nature started her gradual healing process. The green carpet slowly extended deeper into our lives in many places and our skies and rivers cleaned up with every passing day.

Urban wildlife has revived in many places as mornings are now welcomed with the sweet symphony of bird calls, otherwise silenced by the noise of human city life. Skylines have become clearer as the haze of vehicular and industrial pollution have significantly reduced. Blue skies in  New Delhi, distant snowy peaks of the Dhauladhar mountain range seen from the Jalandhar town, Punjab,  after decades are a few of the positive stories.

With pollution at an all-time low, river and canal systems are now much cleaner. As per current research, the Ganga river is now flowing much cleaner than in 1986’ likewise, the Yamuna river. Aquatic and fish life has become more active. Fish species that migrate upstream against the river currents find it easier in cleaner waters. Even the ocean depths are now quieter with fewer ships at sea, that once churned the waters with their noisy propellers. Marine researchers are studying how the silence is affecting the blue planet.

With forest corridors and wild places becoming ‘human free’, wildlife was now able to move more freely. A tiger was once sighted at Kurai ghat, comfortably sitting in the middle of the otherwise busy Nagpur- Jabalpur highway (NH44), deserted during a lockdown night. Frequent sightings of leopards have been recorded from Sanjay Gandhi National Park fearlessly seated on the walls of Aarey colony in Mumbai in the absence of significant human activity. Wild elephants of the Nilgiri Biosphere and Himalayan foothills have also entered many forests adjoining towns like Munnar, Wayanad and Dehradun. This year, the pink flamingos have returned in huge numbers to Mumbai and leopard sightings have started again in Bhagwan Mahaveer Sanctuary and Mollem National Park, Goa which once were rare to spot. All are great signs of nature regaining her lost beauty. 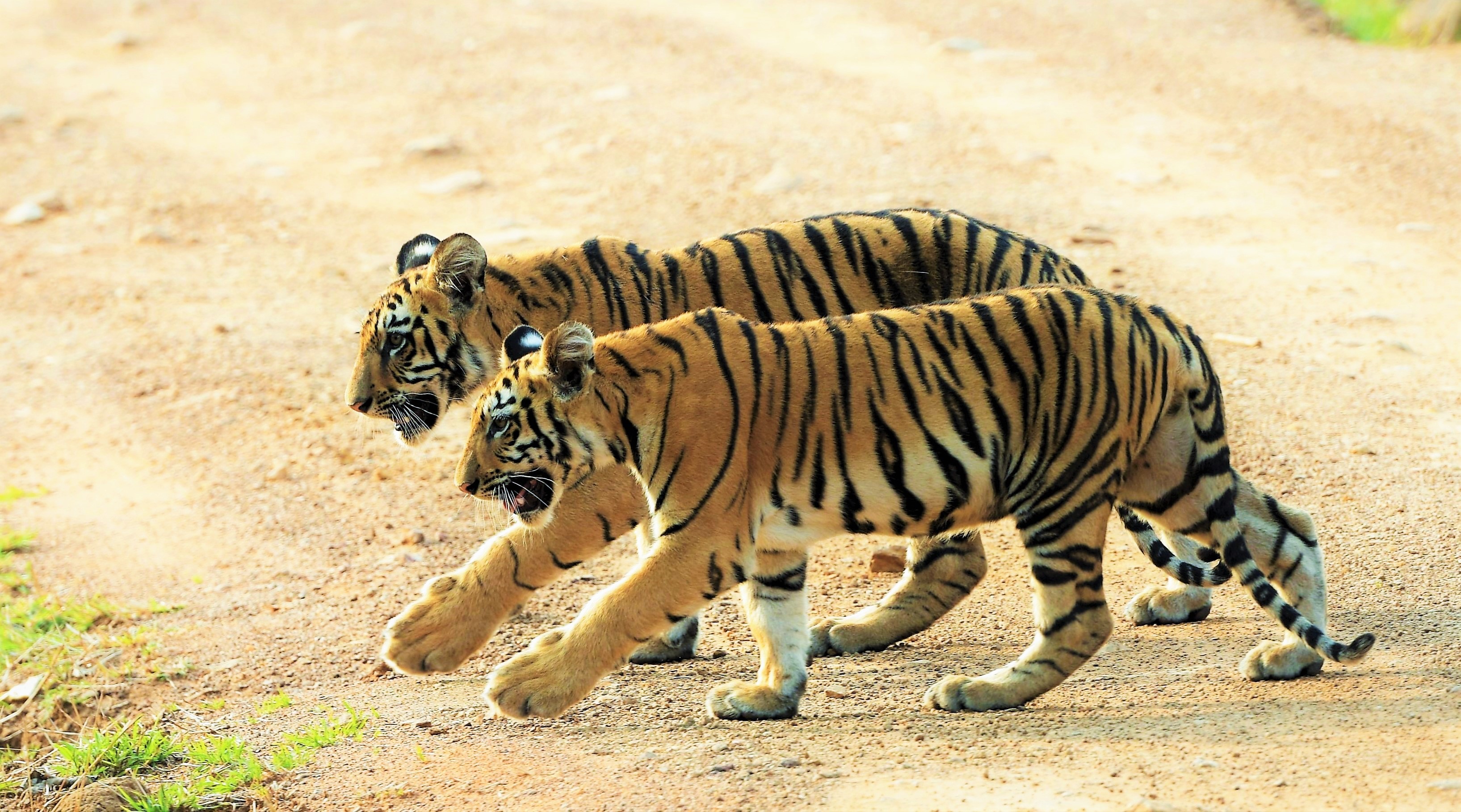 Tigress Maya's third litter of cubs photographed in Tadoba-Andhari Tiger Reserve; she has now given birth to her fourth litter of five cubs during the lockdown. With forest corridors and wild places becoming ‘human free’, wildlife is now able to move more freely.

As we stay indoors, it is time to introspect. We need to change our lifestyles for a better tomorrow. A conscious commitment is needed to lead an eco-sensitive life and contribute towards ecological sustenance and harmony. We all want to live in a safe healthy world coexisting with our wild neighbours.

Save the forests to save wildlife.

Nirmalya Chakraborty is a wildlife explorer. He has travelled to various global habitats and documented animal behaviour and key issues of conservation through storytelling and photojournalism. He is the editor of Jungle Rhythms magazine. His photographs have won various international awards including from National Geographic, and have been published in books, magazines and research papers.