How Not To Be A Tourist

The woods are lovely, dark and deep – but to continue to enjoy their grandeur, we have some promises to keep.

The United Nations Environment Programme confirms that by 2050, in a business-as-usual scenario, the tourism sector will generate an increase of 131 per cent more greenhouse gases (GHGs), 251 per cent more solid waste, 154 per cent more energy and 152 per cent more water. This warrants major shifts in the way the tourism sector currently operates. Positive steps taken today could yield environmental, social and economic dividends, that would in turn deliver better present and future benefits for biodiversity and local communities. There are many ways to ensure this, most of them agreed upon, few really acted upon.

Wildlife travel operators, resort owners and tourists benefiting from travel to wild spaces must be sensitised to the imperative of opting for sustainable tourism practices… not just to ‘save the world’ but to secure their own economic survival.

Responsible tourism demands that all players accept that protecting the integrity of the habitat and its wild denizens is in their own interests. Ditto for ensuring that local communities become primary beneficiaries of tourism in their backyards.

Here are some examples of what we do NOT need to see happening. 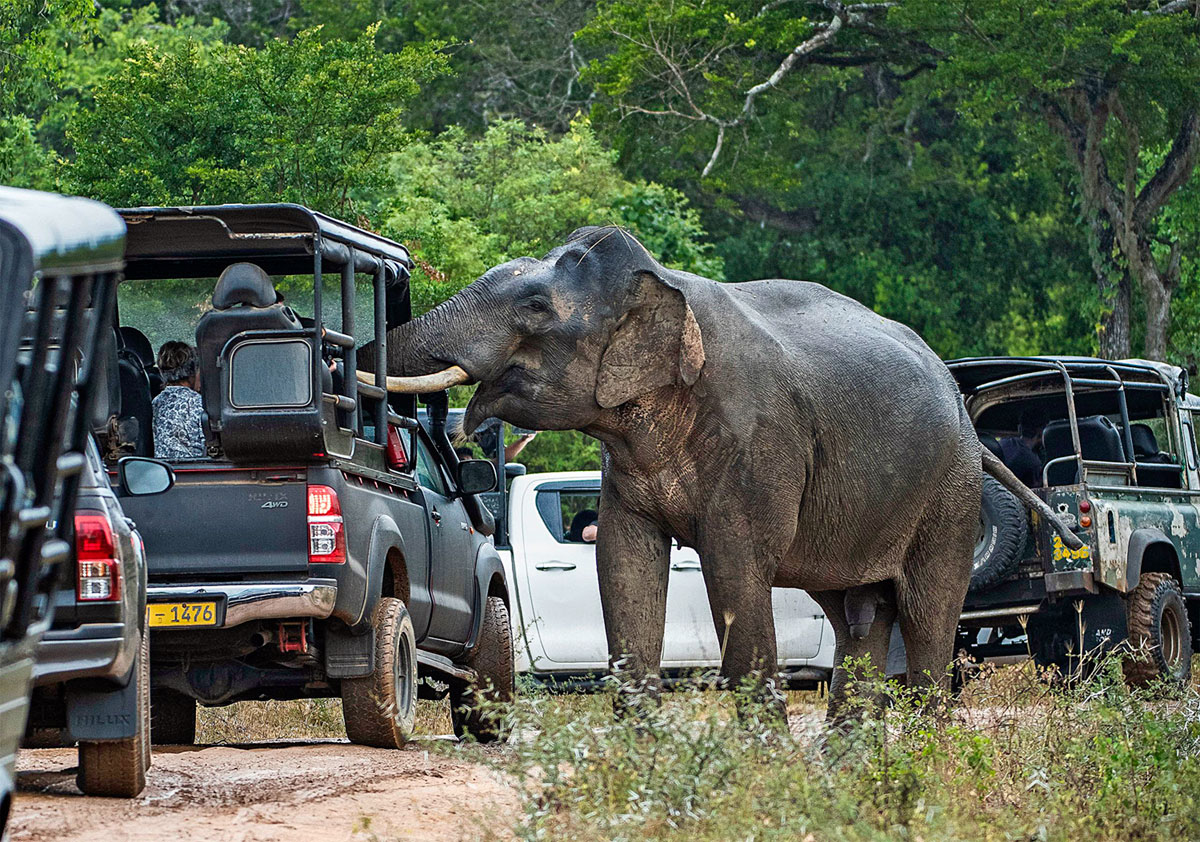 The Yala National Park on Sri Lanka’s southeastern edge is one of the last remaining habitats of the Asian elephant Elephas maximus in the island nation, which has a population of about 7,500 of these magnificent mammals. Yala is the most visited national park, and many jeeps ply its roads. Tourists often feed wild elephants, jeopardising the safety of both animals and humans. Wild elephants are tempted to beg for morsels and failure to source food this way often results in them raiding nearby fields.

Physical contact exposes both species to pathogens – animals are vulnerable to diseases such as tuberculosis, and humans are susceptible to naturally-occurring viruses, which jump from wildlife to humans, such as SARS-CoV-2, HIV and Ebola. 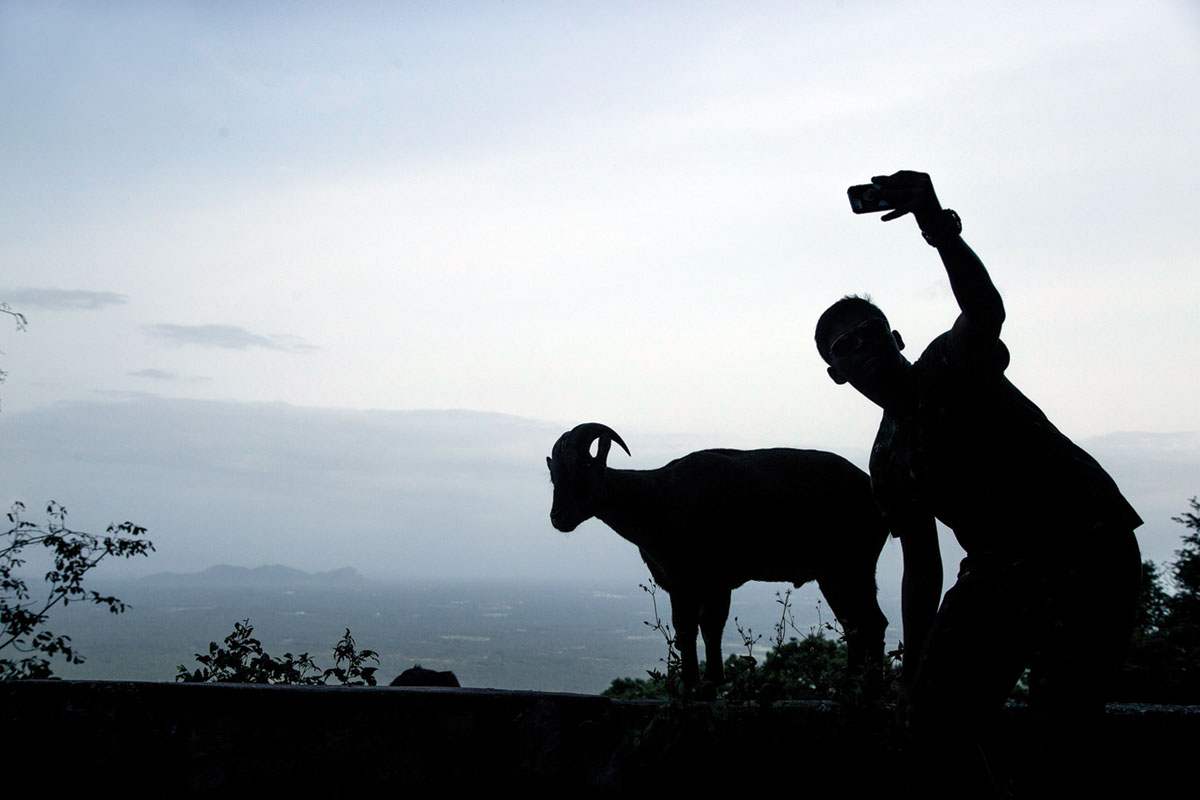 The hill station of Valparai is prime habitat for wildlife such as elephants, lion-tailed macaques, and the endemic ungulates Nilgiri tahr. The popularity of the destination has become a menace for animals. People do not hesitate to hop off and pose for pictures. Boundaries, humans? While dealing with fragile and delicate ecosystems, which support threatened and endangered species, tourists and tour operators require special educational sessions that sensitise them to the perils of human intrusions. 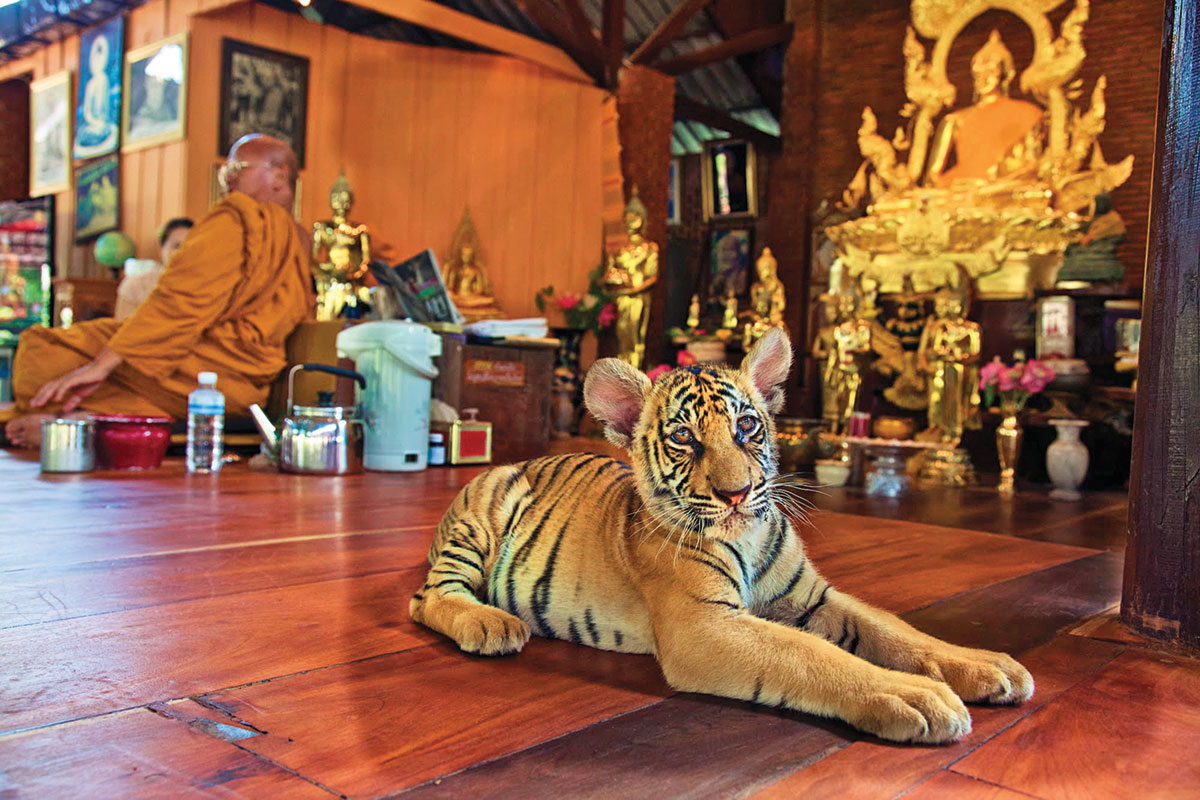 What does this all add up to?

After years of allegations of illegal trafficking and breeding of the wild cats, Thailand’s Department of National Parks raided the Tiger Temple of Thailand in 2016, following which the tourist destination was closed to the public. Distressingly, 86 of the 147 tigers were reported dead in 2019. Volunteers at the temple, which was run by Buddhist monks, had often spoken about poor living conditions for the rescued tigers.

Injured animals are traditionally taken to Buddhist temples, but the Tiger Temple was a theme park where visitors could handle and pose with tigers. Tourist money was supposed to buy better amenities for tigers but instead authorities found tiger parts and pelts that were given to those who donated money. Tigers were also allegedly medicated to make them more compliant for handling by visitors. This in turn fuels hunting of wild tigers. The Sanctuary Nature Foundation ran a well-received campaign – #TigerTempleTakedown – in 2016 demanding action to shut down the Tiger Temple.

While the Tiger Temple is shut, similar destinations continue to operate in Thailand, Laos and China. As of 2019, there were 2,000 captive tigers in Thailand. 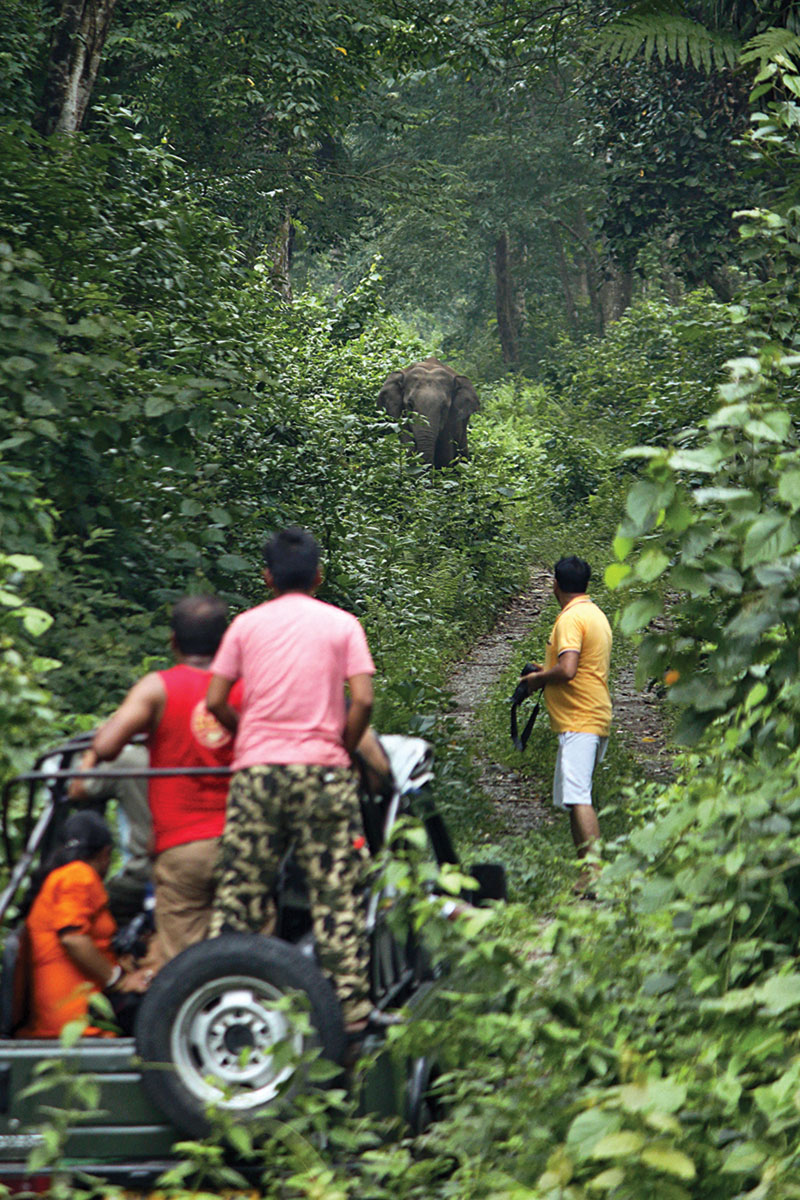 In the Buxa Tiger Reserve in June 2017, a safari vehicle full of tourists stopped for a herd of crossing elephants. One of the tourists jumped out with alacrity to take photographs, and began moving closer to the herd, despite repeated warnings from the driver and guide. Alarmed by the commotion, the elephants looked toward the jeep and suddenly, one charged! Luckily, it stopped just as quickly and no accident occurred.

Tourists are prohibited from leaving the vehicle in tiger reserves, except at designated points. In fact, chasing and feeding animals is a punishable offense. Visitors are advised to maintain silence, and listen to the guides. These simple tips keep both humans and animals safe in wild territory. 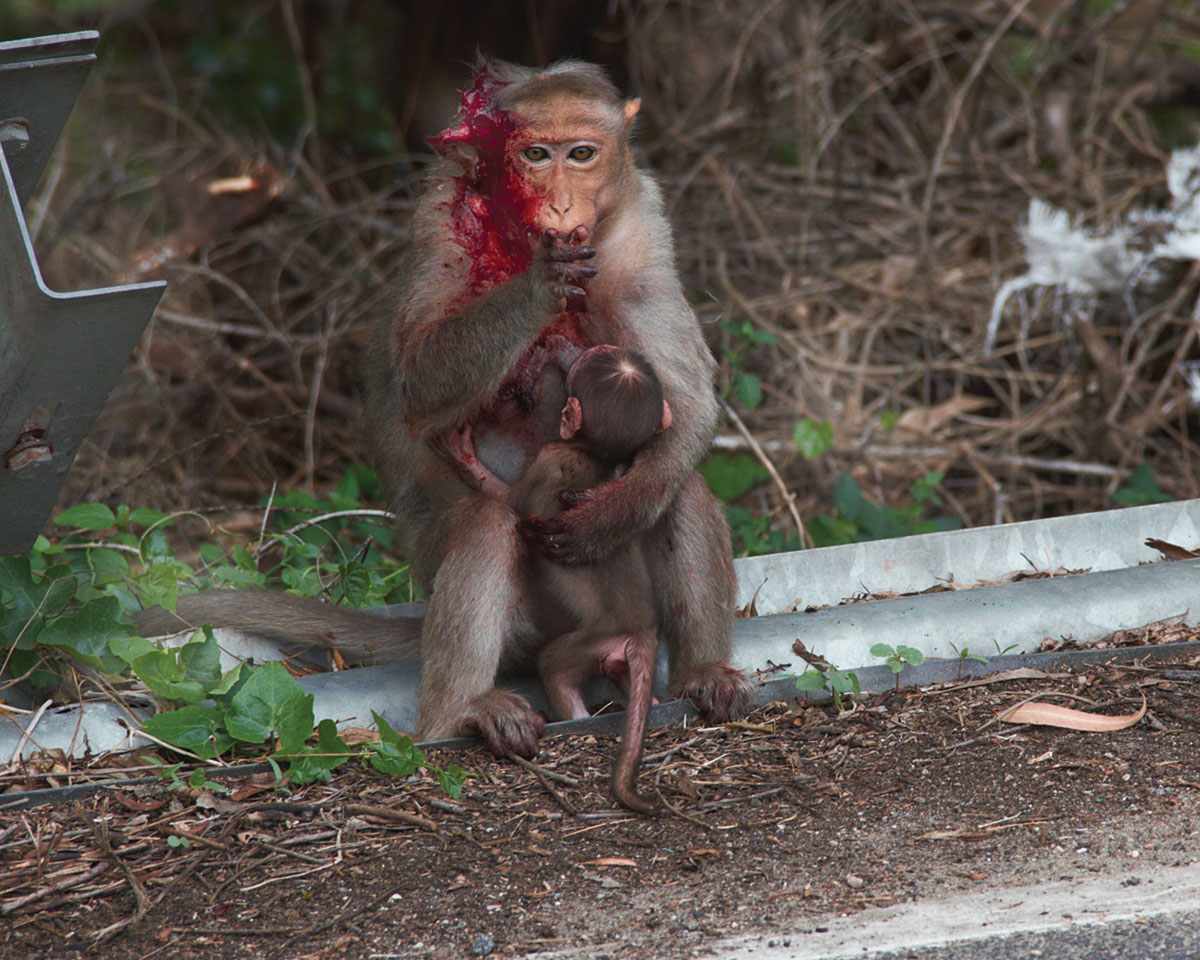 In a gut-wrenching moment, a mother bonnet rhesus macaque was hit by a speeding car on the Marayoor-Udumalpet road, Tamil Nadu in the Chinnar Wildlife Sanctuary. The profusely bleeding mother continued to feed her baby. Tourists on this road often feed monkeys, which alters their food choices, habitat and behaviour, exposing them to accidents.

She was one of the luckier animals. Exact data on roadkills and injuries is hard to find for India. Large mammal deaths are recorded, but the roadside deaths of smaller animals like macaques go unrecorded. Solutions like underpasses, speed limits, and warning signs exist, but not all are viable. 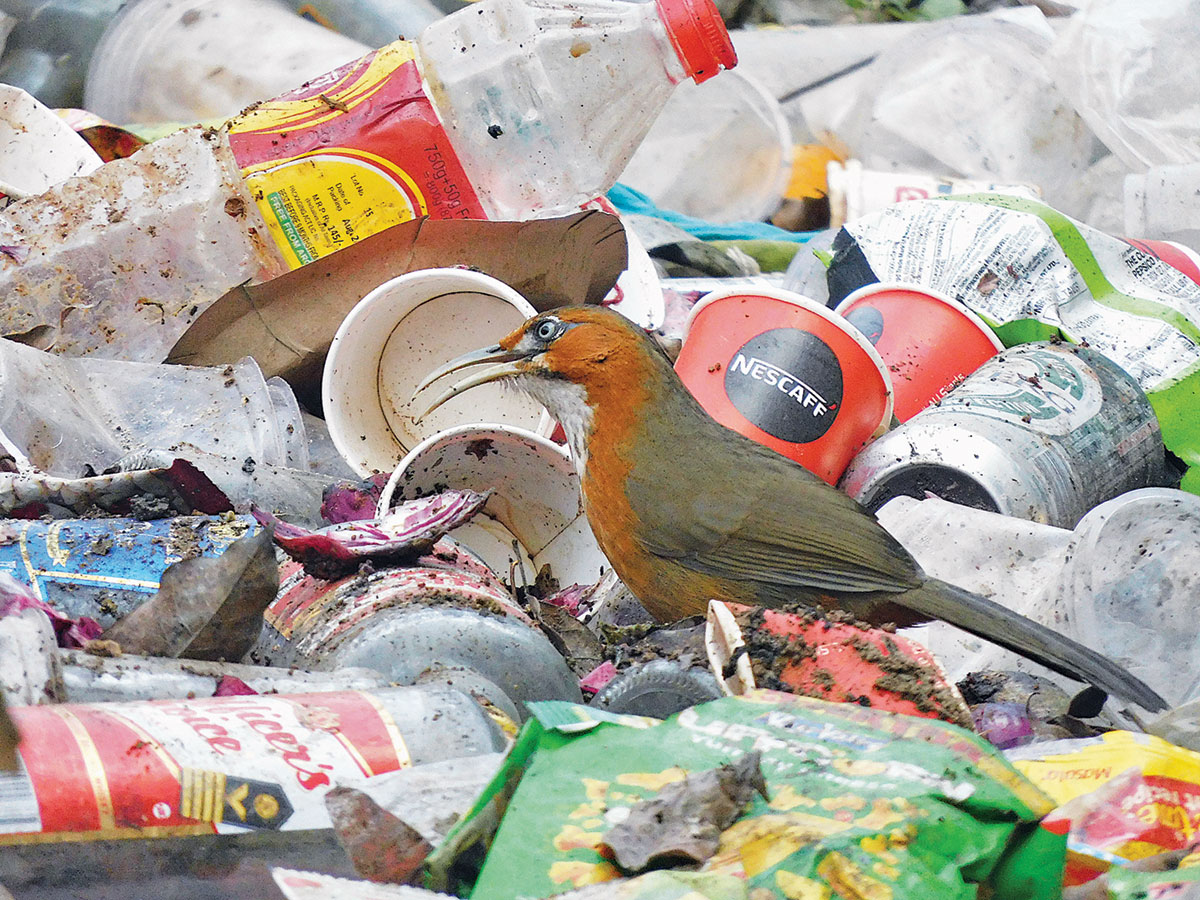 A rusty-cheeked Scimitar Babbler Pomatorhinus horsfieldii forages a pile of trash behind shops in Bhiri, Uttarakhand. This Himalayan bird is terrestrial, and is generally seen foraging on the ground, pecking in the leaf litter and undergrowth.

Apart from the obvious health impacts, scavenger birds, such as this babbler, could get stuck in the waste on items or choke on hard material. Segregation and proper disposal of waste thus becomes crucial for their health, not just ours. Since 2020, Sanctuary has been spreading awareness on the direct impact that improper waste management has on wildlife through the #InOurFilth campaign 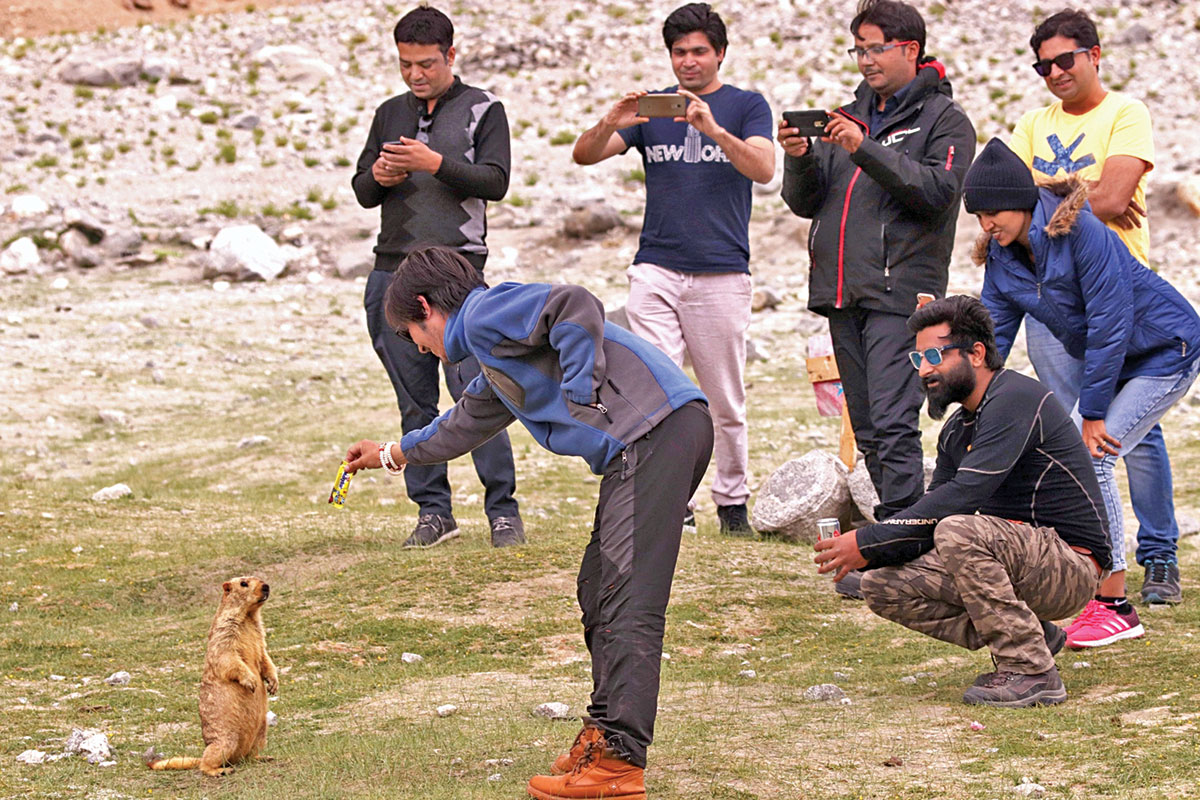 The Himalayan marmot Marmota himalayana and long-tailed marmot Marmota caudata, locally known as phia, are facing serious threats due to fatal exposure to tourists and vehicles in parts of Ladakh, particularly the Changthang region. These furry terrestrial rodents are lured out of their burrows during the summer with food by tourists and tour operators, disturbing their natural feeding habits and exposing them to disease and fatal accidents. They are also being killed for meat by migrant laborers from other states who work on road construction. This image was taken on the Tangtse-pangong route on July 8, 2017 in Changthang area.