How the Lockdown Threw 16 Million Fishers into Chaos

There are moments in a pandemic that beg the question – does anything even make sense anymore? This may have held true much before COVID-19 hit human life like a hurricane, but the virus has held up a mirror to our systems, urging a serious need to rethink whom it really benefits. The rapid spread of coronavirus is almost a high-pressure stress test for policy, welfare, and planning in India, and barring exceptions (I’m looking at you, Kerala), we’re not doing very well.

Under the 21-day lockdown (now extended to May 17) announced by the Indian government in March 2020 to contain the virus in a 1.3 billion strong population, this reflection paints a particularly painful picture. While a measure like this may be deemed necessary, it ended up having its own family of consequences. Newton’s third law, I guess.

While millions of migrant labourers struggled to make it back to their hometowns, another marginalised segment looked to its seas for answers. The fisher community in India faced and continues to face hurdles that it could have never prepared for under already-difficult socio-economic conditions.

With a sudden lockdown of all fishing, fish trading, storage, refrigeration, and selling activities, the entire fishing industry that is the source of livelihood to nearly 16 million people faced the prospect of severe health risk, stranding, loss of income, and starvation. 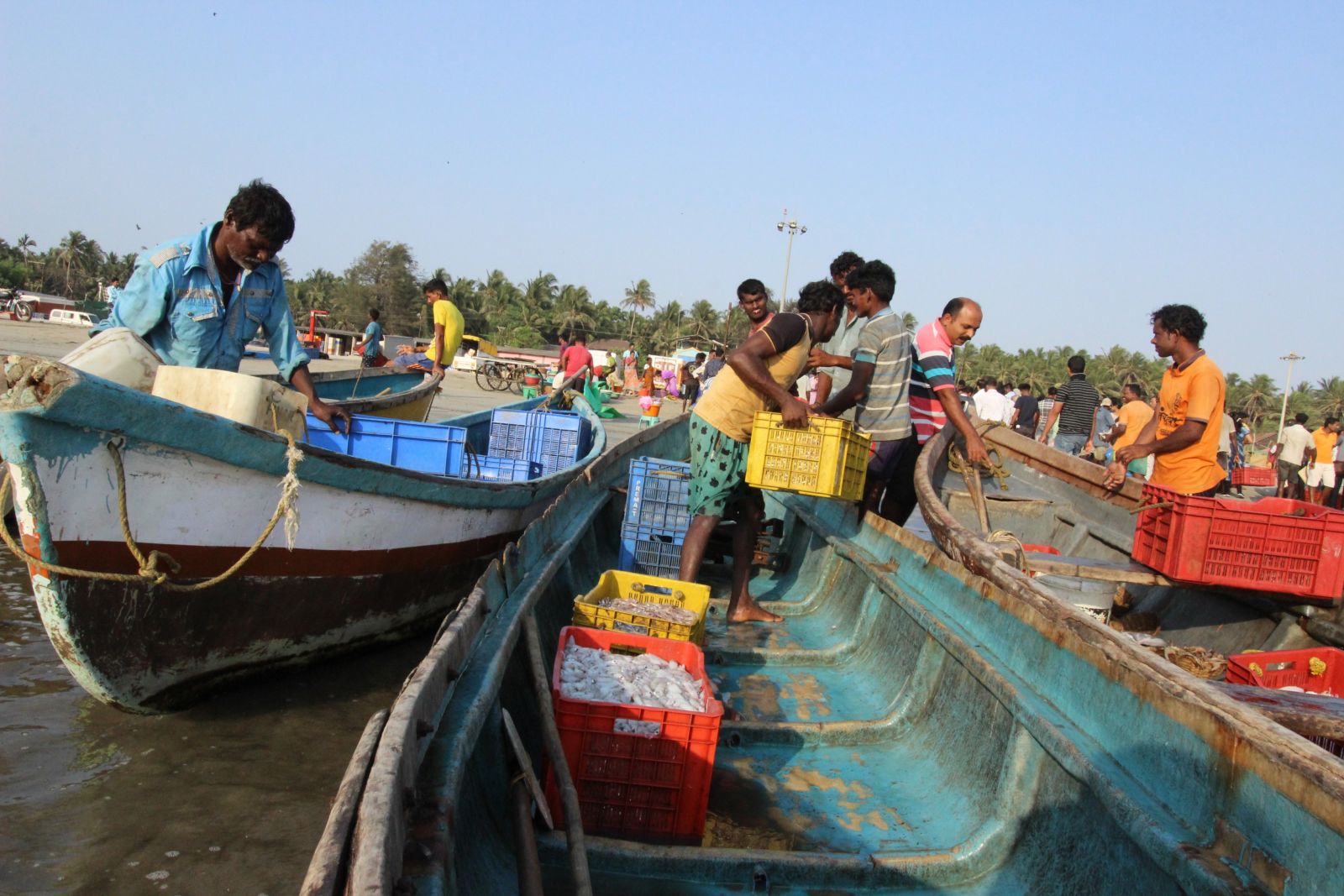 The common image of what constitutes fishermen or fisherwomen is that of people who go out into the sea to catch fish. While they are crucial to the trade for obvious reasons, the fishing industry depends on multiple forms of labour. This includes unloaders, migrant workers in storage facilities, boat suppliers, middlemen, market handlers, exporters, fish sellers, aquaculture farmers, and others involved in this complex trade. The abrupt lockdown put every single one of them in different stages of peril – some with regard to the future of the trade and many with regard to their very survival.

Plenty of fish (back) in the sea

Although fish was declared an essential commodity in the lockdown, a 45-day ban imposed on fishing, along with lack of transportation, meant there was absolutely no means to supply fish. To top it off, ice was declared a non-essential commodity, an irony that is not lost on fishers who heavily depend on ice storage. The unavailability of ice along with storage facilities being forcibly shut pushed fishers to take a measure they would have given a hand and leg to avoid – they dumped their catch back into the sea.

Reportedly, 15,000 metric tonnes of fish were emptied out into the sea by the second week of April. The scale of this loss has been unheard of in recent times, according to the National Fishworkers’ Forum (NFF). Ganesh Nakhawa, chairman of National Purse Seine Fishermen Welfare Association (NPSFWA) told the Hindustan Times that he estimates a Rs. 1000 crore loss for the fisheries industry, a significant portion of which is likely to incur in Maharashtra alone.

Dumping catch back under non-lockdown circumstances only happens with discards from trawling. The scale of this dump is miniscule compared to the loss incurred by dumping viable fish back into the sea. 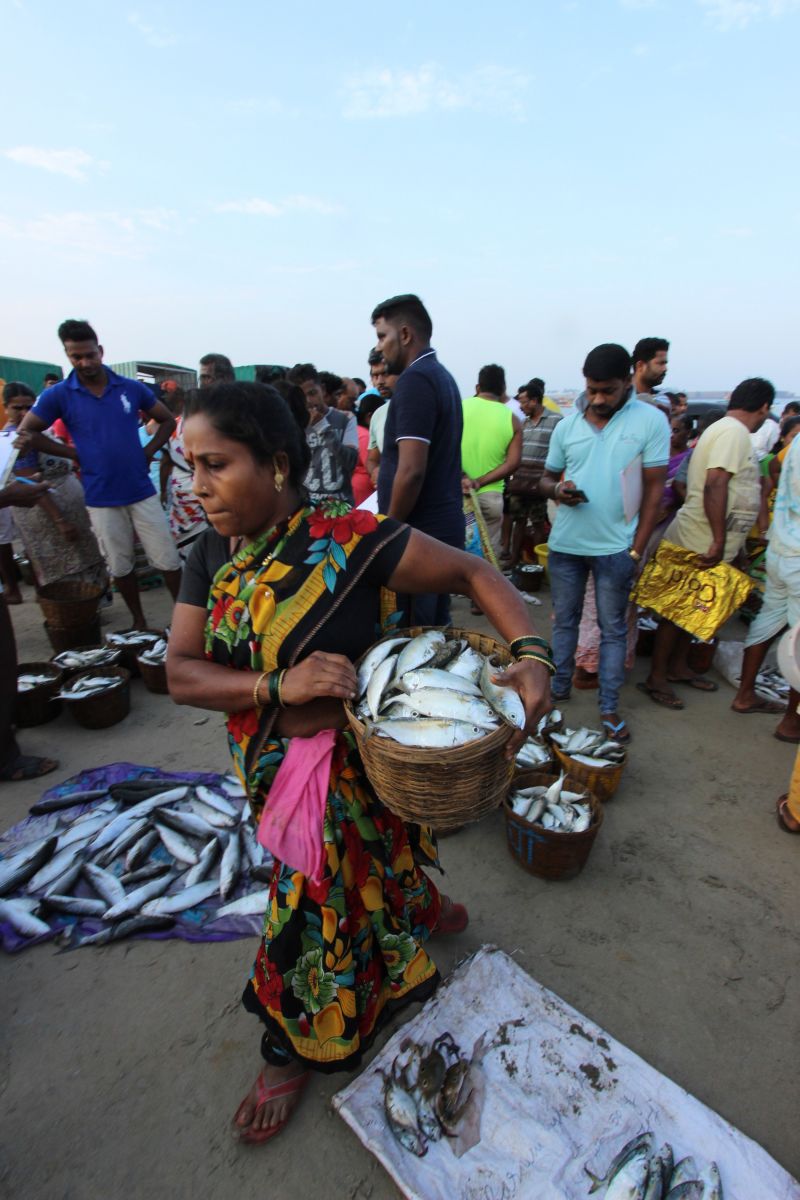 While one portion of fishers face loss of livelihood, another faces the possibility of starvation due to stranding. Due to the lockdown, hundreds of fishers were not allowed to dock and deboard their boats. According to a report, three Gujarat ports held 25,000 fishers at sea while over 4000 fishers were anchored in Mangaluru, Karnataka.

In a desperate move, 27 fishers who had sailed to Chennai, Tamil Nadu, hurried back to the shores of their hometown, the Srikakulam district in Andhra Pradesh. But they were not allowed to deboard and continue to be stranded at sea. Across the states of Goa, West Bengal, Maharashtra, Kerala, Andhra Pradesh, Tamil Nadu, Gujarat, and Karnataka, fishermen faced several health risks, mental health deterioration, lack of food, and hygiene issues.

Moments of respite in the stranding news cycle were provided by information that the Navy had managed to rescue 10 fishermen stranded without fuel off the coast of Kochi, Kerala. Along with this, on April 13, the Supreme Court heard the plea to bring home 860 fishermen from Kerala stranded in Iran. These are minor, insufficient steps to bring respite to the fisher populace stranded without amenities across coastal India, and in international waters.

Amid this chaos, activists and NGOs have been working to provide fishers access to food, ration, safety, and healthcare. Dakshin Foundation, an NGO based in Bangalore, has put together a task force to advocate for fishers’ conditions and provide aid packages. It is also working on resolving stranding cases across coastal India. It has created a fundraiser to bring relief to the families of fishers in partnership with United Artists Association (UAA) in Odisha and SNEHA in Tamil Nadu.

The National Platform for Small Scale Fishworkers – Inland (NPSSFI) and the NFF have demanded that the government provide a financial relief package worth Rs. 15,000 per month for each fishworker’s household and family for three months.

Although the Ministry of Fisheries, Animal Husbandry and Dairying (MFAHD) has been working with activists to resolve this crisis, some parts of the process are unnecessarily cumbersome. For example, the MFAHD demanded the potential beneficiaries of relief packages have an AADHAR-linked bank account. Most daily wage fishers do not have bank accounts. These additional bureaucracies in the time of a pandemic are straining an already fragile situation.

Individually, activists like Vidya Dinker in Mangaluru, Siddharth Chakravarty in Goa, and Nityanand Jayaraman in Chennai are working closely to raise awareness about issues faced by fishers. Fishers’ unions in Goa, Andhra Pradesh, Kerala, Gujarat, West Bengal, Maharashtra, and Tamil Nadu have been providing NGOs with information on the ground.

Last week, a petition was filed to the MFAHD detailing the long list of issues faced by fishers across India. This petition was signed by numerous activists, NGOs, fishers’ unions, and local advocates.

There’s no question that living through a pandemic is a management challenge for any government. But shutting down the functioning of 16 million people by an announcement that hardly gave them four hours to prepare had harsh outcomes. Time would have been the biggest factor to help people prepare their resources, get home, create plans, appeal for subsidies. The sudden lockdown took away any of these options.

Although the government has lifted the ban on fishing on April 13, fishers now have three challenges to face instead of one; namely, living under a pandemic, stranding, and dealing with the damage incurred due to the sudden nature of the lockdown.

There is still no clarity on how the PM Cares fund is being used for fisheries. Fish was named an essential commodity at the beginning of the lockdown in March, but there were no guidelines provided by ministries on essential aspects regarding how fishing could be carried out under the circumstances. There were no demarcations on how produce could be auctioned, sold, transported, landed on sites for different markets.

Although the lockdown has caused severe damage to fishers and fisheries, it did what precipitous measures always do – point out the cracks we choose to overlook in an existing system.

The author is the Executive Editor of Current Conservation magazine, and her views are personal.