Our jeep bumped along a kutcha road some 3.5 km. past Rajbagh, a village situated on the Jammu-Pathankot highway. Our destination was the right bank of the river Ujh, 70 km. north-west of Jammu. Here lay the historic Jasrota fort, now in ruins, and around it some of the finest forests of the region. I was surveying an area which had only recently been earmarked for protection as the Jasrota Wildlife Sanctuary.

A herd of chital Axis axis broke cover from my right and hurtled across the road in front of our jeep. As I sat back, basking in the pleasure of this commonplace sighting, I thought to myself how very vital it was that such pockets of green receive protection from the plough, the scythe and the machines of our age. The area was once a humming, buzzing centre of activity, as the capital of the Jasrota Jagir. The late Maharaja of Jammu and Kashmir, recognising its potential declared it as a Game Reserve under the provisions of the old Game Act of 1942. When India attained its independence the management of the Park was transferred to the forest department which allowed concessions for the extraction of bamboo and firewood and also permitted villagers to graze livestock within the forest confines. It was only in 1984 that the responsibility of managing the 1,004-acre forest was handed over to the Jammu and Kashmir Department of Wildlife Protection. As can be imagined, we have our work cut out for us. Restoring the habitat to its old prime condition will not be easy, and social pressures from the surrounding areas are going to add to our burden. But these are the challenges our department thrives on.

As if to shake me from my thoughts, a flurry of feathers erupted from the shrubs with a shrill, raucous call. It was a red jungle fowl Gallus gallus, the precursor to all our domestic breeds. The large, handsome bird shared its home with the even grander peacock Pavo cristatus and the jungle bush quail Perdicula asiatica. The abundance of ground birds is totally dependent on the protection one is able to afford to their chosen habitat, particularly soon after nesting takes place.  Our direction was clear, we would concentrate on habitat protection as this would also automatically help the countless other vertebrate and invertebrate life forms that constitute any biotic environment. 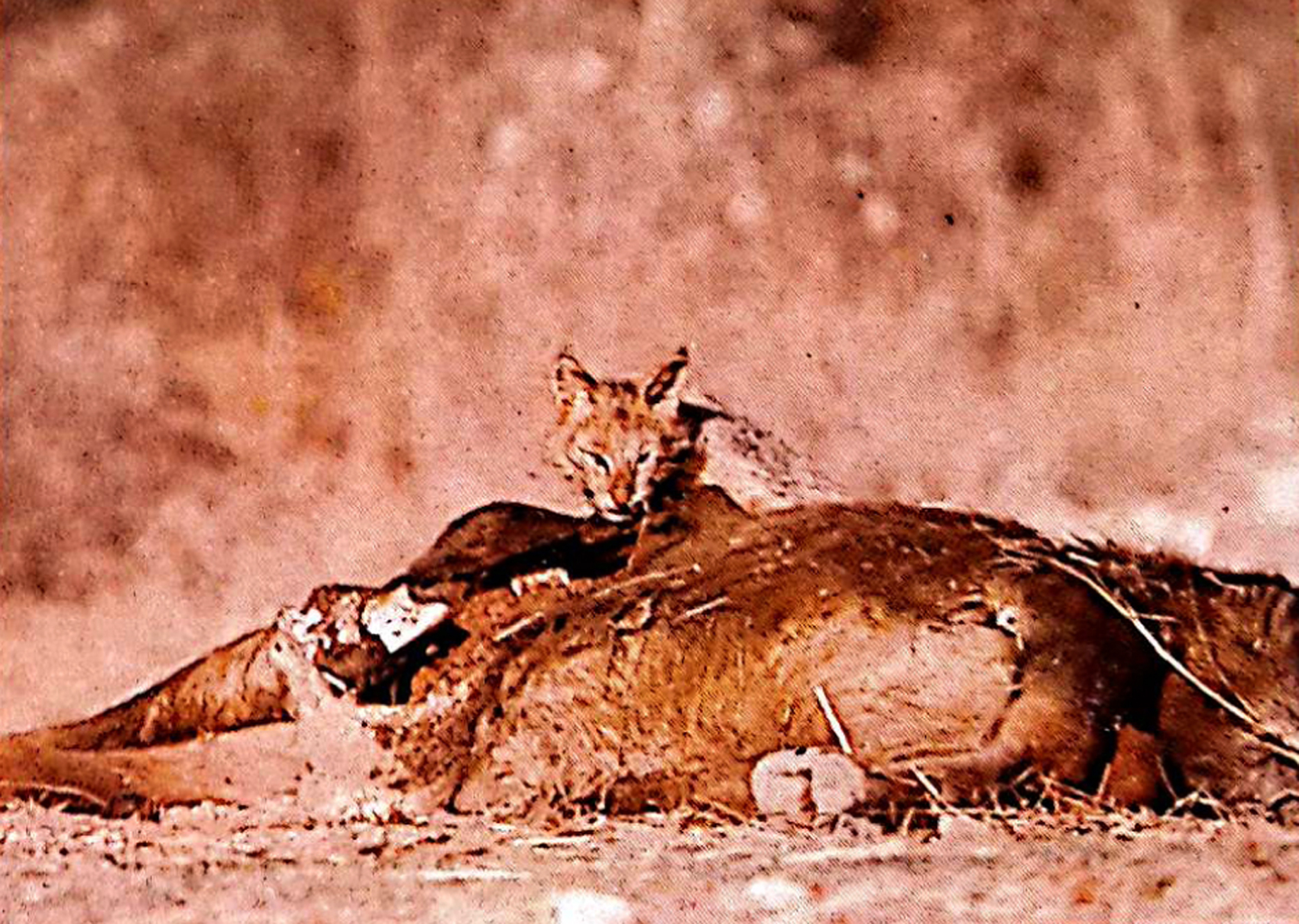 A jungle cat. Little over two feet with a tail about a foot long this long-legged, agile cat is a distinctive creature, has cold-looking pale, green eyes, and yellowish grey fur. It moves about during the day, much like a miniature version of a panther, preying on small mammals and birds. This cat is exceedingly strong for its size and very bold, being able to bring down prey much larger than itself.

For the Jasrota Wildlife Sanctuary we hope to implement management plans in a comprehensive, pragmatic fashion. We shall bring to the fore all the experience gleaned from the protection of the several other parks and sanctuaries in the state. We hope to avoid repeating past errors and to prevent the waste of scarce resources. To begin with, we intend to treat the people who live in the surrounding villages not as problems but as solutions integral to our plans. To the north of the sanctuary lie Guram surja, Mala taloti, Tibba, Furlein, Mun and Guram wala. To the south are Jasrota, Mala, Shani and Kuhampur. The areas belonging to these people will become the focus of our department's efforts to introduce wise land-use concepts. Controlled grazing, seasonal plantation of crops, biogas usage, seasonal grass-cutting and limited firewood collection (supervised by the department) are some of the methods by which we hope to improve the lives of the villagers. Such social uplift is bound to reduce the pressure on the limited resources of the sanctuary, and in the process both man and animal will benefit.

Our immediate problem, of course, is manpower. Currently, the area receives no more than the supervision of one forester and three guards -- a hopelessly inadequate force. Work is afoot to augment this force and we are confident that time and protection will eventually work in our favour. The usual problems that beset forests are at work here as well. Poachers have thus far had a field day. Our mere presence will deter most of them but we hope to prosecute habitual offenders in order to set a deterrent example for others. Indiscriminate grazing will be controlled to a large extent by fencing vulnerable areas. Grass-cutting will be done in a phased manner so as to augment the villagers' incomes and also to delineate fire lines, thus reducing the fire hazard to the area.

The Jasrota Sanctuary, in fact, is typical of the habitats to be found in the North Indian plains. Acacia catechu and Acacia arabica, typical dry zone plants can be found in association with shrubs such as Lantana camara, Carisa spinarum and climbers such as Bauhinia vahlii. The entire area is divided by the Daloti ridge. On one side of the ridge the flora and fauna have struck a good balance, and adequate wood cover is available to the denizens of the area. On the other side, however, where rich bamboo stands once reigned supreme, man's unwise attention has taken its toll. Degradation is obvious even to the untrained eye and here some amelioratory steps are definitely required. Native wild fruit and fodder plants will be reintroduced in a large way. Soil conservation steps such as the construction of check dams, and gully plugging will have to be undertaken. The ex-Maharaja had created some water points which have now silted up. These will be cleared and renovated and will eventually benefit the animals as well as the people of the region who have thus far been denied a perennial water supply. The ground cover, of Course, will help to further bind the soil and will eventually help to control the siltation taking place at the Ujh Barrage, which is today a heavy financial drain on the state.

To orient visitors to the sanctuary we shall be setting up a Nature Interpretation Centre, which will house specimens, to familiarise tourists with the types of life forms found in the forest. The Centre will possess an updated library, checklists of birds and animals present, visual aids and soon, a pre-recorded audio-visual programme on the natural heritage of Jammu and Kashmir.

As I mentioned earlier, we do not expect our task to be an easy one, but the rewards of such endeavours -- the sight of healing forests -- compensates for all kinds of hardships.