The Thattekad Bird Sanctuary, once described by Dr. Sálim Ali as “the richest bird habitat in peninsular India, comparable only with the eastern Himalayas”, lives up to its reputation even to date. Unknown to many was the fact that this tropical jungle’s avian repository was dominated for over three decades by a silent, introverted, pioneer bird guide, K.V. Eldhose, until his recent, untimely death.

Eldhose knew Thattekad like the back of his hand, and more so its denizens, especially the avian ones. He understood the behaviour (and whereabouts) of all resident and migratory birds – the region had its fair share of winter migrants. Though not formally trained to study birds, his passion,  love and the sheer intuitive understanding of them that he seemed to naturally possess, made him gain such expertise.

I will never forget my first meeting with Eldhose. On a rainy night in November 2006, we checked into our tents in a cocoa plantation. Back then, Eldhose operated this camp and we were looking forward to finally meeting the famed bird guide in the morning. However, Eldhose showed up in the middle of the night amid the torrential downpour, undeterred about being soaked. He genuinely enquired about our comfort while also making plans for the next day’s jaunt, so we would waste no time. Such was his commitment to birds and his clients.

While Eldhose’s confidence and natural history knowledge were apparent from the very first time I met him, what struck me most was his humility and unassuming nature. With a pleasant blend of self-assurance and modesty, he claimed, “300 species, including 110 South Indian endemics, in 10 days or money-back!” He ran this exact copy in advertisements in Birding Asia (published by the prestigious Oriental Bird Club) for many years!

And as a bird guide, his ability to show you difficult species was immeasurable, even though it required serious expeditions on foot in the jungle. Tracking Thattekad avian specialities with Eldhose are experiences that I will forever cherish. 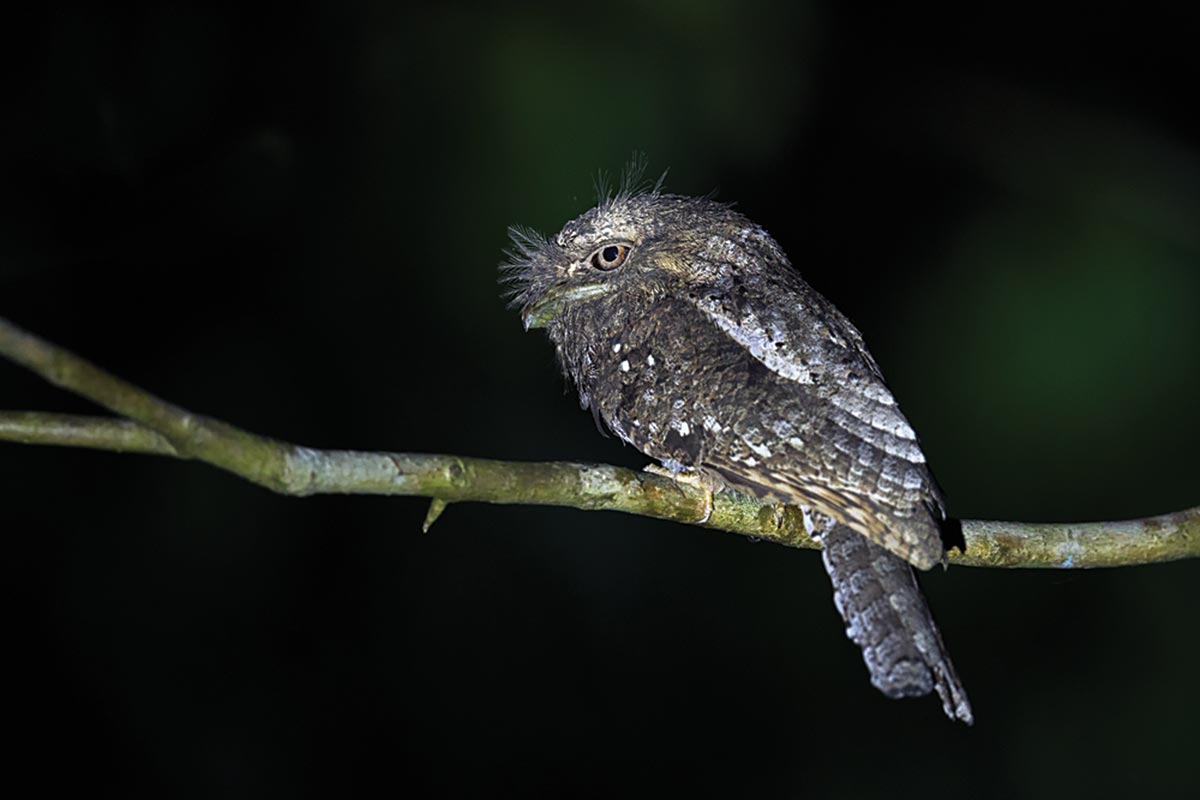 Since the early 2000s, Eldhose revealed to the birding community the ubiquitous nature of the Ceylon Frogmouth – in the right habitat, the bird is quite common! It is a resident bird confined to dense evergreen, humid, primary and secondary forests and dense bamboo. It is endemic to the Western Ghats and Sri Lanka. It was the bird’s magnificent camouflage that wouldn’t reveal itself. However, Eldhose would spot frogmouths just about anywhere and locate nests in the most unconventional of places – horizontal branches high up in trees, forest check post poles, and so on. During my very first afternoon with Eldhose, he ensured I saw and photographed three individuals! Those images are my most precious to this day. 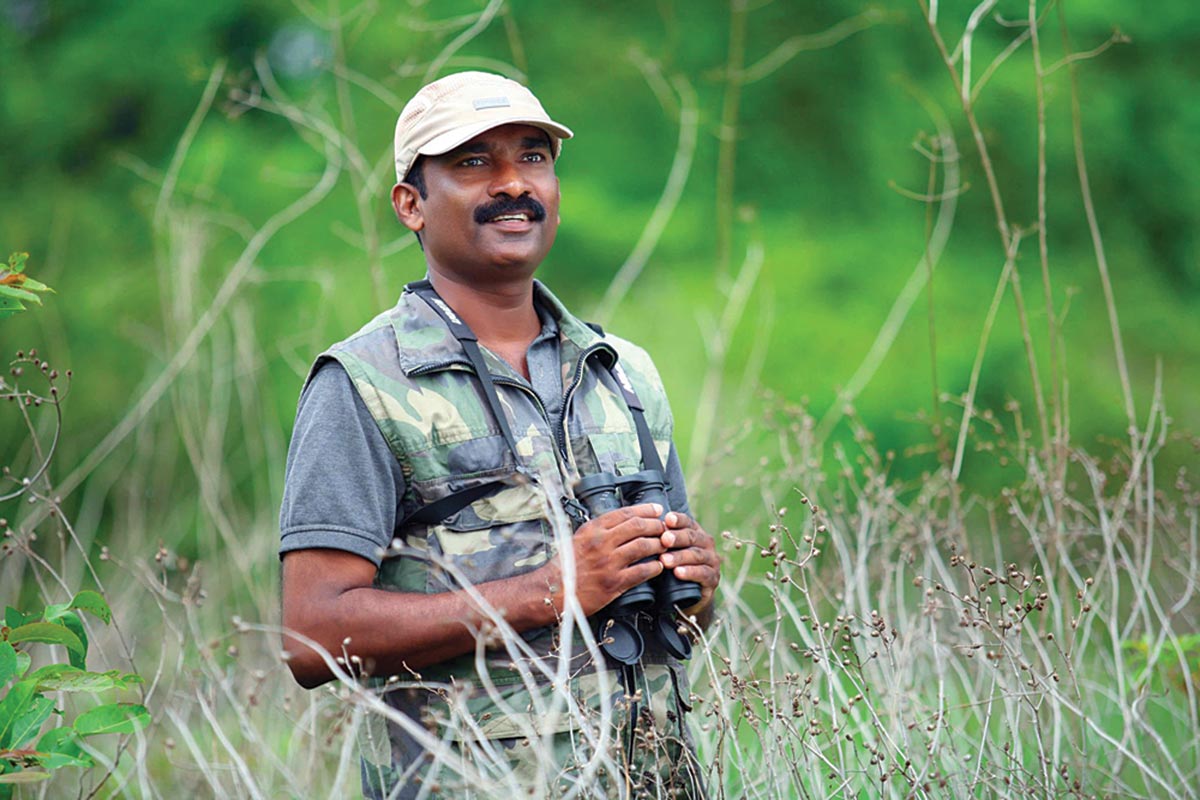 Eldhose’s assistance in identifying the habitat and nests of the elusive Rufous Woodpecker for the BBC series, ‘The Life of Birds’ in 1999 impressed Sir David Attenborough who gifted him a pair of binoculars and a pre-release copy of the series. Photo Courtesy: Ashy Eldhose.

Another species that eluded me was the Waynad Laughingthrush – the third of the (then) three endemic Western Ghats laughingthrushes. It’s been sliced and diced since (for non-birders, this refers to the renaming of species and subspecies)! Flocks varying from six to 15 – but sometimes as many as 40 – birds may be present together. They feed mainly on the ground, turning over leaves to find insects and fallen seeds or berries.

I had been trying to get an image of this bird in several places for many years but always returned without pressing the shutter even once. Since my last visit to Thattekad, Eldhose had repeatedly spotted a large flock near an old defunct railway tunnel in the glorious Idamalayar forests (in neighbouring Thattekad). It was here that we launched our pursuit. Finally, after a tiring half-day effort, with Eldhose leading the way, and a lot of crawling through dense undergrowth, I managed a series of interesting pictures. I highly doubt if I would have been able to obtain those views of this elusive bird if it was not for Eldhose. 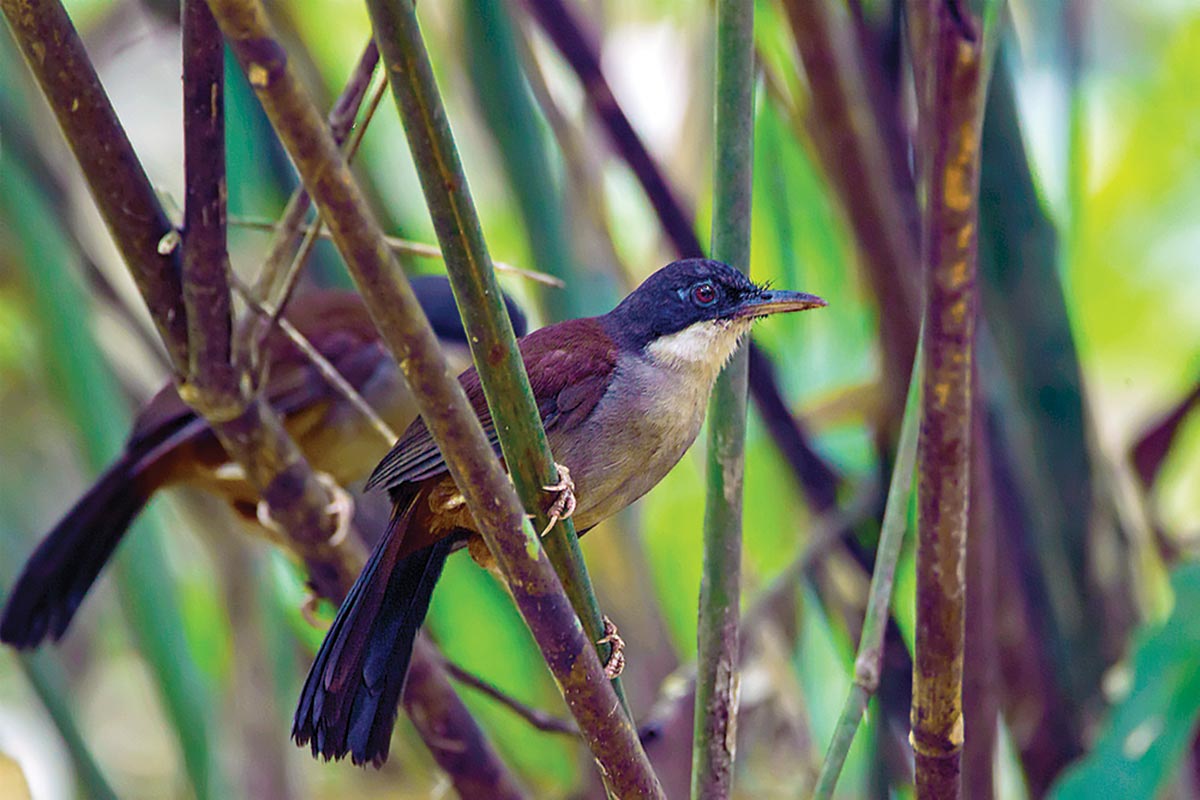 A pioneer and expert bird guide, Eldhose possessed a rich and intuitive knowledge of all resident and migratory birds found in the Thattekad Sanctuary. The author recalls how Eldhose had observed a flock of Waynad Laughingthrushes near a defunct railway track in Idamalayar forests, and guided the author to see this bird after years of waiting. Photo: Ramki Sreenivasan.

My search for the Ceylon Bay Owl is a story worth sharing for the sheer insight into Eldhose’s understanding of bird behaviour. The bird had been split from the Oriental Bay Owl and given a restricted range of Western Ghats and Sri Lanka, plus a new name. This made the bird a new species and hence special (cheap thrills to a birder!).

A miraculous owl that is almost identical to the frogmouth in behaviour, the bird settles down to roost very early in the morning and stays motionless on a low perch the entire day. Because it is difficult to spot, Eldhose painstakingly devised a process by thoroughly understanding the bird’s behaviour and actions. We set off at 3 a.m. to a dense forest patch, which he knew housed these owls. Just as we were reaching the area, we heard not one but two Bay Owls nearby, calling to each other. We tried to get as close as possible to the owls and noted their approximate location. We then got back to the car and slept until daybreak. At dawn, we picked up the trail and our job now was to actually spot the birds. This is easier said than done for most people, but not for Eldhose. Before long, we were watching a beautiful Ceylon Bay Owl in blissful sleep as the sunlight cut softly through another brilliant Thattekad dawn. 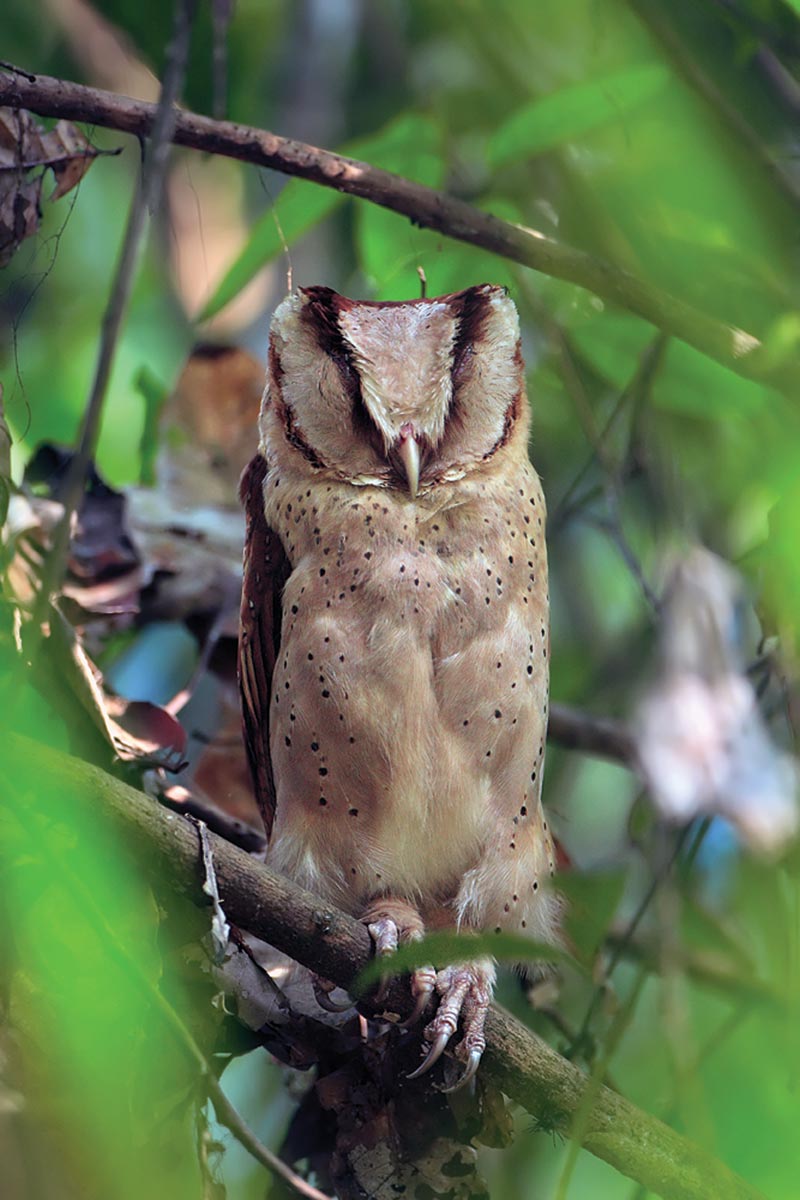 A pioneer and expert bird guide, Eldhose possessed a rich and intuitive knowledge of all resident and migratory birds found in the Thattekad Sanctuary. Similarly, Eldhose’s extensive studies of the behaviour of the Ceylon Bay Owl led him and the author to a precious sighting of this bird. Photo: Ramki Sreenivasan.

These are only some memories of my birding forays with Eldhose, out of the several dozens. I make several trips every year, chasing different species, each one a different experience. But time spent with Eldhose, his passion for birds, his knowledge about them; the never-ending discussions about bird calls, behaviour, and habitat... his humility, his patience, his observation skills, and his genuine concern for his guests will always remain close to me.

I especially strive to document  rare birds, as they desperately need spokespersons. I hope these accounts will give the reader an idea of the diversity of our birdlife. If future generations are to continue to enjoy these feathered creatures, we all have a responsibility to ensure that they endure and thrive.