Kanha, Teeming with Wildlife, not Tourists

We had just entered the Kanha National Park from the Khatia gate. Almost immediately, in front of us was the largest gathering of wild pigs I had ever seen. We also saw chital herds and a large, joint family of bison dressed for the party in immaculate white stockings. It was evident at the very outset that much like Tadoba, a national park that I have often visited, this park too had a healthy prey base that could sustain a large population of predators.

Tadoba and Kanha are two national parks that are both extremely rich in wildlife. But I find a marked difference between the two. Tadoba seems to be teeming with tourists while Kanha’s tourists are more well distributed rather than flocking around a sighting. This was surprising to me given that Kanha is more widely known as a tiger reserve. When a tiger, leopard or a bear is sighted in Tadoba, the news spreads like a forest fire, and soon scores of jeeps begin converging on the spot, which stresses the animals. In Kanha, on the other hand, guides are strictly prohibited from carrying mobile phones. News of having spotted big game is communicated only when the jeeps meet much later, giving the animals much-needed peace. 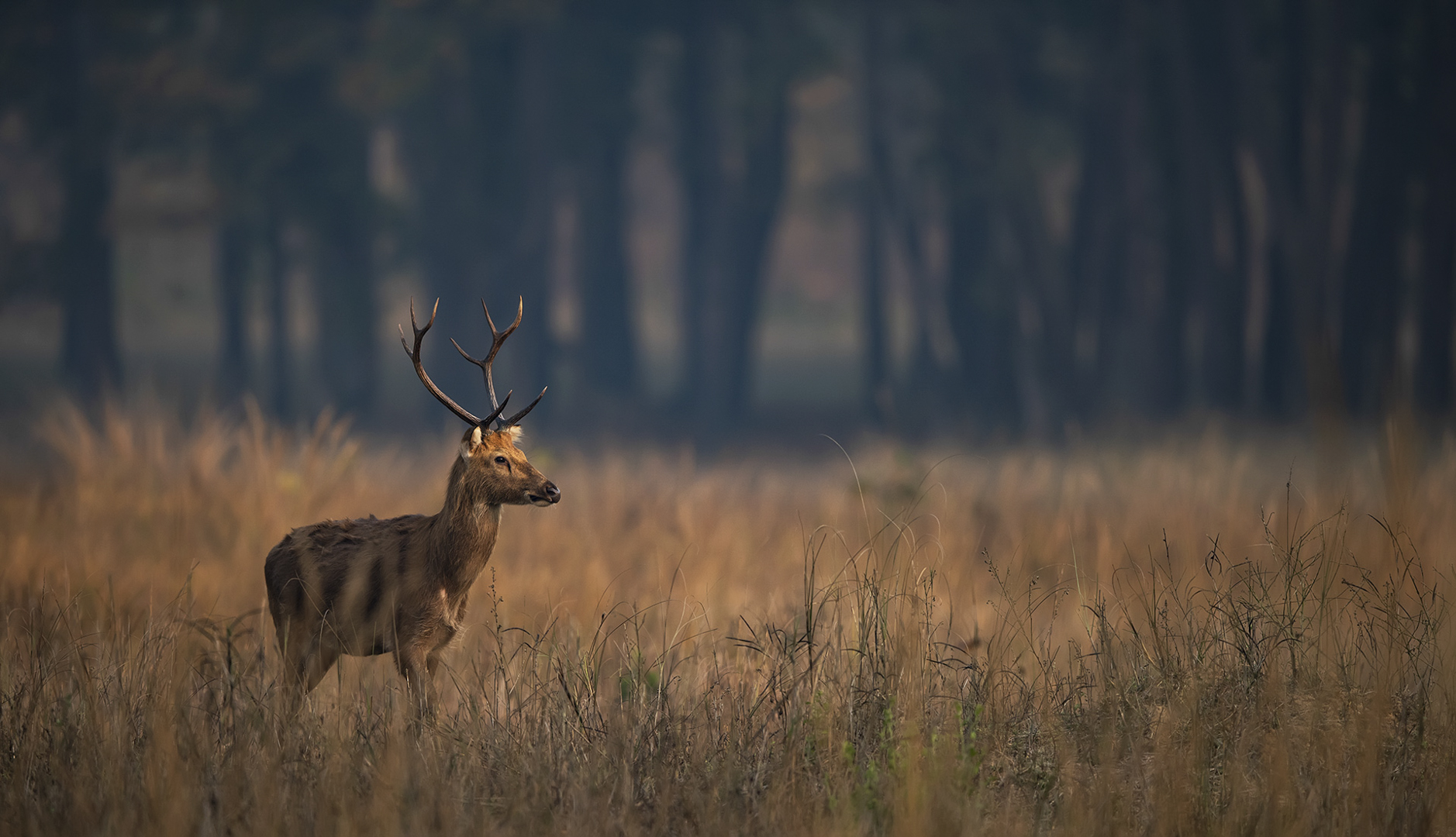 A barasingha male, sporting majestic antlers, surveys his grassland home in the Kanha National Park. Also known as the hard ground swamp deer, the species was brought back from the brink of extinction by the concerted action of a few who protected its home, under the mantle of Project Tiger. Photo: Abhilash Kar.

Lakhan, our driver-cum-guide in Kanha, was tiger-centric – perhaps an ‘occupational hazard’ of working in a tiger reserve! But he soon realised I wasn’t one who would miss the forest for the tiger. So, he pointed out a hole on a tendua tree in which a Collared Owlet suffering from insomnia was staring at us, one-eyed.

Ahead of us in a clearing was a herd of barasingha deer some dozing, others alert and facing different directions to spot and pre-empt possible predator attacks. Lakhan told us that Kanha has the distinction of saving this rare subspecies of barasingha that had adapted to living on hard ground (their usual habitat is swamps). Committed conservation efforts have increased their numbers from a precarious 66 in 1970 to over 800 (Sanctuary article link) today. So proud were forest officials of their efforts that Kanha became the first national park in India to have an official mascot: Bhoorsingh, the barasingha!

At the next fork in the road Lakhan chose to turn left. To our delight, there before us, walking right ahead of us in the middle of the road, was a full-grown male tiger. We drove behind him, keeping a respectable distance, until he turned and disappeared into his dense jungle. 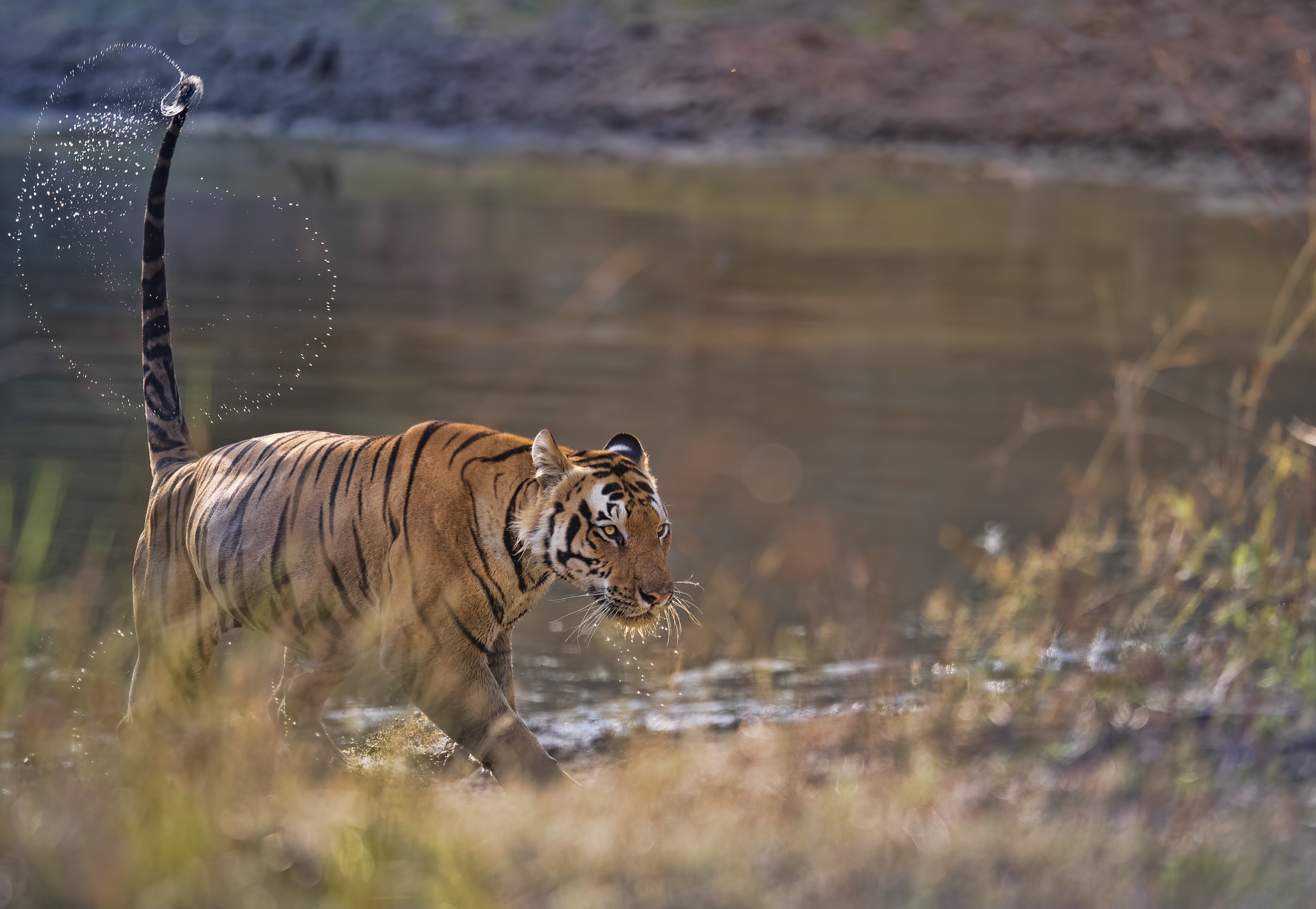 A tiger emerges from a pool. The magic of the tiger is undeniable but the Kanha Forest Department is doing a good job of managing the expectations of visitors, while regulating and guiding them to enjoy the park without crowding around tiger sightings. Photo: Aman Wilson.

Lakhan shared the story of this tiger named Collarwala. During a storm five years ago, he was found as a cub near a stream, unconscious. The forest staff hand-reared him and in due course released him in the forest, albeit with a collar. Though his collar dropped off somewhere along the way, the name remained. Collarwala was a nomad among tigers. With no territory of his own, he would amble into anyone else’s. When we crossed paths, his body language was of an extremely wary animal. This had become a part of his character as he was invariably expecting to be challenged at every step. But in the five years of his existence, no tiger ever attacked him. Our jeep was the only one that sighted Collarwala that day.

A little later, my granddaughter Arundhati made the first animal spotting of her life. She screamed, “Achache, a giant lizard!” To the adults in the group, it was a monitor lizard. An alert barking deer stood under a mahua tree. As if to confirm its identity, it let out its distinctive alarm bark. In the distance, two male chital sparred.  Male naturally drop their antlers each year prior to the breeding season… earlier if one is lost while sparring.

We also visited the beautifully conceived and executed Interpretation Centre where we enjoyed a light and sound show that dramatically showcased Kanha’s wildlife in all seasons. We walked over an interactive map of Kanha displayed under a glass floor. As we walked, the tiles we stepped on lit up and key information about that zone was displayed.

The next day, we explored the grasslands of Kanha. The nomadic Baigas once lived here in perfect harmony with nature. In bygone days their rulers held sway over the entire Kanha region for five centuries, until they were defeated by the Marathas. In the last five decades though, the Baigas were relocated to small towns, to give them better access to basic amenities. But the move cut the umbilical cord that connected them to their mother forest for millennia. It was a cruel blow, but belatedly, efforts are being made to offer them livelihoods to allow them the sustainability and dignity that is their right.

In the sweltering heat of the afternoon, we saw a troop of langurs sitting under a massive sal tree, embracing it. For a moment, I thought they were engaged in a Chipko Andolan of sorts. But Lakhan told us the real reason for this strange behaviour. Sal trees pull up a lot of ground water, and therefore the base of the tree is very cool. Langurs hug the bottom of the tree to cool themselves.

Soon after, we witnessed Kanha's trackers in action. Jham Singh, our forest guide, heard simultaneous alarm calls from two different directions. Using these coordinates and his finely honed intuition, he pin-pointed the exact location and whispered, “There!” Lo and behold… the head of a tiger popped out as it strode majestically across its grassy haven. Only two jeeps witnessed the spectacle, sparing the animal the stress of being hounded by hundreds of peering eyes seated in over a score vehicles.

Through our entire trip we did not spot the plague that afflicts tourism destinations -- plastic litter. When Lakhan did find one lone, carelessly disposed litter he stopped the vehicle, picked it up, and carried it back to “civilisation”. On our return, we saw a herd of Indian bison seemingly attending an urgent meeting right on the road. Since they had the right of way, we waited patiently. This delayed our return by four minutes. The forest gate opens on the dot of 5.30 a.m., and shuts at 6.50 in the evening. We reached four minutes late and explained how the gaur had blocked our path, and showed them our video with the timestamp. They nevertheless requested us to hand over a letter for their records.

We left with much respect and appreciation for the polite, disciplined strictness shown. It is only such attitudes towards nature that can save whatever green spaces that are still surviving on our beautiful blue planet.

C. Gangadharan Menon worked as a school teacher, journalist, theatre actor, theatre director, film actor, and documentary film maker before joining advertising. He then worked as a copywriter and creative director for 28  years in various agencies, including Trikaya, Rediffusion, Ogilvy and Mather, Mudra and McCann Erickson. He has won over 50 national and international awards, including Clio, New York Festivals, and London International Awards.