Life as a Brokpa

Throughout my travels across western Arunachal Pradesh, one thing that remained consistent was my craving for local ghee and chhurpi (local cheese). As soon as you enter the Mon tribal lands, you’ll start spotting strings of chhurpi dangling outside shops and above cash counters. Pastoralism is an essential but dying means of living. Milk, chhurpi, ghee and meat have huge cultural and religious significance, and are in high demand locally.

Brokpa, or herders and pastoralists, travel hundreds of kilometres across the high altitude grazing grounds in every year with their livestock (yak and a mixed breed of yak and cow) in search of pastures. On one of my field visits to West Kameng, I was fortunate enough to meet Tenzin Droka, a 55-year-old Brokpa from Nyukmadung village. The migratory nature of her livelihood keeps her away from the village from May to October, nearly half the year. From November to April, livestock is usually let out onto grazing grounds close to the village.

In May, Tenzin, her son and daughter-in-law begin their journey from Nyukmadung (2,300 masl) to Bhutan (4,000+ masl). They make stops that last two to three days in each grazing ground in the Nyukmadung community forest, until they reach Bhutan. It takes them six to eight hours to reach a new grazing ground. 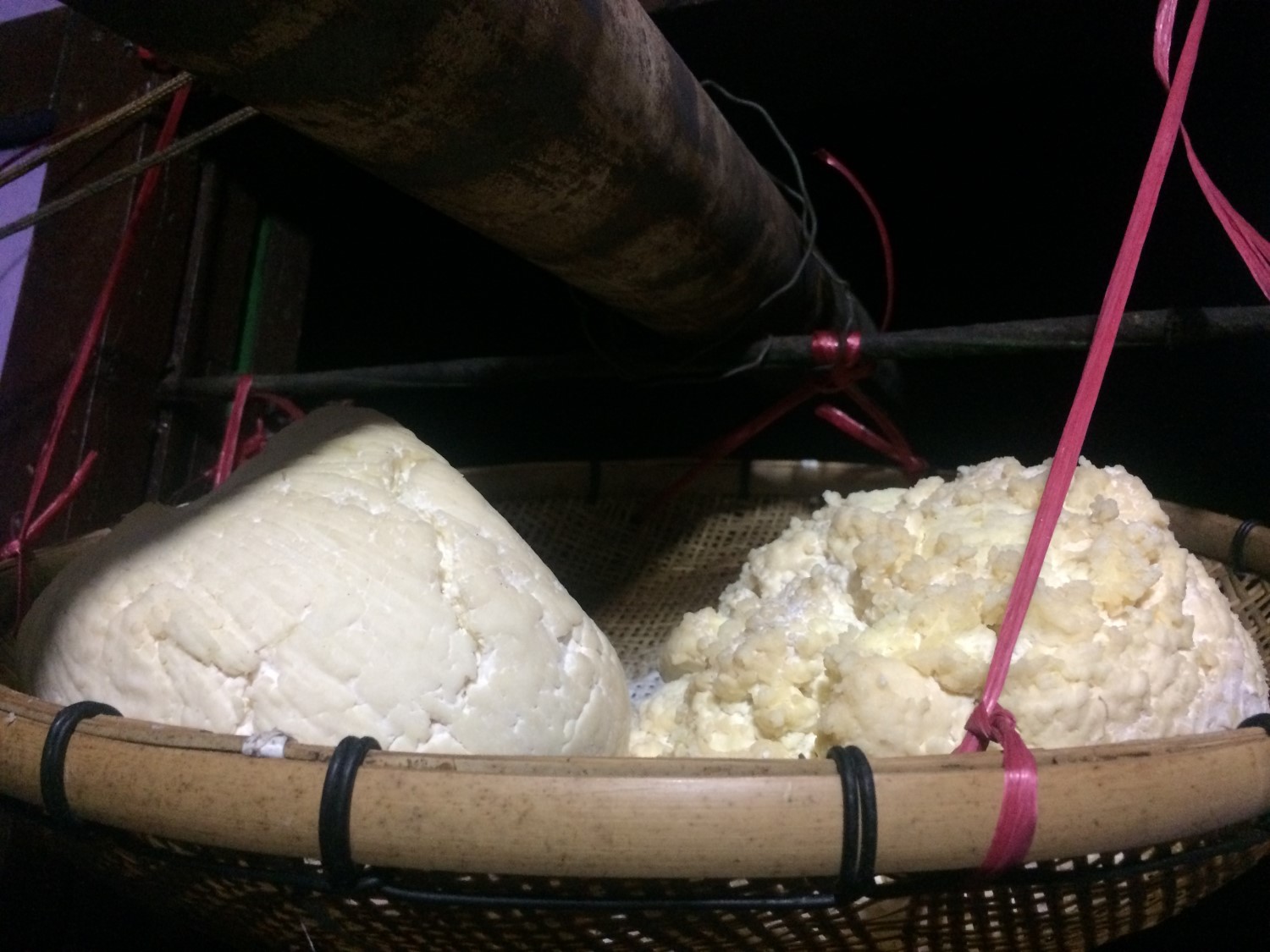 Chhurpi, a local variety of cheese that is highly sought after, is a major source of income for Brokpas. Photo: Manisha Kumari

Tenzin and her family cannot stay longer than their allotted time, to ensure that there’s enough fodder available for the grazers coming after them. “Every grazing ground has been assigned to a fixed number of Brokpa families. Three herding routes from Nyukmadung have been divided among the 12 families on the basis of their cattle type and number to avoid competition and ensure equitable distribution of the village’s forest resources. There are two other families using the same grazing route as ours.”

When I showed her Nyukmadung on Google Earth, her eyes lit up in excitement -- she had never seen her village from a bird’s eye view before! She took me on a most detailed virtual tour of her hand, identifying important forest areas, grazing grounds and streams. We traced our way from the village to the Indo-Bhutan border.

“Brokpas pay a tax for grazing grounds and forest resources to the respective community that owns the land, including those in Bhutan generally in Sakteng, eastern Bhutan. The tax, or rent, is dependent on our personal relationship we share with them. A day’s rent can amount to anything between INR 100 and INR 300,” says Tenzin, who sometimes also offers a few kilogrammes of nhangma (leaves and branches of chir pine) as payment. Chir pine, considered best among all fuelwood due to its lightness and water resistance, is difficult to find in the high altitude grazing grounds of Bhutan, and is an essential bargaining commodity. Tenzin often carries 10-15 kg. of nhangma on each journey.

The Bhutanese grazing grounds are surrounded by picturesque lakes that look mesmerizing even on Google Earth. However, Tenzin points out that on entering India through Bhagajang (4,000+ masl) in Tawang, one is surrounded by even larger high altitude lakes. The entire landscape at the Indo-Bhutan border is a treat to the eyes. Bhagajang is only a few days’ trek from Sela pass (4,170 m asl), where Tenzin and her family replenishes their rations from another family member from Nyukmadung. From Sela, Tenzin enters Senge, a pastoralist village between Nyukmadung and Sela.

“It is a breathtaking journey from Bhutan to Senge, but not an easy one. Some days, there would be encouraging clear skies above, but on other days, fog and rain would trap us at one of the grounds for longer than planned,” reminisces Tenzin. As the weather turns harsh and snow starts to fall, they take their livestock to lower elevations, closer to the village settlements until the next summer. The increasingly severe weather, owing to the climate crisis, poses an unpredictable threat to their way of life. 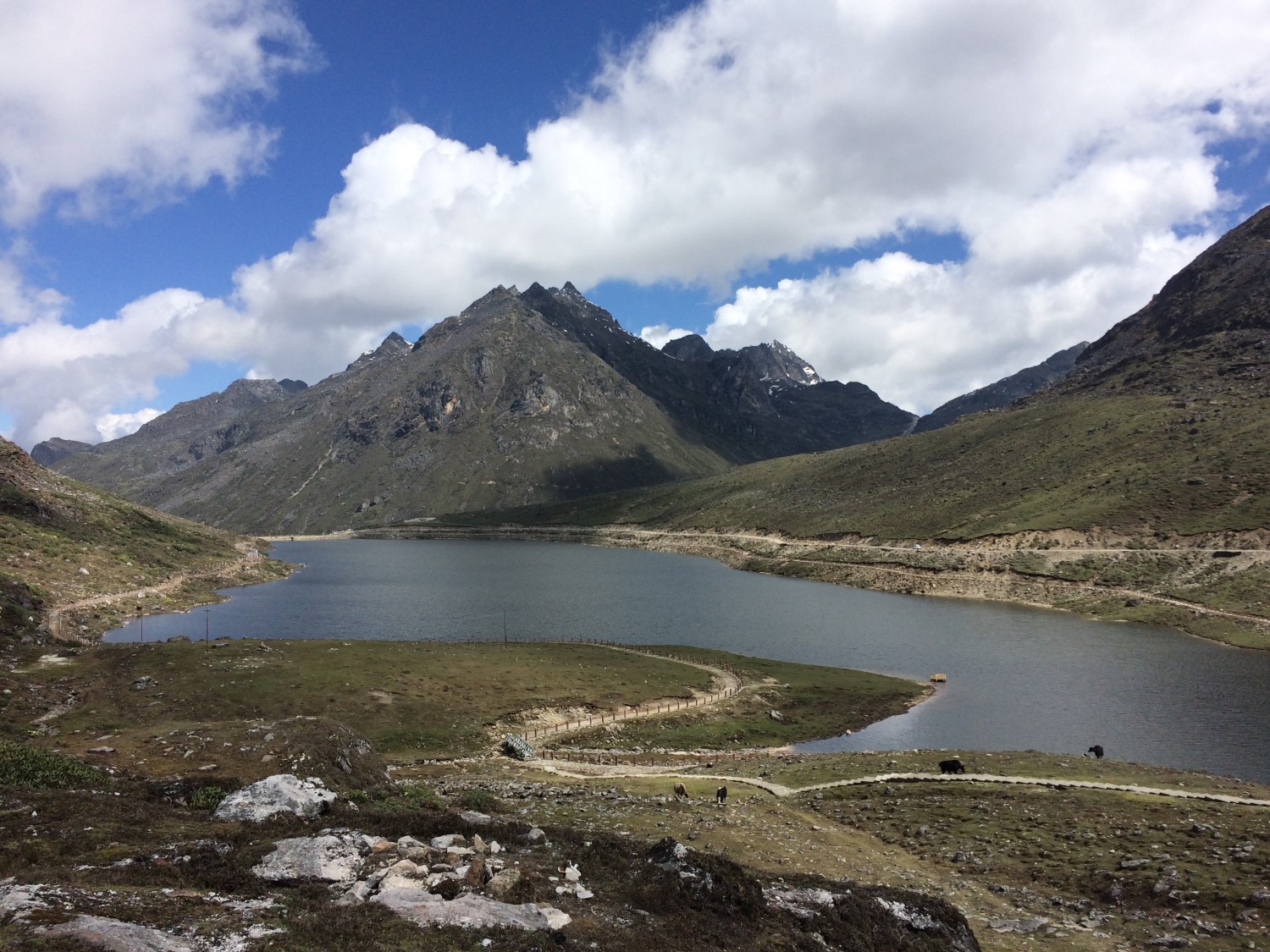 Each family member has their own responsibility during the journey. The men generally look after the livestock, while the women, if they are present, are responsible for setting up camp and cooking. During longer stops, families also engage in milking and processing. One person can usually milk 20 to 25 yaks in half a day! In Tenzin’s family, her husband and son do the milking while she and her daughter-in-law are tasked with processing the milk to make ghee and chhurpi. Clear weather, steady movement of yak and close proximity of makeshift camps to water sources are essential to a smooth day’s work. For Tenzin, walking through rough terrains and harsh climatic conditions while menstruating is especially challenging.

Apart from harsh weather, Brokpas also need to be wary of dholes that may attack livestock. Tenzin explained that the loss of livestock often causes Brokpas to resort to retaliatory killing, by the use of snares. The economic losses from this conflict are huge enough to provoke -- one yak calf may cost INR 15,000 and an adult can fetch INR 30,000 to INR 50,000. 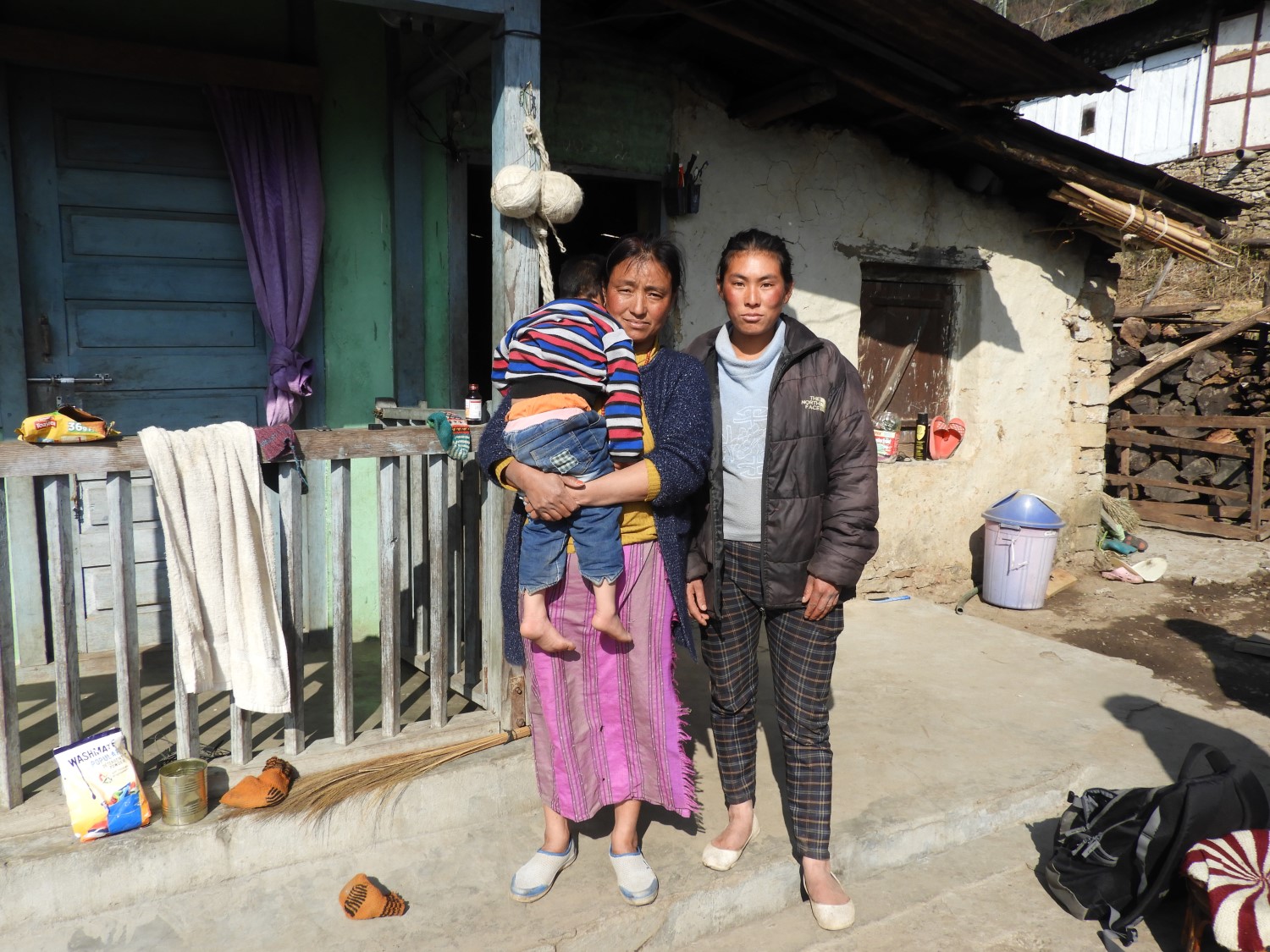 Tenzin, with her daughter-in-law and son. Photo: Manisha Kumari

The various hardships that come with pastoralism makes Tenzin hope that her children don’t become Brokpas. With a smile on her face she says, “The health and productivity of my livestock is directly dependent on the forests. And so is my happiness. Being a Brokpa is a very difficult life. I do not want my children to go through the same hardships which I am going through.”

Pastoralism as a livelihood is now threatened not only because of its despotic nature, but also thanks to habitat degradation. It is rooted in sustainable utilization of natural resources, and is a vital symbol of culture and lifestyle. The Brokpas possess immense traditional ecological knowledge of the forests, wildlife, grazing grounds and high altitude lakes, the kind that comes for a long, rich history.

As my conversation with Tenzin came to an end, a newfound respect and admiration for Brokpas swelled in me. Simple as they may seem, the ghee and chhurpi that fill local shops now became a stark reminder of their strength and struggles, part of not just a means of livelihood, but a way of life.

Manisha Kumari works as a Junior Project Fellow with WWF-India. She has been involved in commuity conservation initiatives in Arunachal Pradesh for over two years.