Going back to our school textbooks, the most prominent example of Darwins theory of natural selection was that of the peppered moth Biston betularia, which evolved a new black morph in the 1800s during the Industrial Revolution in the United Kingdom. It wiped out the original morph by the end of the 19th century. This was one of the earliest examples of human impact on wildlife and how some species evolve to survive adversity.

But how do we perceive moths now? To most people who are not moth aficionados, moths are perhaps ‘dark creatures from Hollywood thrillers (the symbolic Deaths-head hawkmoth in Silence of the Lambs), or drab insects hovering around lights! Yes, they are also known for their suicidal flight towards fire and as the less-appealing cousins of butterflies. Honestly, when I started out as a moth ecologist, I was more thrilled at the prospect of an ‘all expenses paid trip to explore the Himalaya, than studying moths. It has been a journey of three years since, and an adventure that has left me more and more intrigued by one of the ‘little things that run the world!

I have been working in the Nanda Devi Biosphere Reserve, trying to understand the diversity of moths using morphology and genetics. The steep rugged landscapes of the Nanda Devi National Park and the gentle rolling meadows of the Valley of Flowers National Park, both World Heritage Sites, have not been the subject of too much study. A transition zone between the Zanskar Range and the great Himalaya, this region is a mosaic of habitats and landscapes, which is responsible for its unique wildlife. The area is well-protected because of its inaccessibility, but threatened by natural disasters such as landslides and forest fires. It was hit by a devastating flash flood in 013, causing immense destruction o the forests and the people. It is lso fragmented by development projects, ever-increasing human settlements, and resource extraction from the forests. 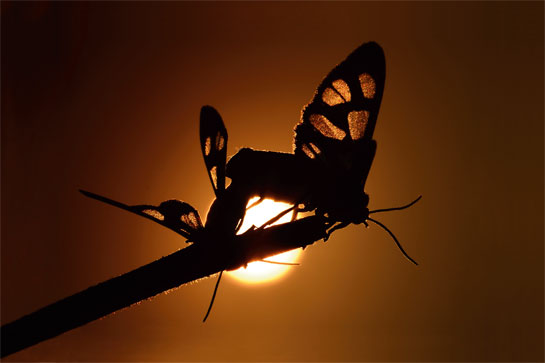 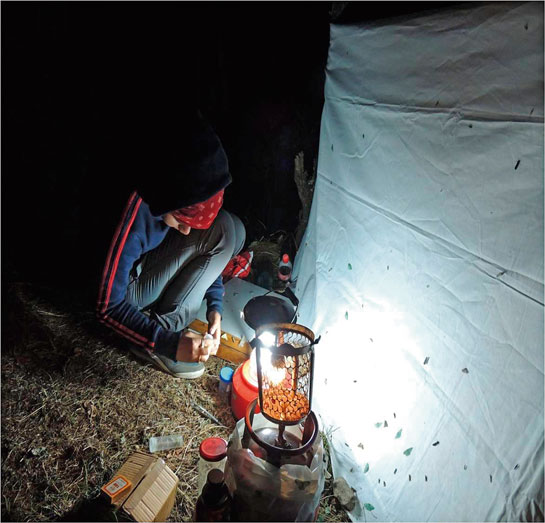 The world of moths

I studied moths using ‘light trapping at night, in the forest, well aware that a black bear or a leopard often lurked close by. My field assistants Dipu and Anoop bhaiyya - inquisitive and hardworking locals - would keep a lookout while I would search for moths. One night, Dipu and I heard a bear call within about 20 m. from the light trapping site. We hurriedly wrapped up everything and ran downhill until the calls became faint! Apart from guarding me, Dipu and Anoop bhaiyya shared my excitement at the discovery of every new moth. Anoop bhaiyya still calls me up to ask, “Koi naya species mila kya?" (Have you found any new species?). One of my rarest finds was Brahmaea wallichii or the Brahmin moth, which flew into my face and startled me with its enormous size. It has beautiful golden markings on its dark brown body. There are only two species of this genus known from India, the other one being B. hearseyi. 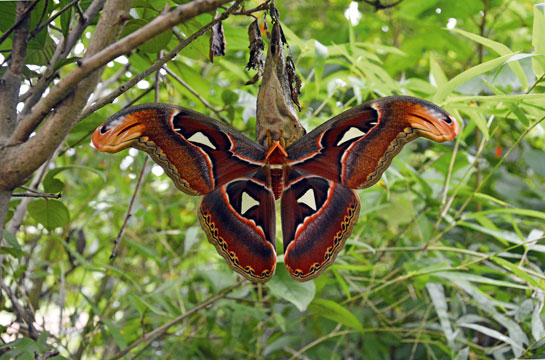 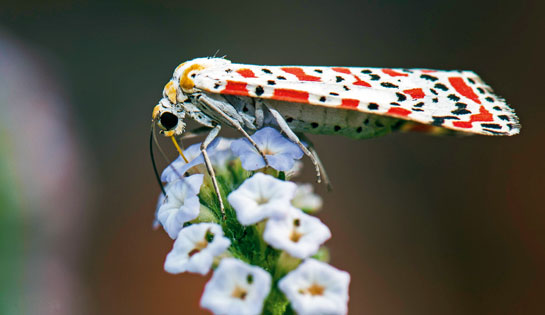 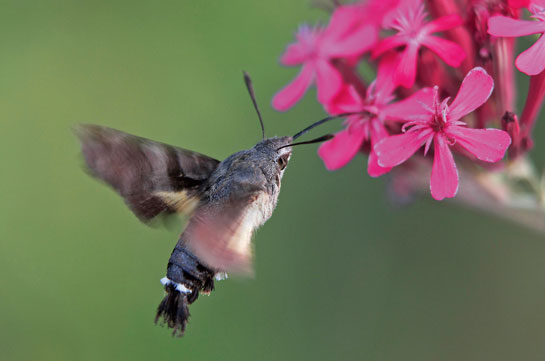 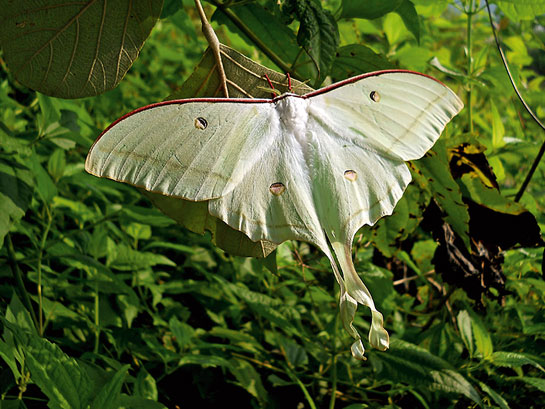 Despite what most people believe, moths are not found only at night. There are some day-flying moths, like the beautiful Burnet moth, which mimics butterflies with bright warning colouration, and the hummingbird hawk-moth, which hovers around flowers with a faint humming noise. Often in the daytime in Joshimath, near my basecamp, I would spot one hovering around and feeding on Calendula flowers. Moths are tiny powerhouses of a secret nocturnal world. Several moth species pollinate and feed on flowers, which reflect UV light (most night-blooming flowers). In 1907, scientists found that the moth Xanthopan morganii praedicta, which has an absurdly long proboscis, is the only pollinator of the African orchid Angraecum sesquipedale, which sports an unusually long nectary. It was named the Darwins moth, as he had predicted the existence of a then-unknown species of insect based on the size of the flower.

Moths are also major prey for nocturnal animals such as bats. Adult saturnids (silk moths), for example, dont feed, they just mate and get eaten by bats! The battle between the tiger moth species Bertholdia trigona and the big brown bat Eptesicus fuscus is conspicuous evidence of ‘sonar-jamming in nature. This tiger moth produces ultrasonic clicks to ‘confuse bats. Overtime, in the prey-predator arms race, both have evolved interesting acoustic weapons. Some moths adopt mimicry to avoid predation. These include moths of the Family Sesiidae and hornet moths, which mimic wasps. In moths from the genus Phalaera (Family Notodontidae), the head looks like the cut end of a tree branch. Owlet moths have eye-spots on their wings, resembling an owls eye effectively enough to scare away predators.

For eons, moths have evolved to orient their flight to celestial lights, but they now face challenges from our artificial lights.

Fundamental to terrestrial ecosystems and a potential ‘conservation tool, moths have been largely ignored in scientific studies. Moth taxonomy in India is shrouded in much uncertainty. Only fragmentary taxonomic records (Fauna of British India series by Hampson in the 1800s!) exist for moths from different parts of the country. So, how do we conserve them without understanding even a small fraction of their complex life histories, species interactions or populations?

During my time in the reserve, I interacted with the local Bhotiya people. Women, who mostly went into the forests to collect fuelwood or to graze cattle, live a simple life. They weave their own clothes, grow their own food and suffer little interference from the outside world. Once in Lata village, the woman of the house where I stayed invited me to a local version of a ‘ladies night out, where only women would cook, sing, dance and get high on the local liquor (homemade from wheat)! What a night that was! 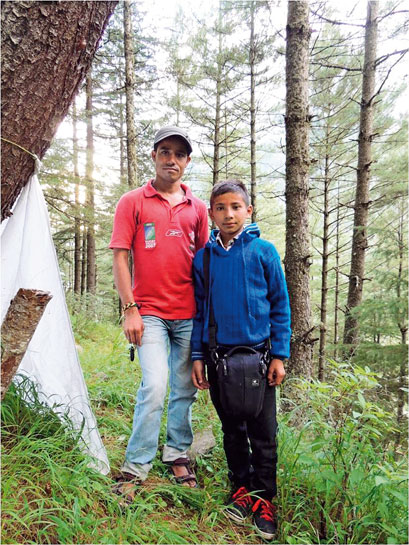 They took a keen interest in my work. When I tried to explain the purpose of my study to them, they wondered “sirf raat ko kyu?"(Why only at night?)! The children were also curious and concluded, “Arre, yeh toh raat wali titli hain" (Oh! They are the butterflies of the night). They would show me the moths that were attracted to the lights at their home and let me know how beautiful they think those are!

Adding to my ‘mothing experiences, I had some memorable encounters with other ‘non-moth wildlife. In my first year, I found a Royles pika burrow behind the tiny Forest Department hut in Auli at around 3,000 m. altitude. The little rodent was quite oblivious to human activities and would greet me every morning! On another day, I saw the mighty Himalayan Griffon feeding on a cow carcass within 10 m. of the same hut. My first sighting of the Himalayan goral was on a steep mountain on the other side of the river in the village Tolma. As my assistants and I were having a ‘throw-a-stone-across-the-river contest, I suddenly saw something moving on the cliff and there they were, a large herd - camouflaged and happily grazing. Once some local boys from Lata pointed out a Himalayan black bear on the opposite bank of the river in a forest near the village! Blue sheep and Himalayan tahrs were the usual sightings. Many ‘missed sightings happened too, usually when I would be recording vegetation data in the forest. While I tediously counted the herb and shrub species, Dipu would spot a barking deer or a leopard cat and even a Himalayan Monal just behind me, which would vanish as soon as I would turn around! Among birds, the Black-headed Jay, the Blue Whistling Thrush, the Yellow-billed Blue Magpie, the Common Rosefinch, the Great Barbet and the Verditer Flycatcher were common daily sightings. 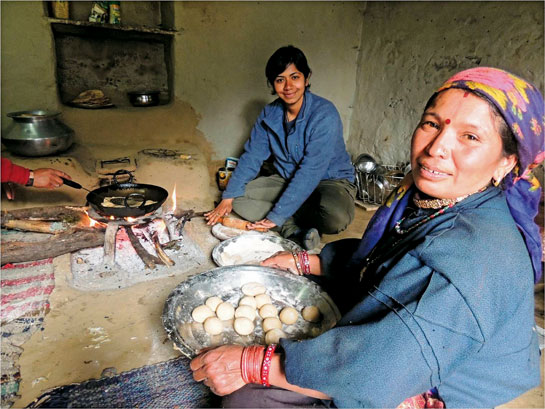 Through my study I have realised that moths are an important invertebrate group comprising fascinating overlooked diversity. If forests die, moths die. They are important indicators of forest health. Research on moth species from unexplored areas under dynamic and challenging conditions might provide much needed insight into extant diversity and past evolutionary scenarios.

We know so little about the world around us and even less about creatures of the night that are active when we are passive! I for one know what my calling is and moths are a huge part of that passion.