Mangar Bani And Other Forests

One may not associate wildlife with huge megalopolises, but nature does not recognise human boundaries and species will occupy the niches they can. Chetan Agarwal writes here about one such wilderness that exists surprisingly close to India’s bustling capital… New Delhi. 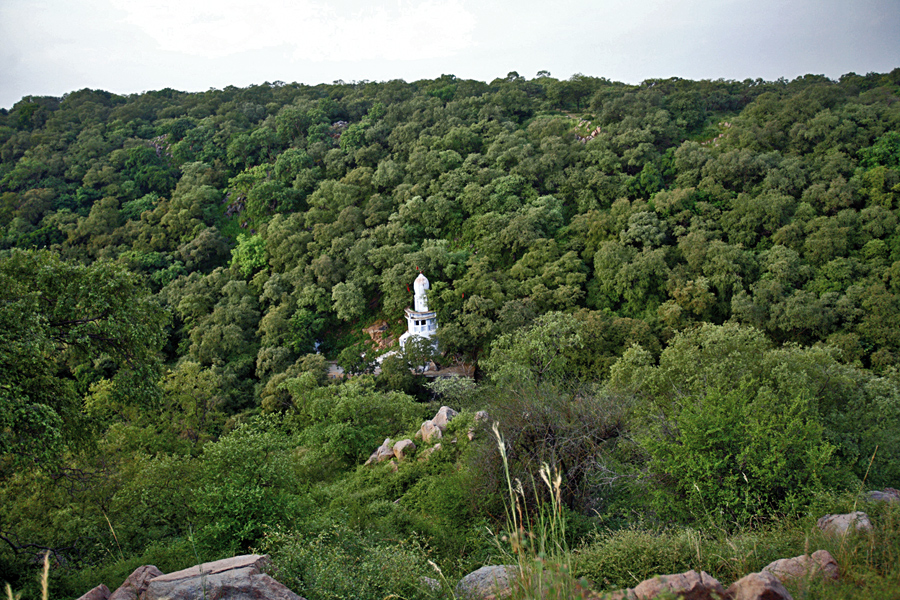 An hour’s drive from India’s bustling capital, Delhi, a 4,262 acre valley in the Aravallis, harbours the Mangar forest, a vital wildlife habitat, and yet, only a mere fraction of it is protected by law.

The village of Mangar nestles in a valley in the Aravalli hills at Faridabad. Bounded by the Asola Bhatti Wildlife Sanctuary (ABWLS) to the north and Gurugram to the west, Mangar is a vital wildlife habitat. Of its 4,262 acres, 3,810 acres are located in the Aravallis, and are classified as ‘gair mumkin pahar’ – which literally translates to ‘hills on which cultivation is not possible’.

These hills are forested and home to diverse wildlife. To the west is a ridgeline with Gurugram that forms a chicken neck, a crucial corridor for wildlife movement.The area is revered as the Mangar Bani sacred grove. Mangar is a central part of a continuous north-south stretch of Aravalli forests from Asola and Surajkund to the Damdama lake. Understandably, birdlife abounds here.

FORESTS BY THE BOOK?

Despite this rich wildlife presence, the Indian government has not listed the region as a forest, which has to be nurtured and protected. A mere 1,132 acres are notified under the Punjab Land Preservation Act, 1900 (PLPA), which the Supreme Court in 2002 and 2004 said must continue being afforded forest status, even if notifications had lapsed. The proposal to notify the entire 3,810 acres under the PLPA has been shelved. 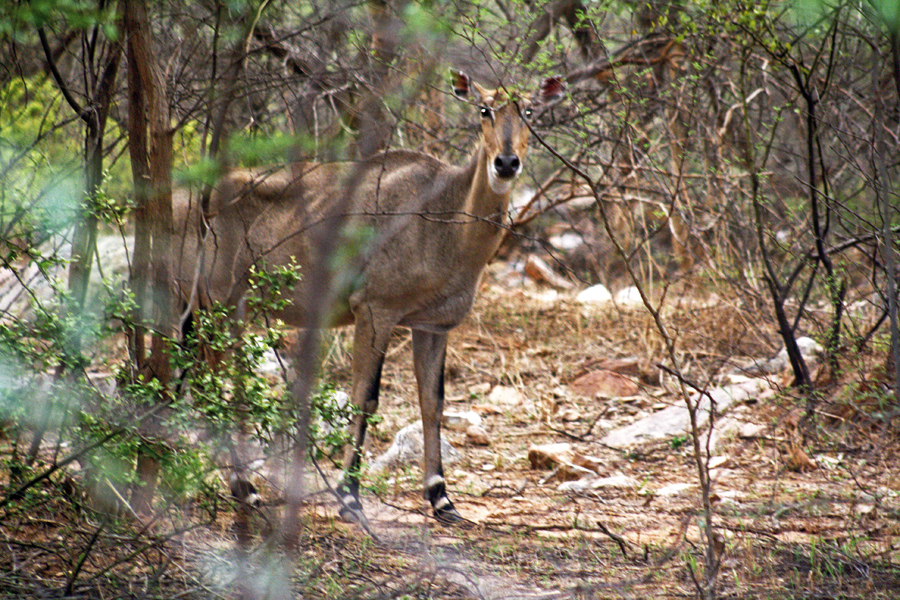 The nilgai Boselaphus tragocamelus, India’s largest antelope, is one of the most commonly spotted ungulates in the Mangar forests, which provide ample food for the herbivorous mammals.

Instead, in February 2019, the PLPA itself was sought to be amended, to remove the forest tag from 1,132 acres of Mangar and 60,000 acres of Aravallis. It is such ‘regularisation’ of wrong-doings that is at the root of official deforestation across India.

Meanwhile, the remaining 2,678 acres of hill forests including Mangar Bani continue to await declaration of their forest status. Sanctuary readers may remember that the Honourable Supreme Court, in the Godavarman case of 1996, had tasked states with the job of identifying areas recorded as forests in government records in each district by early 1997. The revenue records of the Mangar hills mention the type of land (as gair mumkin pahar) but are conspicuously silent on what is present on the land – extensive forest. This gap is still pending and the ‘system’ has conspired not to record an obvious forest as a forest, till date. 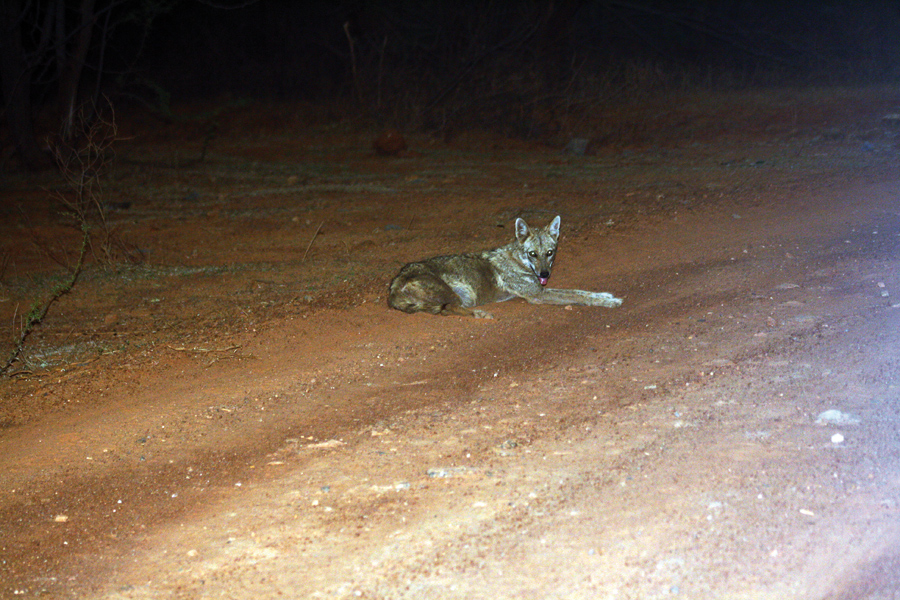 In 2016, researchers traced the presence of wildlife species like leopards, small Indian civets and golden jackals in Mangar Bani. A small canid, the golden jackal’s habitat in India is spread across Haryana, Rajasthan, Gujarat and Maharashtra.

The third option for a forest tag, also following the 1996 Godavarman order, is for an area to be identified as a ‘forest as per dictionary meaning’ – or simply a ‘deemed forest’. Roughly two decades later, Haryana has finally acknowledged that the forest status of its deemed forests (about 50,000 acres) had to be decided, but no steps have been taken, including in Mangar.

WHOSE LAND IS IT ANYWAY?

The ownership of the Mangar hills is disputed. Until the 1960s, these were village commons owned by the Panchayat. Then they were sold to outsiders. Common lands in the neighbouring villages of Bandwari and Kot too were sold, and for them, the local government is contesting the sale in courts to restore Panchayat/municipal ownership, but not in Mangar. What’s more, Mangar forests are further threatened by illegal clearing and fragmentation by fencing and wall construction. 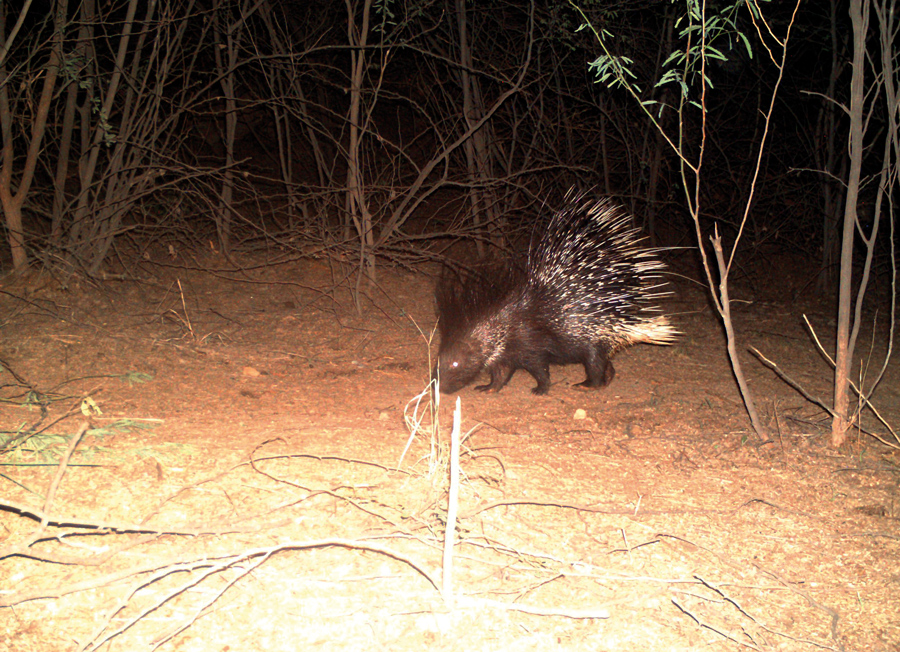 The Indian crested porcupine Hystrix indica is a rare sighting but has been spotted in the Mangar forests. It is a large rodent found in various habitats no higher than 2,500 m., almost all across Western Asia from Turkey to India. Though their populations are stable, they are frequently hunted for their meat.

In this scenario, the notification of the Mangar Bani core and buffer as ‘no construction zones’ in 2016 was a welcome first step in protecting the forests. The state now needs to legally restore ownership of the Mangar hills to the Panchayat and confirm the deemed forest status. 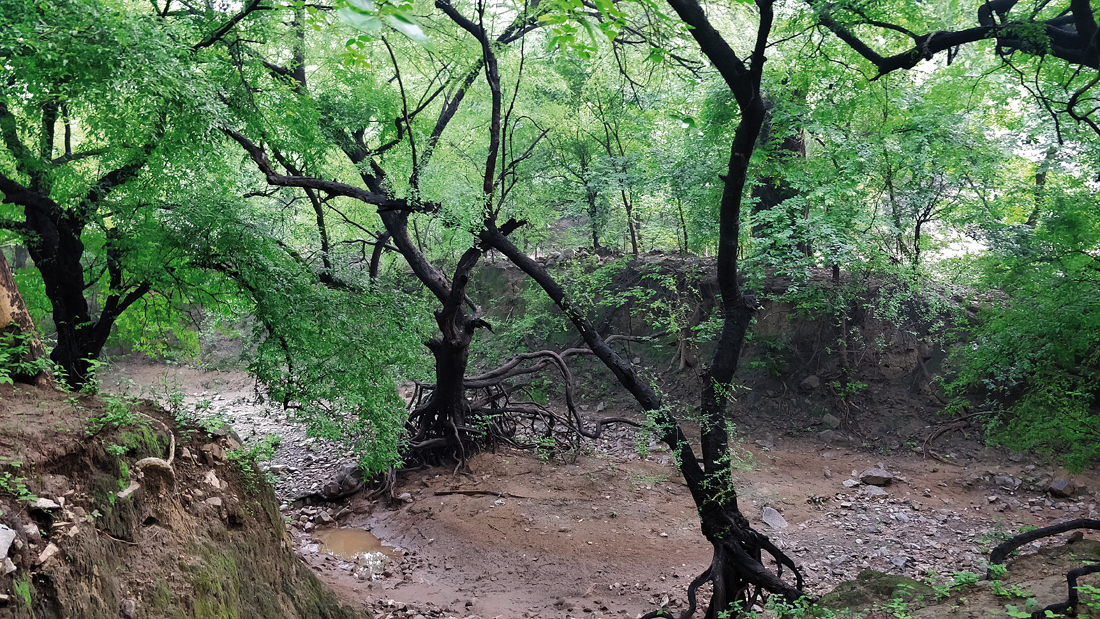 Mangar Bani is a sacred temple grove. Years of forbearance prevented the cutting of trees, branches or even the removal of leaves and has helped safeguard this old-growth forest.

This is all very fine, but leave a few knowledgeable naturalists in the area for even a week and they would probably ask for this remnant wilderness to be declared a national park or sanctuary. Such is the diversity and importance of this region. 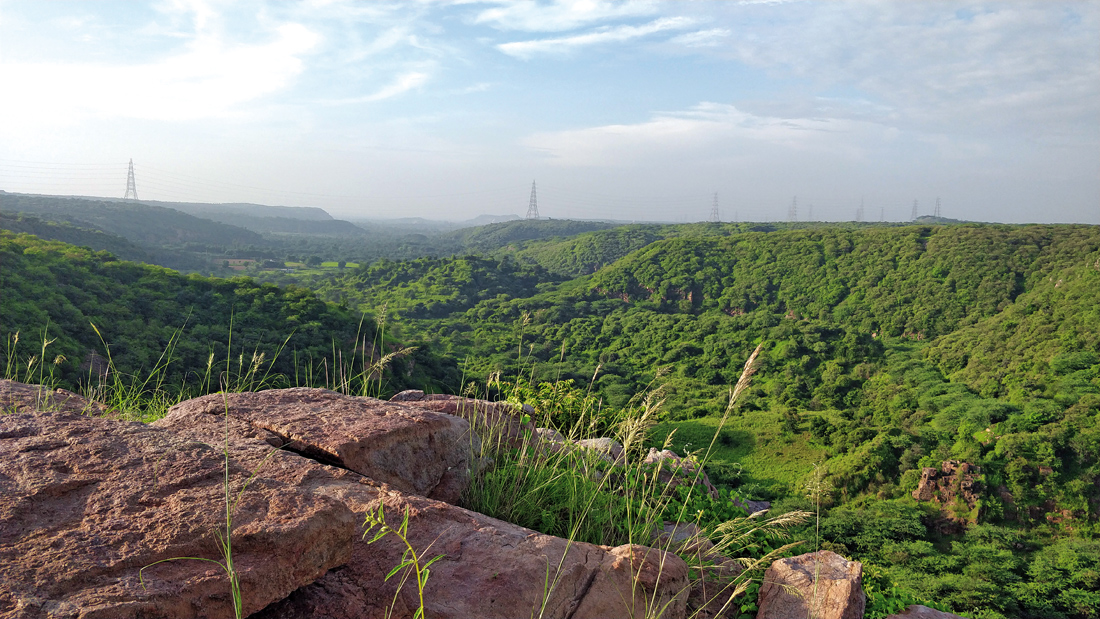 Possibly the most intact stretch of native tropical dry forest remaining in the National Capital Region, the Mangar forests are today threatened by encroachment and illegal deforestation at the hands of real-estate operators.

The Mangar landscape (Mangar Bani and its surroundings) possibly represents the most extensive and intact stretch of native tropical dry forest remaining in the National Capital Region. Despite proliferation of the invasive vilayati kikar Prosopis juliflora, there still exist sizeable stands of thorn scrub and dry deciduous forests typical of the Aravalli hills. Dhok Anogeissus pendula stands cover the rocky slopes, and scrub forest species such as heens Capparis sepiaria, wild ber Zizyphus mauritiana and palash Butea monosperma occur in the flatter areas. The Mangar landscape may not be pristine, but natural forest stands do occur in a mosaic of degraded vilayati kikar stands, small villages, cultivated areas, abandoned quarries and in some regenerated forest patches.

The star is undoubtedly the rare Indian Pitta, which breeds in the Bani, where birdwatchers flock each monsoon to watch and photograph it! Along with the Asola-Bhatti Wildlife Sanctuary and the connecting forests of Haryana in Gurgaon and Faridabad districts, Mangar forms the largest contiguous stretch of forest of biological value in Delhi NCR. There is no explicable reason for it not to be conserved for posterity.

THE KIDS ARE ALRIGHT

The Mangar Eco Club is an informal initiative for children that was set up in 2015, supported by several individuals including teachers from the Mangar Government School, Delhi’s birdwatchers and organisations such as the BNHS, Laksh Foundation and CEDAR. Every weekend, the members of the club, mostly children, are led by Sunil on a nature walk; a hands-on, in-depth exploration of Mangar Bani and the surrounding Aravalli area.Originally a birdwatching exercise, the club now actively works to conserve the forest and document the biodiversity of this sacred forest.

Five years post its inception, the Eco Club meets each weekend in Mangar Bani. Members and participants collect and sow seeds of native flora, document birds and butterflies, build check dams, and conduct clean-up drives. Often, they just sit beneath a canopy of branches and paint– the forest being their muse. They take great pride and pleasure in protecting and guiding interested visitors through their green haven.

Clearly, this is working. A former local schoolteacher, Vinod Ahlawat said, for instance, that participation in the Eco Club brought about a change in the outlook of the children he brought to experience the wilderness. The Mangar Eco Club is performing a vital task; that of encouraging the children living closest to its wilderness to learn about and love the rich biodiversity of their sacred grove.