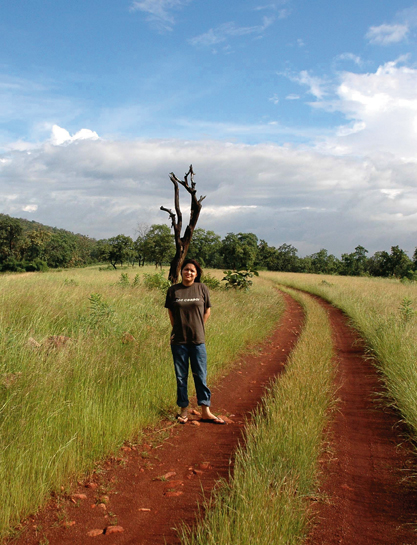 Prerna Bindra is the quintessential woman in a man's world.  A dogged wildlife journalist, she was presented with the Sanctuary-ABN AMRO Wildlife Service Award in 2007 for her contribution to the protection of wild animals, including the tiger. Born in Ahmedabad, her father was part of the Indian Police Service and her mother, a teacher. They gifted her with an ethical streak that has stood her in good stead all her life. She speaks to Bittu Sahgal about her passion for wildlife and her frustration with a system that seems unwilling to protect the natural heritage she holds so close to her heart.

A personal one. You have chosen to remain single. Is that because of the nature of your job as a journalist on the move?

It's a difficult one to answer. It takes a fine man to understand my concerns, passion and imperatives, particularly my need to travel to remote places at the drop of a hat, or the smell of a story. However, this just accentuates my need for roots, an anchor. So, the day I find him, the status might change!

Has being a woman been a disadvantage in a man's arena?

To a certain extent. A woman has to work harder to be taken seriously by men (journalists and wildlifers) who are uncomfortable with independent-minded women. But consistent and determined purpose tends to sort out this problem. Then there is that other handicap " I do not fear wild animals, but meeting the wrong kind of people when I am out alone sometimes does scare me. And with good reason... I know this from bitter personal experience. Let's leave it at that.

Let's leave that, though I wish this was a nicer world. What got you involved with wildlife?

I wish I knew. As a kid, I would doctor birds and small animals and gained a reputation (mistakenly or otherwise!) as an ˜animal doctor". It might have been the lion I saw when I was nine years old. This was in Gir, and its majesty and power still live with me. Much later, when I saw a photograph of a royal Bengal tiger “ alive, belly side up, trussed up and spread-eagled, four legs tied to the bars of its iron cage, waiting to be disembodied by men who stood by, laughing, it tipped the balance in my head. 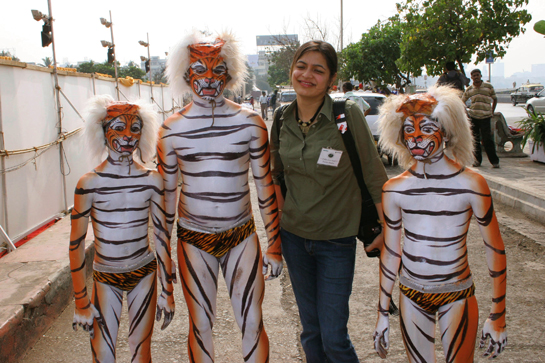 So it was anger that got you hooked?

I was disgusted; ashamed to be human. swore I would protect the tiger for as long s I lived.

And now it is love that draws you?

Some might describe it as love, but I am just instinctively protective of wild animals. I think humans do them far too much wrong, with deadly persistence. I believe from my soul that they have as much right to live in dignity as any human being does. They were born free. They should live free. It is to this proposition that my entire life is devoted.

Shall we shift focus? You must have had dozens of unforgettable wildlife experiences?

Yes. Luckily for me, literally too many to narrate, and none of them life-threatening. In fact, I marvel at the fiction that shikar writers so unashamedly infuse into their stories. I walk unarmed in forests with the faith that if you know and respect the jungle, you are safer here than you are in any big city. You must respect the comfort zone of animals and not invade their personal space. Having said this, I have indeed witnessed mock charges by both elephants and, very recently in Kaziranga, a mating rhino! But I am here and telling the tale, so obviously they never really intended to do me any harm.

If you don't know your wildlife, you could die walking in an Indian jungle.

I could not agree more. I remember, when I was around 15 years old, I instinctively picked up a snake that was being beaten to death. I put it in a bag and took it to a forest officer who nearly had a cardiac arrest. It was a cobra. In that instance, ignorance was bliss! Down the years, I have had my share of scares, which include almost falling off a panicky elephant right next to a mating pair of tigers and walking back to camp in the dark and hearing the sawing sound of a leopard much too close for comfort. But it is this Bittu, these experiences that make it all so worthwhile, that I live for.

What in your view is the role of a wildlife journalist - to report events or to affect the course of events?

Wildlife journalists are themselves an endangered lot. This is because media today has next to no column space (nor the budget) for serious, in-depth wildlife reports. Speaking for myself, I want to affect the course of events and not just report fait accomplis. We have access to information before it becomes public and often, how you use that information determines whether you stop environmental crime or merely report it. Having said this, environmental reporting requires much more accuracy and homework than regular journalism. Misinterpreting or even poor reporting can do more harm than good. The pen and in today's age the camera as well, are hardcore conservation tools and journalists must use them to engage people, influence public opinion, and expose crooks who are often policy makers.

Who are your heroes? Who has influenced you most?

Apart from my mother, who taught me to do my best and never give up, it was through James Herriot's books that I grew to love dogs and other animals. I realised then, the power of words, and that one must write from the heart. Gerald Durrell, F. W. Champion, EHA¦ You too, Bittu and I will not let you edit this. It was during my one-year stint at Sanctuary that my passion for wildlife found real direction. Ashok Kumar, who nurtured my interest in wildlife, P.K. Sen, Valmik Thapar, Mike Pandey, Belinda Wright¦ so many heroes. Also those brave forest officers (yes, there are some) who work within a killing system. And forest guards who work in abysmal conditions, and against all odds. 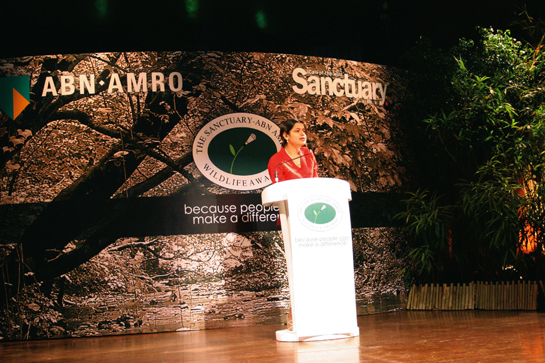 Have the people you have written about ever directed any aggression at you?

That is par for the course for any journalist. When I broke the story on the ivory trade in Gujarat, believe me, the traders involved were less than polite. Ditto with the bird traders who gheroed (surrounded) me when I next visited the bird market. Then there were the people at Jama Masjid, Delhi who had two or three tame blackbucks. Once, I saw the rough side of American officialdom when I wrote that you could gift a tiger to your macho boyfriend or hunt a tiger in the backwoods of Texas in the United States.

Loads. The blackbucks I mentioned earlier? Neither the police nor the forest officials acted in time, everyone kept telling me about the potential communal backlash. And in the meanwhile, to get rid of the evidence, the animals were reportedly killed and dumped. All I could think of were the blackbucks, and the fact that it was my story that killed them. I regret not being able to impress upon a retinue of editors that reporting on wildlife issues is of national importance. I regret vital stories still waiting to see the light of day; of not keeping a dairy of all my travels. Also that as a journalist, I have been unable to fight the fact that the people of my country are so fixated on their television sets and cell phones that they are not even aware that their natural treasures are being destroyed.