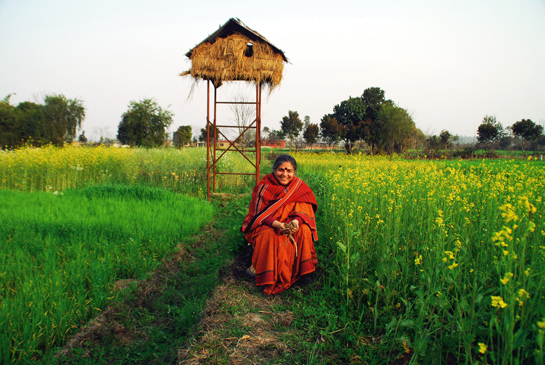 She did her Ph.D on the Foundations of Quantum Theory on Hidden Variables and Non Locality in Quantum Theory. She then abandoned academics in 1982 to start the Research Foundation for Science, Technology and Ecology (RFSTE) and over the past 38 years has dedicated her life to the protection of nature and the defense of peoples rights to natures resources - forests, biodiversity, water and land. Dr. Vandana Shiva, ecofeminist, spoke with Bittu Sahgal about conservation in the age of climate change, food security and the late Edward Goldsmith, one of the fathers of the modern environmental movement.

Are you comfortable with the ‘ecofeminist label that is often used to describe you?

I do not feel comfortable with any ‘ism. However, I do believe that we have to recover the feminine. We have to once again start seeing the earth as our mother. We have to recognise that capitalist patriarchy dominates both women and nature - turning nature into dead matter and women into the “second sex". In India, with female foeticide we could call women the “dispensable sex". As I wrote in my book, Staying Alive, about the ecological crisis in the Himalaya and the Bhopal disaster, women were the worst victims, but they also turned out to be the toughest ecowarriors.

When did your journey begin Vandana? What propelled you along the path your life has taken?

My ecological journey began in childhood. My father was a Conservator of Forests and I have trekked with him through Himalayan forests long before roads were built. In the 1960s India responded to the Chinese aggression by building roads, which became conduits for timber to be taken out. The deforestation led to the women of Garhwal rising in defense of the forests against the loggers in 1972. This was the birth of the Chipko Movement, which I joined as a volunteer doing padyatras and writing reports. I call it my real education - in the “Chipko University".

You are a prolific writer, where do you find the time?

Writing is vital. Future generations must have an archive of both the genius of the people and the misdemeanors of their flawed leaders. With my eyes enriched by biodiversity, I was able to see the poverty of monocultures in both forestry and agriculture. And in 1984, the violence in Punjab and the Bhopal disaster (remember Union Carbide was making pesticides) woke me up to the fact that agriculture had become like war. I studied the Green Revolution, wrote my book The Violence of the Green Revolution and decided to practice and promote a non-violent agriculture based on natures laws and natures ecological processes.

And that is how Navdanya was born?

Yes. Navdanya means both “nine seeds" as well as “new gift". We work to save seeds as an alternative to the corporations that use the WTO to impose Genetically Modified Organisms and seed monopolies on all countries. Navdanya believes that converting seeds into private property through Intellectual Property Rights is a crime. To encourage the ancient practice of free sharing and saving seeds, Navdanya has set up more than 50 community seed banks in 16 states of India. We work with 500,000 farmers to defend seed freedom(Bija Swaraj) and food freedom (Anna Swaraj).

This seems not to impress Dr. Manmohan Singh? Why do you think he refuses to publicly address farmers and fisherfolk on the looming threats from climate change?

I think there are two reasons the PM is not preparing the nation for climate change. Firstly, he like many others believes a technological fix will get us out of this mess. Secondly, if he has to support a fossil-fuel based trajectory of development, he has to stay silent on its externalities. We cannot wait for him. We have begun undertaking a participatory climate impact assessment together with farmers. Our study Climate Change at the Third Pole: The Impact of Climate Change on Himalayan Communities and Himalayan Ecosystems combines expert science with peoples science. This is the way forward given the fallibility of scientists, and the attempt by polluters to destroy the edifice on which the science of climate change rests.

So what does climate change have in store for farmers?

Intensification of drought, floods and cyclones and repeated monsoon failures. These have already impacted two-thirds of India, especially the fertile Gangetic bread basket. Bihar has had a 43 per cent rainfall deficit, Jharkhand - 47 per cent, Uttar Pradesh - 64 per cent, Haryana - 61 per cent, Punjab - 26 per cent, Himachal Pradesh - 63 per cent, Uttarakhand - 42 per cent. If this is not enough to waken the Prime Ministers advisors, who knows what will.

You have examples of direct impacts?

Lets take one state. In Uttarakhand, our participatory research revealed that over the past decade, 34 per cent of perennial streams have become seasonal, or have completely dried up. Water discharge has reduced by an average of 67 per cent. In 2007-2008, 50 per cent to 60 per cent of crops failed due to drought. The 2009 drought caused a 90 per cent crop failure. Thats not all, 95 per cent of the Chir Pine forests have had forest fires in 2009. This is likely to rise as our planet heats up. The drought has led to fodder scarcity, which has led to a rapid decline in livestock. Livestock population has declined by 74 per cent in Bhagirathi Valley, 72 per cent in Mandakini Valley, 64 per cent in Yamuna Valley and 57 per cent in Alaknanda Valley. The evidence of a food collapse is staring all but the very blind in the face. 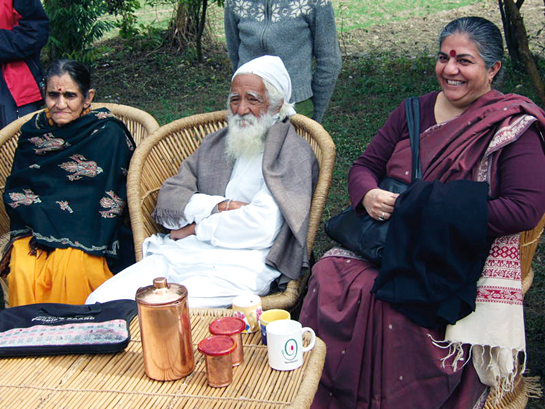 What causes this blindness?

The dominant paradigm of agriculture based on the Green Revolution and Genetic Engineering, which by definition reduces biodiversity and rejects organic production in favour of monocultures that require intensive inputs of chemicals, water and fossil fuels. Ironically, as the multiple crises deepens, the corporations driving the Green Revolution and Genetic Engineering, seek to transform these crises into lucrative, new marketing opportunities.

So what is Indias answer?

First the conservation and large scale distribution of open-pollinated varieties/open source seeds of water-prudent crops; then the promotion of organic agriculture to increase climate resilience and food and water security and third, incentives to shift from water-guzzling green revolution agriculture to water-conserving biodiverse organic farming.

Because reductionism is the dominant way of thinking Bittu. Reductionism has got us into the ecological crisis. But, as Einstein famously said: “We cannot solve our problems with the same thinking we used when we created them." We therefore must make a paradigm shift from reductionist approaches to ecological approaches.

Is there any hope that this will happen?

It has to. For instance, climate change will eventually leave us no option but to use biodiverse organic farms to shore up our food security by increasing the resilience and reducing the climate vulnerability of farming systems. Such farms will enhance food security because they have higher production of food and nutrition per acre than Green Revolution monocultures, which only measure the yield of our commodity, not the total food output, nor the nutritional quality of food. Put simply, maximising biodiversity and organic matter production enhances climate resilience, food security and water security. Its the only way left for humanity to survive in the long run.

You sound like the late Teddy Goldsmith, Editor of The Ecologist!

That is because he still lives within me. There is no single person doing all that Teddy Goldsmith did. But if you look around, virtually every aspect of the ecological movement was seeded by Teddy. And all these movements are vibrant and growing.  My first interaction with Teddy was when he published an article I wrote on monocultures in The Ecologist in 1980 on the basis of our study on the impact of eucalyptus monocultures being promoted on farm land by the World Banks ‘social forestry project.

Teddy was one of the first to recognise what the World Bank was doing to the planet, right?

He was. He conceived and launched the Global Campaign against the World Bank. By 1988 when the World Banks annual meeting was organised in Berlin, the campaign Teddy had started saw over 100,000 people on the streets.  There was also the Bertrand Russell Tribunal on the World Bank and its crimes where I represented ‘Nature, Teddy was ‘Natures Advocate. The Tribunal brought together all the cases of ecological destruction financed by the World Bank. The global movement for alternatives is unstoppable. Climate change will hurtfully force world leaders to do natures bidding. Teddy Goldsmith and thinkers like him advised that this U-turn be systematic, voluntary and gradual. His advice lies waiting in the wings to be used, possibly when the countries of the world will be at panic stations. There is so much wisdom that Teddy left us in the shape and form of The Ecologist documents, such as the Case Against Large Dams and the integrated movements against such impoundments. The best tribute to him would be for us to continue our collective work with the unique combination of outrage and fun that Teddy bequeathed to us. Teddy was one of my dearest and most precious friends.  I miss him deeply.

Sanctuary believes that agriculture in the heart of the forest sets people up for lifetime conflict with beetles, grasshoppers, herbivores and even carnivores that prey on livestock. What is your take on this?

Agriculture can be like the forest. After all indigenous people have practiced agriculture in the forest without destroying the forest. Research in the Amazon has shown that small agriculture plots actually enhanced biodiversity. It is when industrial, chemical, commercial agriculture is introduced that it destroys the forest or when tribals and indigenous communities are left with very little access to forest; their sustainable practices can no longer be sustained. This is the case of shifting cultivation.

Would you support legislation that makes it illegal to use pesticide inside, or within a five kilometre radius of a national park or sanctuary?

I would support a ban on pesticides everywhere, not just within a five kilometre radius. We do not need pesticides. Agro ecology is the only sustainable pest control system.

And the Forest Rights Act and the Wildlife (Protection) Act? Can they work in harmony?

The Forest Rights Act and Wildlife (Protection) Act can be friends if forest rights are defined within the limits of the forest ecosystems. Tribals and wildlife have co-existed under a tribal way of life. The danger lies in imposing industrial/commercial ways of life on tribals. Then conflicts start. Today, it is not just the tiger that is faced with extinction. Tribals are being flushed out of their forest homes by mining companies like Vedanta. And operation ‘Green Hunt seeks to destroy the homes of both the tribal and the tiger and clear the way for the biggest land grab since Columbus. Those who want to defend the rights of the tiger and the tribals need to join hands to stop predatory corporations from wiping out our forests.

One last thing. Whats your take on the latest Himalayan controversy and glacial melt?

The IPCC got the date wrong, but the Himalaya, the mountains of snow, are losing their snow. The IPCC has apologised for the unfounded date of 2035 for the disappearance of snows in the Himalaya, but this does not imply that nothing is wrong and that the glaciers are well. Apart from this, the scientists that Indias Ministry of Environment and Forests (MoEF) quotes also got it wrong when they said: “Our data indicate the Ganges results primarily from monsoon rainfall, and until the monsoon fails completely, there will be a Ganges river, very similar to the present river". Its true that the monsoons account for most of the river flow when it rains, but glacial melt is what accounts for flow in the lean season when it is most needed. With reducing glacial melt, the Ganges will become a seasonal river, not the perennial river that it is. The MoEF is in charge of Climate Change Mitigation and Adaptation but it is fiddling with figures, while the Himalaya loses its springs and streams, its snows and glaciers.