The Himalayan Institute of Alternatives, Ladakh (HIAL)
By Rigzen Mingyur

In the Western Himalayan region, where mountains meet the cold desert of Ladakh, exists an austere landscape to which wild plant and animal species have adapted over millions of years. Here, where no more than 100 mm. of rain normally falls in a year, all living creatures, plant, animal and human, have survived by adapting to the extreme climate imperatives posed by what the world has come to refer as The Third Pole.

Ironically, the ancient glaciers of this region supply one-fifth of humanity the water they need to survive. As for the inhabitants and local biodiversity of Ladakh, they are completely dependent on glaciers for their water needs. During summer (June to August), the region receives its negligible quantum of rain. In peak winter (December to February), it snows. At these frozen heights, the snow piles up, without melting, and over extended periods of time it forms the massive Himalayan glaciers that feed the rivers and cater to the water needs of over a billion people living in other parts of India, and as far away as Afghanistan, Pakistan, Nepal, China, Bhutan, Bangladesh, and Myanmar for eons.

As for those who actually live in the cold desert, life without glacial water is inconceivable. These are the rugged, hardworking communities that The Himalayan Institute of Alternative Livelihoods is working with and for. Their mission is to help them adapt to the climate crisis that has hit them for no fault of their own. Their glaciers are melting. Their very existence is in peril.

Growing up in an agro-pastoralist village in the eastern part of Ladakh called Rumste Gya, situated at 4,200 m. above sea level, I have first-hand experience of the region’s water scarcity.

The harsh climate allows for a narrow six-month window for agricultural activities that commence in spring, when the weather warms and the glaciers start to melt. Traditionally, Ladakhi communities have always practiced co-operative farming, where villagers work together on a farm on a rotational basis. Each villager irrigates his fields after a certain number of days, taking turns, because there is only one source of water… the glaciers.

But in recent years, Himalayan glaciers have receded at an alarming rate. A study on Ladakh’s glaciers revealed that roughly 14 per cent of the glacial mass has already been lost in the past four decades. Ironically, the dramatic increase of tourists over the last three decades has had a significant, indirect, contribution to this disaster because of the increased number of vehicles that produce black carbon emissions. Added to this is the hopelessly inadequate waste management that sees the dramatically enhanced ‘waste’ brought in by tourists being burned, and adding to the black carbon blanket laid over glaciers and snow. This increases heat absorption and causes still more melting. 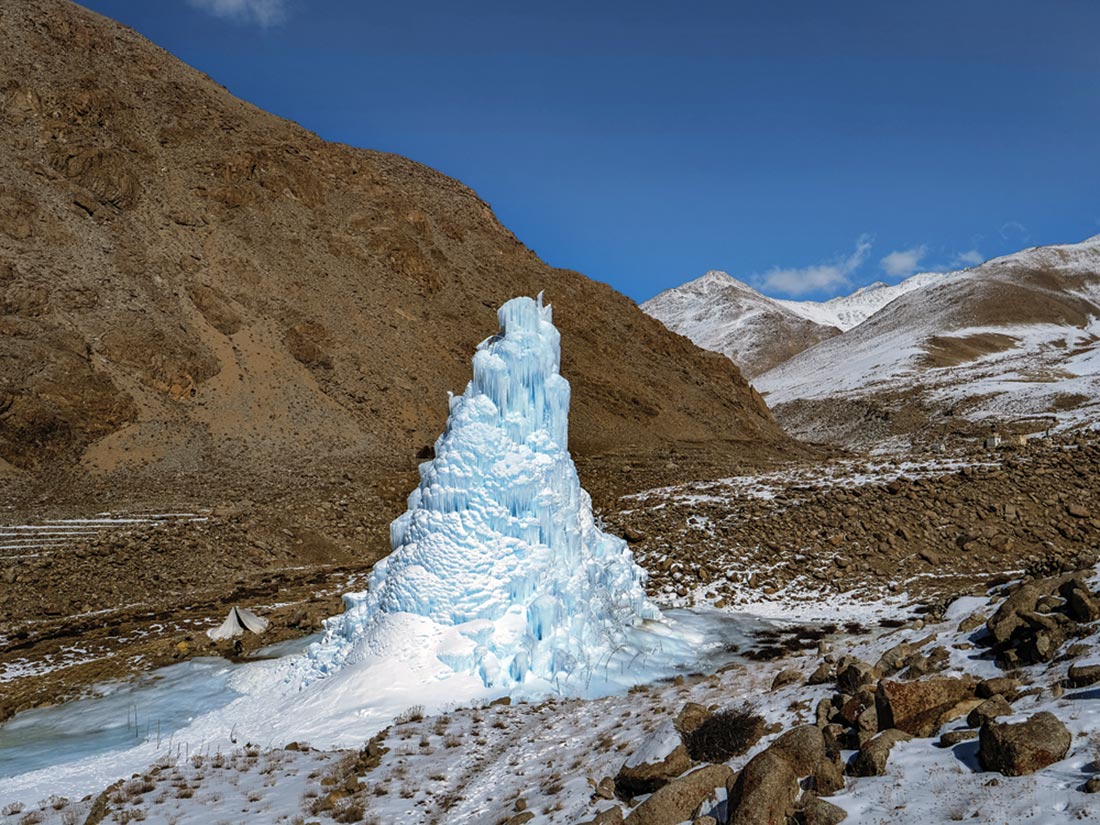 An ice stupa artificial glacier at Igoo village, Ladakh. These man-made structures are formed when water from a higher altitude is brought to a lower site through gravity and then forced upward through a pipe. The water then freezes to form an artificial glacier. Photo: Rigzen Mingyur.

Ladakh’s food security is being severely impacted by retreating glaciers. Some villages have already seen forced migration of locals from one village to another because of glacier retreat. The Kumik, Kulum, and Shun villages are cases in point that saw such migrations in 2016, 2010 and 2002, respectively (approximate years). Similarly, several glacier-fed meadows and wetlands, vital habitats for small mammals such as marmots, pikas and voles, are gradually drying up. Himalayan marmots use these meadows to hibernate during the winter, and their loss will affect their survival and impact the food chain. These meadows are also essential for migratory birds to rest and feed. The Tso kar lake, at a height of 4,657 m., a Ramsar site, is one such vital location for vast numbers of avian species that migrate from faraway lands to breed and nest. According to local herders and residents, glacial melt in recent years has led to the lake drying up to the point where the small remaining pools of water cannot even be seen by visitors.

As a buffer against such drastic seasonal changes, and to ensure water year-round for irrigation and livelihoods, Ladakhis have been building artificial glaciers for hundreds of years. The remains of such artificial glaciers are still found in some villages. In Shara, one such village, villagers had constructed a wall in the middle of the stream to break the velocity of water, which resulted in quick freezing. The simple logic behind this is that slow-moving or still water freezes, while fast-moving water does not. But this technique was not very successful and needed improvisation.

Then, Tsewang Norphel, known as the Iceman of India, innovated a new strategy, involving the creation of horizontal artificial glaciers using two techniques, “in-stream” and “diversion”. This design proved to be more successful and Norphel’s method was consequently adopted by several villages in Ladakh between 2000-2012. While as many as 12 such artificial glaciers were created, the structures had limitations. It was necessary, for instance, that the site be north-facing, and that the glaciers be built close to the village, but not at a great height, since that would make them difficult to maintain.

This is when Sonam Wangchuk, a Mechanical Engineer by education, came up with an alternative idea. He designed a vertical ‘Ice Stupa’ that served as a dome-like artificial glacier. Wangchuk had worked in the field of education reform in Ladakh for over 30 years. He founded the Students’ Educational and Cultural Movement of Ladakh (SECMOL), which sought to introduce reforms into the government school system in Ladakh. He also founded the Himalayan Institute of Alternatives – Ladakh (HIAL). As its Director, Wangchuk works to create centres of excellence and collaborates with existing educational institutions to demonstrate new possibilities in the spheres of education and environment for mountain development. 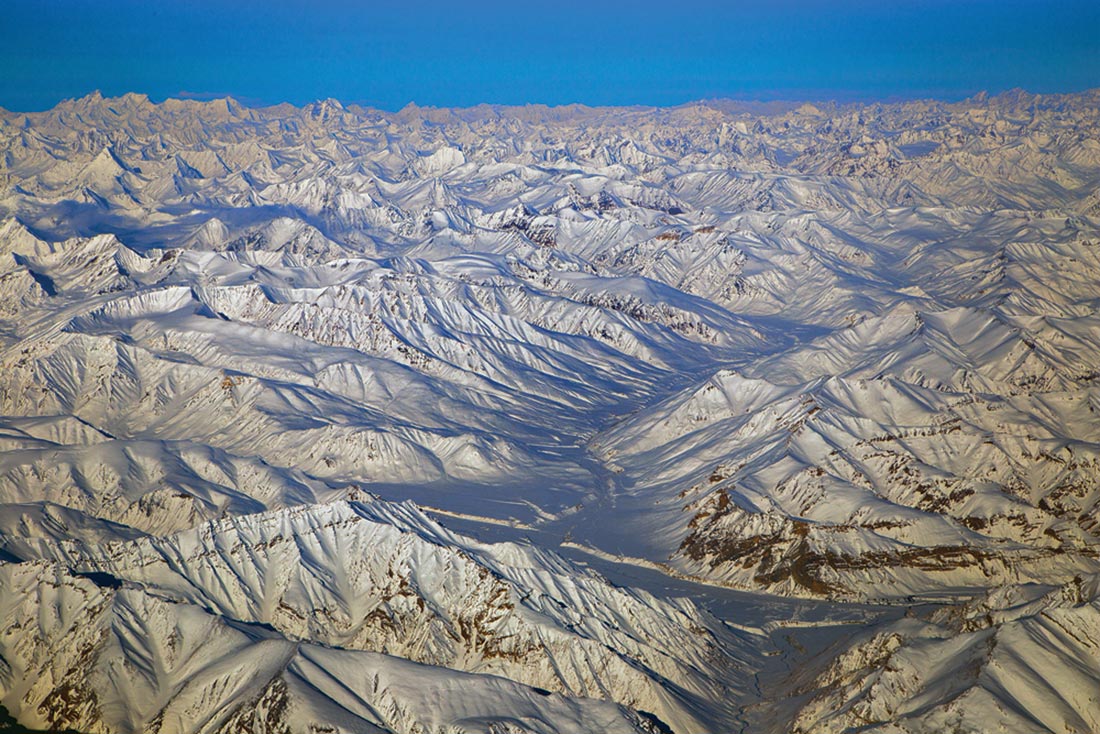 The massive glaciers of the Himalaya store water and slowly release them into rivers and streams, providing water to over one billion people. As the climate crisis increases the rate of melt off, these vital water sources are in peril. Photo: Saurabh Sawant.

I worked at HIAL after college and spent over six years on the Ice Stupa Project, building the Ice Stupas and training villagers to maintain them. The science behind making an Ice Stupa is simple: gravitational force is used to source water through a pipeline from a higher elevation upstream to the glacier site, which is usually lower than the source. The water is then forced upward through a vertical pipe of a specific height. Due to the altitude difference between the source and the site (uphill to downhill), water sprinkles out with pressure, which, when exposed to minus degree ambient temperature, instantly freezes to form a stupa. Such structures can provide water to local villages and farmers over months, perhaps even years. Such artificial glaciers are typically built next to a field and when the farming season (summer) begins, these melt and provide water for irrigation.

The idea and the first prototypes were made in the winter of 2013. Taking inspiration from ancestral practices and Tsewang Norphel’s work on artificial glaciers, the Ice Stupas were created at carefully chosen locations across Ladakh. The project and art of ‘glacier grafting’ soon took off and has since come a long way. In 2013-14 there was just one Ice Stupa in one village – Phayang. Today as many as 30 have been set up across Ladakh. Expectedly, HIAL introduced several improvements and some have even been emulated overseas, like in Switzerland and Peru. Literally a life-support system, the project has trained as many as 300 village-level experts who help raised awareness and conduct workshops and training sessions. 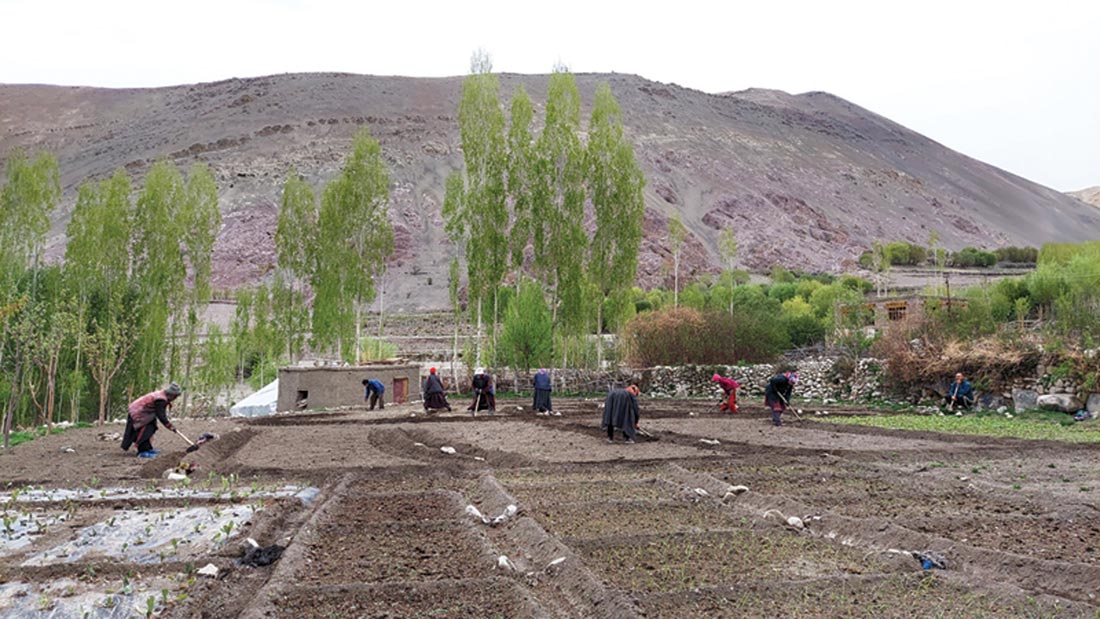 Ice Stupas provide water to villages for several months, some lasting even for years. They are usually built next to agriculture fields and are the main irrigation source during summer. Photo: Rigzen Mingyur.

The Ice Stupa Project at HIAL is now attempting to rehabilitate the abandoned village, Kulum, with the help of artificial glaciers and drip irrigation techniques. Kulum is located 50 km. south-east of Leh, and is divided into two hamlets, Upper and Lower Kulum, which are inhabited by seven and four families respectively. Triggered by a glacial retreat in the higher valley, upper Kulum was totally abandoned in 2010, with families moving into the nearby town centre of Upshi. To make ends meet, residents were forced to abandon their traditional agrarian practices to work as daily wage labourers, or run utility shops. Wildlife such as snow leopards, blue sheep, Tibetan wolves, red foxes and different species of birds, which were once commonly seen around the villages, have completely disappeared. Kulum’s villagers are now working with HIAL to create Ice Stupas in the winter. When spring comes, they will be able to irrigate their fields using drip irrigation techniques. Once the meadows return, hopefully the wildlife will too.

What I have outlined here are only some current solutions being put in place to meet the existing crisis, but can this be a permanent solution? Such location-specific innovations cannot work at large scales, and while they may sustain farming, they will be unable to meet the growing needs of tourism, development, or population growth. In parallel to technological changes, it is time to consider if changes in our lifestyles to live more simply might be more effective. With our interconnected global world, where cause and effect often play out in distant geographies, there is also a pressing need for people living in cities to adapt to the climate crisis… to switch to a simpler, sustainable lifestyle. If they cannot or will not, the simple people of high mountains will pay the highest price first. But the climate crisis is a great equaliser and it will catch up soon with those who imagine they are insulated from the impact of their unsustainable lifestyles.

Rigzen Mingyur is a Ladakhi from the Rumtse Gya village and has worked in Hial from 2016 to 2021 on the Ice Stupa Project, Sustainable Tourism, and other sustainable living initiatives. He is currently a Visiting Researcher at the Indian Institute of Science Education and Research (IISER), Tirupati.