Messages Etched in Wood are ignored by human policies, writes journalist-conservationist Neha Sinha, citing wrenching examples of the fall-out of poor policy as she picks at the seams of India’s new environmental ‘reforms’. From a flimsy Draft Wetlands Bill to a National Waterways Act that is blind to basic hydrology, she wonders if intelligent interventions are no longer acceptable to India’s policymakers.

Machhli jal ki rani hai, jeevan uska paani hai (The fish is the queen of the water, without it she’d be slaughtered) goes the childhood rhyme. I’ll add to that little verse - birds soar high in the sky, land is scanned by the tigers’ eye. I’m bringing up these childhood musings because environmental policy today ventures to propose that water, sky, and earth belong only to people and industry, and not shoals of fish, schools of dolphins, parliaments of owls, and streaks of tigers.
When faced with difficult questions on wildlife management, some of the answers come from animal behavioural ecology — the sort of thing that a weather-beaten forest guard, or a good conservation biology textbook would be able to tell you. For instance, those who watch Great Indian Bustards will note that this wide-ranging bird often collides fatally with overhead wires, unable to see them due to its narrow frontal vision. Field staff can tell you in a blink of an eye that a nilgai is a savannah (and not forest) species, so calling them animals ‘straying out’ of forests is misplaced. Fishermen can tell you dolphins, blind or otherwise, need unhindered water flow, so barrages and dams are not amenable to their lives.

Not the act of God

But policy is often stuck between hyperbole, budgeting boxes and airy terms of sustainable development. Often blind to blind dolphins, and myopic towards short-sighted flying birds. In the past few months, a slew of new ‘reforms’ have been introduced and are set to have serious impacts on ecology. We now have a new National Waterways Act (2016) which will straighten, dam and barrage rivers to make streams of commerce, carving out ways in the water for coal ships, cargo and human movement. These rivers include critical dolphin and gharial habitat. We have renewable energy and linear projects now placed outside the ambit of the Environment Impact Assessment regime. This will mean thousands and thousands of wires criss-crossing skies and roads, and other linear intrusions bisecting tiger reserves, grasslands and natural areas (for instance, the target for highway authorities is to construct 30 kilometres of highway per day, so about 10,000 km. annually).

This year, the government introduced a draft Wetland Bill, which takes away any ecological criteria for identifying wetlands, freeing up states to do what they want with this most usurped ecosystem. Working simultaneously with all this, we also have a new decision to randomly cull species declared as vermin (read: pest)

On the face of it, this is not some grand conspiracy to threaten our wild spaces. But driven by various interest groups that do not have conservation as a goal, the total effects of these changes can be summarised into – terrified wildlife (both in Protected Areas and outside of them) run over and hemmed in by road, wire and railway; shot at if seen often enough by humans; and imperilled dolphins and aquatic animals in rivers, trapped by barrages and waterways for coal ships.

The dredging, damming and straightening of rivers that will be allowed under the National Waterways Act, 2016, jeopardises the future of the endangered Gangetic dolphin and other riverine species. Photo Courtesy: Reba Kr Borah

Let’s look at the wires first. With linear projects getting cleared without the need for Environmental Impact Assessments (EIAs), we will have an increase in transmission lines laid. These are not just lines for existing projects (or their expansion) but also for new renewable energy targets the government is keen on pursuing. While solar and wind energy are couched as green, benign projects, they all entail masses and mazes of new transmission wires. Huge swathes of wildlife areas will have wires as a new anthropogenic landscape, particularly in the Western Ghats, the Thar desert and coastal Gujarat where many of these projects are planned.

Can energy and ecology be balanced? Happily, Rajasthan state, which has the most viable population of the Great Indian Bustard (GIB), has taken a pioneering step in this direction. At a recent meeting of the Rajasthan Forest Department, energy officials (from Rajasthan Rajya Vidyut Utpadan Nigam Limited and Rajasthan Renewable Energy Corporation Limited), and wind and solar developers, it was decided that no new lines will come up in the core GIB area in the state. The possibility of taking existing wires underground will also be explored and existing lines will be marked with diverters, it was decided. The issue with renewable energy, and linear projects (roads, railways, transmission lines) is not the ‘why’ (we all want the same thing in terms of generation of clean power) but the ‘where’. As far as possible, linear impacts should
be avoided in wildlife breeding areas, bird congregation sites and biodiverse hotspots. 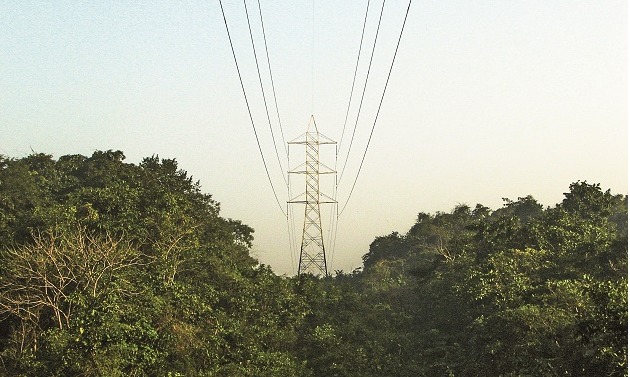 Moving from green to blue – the new Waterways Act poses a challenge to our (somewhat) new National Aquatic animal, the Gangetic dolphin. “The new Waterways Act will basically be making roads out of our rivers. The rivers will be straightened to create smooth passageways; which means natural meanders of the river will be reduced artificially. There will be dredging of rivers, and deepening and digging of river beds. The Act envisages creating two or three barrages on the Ganga river. How do we expect aquatic fauna like dolphins to thrive with these disturbances?” asks Qamar Qureshi, Professor, Wildlife Institute of India. Recently, the Ministry of Environment, Forest and Climate Change identified the Gangetic dolphin as one of the species to be conserved under a large compensatory afforestation programme fund. A long-term plan for the persistence of the species is being prepared. But even as one department plans to save the species, another department is set to alter its habitat forever. For instance, by the Act’s own admission, ‘hazardous goods’ will be carried in the waterways, and there has been no cumulative study of impacts on water fauna. Nor on the impact of toxic spills on local communities.

The damage that species like the rhesus macaque cause to farmers is severe, but human-wildlife conflict requires scientific intervention not reactive, short-term solutions like culling. Photo Courtesy:Shrikrishna Patil

Meanwhile, inland water is suffering its own identity crises. A new draft for the Wetland Rules of India, which form the foundation of wetland protection in India, has done away with ecological criteria for identifying wetlands. If the new draft is accepted, states will be empowered to change the land use of wetlands to other uses with ease. The concept of ‘wetland complexes’, the source of water for wetlands, and what sort of activities destroy wetlands—all part of the previous wetland rules—are missing from the new draft. How is this likely to impact wetland conservation? 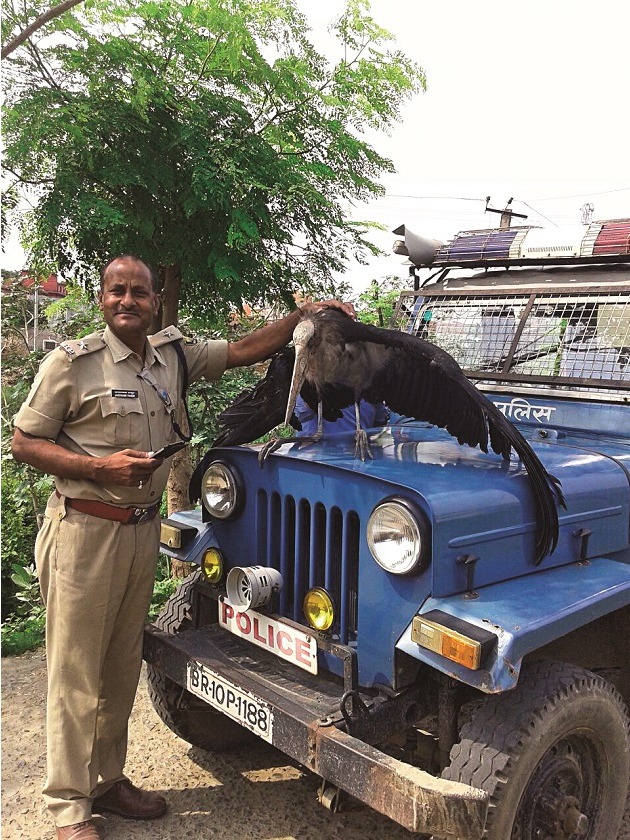 In Bihar, a police officer holds up an injured Greater Adjutant Stork for a photograph (above) before taking it to a recently-opened rescue and rehabilitation centre in Bhagalpur. The state’s wetlands are home to a flourishing population (below) of this endangered bird, but these vital habitats lie threatened. Photo Courtesy: Arvind Mishra

Let’s start with states which are on flood plains and river basins. Like Bihar, which also has a flourishing population of wetland-dependent Greater Adjutant storks. Watered by the large, temperamental rivers Kosi and Ganga, Bihar needs its wetlands for its birds, marginal fishermen, and flood control. “I’d say three-fourths of Bihar is under wetlands,” says Arvind Mishra, member, State Wildlife Board of Bihar and Bihar State coordinator, Indian Bird Conservation Network. “People may think these areas are not wetlands in the dry season, but we need these wetlands for the future of the state. We need strong rules to protect wetlands coming from both the Centre and the state.” Greater Adjutant Storks, majestic, nearly 150 cm. tall birds, need the wetlands too. These peculiar-looking, endangered birds forage in wetlands for fish, and for snakes in paddy fields. Recently, Bihar opened a first-of-its-kind rescue and rehabilitation centre for Greater Adjutant Storks, as their chicks often fall out of nests and usually require rehabilitative attention. But just as in the case of dolphins, these conservation efforts need bolstering through law and policy. Weak wetland legislation will undermine these pioneering local efforts.

Perhaps the greatest ethical dilemma facing wildlife conservationists and animal rights activists alike is the question of killing wild animals deemed troublesome. This too has a policy push – the Environment Ministry has asked states to come up with lists of wildlife to be declared ‘vermin’, so they can be killed without question to stem ‘conflict’. Himachal Pradesh has described rhesus macaques, one of the finest pollinators of fruit trees and a prey species for leopards, as vermin. Bihar has done the same for nilgai and wild pig. Orders under section 11 of the Wild Life Protection Act, 1972, (on killing of animals for a certain time period) have led to the shooting and trapping of wild pig in Telangana and Maharashtra. Section 11 has thus had similar impacts as the declaration of animals as vermin (Section 62) as both provisions are being used for the wanton and random killing of animals. More than 200 nilgai were shot in Bihar, and possibly more wild pigs in Maharashtra.

Is this revenge and retribution, or a solution being implemented? How does this sort of management practice impact conservation ethics? G.S. Bhardwaj, CCF (Wildlife), Rajasthan Forest Department, has done a study of management of nilgai in Gujarat for the Rajasthan Forest Department, and he has this to say: “All management practices should be science-based. Neither should we get too emotional regarding the problem at hand, nor should we have random acts. Let’s use the best possible technology to deal with the issues at hand. We can explore contraceptives for nilgai.”

As our policies become less tolerant of wildlife — whether in water, air or land, human-wildlife conflict is clearly on the rise. Will this also increase our propensity to shoot wildlife, or might we take the challenge of searching for and implementing more intelligent, more nuanced interventions?

Bottom line? Extempore edicts won’t work. This is a cross-sectoral national issue. We need to accept that without wild species we cannot hope to save wild ecosystems, which are also vital for human survival. Yet, we must equally accept that the cost for the larger national interest must not be paid by those on the lowest economic rung… generally those living far from where our tax money is spent, outside the forest and far from urbania.
Worryingly, while such matters are debated by those who know and care, most new policies, being crafted by the less than aware, seem headed in the direction of ‘wildlife stay out’.