Real Down to Earth Conservation: August 2022

A Leaf of Faith

In Panijhora forest village, every day, project leader Amir Kumar Chhetri continues to monitor all three camera traps that have been installed around the solar fences. The data collected has been useful in remodeling these fences to adjust to wild animal behaviour and prevent their entry into agricultural fields. In May 2022, he collaborated with members of the resident community and re-installed one side of the solar fence after the resolution of a land expansion drive by Indian Oil Company.

Along with Priyanka Das, his co-worker, Amir has been working on a booklet to document the 30 most dominant plants in Panijhora forest village and surrounding areas i.e., Chapramari Wildlife Sanctuary, Jalpaiguri Forest Division, and the tea estate-forest mosaic landscape in the Dooars region of northern West Bengal. It was while conducting vegetation surveys here in 2020 during a study of forage selection by elephants, that they felt the need for creating such a booklet to share the knowledge they had gained.

Amir’s local expertise and ethnobotanical knowledge served as the bedrock for identifying the vegetation during the surveys and continue to be integral to the booklet. Following the completion of the draft booklet, Amir conducted one-on-one discussions with village elders to verify information about each species. Further, he interacted with forest guards from various Beat Offices to collect local Rajbangshi and Sadri plant names. 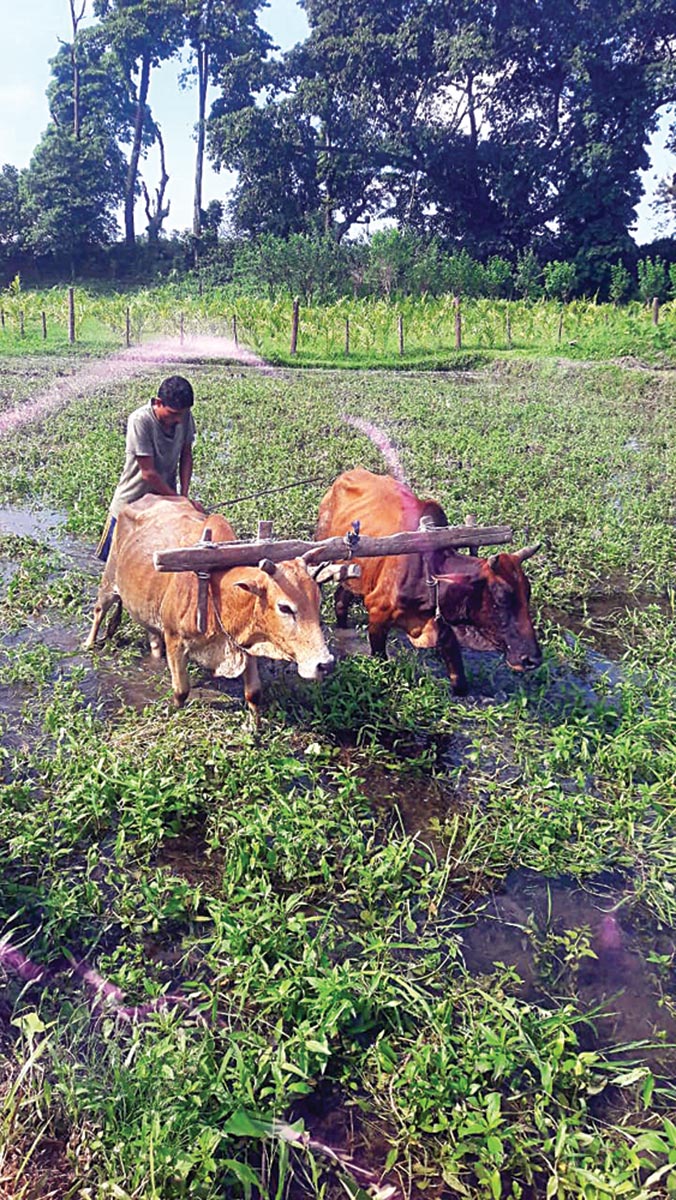 Passionate about protecting wildlife, Amir understands that conserving the natural food base in forests is one of the many important strategies to foster human-wildlife coexistence in Panijhora forest village and its adjoining areas. Through this booklet, Amir hopes to generate curiosity and appreciation regarding plants among locals and tourists alike, and to share his knowledge and reverence for the habitat with others.

Based on their interactions with locals and the knowledge gained through their constant field surveys, Dechin and Pemba organised first-of-its-kind animal health camps in four villages in the Zemithang circle. This initiative was conducted with the support of WWF-India, the National Research Centre on Yak, Dirang, West Kameng, and the Department of Animal Husbandry, Veterinary and Dairy Development, Lumla, Tawang. Many residents of Zemithang valley are semi-nomadic herders known as brokpa. In addition to losing cattle to diseases, the herders suffer huge losses due to wild animals attacks, especially by dholes, Himalayan black bears, and snow leopards. Access to veterinary care and compensation for loss due to wild animal depredation is lacking in the valley because of its remote location from the district headquarters.

During the camps, herders were provided medicines and health supplements for commonly prevalent livestock diseases such as diarrhea, tick and flea infestation, and malnourishment. The duo believes that such interventions based on local needs will go a long way in preserving the existing human-wildlife coexistence in Zemithang.

Dechin and Pemba also continued their conservation education and outreach by visiting Lumla Upper Primary School and Taktsang Middle Residential School where they delivered short talks on the importance of wildlife conservation to over 60 students and teachers. They also distributed children’s books provided by the Mud on Boots Project to the school libraries. 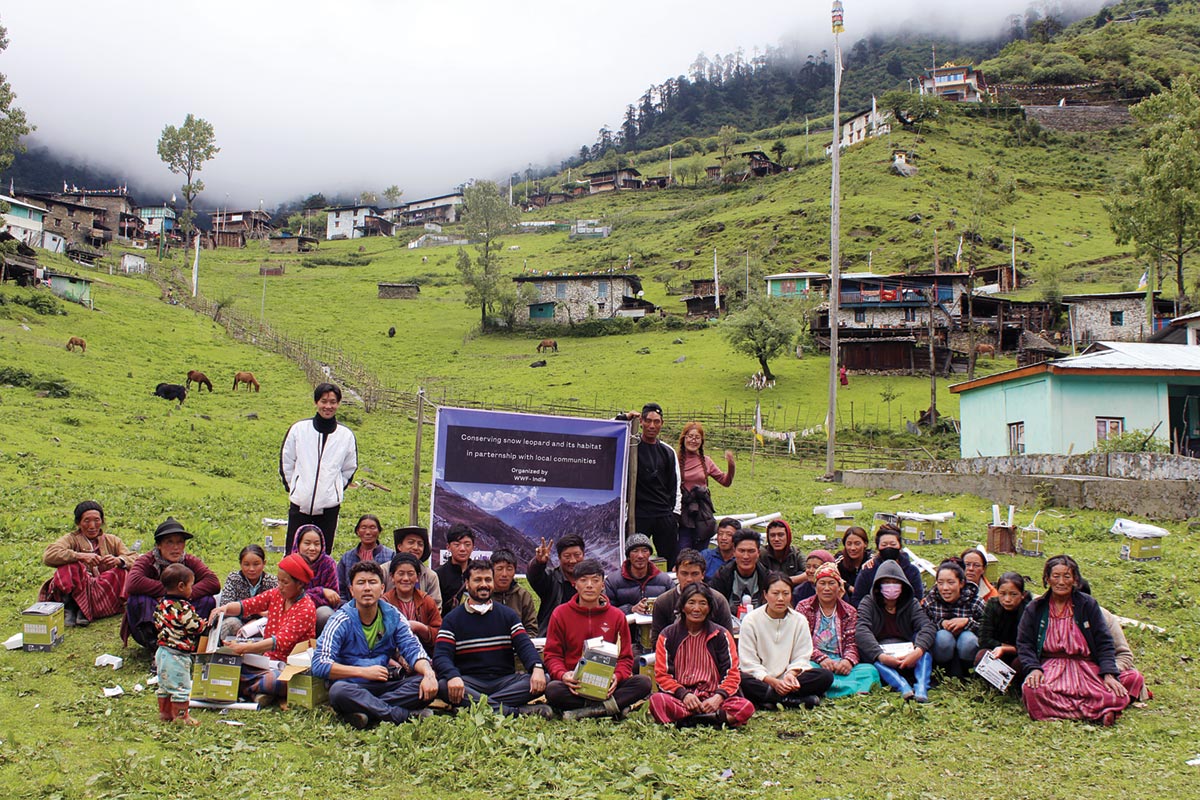 Further, they conducted a meeting with officials of the Indian army post in Zemithang circle where they spoke about their conservation-oriented work in Zemithang and Mago Chu. They also discussed ways to promote sustainable and responsible tourism as a complementary livelihood strategy for locals and the possible role of the Indian army in this regard.

Being the lone person coordinating all aspects of the long-term habitat restoration project in the vast and rugged landscape of Chamba, Himachal Pradesh, has been the single most challenging aspect of project leader Vishal Ahuja’s decade-long conservation career. In May 2022, Vishal was elated to receive help from members of the Zoo Outreach Organisation, Coimbatore, who joined him in field preparations for pre-monsoon plantations.

The team conducted a workshop for a women’s self-help group at Gajnui village and held a meeting with the Pradhan and ward members of Rathiyar Panchayat to create awareness about the importance of restoration of degraded forest patches. During both events, Vishal’s team highlighted issues such as fragmentation and degradation on account of human activities such as lopping trees for fuelwood and timber, forest fires, agriculture extension, and grazing. The team focused on understanding the causes of forest degradation and discussed potential solutions with locals through presentations and playful activities. Members of the self-help group agreed to plant saplings alongside their farms this monsoon season. A member of Rathiyar Panchayat also agreed to provide six bighas of his farmland for the plantation of wild native fruiting trees.

In the beginning of May, Vishal and his team held three meetings with the DFOs (Territorial and Wildlife Divisions) and held discussions on conservation issues in Chamba, ranging from habitat fragmentation and degradation, to the negative impacts of uncontrolled tourism such as plastic and garbage accumulation in and around the Kalatop- Khajjiar Wildlife Sanctuary. During these meetings, the DFOs assured the team of providing saplings for plantation during the pre-monsoon season. The team successfully organised a training session for officials of the Chamba Forest Department where they shared various aspects of conducting a census of the Himalayan grey langur. Later in June, they also met with the Principal Chief Conservator of Forests, Chief Conservator (Wildlife Division), and other officials at Dalhousie, Chamba, and submitted a five-year report on their studies on the Himalayan grey langur. 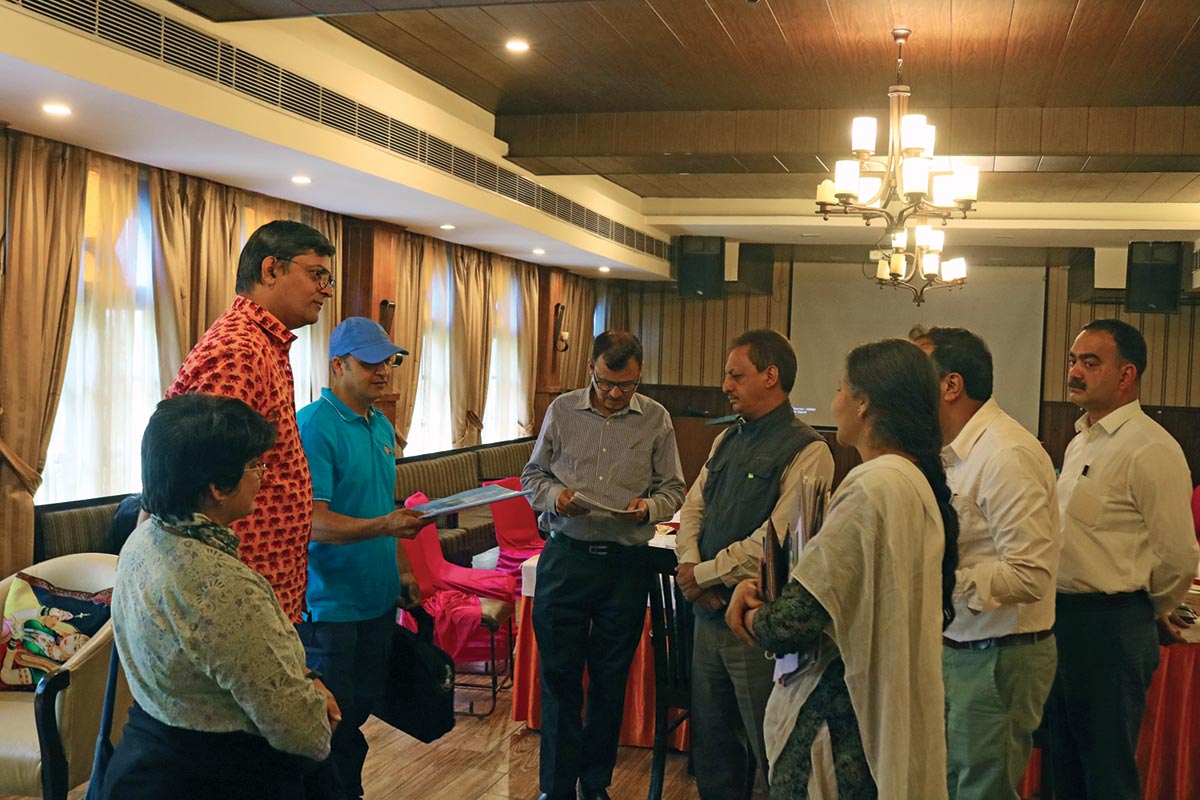 After completing all field-based activities for May-June, Vishal went on a 20-day long exposure cum field trip to learn about restoration and nursery raising techniques in Tamil Nadu, Puducherry, and Kerala. He spent five days working with and learning from experts at the Nature Conservation Foundation in Valparai, Tamil Nadu, about restoring degraded forests and about the technical aspects of raising nurseries of native plants. He then traveled to Pitchandikulam forest in Puducherry where he learned about different aspects of conservation, reforestation, and nursery management for three days before visiting the Niligiri Biosphere Nature Park located at Anaikatti, where he experienced the healing power of nature after it was enriched through native plantations.

This was a memorable trip for Vishal as he journeyed from the Western Himalaya to the Western Ghats and had the opportunity to walk amidst rainforests and tropical dry evergreen forests.

Hope is in the Summer Air in Pokhran, Rajasthan

In Pokhran, Rajasthan, Project Leader Radheyshyam Pemani Bishnoi has been relentlessly monitoring strategic locations such as areas under high tension electric wire lines, stretches of railway tracks, and highways passing through wildlife zones, as these continue to threaten the wildlife in and around the Desert National Park. Between May and June 2022, he rescued, treated, and released 12 wild animals (seven chinkaras and five nilgais), of which five were attacked by free-ranging dogs, while others were injured in road accidents. Radheyshyam, along with other volunteers and members of the Forest Department, also conducted three emergency patrols after receiving information, but the poachers unfortunately got away before the team arrived.

Radheyshyam led a small but dedicated team of volunteers to create seven new wildlife watering holes. The team also monitors wildlife activity here through camera traps and refills the watering holes if required. Such watering holes in open forests and/or grasslands are crucial in maintaining the well-being of wildlife, especially during summer. This also prevents animals from entering human settlements, where they face potential attacks by free-ranging dogs, poachers, and other challenges.

Radheyshyam also patrols and monitors the region’s open forests and grasslands. He has documented over 500 wildlife sightings, including the Great Indian Bustard (GIB), chinkara, nilgai, desert fox, and others. Despite the scorching heat, he was on a regular patrol on May 30, 2022, for hours, when, to his delight, he spotted a female GIB with a chick, the first of the season.

Although Jaisalmer district is the natural habitat and now the last stronghold of the GIB in India, Radheyshyam is aware that several natural and mostly human-made challenges threaten the future of this chick. However, it is his hope for a better future for the Great Indian Bustard and of other wildlife in the region that fuels and guides his conservation efforts.