The Mud on Boots Project is a booster programme designed to empower and support ‘mud-on-the-boots’ conservationists in India over a two-year period. The project focuses on those individuals whose conservation leadership potential is overlooked by large organisations and government agencies because of limitations such as the lack of academic qualifications, access to technology or language barriers. Through this project Sanctuary is enabling a network of on-ground conservationists across the country, each of whom is contributing steadfastly to biodiversity conservation and community engagement in distinct and measurable ways. Here, we compile updates from our Project Leaders for the months March and April 2022. 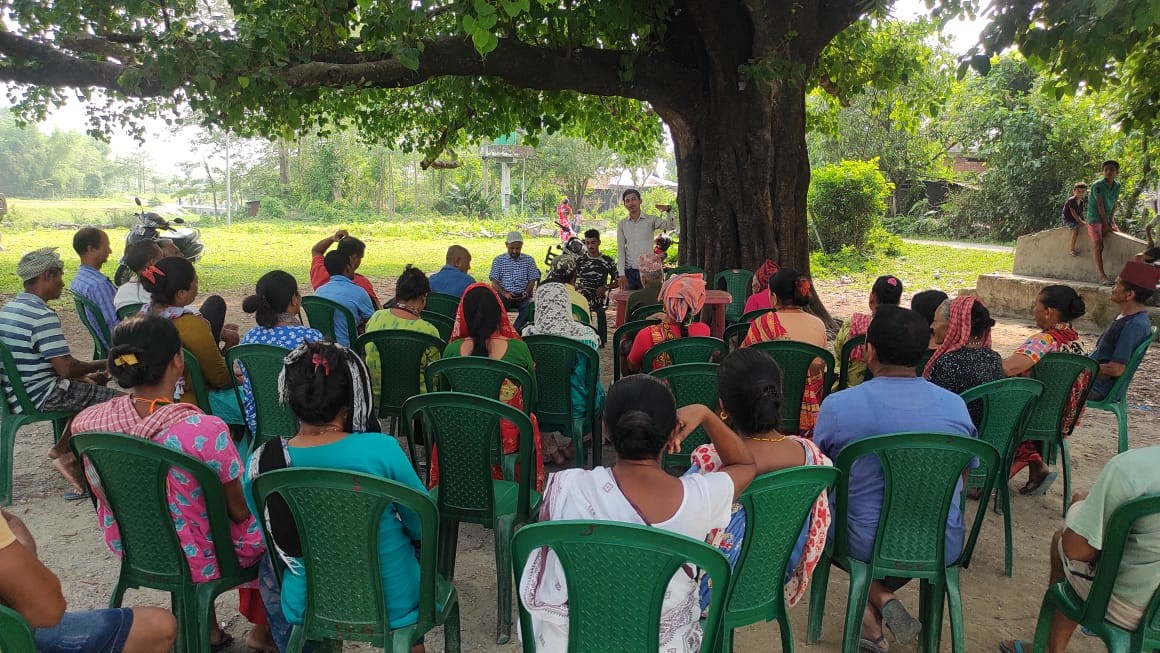 Amir Chhetri is seen addressing residents of Kalabari Village during one of his three conservation awareness campaigns conducted between March and April 2022. Human-elephant encounters are a common occurrence in the tea-estate forest mosaic landscape in the Dooars region of northern West Bengal. Photo courtesy: Tonmoy Mokherjee (Coexistence Project).

The tea-estate-forest mosaic landscape in northern West Bengal is home to human and elephant populations. The resident Rajbongshi and adivasi people believe elephants to be the embodiment of their god Mahakal baba, and accept some level of crop depredation and/or property damage as a natural consequence of living with elephants. In the recent past, though, the degradation of natural food resources for wildlife within forests and rapid changes in land-use of the region have aggravated negative human-elephant interactions.

Between March and April 2022, Project Leader Amir Kumar Chhetri organised conservation awareness programmes in three villages (Khairkata, Duramari, and Kalabara) where he shared information about elephant ecology, their food preferences, ways to avoid conflict, and persuaded locals against using live electric wires to deter elephant movement into villages. He also shared his personal experiences using community-managed solar fences in Panijhora forest village as human and elephant-friendly alternatives. Pamphlets about the legal implications of using live electric wires, and the need for peaceful coexistence with elephants were distributed and also advertised on strategic public places during all events.

All three meetings were conducted with the support of the Forest Department, Panchayat officer, Coexistence Project, and Society for Protecting Ophiofauna and Animal Rights (SPOAR), a local NGO. 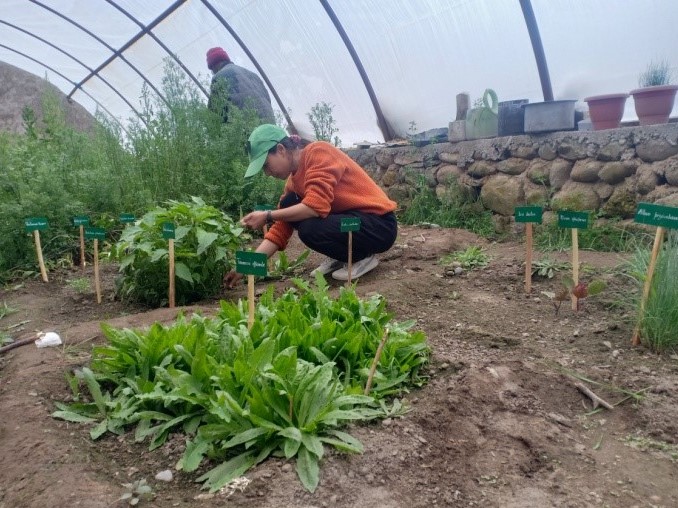 Project leader Phuntsog Dolma has been conducting trials on ex-situ propagation of important native high altitude floral species in the Pashmina Goat Farm in Upshi, Ladakh. The results of her trials will be crucial in informing and developing strategies to reduce pressure on pastures to conserve wild flora and livelihoods dependent on them.

Of the 17 most important high- altitude fodder plants sown by Phuntsog and her colleagues in February this year, 10 have shown successful germination so far. Phuntsog has been diligently monitoring and recording all developments and believes that the results will strengthen future studies and trials on high altitude flora in Ladakh.

Phuntsog also surveyed Rong valley to understand problems, perceptions, and probable solutions for pasture conservation in Rong valley. Armed with a short questionnaire, and informal qualitative conversations, she interacted with 30 local breeders and farmers and found that 90 per cent of locals believe that pastures and wild fodders in the region are threatened. She also learned that shifting/turn-wise grazing in pasture areas (a strategy recommended by Phuntsog based on pasture maps she prepared with the assistance of breeders and herders) is effective in encouraging the conservation of fodder populations within pasturelands.

Vishal interacting with members of farmer’s self-help group in Kakela village, Chamba District, Himachal Pradesh, where he shared the benefits of restoring degraded habitats for use by wildlife in the region. Photo courtesy: Vishal Ahuja.

Project Leader Vishal Ahuja has been working closely with communities around the Kalatop-Khajjiar Wildlife Sanctuary in Chamba, Himachal Pradesh for almost a decade now. Using knowledge generated from his long-term study on the diet preferences of resident Himalayan grey langurs and other wildlife, he has been leading a habitat restoration project to ensure human-animal coexistence in the region.

Vishal met with Pradhans of two Panchayats, the principal of the Government School at Saho, and members of two local NGOs Paryavaran Chetna Kendra, and Arpana Rural Community Health and Development Centre, to plan for conservation awareness and outreach talks that were held in May 2022. Vishal spoke with local farmers (most of them women) from various Gram Panchayat blocks and school students about the importance and methods of habitat restoration in Chamba. Through such events, Vishal hopes to raise community awareness and garner support for his habitat restoration project. Vishal also received trail maps of the Kalatop-Khajjiar Wildlife Sanctuary from the DFO (Wildlife), Chamba, and he is preparing to conduct a first-of-its-kind census on the life history and ecology of the little known Chamba sacred langur in June 2022.

Project leaders Dechin Pema Saingmo and Pemba Tsering Romo are passionate about protecting the three-kilometre long wintering habitat of the Black-necked Crane (BNC) along the Nyamjang chu river in Zemithang, Arunachal Pradesh. They believe garnering community support (especially that of the local youth and young children) by finding locally acceptable ways to protect the wintering homes of the BNC is key for long- term success.

With this aim in mind and with support from WWF-India (Dechin and Pemba’s affiliated organisation), they took their conservation outreach to the annual Gorsam mela (the largest local gathering attended by followers of the Buddhist faith across Arunachal Pradesh) where they set up a stall showcasing the rich biodiversity of Zemithang.

They also travelled to the nearby East Kameng district to conduct a conservation awareness talk for students of standard 11 and 12 at Government Higher Secondary School, Bazarline, Seppa. They were elated to see the curiosity of students (most of whom were girls) and are hopeful that a few of them will choose to pursue wildlife conservation for their higher education. 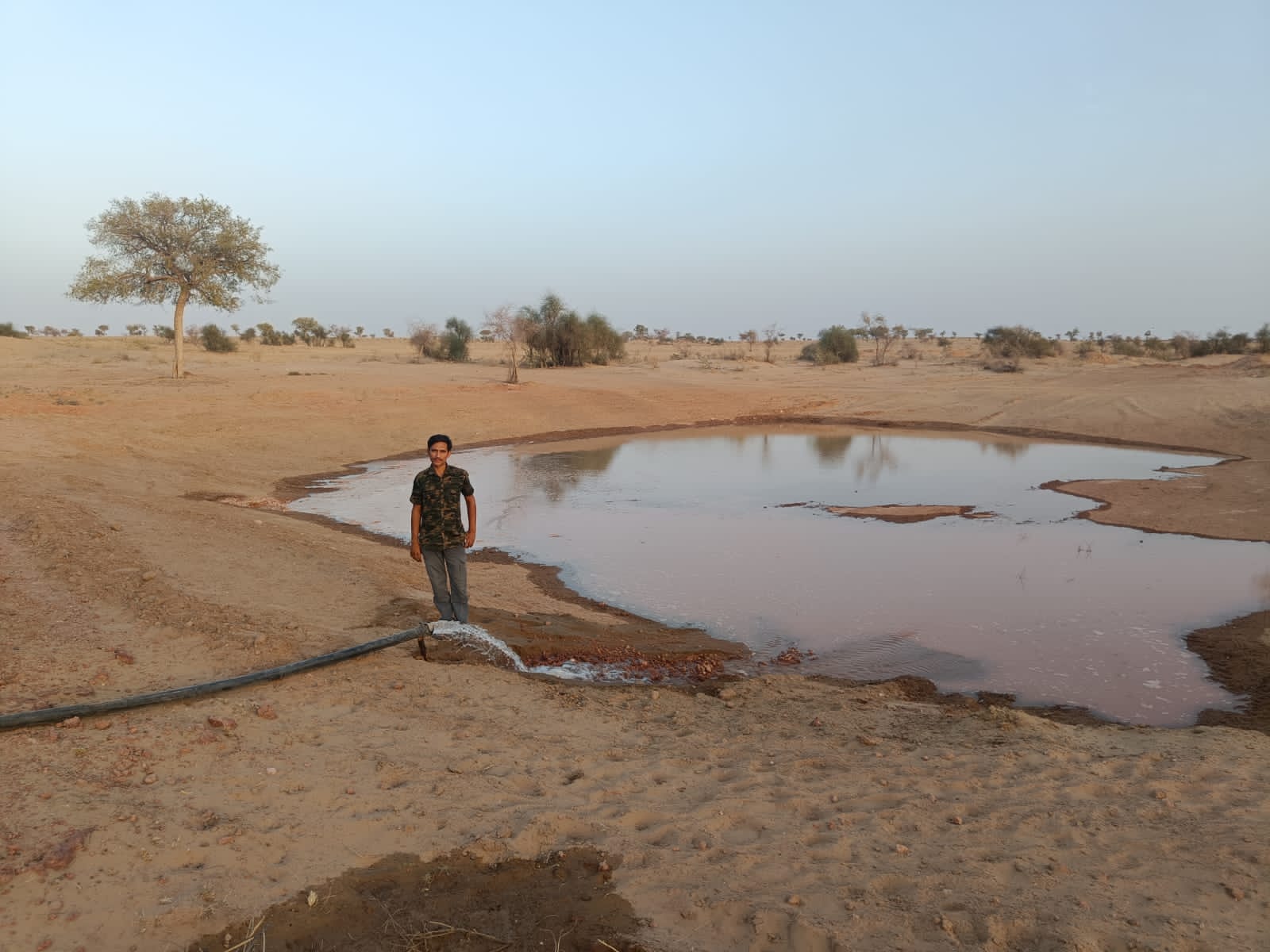 Radheshyam along with volunteers, locally active NGOs and members of the Forests Department filled six water holes for use by wildlife in the Pokhran region. Photo: Radheshyam Pemani Bishnoi.

The grassland-desert habitat landscape in Pokhran, Rajasthan, where the Bombay Natural History Society is undertaking critical studies to protect the grasslands of the Desert National Park and its surrounds, is home to a stunning diversity of wildlife, the critically endangered Great Indian Bustard (GIB) being one of its most well-known residents.

Between March and April 2022, project leader Radheshyam Pemani Bishnoi witnessed six road accidents involving wild animals (three chinkara and three nilgai were injured; one chinkara lost its life), three incidents of free-ranging dogs attacking chinkaras, killing one, and electrocution  of a Cinereous Vulture and a GIB due to collisions with high tension electric wire lines. He was quick to report all incidents to the Forest Department and cared for the injured individuals before they were released into nearby forests or taken to a nearby animal clinic. On April 18, 2022, Radheshyam submitted a memorandum to Bhupendra Yadav, Honorable Union Minister of Environment, Forest, and Climate Change, Government of India, appraising him of threats to the region’s wildlife.

Radheshyam worked with Forest Department personnel and volunteers from the Ecology Rural Development and Sustainability (ERDS) Foundation to fill waterholes used by wildlife, and conducted two emergency night patrols on receiving intelligence about potential poaching. Amidst several conservation challenges and the high summer heat, he continued patrolling the region to ensure the safety of Pokhran’s wildlife.