The most common spiders of the world, jumping spiders, make up 13 per cent of all known spider species. They have very distinct features such as four big eyes in the front and four other motion sensitive eyes all around their carapace. This gives them 360° vision!

Jumping spiders belong to the family Salticidae, which has over 600 genera and 6,000 species! They are diurnal creatures (active during the day) and unlike most other spiders that make webs to catch prey, jumping spiders hunt their prey by stalking and jumping to catch them.

Since they don’t need webs to catch prey, they use their silk for another purpose, to make a night shelter. Different species make different types of shelters. Some build a silk sheet under leaves, while others build one between leaves. Some very distinct spiders, such as the ant-mimicking jumping spider, build elaborate tubular shelters with multiple exits. 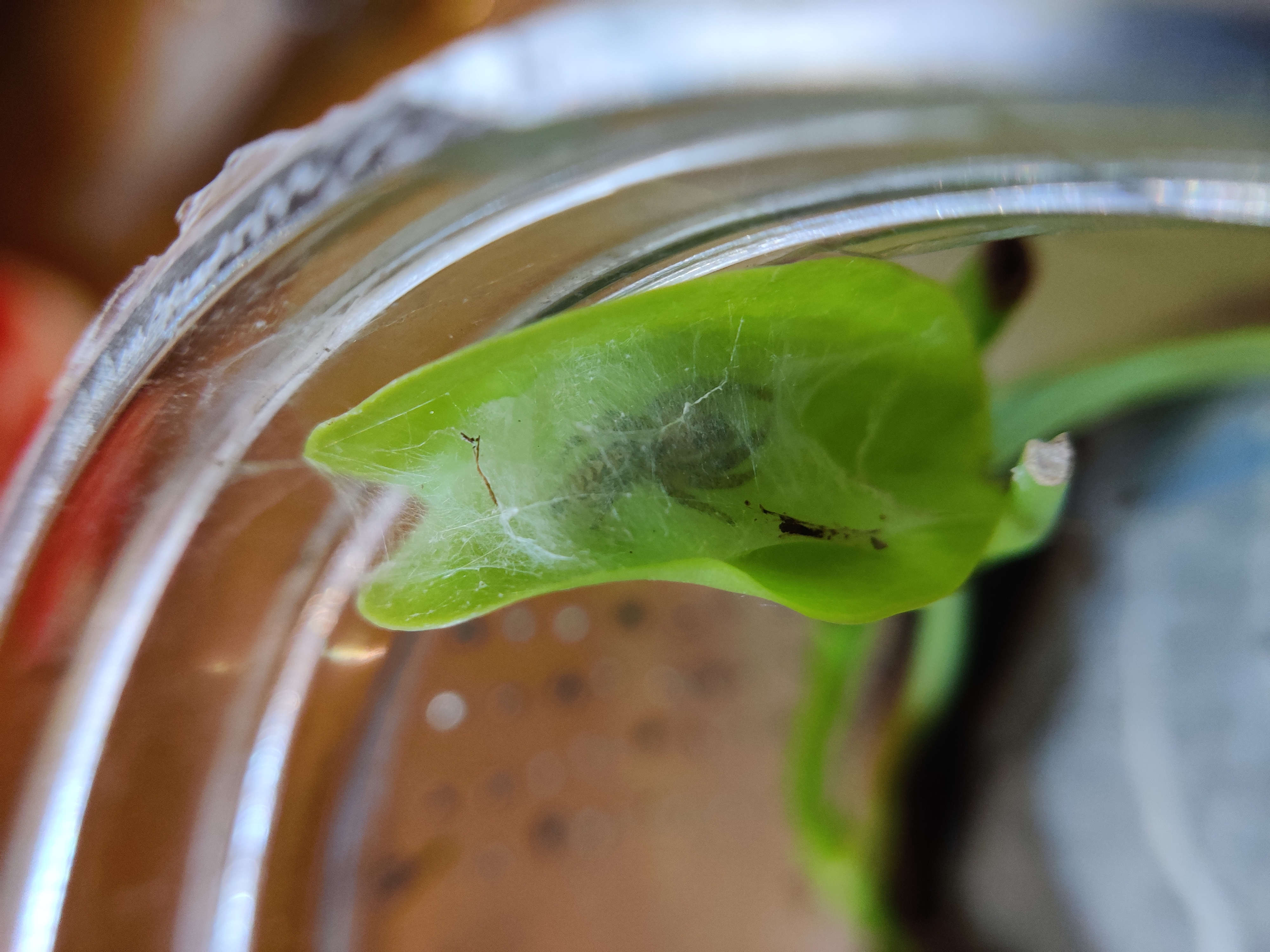 A web shelter on a leaf. Photo: Aman Acharya.

Some species also use their silk to create a lifeline, like a bungee-jumping cord, which saves them from falling if they miss their target during a hunt. This fascinating adaptation allows them to be distinguished hunters – they can catch flies midflight, or even escape predators by jumping from high platforms without risk of injury. Like most spiders, jumping spiders play a vital role in our ecosystem. They effectively remove pests and other insects such as mosquitoes, flies and mayflies.

I sometimes capture, observe, document and release these spiders, keeping them briefly in special enclosures at home. During this process, I have observed that some spiders have distinct personalities. They have different likes and dislikes in the type of prey (fly or worm). Some find places to sit/nest in the enclosure, some hide when I open the enclosure, others run out and enjoy exploring my hand.

One of the jumping spiders that I had briefly brought home laid eggs in the enclosure. She guarded her egg sac for over a month, leaving her retreat only once to eat. After the jumping spider slings (spiderlings) hatched, they were jumping all over the enclosure. I let them out and their mother in different parts of my garden to ensure that some of them would survive.

A jumping spider’s stare is quite intense! Photo: Aman Acharya.

I kept one to raise, and I named him Lucifer. I raised him from first instar (baby) to adult. When jumping spiders are babies, they are extremely curious and ferocious eaters, attacking any prey that they see. Other than being extremely adorable, they wouldn’t have yet figured out how to jump and land properly. They end up missing their target and tumbling around quite a lot. That is why females usually have up to 30 eggs per egg sac, and three to four egg sacs after mating once. This greatly increases the chances of the next generation’s survival.

Jumpers get less and less ferocious as they grow, but much better at jumping. At this time, they develop their own personalities. Lucifer liked to hide in dark corners, that is why I gave him an old jaw bone to hide in, and he loved it. He preferred eating mealworms, but happily attacked flies when given the opportunity. He also really enjoyed climbing on my hand, but always jumped back into his enclosure when I got too close. It’s truly amazing to see that invertebrates, barely a centimetre long, have such distinct personalities. 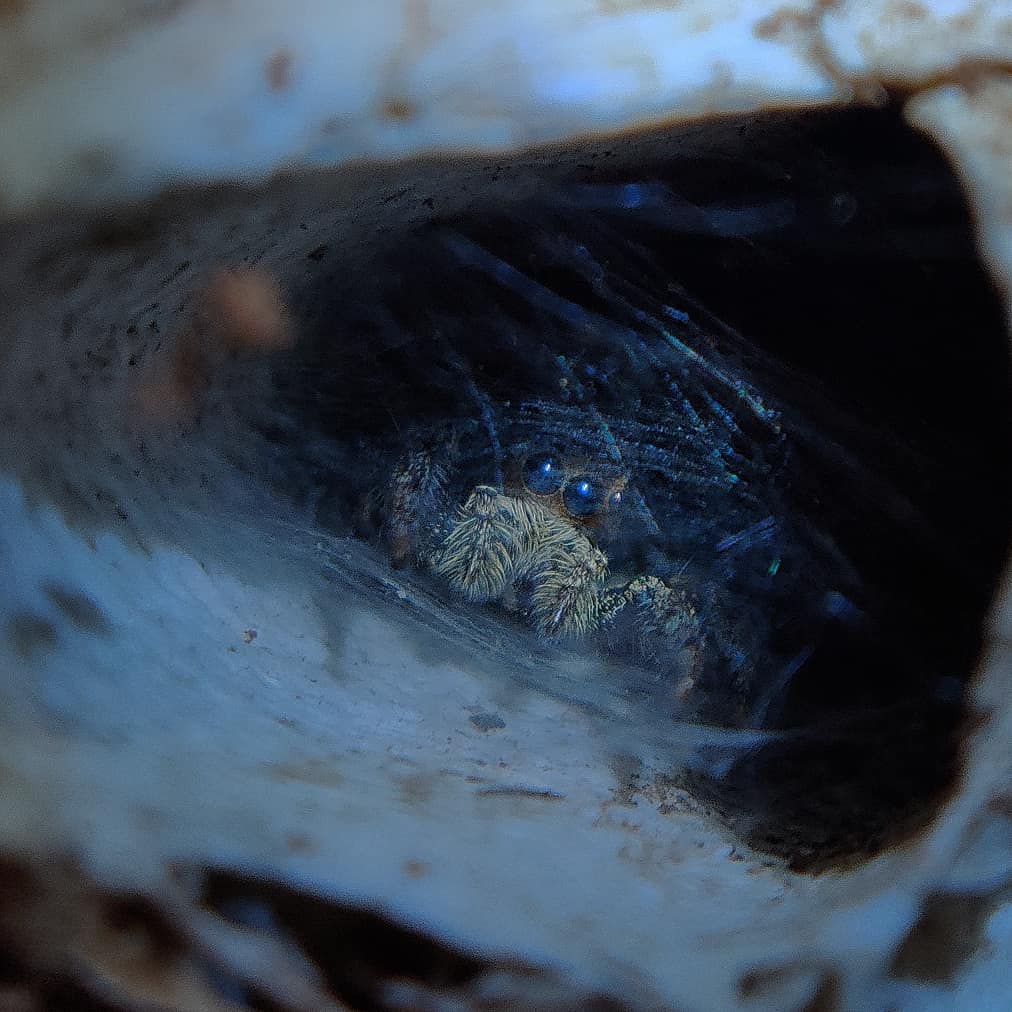 When Lucifer became an adult, he was extremely comfortable with me. He would come and relax on my hand without jumping all over the place. Lucifer also successfully mated with a female I found outside, who laid eggs for another generation – over 100 babies overall. I released the jumping spider babies back into my garden (the same place I found the mother).

Lucifer’s enclosure itself was big and spacious. I used a big plastic box, made holes on the side and top, added mud at the bottom. I also kept a small plant and a few items that he could use to make his nest in, such as the jaw-bone, or a fake flower. If someone wants to keep a spider, you can follow what I did above. Feed it once a week, keep it out of direct sunlight and mist some water on one side of the enclosure every few days. If you do keep a spider, make sure to let it go after a week or so. That way you won’t disturb the ecosystem in your garden, and will ensure that the species will thrive.

Aman Acharya, 17, has been observing insects and arachnids ever since he was young. He is currently applying to pre-veterinary and animal science undergraduate programmes to pursue his passion for entomology and zoology.