Forest fires raging in Dachigam National Park, Kashmir, since Sunday were finally put out thanks to the combined efforts of field staff of the Department of Wildlife Protection, J&K, and people from the surrounding communities.

On August 16, 2020, at around 5:00 p.m., forest fires broke out in two-three ridges inside the park, near the area called Tatahlibal, adjacent to Mulnar village. The fires were reportedly caused due to a prolonged and continuous dry spell the region has been experiencing this year. Temperatures on average have been soaring to 33°C-35°C, which is very high for the region during this month, over the past 20 days. Located at high altitudes, the sunlight is harsh and scorching, which led to drying of the bush and grass.

A news report on The Kashmir Monitor says there were no casualties and crop damages. However many first responders had sustained injuries in the process. 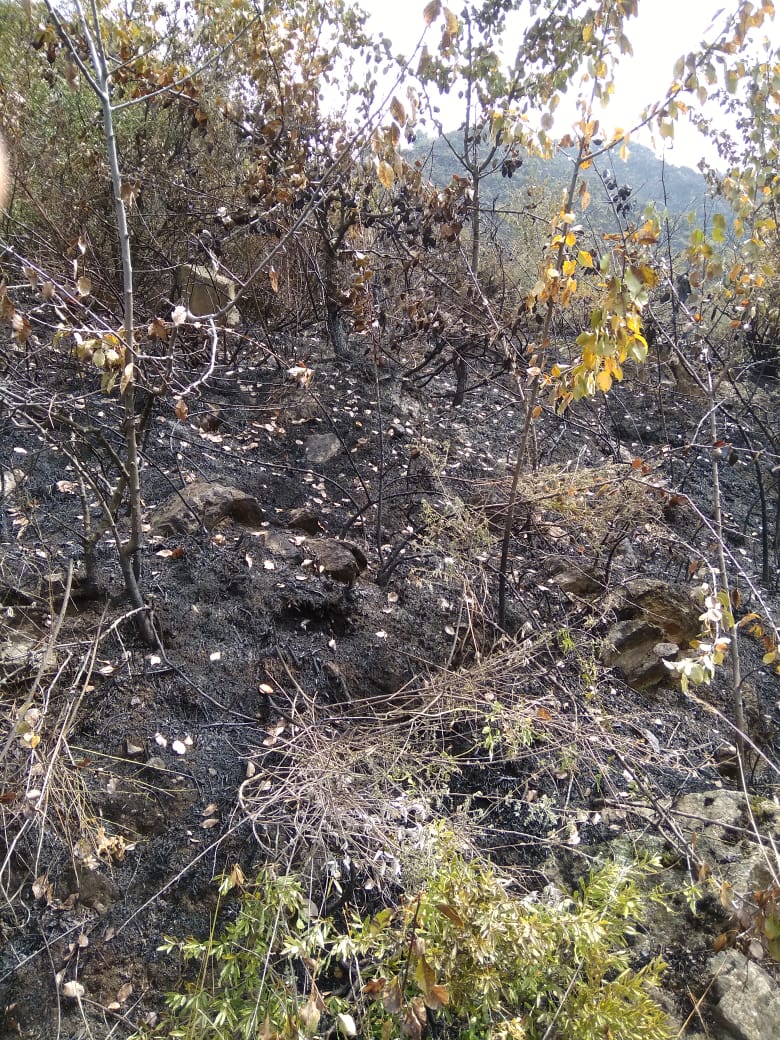 Burnt grass and shrubs after the fire was doused. Photo: Anonymous. Used with Permission.

Dachigam is a national treasure nestled in the beautiful state of Kashmir. Spread over 141 sq. km., it is home to the magnificent hangul or Kashmir stag, and other animals such as the elusive snow leopard, marten, ibex, musk deer and more. "Dachigam National Park acts as primary and the most crucial habitat for the critically endangered hangul. If it collapses due to incessant fires, the adjacent conservation reserves and wildlife sanctuaries will follow the suit," said Aamir Mushtaq Wali, Chief Executive Officer, Wildlife Conservation Fund. He added that it is thus vital to form an inter-departmental First Responders squad, who will be lead either by the DFO Wildlife or Forest, and they should be well equipped with basic safety and fire dousing equipment. "I have seen many fires, mostly grassland fires, but this particular one scared me. Most of my concern was for the trees, which rarely grow in this terrain and if destroyed, their regeneration process will be difficult as this particular terrain is facing south," he said, adding that he would like to acknowledge the crucial role of the Department of Wildlife Protection, J&K in dousing the fire, especially the frontline staff.

“I must acknowledge the role of all those unsung heroes who suffered minor injuries and also like to state on record the role of high level officials including the Divisional Commissioner Kashmir, PCCF, Chief Wildlife Warden, FPF, District Magistrate and other allied Departments who responded. The casual labourers of the Department of Wildlife Protection deserve special appreciation,” said Nadeem Qadri, Environmental Lawyer, High Court, J&K on a Facebook post. “Wildfires are natural phenomena but sometimes man-induced fires can cause irreparable damage to the unique biodiversity of the Dachigam landscape. Our forests are more vulnerable due to many factors -- climate change, rise in temperatures and also anthropogenic pressures.”