No Climate For Fig Wasps

It was a terrible 480C outside and we were hoping for the huge male tiger to make his move from a cool, shady and well-watered forest patch. However, it had good reason to remain there. It was the end of May and the Ranthambhore Tiger Reserve, Rajasthan, seemed like a brick kiln. We were thankful to those well-shaded valleys such as Bhakola that made the temperature just about bearable and for this reason the 20-odd-kids accompanying me were uncomplaining. Scanning the lush foliage of jamun Syzygium cumini and gular Ficus racemosa trees, we were able to see the striped coat of the tiger who was dozing in the water. As he seemed in no hurry to move an inch or even open an eyelid, I asked my guide to park the vehicle in the stream ahead. We had a good two hours before closing time and decided to stay there. Above us was a verdant green canopy, so very typical of Ranthambhore’s famed valleys. I felt a light shower of pale white particles on me and looking up, I found honeybees frantically collecting pollen from the jamun flowers. Everyone who knows the shaded heaven of Bhakola is familiar with the numerous beehives hanging in the canopy. I pointed out the floral shower to the kids and we watched the bees at work. The tiger did not leave its cool sanctuary, but eventually the clock did force us out.

On my way back, I noticed a few dead honeybees in the vehicle. A bit ahead we came across a dead Red-vented Bulbul on the road. No, it had not been run over, but seemingly had dropped dead. I pointed it out to our guide who said it’s quite common to see scenes like these in Ranthambhore during the summer.

It was the heat that got to those frail life forms. 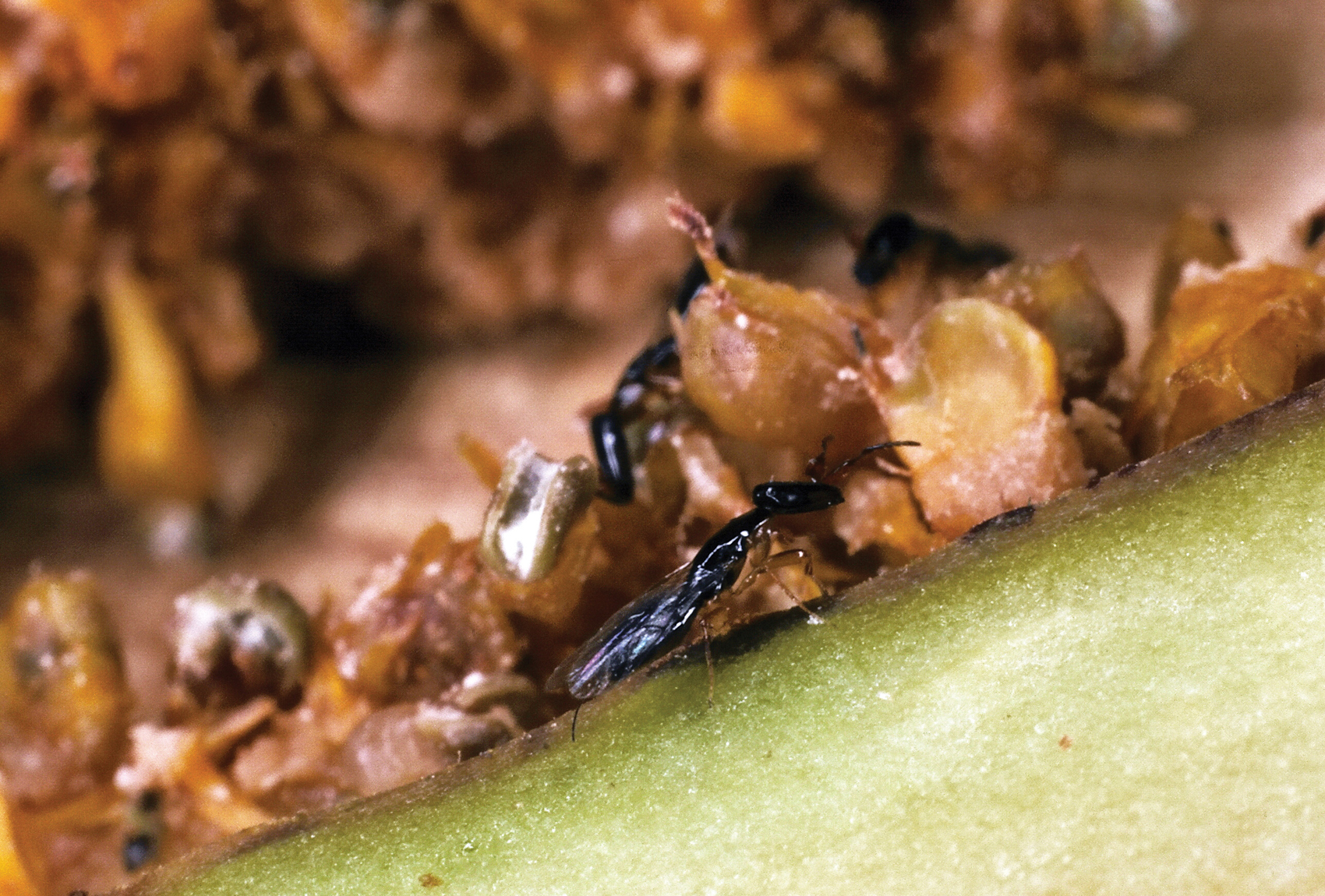 Female fig wasps are at work, laying eggs within an inverted inflorescence (what we call the fruit).

Sunstroke, or heat stroke, typically occurs when our bodies are subjected to prolonged high temperatures. The normal temperature of the human body is expected to be around 360C. A major deviation causes the human body to shiver, sweat or otherwise react to bring the body temperature back to normal.

Most of us are aware of the term thermoregulation. But, what exactly happens when the body temperature rises and remains unregulated? To put it simply, when the human body temperature rises above 410C, it affects a vital constituent of the body – proteins, the building blocks of life, found in all living creatures. Large biological molecules, a complex and diverse array of proteins enable humans to respond to stimuli and are literally what causes our hearts to beat. So much so that after water (H2O), proteins are the largest component of our bodies with more than 20,000 different protein molecules identified. They are clearly vital for life, but they are fragile and cannot withstand unacceptably high temperatures without getting irreversibly modified or ‘denatured’.

This denaturation of proteins is recognisable in many different ways. For instance with cheese, or egg omelettes. When you heat milk in the presence of a suitable acid, it solidifies (instead of evaporating) and this is what gives us cheese. Likewise, frying an egg in a pan denatures the egg protein and you get an omelette. Denaturing is irreversible and in some instances, even a small rise in temperature can denature proteins, which are clearly very vulnerable to heat. And that’s what happens when sunstroke strikes vital proteins in the human body and are denatured, causing permanent, and sometimes fatal damage. As in humans, protein components in other organisms are equally fragile and vital to life processes.

That I knew was what had probably killed those bees and the unfortunate bulbul on that searing Ranthambhore afternoon. 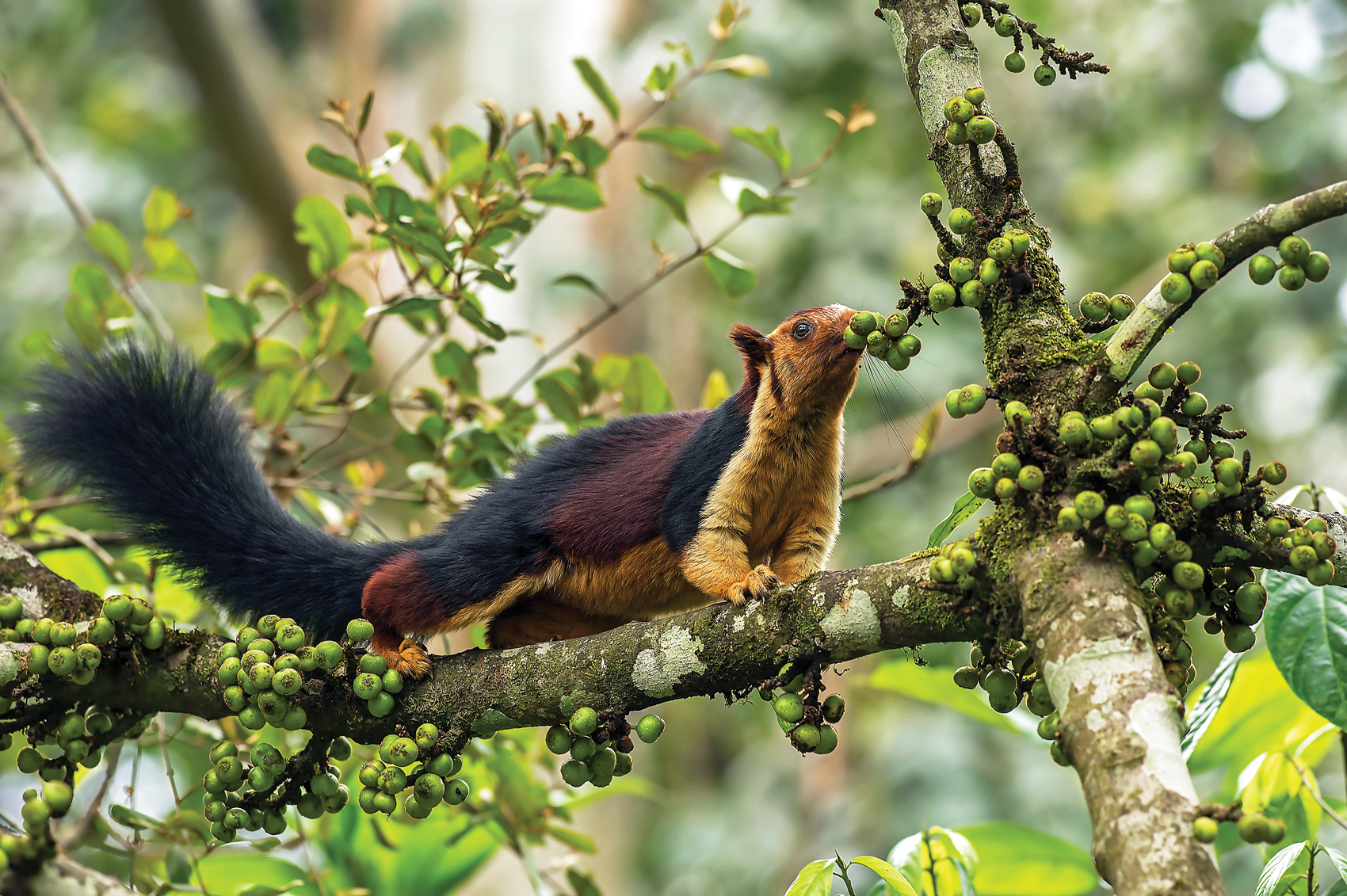 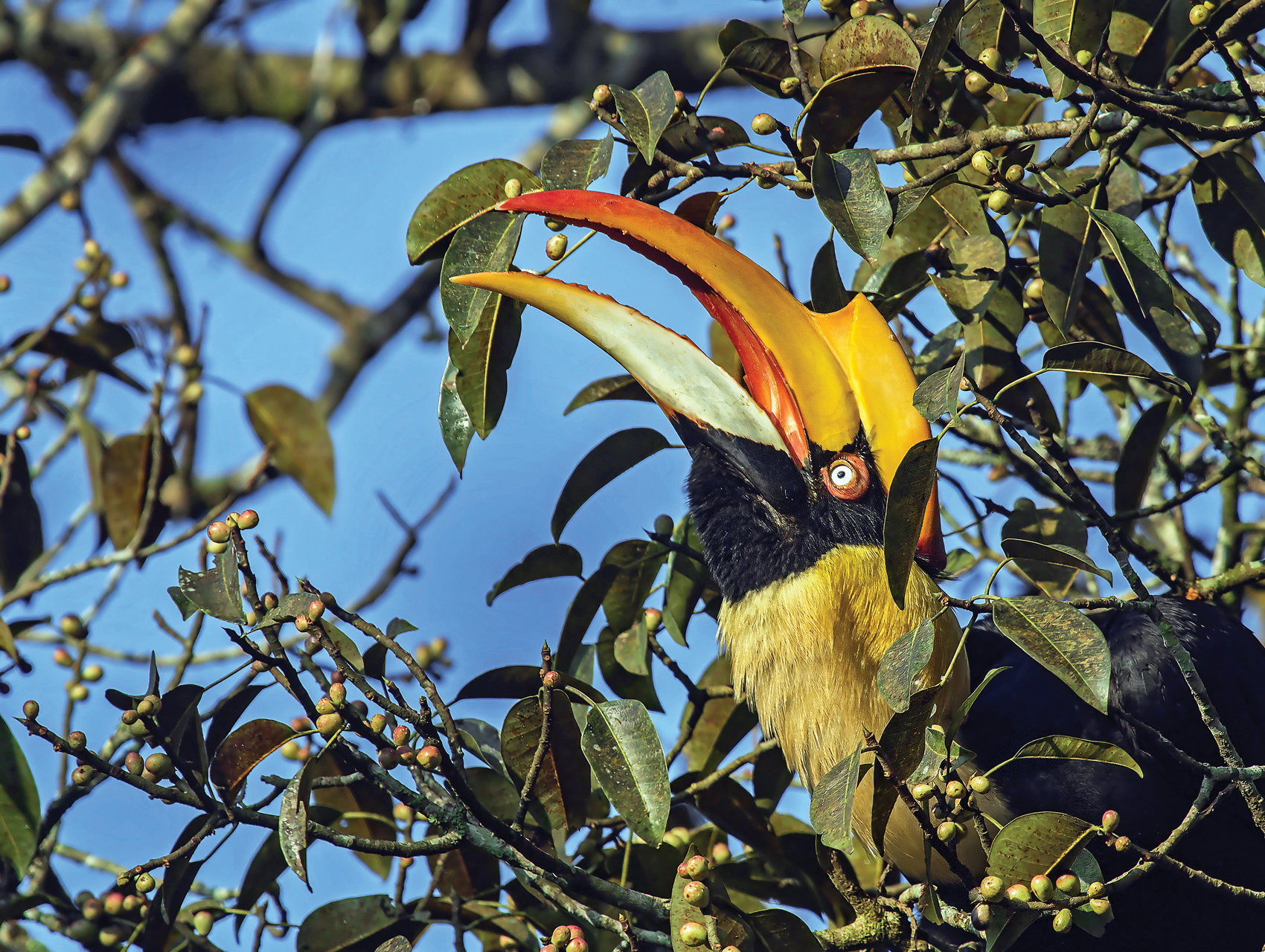 Studies show that hundreds of vertebrates rely on figs as their primary food source. This includes the Indian giant squirrel (top) and the Great Hornbill (above), two of several charismatic fig-dependent creatures.

WHO CARES A FIG?

We share this planet with creatures much, much smaller than bees and most of them play critical ecological roles, no less important than the tiger we saw sleeping in the cool stream. Let’s take the example of a fig wasp, a tiny flying insect (only females can fly!) measuring no more than a few millimetres in length. Don’t get fooled by their size though! They are a ‘keystone’ species that perform ecological services that no other animal can. They pollinate fig trees (genus Ficus). Anyone who has spent time in Ranthambhore will confirm that much of their time is spent watching the birds and animals attracted to the massive fig trees that stud the forest. Crucial, often irreplaceable food sources for wild fruit-eaters, these trees are fascinating links in the food web of the forests in which they are found. And in the case of the fig wasp and fig tree, the partnership actually guarantees food availability for an incredible range of animals from ants and bees, to monkeys, birds and deer virtually throughout the year. In turn, each of the fruit-eaters ends up dispersing and thus propagating the fig tree.

That’s not all. Since most creatures eat a variety of fruits (not the fig wasp that only feasts on figs!), they end up dispersing uncounted other fruit-bearing plants too. Botanists and biologists confirm that, worldwide, something like 1,200 vertebrate species depend primarily on figs to survive. And, imagine that, all are therefore dependent on the tiny fig wasp, since no other life form on Earth evolved to pollinate fig trees. As classic an example of mutualism as anyone could ask for, the relationship of fig trees and their wasps has been in existence for at least 60 million years!

As might be imagined, the intricate co-evolution between the plant and its sole pollinator is extremely specialised. Male fig wasps are wingless and their entire life cycle is therefore completed within the fig fruit itself. Only female fig wasps can fly and move from one tree to another. Given that they are barely a few millimetres in size, the tiny insects seem to be restricted from flying great distances in the quest of other fig trees on which they must feed, then pollinate.

Let’s come back to the problem of heat-susceptibility. 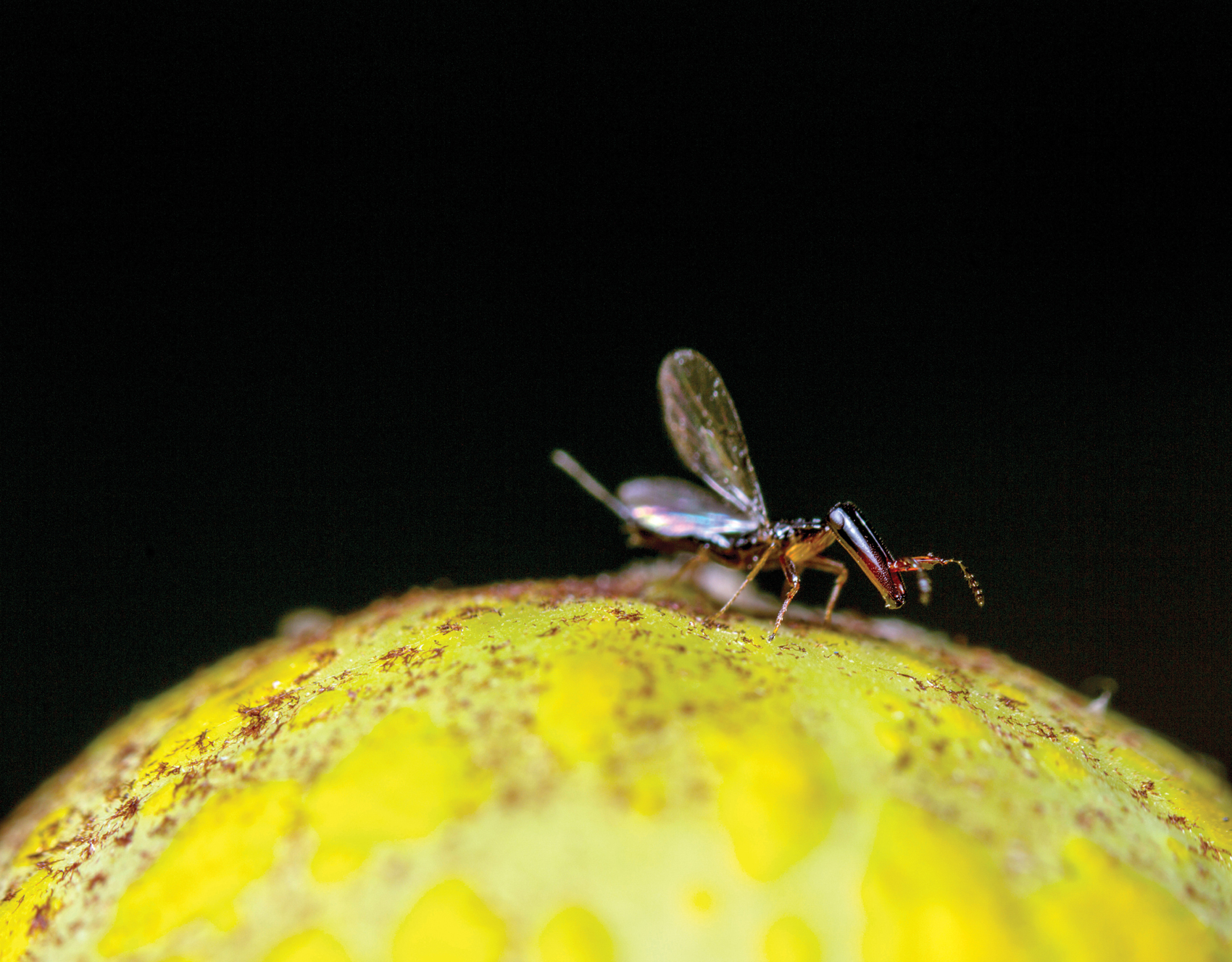 The fig wasp is one of the most underrated keystone species despite its crucial ecological service of pollinating fig flowers. It is the only known pollinator of figs in the natural world. The mutualism between fig wasps and fig trees is one of the best examples of symbiosis.

Thanks to human activities, every life form on Earth is being forced to contend with climate change at an unprecedented pace. Average temperatures are rising worldwide and the summer of 2015 was officially listed as the hottest ever recorded in human history. A team of researchers, led by Richard Corlett of the Xishuangbanna Tropical Botanical Garden in China’s south-western Yunnan province, revealed the disturbing fact that rising temperatures will significantly reduce the average life span of fig wasps.

If you think this is not a big deal consider this. At around 27 0C, the average lifespan of the fig wasp (female) is around 24 hours but the lifespan of these wasps decreases as the mercury rises. At 31 0C, their life spans drop to 18 hours. At 34 0C, the life expectancy is reduced to under six hours! This leaves female figs wasps much less time than they need to reliably find a suitable fig tree in which to bring up her brood, and, to pollinate the figs in the process. This means that fewer figs are available to the 1,200 or so vertebrates that depend on figs for something like 60 per cent of their diet.

Scientists are now working out how and whether fig wasps might be able to adapt to steadily rising global temperatures. It is probably one of the least-known impacts of climate change, given the attention that melting glaciers and rising seas understandably command, but despite being ‘off our radar’, the phenomenon could well aggravate an already dangerous problem of biodiversity loss.

The fig wasps’ shortened lives are probably a result of conditions they suffer that are comparable to heat strokes in humans. It may be attributed to the denaturing of vital proteins subjected to high temperatures. And it’s not just fig wasps that are affected by rising temperatures. The deadly heat wave of 2014, in Australia, showed us that even those who feed on figs are at risk. The heatwave in Australia caused thousands of flying foxes (fruit bats) to literally drop dead from their tree roosts. These bats are amongst the largest consumers of figs and therefore important dispersers as well! Why, I wonder, are we ignoring these ‘canaries in coal mines?’ Why is it that we ‘don’t give a fig’ about climate change, the greatest-ever threat to life on planet Earth? 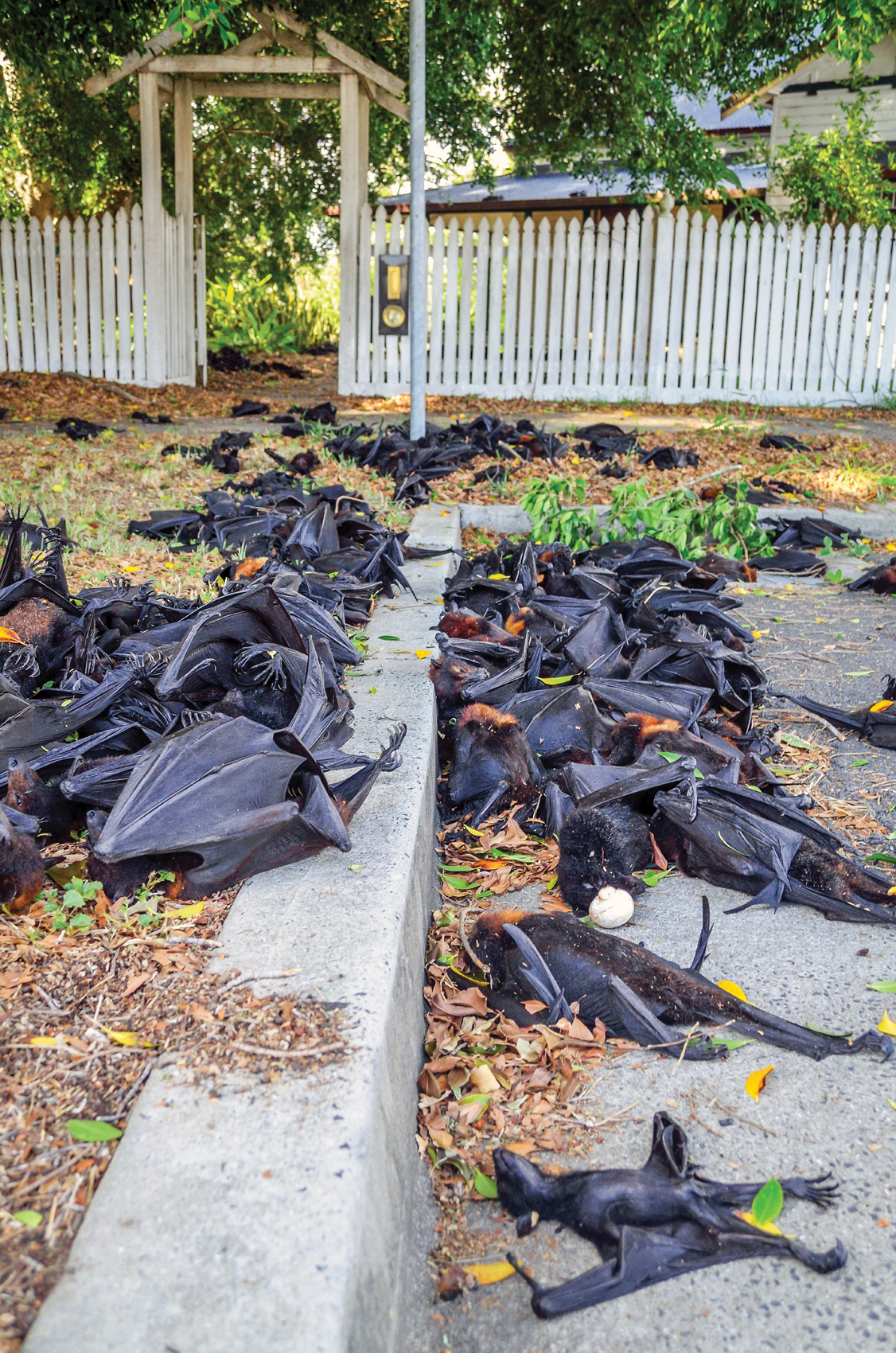 It amazes me that Homo sapiens, literally ‘man, be wise’ can be so foolish as to not read the signals being sent to us by nature about the impact of anthropogenic climate change, particularly signals as obvious as the plant-pollinator mutualism as represented by figs and their wasps.

As a naturalist with an uncommon love for wild nature, I have the fullest faith that the fig wasps, fig trees, fruit bats, that tiger in Bhakola I saw with the kids in Ranthambhore, honeybees, birds and more are already busy repairing the damage we are inflicting. In fact, all living creatures, without the benefit of global conferences such as the hopelessly inconclusive COP 21 in Paris, began adapting to a changing climate ages ago, even before we discovered the problem we created for ourselves. Some are migrating to cooler climes at higher altitudes. Others are descending to deeper depths in our oceans. And still others are changing their behaviour subtly to expose themselves as little as possible to the altered heat and humidity.

As for us, we seem caught in the clutches of apathy and avarice and it is my considered, forlorn  view that human societies are destined to be ‘denatured’ beyond reconciliation.

Evolutionary Miracle
There are more than 800 species of fig trees and each is pollinated by one or two species of fig wasp. A wasp will collect pollen from one fig tree, fly off with its booty stored on the underside of its body in pollen pockets to another fig tree flower of the same species where it is then delivered. The discovery of the oldest-known fossil wasps in England revealed that this relationship has been around for almost 60 million years. Microscopy techniques confirmed that the fossil female fig wasps have the same fig-entry and pollen-carrying anatomical characteristics as modern species. Even the pollen in the fossil specimen is typical of modern Ficus trees. The fig wasp and the fig tree’s symbiotic relationship shows an incredible mutualistic stability (it has not changed for approximately 30 million years) – a rare example of stasis in natural history. The stability of one member has helped to maintain the stability of the other.

Naturalist at heart, Shardul Bajikar has been involved in science, natural history, conservation and education for over a decade. Along with friends and the National Education Foundation, Pune, he recently launched the magazine Adventure - Sports and Beyond.