At 5:15 a.m., the soft rays of the sun provided just enough light to see the path ahead. We were headed towards the trail where my field assistant Datta Asawale and I had set up camera traps, in the forests of the Bhimashankar Wildlife Sanctuary in Maharashtra. After around 40 minutes, we reached the trailhead, and followed it as it led us towards the grasslands of the upper plateau. By now, the sun had risen well above, and our feet and trousers, soaked wet from the dew, got the much-needed warmth we sought. The grassland slopes gave way to Strobilanthes. A faint rustle stopped us in our tracks. The foliage obscured any view of the perpetrator. A thrill shot through me. Could this be the animal we had combed these forests for over the last 18 months and which had graced our camera traps with a sighting just four days ago? Or was it perhaps a black-naped hare, common in the area?

The nature gods had decided to smile upon us. Aware of us, a pangolin emerged, standing on his hind legs, forearms folded in a reticent namaste-like gesture. Though the pangolin has relatively poor eyesight, its strong sense of smell would have picked up our presence. We stood in silence… I had finally seen an Indian pangolin in the wild! 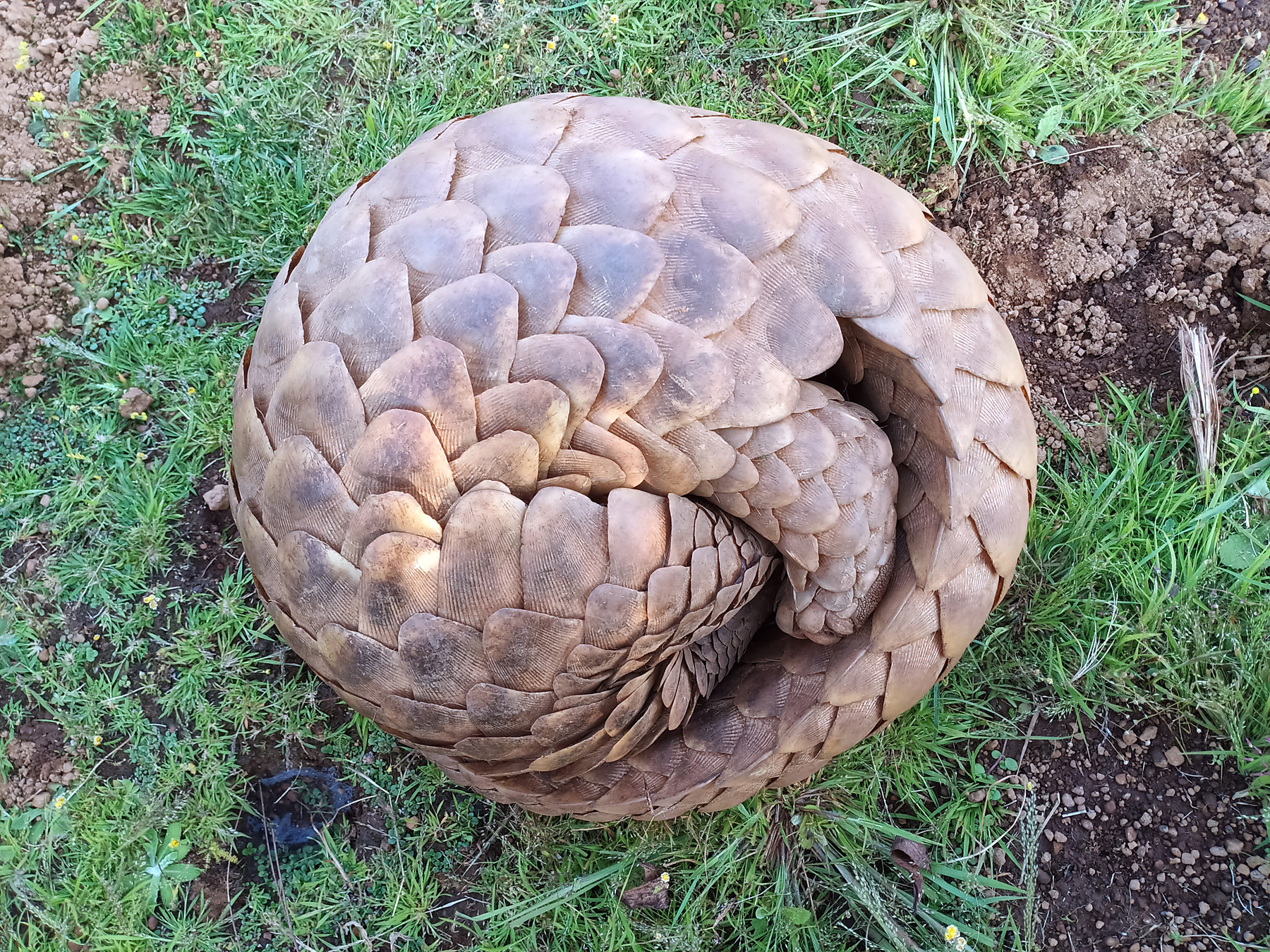 The Secrets of Bhimashankar

Apart from our scheduled systematic fieldwork, Datta, who was from the local tribal Mahadev Koli community, and I had spent countless hours in the forest hoping to catch a glimpse of the pangolin, often surviving on just one meal a day. We had completed 400 camera trap nights and my GPS recorded 300+ km. of walking across the difficult plains.

Previously, living with and studying tigers in the Melghat Tiger Reserve of the Satpuda hills, I had grown accustomed to long days in the field. It was an epiphany that prompted a change in the location of my fieldwork. It is true that under Project Tiger, thousands of kilometres of pristine forests and habitats of many endangered and threatened species have been saved. However, outside the Protected Areas and even inside some PAs, many smaller species have been wiped out due to anthropogenic pressures. In Maharashtra, for example, birds like the Great Indian Bustard have almost vanished. Today, many smaller, less charismatic species desperately need conservation attention. The pangolin is one such. 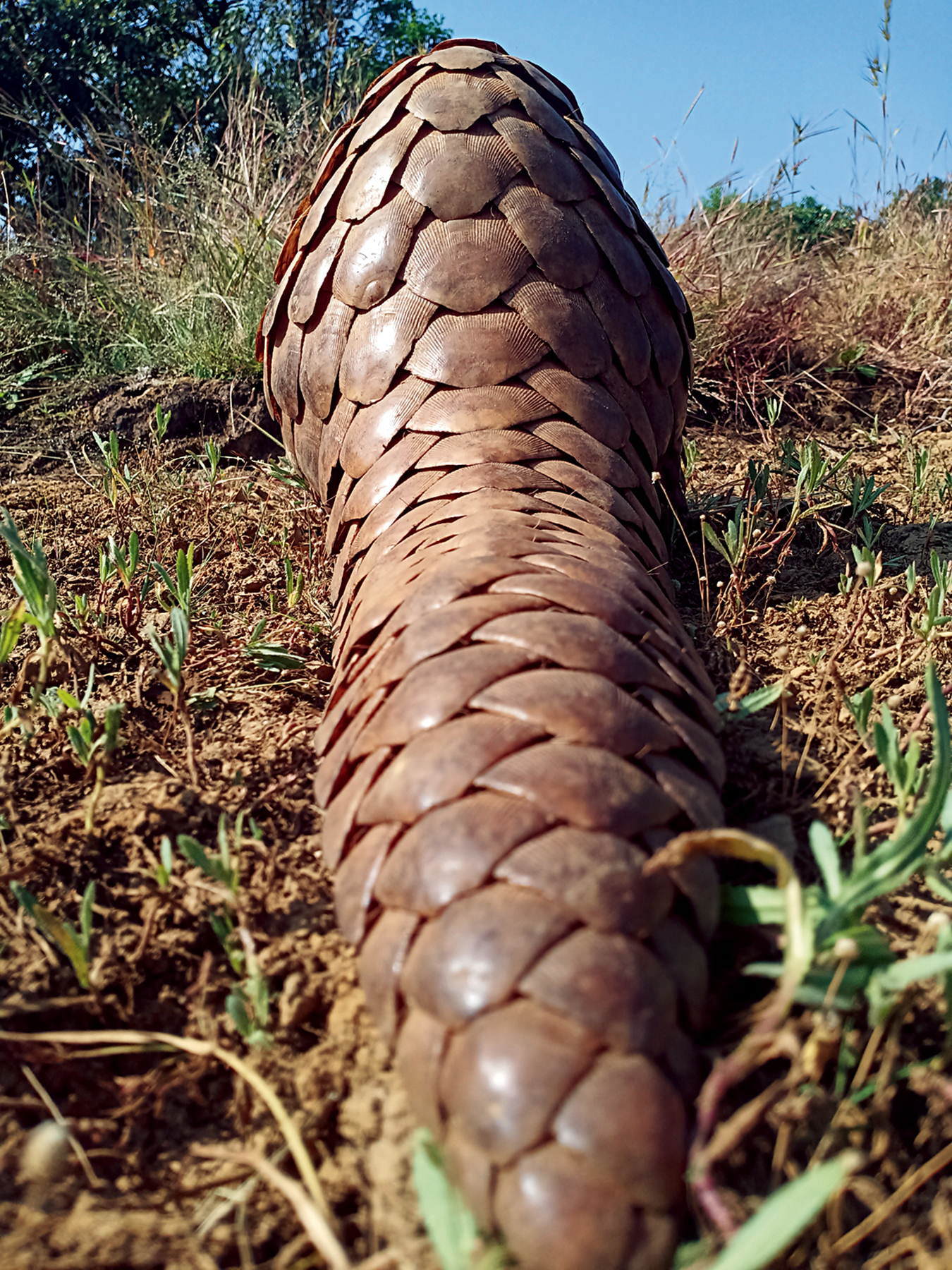 The author’s memorable encounter with a pangolin in the wild was the result of months of painstaking surveys and camera trapping efforts. Photo:Tushar Pawar.

All eight species of pangolins – four in Africa and the other four across the Asian subcontinent – are listed as Vulnerable. India is home to two. The Indian pangolin Manis crassicaudata is found in most parts of the country except arid regions, high altitude regions of Himalaya and in the Northeast. The Chinese pangolin Manis pentadactyla is restricted to the Himalayan foothills of northern Indian states. Both are Schedule-I species under the Wildlife (Protection) Act, 1972. According to TRAFFIC, in India, around 5,772 pangolins were poached between 2009 and 2017 (see The Pangolin Crisis) Possibly a million pangolins have been killed worldwide in the last decade. These numbers do not take into account hunting by local communities for subsistence. Despite being the most trafficked mammal in the world, surprisingly little is known about its ecology. After a long search, I obtained the necessary funding and permissions and began my *fieldwork in the Bhimashankar Wildlife Sanctuary.

Pangolins are shy, elusive nocturnal mammals that are crucial to the ecosystem. A healthy pangolin may consume as many as 70 million ants and termites per annum. Photo:Kamlesh Thakur.

An Encounter to Remember

In March 2019, we began an occupancy survey to map the status and distribution pattern of the Indian pangolin and to prepare a community-based long term action plan for conservation based on threat assessments.

We walked trails daily, recording the many pangolin burrows. They spend the day in burrows, emerging to forage at night. Burrows are generally built on hill slopes covered by dense shrubs, sometimes under large rocks. Finding such burrows was difficult and physically challenging, but my field assistant Datta was as keen a walker as I. After the first phase of our survey, we began setting out camera traps along trails where their activity had been recorded in earlier surveys. Three months of intensive camera trapping later… still no sight of a pangolin. Secretive animals, they do not have regular walking tracks like many other carnivores, nor are their hunting grounds well-defined. We were frustrated, tired, and heartbroken… but we persevered. Finally, after 16 months of hardship, we found our first pangolin on a camera trap. It was a joy unbound!

My field assistant whispered, “Bhau, it is still roaming in this area. We must find its track and living burrow for a direct sighting!” I couldn’t agree more. Three days of tireless searching later we finally found it. Even as I stared in disbelief, Datta moved closer to get a better look… and the animal, responding to ancient reflexes, promptly dropped to the ground, folded its arms over his head (males are discernibly larger and heavier) and curled inwards to form a tight, impenetrable ball! I was reminded of the etymology of its name – ‘pangolin’ derived from the Malayan phrase peng-guling, literally meaning ‘roller’, referring to its unusual defensive posture of rolling into a tight ball. I approached him quietly. Still curled up in a ball, timid and afraid, it hissed, warning me to stay away. I observed him from a few feet away as he cautiously unfolded himself. We thought our presence would stress him, but to our intense astonishment, he ambled towards me, sniffed me with his pointed nose, and climbed onto my legs to better sniff my face! He showed no fear of our presence. Pangolins have no sharp teeth or nails to defend themselves, nor are they fast runners. They are quite docile, and no doubt this trait makes them easy targets for poachers.

As I sat there with the curious pangolin in my lap, I couldn’t help but wonder how people could so heartlessly kill these wonderful animals, boiling them alive to get their scales – all for a completely misled hypothesis that the scales possess healing powers, with not an iota of scientific basis or evidence. 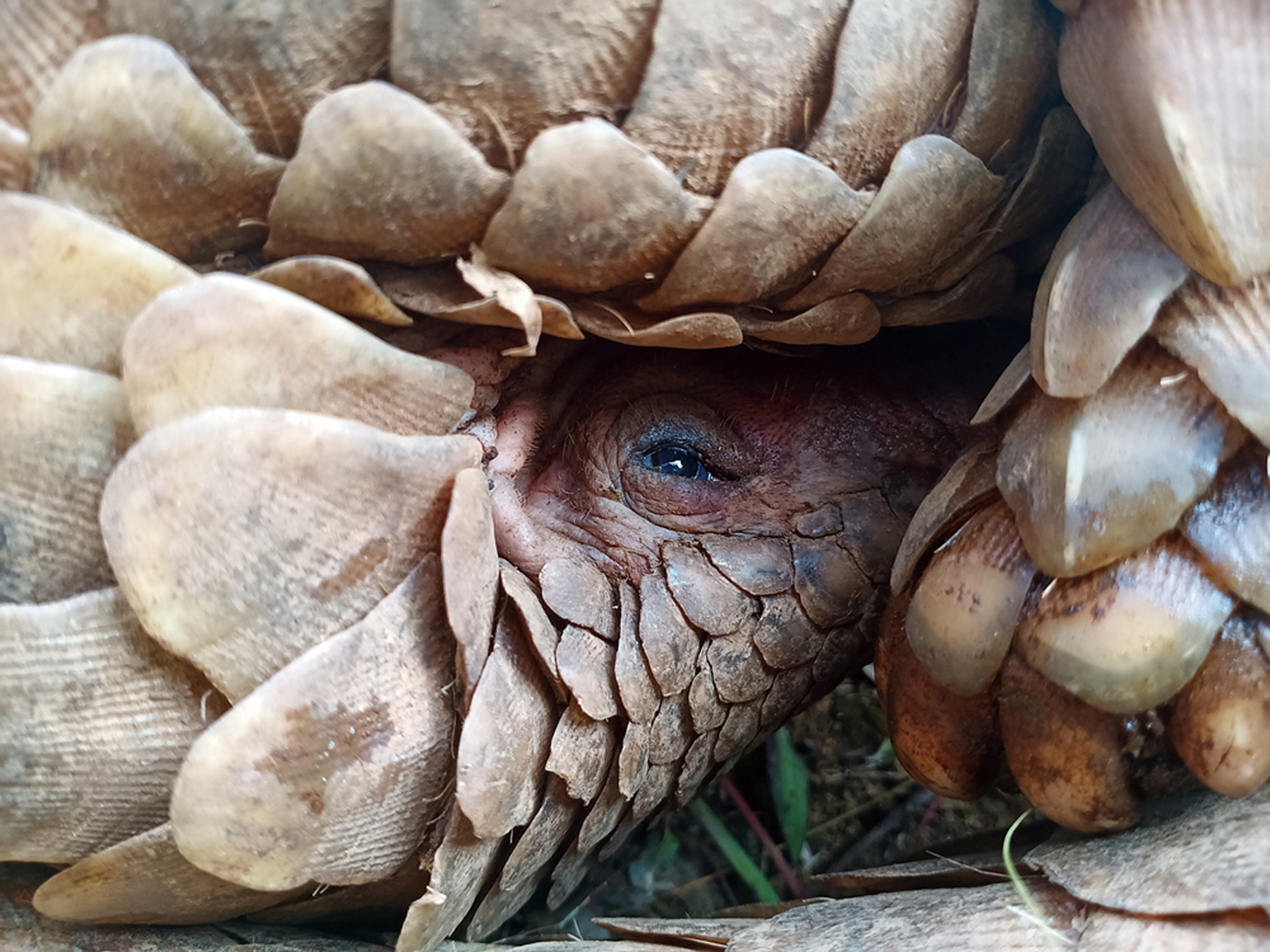 Lacking sharp claws or teeth, the pangolin’s only defense maneuver is to roll up tightly into an armour-plated ball, shielded by its scales. But this offers it no protection from poachers. Photo:Tushar Pawar.

Pangolins require no specific habitat like many other species. They can live in farm lands and degraded forest, only needing food, water and hideaways to shelter and protect them from poachers. They have remained safe enough to survive other natural predators for several million years.  Pangolins play a vital role in ecosystems. Friends of farmers, they may feed on over 20,000 ants and termites every single day, that translates to about 70 million ants and termites a year! By controlling insect populations, they maintain the health of soil that they aerate. Sadly, these invaluable ecological services are never mentioned in reports of pangolin seizures, which focus ill-advisedly on the perceived “value” of their scales. This I believe misleads readers, and even promotes copycat poaching as a lucrative source of income.

Our project, launched in 2019, was focused on generating baseline data about pangolins and to create awareness and support within the local community for their protection. Conservation cannot be done in isolation. We need the involvement of forest-dwelling communities. For this to happen, we must ensure that they become the primary beneficiaries of diversity and ecosystem conservation and regeneration. 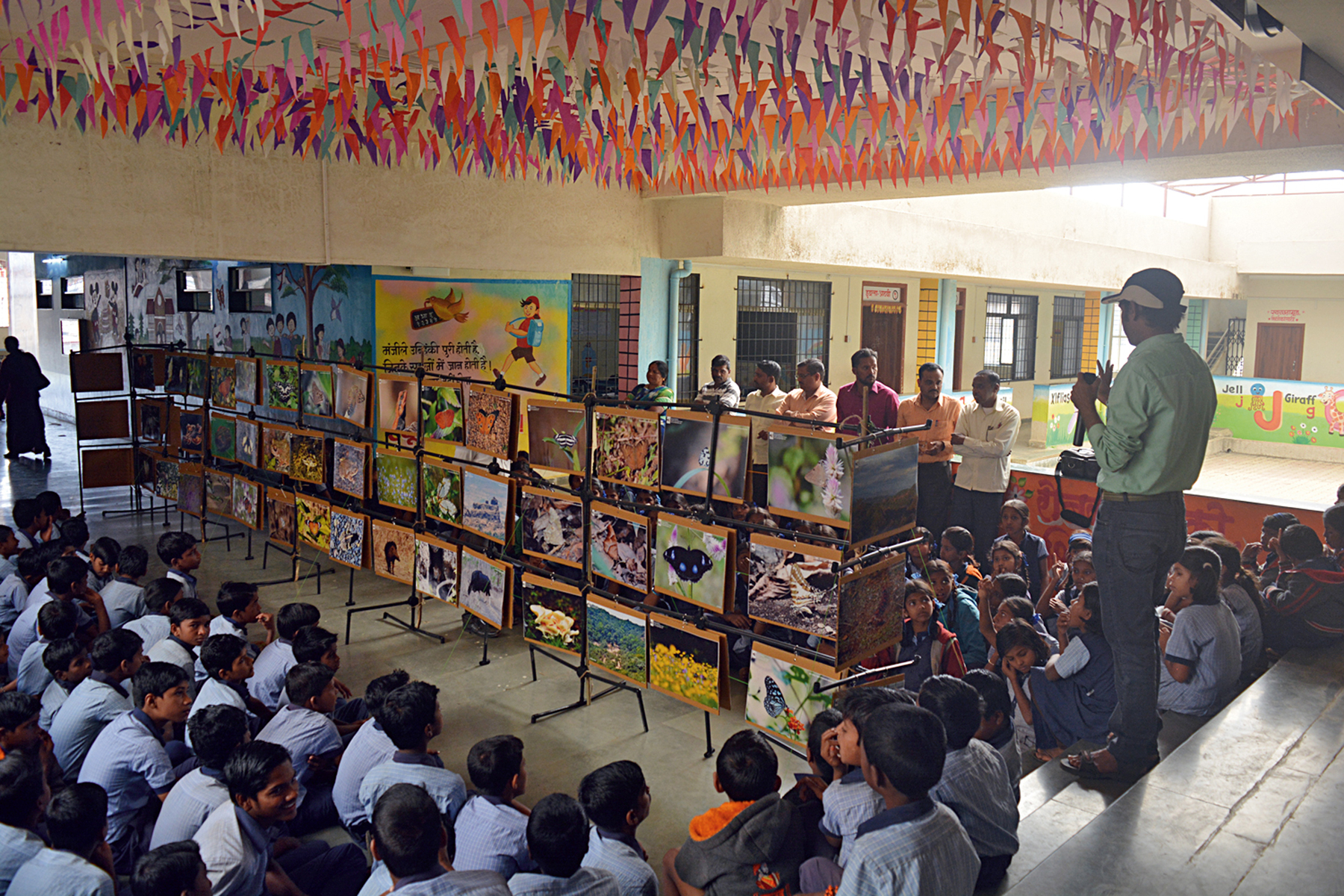 Apart from ecotourism initiatives, the author has initiated educational programmes to win community support for pangolins and other wildlife. Photo:Tushar Pawar.

There are eight settled villages inside the Bhimashankar Wildlife Sanctuary area and 110 villages within a 10 km. periphery. Villagers primarily depend on the forest and its produce for Non-Timber Forest Produce (NTFP) collection, fuelwood, and fodder for livestock. Additionally, some locals own large private or malki forest lands that are prime pangolin habitats. Here the Forest Department has weak jurisdiction, protection measures are inadequate and regular monitoring is absent. This has led to enhanced threats to the species because of new global demand from the illegal wildlife trade (see The Wildlife Crime Nexus) Practices such as shifting cultivation, hunting and poaching are additional threats to the survival of pangolins and their co-inhabitants.

Clearly conservation in India needs to be reimagined to implement community-based long-term conservation action plans. To reduce the dependency of the local people on extractive forest use, we are working in Bhimashankar on ecotourism plans to provide livelihood opportunities for local youth and value-additions in their malki forest.

Through our Nisarg-Aradhana Environmental Education programme, we take awareness to ashram schools, the main education facilities available in the region. Our programme has adapted to suit their syllabus and our resource materials augment their traditional wildlife knowledge. We focus on the importance of the forest, rivers and wild denizens through documentary film screenings, interactive presentations and open discussions with students. More than 1,200 students have actively participated across a total of 28 sessions in the year of 2019-2020.

Of course, we continue monitoring pangolins in the study area to generate ecological data for better habitat management. This also helps us gain information on illegal activities in real time, allowing preventive measures to be implemented by the authorities. Conservation is an ongoing process. It takes years for change to transpire on ground, and we intend to persevere for as long as it takes to secure the future of the Indian pangolin. 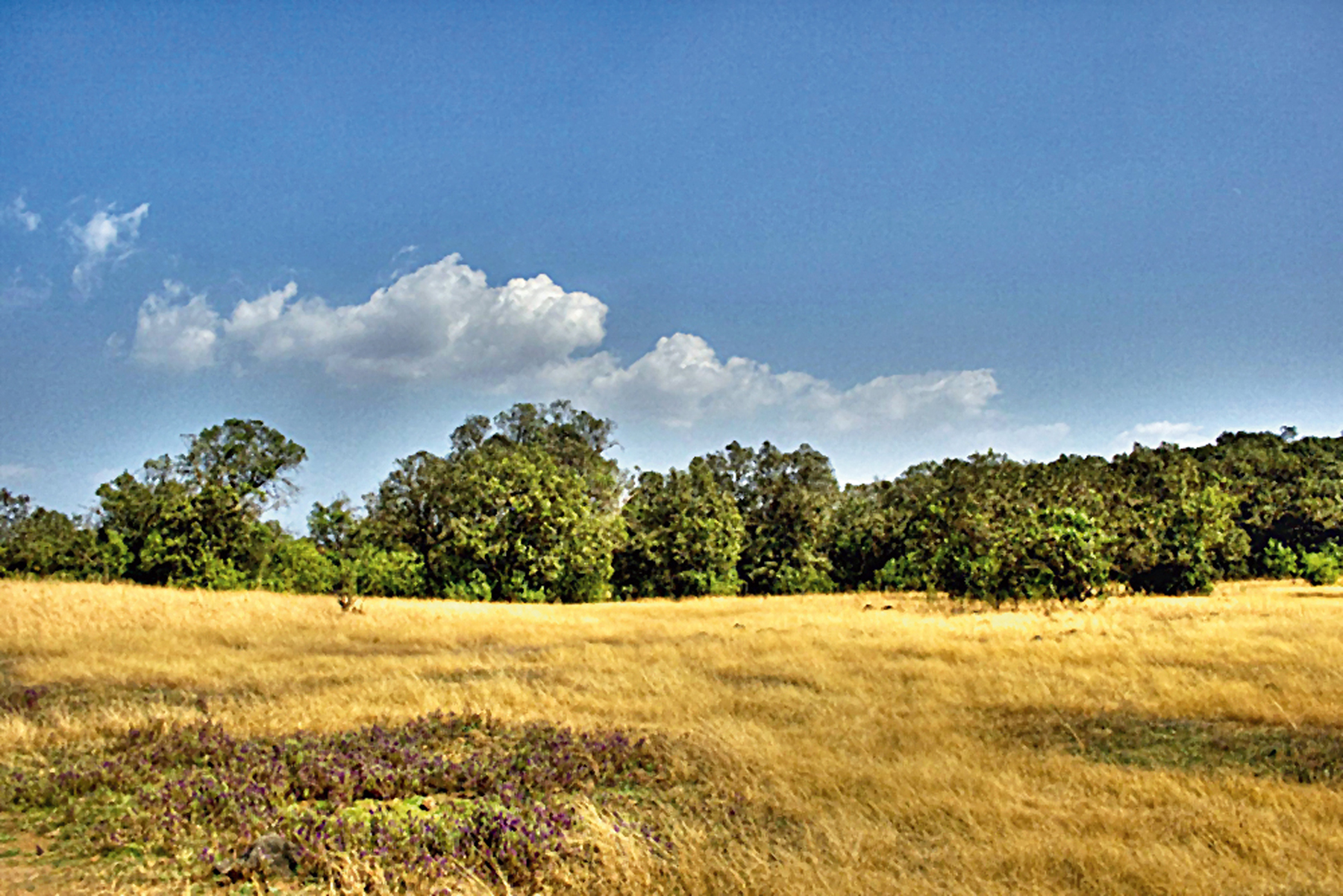 The Bhimashankar Wildlife Sanctuary was notified by the government of Maharashtra on September 16, 1985. Geographically it is situated in northern Western Ghats, spread over 130.78 sq. km. with an altitude ranging between 340 m. and 1,208 masl. The forest extends in Pune, Raigad and Thane districts, covering many villages within its boundaries. The sanctuary is one of the five wildlife sanctuaries in the northern Western Ghats. Unbroken high ridges of the Western Ghats pass from north to south through the sanctuary. The forests of Bhimashankar WLS are mainly classified as subtype 2A/C2 i.e. west coast mix semi evergreen forest, and cover all but one per cent of the sanctuary area. Based on existing physiognomy and floristic types, the vegetation cover of the sanctuary is divided into evergreen, semi-evergreen and dry-deciduous forest. Moist deciduous forest mainly lies on the Deccan plateau ridge, with tall evergreen forest found in the catchment of the Ghod, Bhima and Goneri rivers and their tributaries, while dry deciduous forest is found in the western slopes and eastern valleys. The gentle slopes between steep hill slopes and the stream basin support scrubs and herbaceous plants. The Devrai (sacred groves) of the temple is the only known virgin evergreen type forest seen in the Western Ghats.

The author’s field research with the Standing for Tigers Foundation was made possible by a Prakriti Research Fellowship and support from the Maharashtra Forest Department and Grind Master Machines Pvt. Ltd. His camera traps and GPS devices were donated by IDEA WILD.

A wildlife biologist who is committed to enhance community awareness, Tushar Pawar is a Principal Investigator of the Pangolin Conservation Project. In the past, he has also worked in the Melghat Tiger Reserve.