Our trip to Nagarahole was the result of my grandson sighting a tiger near Avalanche in the Nilgris, and his failure to photograph it properly on December 20, 2014.  Since then, he egged me on to plan a visit to Nagarahole, whose terrain I was familiar with, and which he and his colleague who accompanied me had not visited.

After passing through Hunsur, we touched the Nagarahole road, and were passing through the eastern boundary of Nagarahole Tiger Reserve. All of a sudden, a bunch of women carrying their babies emerged from their houses on our left to the middle of the road crying “puli, puli" (tiger in Tamil), pointing at the thick lantana bushes on our right. Added to their cry, was the frenzied galloping of an elderly, khaki-clad man in the middle of the road, pointing in the direction of the hedge. We slowed the car, and scanned the bushes intently to see if the dusky red and black stripes of the feline beauty were visible through the slender gaps in the bushes. We stopped the car and stayed put inside for some time to see whether the big cat would break cover. But there was no sign of it. It had capered away deep into the thickets. In confirmation of the women having sighted the feline, was the sudden emergence of six wild boar from the bushes on our right to the main road in a row. Though we were eager to see the feline beauty in its natural splendour, it eluded us. However, we took it as a good omen that we might sight another inside Nagarahole! 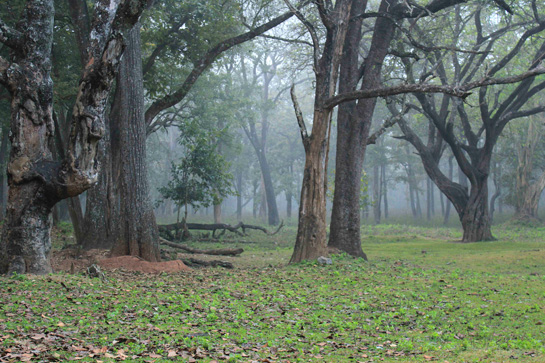 As we proceeded to Nagarahole, which was at a distance of 20 k.m. from this point, we were looking for fauna on either side of the road. At one point, we sighted a Crested Serpent Eagle on a tree bough. We reached Nagarahole before 3 p.m., and fortunately, lunch was ready for the four of us including the driver. We gulped the meal hurriedly and got ready for the safari at 3 p.m. The practice followed in Nagarahole is that only when sufficient number of persons is available (minimum eight) is the safari van plied inside the forest. However, if anybody is prepared to pay for the cost of eight persons, the vehicle plies. The cost per individual is Rs. 300/- (Rs 200 for entry and Rs.100 towards van fare). One entry fee is levied per day.

We boarded the jam packed van on time full of hope. It took a plunge into Chickapala area behind the reception centre, and jostled us along a well-laid road inside the forest. All along the route, small herds of spotted deer with their fawns were grazing on either side of the road and intermittently looking at us and posing for the camera. The stag, their leader, stood his ground and made a good picture postcard. As the van drove further, a few well-grown sambar, which were grazing along the fringes of the core area came closer to the van providing photo opportunities to the shutterbugs. As we neared a pool, a sambar stag trotted its way to it and started slaking its thirst. The scene was quite enlivening. A little away from here, we saw the kill of a tiger - a gaur. Its head and horns were intact, while its torso had been eaten away by lower-rung predators. At the sight of our vehicle, a couple of wild boar that were making a meal of the remains suddenly withdrew. The van then crossed the highway, and entered Guntoor and Doddahalla areas.  Except for the presence of spotted deer, there was no animal movement and, after one-and-half hours of journeying we returned to range office. 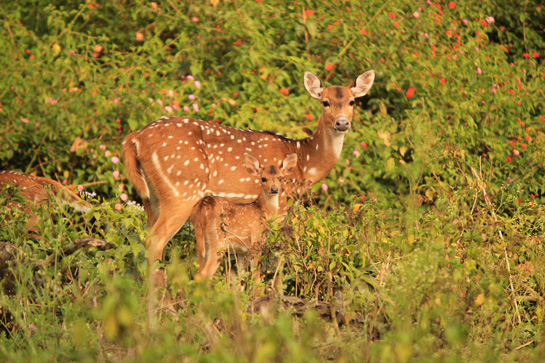 Sprawling across an area of 643.39 sq. km., Nagarahole is located at an altitude of 700-960 m. above MSL. It is bound by the Wayanad Wildlife Sanctuary in the southwest and by the Kabini river in the southeast, which is connected to Bandipur Tiger Reserve. It is bordered by the Devmachi, Mavukal and Anechowkur reserve forests in the north, while in the east and west are dry lands and private coffee plantations respectively. This landscape, varying from dry deciduous to moist deciduous interspersed with grassy swamps, carries a rich section of fauna and flora. In fact, Dr. Ullas Karanth chose this place for his path breaking studies on the tiger as the prey base for carnivores such as tigers, leopards and dholes was quite adequate. Over 330 species of avifauna have been recorded here, and out of these the notable ones are the Malabar Pied Hornbill, Malabar Trogon, Crested Serpent Eagle, Osprey, Grey Jungle Fowl, King Vulture and the critically endangered Long Billed and White Rumped Vultures. As the area receives abundant rainfall, we come across timber species such as rose wood Dalbergia latifolia, thadasu Grevia tilaefolia, ven teak Lagerstromia latifolia, pillamarudu Termanalia paniculata, Karimarudu Terminalia tomentosa and vengai Pterocarpus marsubium in the vicinity of the rest house itself. Deep inside the forest, we come across irumbakam Hopea parviflora, Bambusa arundinaceae, Poompathiri Sterospermum chelinoides and thani Terminalia bellarica. The reptilian list includes marsh crocodile, Indian terrapin, monitor lizard, chameleon, spectacled cobra, Russels viper, common krait, Indian rock python and a host of other snakes, lizard and turtle species.The park faces threats from ungulate poachers, man-made fires, and the illicit removal of forest produce, which bring about habitat degradation. Recently, it has been reported that sand mining is going on in the Saraswathy river near the reserve which is a great threat to the ecology of the park. Human-wildlife conflict has increased due to changes in demography and cropping patterns around the national park on the eastern fringes. On the 30th morning, there were no trips into the forest as there were no sufficient numbers of persons. Hence I approached Range Officer Lokesh Murthy to arrange for a special trip. He readily accepted our request and fixed it for the afternoon.  He suggested that we visit the Iruppu falls in the meanwhile, which was at a distance of 20 k.m. from Nagarahole on the way to Kutta. We had to trek a distance of two kilometres over a hilly region strewn with big boulders to reach the falls. The cascade was thin and was tumbling down from a height of 51.2 m. The waterfall is actually the waters of the Lakshmana theertha river which flows to the northeast and then joins the Rama theertha river flowing in the northwest direction. These finally join river Cauvery river. After clicking some images pictures of the falls, we returned to Nagarahole for the special trip. 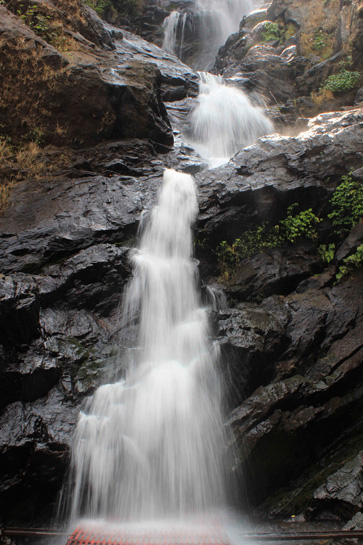 At 3.30 pm, we started exploring the tourist zone of the forest by gypsy. The highlight of this trip was sighting well-grown sambar looking like over-sized ponies. The first one we sighted was a black stag nibbling at the greenery of the hedge to our left. On the underside of its neck, the red or sometimes pinkish spot was visible. Three huge female sambar were trotting close by along the hedge together. Their characteristic sound at the sight of the gypsy seemed like an alarm call. After clicking some images, we reversed the vehicle, and we were keeping pace with their movement. They suddenly crossed the road and took their position on the path of the vehicle as if they were policemen stopping the vehicle! A rare pose indeed! But this moment could not be captured on our cameras for, within split seconds they jumped to the opposite side of the road. Another event of photographic value in this stretch was a small herd of grazing chital juxtaposed by a boar which was gnawing the forest floor for tubers against the backdrop of reflections of nearby trees on the waters of a pond.

Then we moved on to the tiger road and the vehicle stopped at the sight of a King (black) Vulture perching on the forest floor, far away from the road. In the foreground, a few spotted deer were grazing and a little away from them was a pond. In the intervening space between the King Vulture and the deer, a wild boar was moving slowly. This scene, particularly the presence of vulture and the alarm call of the deer and common langur from a nearby area on our right made the driver Durgesh stop the vehicle. The kill with the predator must be inside the thickly-forested area in front of the vulture. The vulture was in all probability waiting for the predator to leave its kill after some time. Either we should have prevailed upon Durgesh to go as far as that place or waited for some time. After waiting for 10 minutes, he headed to range office. My grandson and his colleague were much disappointed.

On the 31st morning, we did not go for the morning ride. We left Nagarahole at 8.30 a.m. so as to sight some avifauna on our way to Murgal and beyond to Coimbatore. Luckily for us some avifaunal surprises were there!  We first came across a Red Jungle Fowl. Its swift movement has always been intriguing to a wildlife photographer. But this time, I could successfully get it in my camera. On either side of the road the birds chirping aroused forest activity to its crescendo. They were mostly flitting about through branches and foliage. A small Green Beeeater perching on a projecting twig was well documented by my grandson. A little yonder from this place was a Red Wattled Lapwing moving slowly on the forest floor which made for good pictures. After this, when we thought it was time to drive off, when I suddenly noticed a tree completely denuded of its foliage but bearing red flowers all over, which were glistening in the sunlight. This tree was none other than the flame of the forest Butea monosperma.

Flocks of Chestnut Tailed Starlings were chirping around it and some poking their beaks into the inflorescence and flying back and forth to taste the nectar. We went close to the tree and shot pictures of the bird in pairs, which was indeed lovely. It was chestnut coloured on the thorax and bore a white head. Its lower mandible was blue and the upper one was somewhat orange. What a gift to mankind! In this group of chestnut coloured birds, there was the minuscule purple black bird with a long beak called the Purple Sunbird. 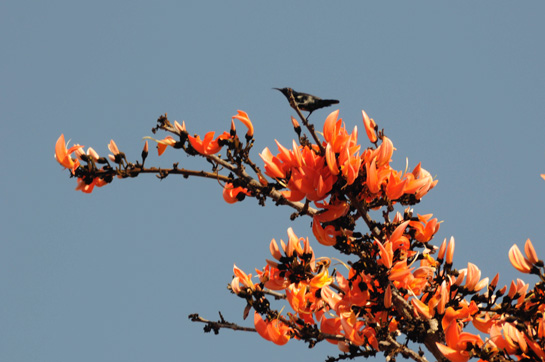 After satiating ourselves with bird watching on the road side, we drove off to Mysore enroute to Coimbatore. Later, we learnt that the poor movement of larger animals was due to the fact that they had moved on to Wayanad Sanctuary on account of a fire.