Sanctuary Asia, the magazine you hold in your hands, began its journey one quiet evening in 1980. Sitting around Fateh Singh Rathore’s campfire under the banyan tree outside Jogi Mahal, Ranthambhore, Bittu Sahgal made a rash promise to his mentor that on his return to Mumbai he would start a wildlife magazine and galvanise urban Indians in support of the country’s wilds. The first issue rolled out in October 1981, with no business plan, no editorial experience and no capital. 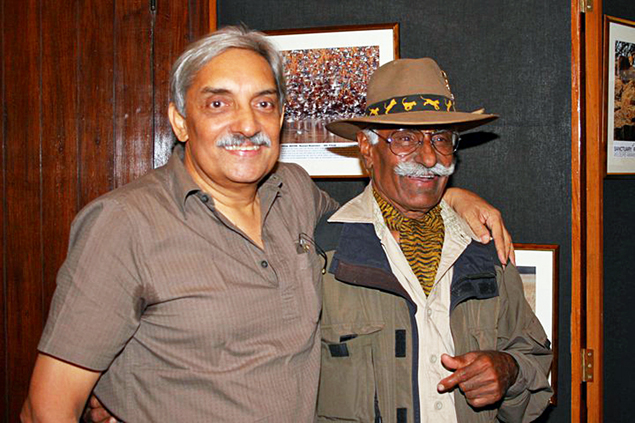 The magazine survived. Over thirty-five years it snowballed into a larger conservation movement of action, communication and advocacy, leading to the establishment of the Sanctuary Nature Foundation in 2015. 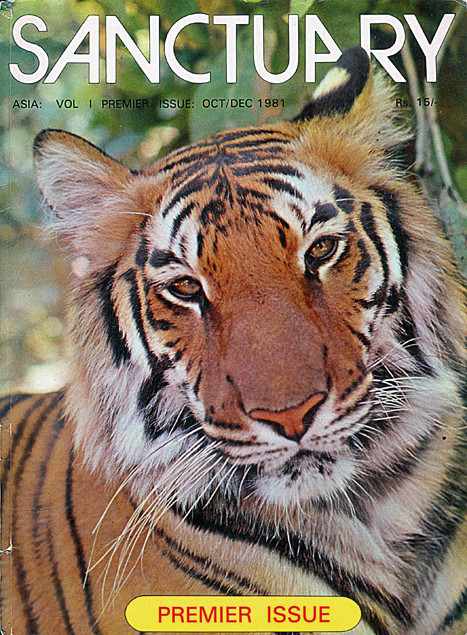 Today, propelled by the experience and momentum of almost four decades in conservation, that promise made around a campfire has been amplified by a sprawling network of nature enthusiasts who are part of the Sanctuary family. The Foundation works at the trijunction of biodiversity, economics and climate change with a clear vision to shape our planet into a safe home with abundant biodiversity, a sustainable climate and an equitable future for all. This is done through its myriad projects, and the flagship Sanctuary Asia magazine. 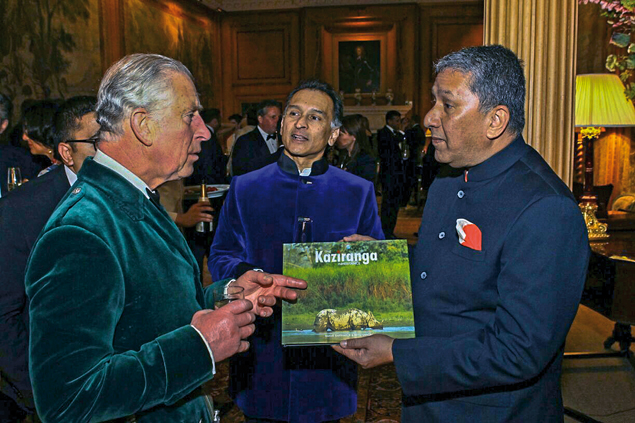 Prince Charles being gifted ‘The Kaziranga Inheritance’ by Ranjit Barthakur on April 29, 2016 in Dumfries House, Scotland.

Sanctuary has been chronicling India’s natural history and shaping conservation discourse these many years without having missed a single issue, despite wars, social strife and economic meltdowns. It is published every month, with every alternate month’s publication dedicated to young readers.  For many young, urban Indians, Sanctuary Cub was, and continues to be, their first introduction to the wild and wonderful world of nature.

Sanctuary also produces large-format coffee table books and guide books on the country’s best and often least-known wildlife havens. These books, including the “Wild” and “Inheritance” series, are put together by the Sanctuary editorial team with contributions from researchers, scientists, photographers and conservationists at the top of their respective fields. 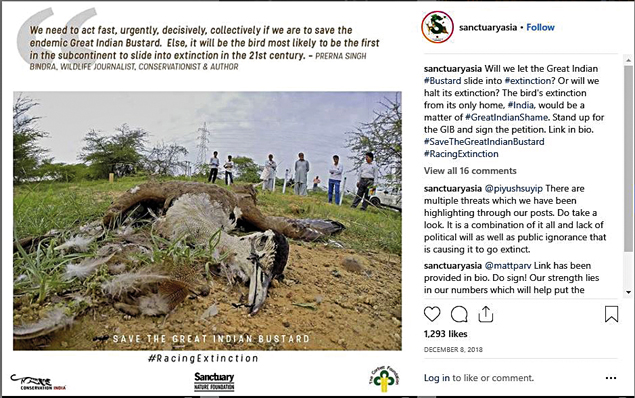 In the mid-1980s, Sanctuary understood that for true impact the message must reach beyond the-then small, but expanding, group of wildlife supporters who read English magazines. Doordarshan’s viewership of millions proved to be a gift, and the organisation produced as many as 30 wildlife documentaries in Hindi, titled ‘Project Tiger’ plus a mini-series narrative titled ‘Rakshak’ for families. In the early 1990s, Sanctuary’s scope expanded with Sanctuary Features syndicating content, at low costs, to regional language newspapers. The mainstream media soon began to put out alternate views on the environment and development issues, and writers on subjects as varied as travel, science, health, nutrition and politics enriched the communications. Sanctuary purposefully sowed conservation seeds far and wide, and continues to provide content on natural history science, community welfare, nature conservation, climate change and education for both, print and digital media. When the role of social media in catalysing social change began, Sanctuary recognised the opportunity and was quick to adapt. The Foundation’s vast reach on social media platforms is a key conservation ingredient for public opinion in India today. We do not back away from existential battles, but Sanctuary’s primary strategy is to unite disparate, credible, purposeful groups through conflict-resolution and bridge-building initiatives. Consequently, we work collaboratively with a diverse range of organisations, on several public campaigns.

But the real answer, we know, lies in changing the mindset of an entire generation. That is why, in 1999, Sanctuary began to tell the children of India stories of how saving the tiger saved entire ecosystems, and in return the forests now filter and feed over 600 rivers with pure water and stabilise our wobbly climate in the process. Kids for Tigers, an internationally-recognised environmental outreach programme took root, with a reach that currently extends to over one million children together with their parents and teachers. Inspired through workshops, nature walks, camps and tiger fests, a whole new generation of dedicated conservationists has emerged in the past two decades of this programme. Long before it became the rage, Sanctuary’s Kids for Tigers children found themselves invited to meet Governors, Prime Ministers and Environment Ministers, sports stars and celebrities, editors and journalists, where the young convinced the old that protecting nature was the best way to protect current and future generations. The Foundation continues to use the tiger as a metaphor for all nature, and Kids for Tigers forges ahead with its objective of making children fall in love with nature while recognising its innate value. 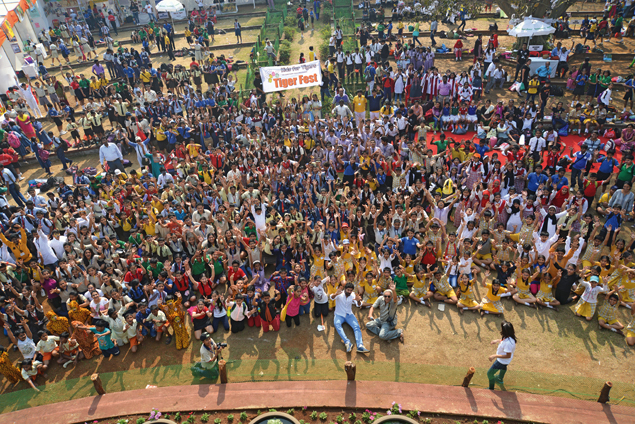 Inspired through workshops, nature walks, camps and tiger fests, a whole new generation of dedicated conservationists has emerged in the past two decades of the Kids for Tigers programme that currently extends to over one million children together with their parents and teachers.

Through each year, the Sanctuary team organises and hosts a calendar of events that culminate with the annual Sanctuary Wildlife Awards in December. The awards were instituted in 2000, to honour the men and women working at the frontlines of India’s battle to protect its wildlife and is widely recognised as the most prestigious felicitation of its kind. The Sanctuary Wildlife Photography Awards, which invites thousands of entries each year, was cleaved out from the wildlife awards in 2017, and is dedicated to the wonderful art of nature and conservation photography. Alongside these two key events, the Sanctuary team hosts monthly nature walks, workshops, debates and talks on wildlife science and conservation in Mumbai and other major cities in the country.

Sanctuary Nature Foundation’s Kids for Tigers programme, has been working with thousands of kids and enabling them to experience nature. Field visits such as these help foster greater understanding and appreciation for our wilds.

The Mud on Boots Project

In 2017, Sanctuary went beyond honouring India’s grassroots earth heroes in the form of tangible assistance through the Mud on Boots Project. This is a booster programme designed to empower and support ‘mud-on-the-boots’ conservationists in India over a two-year period. The project focuses on those individuals whose conservation leadership potential is overlooked by large organisations and government agencies because of limitations such as the lack of academic qualifications, access to technology or language barriers. Through this project Sanctuary is enabling a network of committed on-ground conservationists, each of whom is contributing steadfastly to biodiversity conservation and community engagement in distinct ways. In addition to monetary support, Sanctuary works to raise the profiles of these Project Leaders, connect them to pertinent organisations or experts, formulate campaigns and forward their causes.

Also launched in 2017, Sanctuary’s Community Owned Community Operated (COCOON) Conservancies are based on the belief that communities living closest to our most biodiverse wonderlands deserve to be the primary beneficiaries and custodians of our vanishing biodiversity. Recognising that poor land and water management practices have resulted in a slew of failed and marginal farmlands, and shrinking forests, the Sanctuary Nature Foundation has pioneered the rewilding of aggregated farmlands through farmer-owned cooperatives that will continue to own the land and eventually profit from ethical tourism ventures. The COCOON Conservancy concept has been designed as a social upliftment programme that guarantees farmers a better life and livelihoods, whose collateral benefit is enhanced biodiversity, reduced human-wildlife conflict and improved health and education. A replicable pilot project is currently underway on the fringe of the Umred Pauni-Karhandla Wildlife Sanctuary in the Nagpur district of Maharashtra (see box on COCOON). 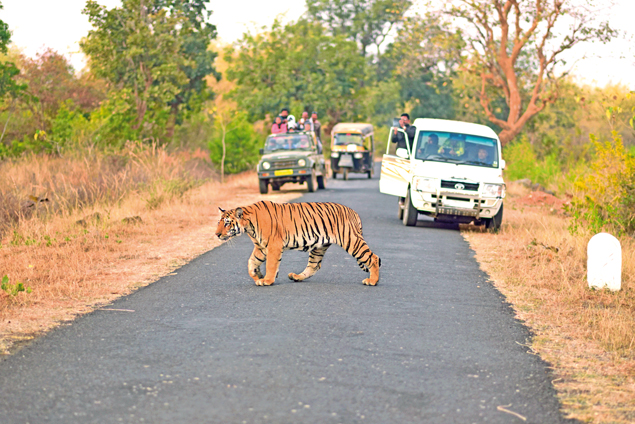 Wildlife Photography has seen a huge surge in popularity in recent times in India. The Sanctuary Wildlife Photography Awards, invites thousands of entries each year, and is dedicated to encourage an appreciation for nature and wildlife conservation.

Today, the Sanctuary Nature Foundation is a ‘Grand Central Station’ for wildlife in India. Networking conservationists, naturalists, photographers, writers and editors, we are an acknowledged fighting force for natural India. Our reach spans policy, advocacy, science, on-ground support for field workers, rewilding of failed and marginal farms and more. Born of a sense of wonder for India’s natural heritage, and the drive to affect positive change, the Foundation intends to build on Sanctuary’s four-decade-long track record to promote, support and consolidate the wildlife and nature conservation movement in India.

Join Sanctuary as we all look forward to the adventures that lie ahead.

Acutely aware that solutions to alleviate farmer stress and improve the relationship between people and parks was floundering, Sanctuary decided to demonstrate that it was possible to rewild abandoned and failed farms located right next to sanctuaries and national parks. The pilot project at Gothangaon village, next to the tiger forests of the Umred Pauni-Karhandla Wildlife Sanctuary has turned out to be a success. Here 37 families have stopped farming and allowed the forest to regenerate on their own land holdings. For four years, Sanctuary found the resources to compensate the farmers to the full extent they would have earned had they farmed. Soon nature did what nature does best… repair itself. Palatable grasses and bushes, and then trees began to colonise their land. Birds, herbivores and carnivores followed suit. Sunil Mehta of Bamboo Forest Safari Lodge (BFSL) and I sat together and worked out a way in which he would gift them homestays with titles in their names, which they in turn would entrust to the management care of BFSL for 30 years.

Everyone came out winning. The tigers got the space they needed. Locals whose farms were in a dire state got compensated for not farming and as health returned to their holdings their land values rose. In the process carbon was sequestered from the atmosphere and to a great extent, the seeds of human-animal conflict resolution were sown. From a Yamdoot (Grim Reaper), the tiger turned into their Annadata (Horn of Cornucopia).

The Sanctuary Nature Foundation is now looking to scale this model and take it to diverse ecosystems, quite the same way as Project Tiger did in 1973, but with people being the primary beneficiaries of rewilding.

A huge collateral benefit of the COCOON Conservancy initiative is the enhanced security of cores, buffers and corridors of biodiverse landscapes. Other benefits, such as clean air, improved water regimes, climate control and enhanced farm productivity of surrounding farm holdings have not even begun to be calculated.

All this at no cost to the exchequer.

In the words of Sunil Mehta, conservationist and one of India’s most successful wildlife lodge owners: “Sanctuary’s COCOON Conservancy concept is set to disrupt the existing wildlife tourism model in India by turning it from one that keeps people out into one that sees people welcome wildlife as a source of income and pride. What is more, the visitor experience is going to be dramatically improved.”