Save Kaliveli - A Tale Of Two Harbours

Estuarine mudflats are perfect examples of chaos in nature. Abstract meandering creeks swirl and wreathe around sediment islands. Blue hues collude with ochre tones where the nutrient-rich soils meet the ebbing creek. Fiddler crabs scuttle in and out of sight to evade detection and potential desiccation under blistering heat, while Caspian Terns and Brown-headed Gulls take to the skies to periodically swoop into the glistening waters to score their next catch. Driving along the coastline over the Edaiyanthittu estuary in north-eastern Tamil Nadu, after a gruelling session of birding at Kaliveli lake, I stared in awe at the sheer expanse of this intricately designed wetland system and its numerous segments, an incredible biologically productive ecosystem. 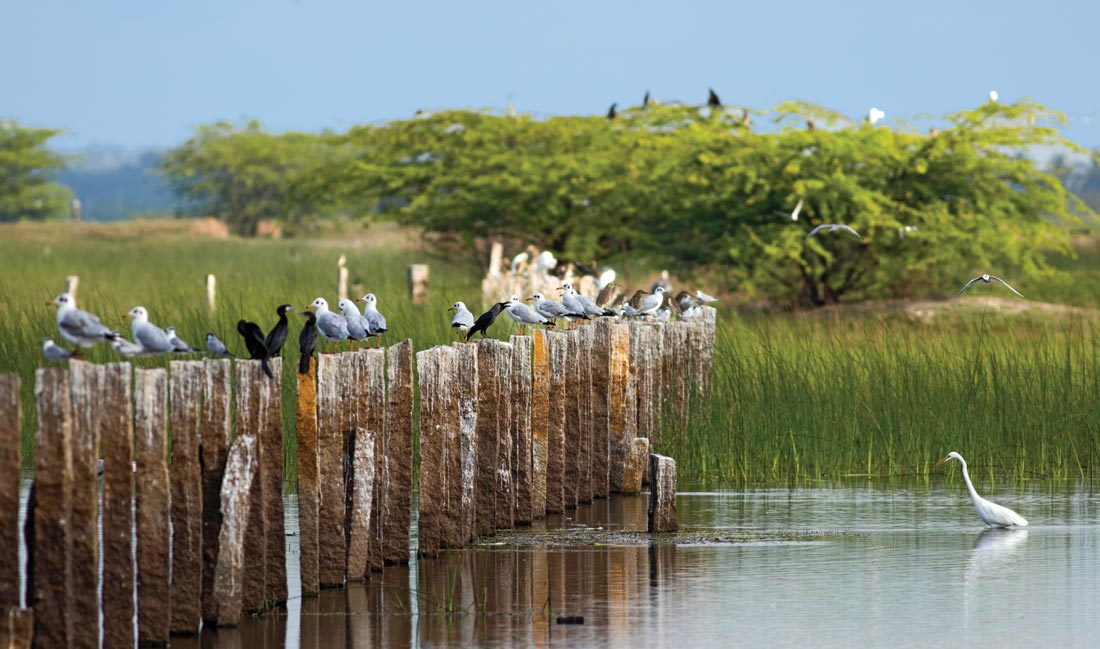 The Kaliveli wetland ecosystem is an important stopover point along the Central Asian migratory pathway, hosting many rare and threatened species in winters including over 160 species of waders. Photo: Umesh Mani.

And then, I spotted them. Two patchy, cluttered sandy lines perfectly bisecting the estuary. Huge mechanical cranes tossing up dust, construction machinery scattered haphazardly, large pipes organised into piles. It was a sorry sight, a scar on this otherwise untouched carpet of blue and gold. The foundations of an impending ecological disaster.

The Tamil Nadu Fisheries Department, without the required permits, has begun construction on twin commercial harbours for mechanised fishing near the villages of Alamparai Kuppam and Azhagan Kuppam that surround the estuary on either side. There are also plans to dredge the sandbar that protects the estuary from high wave action, and to replace it with training walls and groynes to allow boats to enter the channel and dock at the harbours. The goal of the project is to provide ease of access to the ocean, to these large fishing villages, for commercial purposes. However, its glaring ecological consequences cannot be understated. 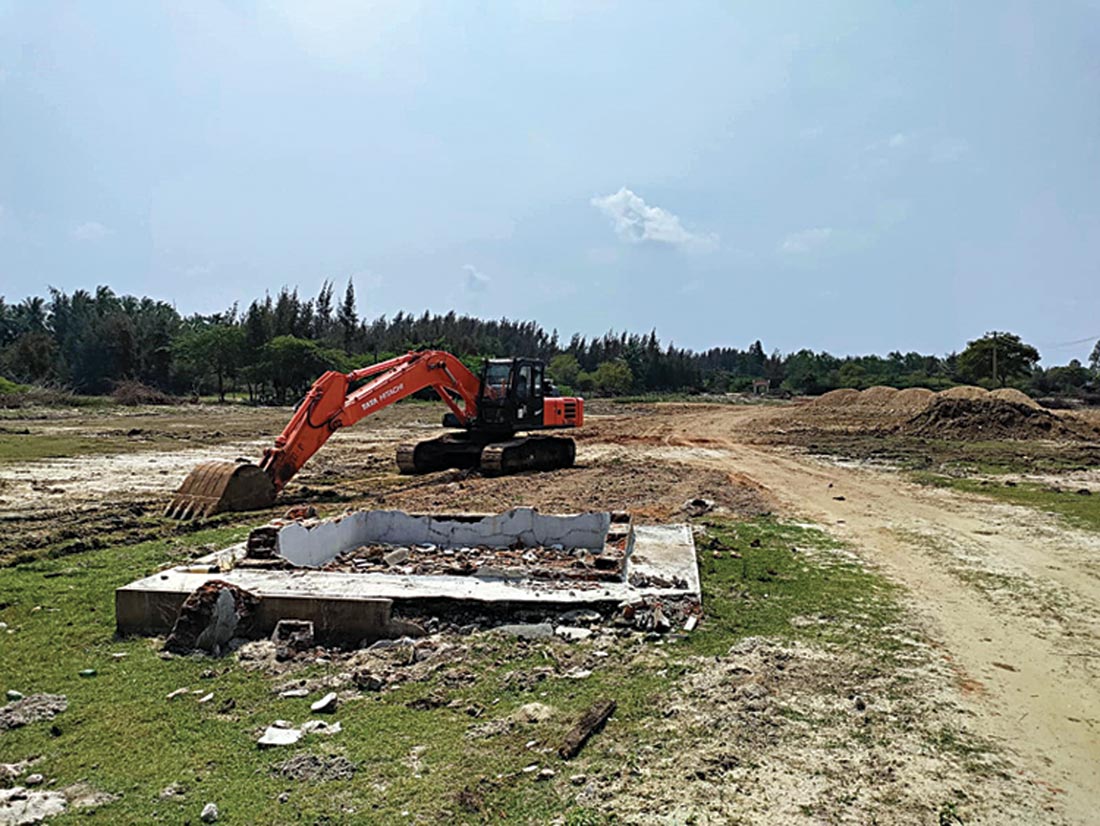 Construction for two commercial harbours for mechanised fishing has begun on either side of the Kaliveli estuary near two villages, without getting required permits. This will have grave ecological consequences, such as disturbing olive Ridley nesting sites and affecting birdlife, and also disrupting the livelihoods of the local communities who forage its mudflats for crabs and oysters and practice indigenous fishing. Photo: Krishna Chaitanya.

The beaches and coastline associated with the area are already notified nesting sites of the vulnerable olive Ridley turtles. According to the Forest Department’s data, there are 59 active nesting sites at Alamparai Kuppam, the site of the second harbour, and 53 at Azhagan Kuppam and surrounding villages. All these nesting sites are under immense pressure due to the construction of the harbour.

The project also requires dredging and dumping rubble on existing mudflats for construction, which would disrupt a large part of the ecosystem. Mudflats thrive when wave action is low and nutrients are thus easily absorbed and cycled rather than washed away downstream. They provide niches for countless organisms such as girdled horn snails and lug worms. Attracted by this buffet of invertebrates, over 160 species of waders and waterfowl call this estuary home, making it an important wintering site for several weary, globally-threatened avian travellers. Dredging the sandbar and adding training walls will obliterate this region’s only line of defence against strong ocean currents, and this could drastically reduce its productivity. Ditto for seagrass ecosystems, which act as nurseries for marine fauna. 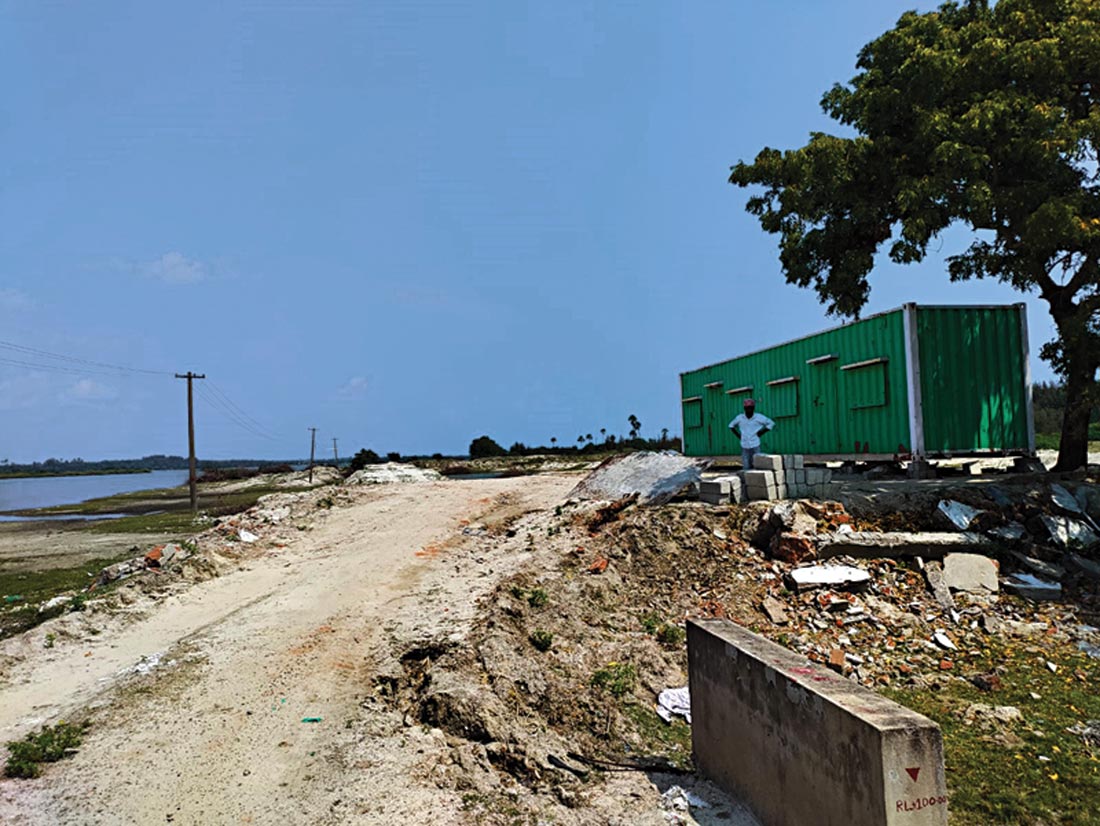 Construction for two commercial harbours for mechanised fishing has begun on either side of the Kaliveli estuary near two villages, without getting required permits. This will have grave ecological consequences, such as disturbing olive Ridley nesting sites and affecting birdlife, and also disrupting the livelihoods of the local communities who forage its mudflats for crabs and oysters and practice indigenous fishing. Photo: Krishna Chaitanya.

Aside from the damning ecological consequences, the project also leaves a large proportion of indigenous fisherfolk in peril. Further inland are over 60 villages of people primarily from marginalised backgrounds, who desperately rely on the mudflats for traditional oyster and crab farming. Dredging the mudflats will hurt their livelihoods, yet their voices remain unheard, drowned out by the few fishing villages close to the harbours who might benefit from the project. 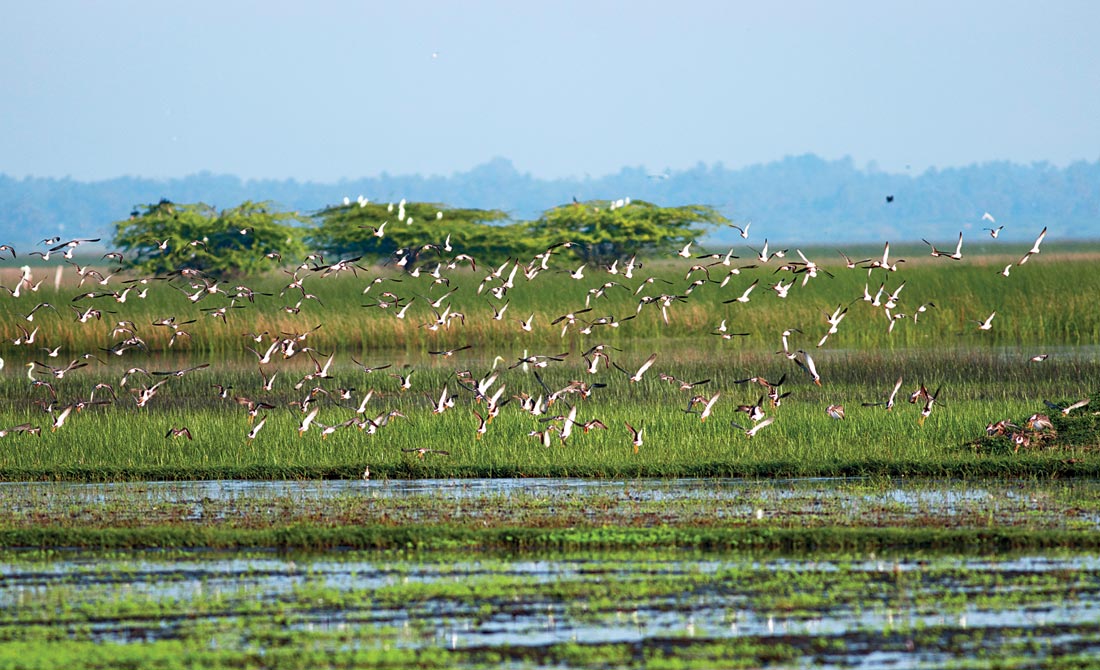 Kaliveli is a coastal lake and lagoon located in north-eastern Tamil Nadu. Spread across 5,151 ha., this rich wetland region was recently declared a bird sanctuary, as it hosts a large diversity of avian species. Photo: Umesh Mani.

I visited the main body of the Kaliveli lake, which was recently granted bird sanctuary status. At this time of year, vast beds of grasses covered the lake, with a few perennial pools serving as important oases for Greater Spotted Eagles, skulking Painted Snipes and agile Oriental Pratincoles. It was such an incredible landscape, and I winced at the thought of effluents released from the harbours, and the potentially life-threatening effects on migratory birds that come here for the winter.

WHAT YOU CAN DO
1. Make your voice heard! Send formal emails to the Chief Minister (cmo@tn.gov.in), the Tamil Nadu Fisheries Department (fisheriestn@gmail.com), and Supriya Sahu, the Additional Chief Secretary of Environment, Climate Change and Forests (forsec@tn.gov.in) requesting relocation or termination of the project.
2. Visit the area for yourself. A large part of why this issue is being overlooked is that it’s a rather unexplored region. Go on field trips, either with schools or in your own groups, visit the area and observe its biodiversity.
3. Add your own data. There is a dearth of knowledge about the estuary and its inhabitants, so any increase in our knowledge about the region’s biodiversity, either through citizen science or scientific studies, would significantly help increase the area’s conservation value.
4. Spread the message on social media! Support the #SaveKaliveli campaign and help increase public awareness.

Across our verdant country, what passes for development forges rapidly ahead, leaving a trail of ecological destruction in its wake. Areas of high biogeographic importance such as the Kaliveli water system need protection, for which the harbours must be relocated or abandoned. These are not just simple words thrown about in the name of activism, but demands for a habitat that has no voice of its own. So, for the sake of that glistening carpet of blue and gold, as well as the copious amounts of life that it harbours, speak out and #SaveKaliveli.

Ekadh Ranganathan is a third-year undergraduate studying Biological Sciences at the Hong Kong University of Science and Technology. He has a keen interest in ecology, and is an aspiring wildlife biologist. If he’s not out birding at odd times of the day or recording outdated observations on INaturalist, he’s probably playing table tennis or another racquet sport.