The Arunachal Expedition - Updates From A Reptile Haven

Text and Photographs by Zeeshan A. Mirza

Only the true heir of Slytherin could open the Chamber of Secrets and unleash the Basilisk. This was also true in the case of a research team that visited Arunachal Pradesh in 2019. As part of the team, before setting off on the trip, I checked all available literature on the state’s reptiles, including images in print, on websites and social media platforms. Most of what I found were of species that were well documented or known to occur in the region, except for one: a juvenile green pit viper with yellowish-green eyes and a distinct orange stripe along its snout, extending up to its tail. This image of such a strikingly different snake from the Pakke Tiger Reserve intrigued my interest... and I hoped to find it. 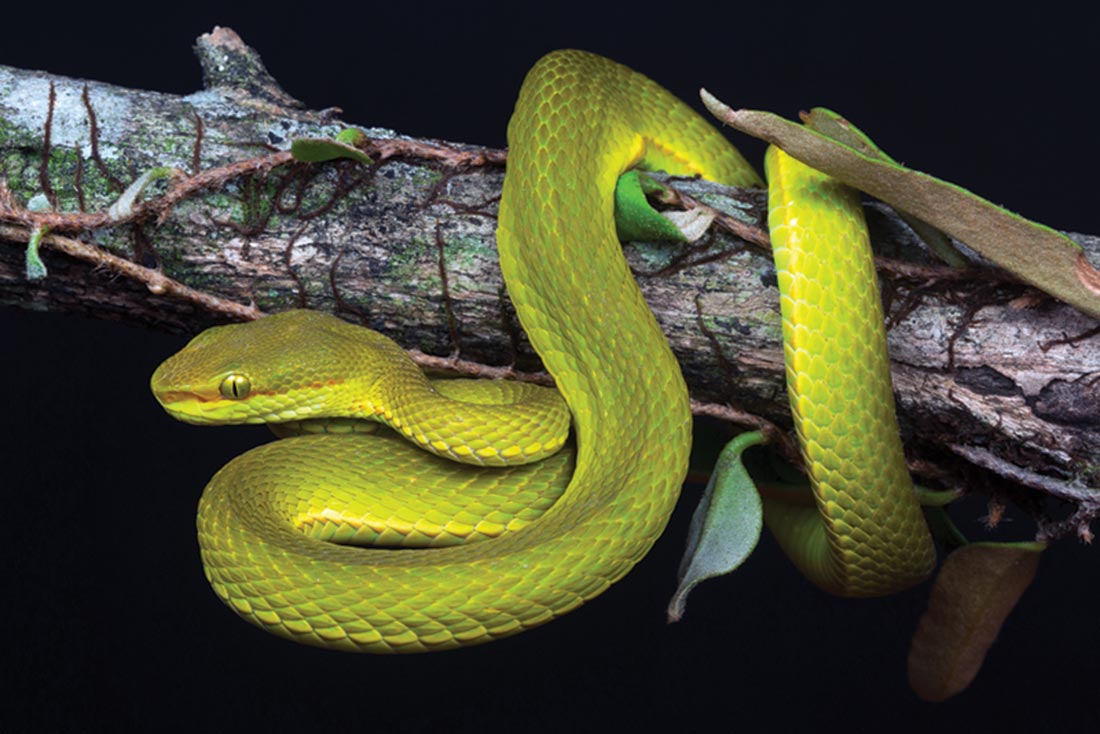 Interested in reptiles, amphibians and arachnids since my school days, the itch to explore kept me travelling across the country to document species. Arunachal Pradesh was a constant on my wish-list. The mighty Himalaya traverses through the state, merging with hill ranges in this Indo-Burma biodiversity hotspot. The largely undulating habitat covered with dense evergreen forest supports unique biodiversity unlike any place, particularly reptile and amphibian species. Plans to visit Arunachal Pradesh did not materialise until 2019 when Harshal Bhosale, a researcher with the Bombay Natural History Society (BNHS) expressed interest in visiting to study herps. Post necessary permission from the Forest Department, a team including Harshal and Mandar Sawant from the BNHS, Gaurang Gowande from Ferguson College, Pune, Pushkar Phansalkar from the Wildlife Institute of India and I came together and we travelled to the Pakke Tiger Reserve on June 28, 2019, to begin our survey. 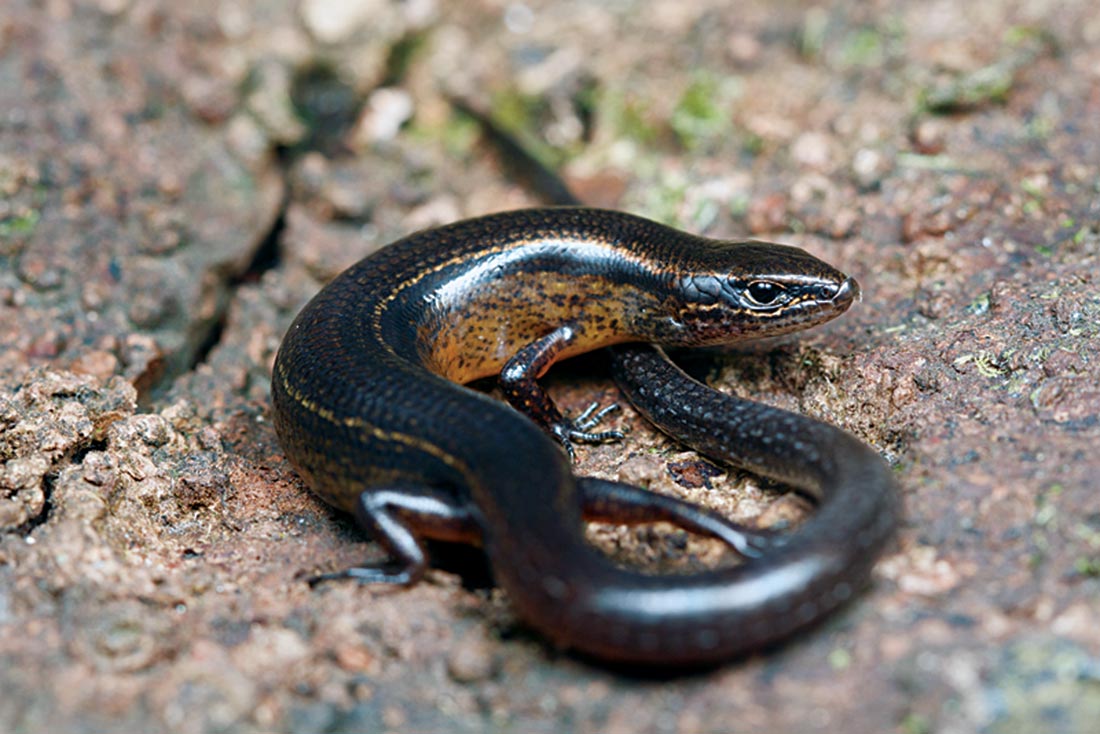 During rapid biodiversity surveys, it is ideal to seek actively moving, nocturnal reptiles at night along forest trails, or driving slowly along tar roads and stopping when required. Our first night there, we set out on a trail that led us into the forest, eagerly checking low bushes and the path of reptiles. The forest was alive with an overwhelming diversity of insects and spiders. Pushkar alerted me to an interesting looking net-casting spider with a pair of enormous eyes. We carefully checked tree trunks for geckos and abandoned houses for snakes. The first snake on the list was an eastern cat snake Boiga gokool that Harshal spotted on a fence, a species found in lower elevations across most parts of Northeast India that we had not seen before. Over the next week, the list kept growing: Assam snail-eating snake, blue fan-throated lizard, a species of bent-toed gecko that we later described as a new species Cyrtodactylus arunachalensis and the Zaw’s wolf snake. However, pit vipers eluded us! 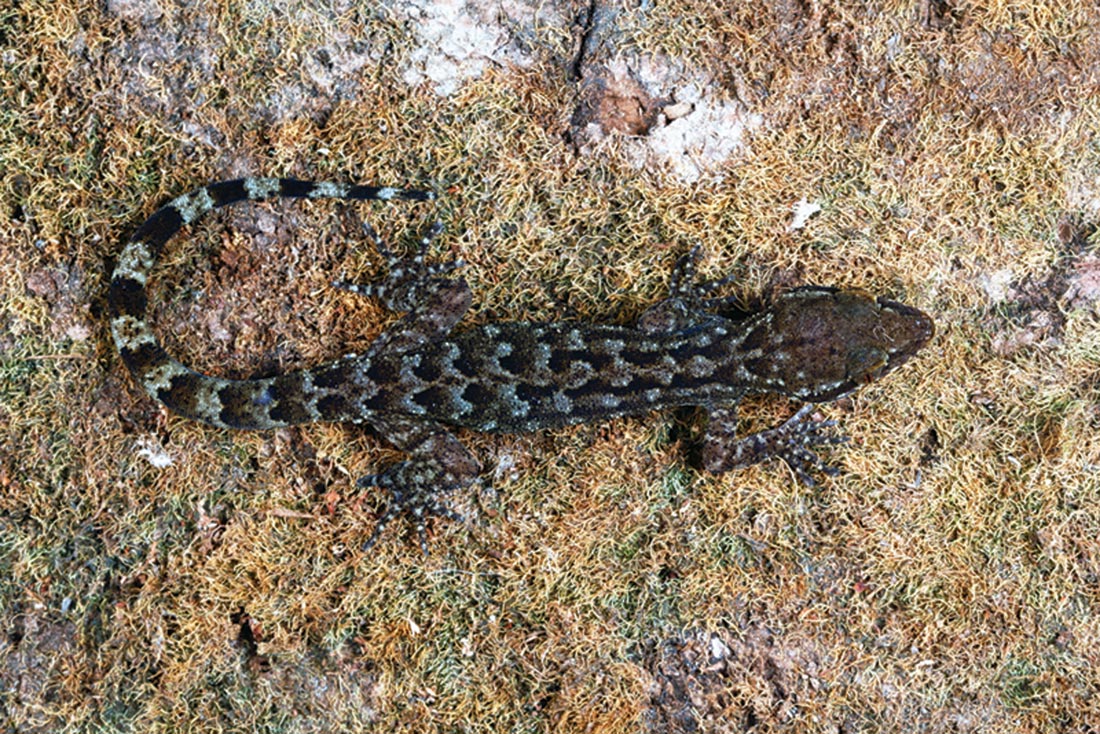 Cyrtodactylus arunachalensis, a common species in most parts of central and eastern Arunachal Pradesh.

After checking most places that were logistically approachable on foot, we focused our search on an abandoned house on the reserve’s periphery. Harshal, Mandar and Pushkar approached the house, while I walked along a nearby road to check for snakes in adjoining vegetation and maximise our efforts. The chatter of the trio checking the house faded out and was taken over by insect chirps and frog calls. Little did we know then that the snake that we were searching for was metres away from our vehicle coiled up in the bushes, awaiting discovery! As I kept walking, the cacophony of the frogs was interrupted by a car. I spotted a green snake on the road a little further away, lit by the car’s headlights. I ran in the direction of the car, waving frantically at the driver to stop the car from running over the snake. Fortunately, he stopped. To my delight, though not the pit viper we were seeking, it was a green cat snake that I had not seen earlier. Even as I greeted the trio with my sighting, Harshal shared that he’d spotted a pit viper near our vehicle! The following day, we found another individual of the same species. 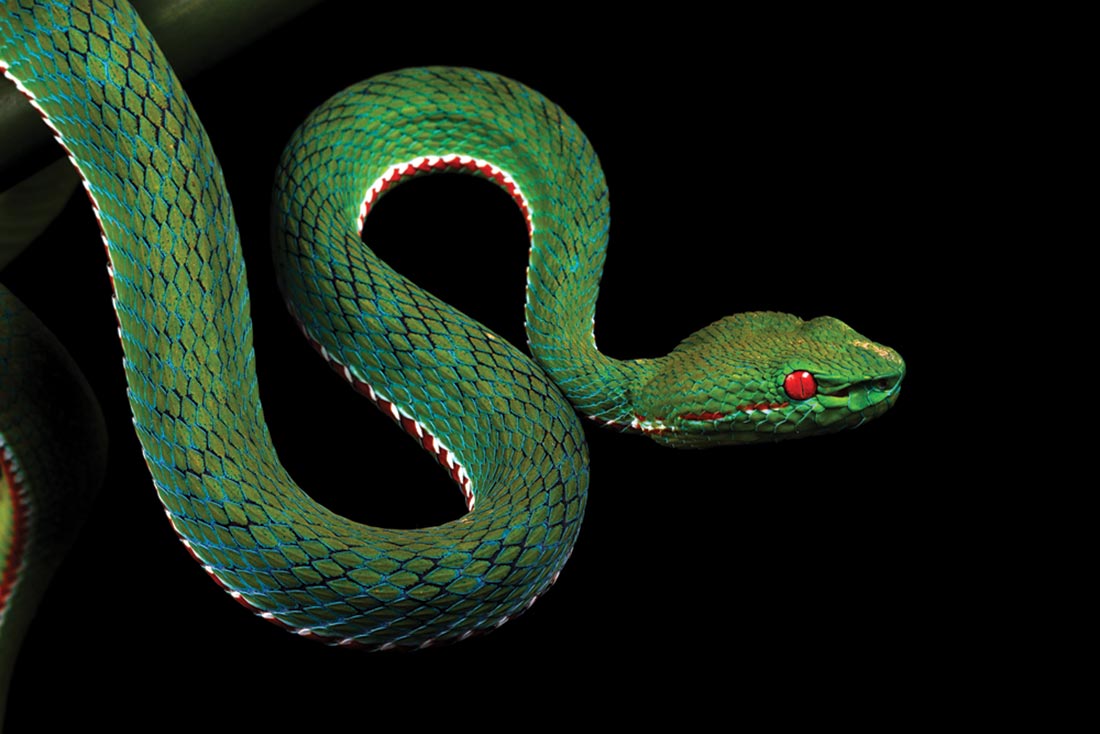 Treasures of Talle and Kamlang

Following our days in Pakke, we headed out to the Eaglenest Wildlife Sanctuary. The heavy monsoons made travel and survey difficult. We eventually made the difficult decision to move on to Talle Valley Wildlife Sanctuary, where we hoped to find a species of burrowing snake of the genus Trachischium that Harshal had seen on an earlier visit. Burrowing snakes are elusive. With the help of tribe members, we spent several hours each day upturning logs and rocks and looking out on trails to find active snakes. This exercise turned out to be fruitful as we came across several individuals of the large-eyed false cobra, two species of false-wolf snakes, a mountain pit viper, two species each of tarantulas and scorpions, and several burrowing snakes. Also, what seemed to be the Sikkim ground skink, on closer examination, looked different and required further investigation. We also rediscovered the tarantula Chilobrachys fumosus, a species described from Abor hills in 1895 by a British naturalist. 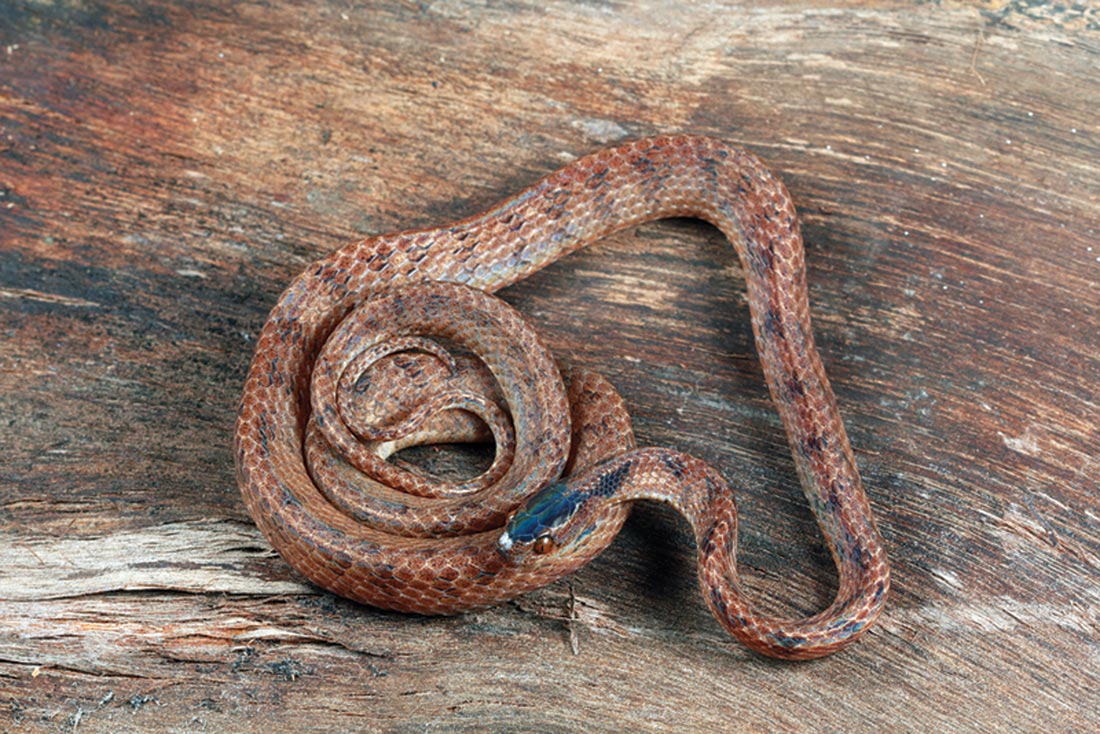 Our last destination was the Kamlang Wildlife Sanctuary to the far east of the state. The trails in this largely inaccessible area were watered by fast-flowing streams, enabling us to only survey the periphery of the sanctuary. Yet we found more than what we had expected, my favourite being a species of snail-eating snake that differed from the Assam snail-eating snake. Many of these species required further investigation and so, satisfied with our findings, we wrapped up our field work in the first week of August to return home. 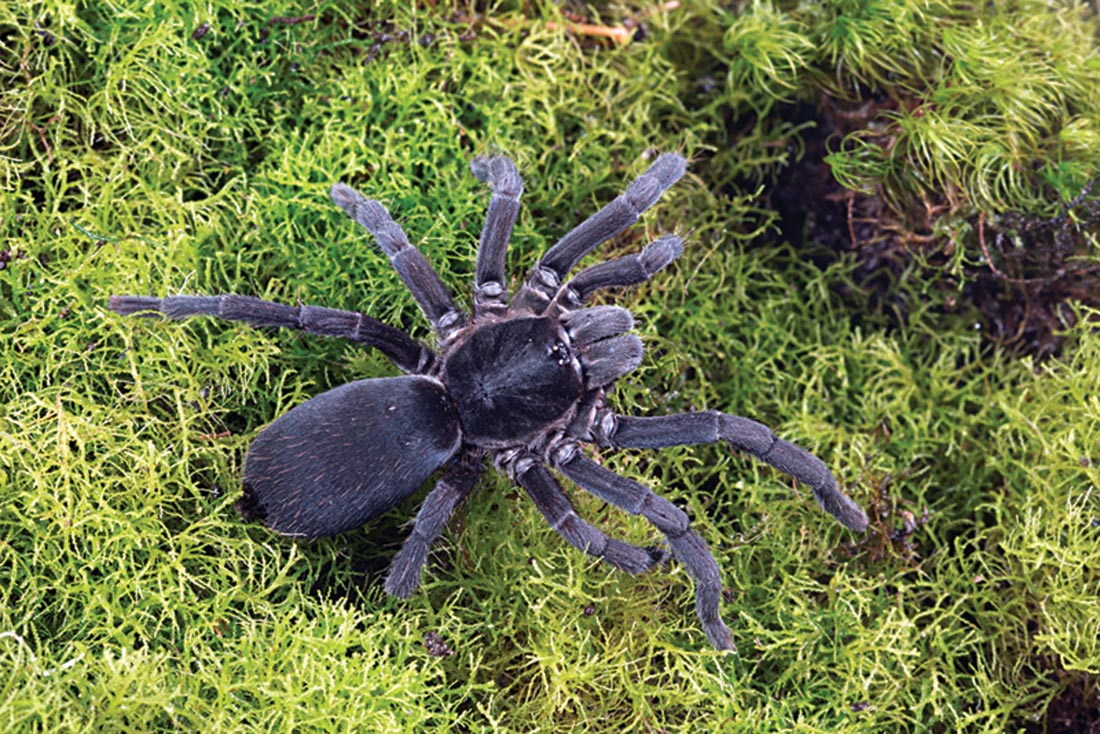 Chilobrachys fumosus, a species of tarantula described from Abor hills in 1895.

Field work was only the beginning. Much of our time would inevitably be spent in the lab – comparing specimens across natural history museums, DNA extraction and conducting CT head scans to look beyond scales. Our work resulted in several new discoveries. Notable among them was the green pit viper from the Pakke Tiger Reserve that we promptly named Trimeresurus salazar, after the fictional character Salazar Slytherin from J.K. Rowling’s Harry Potter books! The burrowing snake from the Talle Valley Wildlife Sanctuary was classified as Trachischium apteii, after Dr. Deepak Apte, the former director of the Bombay Natural History Society. The skink from the Talle Valley Wildlife Sanctuary we discovered was an entirely unknown genus that we named Protoblepharus apatani, in honour of the Apatani tribe of Ziro valley, for their warm hospitality and support. Our team felt like the true heir of Slytherin, that unleashed not only the Salazar pit viper, but several fantastic species that had not been identified and named before from Arunachal Pradesh. 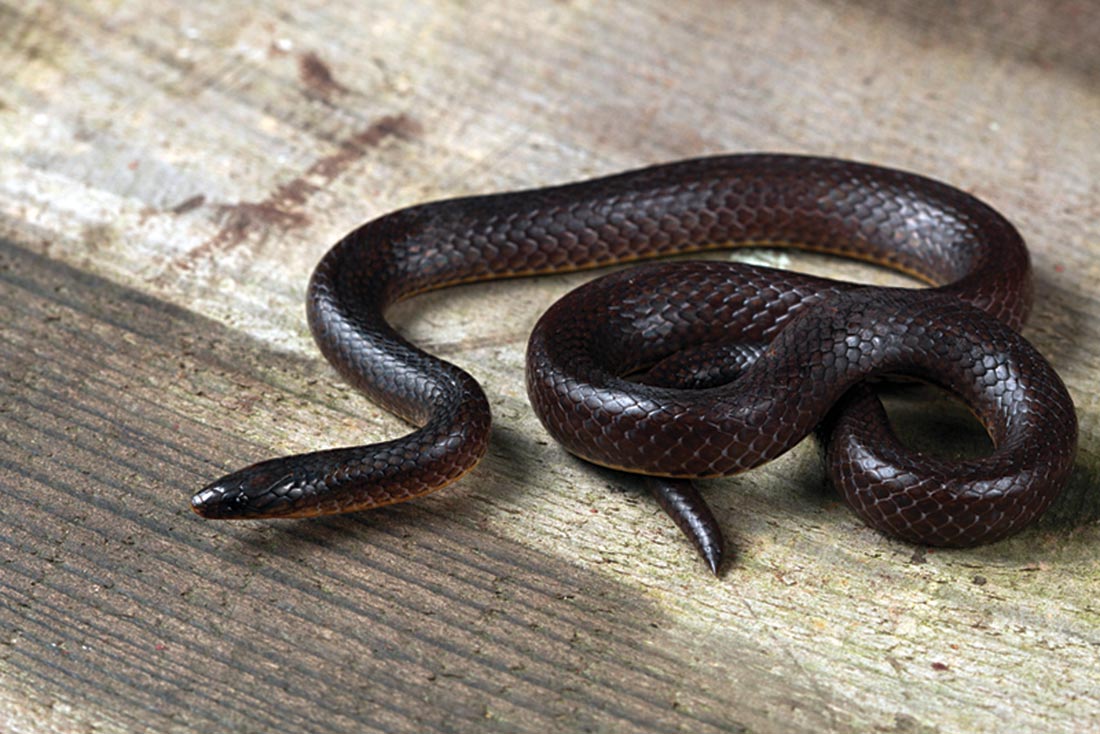 More work is underway to identify other species we found. The trip turned out to be beyond successful, with us having discovered three new snake species, two new lizard species and a new genus of skink! That a short survey by a team of just five members, covering relatively few places across this state could lead to the discovery of so many interesting species, suggests that the area desperately needs more surveys, more studies and greater protection from the hastily planned infrastructure projects proposed in Arunachal Pradesh. It would be a national and global tragedy if we lost the biodiversity of this natural wonderland, even before species were discovered, identified and understood.

Zeeshan Mirza A biologist based at the National Centre for Biological Sciences, he is interested in the evolutionary systematics of reptiles and arachnids of India. He has travelled to remote corners of the country to document and describe new species to science.