The Cold Clutch of Death By Snare

A twisted length of metal wire, mounted and framed, hangs on the wall opposite my desk at Wildlife Trust of India’s (WTI) headquarters. It is a wire snare; a reminder of all the dead and maimed animals that I’ve found trapped in such snares in and around protected forests in India. It also reminds me of the exception: of the instance, the only one, where I saw an animal survive a snare’s deadly mischief.

“Macha, you don’t have time for a bath; we have another rescue to attend,” Ajay Giri, my good friend and an expert king cobra rescuer, shouted at me from the front door. We were in Agumbe Rainforest Research Station, Karnataka, just back from an early morning king cobra rescue and I really needed that bath and some breakfast. Ajay knew I wouldn’t turn down a rescue call though, and he was already on his bike.
I hopped on, not without a twinge of hesitation when I learned that the emergency involved a leopard, not a snake. Ajay and I have been snake rescuers for so long that such interventions are second nature for us. This, though, was something of an alien encounter.

We reached our destination, a beautiful farmland bordered by areca nut trees. The leopard had entered a pump room and was trapped inside, unable to climb the smooth, high walls. The area had already been secured by forest guards, who were still busy keeping a crowd of onlookers at bay. I peeped under the pump room door and found the leopard staring back at me, a wrathful gaze from the far corner. A call was made for a trap cage and we waited for the leopard to subside.

Meanwhile, Shaleen Attre, another team member, had managed to sneak a snapshot on her cellphone through the gap under the door. We checked the image – the leopard was a sub-adult, seemingly healthy and with no visible injury. Probably separated from her mother, we conjectured. “Wait… is that a wire around her?” Shaleen said. We zoomed in and could clearly see a clutch wire around the leopard’s hindquarters. A snare. The situation was suddenly more urgent.

The trap cage arrived and was covered with cloth to mimic a cave. It was placed in front of the pump room door and after a prolonged effort we were at the nearest range office with a caged leopard. Our task wasn’t close to over though: the snare was tightly wrapped around the leopard’s hindquarters and the nearest veterinarian capable of removing it under anaesthetic would only reach us by the next morning. We knew that the snare could cause serious damage by then and that the animal, while healthy, could slip into shock without medical attention.

After much debate we decided to proceed with a bit of jugaad: to attempt to remove the snare using our ‘snake sticks’  – smooth, stainless-steel rods with hooks on one end. We tilted the cage up, forcing the leopard’s hindquarters against the side.

Amidst the frenzy of razor sharp claws now directed at us I managed to grab hold of a hind leg; Ajay meanwhile painstakingly worked at the snare with his snake stick. We knew that no anti-venom or medication would help us re-grow a missing digit or hand should something go wrong. After several attempts we managed to hook the snare and cut it using a wire cutter.

The day’s theatre was done; we were left with an old scooter clutch wire as our prize.

Having worked at WTI’s Wildlife Crime Control Division for several years now, I know that wire snares probably pose the biggest challenge in our attempts to curb poaching. They kill more wild animals than any other hunting method – more than poisonings, electrocutions and shootings combined, in fact. 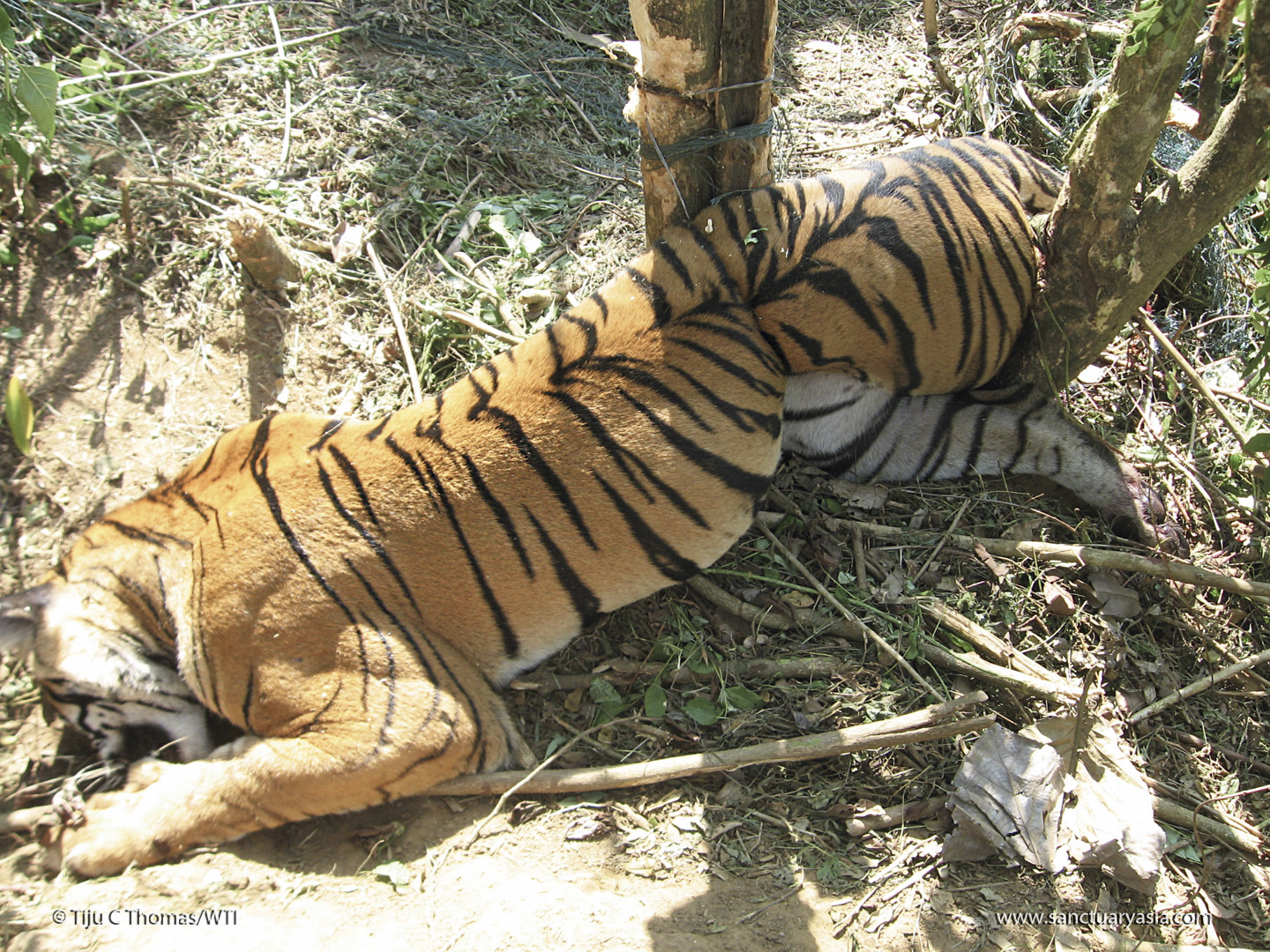 The reason? Snares are cheap and easy to procure. A seasoned huntsman can easily convert a length of GI wire from a discarded electric fence, or a clutch cable from an auto mechanic’s shop, into a deadly trap. All one needs then is to locate a good spot and secure the metal noose. The moment an animal steps through it, and this could be months later, the noose will tighten. And tighten more as the animal struggles to free itself. Once caught, a majority of victims die a slow, painful death. Those that break loose usually have debilitating injuries that get badly infected, impairing their ability to fend for themselves.

A retired bush meat poacher from south India once described the cold efficacy of a snare to me: “We never even bothered to enter the forest,” he said. “We would place our snares on the fringes, particularly in elephant trenches that animals come down into while moving towards agricultural fields. We placed multiple snares in such spots. Then it was just a matter of time before an animal was ensnared.”

Locating snares in forest areas is art and science in equal measure. We realised this back in 2011, when early attempts by WTI, the International Fund for Animal Welfare (IFAW) and the Karnataka Forest Department to weed out snares from Bandipur Tiger Reserve resulted in slim pickings. Nagaraj Bhat, locally revered as the ‘snare man’, was roped in for his expertise and snares soon started surfacing all over the tiger reserve.

Bhatji, by his own declaration, can think like hunters do – which makes him particularly adept at sniffing out locations where snares have been set up. He is also meticulous, mapping removed snares and studying snare deployment patterns to improve the efficiency of our anti-snare operations. From 2011 onwards, over 1,300 wire snares have been removed in and around Bandipur and Nagarahole Tiger Reserves during the Anti-Snare Walks (ASWs) we have conducted with the Forest Department and the Special Tiger Protection Force (STPF). We now run regular training programmes, teaching forest staff to locate and remove snares, log their locations using GPS devices, and create deployment pattern maps using GIS software. In 2017, the success of ASWs by forest staff in Bandipur prompted Karnataka’s Chief Wildlife Warden to issue a notification mandating all range officers to conduct such operations in their areas. Bhatji has gladly joined this expanded campaign and continues to conduct anti-snare training workshops in forest divisions across the state.

As we released the sub-adult leopard back into the wild that mid-November night, I stood atop the cage and watched it dart into the forest. I hoped that it would reunite with its mother, which had been spotted in the area a few days prior. I hoped, but then I felt fear wrap itself like a cold clutch wire around my heart. I thought of the other snares out there in the forest, and that this time the exception would prove the rule.

The snare on my office wall reminds me of that ever present threat.